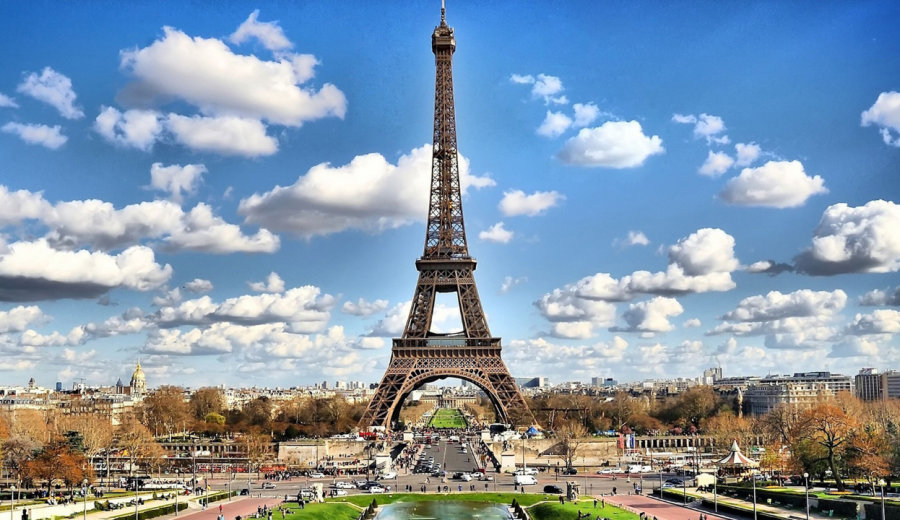 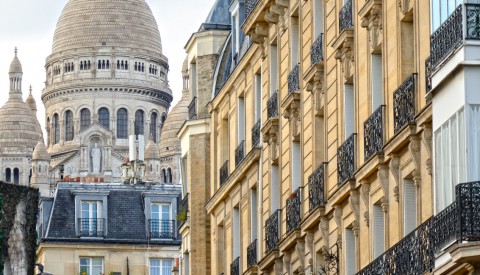 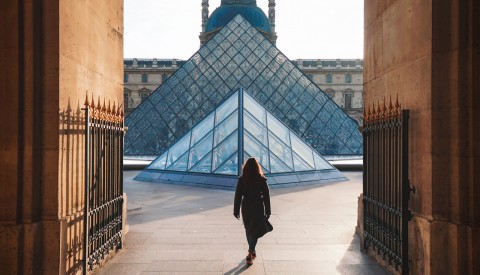 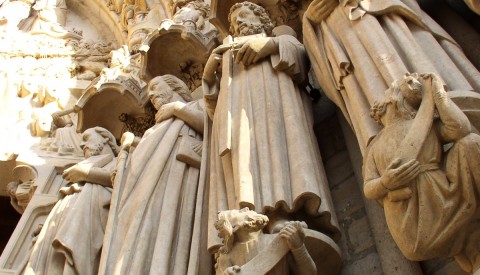 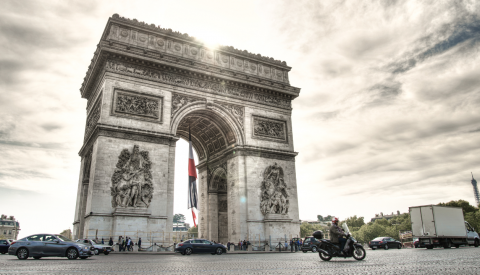 You could spend a lifetime in Paris and never run out of new things to discover. But if you’ve only got a day, leave it to us to give you a Parisian experience that will give you a lifetime of memories. Your Expert Guide accompanies you on a discovery of some of the most influential art and architecture in Western Civilization at the magnificent Louvre, then takes you by car past the medieval masterpiece of glass and color and light that is the Sainte-Chapelle. You walk on hallowed ground, embraced by history and mystery, in the fabled Cathedral of Notre-Dame, then cross the River Seine for lunch in the vibrant Latin Quarter, home to the Sorbonne, Paris' 13th-century university, still frequented by young scholars from around the globe. You follow the tree-lined grand boulevard of the Champs-Elysées past sophisticated shops and elegant boutiques - to Napoleon's mighty Arc de Triomphe and the eternally impressive Eiffel Tower. A trip up to Montmartre brings you to the ever-cheeky Moulin Rouge and the stunningly spectacular Sacré-Coeur, with a breathtaking view over the City of Lights. On our Paris in a Day Tour, you are bathed in beauty as you engage in this very personal discovery of the ideals and accomplishments of the people of this great city across the ages, leaving you entertained, enlightened and inspired.

Paris in a Day

“When good Americans die,” Oscar Wilde once quipped, “they go to Paris.” How lucky we are that we can bask in her glow on this side of Eternity. With so much to see and a limited time to see it, it’s important to make every minute count. That’s where we step in. Our professional Licensed Guide whisks you down avenues and up boulevards for or a full-day chauffeured experience of this extraordinary city, recounting the lives and loves of princes and poets, of revolutionaries and romantics. It’s not just Paris in a Day; it’s a Day in the Life of Paris.

The Louvre: From Mighty Fortress to Royal Palace to World’s Best-Loved Museum

Charles De Gaulle famously had “a certain idea of France.” Arguably, that idea was born nearly a millennium ago at the Louvre. It is the crucible in which the soul of a nation was forged, the sacred shrine that preserves the identity of a people. This is a journey through the centuries, a voyage that brings you face-to-face with the tragedies and triumphs of Western Civilization. You progress through glorious gilded galleries, witnessing the great sweep of history and discovering the intimate stories of individuals. You encounter the grandeur and the grace of Ancient Greece in the shadow of the awe-inspiring Winged Victory of Samothrace and the soft sensuality of the Venus de Milo.

The Renaissance – the French word for “rebirth” – saw a deliberate reaching back to Ancient Roman ideas, ideals, art and architecture. This is on magnificent display in the Michelangelo Gallery, featuring 3 centuries of Italian sculpture that begin with work by the room’s namesake, two Slaves from the Florentine Master’s collection of unfinished works intended for the tomb of Pope Julius II. And, of course, you can’t talk about the Renaissance without mentioning Leonardo da Vinci. The great man traveled to France in 1518, bringing with him a number of paintings, both finished and unfinished. Among these was the portrait of a young woman we know as Mona Lisa. Her hair falls naturally over her shoulders, her neckline unadorned. It is this simplicity that makes her so endearing. But there is nuance, too, a muted playfulness that dances in her beguiling eyes, and the little lift of one corner of her mouth, an enigmatic not-quite-half-smile that has inspired lovelorn poetry and purple prose for more than half a millennium.

Revolutionary France is featured in The Red Rooms. These are home to some of the largest paintings in the Louvre’s holdings, representing some of the greatest moments in modern history, reflected in some of the most inspiring art of the past two centuries. The culmination of Napoleon Bonaparte’s meteoric rise to power and glory is documented in Jacques-Louis David’s massive canvass The Consecration of the Emperor Napoleon. At some 6 feet high and 33 feet wide, Napoleon himself was prompted to proclaim, “One can walk through this painting!”

The emperor’s demise in 1815 brought a tumultuous transition. A metaphor for the wreck of the ship of state was seen in Théodore Géricault’s masterpiece The Raft of the Medusa. Barely a year after the dramatic collapse of the Napoleonic regime at Waterloo, the merchant frigate the Medusa ran aground on a sandbank off the west coast of Africa due to poor navigation. Of nearly 150 people who had set off on a rickety raft hastily built, only 15 survived. Géricault’s ambitious project paved the way that led from the Neoclassical to the French Romantic movement. It certainly inspired the young Eugène Delacroix, who would later mark the imaginations of Europe with his poignant piece from 1830, Liberty Leading the People.

The Gothic Glory of France’s Medieval Monarchy: The Sainte-Chapelle and Notre-Dame

You journey over the Seine and back in time as you arrive on the Ile de la Cité at the very heart of Paris. You will take a moment to admire the dazzling exterior of the Sainte-Chapelle, commissioned in the 13th century by King Louis IX (later to be canonized as Saint Louis). The walls of the upper chamber feature more than 2000 square feet of stained glass, constituting one of the most important examples of this High Medieval art from in the world.

The Sainte-Chapelle is effective preparation for the jewel of Medieval Paris, the Cathedral of Notre-Dame. As you leave the hustle and bustle of the busy city streets behind and enter this sacred space, time seems to move more slowly. The mists of mystery and history are lifted as your Guide illuminates the story of the most famous of all of Europe’s great Gothic churches, from its consecration in the late 12th century to the recent fire that threatened utter devastation. But like the soul of the city she embodies, Notre-Dame still stands tall and proud.

Modern Marvels: The Arc of Triomphe, the Eiffel Tower and Sacré-Coeur

Completing the journey across the Seine to the Left Bank, you’ll linger over quintessentially Parisian fare in the Latin Quarter, home to one of the oldest universities on Earth. After lunch, you’ll be off for a drive up the opulent Champs-Elysées, the leading lady of Paris’ 19th-century Grand Boulevards. This star-shaped, elm-lined network of streets features wine bars, fine dining and some of the most elegant shops and boutiques in the Western world. Standing at the very center of the star is the magnificent Arc de Triomphe, commissioned in the wake of Napoleon’s stunning victory at the Battle of Austerlitz in 1805. More than two centuries later, it continues to represent the determination of a great nation and the resilience of a proud people.

Not far away stands another testament to vision and industry. Firmly rooted in the Earth of History but ambitiously soaring into the skies, the Eiffel Tower is the ideal marriage of form and function, of grace and strength. Once reviled by citizens for ruining the fine line of the city’s horizon, residents today recognize that the Eiffel Tower defines it. Its refusal to hide its identity, to dissimulate its nature, choosing instead to stand up and stand out, unabashedly declaring its dignity and shining its light high into the night sky, is a perpetual inspiration to the people of Paris, and indeed to the population of the planet.

Your journey up the slopes of Montmartre brings you to what was once an outlying area. Home to artists and intellectuals, dilatants, dancers and dreamers, where else could one imagine coming across the famed Moulin Rouge? The birthplace of the Can-Can and Burlesque, the establishment’s immediately recognizable red windmill has gleefully invited visitors to eat, drink and be merry for the better part of a century and a half.

Standing over all of this, surveilling the city from the very summit of Montmartre, is the Basilica of Sacré-Coeur. Initiated in the 1870s, it was intended as an expression of mourning and repentance in the wake of violence and disaster. It is a call to remembrance, to respect for roots, and an invitation to learn from history and forge a path into the future, even in the darkest of times. The view out over the City of Lights is unparalleled. You are above the city, but still a part of it, both embracing and being embraced by it.

This is not merely a tour of city’s monuments and attractions. It is an experience of a day in the life of one of the most extraordinary cities in the world, accompanied by an expert local guide.