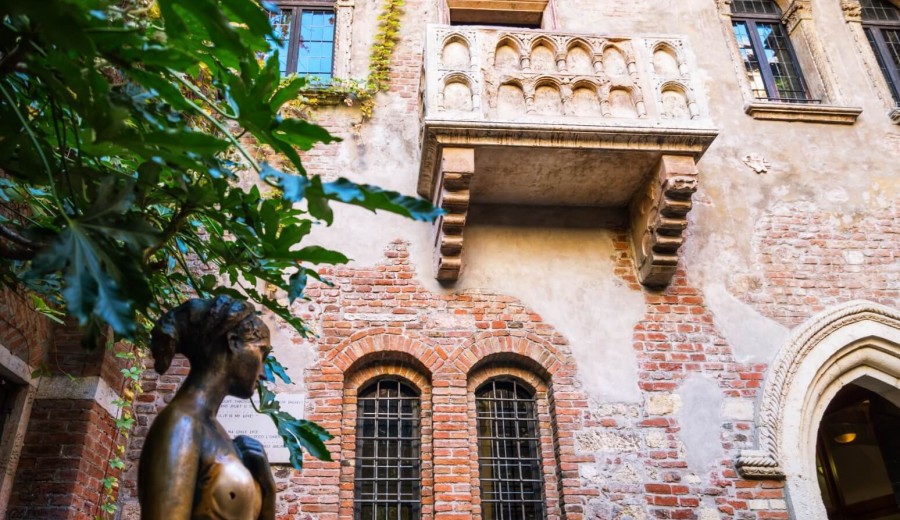 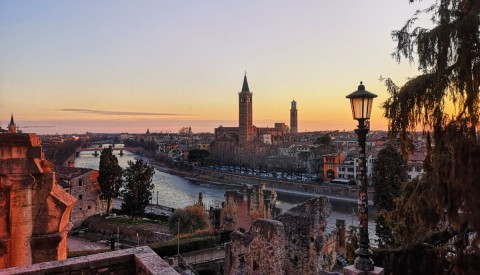 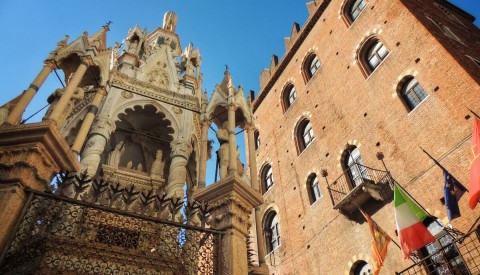 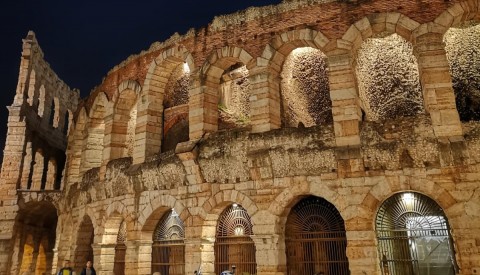 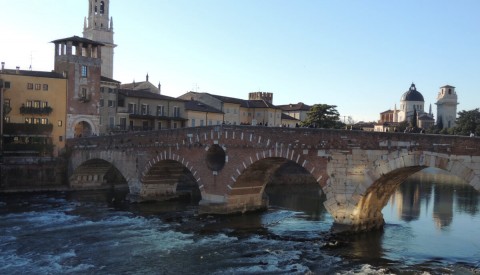 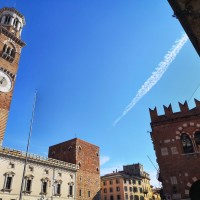 In fair Verona, where we lay our scene…Ok, Shakespeare may never have set foot in Verona, but there’s no shortage of romance and intrigue in the fictional home of literature’s most famous star-crossed lovers. Verona boasts some of Italy’s most impressive ancient landmarks, including its immaculately preserved amphitheatre, as well as atmospheric medieval churches, an iconic bridge and more. Well-heeled Verona is also a haven for foodies, with authentic neighbourhood restaurants and bars showcasing the delights of Veneto cuisine in the city’s tangle of elegant piazzas and cobbled streets. And then there’s the world’s most famous balcony…You’ll see it all in the company of a local expert guide on our Essential Verona tour, carefully crafted to help you see the best of what this beautifully historic city has to offer. Book your Verona experience with us today!

The story of historic Verona extends all the way back to antiquity, when ancient Romans developed the city as a strategic stopping-off point for arduous journeys across the Alps. On your tour of Verona you’ll learn all about why Verona occupied an important place in the landscape of the ancient Roman empire, and how the city evolved into one of the most prosperous cities in Italy during the late medieval period under the powerful patronage of the Della Scala clan. Verona’s historic centre has been declared a UNESCO World Heritage Site for good reason - find out why on our private itinerary!

Chief amongst Verona’s ancient landmarks is the city’s extraordinary amphitheatre, which looms over Piazza Brà. Famous the world over for the bombastic operatic concerts held here every summer, the Verona Arena was constructed from distinctively pink-hued Valpolicella marble in 30 AD and, with a capacity of over 30,000 spectators, was the eighth largest amphitheatre in the Roman empire.

On our tour of Verona you’ll see for yourself why Verona’s amphitheatre is a worthy rival to Rome’s Colosseum (which it predates) - the arena is in a magnificent state of preservation, and gives a vivid insight into the status of the city in the ancient empire. Join us as we follow in the footsteps of the ancient gladiators who fought and died here, making our way through the amphitheatre’s entrance arches and into the vast arena within, where row after row of stone seating soars into the Veneto sky.

Rediscover your inner romantic at the house of Juliet

No visit to Verona is complete without a stop at romantic Casa Giulietta. The fictional home of Juliet is centred around a picturesque courtyard where a bronze sculpture of Shakespeare’s greatest heroine presides over legions of romantics as they pay homage to the power of love in the shadow of the world’s most famous balcony.

The legend of Juliet’s balcony in Verona has entered the cultural consciousness to such a degree that it’s difficult to separate fact from fiction; the Renaissance aspect of the palace (including the balcony) is something of a fudge, remodelled in the 1930s with a liberal helping of fantasy, but the building really was once home to the Cappelletti family, whose coat of arms are carved over the entrance portal. It might seem a bit hokey, but as a testimony to the enduring power of the Bard’s ode to doomed young love a visit to the Casa Julietta is a must on any trip to Verona.

Please note that on our tour we will not be entering the palace itself; the most interesting part of the complex is the courtyard and Juliet’s balcony, which is best seen from the outside. If you would like to include a visit to the interior on your tour, please let us know and we will be happy to arrange this for you - note, however, that it is not possible to skip the frequently long entrance lines.

The fascinating tangle of narrow cobbled streets and sweeping piazzas that characterise Verona’s historic centre is testament to the city’s rise in prominence during the Middle Ages. Elegant Piazza delle Erbe is the beating heart of Verona; the square began life as the Forum of the Roman city, and these days the piazza is home to refined cafes and shops that encapsulate the Veronese dolce vita. It’s a must-visit on any tour of Verona. Look out for the Arco della Costa, an arch leading to nearby Piazza dei Signori festooned with the rib of a whale. According to some accounts the fossil was a souvenir brought back from a crusader after the Battle of Lepanto, whilst others sustain that it originally served as the sign of a local pharmacy advertising their famed curative potions of grated whale.

Spanning the rushing waters of the river Adige, this imposing stone bridge has been ferrying Verona’s citizens across the river since its construction way back in 100 BC. Two of the magnificent arches date from that distant time, while three more are 13th-century replacements - testament to the city’s millennial history. Largely destroyed by retreating German troops in the closing stages of World War II, the bridge was painstakingly rebuilt using stones salvaged from the river over the subsequent decades. As we cross the bridge on our tour of Verona we’ll stop to admire views of the city over the water, and drink in the air of 20 centuries of history.

No story of Verona can be told without paying homage to the powerful della Scala or Scaliger family. Rules of the city during its medieval heyday, the clan was responsible for the construction of some of the city’s most memorable monuments, and famously invited Dante to stay in Verona during his long and painful exile from his native Florence. The series of five tombs that the 14th-century Scailger dukes had erected as their eternal resting places outside the church of Santa Maria Antica are absolute masterpieces of medieval craftsmanship, and are a must-see on a visit to Verona. Discover their story with our guide, including how the all-powerful Cangrande 1st would become Dante’s most famous patron.

Amongst the architectural highlights of Verona, the stunning two-level church of San Fermo is unmissable. On our tour we’ll visit the medieval basilica, whose extraordinary wooden ceiling is a masterpiece of craftsmanship.  No less impressive is the Gothic basilica of Sant’Anastasia - Verona’s largest church, it’s home to an array of beautiful artworks including Pisanello’s charming St George and the Princess and a series of fascinating 14th-century frescoes.

After a long day exploring the best of what Verona has to offer, a pit-stop at one of the city’s innumerable wine bars is practically obligatory. Verona is the home of Valpolicella, one of the most prized wine varietals in Italy. Amarone, a potent Valpolicella made with partially dried grapes, is widely regarded as one of the world’s most prestigious wines, and what better place to taste it than in the atmospheric surroundings of its home city?

Monica was an excellent guide, she knew all the back story about every detail in the city. We absolutely recommend her and Through Eternity as they put together 3 tours for us in three different cities. A deep immersion in a magical city through the expert eyes of a local.... what could be better than that? Great job guys!