On the Trail of Medieval Lazio: A Day Trip to Bracciano, Caprarola and Viterbo

On the Trail of Medieval Lazio: A Day Trip to Bracciano, Caprarola and Viterbo 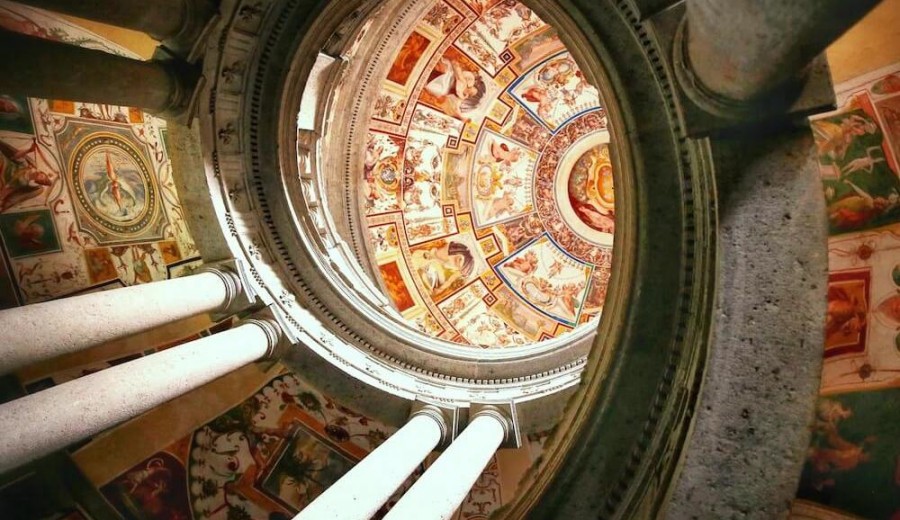 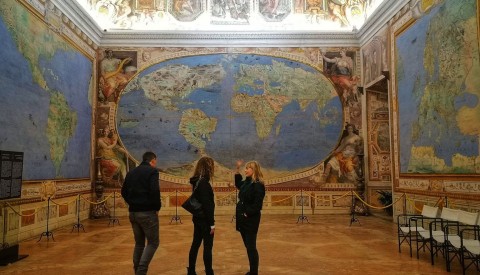 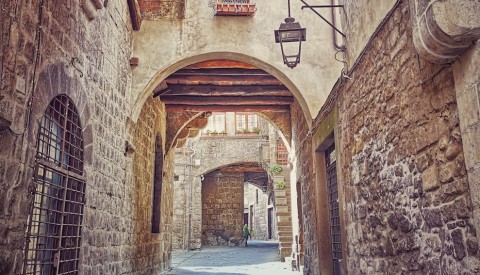 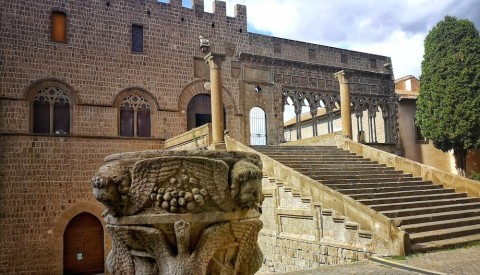 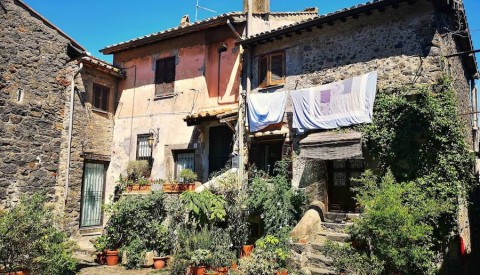 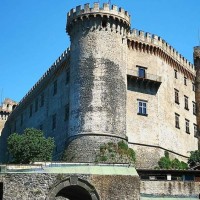 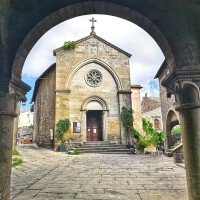 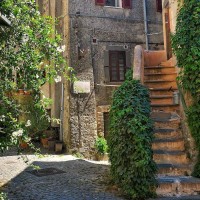 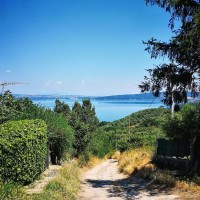 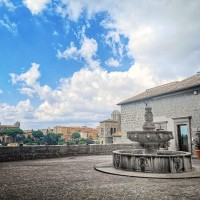 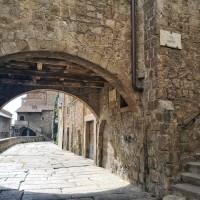 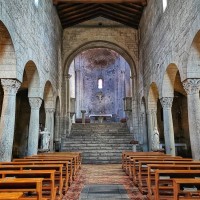 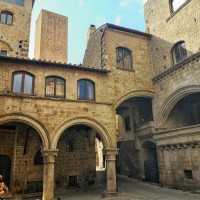 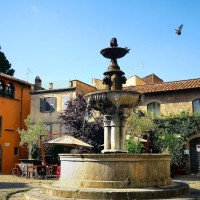 Escape the crowds and discover some of Italy’s most intriguing and overlooked corners on our special day trip to Bracciano, Caprarola and Viterbo. Immersed in the verdant countryside of Northern Lazio, the ancient Tuscia region was home to the Etruscans in antiquity and remains almost unknown to international visitors. But its stunning patchwork of medieval towns are jewel-boxes of fabulous artworks, intriguing history and breathtaking scenery just waiting to be discovered in the company of one of our knowledgeable expert guides – a perfect day trip from Rome!

You'll begin your day with a private car transfer from your hotel to picturesque Bracciano, a warren of medieval alleys overlooking the crystalline waters of a volcanic lake. Bracciano is renowned for its truly spectacular castle, one of Italy's most thrilling Renaissance landmarks where jaw-dropping panoramic views and perfectly preserved frescoes are the order of the day. A world away from the chaotic bustle of Rome, Bracciano is the ideal tonic if you feel you need of a change of pace from the capital.

After a stop for lunch in a traditional restaurant in the shadow of the castle’s ramparts, we’ll head to the equally fascinating town of Viterbo a little further to the north. Known as the Città dei Papi, it was here that the Popes called home when Rome was in the midst of urban decline in the 13th century. Relics of those distant glory years stud the sleepy historic centre today. Walk in the footsteps of the pontiffs through the echoing halls of the Palazzo dei Papi, whose elegant arched loggia is an architectural delight, and learn the bizarre tale of the longest papal conclave in history - resolved only after three years of deliberation when the locals resorted to removing the palace’s roof in order to be rid of the cardinals. A rich array of imposing churches, tinkling fountains and picture-perfect vine strewn alleys, Viterbo’s charming medieval quarter is one of the best preserved in all of Europe.

Explore one of Italy's most spectacular Renaissance palaces in Caprarola

The final stop on our tour through Tuscia is nearby Caprarola. Picturesquely nestled in a spectacular range of volcanic hills, Caprarola is home to the jaw-dropping Villa Farnese. A massive fortified palace dominating the surrounding countryside, the unique pentagonal design was the brainchild of Renaissance genius Antonio da Sangallo – forget the Arlington version, this pentagon was around 400 years before ground was broken at the DoD! The spectacular interiors are covered with incredible frescoes recounting the deeds of the Farnese clan, as well as extraordinary 16th-century world maps in the Sala del Mappamondo. The elegantly twisting central Scala Regia is one of the most stunning spiral staircases ever constructed, and the leafy gardens outside are a refreshing delight.

The Villa Farnese in Caprarola is perhaps Italy’s single most impressive hidden gem, and is the perfect way to conclude this special off-the-beaten path itinerary. Afterwards your private driver will accompany you back to Rome, just an hour away but truly another world! Medieval towns, glittering lakes and magnificent Renaissance monuments - this special tour will take you to a magical part of Italy where art, culture and nature come together in wonderful harmony. Leave the tourist trail far behind and discover it with Through Eternity today!

We saw this day trip offering on the TE website before coming to Rome and were intrigued. We never seen this kind of day trip before on any other tour group site. We then asked about this day trip with our TE Tour Guide Gracelyn during our Colosseum Underground Tour in our first week in Rome. Her enthusiasm convinced us to do it, and we were able to book the day trip for the following week and with Gracelyn as our tour guide, as we requested. Thank you Through Eternity! This tour was grand, and we would highly recommend this to anyone interested in leisurely seeing the Lazio countryside, visiting and enjoying some beautiful small Medieval towns, and learning a little bit of Medieval Lazio and papal intrigue. And the three visited towns are indeed beautiful! This is a private tour involving my wife and I, our tour guide Gracelyn and our driver Danielle. Just the four of us! We were promptly picked up at our apartment in the Centro Storico of Rome at the designated time of 8:30am, and off we went. If was a little over an hour drive to our first destination of Caprarola to visit the fabulous Palazzo Farnese. Along the way, we talked about many things like Roman cuisine, hidden gems in Rome for future reference, the Lazio countryside, the influence of the Popes in the past Italian history, the Farnese Family, etc. The 1-hour-plus drive flew by with these many very interesting discussions. Once we got to Caprarola, wow, the Palazzo Farnese just dominated the townscape! Once inside, the opulence and the art were mind blowing. Renaissance frescoes everywhere! Moreover, no people! We were about the only ones in this grand Palazzo! And we had Gracelyn to ourselves to ask the many questions that are inspired from being in such a magnificent place. After the Palazzo were the beautiful gardens! What next - well it was the picturesque Viterbo, a definite hidden gem in the Lazio countryside, and home of the Palazzo dei Papi, and enclosed with still-intact Medieval walls built in the 11th and 12th centuries. First stop was the Red Rose Caffe, a coffee bar run by ladies where we had a nice cappuccino before making our way on foot to the 12th-century Cathedral of San Lorenzo and the 13th-century Palazzo dei Papi. Here in the Palazzo dei Papi is where the college of cardinals back in 1271 had their first and longest enclave to elect a new pope. In fact, the original 1271 document can be viewed in the Palazzo! Again, no crowds and very few tourist! After the viewing, we had a very nice lunch outside at a family run trattoria called Il Gargolo. Thank you again, Gracelyn, for bringing us to an authentic Viterbo eatery where we were the only English-speaking people. After lunch, we requested to do a little shopping for ceramics that is a notoriety in Viterbo. Gracelyn obliged, and we found some beautiful ceramics that are signature to the area. One last stop and not the least stop - Bracciano and the well-preserved Medieval Orsini-Odescalchi Castle that sits above the splendid Lake Bracciano. What spectacular panoramic views from the castle of this round volcanically formed lake! The Orsini-Odescalchi Castle is one of the most noteworthy examples of Renaissance military architecture in Italy! Again, no one but ourselves at this 3rd Lazio gem! We enjoyed stomping through this empty castle. It also has a museum of ancient weapons that we found very interesting, particularly in their presentation. Lastly, it was where Tome Cruise and Katie Holmes had their wedding. We have come to the end of a most wonderful day, 8 hours in all! And an hour drive back to Rome with again delightful discussions with our tour guide Gracelyn and our patient and wonderful driver Daniele. This was the best day trip from Rome ever, and we highly recommend it! It was and is indeed a hidden gem!

Renata started out by asking what we knew and listened carefully. She filled in our knowledge gaps, without repeating unnecessarily what we’d learned in past trips to Italy. She gave us great context for our unusual itinerary and was a delightful travel guide and companion.