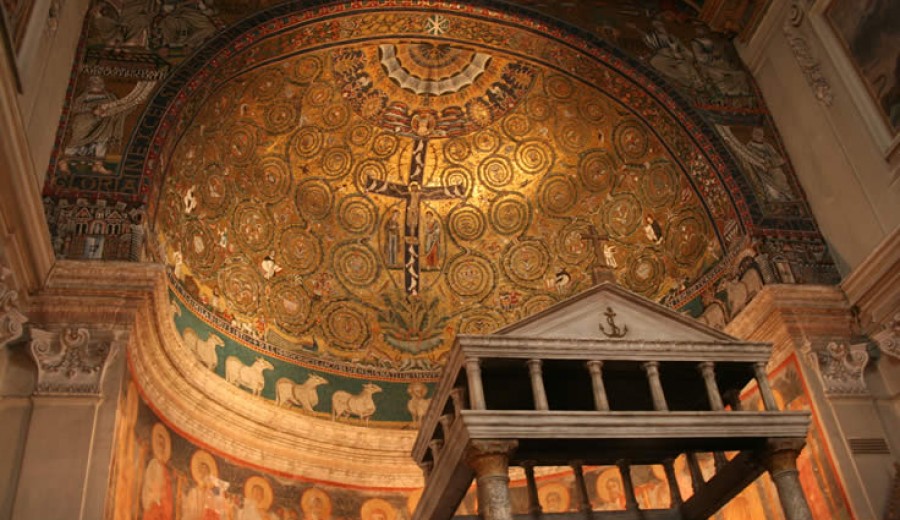 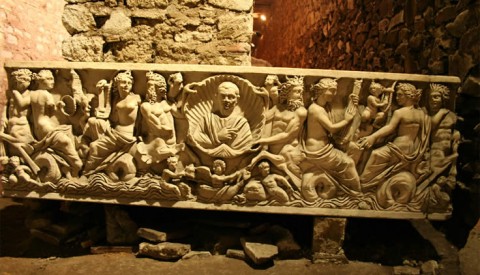 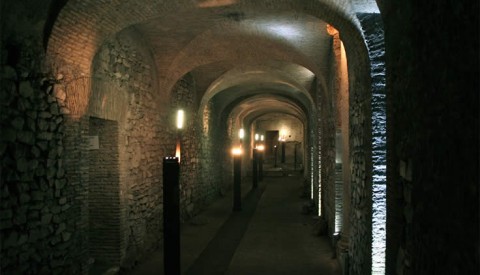 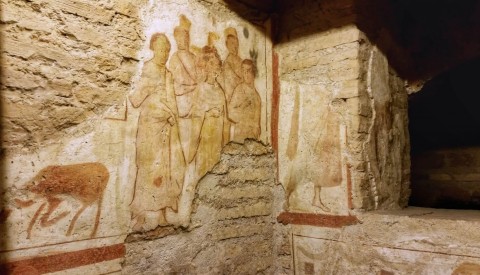 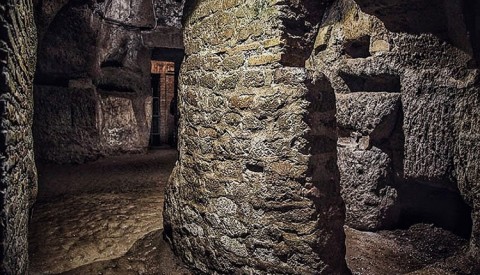 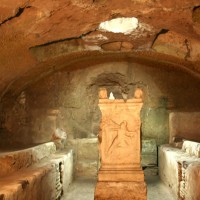 What lies beneath? As you wander through the atmospheric streets of Rome, it's hard to imagine that an array of treasures lie hidden under the ground beneath your feet. Join our private Underground Rome Tour by car to delve into a forgotten world of labyrinthine catacombs and haunting underground churches, ancient pagan temples and beautiful Roman houses – in Rome you're walking on history with every step. One of our expert private guides will be on hand to lay bare the mysteries of these extraordinary and unexpected subterranean spaces, and you'll also have a private car and driver at your disposal so you can move between the sites in comfort. Join us to discover the lost faces of Ancient Rome and the early Christian world miraculously preserved under the modern city!

Descend into the eerie world of underground Rome

It's a safe bet that you're probably going to visit the Colosseum, the Roman Forum and other famous sites on your trip to Rome. But what if we told you that there’s an entirely different and fascinating city waiting to be discovered, buried under the streets where you'll be walking each day?

On our Underground Rome tour we'll descend below street level and explore incredibly well-preserved buildings from the ancient and early-Christian periods, once again accessible today thanks to meticulous archaeological excavations.

A simple truth underpins all archaeological discoveries: to unearth evidence of the past you have to dig downwards. Over the course of the last 2,000 years Rome’s street level has been consistently getting higher and higher, for two main reasons. The first concerns the river Tiber that flows across the city and to whose vital life-giving water Rome owes its foundation. The unruly torrent has burst its banks countless times over the centuries, and the resulting floods have often had devastating effects on the city - destroying buildings and covering their ruins with thick layers of mud.

Secondly, when fires, floods and earthquakes levelled buildings, Romans naturally chose the easiest and cheapest way to rebuild the city - rather than clearing the sites, they simply erected new edifices atop the smouldering ruins. And the same goes for archaeological sites all across Italy.

As a result, hundreds of structures ended up buried under countless tonnes of dirt and rubble - buried  but at the same time wonderfully preserved for us! Can you imagine the amazement of the archaeologists when they found entire buildings, almost intact, trapped under tons of dirt? Are you ready to experience the same thrill today?

On our guided tour we’ll travel back in time to see visit buildings dating back to the time of Christ and the first centuries of the Christian world, still fabulously decorated with the same mosaics and frescoes even now – all buried below medieval and Renaissance structures that literally sit on top of them!

With the engaging commentary of our archaeologist guide, you’ll have the opportunity to recreate the daily life of the Romans over the course of the centuries, catching a glimpse of what their lives must have been and how it changed over time - sometimes drastically.

We’ll trace this story from the high-times of empire when the city of Rome boasted a multi-ethnic population of over one million inhabitants to the difficult era of decline ushered in by Barbarian invasions that broke the empire’s invincible power; we’ll learn about the city in the Middle Ages, when Rome was in reality nothing more than a small village of 20,000 people ravaged by wars and plague, and finally the new splendor of the Renaissance, when the city rediscovered its glorious past.

The Catacombs of Santa Domitilla is one of the largest and most interesting Christian underground cemeteries in Rome. The oldest section of this huge complex dates back to the 2nd century AD, making it one of the most ancient of Rome’s catacombs (although only five are currently open to the public, there are more than 60 of these sites buried beneath the city).

Little is known about who Domitilla actually was: according to tradition and the few documents that mention her name, she lived in the 1st century AD and was probably a rich aristocrat, maybe even a relation of the emperor Domitian, who ruled Rome from 81 to 96 A.D. Christian tradition asserts that she was married to one Flavio Clemente, a cousin of the emperor. When Domitian found out that the couple professed the Christian faith, he exiled Domitilla to the isolated Pontine islands and executed her husband in 95 A.D. According to many inscriptions found in the catacombs, the land where they were built once belonged to Domitilla, who donated it to the Christian community before her exile.

On our tour, you’ll descend into a unique Underground Basilica built in the 4th century in memory of the martyrs Nereo and Achilleo, two soldiers who were put to death by the emperor Diocletian because they refused to renounce their faith, and whose remains were buried in the catacombs of Domitilla. From there you will explore the tunnels of the Catacombs, passing thousands of ancient burials plots - from the loculi, simple graves carved into the rock for poor Christians, to elaborate family chapels where the wealthy buried their family members surrounded by beautiful paintings and carvings.

Amongst the highlights of our guided visit are some of the oldest examples of Christian art in Rome, like a famous 4th-century fresco depicting Santa Petronilla - according to ancient Christian legend Petronilla was none other than the daughter of Saint Peter himself.

Descend into the 3 underground levels of San Clemente

After almost 2,000 years, the true identity of Saint Clement is still controversial: he has been variously identified as the fourth pope in the line of succession from St. Peter and as the same Flavio Clemente who was married to Domitilla and died as a martyr during Domitian’s reign. Whoever he was, Rome’s Christians honored his memory with an incredible building: the church might not look that impressive from the outside, but as soon as you pull open its ancient doors it will take your breath away.

In the apse of the church a magnificent 12th-century golden mosaic glitters and sparkles, representing the crucifixion of Jesus in a highly symbolic and idiosyncratic manner – instead of a manmade cross, Christ hangs on the Tree of Life whose twisting branches and vines promise eternal salvation for the faithful.

In Saint Catherine’s Chapel meanwhile, we will admire beautiful 15th-century paintings, the work of early-Renaissance dream team Masolino and Masaccio, who also frescoed the wonderful Brancacci chapel in Florence. Here their work depicts the life story of one of the most revered saints of all, culminating in her tragic martyrdom and death on the wheel that bears her name today.

Then our expert guide will take you down a little staircase, and you’ll find yourself in a completely different world. This is an ancient 4th-century church dedicated to Saint Clement buried right under the floor of the medieval basilica. Accidentally discovered in the 19th-century by an Irish Dominican friar who lived in the convent next door, the buried building turned out to be the original Saint Clement’s Basilica, abandoned after the devastating Norman invasion of 1084. The sacked church was in such poor condition that the new Pope Paschal II decided to simply fill it up with dirt and rubble and build a new church on top!

But the story of San Clemente doesn’t end there. Descend another staircase and we’ll find ourselves in two more buildings buried even deeper into the earth. One was probably a private house from the 2nd century A.D., and houses an incredibly spooky pagan temple dedicated to the eastern bull-slaughtering god Mithras. The other building, even more ancient, was possibly a 1st century mint.

Wander through the Roman Houses of Saints John and Paul

Discovered in 1887 by Father Germano di San Stanislao right under the medieval church dedicated to the obscure Roman saints John and Paul, the Roman Houses provide an extraordinary insight into daily life in the ancient world. This amazingly preserved complex consists of two separate Roman houses that date from 2nd and 3rd centuries A.D. which were eventually unified to create an enormous villa.

The most fascinating aspect of this extraordinary site is its incredible decorations – the magnificent paintings that adorn the villa’s walls vividly demonstrate the transition from paganism to the Christianity that was occurring in these very years in Rome. Stunning frescoes depicting pagan deities sit side-by-side with Christian images that represent the martyrdom of saints John and Paul, who, according to legend, lived and died in this very house.

On Tuesday and Thursday afternoon, instead of the Roman Houses of Saint John and Paul you will be visiting the beautiful Basilica of San Crisogono, in the charming neighborhood of Trastevere.

So now you know what to expect, join us on what has been one of our most popular Rome private tours over the years and get a unique and fascinating insight into a rarely seen side of the Eternal City!

You will meet your guide in front of the entrance of Basilica San Clemente.

I lived in Rome for several years, many years ago, and thought I knew the city fairly well. Caterina showed us new and different places and was an amazing source of information and insight. The grandparents (in our 70's) as well as our 19 year old grandson were thrilled with our experience. Caterina was great, this tour was well thought out and put together flawlessly! Thank you Through Eternity Tours - we hope to see you again!

Eugenia was an amazing guide and extraordinarily knowledgeable. She was passionate about her subject and imparted such meaning to the history and and did so in an entertaining way. We were so pleased with our tour and highly recommend her.