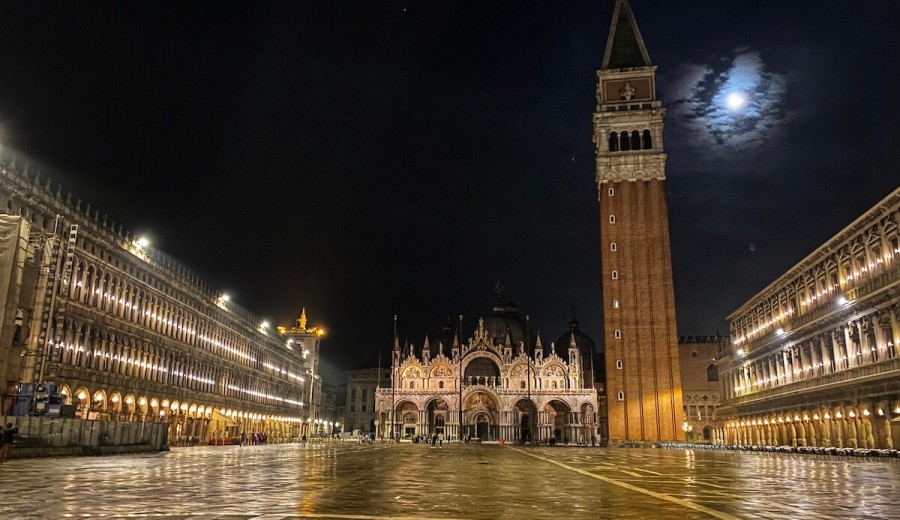 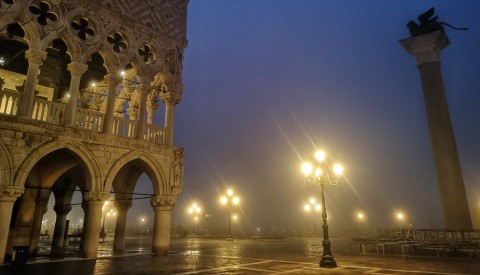 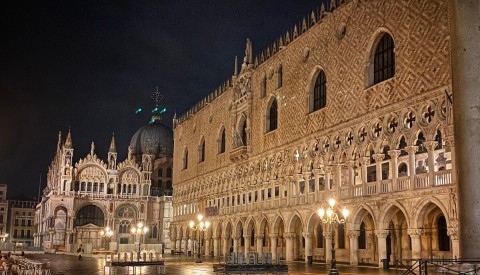 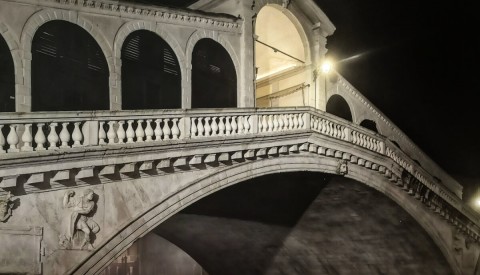 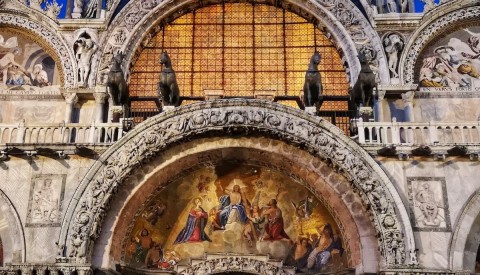 Discover why Venice’s St. Mark’s Basilica is one of the world’s most spectacular churches on this special private itinerary. Visit the stunning cathedral after hours with our expert local guide, and come face-to-face with the magnificent treasures of the Golden Church. We’ll begin our tour at the iconic Rialto bridge before heading to sweeping Piazza San Marco, brilliantly illuminated in the moonlight. Learn why this square is known as Europe’s drawing room, and enter the massive basilica to be transported into a glittering world of gold. Admire San Marco’s spectacular mosaics and learn all about the priceless artworks within, including an exclusive visit to the church’s eerie crypt. Our St. Mark’s at Night private itinerary is a unique chance to see Venice’s most iconic landmark without the crowds - discover it with us!

Please note this tour is only available on Tuesday and Saturday evenings!

Visit St. Mark’s Basilica after hours and leave the crowds behind

The most important monument in Venice is undoubtedly magnificent St. Mark’s basilica, the most recognisable symbol of the city for over a millennium. A visit to the cathedral is a must on any trip to Venice, but the long entrance queues and waves of tourists thronging the church can make for a stressful experience. On our exclusive private night tour of St. Mark’s basilica we’ll leave the crowds behind and head straight into the church after it’s closed to the general public.

Only a very limited number of companies are accredited to offer these exclusive visits,  meaning that you’ll have San Marco largely to yourself on your private tour. We’re convinced that this is the best way to see the basilica, giving our clients the unique opportunity to admire the treasures of San Marco in peace - book your tour today and we're sure you’ll agree!

But there’s more to our exclusive tour of Venice than St. Mark’s We’ll begin our evening at the nearby Rialto Bridge: one of the most extraordinary landmarks in the Floating City, the iconic bridge is the most important crossing of the city’s Grand Canal, ferrying thousands of locals and visitors across the city each day. Learn the story of the beautiful bridge from our resident expert, and discover how its spectacular arches are particularly impressive bathed in moonlight.

Take a stroll through St. Mark’s Square at night

From the Rialto bridge we’ll stroll through one the most atmospheric parts of Venice before emerging from the narrow tangle of canals and alleys into the city’s largest public space. Napoleon described the Piazza as the ‘drawing room of Europe’ with some justification, and the elegant old-world cafes and restaurants that line the square’s arcades have stood at the heart of social life in the Serenissima for centuries. Your guide will explain the significance of the square to the history and geography of the city, which as home to the Doge’s Palace and St. Mark’s cathedral is the historic  spiritual and political centre of Venice.

During our time in the piazza we’ll learn about some of the other highlights on show here, including the stunning Torre dell’Orologio - a Renaissance clock tower decorated with fabulous sculptures, as well as St. Mark’s Campanile, the soaring 12th-century brick bell tower that is still the tallest building in Venice. But the real highlight here is, of course, St. Mark’s itself. Dominating the far-end of the piazza with its dazzling array of domes, arches and turrets, the sight of Venice’s cathedral illuminated in the moonlight is one you will never forget.

Widely regarded as one of the most beautiful and important churches in the world, St. Mark’s Basilica is an extraordinary fusion of architectural styles and traditions. Natives of Venice often like to say that their city is where the worlds of East and West meet, and nowhere is this better demonstrated than in the design of St. Mark’s. Begun in the year 1063, the vast church showcased the increasing importance of the Serenissima as a powerful city-state with global reach - its array of domes, vaults and arches are a mix of Romanesque and Byzantine elements, with strong influences too from the Islamic world. On our night tour of St. Mark’s, your guide will unravel the complex history of the church over the centuries.

To get to grips with the story of Venice you need to get acquainted with Saint Mark, and on our private tour of San Marco we’ll be delving into the backstory of the city’s revered apostle. Find out how local bishops invented an ancient affinity with Saint Mark in the 8th century, and learn the fascinating story of how Venetian merchants pilfered the apostle’s body from its resting place in Alexandria in an audacious theft a century later.

The story goes that a Venetian fleet was forced to seek shelter in the Muslim-controlled city during a terrible storm. Taking advantage of this twist of fate, the Italian sailors determined to smuggle the body back to their homeland concealed in a barrel of pork fat. The ruse worked, and the relics of the apostle were welcomed by the bishop and doge of Venice in a solemn ceremony. Venice finally had its patron saint. As you enter the church you’ll come across a series of amazing immortalising the daring robbery.

Gaze on the glittering mosaics of Saint Mark’s basilica

From the piazza we’ll enter the basilica via a special entrance accessible only to visitors on a night tour of St. Mark’s. As the church is usually closed to visitors at this hour, when we enter the church will be cloaked in darkness. As the lights are turned on one by one and the church’s mosaics emerge dramatically from the gloom, the full majesty of St. Mark’s basilica will be revealed in all its glory. The basilica’s dazzling mosaics extend over more than 4,000 square metres, and this jaw-dropping expanse of gold has for obvious reasons conferred upon St. Mark’s the nickname of the Church of Gold.

On our tour you’ll learn all about the complex iconography of these mosaics, the intricate techniques employed by the artisans who crafted them and the seismic impact they would have on the story of medieval art. From the oldest mosaics created in the 11th-century to the masterpieces of medieval craft produced here in the high Middle Ages and later designs dreamed up by masters of Venetian art like Tintoretto and Veronese, Saint Mark’s jaw-dropping interior offers up a glittering cross-section of Venetian culture like nowhere else.

Admire the Pala d’Oro and the Iconostasis

Although the mosaics are the most famous artistic masterpieces in St. Mark’s Basilica, there is a lot more to discover in this treasure-trove of Venetian art. On our private tour we’ll have the chance to get a close-up look at the incredible Pala d’Oro - a 12th-century altar crafted by artisans from Constantinople that is widely regarded as one of the finest Byzantine artworks in existence. Studded with a bewildering array of precious gems and stones and decorated with beautiful enamels, the Pala d’Oro captures the spirit of Venetian spirituality at its most profound. On our St. Mark’s at night tour we’ll also get to admire the stunning 14th-century iconostasis, a masterpiece by Jacobello and Pierpaolo Dalle Masegne.

Descend into the basilica’s atmospheric crypt

To conclude our tour we’ll have the rare chance to descend into the cathedral’s atmospheric crypt. Usually closed to visitors and accessible only on a special night tour of the basilica like this, as you make your way through this atmospheric subterranean space you’ll feel like you’ve been transported back in time to the distant world of medieval Venice. The crypt was constructed from the remains of the old St. Mark’s that was destroyed to make way for the current structure in the 11th century, and when the body of Saint Mark arrived a few decades later it was interred here. A series of devastating floods over the centuries damaged the crypt, and we’ll see evidence of this as we explore the underground of the basilica. It was here too that the patriarchs of Venice were buried, and on our tour we’ll see their stone tombs amidst the crypt’s gothic vaults.

Whether you have hurried through the dazzling interior of the Basilica of San Marco in Venice jostling with tour groups, or only admired the remarkable exterior from the piazza, this night-time tour will be a revelation and a privilege—especially if you can manage a private visit, accompanied by the knowledgeable and charming Giovanna. This is a transcendent and spiritual experience—whatever your religious convictions, if any. To be (almost) alone inside this vast sacred space, with time to look closely at the innovative architecture and spectacular mosaics lifts us out of the ordinary and into an extraordinary realm of history, culture, and beauty. It’s almost overwhelming. Almost. Which is why having a personal guide like Giovanna is so rewarding. O have never been disappointed by a TE tour, in person or virtual; but this tour is incomparable.

We started the vening by meeting Giovanna exactly where she said she'd be and sterted with a brief history of the Basilica. From there we entered the Basilica and got a detailed tour of the beautiful artwork at the entrance. We then took seats, the Basilica went dark and we were able to experience the aura of the church being relit bit by bit. The balance of the tour was just amazing but the best part was being able to tour the crypt under the alter. Giovanna was personable and engaging, filling us with great information while keeping us entertained with her stories. The whole experience was wonderful!