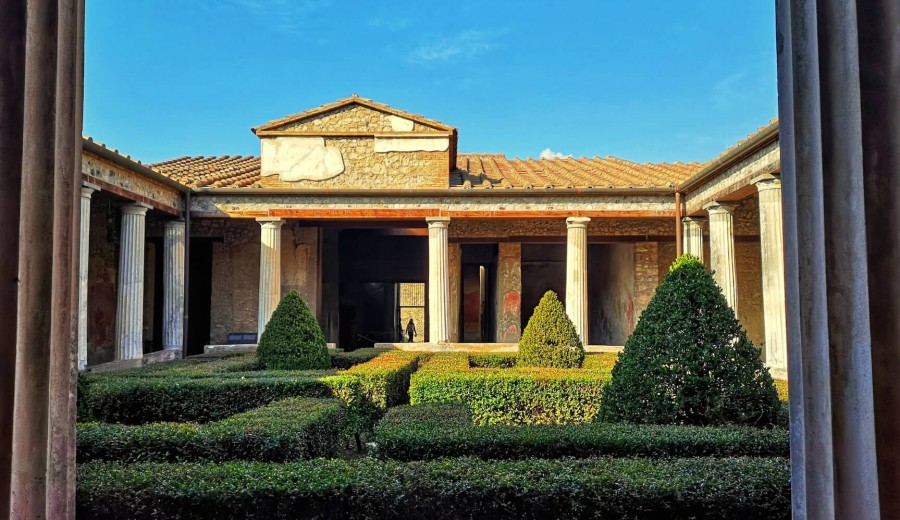 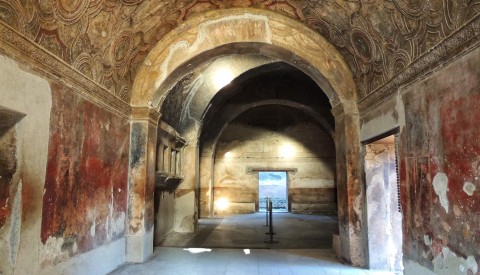 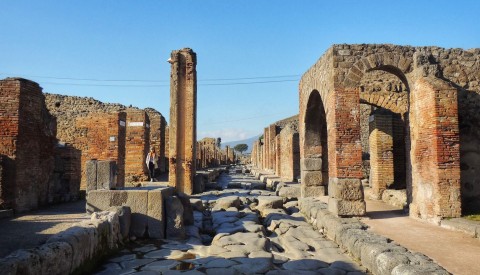 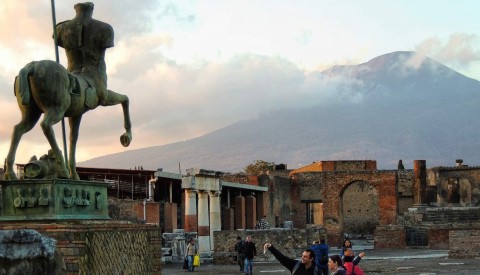 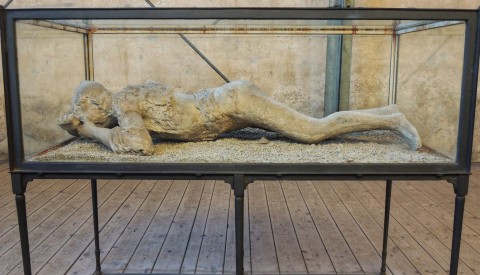 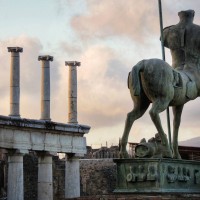 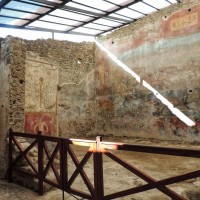 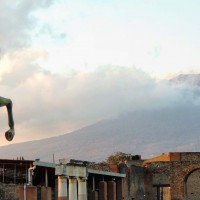 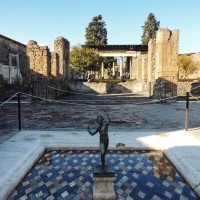 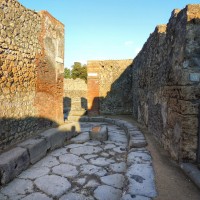 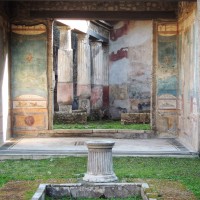 duration 6 hours including a lunch break

Walk in the shadow of death and explore the extraordinary remains of Pompeii beneath looming Vesuvius, before climbing the volcano that annihilated the city nearly 2,000 years ago. Join us on this amazing journey to decipher the jigsaw of ancient Pompeii, and wander through the perfectly preserved streets, houses, shops and baths that have hardly changed in two millennia. With our expert local guide on hand to bring the ruins to life, you’ll feel like you’ve travelled back in time to the evening before disaster struck. Afterwards your English-speaking driver will take you to spectacular and dangerous Mount Vesuvius - still an active volcano even today. Here you’ll have the option to join the resident volcanologist’s tour, discovering exactly what happened on that fateful day in 79 AD. This is one exciting adventure not to be missed!

“On Mount Vesuvius, broad sheets of fire and leaping flames blazed at several points, their bright glare emphasized by the darkness of night.”

That’s how Pliny the Young beautifully describes the tragic events that took place in between August 24th and 25th AD 79: even the writer’s uncle Pliny the Elder, together with thousands of other people, lost his life during those terrible moments.

The eruption lasted several hours and started pretty slowly in the morning of August 24th, AD 79. Around 9:00 AM the Pompeians started hearing a few small explosions coming from the Mount Vesuvius, which got progressively louder and more destructive over the course of the day and the night: by 8:00 PM of the next day, Pompeii was buried under 3 meters of lava, together with its unfortunate inhabitants.

But what was Pompeii like before the catastrophe? Interestingly enough, the city was already some 900 years old when the volcano destroyed it. Founded by the Osci people in the VIII century BC, Pompeii was probably born out of the fusion of five original villages: the name itself, in fact, very likely comes from the Oscan world “pumpte”, which means five. In the 3rd century BC the city was conquered by the Romans, who shaped it into a perfect roman city, complete with efficient roman roads, luxury baths, the forum, a theatre and an amphitheater for gladiatorial shows and so on.

At the time of the eruption Pompeii was a flourishing roman city, thriving on commerce and celebrated for its delicious wine and tasty olive oil. Appreciated also for its mild climate and for the proximity to the sea, Pompeii was also a popular holiday place, particularly appreciated by the families of the roman aristocracy, as witnessed by the amazing rich villas that are still preserved, embellished by magnificent and precious art.

Sealed under 3 meters of lava and pumice stone, Pompeii slept, stuck in the terrible moments of the eruption, for 1600 years: it is only in 1763 that the excavations started and, to the archaeologists’ greatest amazement, the entire city slowly emerged from the ashes, practically intact. And it isn’t quite over yet: as the excavations keep going in other areas of the site, Pompeii still keeps surprising everybody with new amazing discoveries.

Explore  Pompeii with us, visit its houses, villas, shops, bars, thermal baths, market places, even brothels and discover many aspects of the roman lifestyle: take this once in a lifetime chance to see life through the eyes of a Roman, you might be surprised to discover that, even after 2000 years, people haven’t changed that much.

Every building you will be visiting will provide you with sometimes unexpected insight on a different dimension of the roman society. While in the rich houses decorated with spectacular paintings inspired from the mythology you will learn about the Pompeians' exquisite taste for art, in the temples, some of them dedicated to foreign gods, you will find out that the Romans were very keen on adopting other peoples’ gods and rituals, thus proving a certain tolerance in the regards of other pagan cults.

Walking in the Forum of Pompeii you will learn about the political and administrative life of the city and its protagonists, senators, magistrates, plebeians and aristocrats. You will find out about the political elections and the intensive campaign in support of the different candidates, the traces of which can still be seen in the Latin graffiti on the walls: Popidium Secundum IIvirum oro vos faciatis, Vote for Popidium Secundum!

Leaving behind the official buildings of the city, you will discover yet another dimension of the Roman lifestyle: you will be amazed by the perfect engineering and functionality of the thermal baths, complete with amazing saunas with special devices to collect the steam, or the incredibly preserved cafés and restaurants, with the menu beautifully painted on the walls.

Which one of the most renowned Roman delicacies would have you ordered? Flamingo’s tongue, grilled dormouse, rotten fish sauce or boar stuffed with living mockingbirds?

At 4,203 feet in height, Mount Vesuvius is by far Italy’s most famous volcano. Considered an actual deity by the ancient inhabitants of the area, the Romans considered it as an expression of Jupiter’s destructive power, while according to other traditions, it was associated to Hercules and to the myth of the twelve labors.

While the most (sadly) famous eruption of the volcano is obviously the one that destroyed Pompeii and Herculaneum in 79 AD, the Vesuvius has erupted multiple times, the last one in 1944, but it’s far from being extinct: will you dare to climb it and look into its impressive mouth?

Join us on this incredible adventure at the discovery of history, archaeology, art, nature and so much more.

Your driver will meet you at your Naples accommodations, cruise port, or train station

We had a wonderful day with Massimo and Andrea. Both superbly helpful and knowledgable. The local flavour and information was outstanding and really brought Naples to life for us. They were flexible with our family and so passionate about the place and history. We highly recommend this tour and our guides.