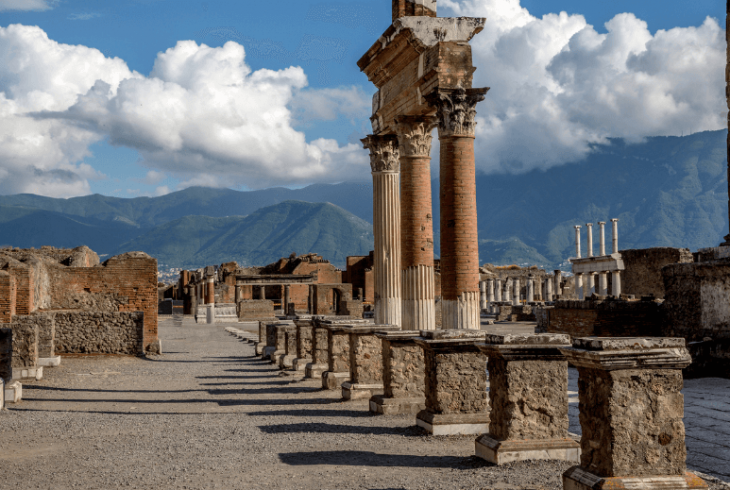 Continuing our countdown of what you need to see in Pompeii, in part two of our illustrated guide we’ll be exploring fabulous private villas rich with priceless mosaics, temples dedicated to mysterious ancient gods and more. In case you haven’t read it yet, check out Part 1 of our guide to Pompeii here!

House of the Faun 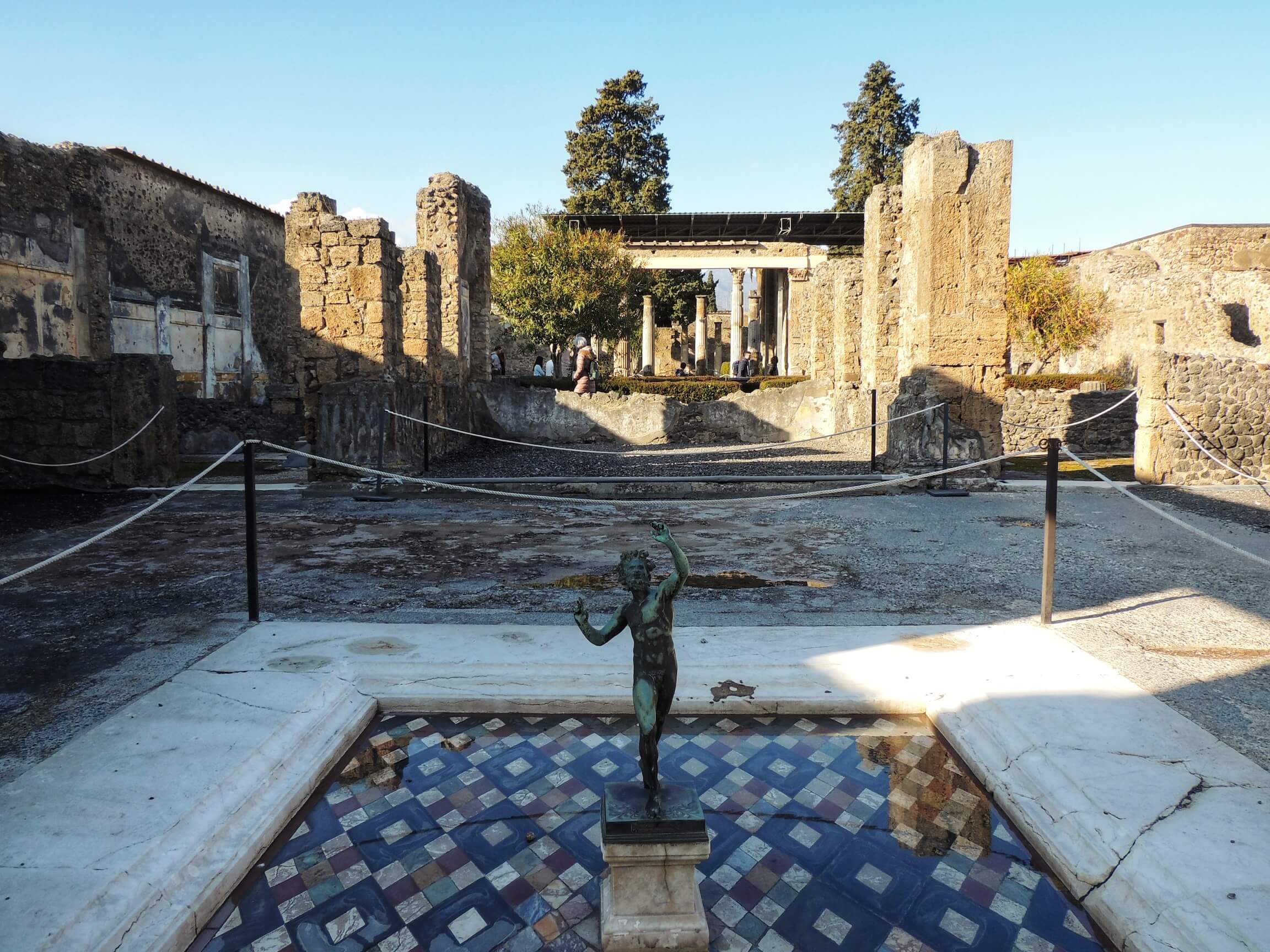 The largest and most opulent residential complex in Pompeii, the so-called House of the Faun occupied a whole city block and was first constructed around 180 BC. The sprawling 3,000 square metre palace takes its name from (you guessed it) a beautiful bronze statue of a Faun presiding over the impluvium - a mosaic-decorated basin that gathered rainwater via a whole in the roof above. In front of the building, a mosaic welcomes visitors with the word HAVE - Latin for greetings.

The House of the Faun was the original site for one of the finest artworks to have come down to us from antiquity - the mosaic depicting the Battle of Issus, in which Alexander the Great conquered the Persian forces of Darius. Today you can gaze on the visage of Alexander from down the centuries in the Naples Archaeological Museum, where many of Pompeii’s most priceless treasures are currently displayed.

House of the Vetti 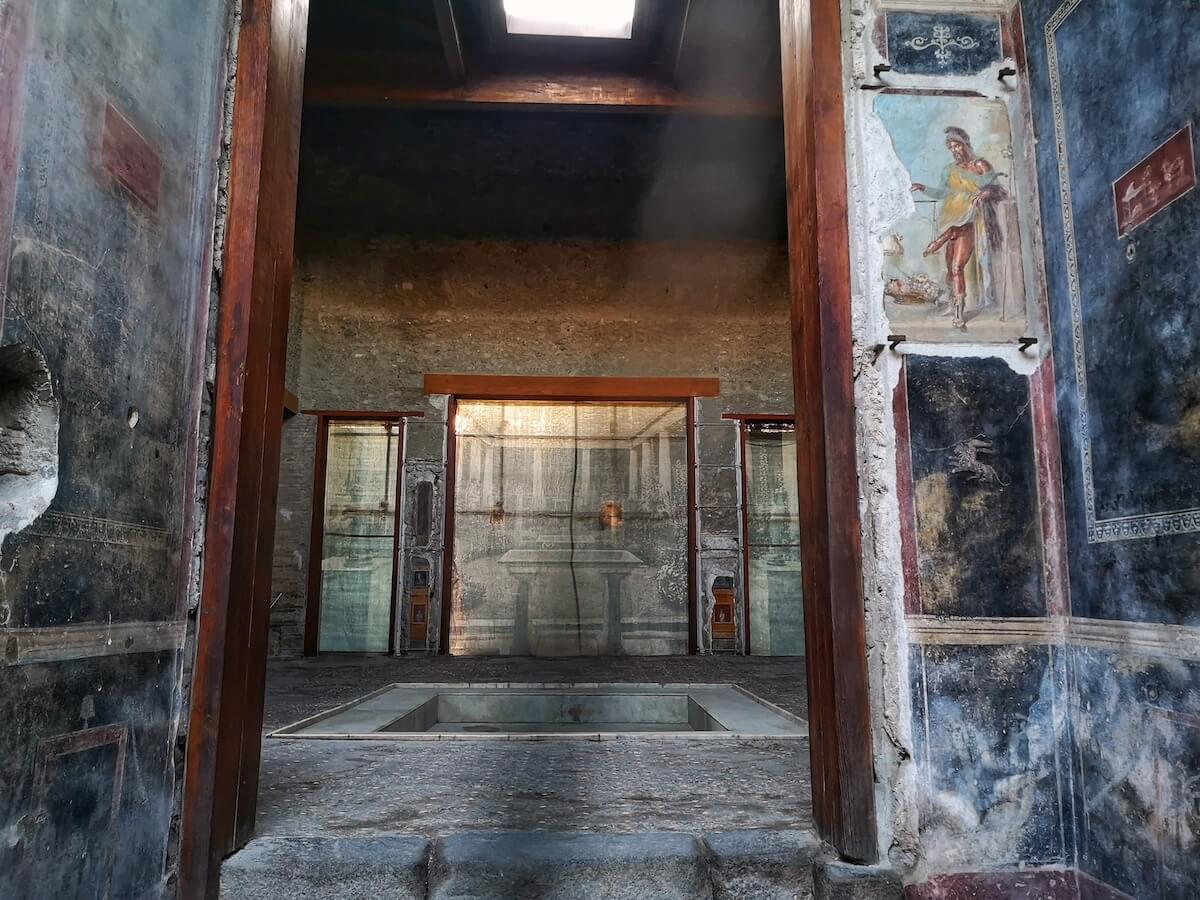 The House of the Vetti is one of the finest examples of Roman domestic architecture in Pompeii. Belonging to the brothers Aulus Vettius Conviva and Aulus Vettius Restitutus, former slaves who amassed fortunes on achieving their liberty, the house is protected by Priapus, ancient god of fertility and prosperity, who features in a fresco by the entrance weighing his outsized manly member in a scales. The interior rooms of the House of the Vetti are richly decorated with more vibrant artworks; wonderful frieze runs around what was once the dining room, featuring putti selling wine, harvesting crops and making jewellery. Other mythological scenes include the story of Leander as well as that of Ariadne and Theseus. Two strongboxes, known as arca, stand in the atrium, ostentatious signs of the Vetti’s vast wealth. 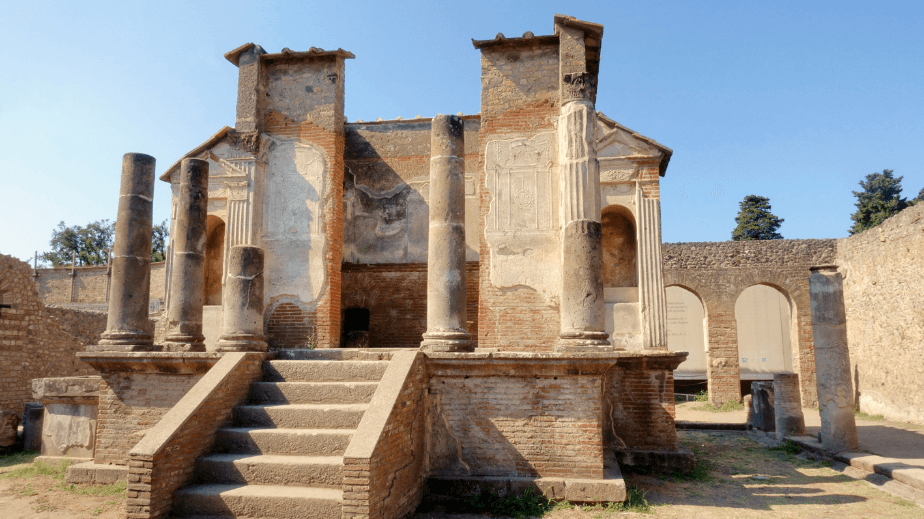 The cult of Egyptian gods were extremely popular in the Roman world, and a mania for all things Egyptian would reach fever pitch after the Nile-valley civilisation was assimilated into the Roman empire in the first century BC. The Temple of Isis is the most impressive testament to this history in Pompeii. After an earthquake toppled an earlier temple dedicated to the goddess, a new shrine was built in 62 AD. Standing on a raised base, a series of columns 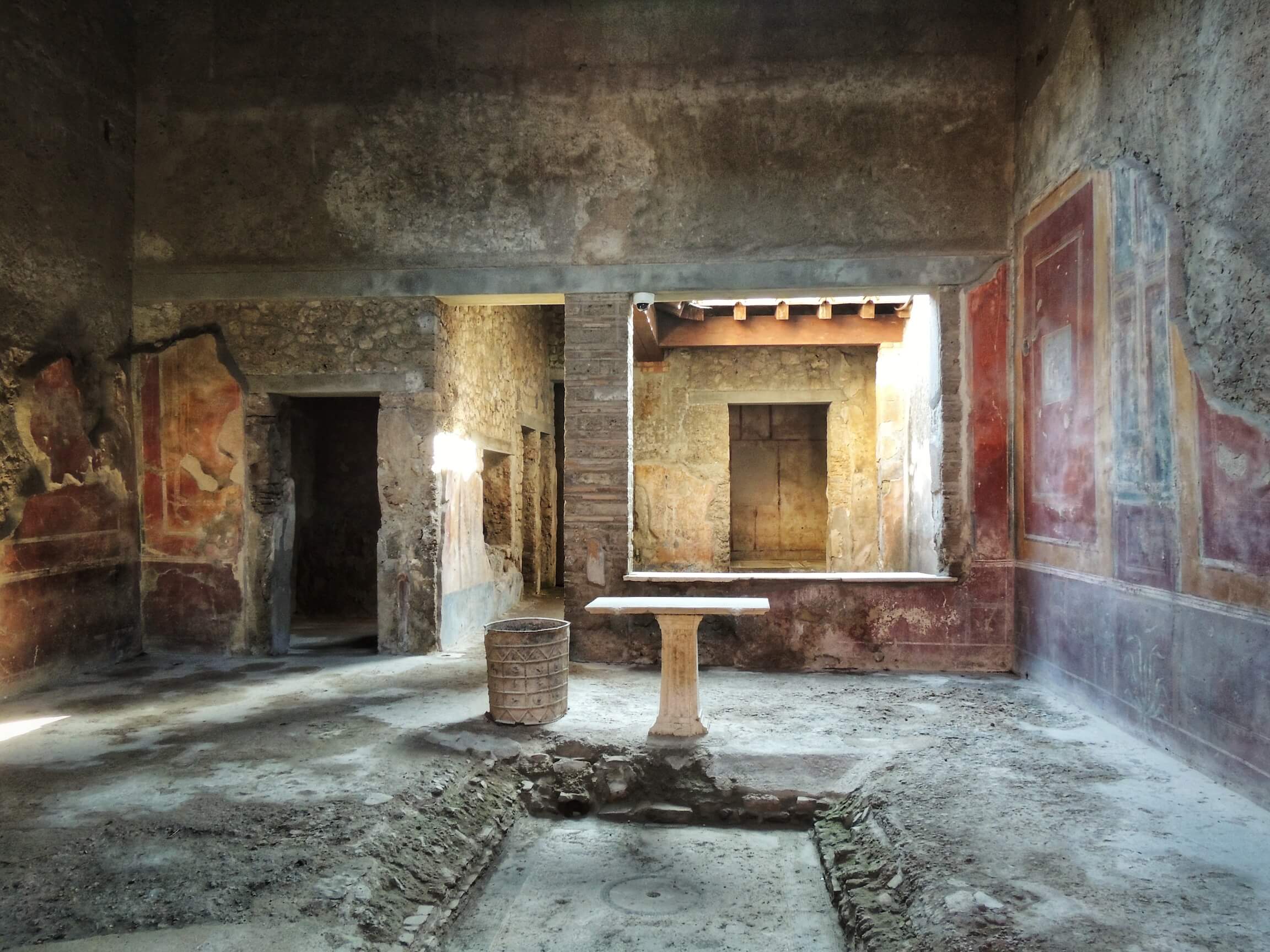 This beautifully appointed villa was certainly the home of a well-heeled aristocrat. The building owes its name to a mosaic that was found on the site depicting an actor preparing himself for a performance, and the House of the Tragic Poet is a treasure-trove of priceless artistic finds. Other highlights include a mosaic representing Ariadne and Theseus and the world-famous Cave Canem mosaic at the entrance: literally translated, the inscription bears a warning that is familiar from yards and gardens across the world even today: ‘beware of the dog’. The snarling black canine who warns us off trespassing above the text is certainly intimidating enough, straining at his chain with teeth bared. Enter if you dare!

The Temple of Apollo 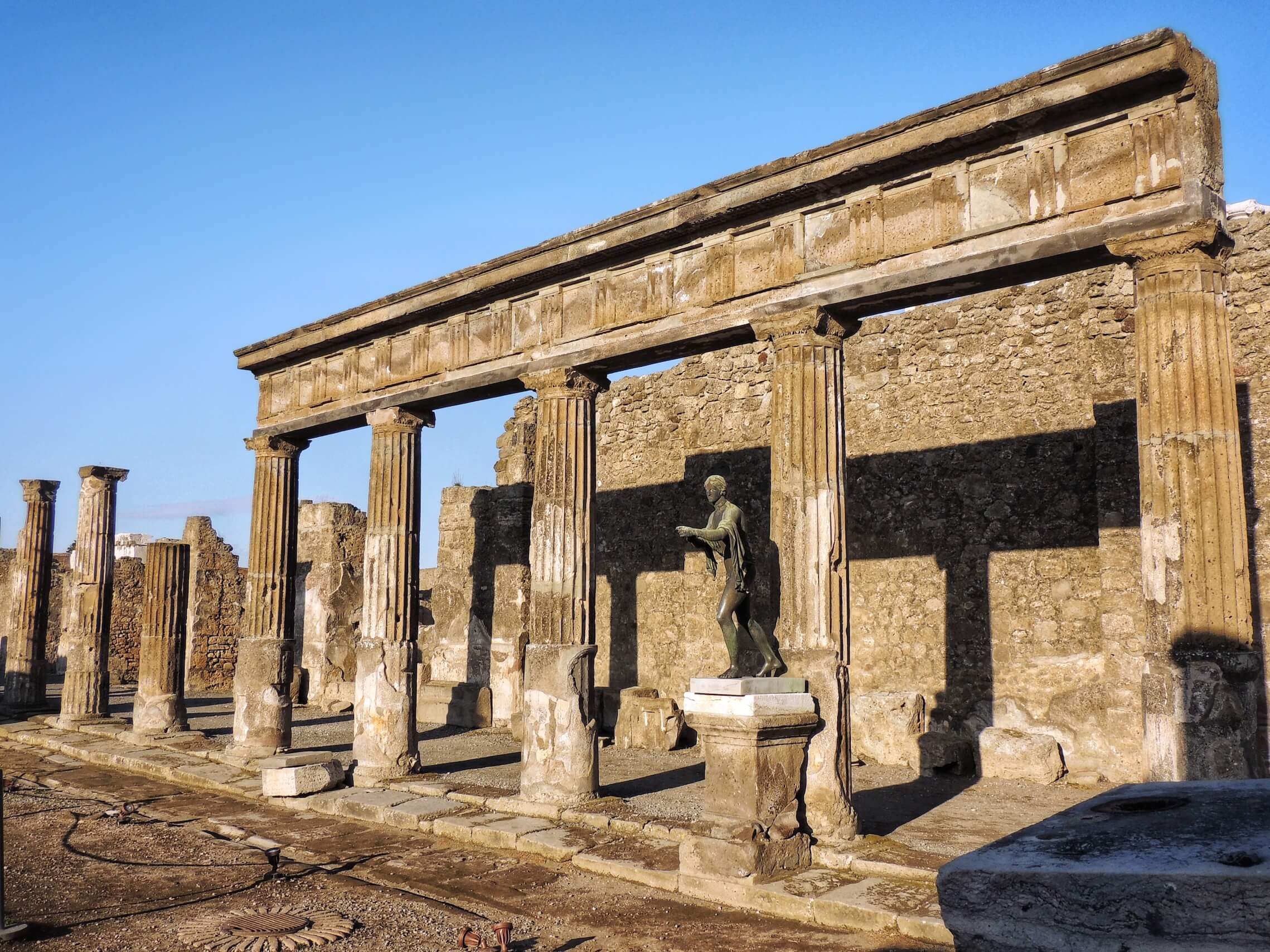 The imposing temple of Apollo enjoys a primo position off of Pompeii’s Forum, as befits the cult site of one of the Roman pantheon’s most important gods. No fewer than 48 Ionic columns ring the temple, which dates from the 2nd or 3rd century BC. At the centre of the structure is a high podium that would have carried the altar where sacrifices were performed in Apollo’s honour.

The House of Julia Felix 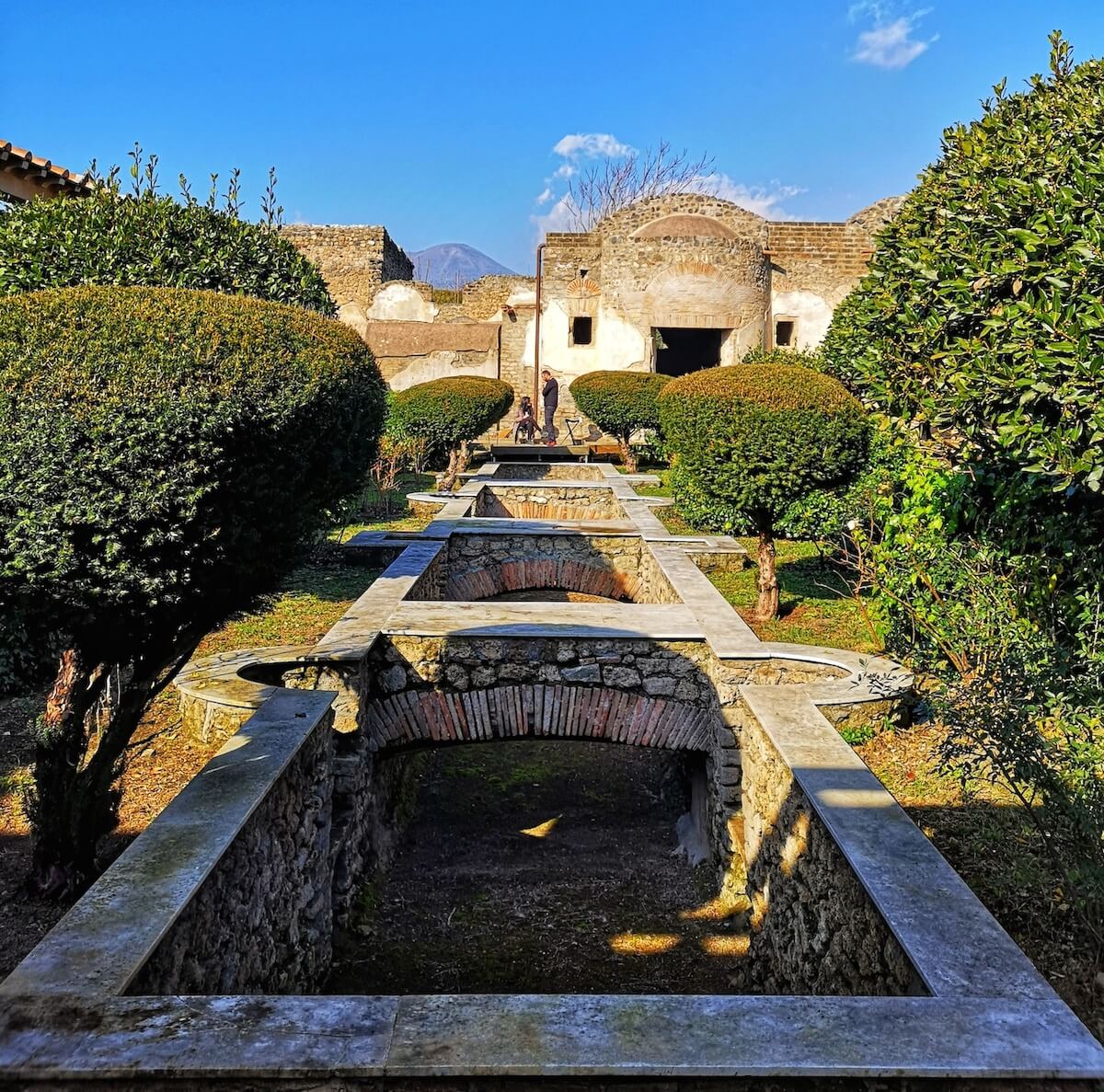 Amongst the well-heeled villas and residences and of ancient Pompeii's upper crust, elegant gardens are two a penny. But few are as evocative of antiquity's splendour as that belonging to the house of Julia Felix, a sweeping pile of prime real estate that included gardens, baths and shops surrounding her elegant Domus.

It has been theorised that Julia's gardens - complete with a series of small canals crossed by bridges surrounded by shaded shrubbery - recreated the Canopus canal in Egypt, recalling a similar recreation by the emperor Hadrian in his Tivoli villa. 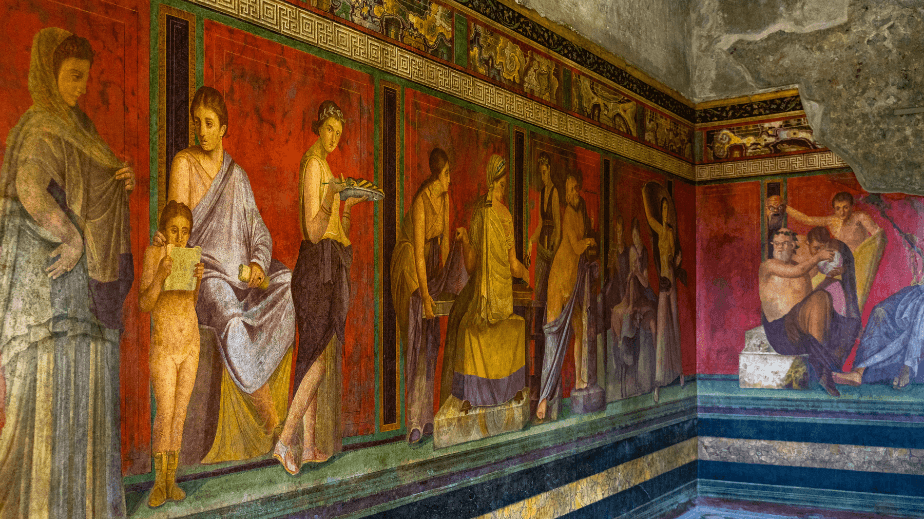 Located a short way from the remainder of the archaeological site, the Villa of Mysteries is, ahem, rather mysterious. This luxurious villa on the outskirts of town takes its name from the extraordinary, life-size frescoes that adorn its walls within, which portray the initiation of a girl into a mysterious pagan cult. These top-secret cults were closed to outsiders, their rites remaining a mystery to the uninitiated. It seems however that many of the mystery cults centred around devotions to Bacchus, the chaos-loving god of wine, and alcohol-induced frenzies were probably a key element of these cult practices. Although not within the site of Pompeii itself, it’s well worth making the effort to visit the Villa dei Misteri to admire some of the finest ancient wall paintings in existence, their colours shining with the same vibrancy as they did two millennia ago.

If you'd like to see the spectacular highlights of Pompeii in the company of an expert archaeologist, then check out Through Eternity's range of Pompeii tours here! 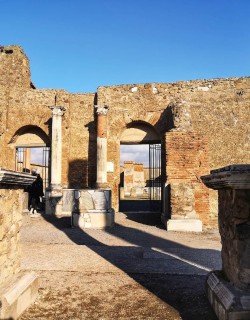 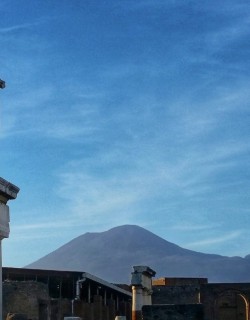