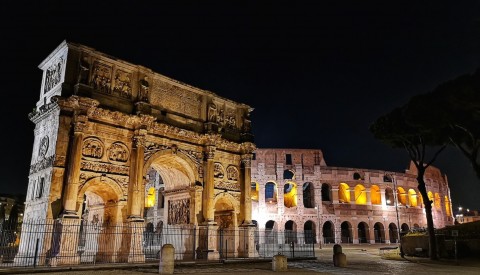 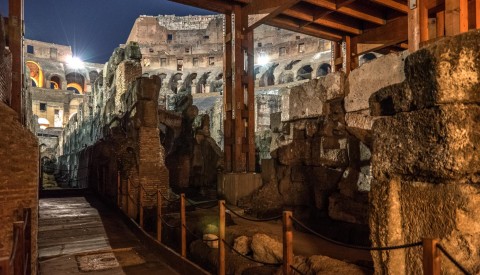 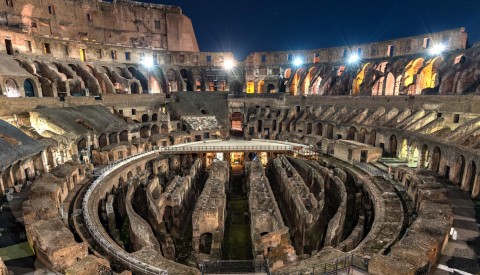 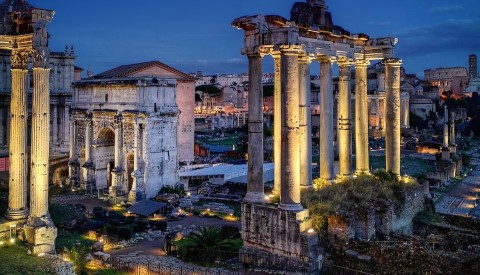 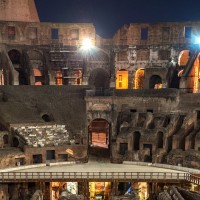 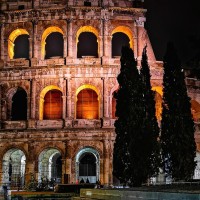 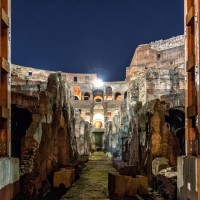 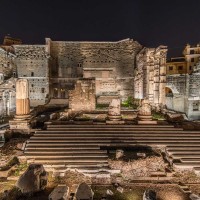 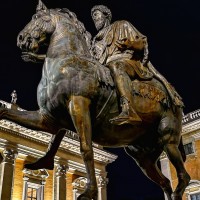 Join us for our special Colosseum Night Tour, the most romantic and dramatic way to experience the thrill of the iconic ancient amphitheatre. Exploring the incredible edifice bathed in moonlight after it has closed to the general public makes for a truly unforgettable experience. On this unique itinerary we’ll get to explore the darkly atmospheric tunnels of the Colosseum’s underground labyrinth, where terrified wild beasts and gladiators awaited their turn on the sands of the arena above. Follow in their blood-soaked footsteps and see what the gladiators saw, all in the company of an expert guide. Our Colosseum at night tour is an incredible after-hours introduction to the Eternal City, and the awe-inspiring sight of ancient Rome spectacularly illuminated in the darkness will stay with you forever – book your place today!

Tour the Colosseum at Night

There are many different ways to get the most out of your visit to the Colosseum. We offer different Colosseum tours which include a visit of Ancient Rome, because only by understanding the original backdrop of Roman society can you truly appreciate what the gladiator games were and make sense of their popularity. Amongst the various solutions we offer our Colosseum at Night Tour has an added value: you’ll have the unique opportunity to experience this imposing structure in the magical atmosphere of the Roman night - a totally different experience to seeing it during the daytime. During these exclusive evening openings, you will be amongst a small number of visitors able to witness the Colosseum at its most nostalgic, revealing the full sense of its past glory. The great artists of the Renaissance, such as Brunelleschi and Michelangelo, were fascinated by the cultural legacy of Imperial Rome – for them visiting the Colosseum was a sort of pilgrimage of classical art. Percy Shelley summed up his own visit to the Colosseum writing about its impressively huge walls topped by a forest of shrubs with wild olive and myrtle trees. It was moreover often at night that travellers would discover the Colosseum: it’s no coincidence that Henry James used a night-time Colosseum walk for an episode of his novella "Daisy Miller".

Our night tour of the Colosseum is a thrilling journey into the most fascinating arena of Imperial Rome. We’ll recount the life and stories that animated the largest metropolis of the ancient world, home to over one million inhabitants at the end of the first century A.D. Our guide will walk with you through the very crowd of Romans who made the gladiator fights so popular, recreating their lives in fascinating detail. You will learn about the incredible organisation that went into staging these highly orchestrated violent spectacles, framed by spectacular scenery and sophisticated machinery that totally captivated the Colosseum’s vast audiences.

Our Colosseum tour at night begins in the magnificent Piazza del Campidoglio, a wonderful square built by Michelangelo that stands out as a symbol of the elegance and beauty of the Renaissance. This square is an ideal point to begin your tour, brilliantly showcasing the nostalgic inspiration that the artists of the Renaissance drew from the rediscovered sights of antiquity and the journey the city has taken through the centuries – from oblivion to re-birth. This beautiful piazza is also home to the fascinating Capitoline museums, one of the world’s greatest collections of ancient art.

Our tour continues with a walk, or ‘passeggiata’ as the Italians say, down the Via dei Fori Imperiali. At night this is a truly wonderful experience - imagine that you’re in the midst of an outdoor museum, a fascinating time capsule bathed in moonlight beneath the stars. On one side are the majestic ruins of the Forum of Augustus and the striking concave architecture of Trajan's Market, dominated by the enormous columns of the Basilica Ulpia. On the other side of the Roman Forum we’ll walk up to the back of the Capitoline hill to see the stunning ruins of the Roman Forum from an elevated viewpoint - the Temple of Saturn, the Temple of the Vestal Virgins and other spectacular buildings all spreading out before us. Our guide will remain on hand throughout to help you understand the importance of these buildings in the context of Imperial Rome and the rituals that took place here as daily life unfolded all around them.

Visit the Colosseum beneath the stars

At the end of beautiful Via dei Fori Imperiali we’ll reach the iconic Colosseum. Our tour here begins on the first level, where you can take in the original structure of the building – built by the labor of hundreds of slaves who worked with travertine brought from quarries at nearby Tivoli. Enter the minds of the remarkable architects who gave birth to the project and somehow made the construction possible in just ten years. The Colosseum was the largest amphitheater of the Roman Empire, which at the time boasted more than 200 similar structures. The area where the Colosseum now stands was once the site of an artificial lake on the grounds Nero’s Golden House. The emperor Vespasian, a member of the Flavian dynasty, wanted to return the area to the Roman people; and so after Nero’s death the lake was filled in to make way for the amphitheater, with the giant statue of Nero in the guise of the sun god placed near the arena’s entrance. The statue stood at over 30m in height and it was its ‘colossal’ that gradually led to the amphitheater being known as the Colosseum. To learn more about the statue of Nero and his controversial life, we recommend our Domus Aurea Tour.

Discover the secrets of the ancient world's most iconic edifice

The ellipse of the Colosseum had eighty numbered arches along the perimeter to facilitate the flow of spectators and this number was printed on the free ticket that the Romans were given before the games. The various entrances led the Romans through separate paths at different levels of the structure, arranged according to their social status. Along the minor axis of the ellipse were the portals for the authorities; between the underground passages lay the so-called "passage of Commodus," where the Emperor reached the Imperial podium, located near the present cross. Along the major axis was the Triumphalis entrance, where the procession of gladiators entered the arena accompanied by musicians. The Porta Libitinensis instead was where the gladiators would exit the arena, dead or alive. A series of underground tunnels linked the Colosseum to the support buildings that made the games possible. One of the most important of these was the Ludus Magnus, the accommodation and training area of the gladiators which you will also have the opportunity to visit.

From the Porta Libitinensis you will access the arena itself, today a wooden platform covering the underlying underground structures of the Colosseum that was in the past covered with layers of sand. The arena was enormous, and was often transformed into recreations of distant lands and exotic locations for the purposes of the games – satisfying an insatiable public appetite for novelty. The gladiatorial games were a carefully staged form of propaganda, reaffirming the absolute power of the emperor and at the same time demonstrating his generosity towards the people and Rome itself.

Explore the underground tunnels of the Colosseum at night

The night descent to the Colosseum’s underground is evocative to say the least. The underground, known in Latin as the hypogeum, consisted of a sequence of high-tech tunnels that were remarkable for the era. We’ll learn about the series of coordinated pulleys and gears that served the lifts for the arena: through access hatches, caged animals were brought up and down like cargo in a modern elevator. Our guide will help you unravel the wealth of archaeological evidence relating to the apparatus used, as well as show you beautiful contemporary engravings and mosaics found inside the Colosseum. You’ll also see how gladiators and animals were placed side by side in special cages - just imagine how they would have stared into one another’s eyes for the last time before their fateful ascent into the arena above. You'll also see that the labyrinthine underground area below the arena of the Colosseum was almost totally dark, illuminated only by the light of hundreds of gloomy lanterns - many of which have been found during archaeological excavations.

Unravel the story of the Hypogeum with our expert guide

Down here our guide will also give you the facts behind one the most intractable mysteries that has puzzled enthusiasts and historians of the ancient world for centuries. Were naval battles really recreated in the Colosseum? And if so, how was it possible to remove the underlying structures of the arena in order to make room for the ships' hulls? Contemporary historians do describe how recreated naval battles were staged as forms of entertainment, but they don’t specify exactly where or when these spectacles occurred. We know that when the Colosseum was inaugurated in 80 A.D., it hosted 100 consecutive days of shows; we also know that during this time the Colosseum’s underground areas were still under construction. At this stage they were in fact probably just wooden structures, and certainly not the mighty travertine structures that were built in a subsequent stage of the works – it was probably during this “beta phase” that the Colosseum hosted some these dramatic sea battles.

Get the real story behind the gladiators

First and foremost, you will discover just how varied the gladiator contests were. The most important were so-called ‘Munera’, fights between pairs of gladiators, and ‘Venationes’ - animal hunts that took place mainly in the morning. The hunts were followed by bizarre and tragic re-enactments of Greek myths such as the story of Icarus, in which men who had been sentenced to death were brutally massacred. The afternoon shows were dedicated entirely to the Munera, eagerly anticipated by the public. These involved exotic animals that were captured and brought to Rome from the most remote provinces of the empire. These shows represented an open window into the heart of the empire and its wonders, despite being from such distant lands, and provided a place where narratives and legends were created. The animals selected were of course usually fierce and fatal - tigers, lions and leopards for example. But milder beasts like giraffes, camels and elephants also made appearances.

Aside from the animals, the famous gladiatorial figures themselves provided a very effective form of propaganda. Many of the men came from distant lands and from Italy's isolated hinterlands. They showed the public archaic forms of fighting with strange weapons and combat techniques that the Roman audience would never have seen before. These would have been very curious and even bizarre sights for the public, making them very popular. We know all this from the hundreds of images depicting the games that have survived in the form of mosaics, funerary inscriptions and engravings on objects such as helmets and lamps. The word "gladiator" incidentally comes from "gladius," which meant sword in Latin.

Please note that the availability of timed entrances to the Colosseum's underground area are extremely limited. As a result, the exact time at which we we will enter the underground varies on each date.

If you want to further explore the beauty of Rome, at sunset, please check out our Rome at Twilight tour!

At Piazza del Campidoglio. You will receive full details, including a map and photo on booking.

I tried calling, I tried emailing and I tried messaging you to get a response because we had to cancel. Nothing!!! Not happy!

I tried calling, I tried emailing and I tried messaging you to get a response because we had to cancel. Nothing!!! Not happy!