A Virtual Guide to the Palazzo Barberini: 7 Artworks You Need to See 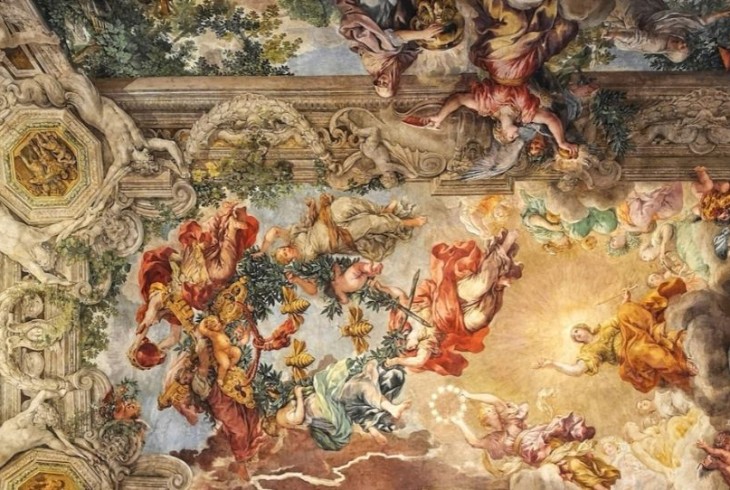 Amongst Rome’s glittering pantheon of Baroque palaces, Palazzo Barberini might just be the most spectacular. Built by the powerful Barberini clan when the family reached the height of their fame in the early 17th century, the massive and imposing palace was to set the standard for luxurious domestic architecture in Rome for centuries to come.

When Maffeo Barberini was elected Pope as Urban VIII in 1623, the man who would become the 17th century’s most powerful patron of art hired renowned architect Carlo Maderno to design a sprawling dwelling fit for his family’s newly exalted status. The elegant final design owes much to Baroque masters Gianlorenzo Bernini and Francesco Borromini too, who took over the works after Maderno’s death. What they came up with was one of the most impressive monuments to Rome’s golden Baroque age.

These days the opulent halls of the Palazzo play host to the exceptional collection of Italy’s Galleria Nazionale d'Arte Antica, one of city’s most important art galleries. Read on for our virtual guide to the masterpieces of the collection you need to see! 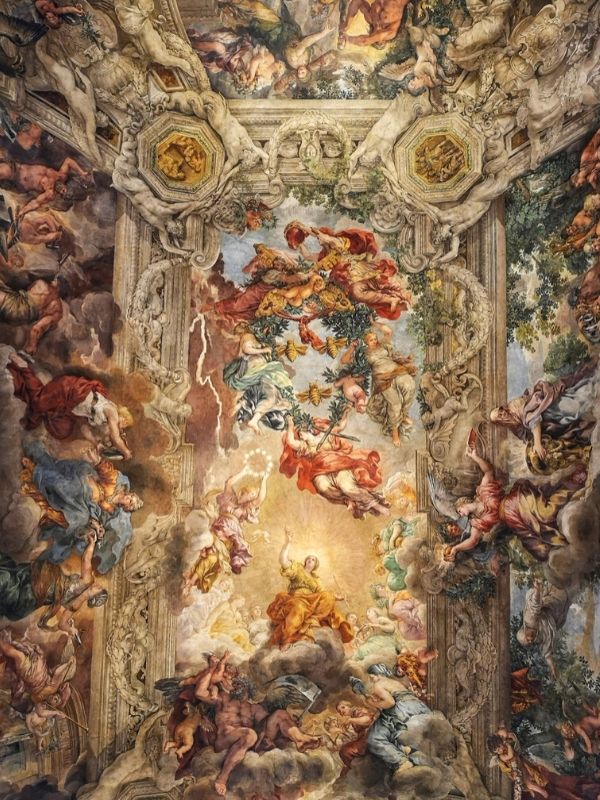 The show-stopping highlight of the Barberini collection is one painting that has been here since the beginning. As Palazzo Barberini was reaching its completion in 1632, Urban VIII called on Tuscan artist Pietro da Cortona to immortalise the fame of the commissioning family in the palace’s yawning great hall. The awe-inspiring composition is one of the absolute masterpieces of Baroque painting, dematerialising the Salon’s ceiling in a logic-defying act of illusionism.

In place of the ceiling, the viewer sees only open sky extending to the heavens, where the Barberini’s emblematic bees are being proffered the celestial crown of immortality. This type of complex illusionism was a favourite trick of Baroque artists, and da Cortona’s Barberini ceiling is amongst the most jaw-dropping examples of the technique, known as quadratura. Dozens of figures cavort across the massive space, and the personification of Divine Providence watches over the events with an approving eye, making clear that the exalted status of the Barberini on earth as in heaven was no mere chance. The family were chosen for greatness by God himself. 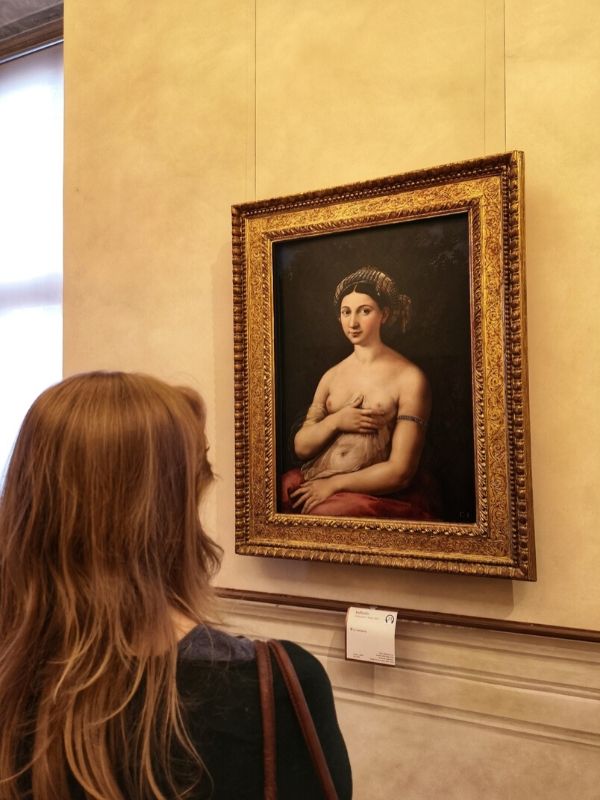 Here’s to the baker’s daughter. Graced with bags of charm and an easy manner, Raphael might just be the quintessential Renaissance artist – his elegant style was so appreciated by his contemporaries that he was thought to have been touched by the divine himself. Perfectly at home in the refined environments of the 16th-century Italian court culture, you might associate Raphael most closely with the epic frescoes of the Vatican palaces or a laundry list of impossibly beautiful Madonnas. But the startlingly intimate Palazzo Barberini portrait known as La Fornarina shows a dramatically different side of the painter.

A young woman wearing an exotic headdress stares frankly out at us as she ineffectually covers her bare breasts with a transparent veil, whilst a bracelet on her left arm bears Raphael’s signature.  The intimacy of the portrait is unlike anything else in Raphael’s oeuvre, and for good reason – the sitter is widely thought to be Margherita Luti, the daughter of a local baker and Raphael’s lover at the time of his death in 1520. It has even been suggested that the two had been secretly married on the basis of the ring the sitter wears on her finger. Whatever the truth, La Fornarina offers a fascinating insight into the personal world of one of the finest artists ever to pick up a brush. 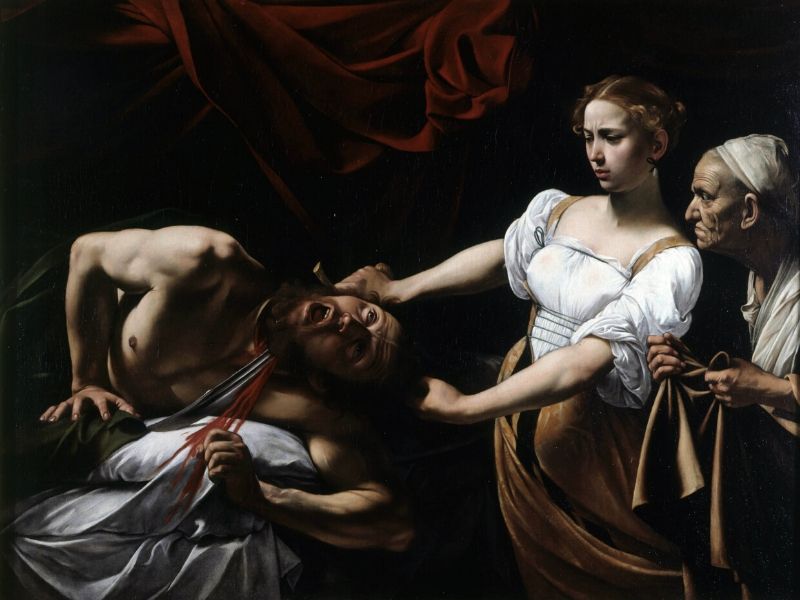 This is one femme fatale you don’t want to mess with. The subject matter is one of the Bible’s juiciest tales: Judith, a beautiful young Israeli widow, seduces the brutal Assyrian general Holofernes who is intent on razing Judith’s city of Bethulia to the ground. The lustful thug fatally drops his guard because of his desire for Judith, who wastes no time in getting him drunk before decapitating him with the aid of her faithful maidservant. Popular with artists for its innately dramatic potential, the tale proved the perfect subject matter for Michelangelo Merisi da Caravaggio, the greatest interpreter of violence and human conflict of his generation.

Caravaggio’s painting is an audacious combination of the ancient and the modern: sexy Judith seems more 16th-century prostitute than religious paragon, and her wrinkled companion is more procuress than maid. Sex and violence mingle in a potent cocktail which unsurprisingly divided Caravaggio's contemporaries, with traditionalists finding his painting’s conflation of sacred past and seedy present an indecorous and unforgivable provocation. Caravaggio was courting controversy, but the cocksure Lombard cared little for the opinions of his peers, safe in the conviction that he had found a winning formula - the often brutal world of the Bible had found its most uncompromising and original interpreter. 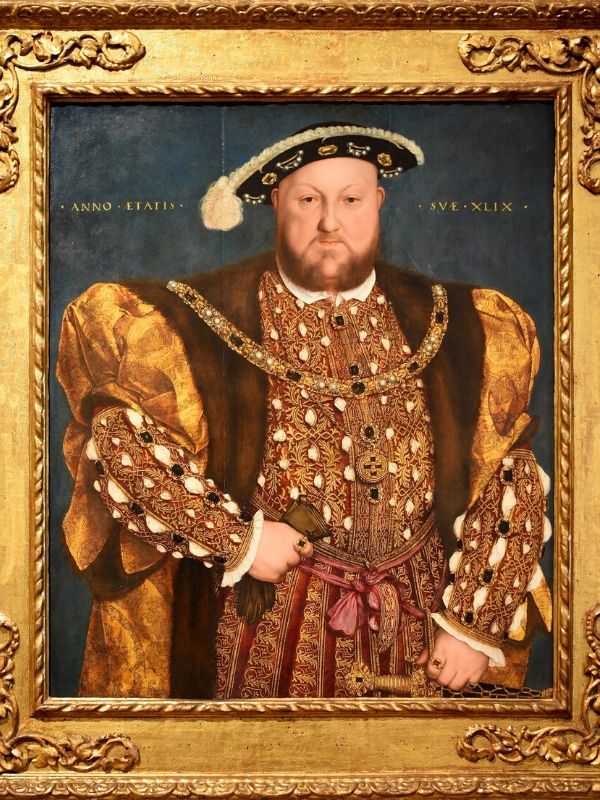 It might surprise you that the most iconic depiction of England’s most notorious monarch isn’t to be found in the halls of Buckingham Palace or London’s National Gallery, but instead in the gilded surrounds of Palazzo Barberini. The German artist Hans Holbein the Younger was appointed painter to Henry VIII’s Tudor court in 1536, and wasted little time coming up with a portrait of the ruler for the privy chamber in the Palace of Whitehall. The famous work was destroyed in a fire in 1698, but survives in this stunning later version.

Heavy of jowl and severe in expression, Holbein’s Henry projects the kind of no-nonsense authority you’d expect from a man who defied the Pope and had little compunction in dispatching enemies (and wives) to their maker. The portrait was painted when the sovereign was 49 years old to mark the occasion of his marriage to Anne of Cleves, Henry’s fourth wife (of six). Anne didn’t last much longer than her predecessors, and the marriage was annulled a mere six months later – although thankfully she escaped with her head.

Robed in the luxurious finery appropriate to Henry’s station, Holbein’s magnificent portrayal perfectly demonstrates the autocratic power and grandeur that came as part and parcel of any Renaissance king, and offers a vivid window into the world of the 16th century Reformation court. 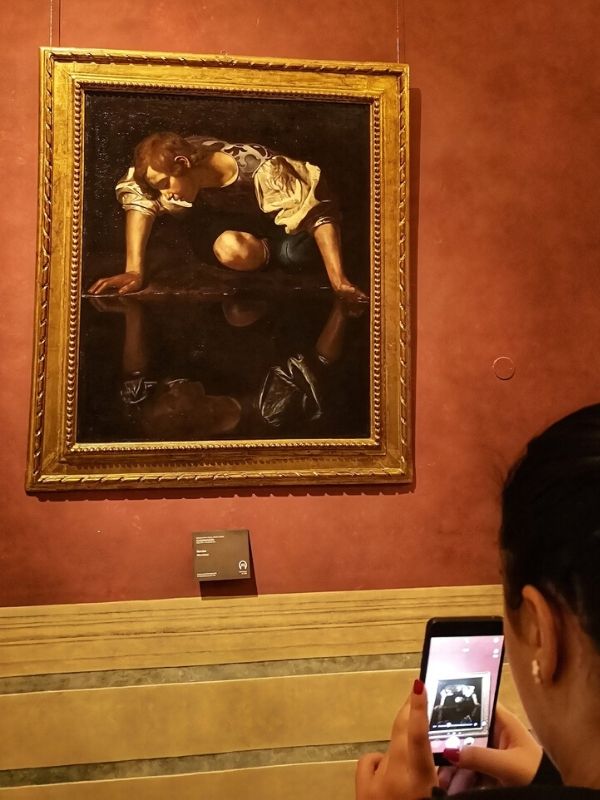 Beware the man in the mirror...The classical myth of the unfortunate Narcissus is one of literature’s great cautionary tales. As the beautiful young Narcissus is hunting in the woods, he catches a glimpse of his own reflection in a pool of water. Immediately overcome by the startling beauty of the watery figure before him, Narcissus falls head over heels in love with the ephemeral reflection.

Vainly awaiting for his love to be reciprocated, Narcissus descends into a fatal stupor of self-absorption, and is destined never to leave the poolside again – he ends his days transformed into a flower by the water’s edge.

Caravaggio’s virtuoso interpretation of the myth takes the form of a perfect mirror image, and captures Narcissus peering desperately into the inky waters of the pool, his lips parted in a sigh of unrequited love. The composition turns on the naked knee of the handsome young hunter, one of the most beautiful figures in Caravaggio’s entire oeuvre. 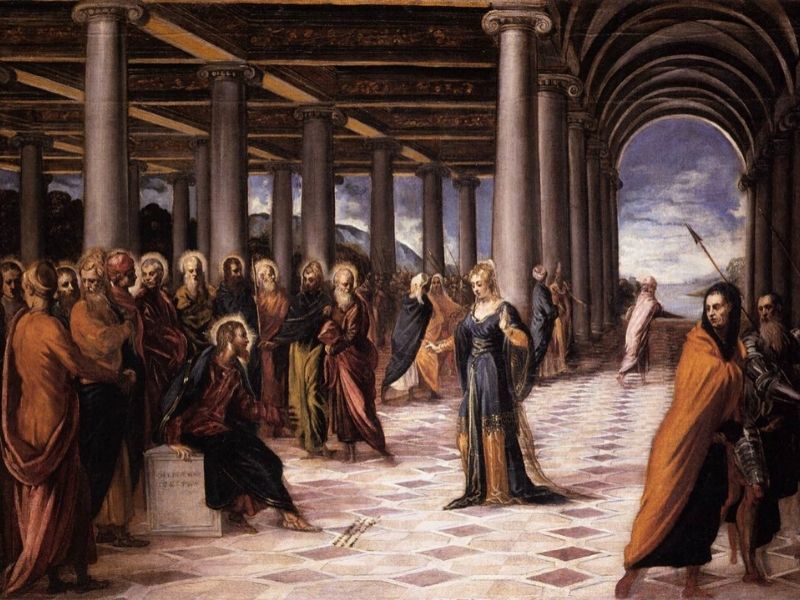 6. Tintoretto: Christ and the Woman Taken in Adultery

“Let him who is without sin cast the first stone.” It’s one of the Bible’s catchiest proverbs, and owes its genesis to the moment when Christ silences the Pharisees clamouring for the condemnation of an adulteress to death by pointing out their own inherent hypocrisy in casting judgement on matters of sin and punishment.

In Tintoretto’s dramatic imagining of the subject from c1550, the Venetian painter has Christ and the adulterer take central stage, wreathed in glittering golden light as the apostles form a protective ring around their Messiah. The visibly deflated Pharisees are exiting stage right, defeated by Jesus’ unanswerable rebuke.

Tintoretto was renowned for his virtuoso use of light and vertiginous spatial logic, and the Barberini canvas is no exception. The dramatically receding architecture of the densely columned portico where the action takes place is striking testament to the artist’s mastery of perspective, and the distinctively 16th century setting updates the tale for a contemporary viewing audience. 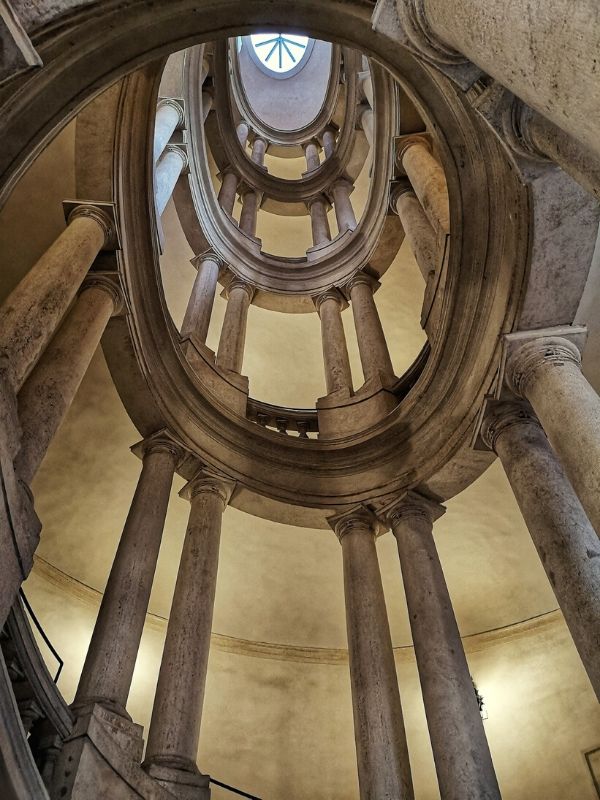 Given the Palazzo Barberini’s spectacular architecture, it would be remiss of us to limit our highlights list to the art of the painter’s brush. One of the most striking architectural features of the palace is the beautiful spiral staircase that serves the building’s southern wing, linking to Cardinal Francesco Barberini’s private suite of rooms.

The oval shaped staircase spirals upwards in sinuous curves of Doric columns decorated with the family’s bees, the whole ensemble flooded by light entering through the oculus at the top. As the most ambitious and inventive architect of the Baroque era, Borromini left his mark on every corner of the Eternal City, and the spiral staircase of the Palazzo Barberini is one of his finest creations.