How Deep is your Love? The Painful Ecstasy of Bernini’s Saint Teresa in Rome 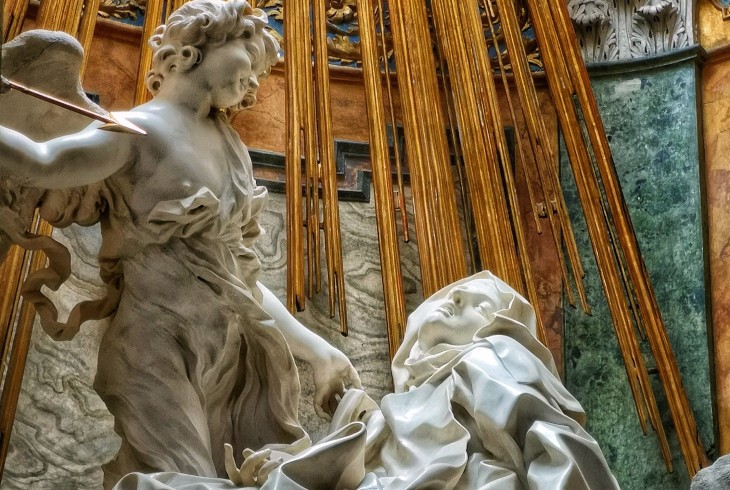 Divine love has never looked so good. Swooning high on a cloud of gravity-defying marble, the 16th-century saint Teresa of Avila throws her head back in a silent cry of ecstasy. A mischievous angel rises above her and giggles as he pulls back a gold-tipped arrow, ready to plunge it deep into the limp body of this young saint. The nun’s bare foot dangles precariously over the cloud’s edge, a naked limb that scandalised conservative viewers when the sculpture was unveiled in 1652. But our eyes seem magnetically drawn back to that dramatically foreshortened face, those delicately parted lips and those eyes rolling helplessly backwards in their sockets. Is this an expression of purest piety or thinly-veiled 17th-century erotica? You decide.

We’re in the Cornaro Chapel in the Roman church of Santa Maria della Vittoria. Suspended high in the air above the chapel’s floor, Gianlorenzo Bernini’s sculptural masterpiece the Ecstasy of Saint Teresa levitates as if by magic. Bernini, the pied-piper of the Roman Baroque and history’s greatest maximalist long before it became 2018’s trending interior design craze, set to work on this sculpture when he was at the very height of his powers in the 1640s, commissioned by the churchman Federico Cornaro to provide a fitting monument to the mystically inclined Spanish nun who had just been elevated to the ranks of sainthood.

Teresa’s route to the spiritual top wasn’t an easy one. In an age rife with suspicions of heresy and the terrors of the Inquisition, charismatic women were viewed with profound misgivings by religious hierarchies. Teresa’s propensity to experience vivid full-body visions and shuddering raptures made her an object of suspicion for theologians fearful of unorthodox expressions of religious sentiment. The saint-to-be was even interrogated by the Spanish Inquisition, who confiscated and censured her steamy writings about divine love. Thankfully things went well for her in the end: the church ultimately ruled that Teresa’s mystic experiences were genuine encounters with God rather than Satan’s temptations, and her path to sainthood was ensured.

Teresa was no run-of-the-mill saint, and Bernini pulled out all the stops to do justice to the blazing emotional intensity that was her hallmark. The sculptor chose to picture her experiencing her most famous all-body vision, following to the letter the breathless autobiographical account written by the saint. Teresa describes how a beautiful angel plunged ‘a great golden spear’ with a fiery tip deep into her heart several times. When he pulled it out it, Teresa was left ‘utterly consumed by the great love of God.’ For the uninitiated, Teresa’s masochistic account seems like it’s sacreligiously straight from the 50 Shades playbook: ‘the pain was so severe that it made me utter several moans. The sweetness caused by this intense pain is so extreme that one cannot possibly wish it to cease, nor is one's soul content with anything but God.’

The angel’s gleeful penetration of the inert young woman has unavoidably led to centuries of accusations that Bernini got a bit hot and bothered on the job and left piety at the door. But though the statue throbs with an erotic charge that’s hard to ignore, such brilliant emotionalism had its role to play in inspiring pious devotion. This is how much you need to love God, it seems to say; this is how much you need to feel the force of the Divine with all your body and soul. With the unique touch of a genius, Bernini has breathed so much life into his marble protagonists that you almost want to reach out and take their pulses – feel the warm blood coursing through the sprightly angel’s veins, search for the spark of life in the limp and heavy limbs of the out-for-the-count saint. 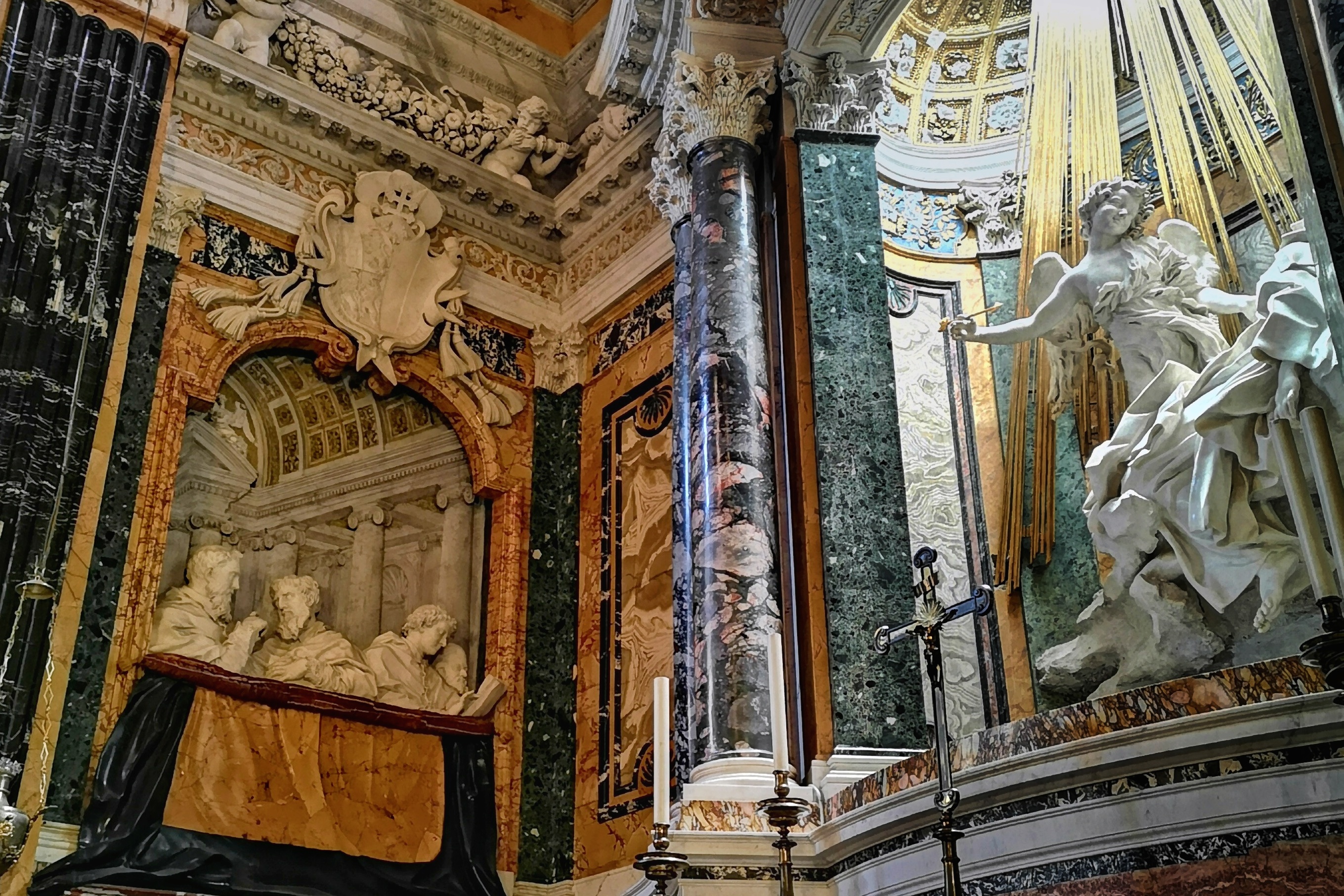 Cast your eyes to either side of Teresa and the angel, and you realise that we’re not the only ones given privileged ringside seats at this theatre of mystic revelation. On the chapel’s side walls, eight venerable bearded men take their seats on balconies overlooking the action, leaning out of the boxes as they turn to one another in animated discussion. These are members of the Cornaro family, whose act of patronage ensured that they got to eternally partake in the miracle. Their act of witness is the much needed proof that Teresa’s vision was real, sent by God and not the devil, and the guarantee of her elevation to sainthood.

The Cornaro crew’s sober appraisal and rational beard-stroking bearings indicate that they take the scene for what it’s meant to be, a pure and holy vision that brought Teresa closer to God. But what about those of us who see something more in the chemistry between Teresa and that angel who looks for all the world like a pagan Cupid, locked in a dangerous game of earthly pain and spiritual pleasure? The Cornaros would no doubt tell us to get our minds out of the gutter, but I’m not so sure we’ve got it wrong. I think Bernini knew exactly what he doing, and brought together piety and eroticism in a potent cocktail that he was sure would set tongues wagging for centuries to come. What do you think?

When in Rome don’t miss the city’s most spectacular piece of Baroque stagecraft: go see Bernini’s masterpiece for yourself in the church of Santa Maria della Vittoria at 17 Via XX Settembre every day between 08.30 and 12.00 and again after lunch between 15.30 and 18.00. Watch out for Sunday masses! Entrance is free. If you’d like to avail of a custom tour that takes you inside all the highlights of Baroque Rome, get in touch with Through Eternity today.