Cardinal and Connoisseur: Five Highlights of the Borghese Gallery in Rome

Cardinal and Connoisseur: Five Highlights of the Borghese Gallery

Nestled in the heart of Rome’s most beloved public park, the Borghese Gallery is one of the world’s greatest collections of painting and sculpture. Cardinal Scipione Borghese was an avid (and ruthless) art collector, a man who stopped at nothing to get his hands on a masterpiece. Indeed, one night in 1608, hired thieves slipped into a convent under cover of darkness and stole its altarpiece, a Deposition by Raphael. It now hangs in the Galleria Borghese among hundreds of other treasures.

You might question his methods, but never question his taste: the collection is a greatest hits of Italian art, all housed in a luxurious palace befitting the pope’s nephew. The cardinal also had an eye for rising talent, and some of the main attractions of the Borghese Gallery are early virtuosic works by Caravaggio and Bernini. The following are just five of the most important highlights of the Borghese Gallery:

Viewed from the rear, this ancient marble statue appears to represent a nude woman in the depths of sleep; walk around the front, however, and you’ll find a little… surprise. With both male and female features, it may seem a peculiar subject for a Greco-Roman statue, but this figure actually comes straight from classical mythology.

Hermaphroditus, as his name suggests, was the son of Hermes and Aphrodite. A handsome youth, he attracted the attention of a water nymph, who fell so deeply in love that she prayed to the gods that the two would never be separated. Her wish was granted, and the gods combined their bodies into one androgynous form.

The Sleeping Hermaphrodite has long fascinated viewers, out of both love for its beauty and curiosity regarding its unusual form. The ancient Romans were big fans; in fact the statue in the Borghese Gallery is a Roman-era copy of a lost Greek original (probably in bronze). There are over a dozen of these Roman copies––in the Uffizi, the Hermitage and even the Vatican––which attest to the sensuous allure of the original statue. 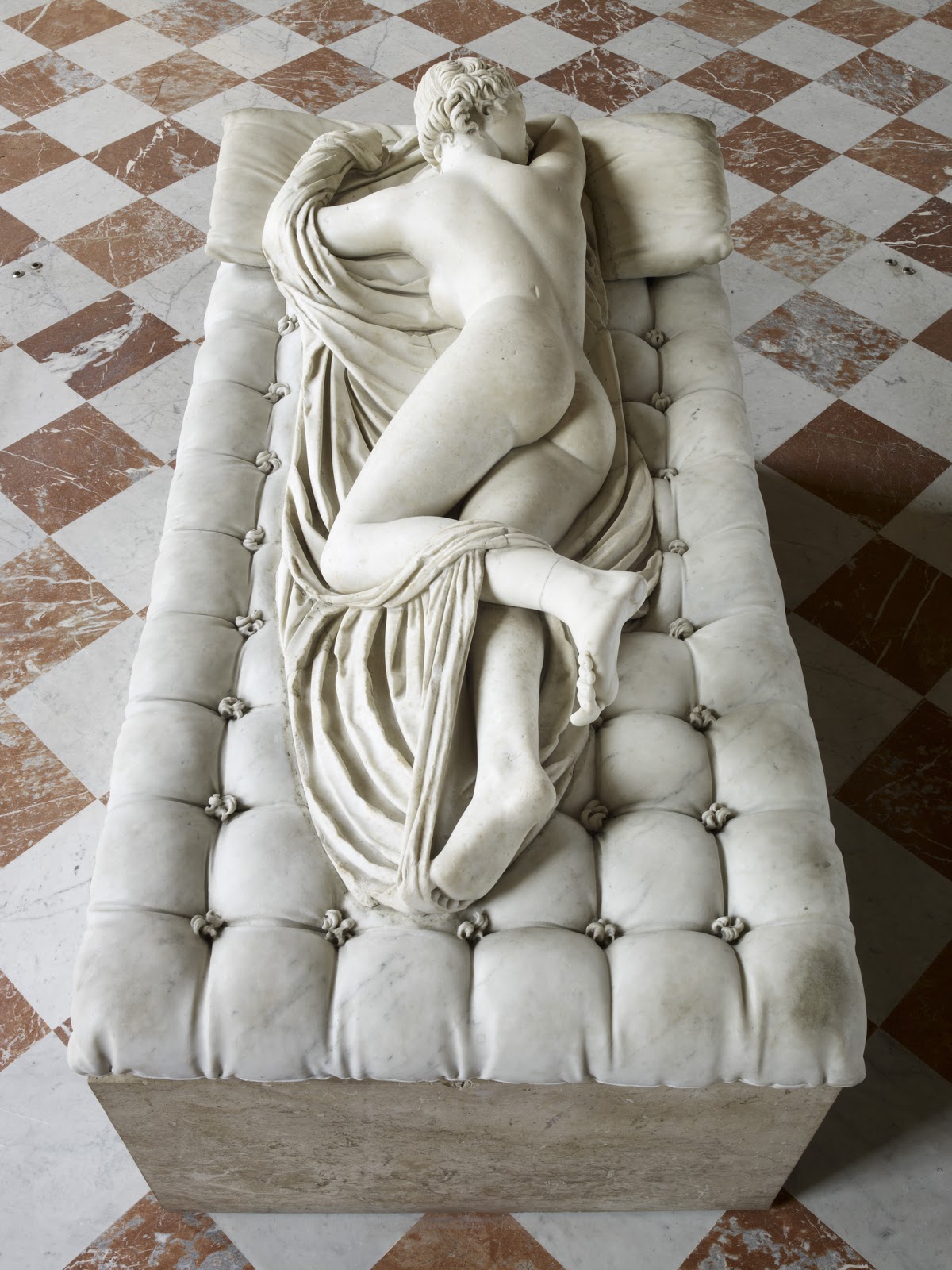 2. Young Woman with a Unicorn by Raphael

This striking image of a young beauty, certainly one of Raphael’s finest portraits, is also one of his most enigmatic paintings. Scholars continue to debate the identity of the blonde maiden: could she be the bride of Agnolo Doni, the wealthy Florentine who also commissioned Michelangelo’s Holy Family? Or perhaps it depicts the infamous Lucrezia Borgia, Renaissance femme fatale and illegitimate daughter of Pope Alexander VI? Others have suggested Giulia Farnese, the alleged mistress of the same pontiff.

The key seems to be the adorable mini-unicorn the subject holds in her lap; it was a symbol of purity, appropriate for a young noblewoman. Yet this too holds a secret: X-ray examinations have revealed that the unicorn was a later addition, painted over Raphael’s original choice: a dog. The reason for altering the painting might yet reveal the identity of the sitter; perhaps a dog, symbol of loyalty, was thought tasteless after her betrothal went sour.

While Raphael’s subject remains a mystery, his inspiration is clear; this portrait was painted only a few years and possibly just a few months after Leonardo da Vinci’s famous Mona Lisa. Although Raphael’s canvas is much brighter, he borrows its pose and format from Leonardo’s work. It’s a testament to the respect of an emerging genius for an old master, and evidence of the fertile creativity and exchange of ideas that characterized the Italian Renaissance. 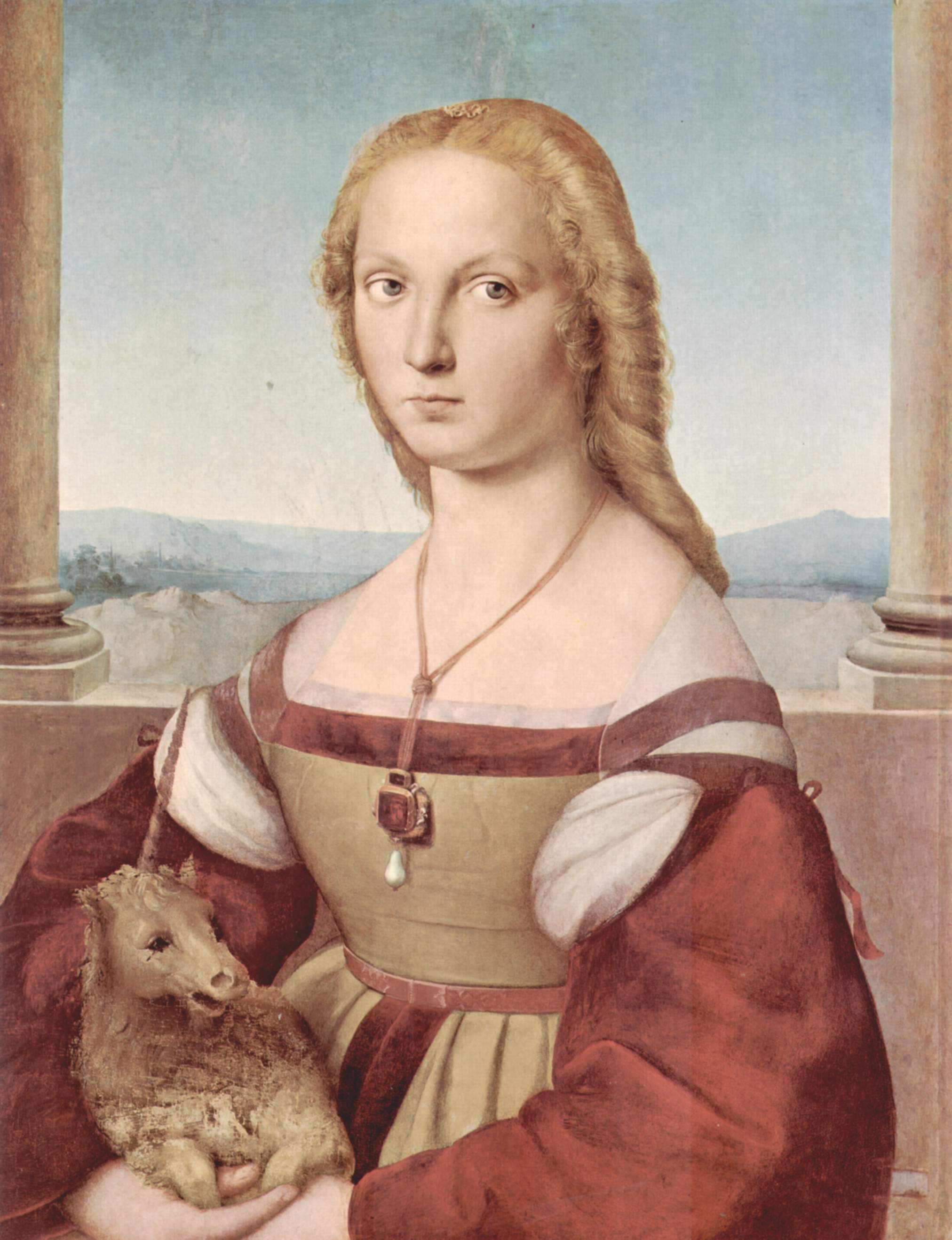 In Ovid’s Metamorphoses, Apollo, god of archery, makes fun of Cupid’s tiny bow, but the god of love gets the last laugh. He shoots Apollo with an arrow, making him fall in love with a wood nymph named Daphne, while at the same time making sure she will never love him back. Driven mad by desire, Apollo chases Daphne through the forest and nearly catches her, but at the last moment she escapes by transforming into a tree.

It’s this very moment of metamorphosis that Bernini chose to capture in his breathtaking marble statue, without question the Borghese Gallery’s greatest sculpture. His creation closely follows the text of Ovid’s poem: her hair grows into leaves, her arms into branches; her foot, just now so swift, sticks to the ground with heavy roots. All of these details appear, none more miraculous than the foliage sprouting from her fingers, the delicate carving of which is almost as unbelievable as the ancient myth.

The young Bernini––he was only 23 when he started this statue––instilled his work with a sense of motion and vitality that was to characterize both his own work and the Baroque period in general. Indeed, he was even able to transform the static medium of statuary into a kind of moving picture: from behind (Apollo’s view) you just see a woman, but as you circle around her, the bark grows up and up until finally you can see almost nothing but a tree.

Also in the Borghese Gallery are three other statues by Bernini, including the Rape of Proserpina and his David. Most of the artist’s other works are on public display in churches, including his numerous embellishments to St. Peter’s Basilica. 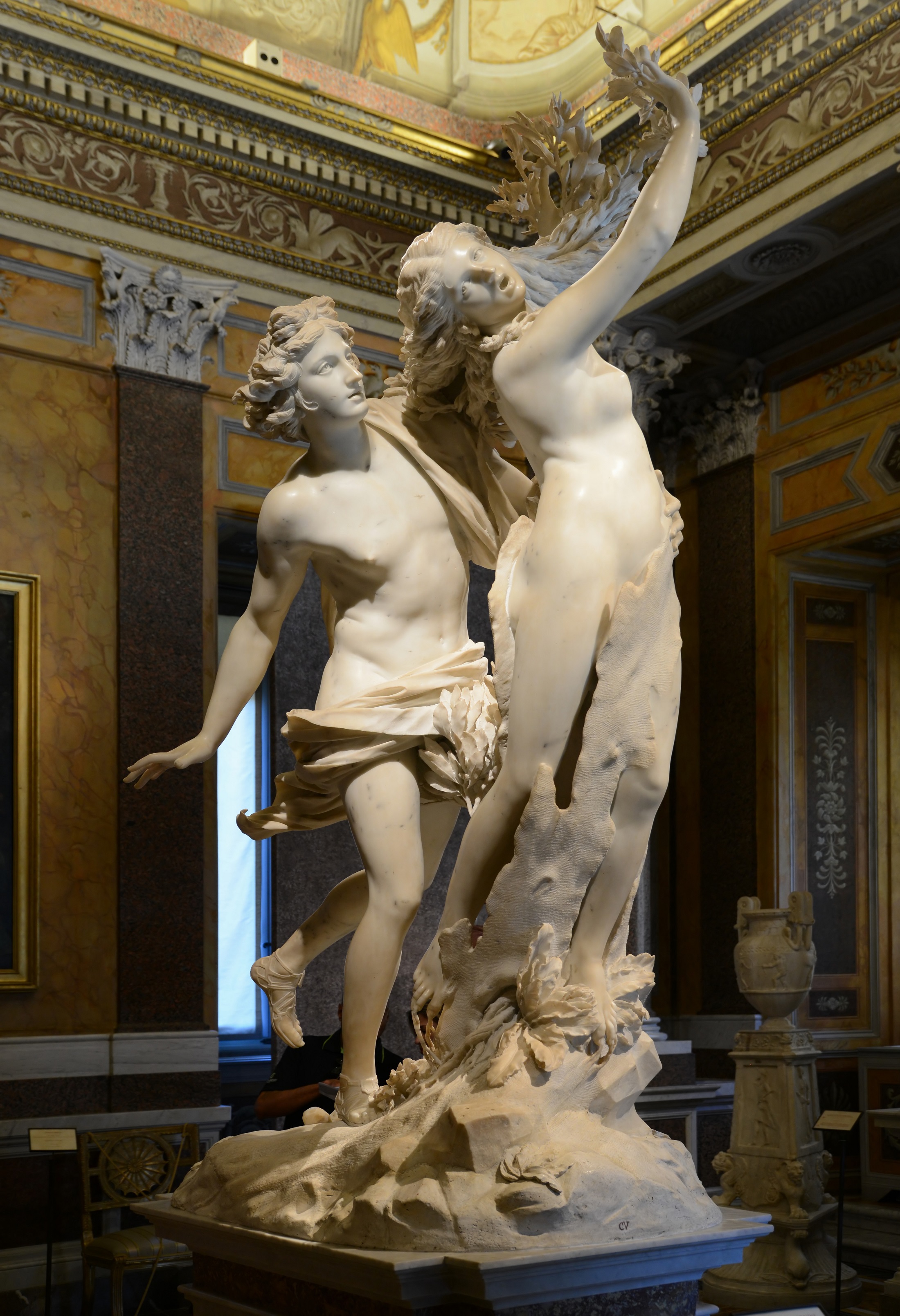 4. David with the Head of Goliath by Caravaggio

The Borghese Gallery has more paintings by Caravaggio than any other museum in the world, thanks in no small part to the connoisseurship and guile of Cardinal Scipione. These span the entire career of this great Baroque artist, including early canvases as well as one of his final and most personal works, David with the Head of Goliath.

The painting has many of the trademarks of the artist’s mature style: intensely dark background, bold contrast between light and shadow, and a violent Biblical theme. Unlike Michelangelo’s famous statue, Caravaggio depicts the aftermath rather than the prelude of combat. David holds up the severed head of Goliath, almost inviting the viewer to inspect the gory trophy; the hero is not triumphant but pensive, even seeming to feel a little pity for his victim.

This appeal for pity almost certainly had a personal significance; Caravaggio painted the head of the giant Goliath with a portrait of his own face. Although the dating of the canvas is debated, it is possible that Caravaggio painted it while in exile from Rome after being charged with murder. The painting, then, might have been an attempt to sway his powerful patron, Cardinal Borghese, to intercede on his behalf. 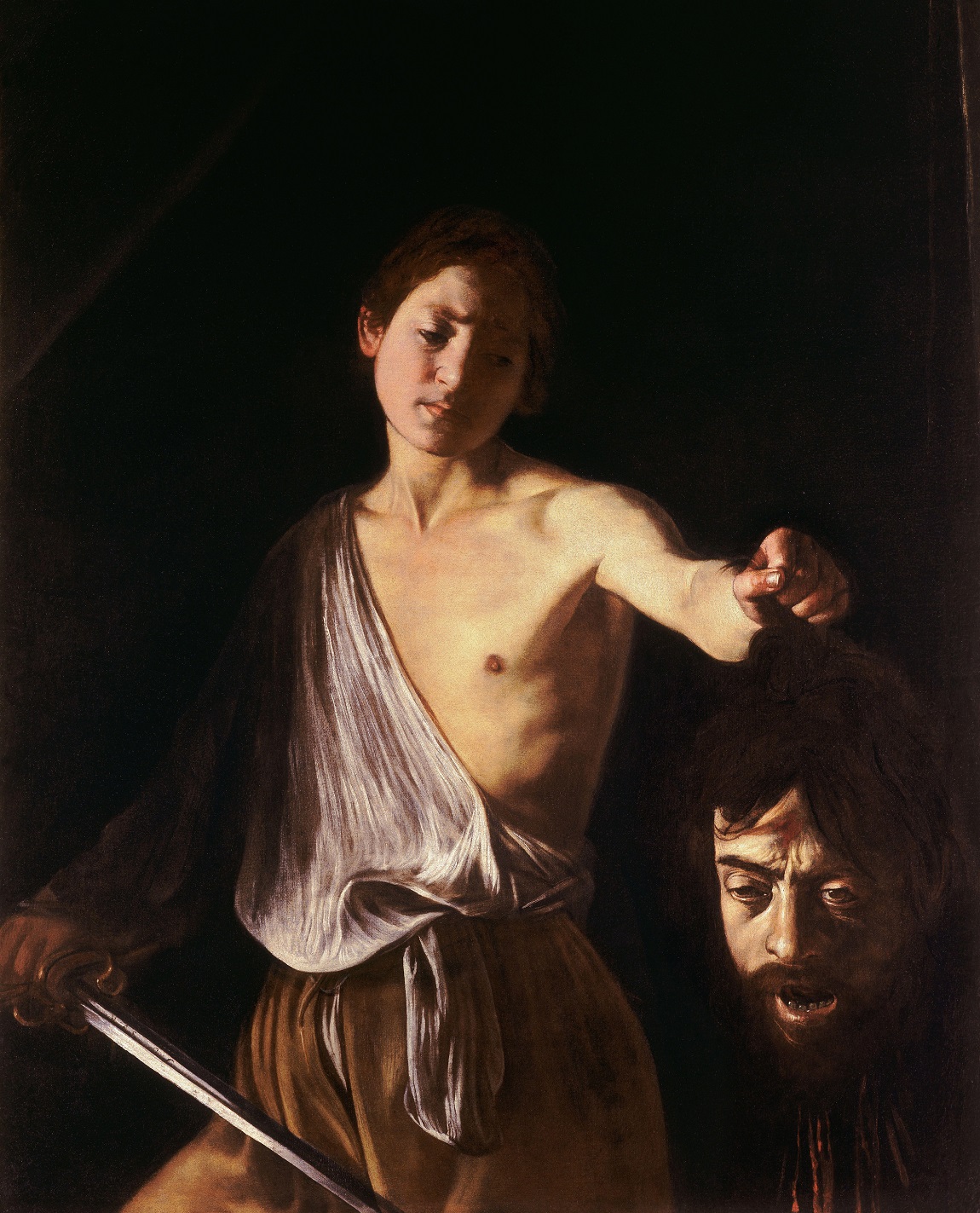 5. Sacred and Profane Love by Titian

A beautiful painting becomes even more interesting when there’s a puzzle, and few paintings are as puzzling as this work by Titian. Numerous details cry out for interpretation, but no art historian has yet managed to offer a full explanation. The further one examines the work, the more symbols are revealed, from the ancient carvings on the stone basin to the miniscule hunting scene in the background.

More fundamentally, it’s still not clear which of the two female figures is meant to be Sacred and which Profane Love. The one on the right is nude and sensual, suggestive of amorous desires, but she also holds a smoking lamp, symbol of divine purity. Her clothed counterpart carries a sprig of myrtle, a plant sacred to both Venus, goddess of love, and Demeter, the matronly deity of agriculture.

In the end, the title might be a complete red herring: it isn’t attested until a century after Titian died, so we can’t be sure what the artist originally called it. Although for now the painting must remain an enigma, Sacred and Profane Love is clearly a masterpiece of Renaissance art and an obvious highlight of the Borghese Gallery. Few other paintings by Titian so clearly demonstrate his mastery of drapery and his sensitive treatment of human flesh.

Entrance to the Borghese Gallery is strictly controlled and the museum limits the number of visitors at any one time. Visits are in two-hour blocks; at the end of each the entire gallery is emptied before the next group is allowed in.

Depending on availability, it is sometimes possible to purchase tickets on the day, but reservations are strongly advised. The most effortless option is to book a Borghese Gallery tour; not only will we take care of all entry tickets and reservations, but your guide will make sure you make the most of your limited time.

How to Get to the Borghese Gallery

The easiest and most scenic way to get to the Borghese Gallery is to walk through the surrounding gardens: take Metro A to Flaminio station, just north of Piazza del Popolo. From there, it’s a scenic 20 minute walk through the (sign-posted) park of the Villa Borghese.

If you’re in a hurry, you can also take a taxi directly to the museum. The address of the Borghese Gallery is simply Piazzale del Museo Borghese.

There is no dress code for the Borghese Gallery. However, all bags must be checked in the museum’s cloakroom. While this service is free, the wait to deposit and collect your belongings can be long, so it’s best to travel light.

To learn more about Cardinal Scipione, read our article about the history of the Borghese Gallery