Fake Domes and Heavenly Visions: the incredible illusionistic frescoes of Sant’Ignazio in Rome 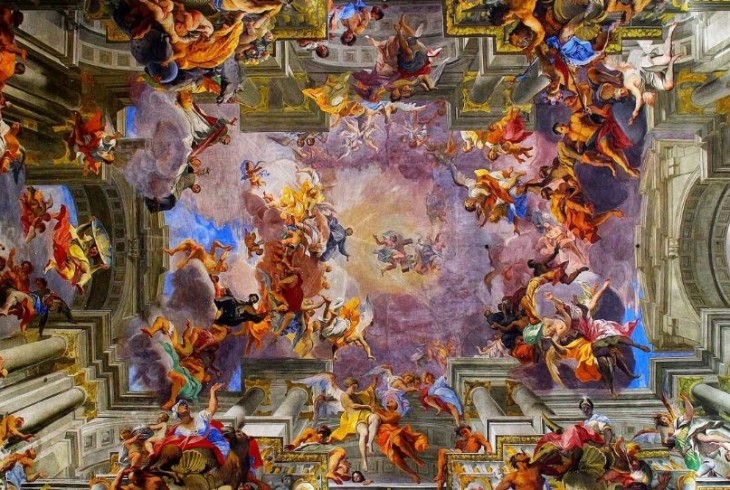 Not all of the most beautiful artworks in Rome are hidden away in art galleries and museums. One of the most impressive and surprising artistic achievements anywhere in the city are the massive illusionistic frescoes that cover the entirety of the vaulted ceiling of the church of Sant’Ignazio in central Rome, one of the grand spiritual hubs of the powerful Jesuit Order. The dazzling frescoes celebrating the holiness and missionary vision of the order’s founder Ignatius Loyola were the brainchild of Andrea Pozzo, a Jesuit lay-brother and painter who dedicated 15 years of his career to the church in the late 17th century, and are amongst the highlights of the dazzling era of the Roman Baroque.

Soldiers of God: The Rise of the Jesuits in Rome 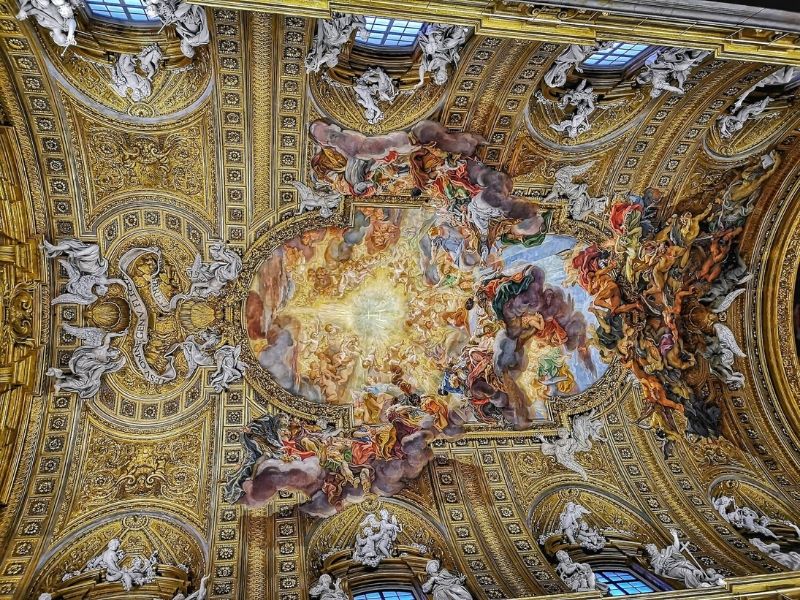 Many of Rome’s largest and most impressive churches owe their genesis to the 17th century, when a raft of increasingly wealthy religious orders founded to spread the Catholic message across the world began to make their mark on the Eternal City.

The most important of these was the Jesuit Order: the Jesuits emerged during the feverish period of the Reformation and subsequent Counter-Reformation, when embattled Catholicism was seeking to reassert its legitimacy as the true heir to Christianity’s apostolic mission in response to the challenge of Protestantism. Founded by Ignatius of Loyola, the missionary Jesuits soon spread to every corner of the world in the 16th and 17th centuries, and commissioned a series of enormous churches in Rome to act as their home bases.

You might have visited their mother church, Il Gesù, in central Rome: built in 1550, it’s a dazzling construction whose interior glitters with gold and spectacular paintings, including Giovanni Battista Gauli’s extraordinary ceiling.  But no less impressive was the huge church they would build in honour of their founder a century later.

A Church Fit for a Saint: Sant’Ignazio al Campo Marzio 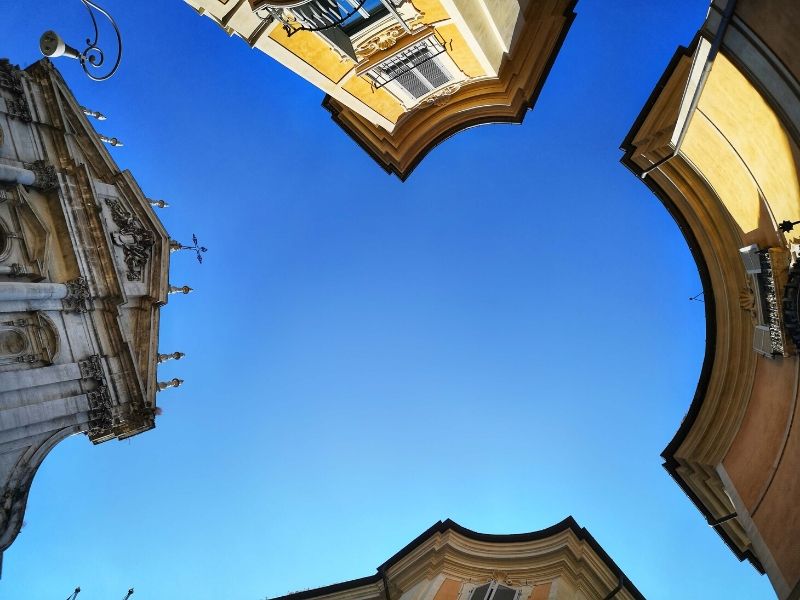 In order to provide the ready supply of missionaries required to carry out their worldwide missions of preaching and conversion, the Jesuits founded a series of colleges across Italy where they trained young men in the arts of theology and oratory. The most important of these was the immensely popular Roman College, and the Order soon found itself in need of a new space to accommodate the spiritual needs of their young charges.

Thanks to a generous papal grant offered up in the wake of Ignatius’ canonisation in 1622, the Jesuits drew up plans for a massive new church to be built across the road from the College. The enormous and overly ambitious  edifice would take decades to be completed however, and funds ran out a number of times along the way.

Plans for a magnificent dome to cap the edifice had to be abandoned when cash finally ran dry in 1642, but the ever-inventive Jesuits weren’t to be denied their spectacular centrepiece – in place of the out-of-their-price-plan dome, the Order turned to the lay brother Andrea Pozzo to paint a fake one onto the ceiling instead! 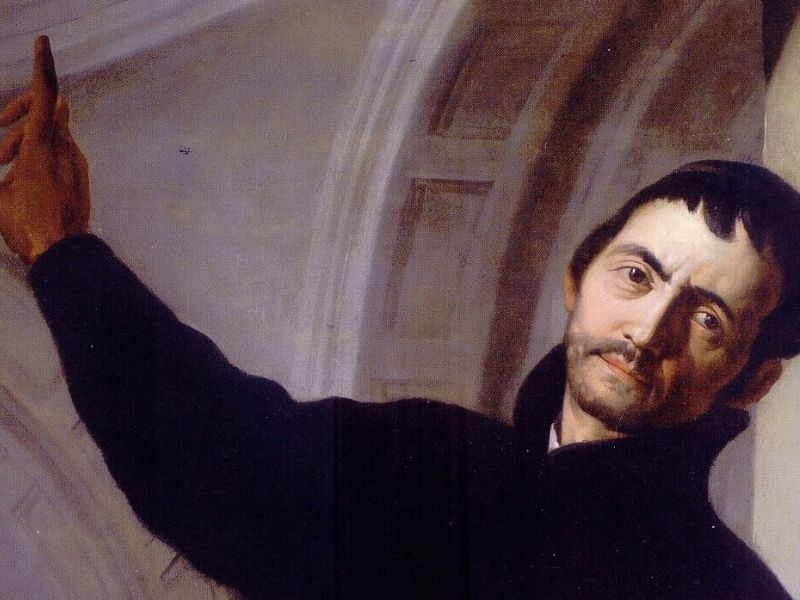 Pozzo was what today we’d describe as a Renaissance man, easily combining his spiritual calling as a devout Catholic and lay brother with the practical concerns of a professional artist. Over the course of his career he travelled widely in the contested lands of central Europe where battles raged over whether Catholicism or Protestantism was the true faith, doing his bit for the Roman cause by adorned many churches and palaces with frescoes exalting Catholicism.

In addition to his skills as a painter Pozzo was also an expert in mathematics, and his detailed treatises on theories of perspective were highly influential in the development of illusionistic techniques in painting, known as trompe l’oeil. When he was put in charge of the interior decorations at Sant’Ignazio in 1684, Pozzo had the chance to put his theories into practice on a grand scale - writing his name into the storied pages of the history of art in the process.

The Fake Dome of Sant’Ignazio 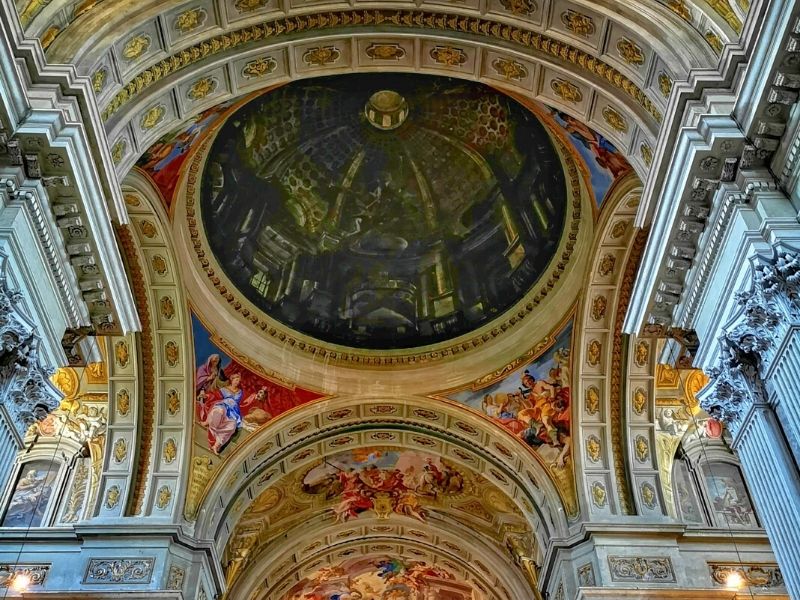 As you enter the church’s yawning nave, you might not notice anything amiss. Start walking down the nave towards the altar, and the dome gradually comes into view. Criss-crossed by supporting ribs and supported by columns, the dome even appears to have a lantern at the top letting light stream into the cupola.

When you get too close to the altar, however, everything falls apart, and the game is up – the dome is a perspectival illusion, painted onto the completely flat ceiling of the crossing!

The illusion is extremely convincing, and has fooled many a visitor to the church. By placing the vanishing point of the illusion towards the end of the fresco rather than the centre, the dome appears to be real and visible in 3 dimensions as you walk towards it down the nave. The effect only collapses when you’re near the altar and you can look directly upwards – a bit like peering behind the wizard of Oz’s curtain.

The Whole World in Microcosm: the Missionary Allegory of Sant’Ignazio 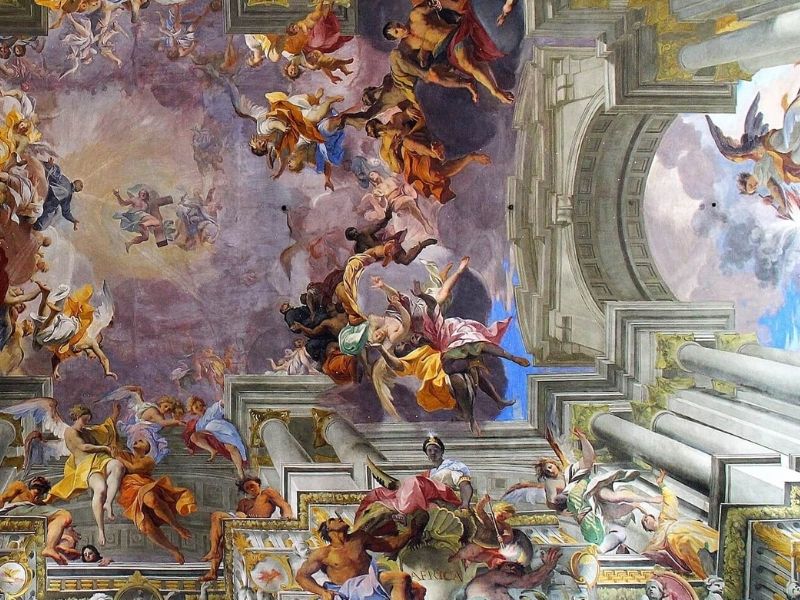 Not content with wowing his contemporaries with the incredible fake dome, Pozzo would also provide an extraordinary and massive illusionistic fresco for the vault of Sant’Ignazio’s nave.

In one of the most impressive pieces of artistic illusionism ever painted, Pozzo manages to make the entirety of the basilica’s massive ceiling disappear, opening up an entirely convincing vista directly into the celestial world above. To create the illusion, Pozzo illusionistically extended the real architecture of the church vertically upwards into the pictorial space of the ceiling, making the basilica appear twice as tall as it really is.

This fictive architecture then in turn opens up into a vision of the heavens, where the Jesuit founder Ignatius of Loyola is perched on a cloud carried aloft by angels as he makes his way to God’s divine realm. As Ignatius is heading upwards to eternal beatification, heretics and sinners of all stripes are tumbling down towards hell just as quickly.

On each of the four sides of the vault appears a personification of the world’s known continents: Asia rides a camel, whilst Africa is seated on a crocodile; America wears a feathered head-dress and holds a bow and arrow, whilst Europe wears a royal crown and holds aloft a sceptre of power. As a contemporary biography recounts, Pozzo desired to ‘represent the great zeal of St. Ignatius in propagating the Catholic faith throughout the world’ – but also to leave viewers in no doubt that Europe was the rightful master of the earth, ruling over the four corners of the globe by divine decree.

The age of global exploitation had well and truly begun.