A Guide to the Spanish Steps in Rome: Everything You Need to Know About Rome’s Most Iconic Staircase 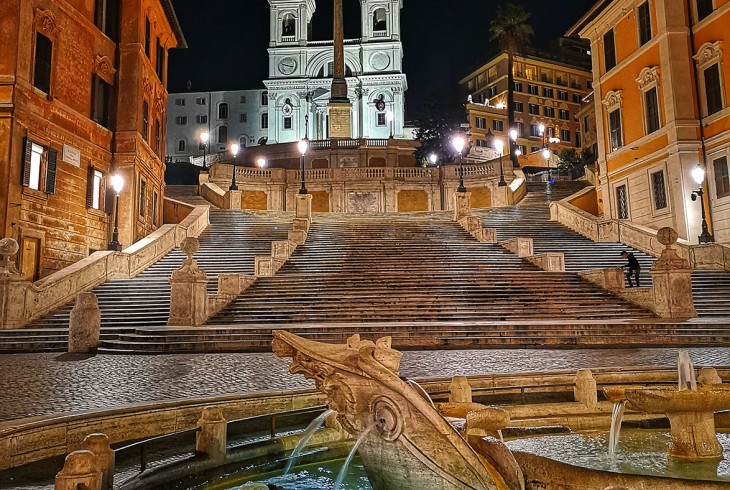 There can be few sights in the world more romantic than the dazzling sweep of the Spanish Steps. One of the great masterpieces of Baroque urban design, Rome’s most iconic staircase has been a meeting place for artists and poets, lovers and layabouts for nearly three centuries. From the tuberculosis-stricken heartthrob of the Romantic age John Keats to Audrey Hepburn’s bored princess looking for trouble in Roman Holiday, a laundry list of the great and the good have whiled away innumerable hours in the long shadow of the spectacular staircase. It’s a good bet that the Spanish Steps will be one of your first ports of call when you reach the Eternal City too – read on for our guide to what you need to know before you go.

What’s in a name? The French history of the Spanish Steps

What’s so Spanish about the Spanish Steps? The short answer is not much. The English name of the staircase is actually pretty misleading, as the Spanish Steps began life as a project designed to celebrate the French crown. Cosmopolitan Rome in the early modern period was a rich tapestry of different national communities, and certain areas of the city were often subject to the jurisdiction of the mother country as much as they answered to any local authority. From the Renaissance onwards the area at the top of the Pincian hill was French property, and in 1502 the French king Louis XII began work on the church that still towers over the Spanish steps today, Santa Trinità dei Monti. The French church gives its title to the Italian name for the staircase – La Scalinata di Trinità dei Monti.

Throughout the 16th and 17th centuries, the elegant French church was only accessible from the densely populated quarter of the city below via a steep path up a rather unsightly grassy slope, a wholly unsatisfactory arrangement both for the French court and for the Minimite friars responsible for its upkeep. In response to a massive bequest of 20,000 scudi from the will of French diplomat Étienne Gueffier in 1660, the Franco-Italian diplomat Cardinal Mazarin requested drawings from the city’s most eminent architects, including Gianlorenzo Bernini and Carlo Rainaldi, for a plan of a monumental staircase that would link the church to the city below. These original ideas were conceived of as a celebration of Louis XIV, and were centred around a large equestrian statue of the French king. The pope was unsurprisingly aghast, and the controversial plan never got off the ground. It would be another half a century before an architectural competition was held to come up with a permanent solution to the area’s urban topography.

So where do the Spaniards come in? Well, the area directly beneath the church was the centre of Spanish life in the Baroque city. Centred around the imposing Palazzo di Spagna – Spain’s embassy to the Holy See – the large piazza came to be known as Piazza di Spagna, a name it still carries to this day. It’s the proximity of the famous Piazza that gives the staircase its English name.

Who actually designed the Spanish Steps, then, and when?

With the changing diplomatic landscape of the early 18th century, the revitalised project for linking the French religious institution at the top of the hill with the Spanish dominated quarter below took on an important political dimension. The perennially bellicose French and Spanish crowns signed a peace treaty in 1720, and the Steps became a visible sign of the new accord between the superpowers.

The winning entry was submitted by the relatively unknown Roman architect Francesco de Sanctis, whose compromise design pleased both the presiding Pope Innocent XIII (like his predecessor wary of a monument being erected under the auspices of a rival king) and the French faction. Look out for the lilies and eagles that alternate in the ornamentation of the steps: fulfilling a delicate balancing act between church and secular power, the lily is symbolic of the French monarchy, whilst the eagle was Innocent’s heraldic emblem. Construction finally got underway in 1723 and was completed in time for a grand inauguration during the Jubilee year of 1725.

De Sanctis’ brilliant design transformed the area’s uncompromising terrain into a dramatic and unified work of urban theatre:  the staircase’s 135 steps appear to flow down the slope in rippling cascades of liquid marble framed by elegantly bulging balustrades and balconies. In addition to being visually spectacular, de Sanctis’ proposal was also rich in spiritual resonances. Abandoning their hopes of celebrating Louis directly, the French contented themselves with a design that was more in keeping with the religiosity of the church above - three flights of steps are each divided into three sections by broad landings, evoking the mystically indivisible holy Trinity of God, Christ and the Holy Spirit.

Make the climb to the top and drink in one of the Eternal City’s finest views in the shadow of the remarkable Sallustian obelisk, an ancient Roman creation designed in imitation of an Egyptian monolith that originally graced the gardens of the Roman historian Sallust. If you’re lucky enough to visit Rome in the Spring, you’ll find the Steps transformed into a riot of perfume and colour as they are bedecked with hundreds of blooming azaleas.

The Spanish Steps and the Grand Tour

The Scalinata was an immediate hit, and quickly became a voguish hangout for all walks of life in the city. The area surrounding the steps was already popular with international visitors to Rome, and English travellers in particular habitually chose the area for their lodgings as they made their way across Europe on the Grand Tour – a vital part of the cultural education of any young aristocrat. An indispensable souvenir of their sojourns in what locals scathingly described as the ghetto de l’inglesi (the English ghetto) were the portraits that they commissioned from famous artists residing in the area, Pompeo Batoni and Angelica Kauffmann foremost amongst them. For a fee, Batoni surrounded his sitters with famous antiquities as proof of their classical bona fides.

Historic Caffè Greco on nearby Via Condotti was the cosmopolitan hangout of choice, whilst later generations could quell their homesickness with a visit to Babington’s English Tearooms on the Piazza itself, founded by two English women in 1893. Both institutions are still in existence today, as is the lux Hotel d’Inghilterra, founded midway through the 19th century specifically to cater to the area’s wealthy expat set.

What’s the deal with the fountain at the bottom?

The square at the foot of the Spanish Steps is dominated by one of the city’s most charming fountains. Known as the Fontana della Barcaccia (little boat), the fountain predates the Steps by about a century and is the work of Pietro Bernini – the father of Baroque master Gianlorenzo, who gave his dad a hand in some of the decorative detailing. The fountain takes the unusual form of a partially sunken boat, and owes its genesis to a legendary event that took place during the devastating Christmas day flood of 1598. The story goes that the Tiber’s floodwaters rose so high that they carried a barge all the way from the river as far as Piazza di Spagna. Having reached so far into the city’s historic centre, the floodwaters miraculously receded. 30 years later, the Barberini Pope Urban VIII commissioned Bernini to mark the spot with a fountain – look out for the Barberini’s heraldic bees decorating the boat. The semi-sunken nature of the fountain also proved to be an ingenious solution to a thorny problem that had long frustrated attempts to build a grandiose fountain in the area – the stubbornly low water pressure that made impressive jets of water impossible to achieve. Bernini’s design transformed an apparently intractable shortcoming into an essential feature of the fountain.

What is there to see around the Spanish Steps?

Thanks to its position at the very centre of Rome’s urban bustle, there is plenty to see in and around the Spanish Steps. Pop into historic Caffè Greco and Babington’s Tea Rooms to immerse yourself in the elegant world of 19th century Rome; also on the Piazza, to the right of the Steps at number 26, is the Keats and Shelley Memorial House. The English Romantic poet John Keats resided here during his ill-fated sojourn in the city where he died of tuberculosis in 1821, and today the palace is home to a museum dedicated to the poet and his close friend Percy Bysshe Shelley. Amongst the displays, look out for the former’s death mask. At the square’s southern edge you’ll find the imposing Colonna dell’Immacolata, commissioned by Pope Pius IX in 1857 to celebrate the recently confirmed Catholic doctrine of the Immaculate Conception. Leading off the Piazza, meanwhile, is well-heeled Via Condotti, Rome’s most fashionable shopping street and host to the flagship stores of the world’s biggest fashion houses.

At the top of the Steps, the Renaissance church of Santa Trinita dei Monti is well worth a look: inside gothic architecture alternates with some seriously impressive artworks, including Daniele da Volterra’s mannerist masterpiece Descent from the Cross. Next door to the church is the sprawling Villa Medici, now home to the French Academy and regular host to art exhibitions.

Look but don’t sit: What are these new rules about the Spanish Steps I’ve heard about?

The Spanish Steps are amongst Rome’s most popular and visited landmarks, and with such heavy foot traffic comes some inevitable pitfalls. The monument recently underwent a multimillion euro restoration to restore it to its gleaming best, and in order to protect the steps from new damage visitors are no longer permitted to sit on them. Guards will whistle at you and make you get up if you attempt to take a spill on the stairs, so don’t bother trying. It goes without saying that stopping off for an impromptu picnic or gelato is right out too – make sure to follow the rules or you might end up being slapped with en eye-watering €400 fine.

We hope you enjoyed our online guide to the Spanish Steps! If you’re planning a visit to Rome and fancy visiting the iconic landmark in the company of an expert local guide capable of filling in the gaps, then get in touch with Through Eternity today and check out our Rome at Twilight walking tour.