Hark now hear the angels sing…In a city of a thousand churches and the epicentre of the Catholic faith for nearing 2,000 years, it comes as little surprise that Rome is chock-full of magnificent depictions of the story of Christ’s infancy from every age and era of art. Keeping in the festive spirit this week, in our latest blog we’re profiling one of our favourite seasonal paintings in the Eternal City: Pinturicchio’s wonderful Renaissance imagining of the Nativity in Santa Maria del Popolo. Recently restored to its former glory, the church itself is a treasure-trove of painterly, sculptural and architectural masterpieces, and is a must-visit on any trip to Rome!

Located just inside what was historically Rome’s most important gate on the city centre’s northern edge, there is no avoiding Santa Maria del Popolo. The beautiful 15th-century facade stands proud guard over the piazza of the same name, the spot where generations of visitors arriving in Rome caught their first glimpse of the Eternal City as they passed through the Porta del Popolo piercing the mighty ancient Aurelian walls. 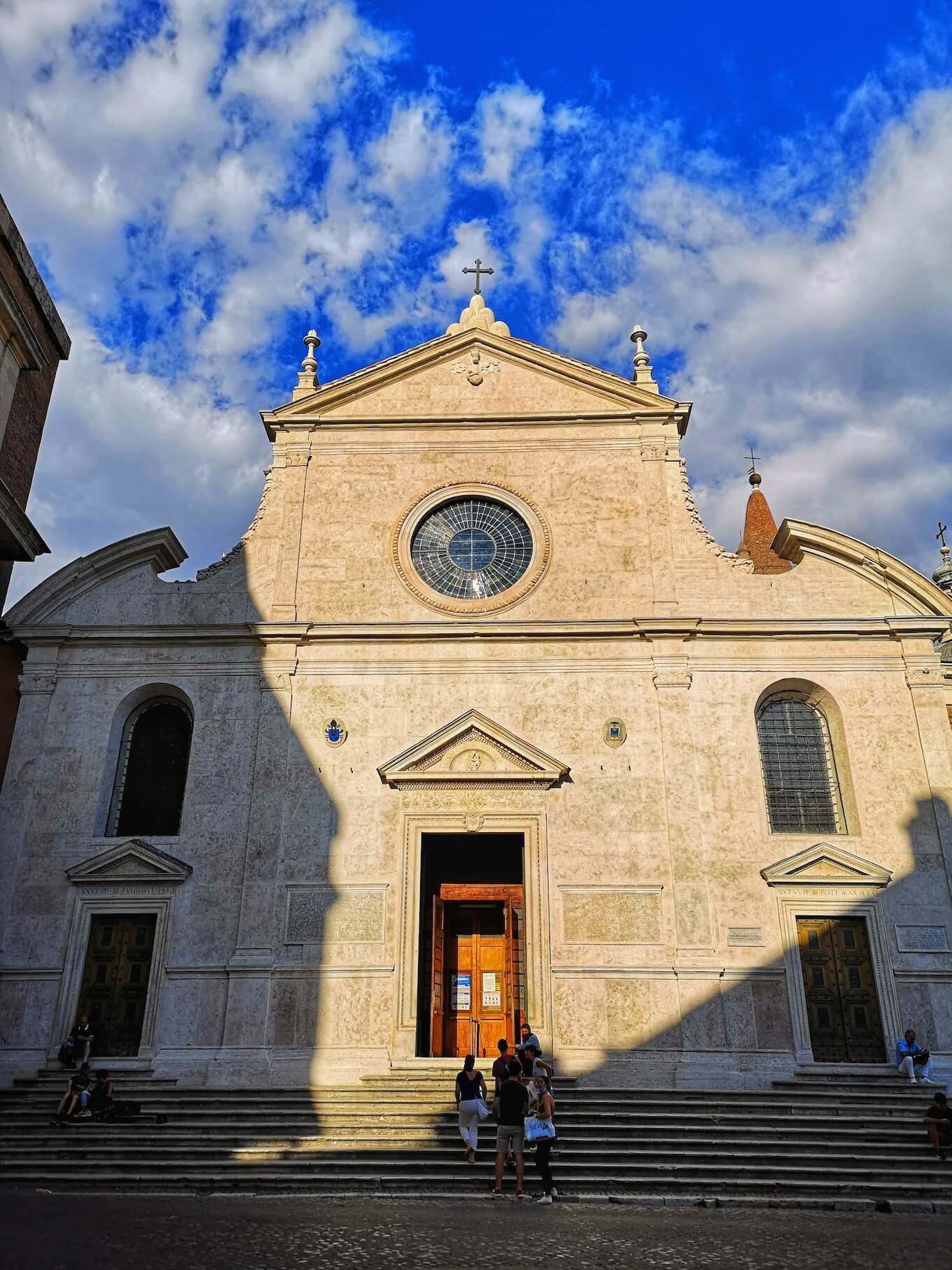 According to a striking legend that recounts the church’s venerable founding, Santa Maria del Popolo itself had a dark genesis. Early modern accounts relate that after the wicked ancient emperor Nero committed suicide, he was entombed in his family mausoleum on the site of the church-to-be. Slowly buried by the passage of time, eventually an enormous walnut tree grew up over the mausoleum’s foundations. The tree quickly absorbed the still malevolent spirit of the evil emperor, and soon attracted all manner of pagan demons in the guise of black crows to roost in its ghoulish boughs, victimising all who dared pass beneath.

Enter Pope Paschal II who, thanks to a dream inspired by the Virgin Mary, led a procession to the cursed tree, which he promptly exorcised. The resident demons fled in terror, and the tree was uprooted. There, amidst the blasted roots, were the remains of Nero. No sooner was the emperor chucked into the Tiber then a chapel was built upon the site of the fallen tree, and religious worship in what would become Santo Maria del Popolo was born. 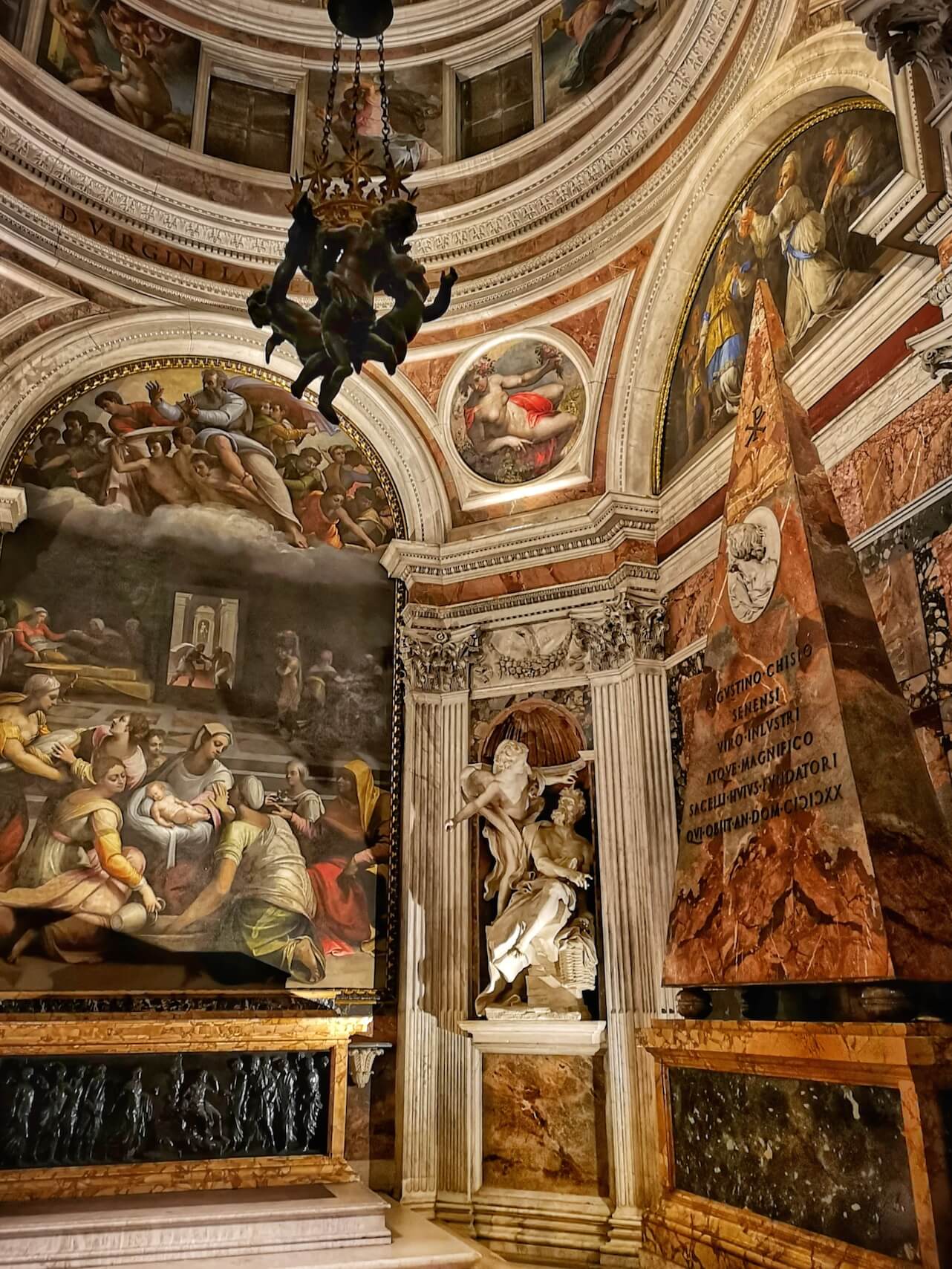 The tall-tale is certainly an entirely fanciful work of fiction, and no documentary evidence records a church here before the 13th century. But whatever its true origins, what isn’t in doubt is Santa Maria del Popolo’s pre-eminent position in the cultural and artistic life of the city. Most famous for Caravaggio’s extraordinary twin canvasses of the martyrdoms of Saints Peter and Paul in the Cerasi Chapel as well as the Raphael-designed and Bernini decorated Chigi chapel, no-less impressive but far less appreciated is the Della Rovere Chapel on the right-hand side as you enter the church. One of the most spectacular and best-preserved ensembles of 15th-century art in Rome, the chapel is also known as the Chapel of the Nativity for the wonderful central depiction of Christ’s infancy by the hand of Pinturicchio.

Santa Maria del Popolo had undergone a full-scale reconstruction in the middle of the fifteenth century at the behest of Pope Sixtus IV (also the man responsible for the construction of the Sistine Chapel). The Pope’s relative Domenico della Rovere took advantage of his family connections to purchase a chapel in the new church, and employed the Umbrian master Pinturicchio to come up with the decorations.

Pinturicchio was one of the squadron of talented young artists that descended on Rome to answer Pope Sixtus’ call for painters to work on the first fresco cycle of the Sistine Chapel, and he was the only member of the group that chose to stay on in the Eternal City to open a workshop of his own. One of the finest interpreters of the spirit of the new age, Pinturicchio quickly became synonymous with the first wave of Renaissance painting in Rome, responsible for the magnificent decorations in the Vatican’s Borgia apartments as well as a beautiful fresco cycle in Santa Maria in Aracoeli depicting the life of Saint Bernardino of Siena amongst other highlights.

Dedicated to St. Jerome, the hexagonal della Rovere chapel is topped by a rib vault, picked out in yellow and decorated with floral motifs. The vaulting divides the ceiling into six compartments, each featuring a lunette portraying a different episode in the life of the saint: here he is penitentially beating his breast with a stone in the desert, there removing a thorn from the paw of the lion that would become his lifelong companion. Pinturicchio was amongst the first artists to have descended into the darkness of Nero’s recently rediscovered Domus Aurea to examine the incredible ancient decorations gracing its walls, and in Santa Maria del Popolo’s della Rovere Chapel we can see how the painter immediately started incorporating the antique ‘grotesque’ motifs he found there into his own work: theatrical masks and fantastical animals, musical instruments, shells and more snake their way across the fictive frames of the paintings. 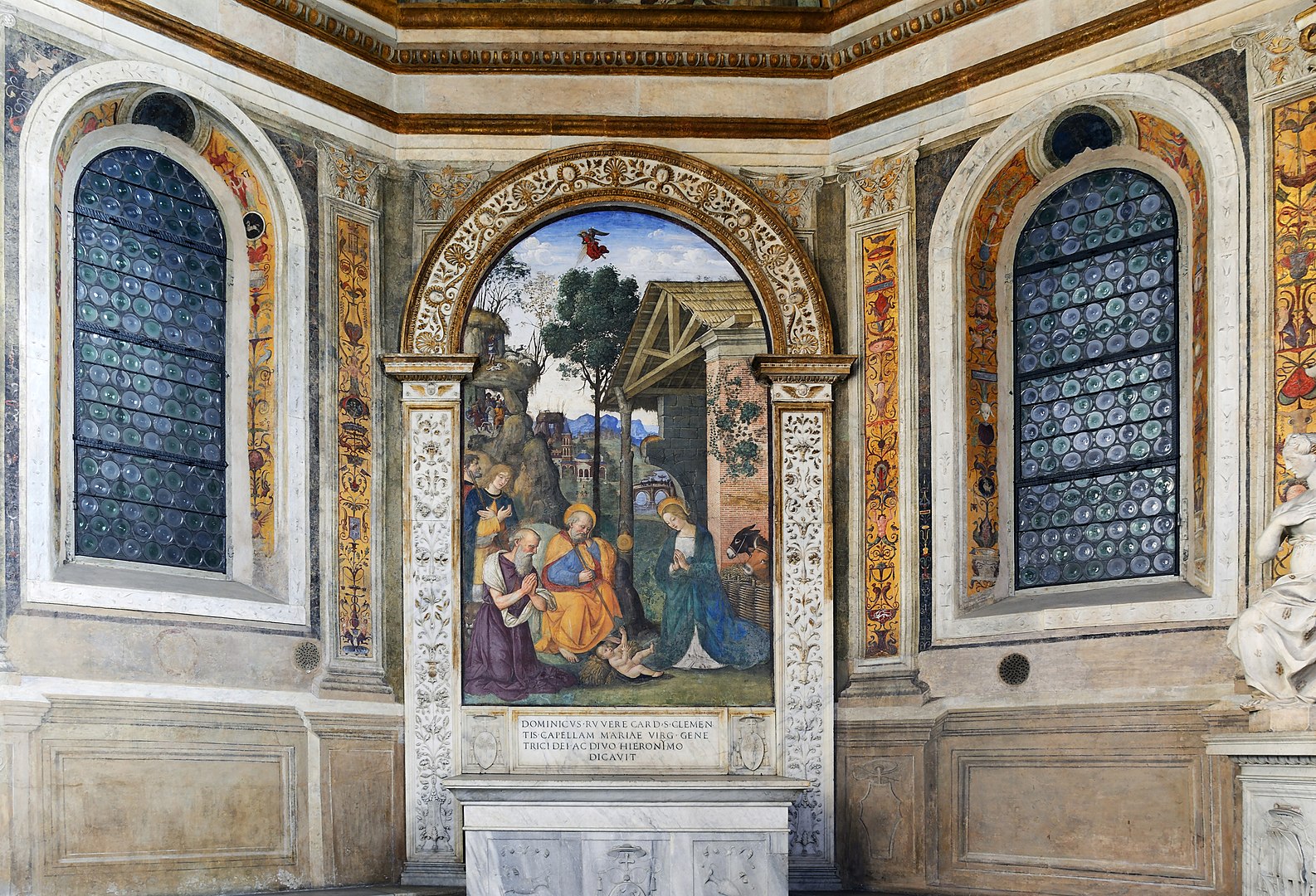 But the real highlight of the chapel is the spectacular altarpiece. The theme of Christ’s nativity might be one of the most familiar in the story of Western art, but Pinturicchio imbues the old story with vivid contemporary colour. At the centre of the composition is the baby Christ himself, a playful little tyke, kicking his legs in the air as he reclines on a makeshift pillow fashioned from a bundle of wheat (a subtle eucharistic foreshadowing) and grasps towards his pious mother, who is busily lost in prayer.

The aged Joseph sits on a rock and leans sleepily on his staff, his drooping lids indicating he is fast travelling on the road to the land of Nod - in the Renaissance the simple carpenter Joseph hardly ever seems to be able to keep his eyes open, an avuncular yet fairly ineffectual member of the Holy Family unit. Next to Joseph is a time-travelling St. Jerome: despite having been born 350 years after Christ, here he is paying his own respects to the Saviour in first-century Bethlehem. The chapel was after all dedicated to him, justifying the anachronism. 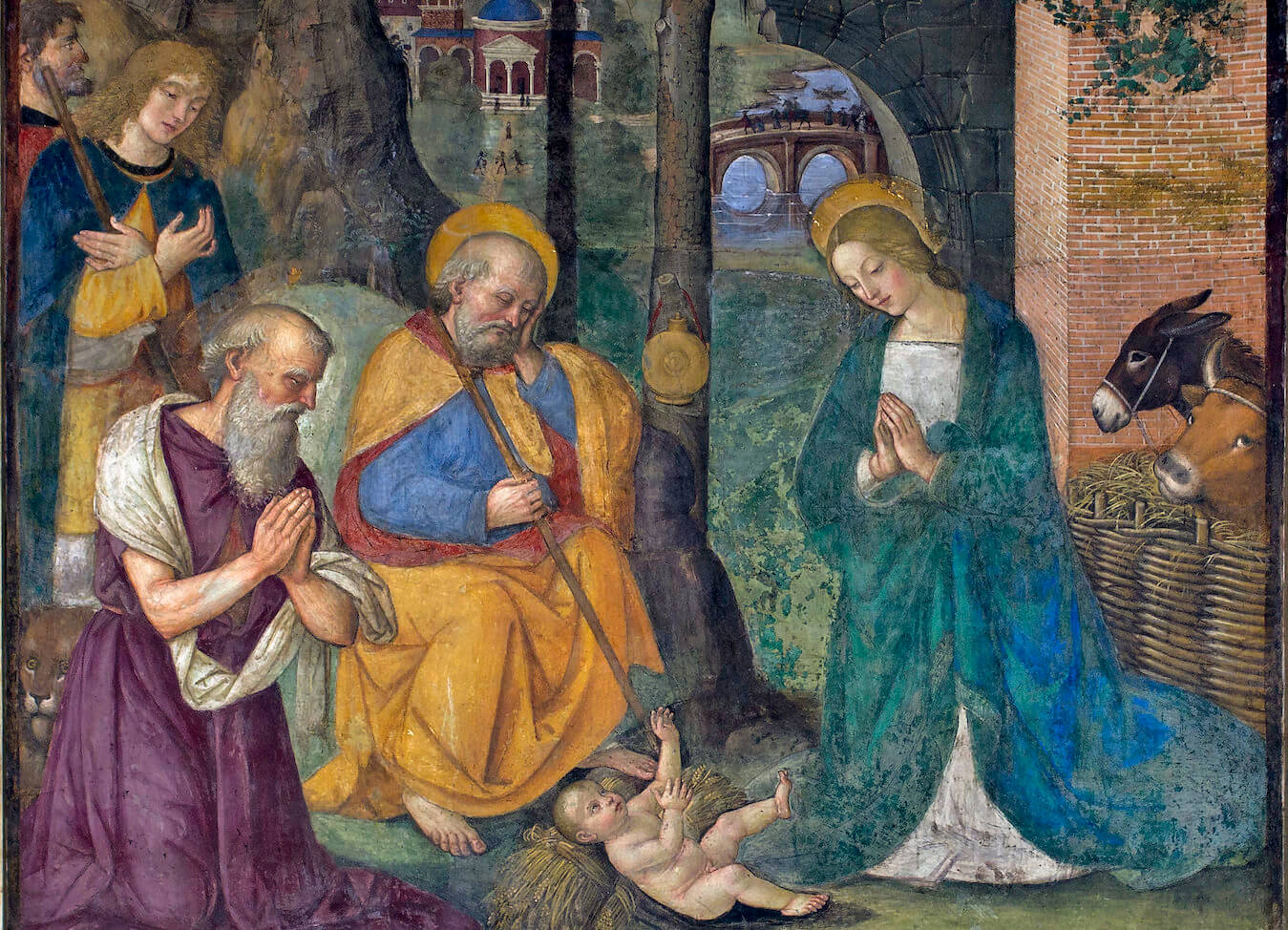 Pinturicchio's Adoration of the Child with St. Jerome in the Della Rovere Chapel

The action takes place on a sunny morning outside the stable in which Mary gave birth the night before, a construction to the south of rustic. Renaissance artists seemed to compete with one another as to who could come up with the most ramshackle barn in which to set the Nativity story - Pinturicchio’s contemporary Sandro Botticelli was a master of the genre, but Pinturicchio surpassed himself in the Santa Maria del Popolo chapel. Pinturicchio’s Bethlehem stable is a mishmash of Roman brick walls and partially destroyed stone masonry, with the blasted remains of an arch indicating that the building is little more than an abandoned ruin: an ineptly installed crossbeam holds up a thatched roof that seems ready to collapse on the sacred group below at any moment, a tree trunk precariously staving off disaster.

Look carefully into the beautiful hazy background, given depth by the technique of aerial perspective that was being perfected in these same years by Leonardo da Vinci, and you’ll be able to make out other important events from the festive season - amongst the cliffs on the left we see the procession of the Magi, wending their way through the landscape towards the Holy Family with precious gifts at the ready, whilst high in the sky above an angel appears to a group of shepherds tending to their flocks on the hills, advising them of the Messiah’s birth and setting them on their own journey to pay homage to the infant Son of God.

Our favourite details in the painting are however the humblest witnesses to the miraculous birth: peeking out at the far right of the scene are two of the most charming animals in the story of art, penned in their hay-filled stall by a rustic wicker fence. A stolid donkey gazes on the Christ child with a vaguely human expression, whilst a the sweetest ox you’ve ever seen fixes her eyes on ours with a doleful expression of comprehension. In Pinturicchio’s virtuoso take on the descent of the divine into the world of men, the miracle of the Christmas narrative found one of its most profound expressions.