This is my Body: Stefano Maderno and the Miraculous Corpse of Saint Cecilia 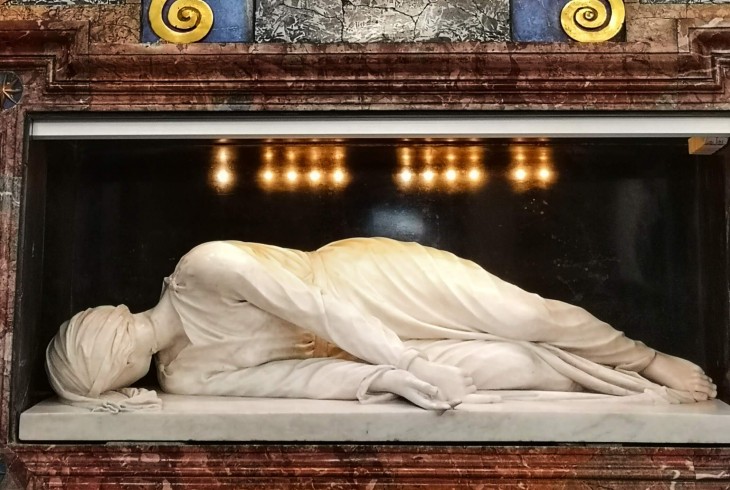 Rome, one quickly realises, is a city of saints. They have delighted generations of faithful pilgrims, and disgusted generations of firebrand reformers. One way or another, there is no escaping them. From the ubiquitous duo of Peter and Paul to scantly regarded local miracle workers known only to the most diligent hagiographers, every church and community in the Eternal City has their object of proud veneration. Hidden deep in the back-streets of Trastevere lies the basilica dedicated to perhaps the most Roman of them all. She is the patron saint of music, and her name is Cecilia. 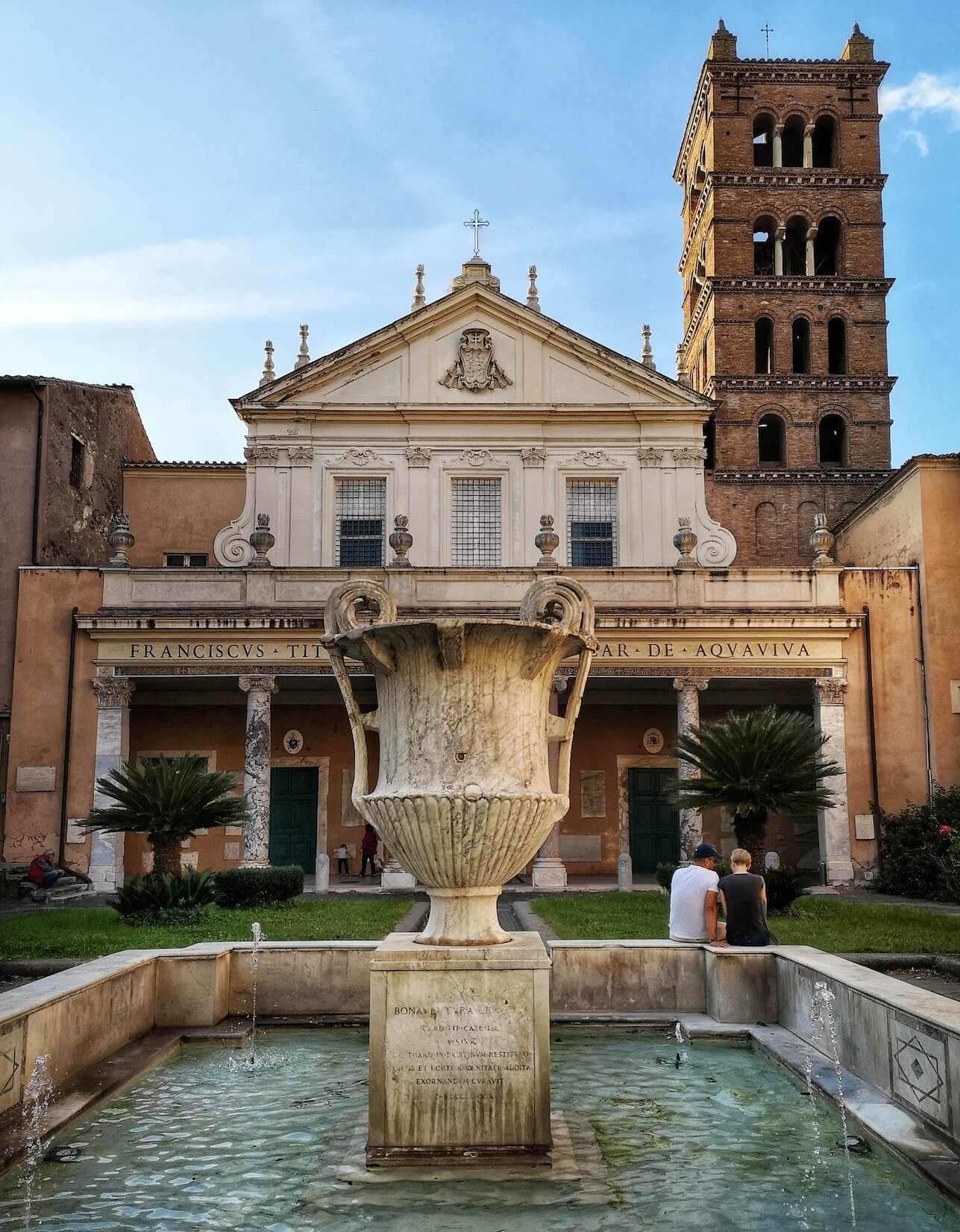 The entrance to the church of Santa Cecilia in Trastevere

Cecilia was one of the numerous Roman virgin martyrs, the so-called Brides of Christ who were persecuted during the time of Empire for their unfathomable devotion to this strange new religion. She even managed to convert her own husband to Christianity, after informing him of her life-long commitment to chastity on their wedding night. Such unconventional behaviour, especially on the part of a noblewoman like Cecilia, quickly led to official denunciation and an eventual death sentence. According to legend her execution was botched, and she survived for three days with massive injuries, preaching and converting the local populace. When she finally succumbed to her wounds, she prevailed on the pope to convert her house into a church. 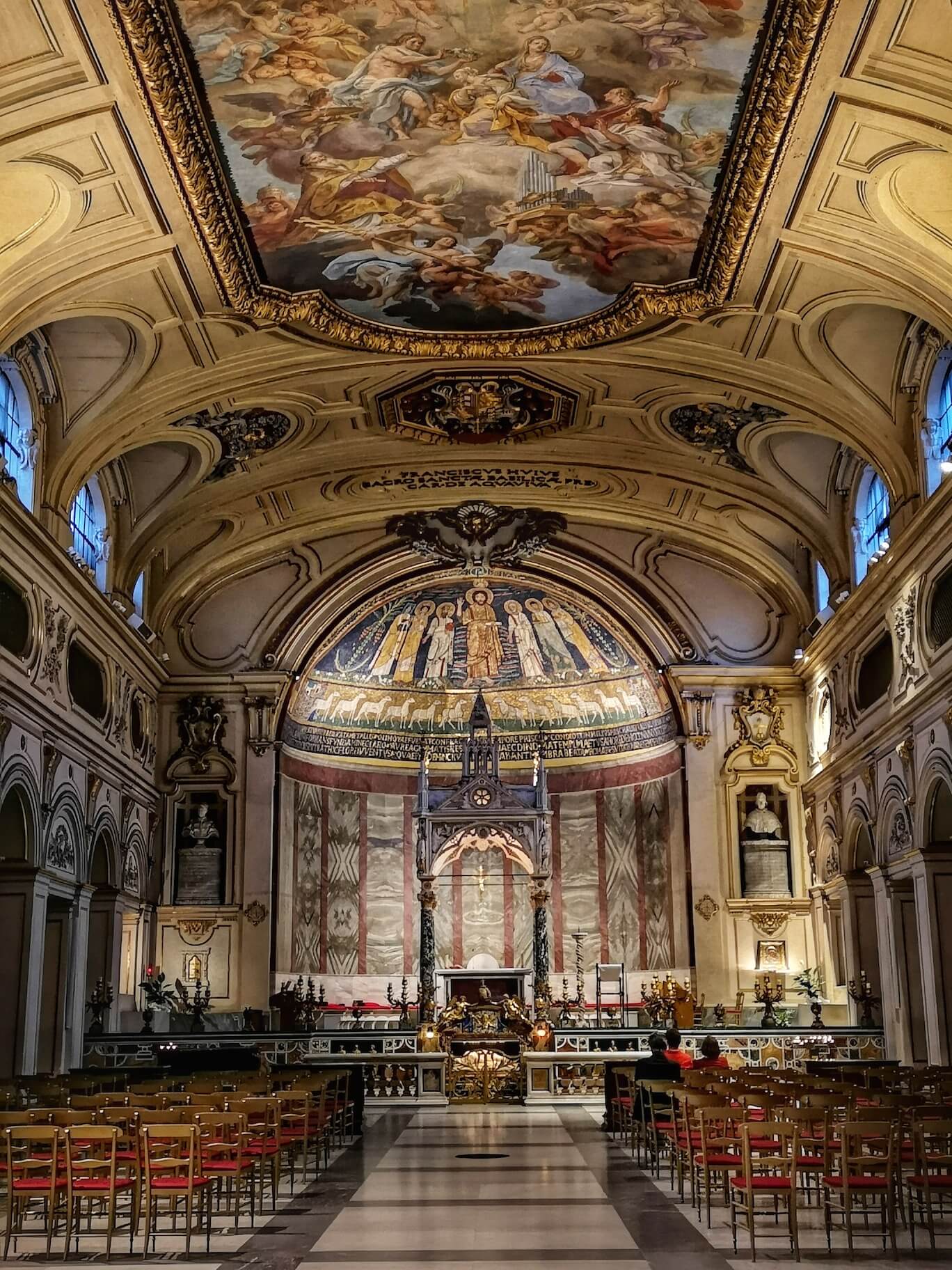 Fast forward 1,300 years, and Rome was in a ferment. In the wake of the seismic struggles of the Reformation and Counter-Reformation that had shaken Europe for the previous century, the Church hierarchy conceived the Jubilee year of 1600 as one of the greatest celebrations of the faith ever staged. The city must look her best, and the Roman cardinals had been instructed to spare no expense in restoring Rome to her former glories.

Paolo Sfondrato, cardinal of the basilica of Santa Cecilia, took his responsibility very seriously, and ordered a massive programme of renovation. In the process, his workmen unearthed the sarcophagus of Cecilia herself beneath the high altar. To the cardinal's amazement, the saint was apparently in a perfect state of preservation, immune to the rigours of time and decay which should have reduced her to dust. The delighted prelate wasted no time in using the discovery to increase the profile of his church, and in a PR move worthy of a modern guru put Cecilia on display in a massive public spectacle. The discovery of Cecilia would ensure Sfondrato's enduring legacy. 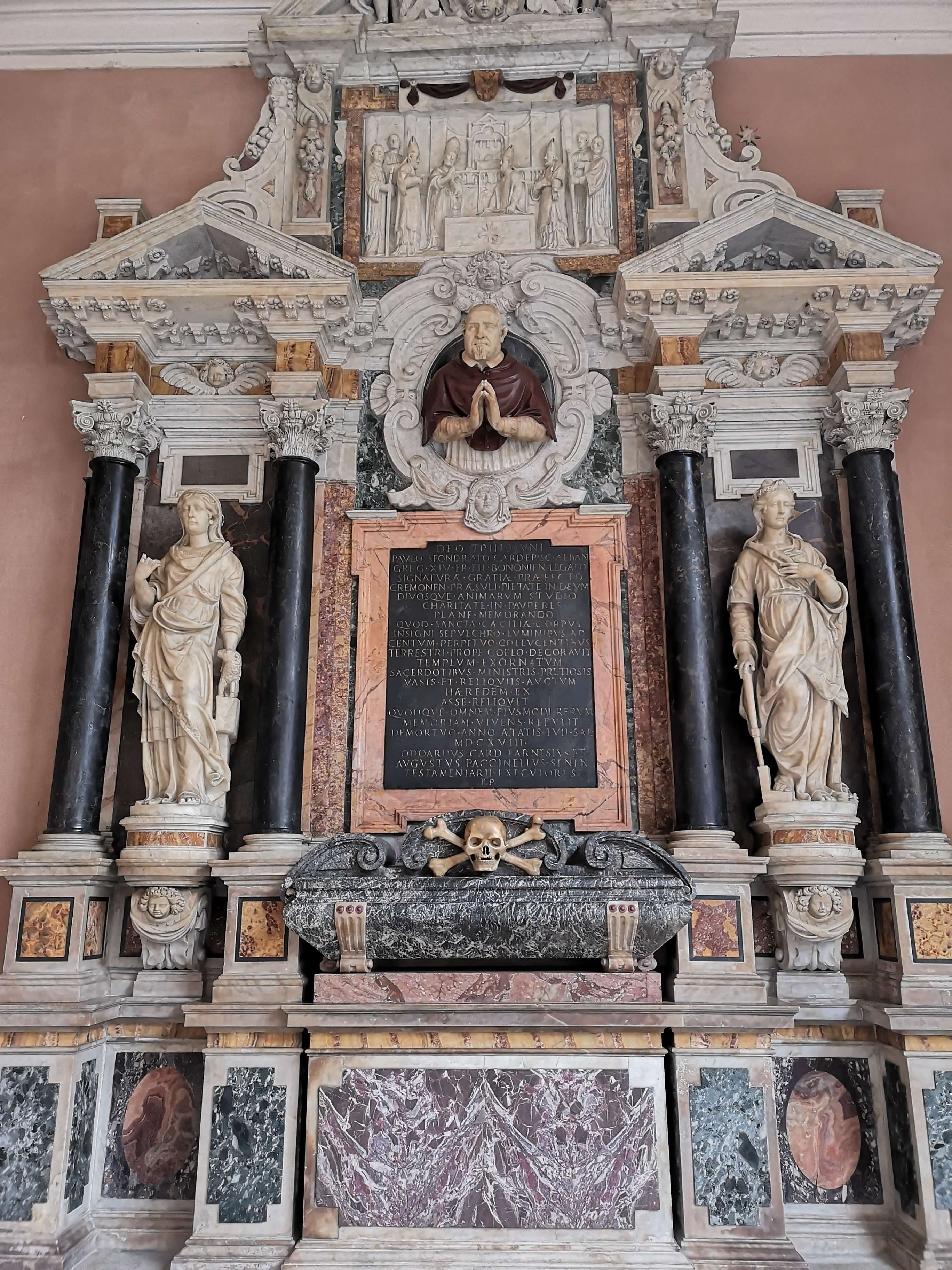 The Tomb of Cardinal Paolo Sfondrato in Santa Cecilia in Trastevere

The scenes that greeted the spectacular revelation of Cecilia's miraculously uncorrupted body were more akin to those that might herald an arriving rock-star. Mass hysteria gripped the populace, and one chronicler described how even the Swiss Guard were powerless to stem the mighty flow of pilgrims crashing through the narrow alleyways of Trastevere. A mere two days after she went on show, Cecilia was re-interred beneath the high altar of the church to protect her from unintentional destruction at the hands of her over-enthusiastic admirers. The sight of her tranquil repose was, however, to live on.

Before laying Cecilia's body to rest once more, Sfondrato commissioned the renowned sculptor Stefano Maderno to produce a statue of the saint in exactly the same pose as that in which he found her. What Maderno came up with remains one Rome's finest artistic masterpieces, a complex interrogation of the nature of sainthood and the uncomfortably fetishistic connotations inherent to relic worship in general.

Cecilia's marble avatar reveals a beautiful young woman curled into the deathly repose of eternal sleep, a turban wrapped around her head and a gash in her neck that signifies her gruesome end. She is displayed in what seems half sarcophagus and half museum display case, a voyeuristic insight into the private world of her death; the beauty of her corpse is proof positive of her saintly credentials, immortalised for all time in inviolable marble. Her head is turned demurely away from us, eyes cast down at the cold slab on which she rests. In a game of gazes, Cecilia is an unwilling participant. 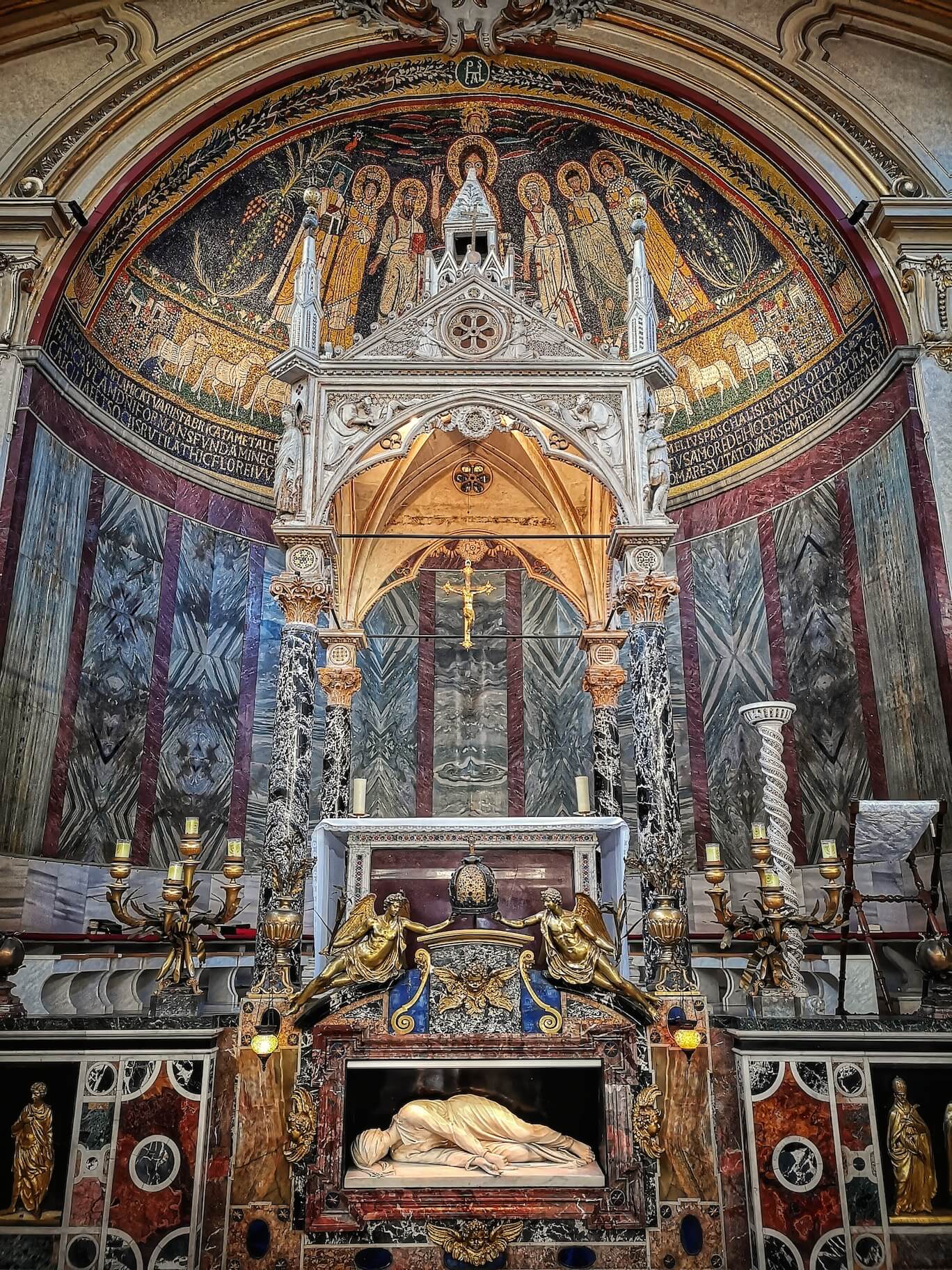 The religious impulse that drove the frenzied viewers of 1600 may be now only of interest as a historical curiosity, but our greedy consumption of Cecilia through the proxy of Maderno's wonderful work is hardly so very different. Art rather than faith may be our guiding impulse, but Maderno nonetheless gives us no option other than to gaze upon his presentation of the dead saint like some peeping-tom, and in the process compels us to re-examine what exactly it is that we are doing when we look at art. Art has its ethics, complex and entangling. In order to discover why, you owe yourself an audience with Cecilia.