The Mausoleum of Santa Costanza: Ancient Mosaics between Pagan and Christian Rome 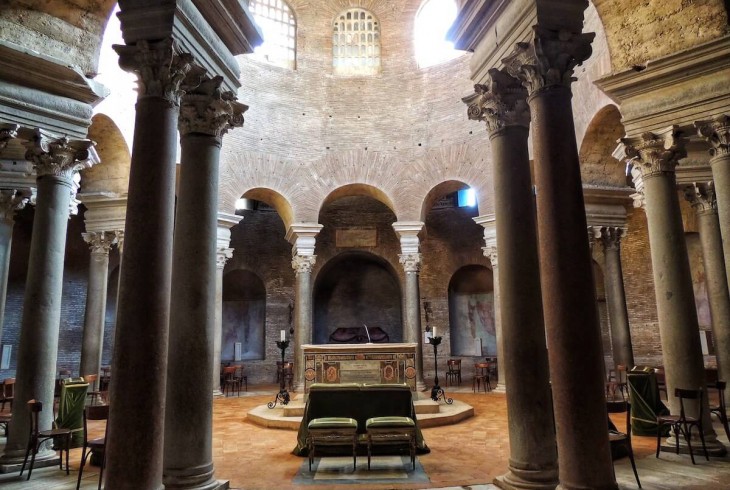 One of the finest examples of early Christian art and architecture in Rome, the stunning 4th-century mausoleum of Santa Costanza offers a vivid insight into the Eternal City’s gradual transition from pagan antiquity to Christian capital beginning in the reign of the Emperor Constantine. The vaults of the circular mausoleum are covered with marvellous 4th-century mosaics that are equal parts religious and secular, featuring doves, peacocks and creeping vines. Read on to discover why Santa Costanza is one of our favourite churches in Rome!

A Tomb Fit for an Empress

Although the church of Santa Costanza owes its current name to a corruption of Constantina, daughter of the Emperor Constantine, the precise circumstances of the mausoleum’s founding are somewhat obscure. Certainly the spectacular edifice did not begin life as a dedicated site of worship: the building’s circular form and location instead mark it out as an Imperial mausoleum, and its consecration as a church can only be dated to the mid 13th century - nearly a millennium after its construction. 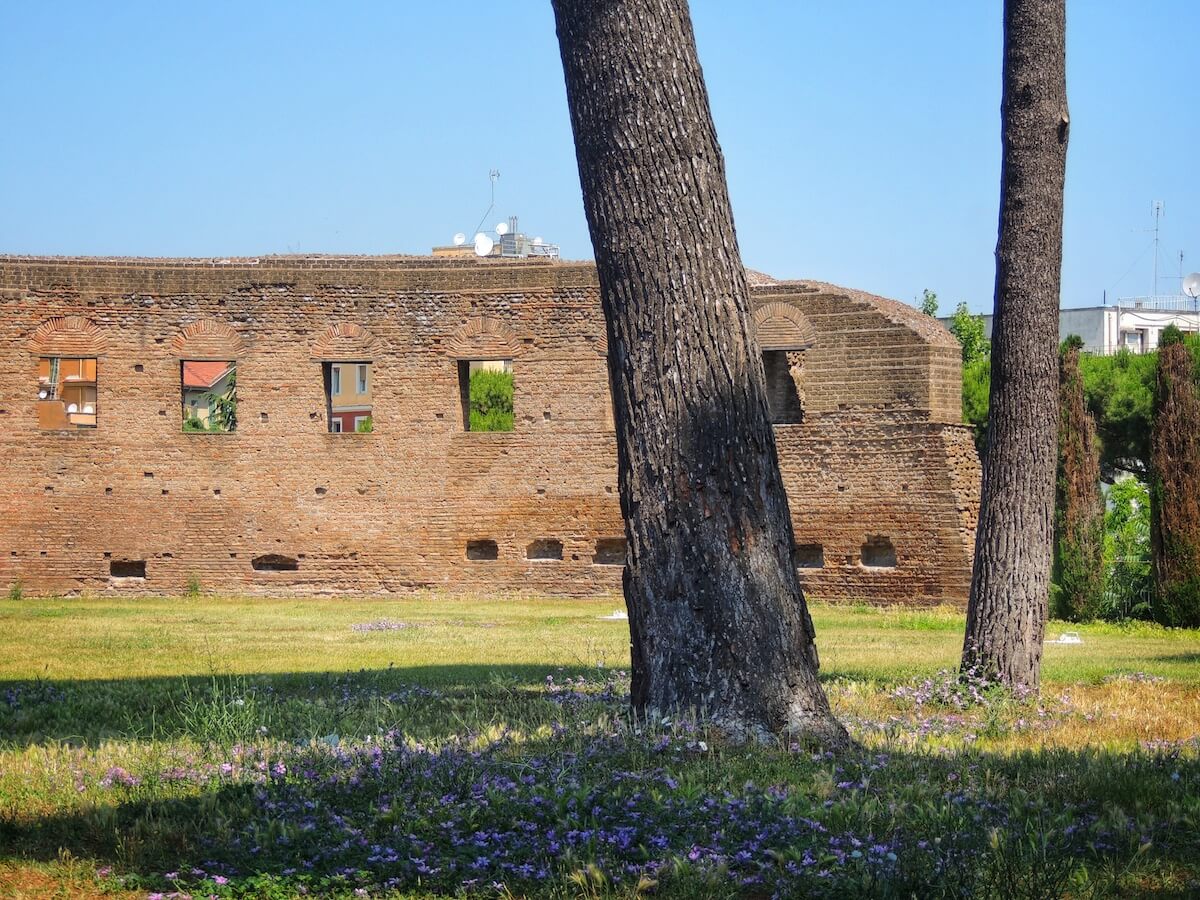 In fact, the circular mausoleum originally formed part of a larger funerary complex that included a cemetery basilica and a baptistry, built around the year 326 AD to commemorate Constantina’s recovery from a childhood illness. The basilica, of which only imposing ruins in the green space adjacent to the mausoleum remain, was dedicated to local virgin-martyr saint Agnes, whose intercession reportedly brought on Constantina’s miraculous recovery. 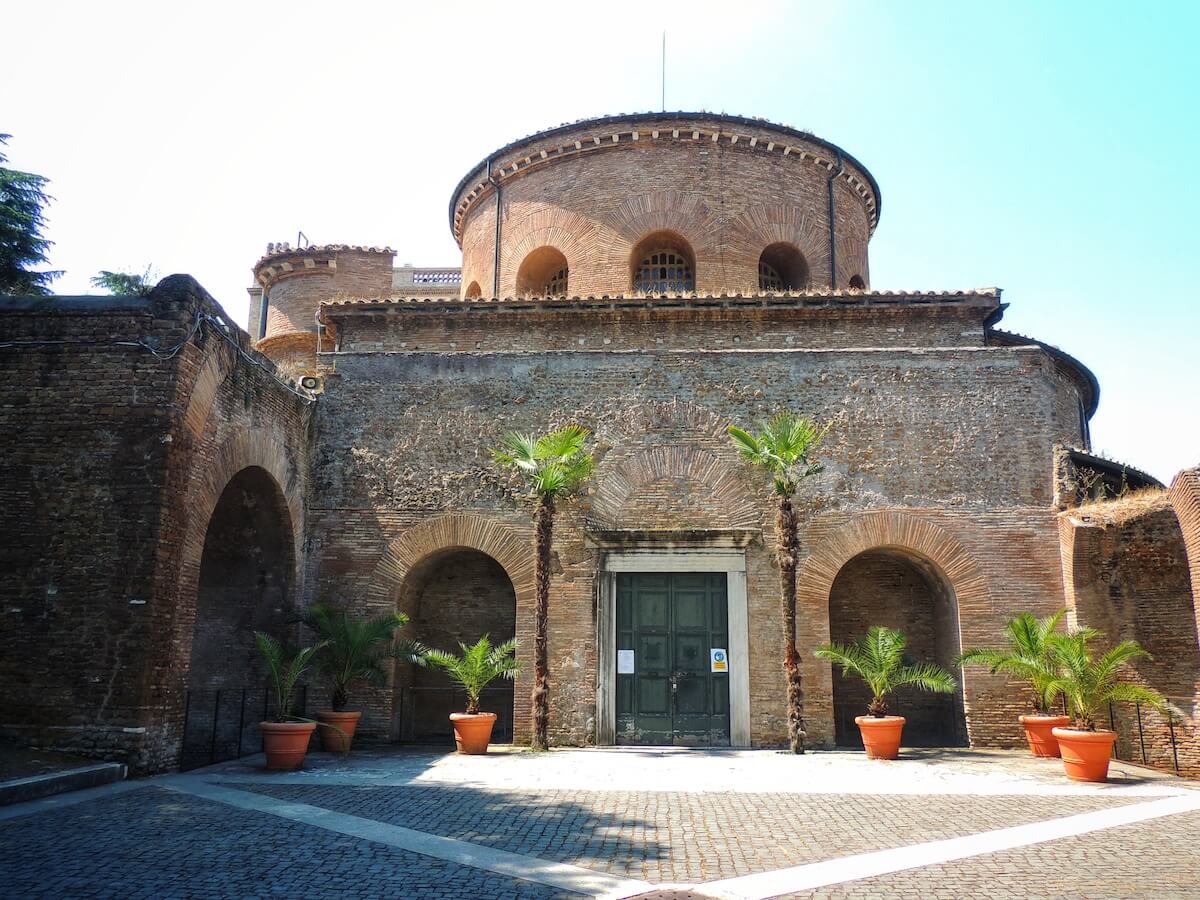 The traditional position that the circular mausoleum, once attached to the larger basilica, was designed as the final resting place for Constantine’s daughter Constantina has recently been revised - many scholars now generally consider the site to have been intended to house the mortal remains of her sister Helena (wife of Julian the Apostate) instead in the 360s, with Constantina originally buried in an earlier, smaller structure on the same site.

In any case, for centuries two massive purple porphyry sarcophagi graced the interior of the basilica, demonstrating that eventually both sisters were buried here alongside each other. Today you can admire these sarcophagi, fabulously decorated with garlands of vines and putti crushing grapes, in the Vatican Museums and St. Peter’s basilica respectively, whilst replicas have been installed in the mausoleum. 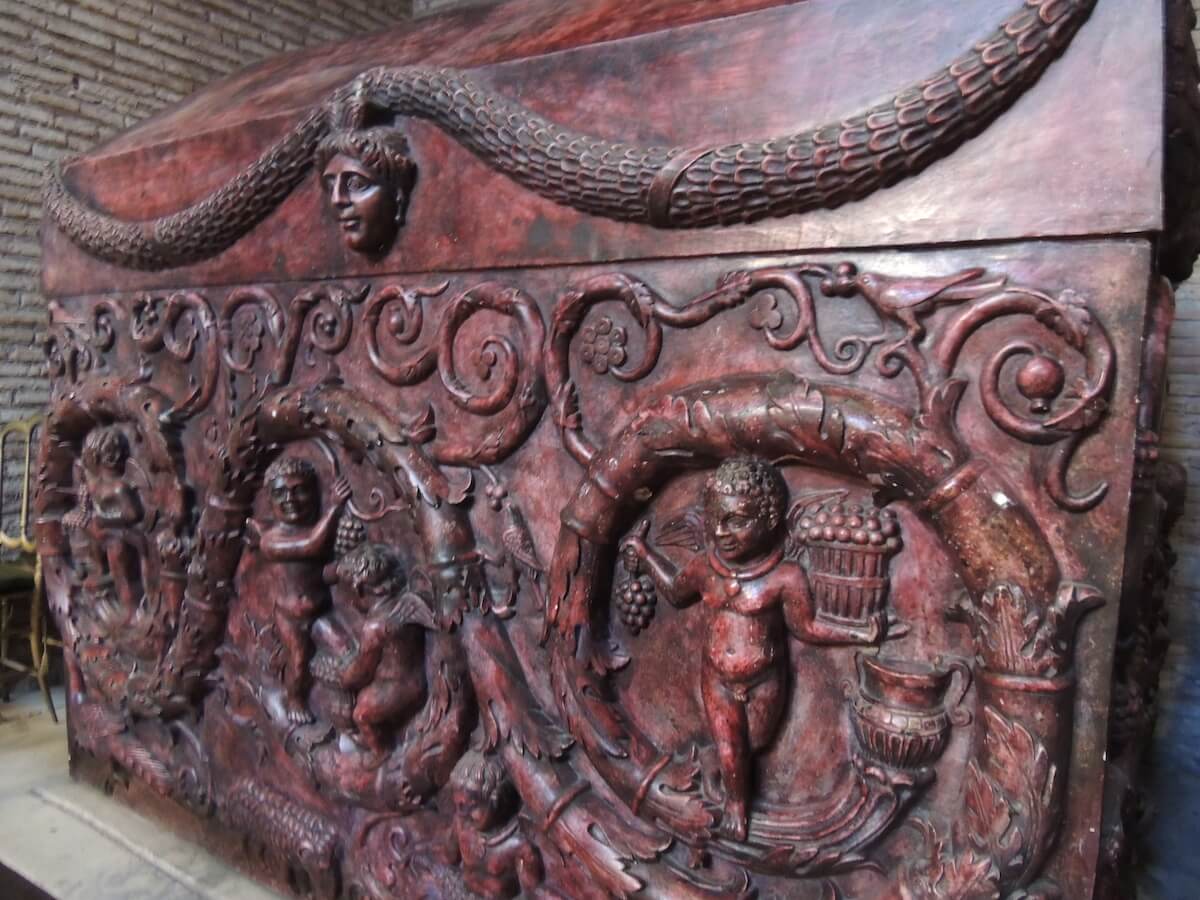 The imperial mausoleum was one of those few buildings that managed to survive the fall of the Roman Empire completely unscathed. At some point during the Middle Ages a legend arose which characterised Constantina as the mythical saint Costanza, apparently a daughter of Costantina. Masses were said in the mausoleum as early as the 9th century, and the building was officially converted into a church dedicated to the apocryphal Costanza in the 13th century by Pope Alexander IV - ensuring its survival in the centuries to come. 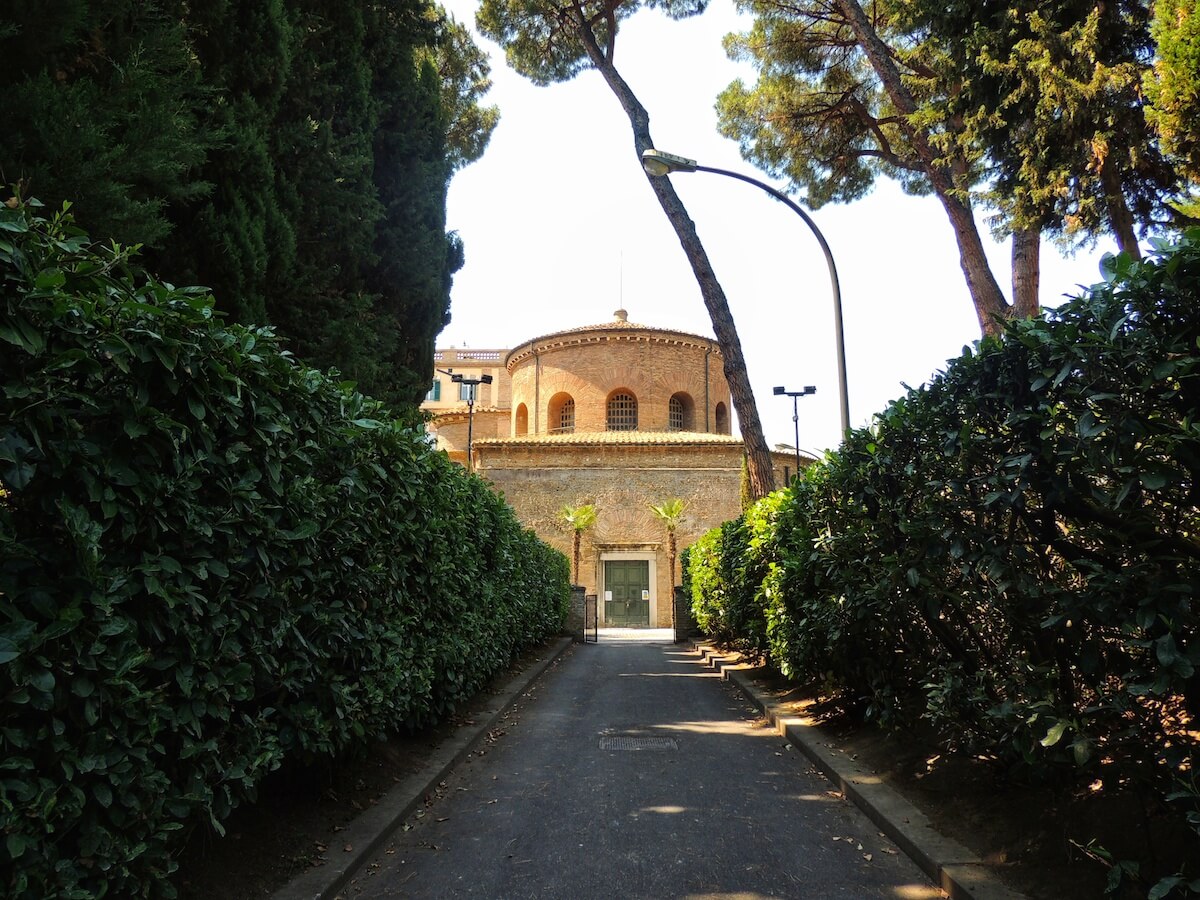 Whatever the exact origins of the Mausoleum, its architecture marks it out as one of the most important buildings of late antiquity. Access to Santa Costanza is via a long avenue flanked by pines on either side leading from the nearby basilica of Sant’Agnese fuori le Mura. The brick mausoleum is one of the earliest examples of a circular Christian building: within, a large central space is surrounded by a circular corridor known as an ambulatory, whilst a dome 19.5 metres high and 22.5 metres in diameter spans the space above. 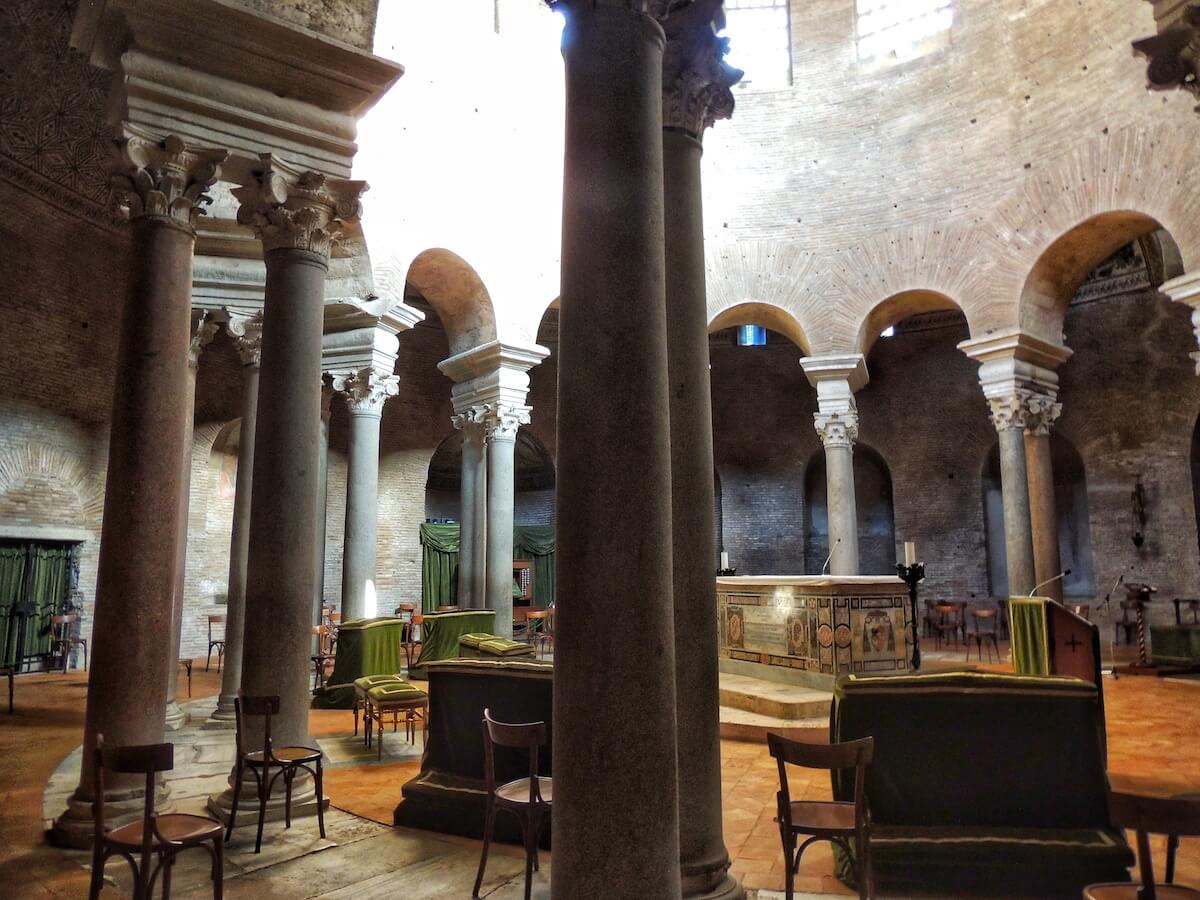 12 pairs of ancient granite columns recycled from an earlier Roman structure separate the ambulatory from the central area, whilst 12 beautiful mullioned windows flood the mausoleum with light from above. At the centre of the mausoleum stands a Baroque altar. 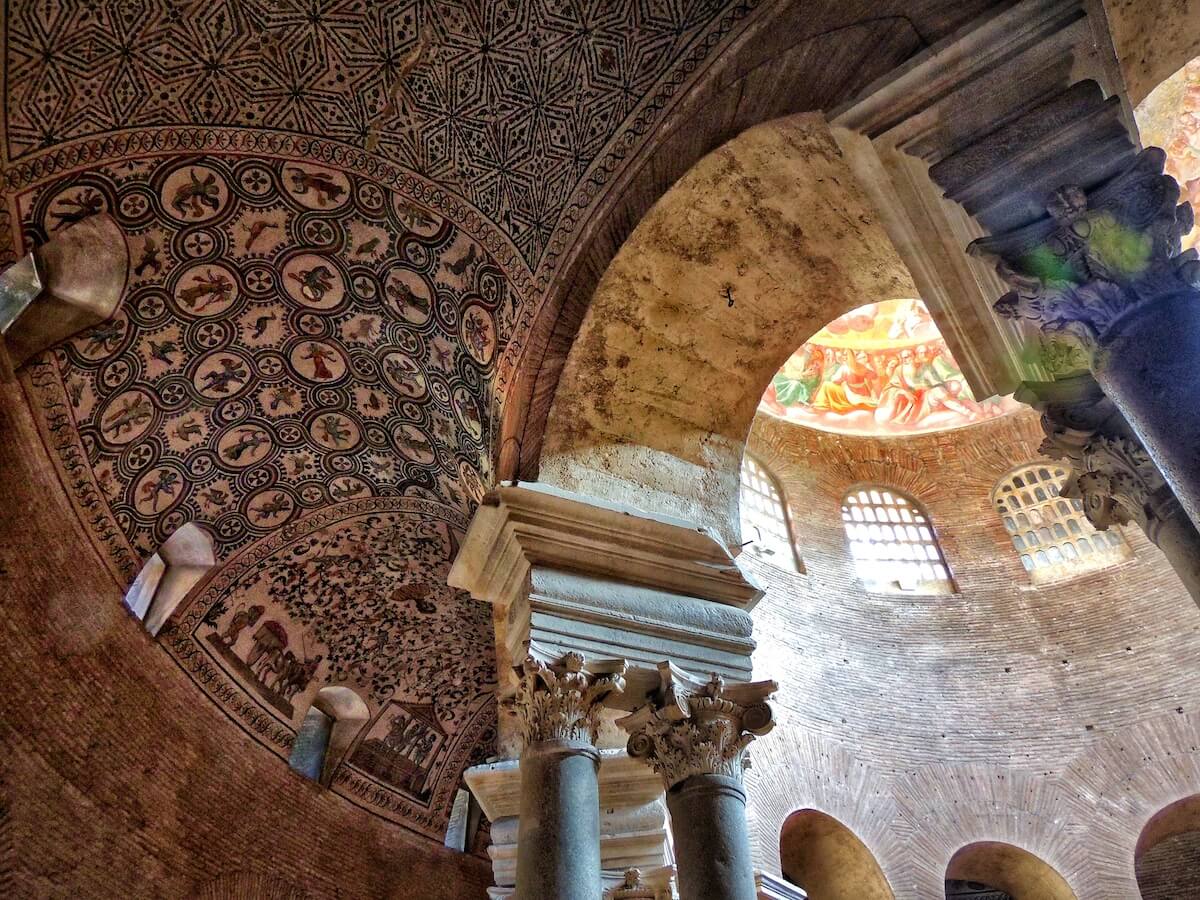 But it’s Santa Costanza’s extraordinary mosaics that really make the ancient mausoleum-turned-church an unmissable stop for art lovers. The stunning artworks that decorate the vaults of the ambulatory are amongst the oldest surviving Christian mosaics in Rome, dating from the original construction in the 4th century.

Simple geometric patterns give way to designs featuring dolphins and marine life, creeping vines and cavorting putti. An array of fruits and flowers, various birds and peacocks - symbolic of rebirth and resurrection - decorate the vault, as well as two fascinating scenes depicting winemaking. In one, the newly harvested grapes are being trod in a winepress, whilst in the next the wine is being carted off to Rome by a pair of oxen being whipped into action. 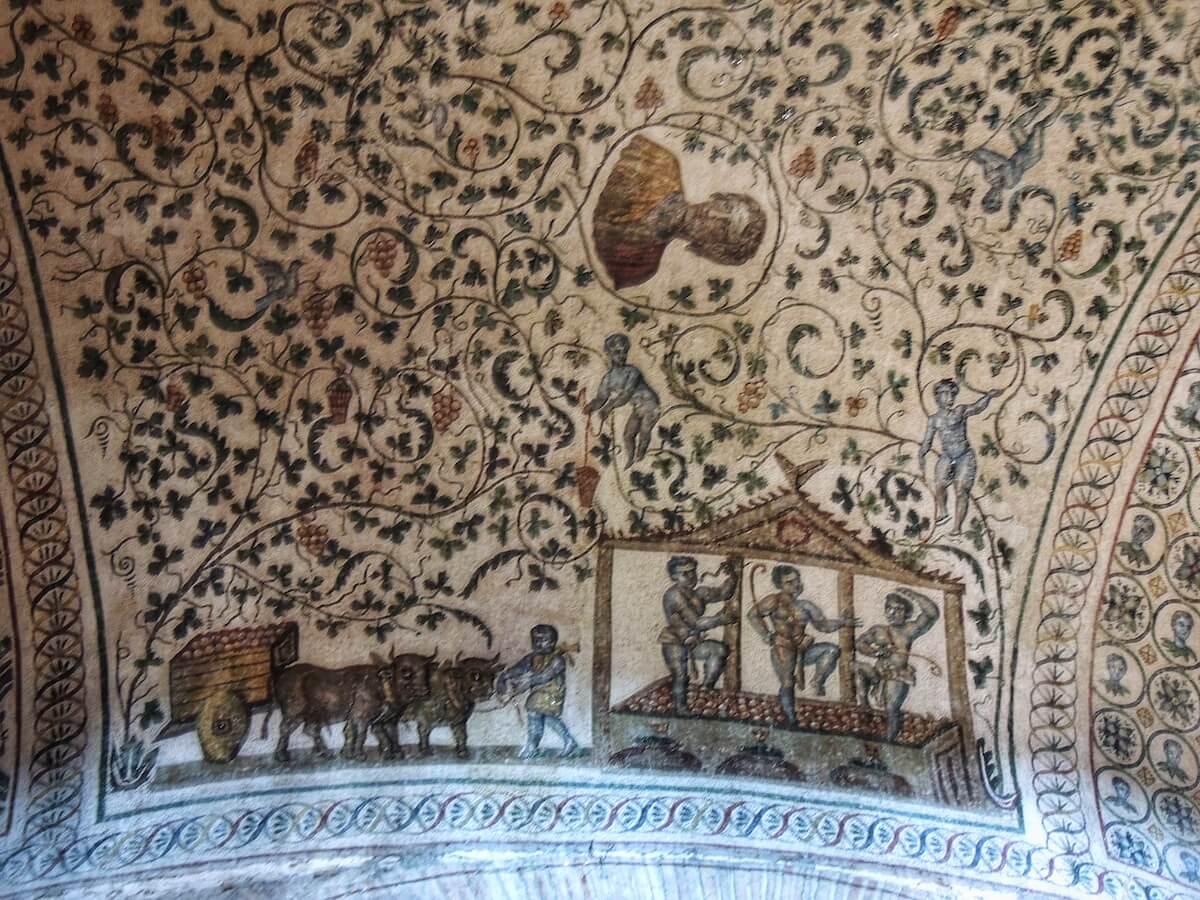 Once again, the multiple significations of the decorations are readily apparent: on the one hand these are classic ancient themes relating to Bacchus, the god of wine, but seen through a Christian lens they instead seem to foreshadow Christ’s martyrdom and the Eucharistic wine drunk during the Mass. Mosaic portraits of two figures complete the vault decorations, perhaps depicting Constantina and Helena, or alternatively Helena and the Emperor Julian. 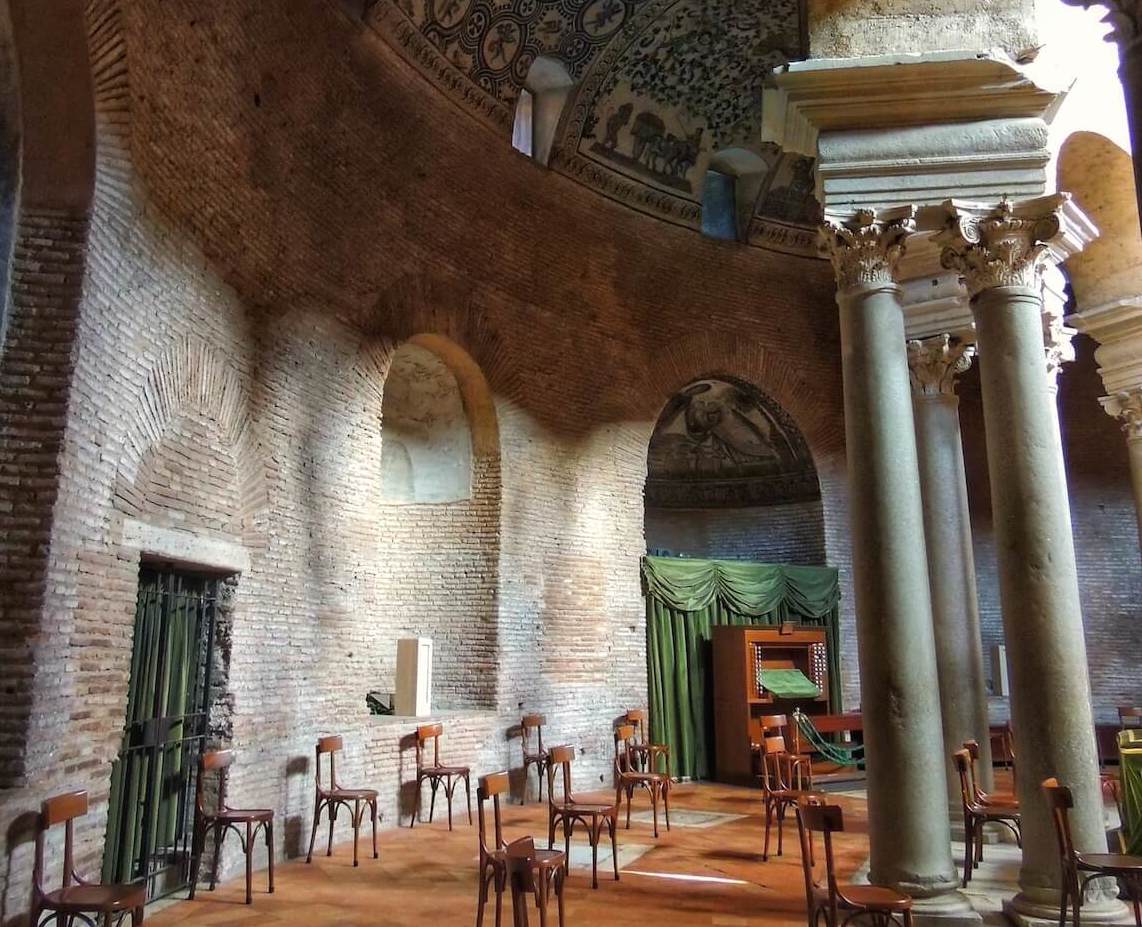 Eleven niches are set into the wall of the ambulatory, and these too were originally decorated with opulent mosaics, dating from the 5th-7th century AD. Only two of these still exist: in the south niche Christ is seated on a globe in his role of Pantocrator, consigning the keys of heaven to St. Peter in the so-called Traditio Clavium. The north niche meanwhile sees Christ dressed in elegant purple and gold robes handing Peter a scroll representing his right to rule earthly affairs in the name of God, the so-called Traditio Legis. 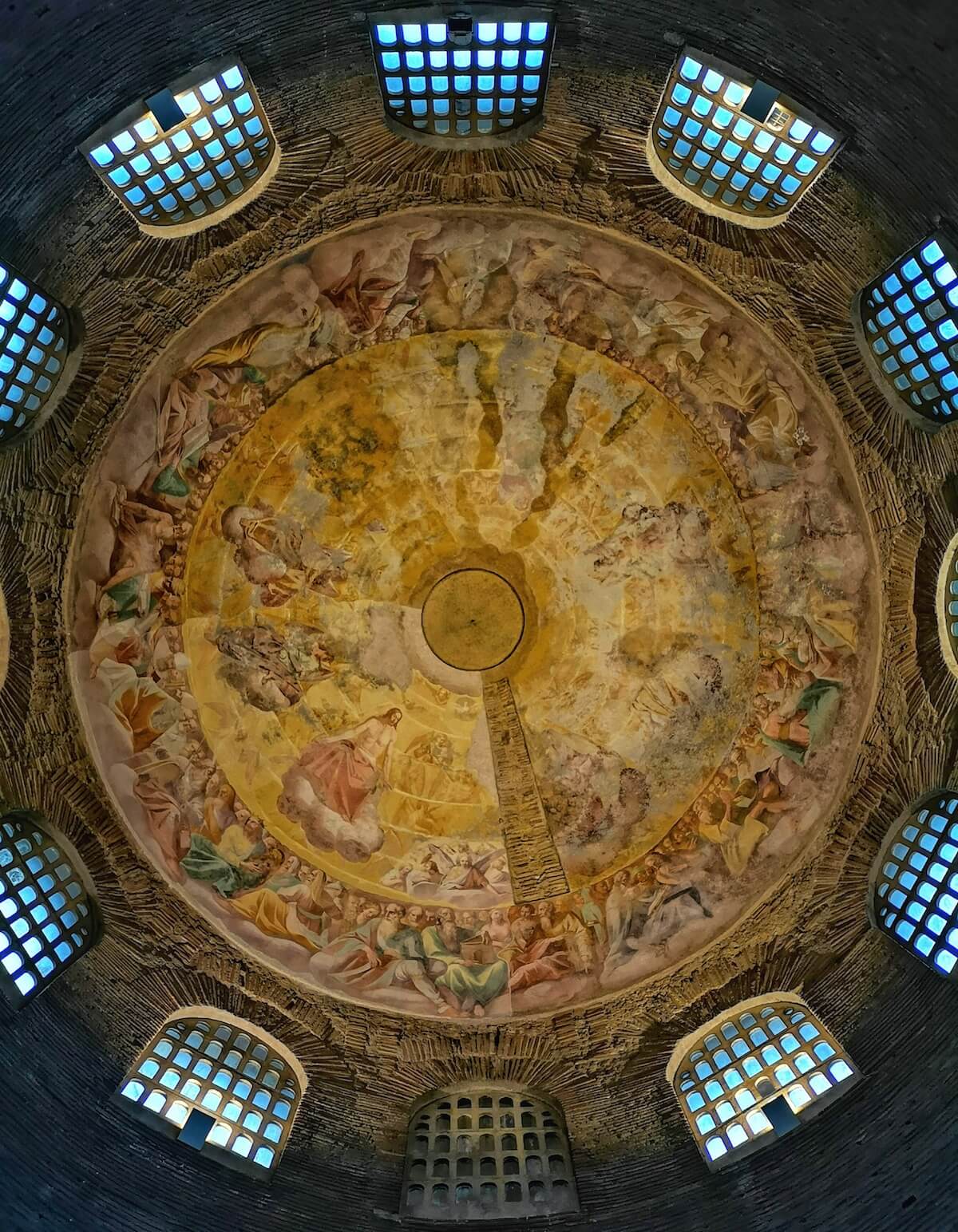 Equally magnificent mosaics once adorned the central space, but by the 17th century they had become badly damaged and were falling off. The mosaics were entirely replaced with rather anonymous frescoes depicting the life of Saints Constance, Agnes and Emerentiana.

Luckily for us, Francisco de Holanda produced a series of watercolours depicting the original mosaics in the middle of the 16th century, giving some idea of their lost splendour. Two rows of scenes drawn from the Bible, one from the Old Testament and one from the New Testament, once graced the vault, divided by caryatids and scrolls. Beneath these religious scenes a seascape depicting marine animals of all kinds and putti fishing continued the synthesis of pagan and Christian subject matter typical of Santa Costanza.

Birds of a Feather Flock Together: The Drunken Antics of the Bentvueghels 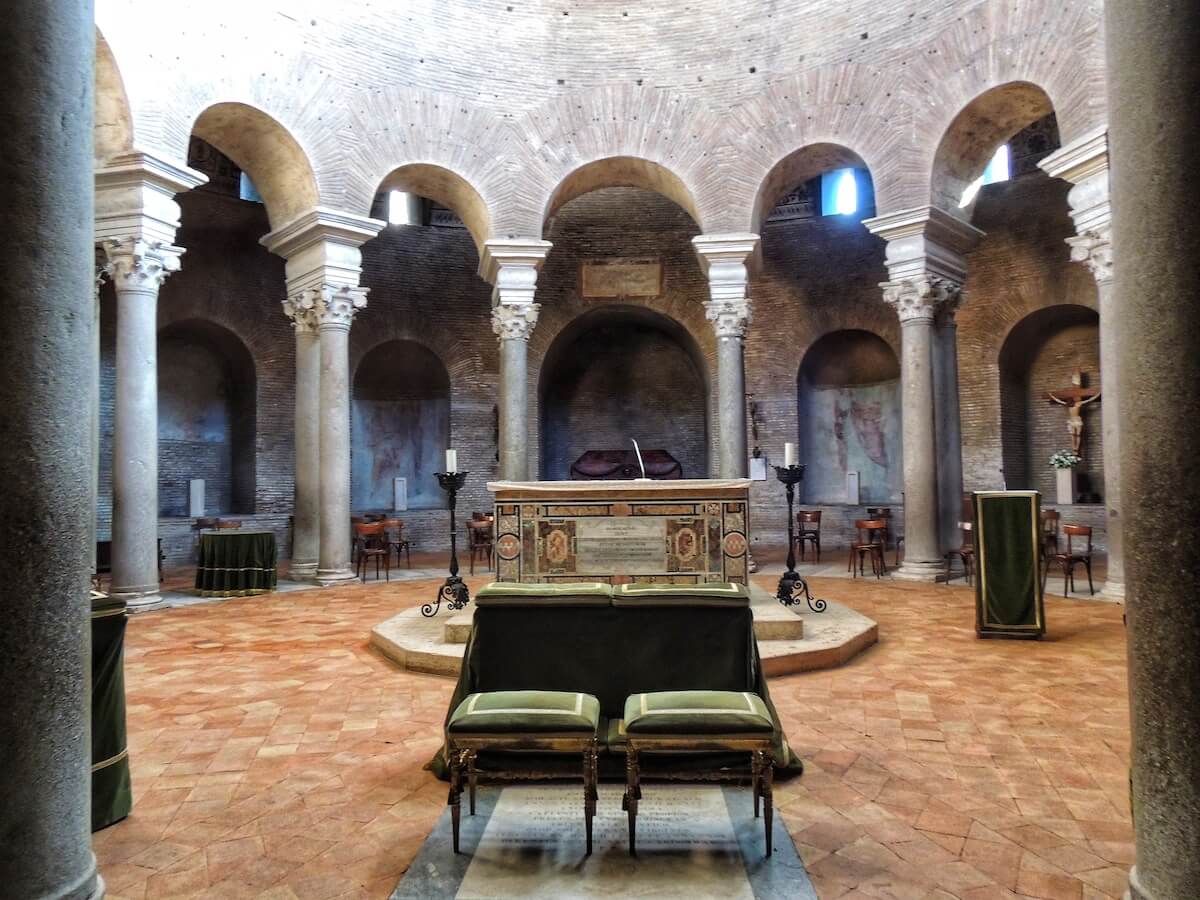 For centuries it was widely believed that the Mausoleum was an adapted pagan temple dedicated to Bacchus thanks to the wine-making themes that appear in the mosaics and on the sarcophagi. This traditional, if erroneous, association gave rise to a bizarre custom in the 17th century when a group of rowdy Dutch artists living in Rome known as the Bentvueghels (literally Birds of a Feather) adopted the ancient mausoleum as the location for their initiation rites.

The festivities  would often last for a day straight, and concluded with toasting the admission of a new member with a libation in front of the massive porphyry sarcophagus they believed to hold the earthly remains of the bacchanalian god. Pope Clement XI outlawed the tradition in 1720, but a graffitied list of the names of the drunken Dutch painters survives on a wall of the mausoleum.

These days Santa Costanza is a much quieter place, seemingly lost to time in the leafy eastern suburbs of Rome. Tourists rarely venture here, making it one of the great hidden gems of early-Christian art in the city. Make sure to pay a visit next time you come to Rome! If you would like to learn more about Santa Costanza in the context of Constantine's Rome, then be sure to check out our Early Christian Rome virtual tour!