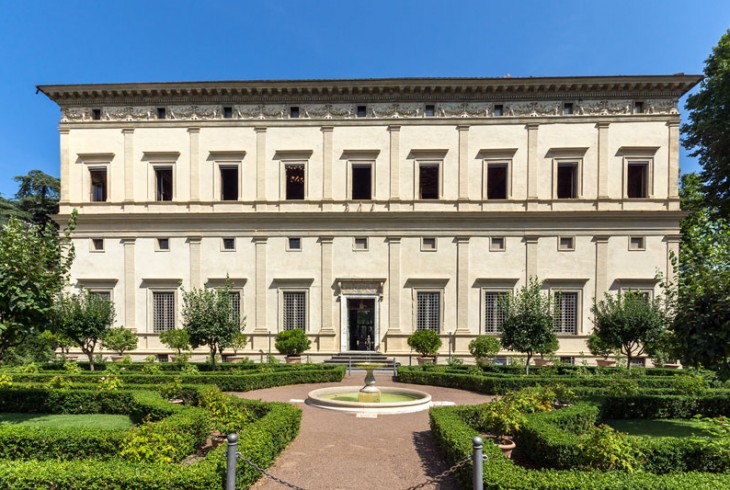 Want to see the artistic masterpieces of Rome’s High Renaissance, but don’t fancy joining the crowds thronging the Sistine Chapel and the Raphael Rooms in the Vatican Museums? When in Rome make sure to visit the fabulous but surprisingly little-visited Villa Farnesina in Trastevere, where you can admire frescoes by Raphael and his contemporaries every bit as impressive as the 16th-century masterpieces that adorn the nearby Vatican palaces.

The Magnificent Life of the Pope’s Personal Banker

What happens when the vast wealth of the Pope’s personal banker joins forces with the talents of some of the greatest artists of the Italian Renaissance - amongst them Raphael, a man thought by contemporaries to have been sent from heaven by God himself to beautify the world?

The spectacular answer is the Villa Farnesina, a sumptuous pleasure palace built on the banks of the river Tiber for the fabulously wealthy Agostino Chigi, financier to the popes, at the start of the 16th century. Blessed with a limitless supply of ready cash and an abundance of good taste, Chigi spared no expense in realising his vision of a relaxing country retreat on the very doorstep of the city, a ‘suburban villa’ from where he could effectively run his business empire and throw lavish parties that epitomised the bella figura of a golden age.

Get the full story behind the Villa and its marvellous artworks with our VILLA FARNESINA TOUR.

Chigi came from a long line of Sienese bankers, and enriched the family fortune by lending massive sums of money to Europe’s popes and powerful princes, including both the Borgias and the Medicis. His star rose to its highest when Julius II (patron of both Michelangelo and Raphael) ascended to the Papal throne.

In return for offering Julius much-needed financial backing, Chigi was appointed treasurer to the Vatican and forged a close personal relationship with the Pope himself, the two men joined by a shared love of art, antiquity, learning – and wealth. Chigi was on the fast-track to becoming Europe’s richest man, employing 20,000 people and a hundred ships around the globe.

Agostino’s private life matched his luxury-loving public persona, and a whirlwind romance with Imperia, the city’s most renowned courtesan who counted cardinals and bishops amongst her always-satisfied clientele, was merely his most famous feat of amor. After her death (rumoured to be suicide) in 1511 Chigi quickly struck up a relationship with Francesca Ordeaschi, a young Venetian woman from a humble background with whom he scandalously cohabited unmarried until the year before his death. In 1519 he finally made their relationship official with an extravagant wedding ceremony presided over by the decadent Medici Pope Leo X, and celebrated with a sumptuous banquet at the Villa. 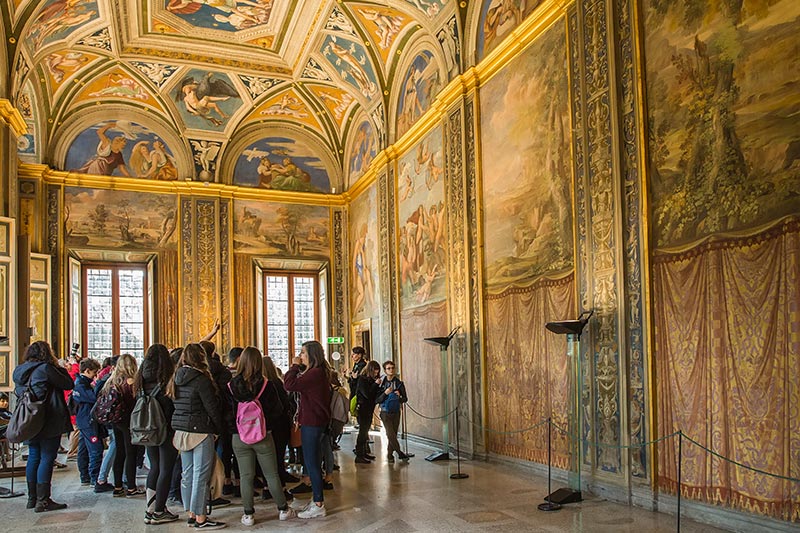 The regular parties thrown in the halls and gardens of Chigi’s riverside villa were highlights of the early 16th-century social calendar, attended by the most renowned writers, princes and ecclesiastics of the Roman Renaissance. Amidst poetry readings and theatrical performances, Chigi dispensed legendary acts of largesse – during a particularly notorious banquet thrown to celebrate the baptism of his son Lorenzo in 1518, the banker demonstrated his contempt for the material world and the irrelevancy of petty affairs of money by ordering his servants to collect the priceless silverware and gold used by his guests after each course and fling them into the Tiber’s murky depths.

But Chigi didn’t become one of the world’s richest men by literally throwing money away - apparently the cagey banker had installed strategically placed nets just beneath the water’s surface in order to retrieve the precious crockery after his drunken guests had disappeared into the Roman night.

Only the finest artists of the age were entrusted with the task of realising Chigi’s unique vision for his river-side retreat. The Sienese architect and painter Baldassare Peruzzi came up with an innovative plan for the villa - instead of the typical Renaissance palaces that resembled blocky fortified castles looming over narrow city streets, Peruzzi designed an airy U-shaped building surrounded by leafy gardens and linked by a serene open-air loggia. In addition to Peruzzi, Chigi called upon the services of Raphael, Giuliano Romano, Sebastiano del Piombo and Il Sodoma, and the villa’s every wall is covered in priceless works of High Renaissance art. 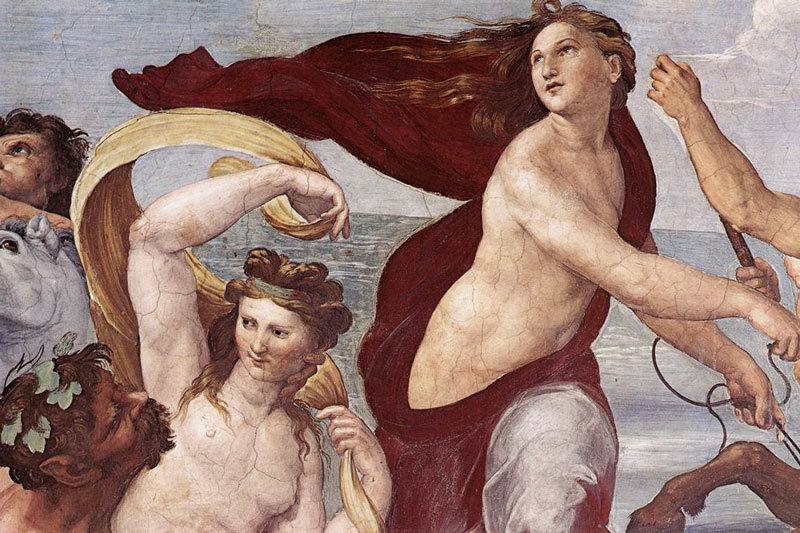 As soon as you enter the charming Villa you are ushered into the Loggia of Galatea, named after the palace’s most famous painting – a riotous fresco by Raphael himself depicting the sea-nymph Galatea skimming across the waves in a shell pulled by dolphins and surrounded by cavorting sea-creatures blowing conches to herald her voyage.

In an adjacent fresco the one-eyed Cyclops Polyphemus turns away in despair – Polyphemus was madly in love with the beautiful Galatea, and composed a rustic paean to his undying passion for her on his panpipes. The refined and flighty Galatea was amused by his clumsy courting, and sped away from her admirer with her watery retinue. The story has a dark end: the jilted Cyclops murdered Galatea’s lover, and in her grief the nymph transformed his blood into the river Acis in Sicily. According to legend, Galatea’s face bears the features of none other than Imperia, the ill-fated courtesan who poisoned herself after losing the affections of Chigi.

Constellations, the Zodiac and a Renaissance Horoscope

It can be hard to tear yourself away from Raphael’s masterpiece, but before moving on make sure to look up, and the heavens will open before your eyes. All across the ceiling Peruzzi painted an elaborate horoscope for Chigi, who was an enthusiastic follower of celestial portents, depicting the constellations as they were on the night of his birth. The patron had even insisted on delaying starting work on the palace until the stars aligned favourably, only laying the foundation stone on April 22nd 1506, the anniversary of the legendary founding of Rome itself. Unsurprisingly, Chigi’s horoscope, planned with absolute precision by the humanist astrologer Cornelio Benigni, foretells only great things for the worldly banker, predicting a life of easy charm, good taste and luxury. Personifications of constellations and the zodiac combine in a stunning and complex symbolic display that reasserted the magnificence of the worldly banker for those who knew how to decipher it.

Don’t miss the beautiful but seemingly out of place black-and-white portrait head in one of the lunettes on the far wall, long-rumoured to be a brilliant prank pulled on Raphael by his great rival Michelangelo when he snuck in to see how the work was progressing (scholars now attribute the work to Peruzzi).

Divine Love and Envy in the Loggia of Cupid and Psyche 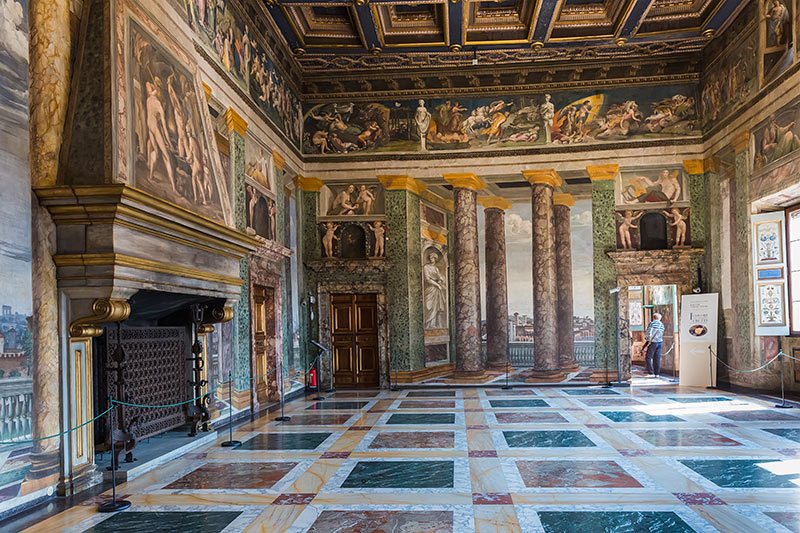 In 1517 Raphael returned to the Villa to decorate the airy entrance loggia, at the time open to the outside world, as an extension of the surrounding leafy gardens. Love was in the air – Chigi was finally preparing to marry his mistress Francesca, and wanted decorations to reflect the prevailing mood of nuptial celebration. And so Raphael and his greatest pupils Giulio Romano,  Giovan Francesco Penni and Giovanni da Udine came up with an elaborate fresco cycle depicting Lucius Apuleius’ ancient tale of Cupid and Psyche, the star-crossed lovers, one mortal and one divine, whose travails in pursuit of love ultimately lead to their being welcomed into the ranks of the Gods in the celestial sphere.

The story goes that Venus, goddess of love, was jealous of the human princess Psyche, whose worldly beauty was such that it was upstaging her own. She commanded her son Cupid to ensure that Psyche falls in love with a hideous man, but Cupid is predictably smitten with her himself. Furious, Venus then proceeds to persecute Psyche all along the walls of the loggia, tasking her with impossible trials as the beautiful gods cavort naked amongst festoons of flowers and some extremely suggestive fruits. The tale finally reaches a happy resolution in the two massive scenes on the ceiling – in one the gods convene a council where Jupiter takes pity on Cupid and orders Venus to cease her persecution of Psyche, whilst on the left the two lovers are finally wed in a magnificent banquet that obviously foreshadowed the upcoming wedding feast of Chigi and Francesca.

Renaissance Illusionism and the Marriage of Alexander the Great

The splendid decorations continue upstairs, where in the appropriately named Room of the Perspective Views Peruzzi created a wonderful illusionistic decoration that appears to dissolve the walls of the room and create a fictional colonnade that leads on to peaceful country landscapes through a clever trick of perspective known as trompe-l’oeil. It was here that Chigi and Francesca actually celebrated their lavish wedding banquet in 1519. Look out too for the 16th-century graffiti carved into the walls of this room that recall the horrors of the brutal Sack of Rome in 1527.

Equally impressive is the couple’s bedchamber next door, frescoed with a massive depiction of the wedding night of Alexander the Great and his new bride Roxanne by the artist known as Il Sodoma. Roxanne is largely naked as she sits on a four-poster bed, whilst the all-powerful ancient emperor, still clad in his warrior’s armour, hurries from the world of war to the world of love. As the couple lounged in their own bed, the proud example of one of antiquity’s greatest couples caught in a moment of intimacy surrounded by cheeky putti egging them on no doubt legitimised their own conjugal love.

The spectacular decoration of the Villa Farnesina, full of love, sensuality and the caprices of the ancient gods, is one of the great examples of secular Renaissance art, a far cry from the pious works of religion emblazoned on church walls and ceilings all across the city. Chigi and Raphael teamed up twice more to create two other Renaissance masterpieces in Rome which you can still visit today – the banker’s funerary chapel in the church of Santa Maria del Popolo (where Bernini finished the decorations over a century later), and the marvellous frescoes of sibyls that adorn the Chigi chapel in Santa Maria della Pace near Piazza Navona. Visit them all and tread a far less well-known path through the splendours of the Roman Renaissance.

Visit this jewel of the Roman Renaissance located in the heart of Trastevere at Via della Lungara 230 from Monday to Saturday, 9am to 2pm. Tickets cost €6. Or get in touch to book a Villa Farnesina tour with Through Eternity today!