Where the Fountains Flow with Wine: Marino’s Incredible Sagra dell’Uva 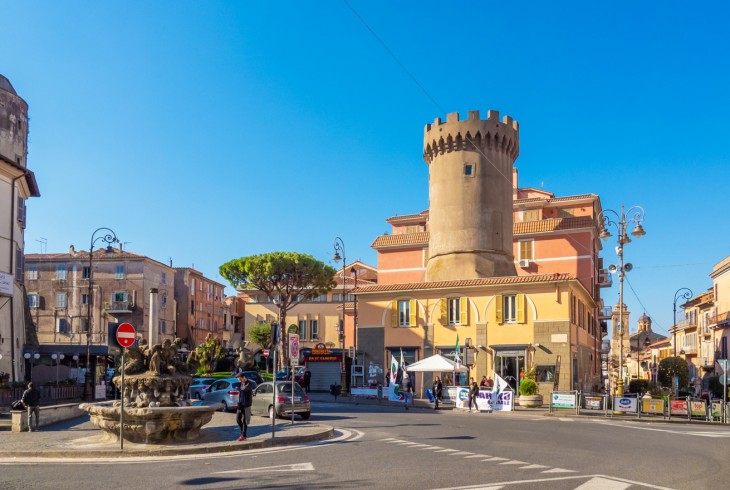 From the 4th to the 7th of October this year (that’s this weekend!) the picturesque town of Marino, nestled in the hills of the Castelli Romani 20 miles south of Rome, celebrates the 95th edition of its famous Festival of the Grape.

Towns and villages the length and breadth of the Italian peninsula celebrate local festivals each year, an excuse for communities to get together to eat, drink and chew the fat. From the opulent festival of Saint Agatha in Catania, where the object of the celebrants’ attention are sweet buns shaped to represent the breasts of their patron saint (a bizarre homage to Agatha’s brutal martyrdom) to Ivrea’s battle of the oranges and Alba’s white truffle fair, food and drink in all its weird and wonderful variety is almost always at centre stage. But few can match Marino’s annual wine festival for sheer bacchanalian fervour.

Marino is at the heart of the wine-producing region of the Castelli Romani, which since ancient Roman times has provided the Eternal City with copious quantities of Bacchus’ nectar. In Marino, wine really is the only game in town – so important is viniculture to the local economy that over the centuries a miraculous 12th century effigy of the Virgin Mary housed in the town’s cathedral has frequently been called upon to ensure a decent grape harvest.

Each year, the first week of October sees the town’s historic centre transformed into a great open-air wine cellar showcasing the local varietal. Statues and fountains are festooned with great swaying bunches of grapes hanging from their mouths, shoulders and limbs, whilst vines are strewn across the narrow cobbled streets. Best of all, for a glorious half hour at the height of the festivities, the town’s fountains run free not with water, but with wine. Tens of thousands of revellers throng the streets to partake in the miracle – enough to make a believer out of even the most sceptical after the fourth glass.

Origins of the Marino Wine Festival

Although Marino’s modern Sagra dell’Uva was first staged in 1925, the festival owes its existence to a far more distant moment in the town’s history. In October 1571, the largest naval battle since antiquity raged in the Ionian sea’s Gulf of Patras, when a coalition of the major naval fleets of Catholic Europe allied together in an attempt to repel the advance of the Ottoman Empire into the Mediterranean. The commander of the Papal ships and hero of the hour was  a young aristocrat by the name of Marcantonio Colonna, scion of one of Lazio’s most powerful families. The symbolic turning point of the battle came when Colonna successfully captured the flagship of the Turkish fleet commanded by Ali Pasha – the defeated admiral was slain aboard his galley, and his decapitated head was gruesomely hoisted high onto a pike above the battle.

Colonna also happened to enjoy the title of Lord of Marino, and the townsfolk (including his wife, Felice Corsini, and their children) awaited news of the battle on tenterhooks. Word finally came through of the local boy’s glorious role in the victory, and Marcantonio hotfooted it back to Marino where he arrived to a hero’s welcome.

Pope Pius V wasted no time in establishing a religious festival of thanksgiving in on the back of the Lepanto triumph, dedicated to the Madonna of the Rosary under whose banner the Christian troops fought. Pius ordered the feast to be celebrated every year on the 7th of October – the day on which the Papal fleets triumphed at Lepanto, and the festivities in Marino were as much a celebration of the feats of the victorious admiral as they were a religious obligation.

So much for Marino’s most famous son; but where does the wine come in? For that, we need to fast forward around 350 years: in 1925, the writer Leone Ciprelli, well-known for his plays and poems in Roman dialect, decided to honour the town of his birth by revitalising the annual religious festival and combining it with a celebration of Marino’s most important  product. Inspired by the exploits of the town’s most important patron 350 years earlier, Ciprelli explicitly dedicated the updated festival to the memory of Colonna, creating a celebration equal parts sacred and profane in the process. The Sagra was an immediate hit from the beginning, and has been going ever since.

The Miracle of the Wine-Giving Fountains

The real highlight of the festivities takes place on Sunday evening when, in a ‘miracle’ as delicious as it is sacrilegious, the fountains of Marino’s centro storico will spew forth wine instead of water for one glorious half hour between 5.30 and 6.00 PM. The miracle has formed a central part of the festival since the beginning, when Leone Ciprelli was inspired by legendary tales of the luxurious parties that the Colonna held in their palace, in which statues and fountains would gush with wine to the delight of the family’s guests.

Providing a more decorous framing for the event, the miraculous transformation is officially down to the good offices of the Madonna of the Holy Rosary, whose feast day is celebrated on the same day with a procession of her statue through the streets of the town. Generously, the Virgin shows her gratitude to the devotion of the townspeople by dousing them with free wine. The miracle took on new dimensions in 2008, when a technical error meant that the wine destined for the fountain had been accidentally directed into pipes leading to the kitchen taps of nearby apartments – delighted residents were convinced that this really was a miracle as they merrily stocked up on the free-flowing hooch, although local priests quickly poured cold water on the idea.

Although a number of the town’s fountains take part in the miracolo delle fontane che danno vino, the centrepiece is the grand Fontana dei Quattro Mori – the Fountain of the Four Moors  - erected in the town back in the 17th century to celebrate (you guessed it) the defeat of the Turks at Lepanto. If you find the crowds here too thick to penetrate, then try your luck at the Fontana del Tritone in nearby piazza San Barnaba or the Fontanile Comunale on via Castrimeniense.

Understandably given the fact that thousands of litres of it are being given away for free, the wine emanating from Marino’s fountains is fairly rough and ready. But if your tastes run more towards finer vintages, fear not. Marino’s entire centro storico will be given over to wine tastings and meetings with some of the region’s most renowned producers for the duration of the festival, so you can get a real taste of what the wines of the Castelli are all about. There’ll be plenty of  stands offering local meats, cheeses and breads to keep you going as you chart your oenological course through the streets and squares as well. Make sure to grab yourself a panino con porchetta – this delectable spit-roasted pork is a Castelli specialty.

The Historic Procession of Marcantonio Colonna

Although wine is the star of the show, the Sagra dell’Uva also boasts no shortage of pageantry and spectacle. The highlight is a fabulous parade on Sunday afternoon that recreates the return of Marcantonio Colonna and his troops from the Lepanto campaign. One of the oldest parades in period costume in Italy, the recreation was first staged in 1929 and features elaborate allegorical floats, historical music and 400 participants in Renaissance costumes specially crafted for the occasion. The procession unfolds in two parts: from one end of the town Colonna (usually impersonated by a well-known actor) and his troops march along Corso Vittoria Colonna, whilst a second group featuring the duke’s wife, children and retinue head out from Palazzo Colonna to meet them. The two groups meet in the middle at piazza Giacomo Matteotti in front of the Fontana dei Quattro Mori – just in time for the its star turn in the miracolo.

Marino’s Sagra dell’Uva is one of Italy’s best-loved and most enjoyable town festivals - if you’re going to be in Rome this weekend, then make sure to free up your schedule for a trip into the hills!

How to Get to Marino

Marino is just a 35 minute train ride from Rome’s Termini station. From the station it’s about a 10 minute schlep up the hill to the centre of town. The name of the station is Marino Laziale – check Trenitalia’s website for times.

10.30: Solemn Procession of the Statue of the Madonna dell SS. Rosario

15.30 The Return of Marcantonio Colonna from Lepanto

17.30 The Miracle of the Wine-Giving Fountains

18.30 Parade of the Allegorical Floats