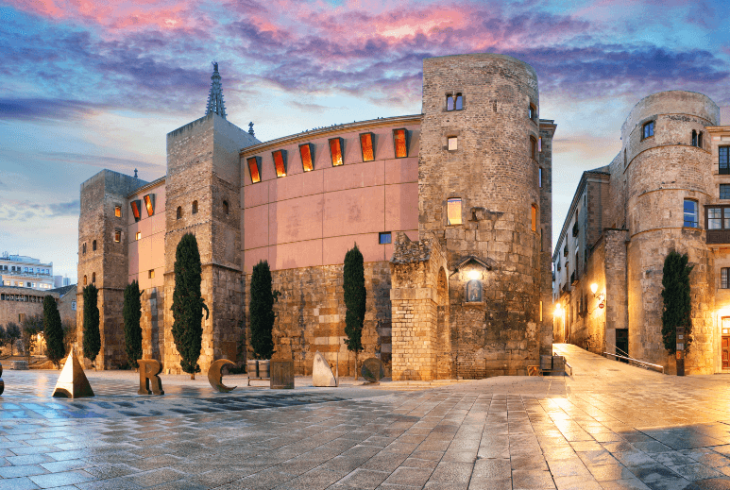 Did you know that the story of Barcelona extends all the way back to the era of ancient Rome? Although the area has been inhabited since prehistoric times, the first major settlement was founded by the Romans between 15 and 13 BC as an extension of their existing forays into modern day Catalonia at Tarragona and  Empúries.

The new colony, whose full name was Julia Augusta Faventia Paterna Barcino, was founded atop Mont Tabor, a rather modest hill looking out over the sea to one side and the plains to the other. The colony was successful, and ancient Barcino quickly grew to become an important city in the Empire. 2,000 years later and the city still preserves a number of monuments and artefacts that offer up a rich insight into this ancient history, and exploring them is a must on any visit to Barcelona. Read on for our guide to the most important sites of ancient Barcino! 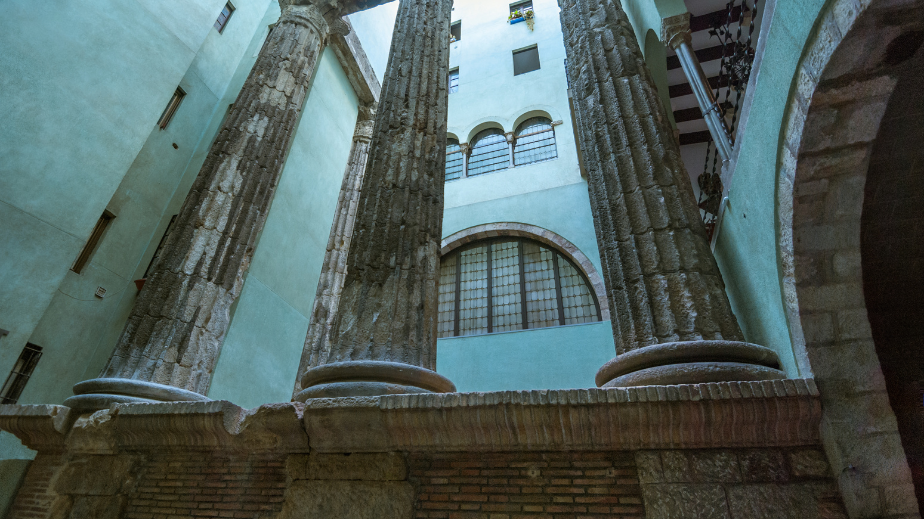 The most striking antique site to survive from ancient Barcino must be this impressive 1st-century-AD temple dedicated to the emperor Augustus. Hidden away in an internal  courtyard belonging to the Hiking Club of Catalonia, the temple isn’t easy to find but more than worth the effort to seek out. Boasting striking 9-metre tall Corinthian columns, the temple was originally linked to the Roman Forum before being swallowed up by the Byzantine urban fabric of medieval Barcelona after the fall of the Roman empire. The temple ended up being hemmed in on all sides by later developments, a state of affairs that endured until the Gothic palace that housed the temple was bought by the Hiking Club in the opening years of the 20th century, who thankfully financed a new courtyard designed by Lluis Domènech i Montane to appropriately display the ancient ruin to the public. 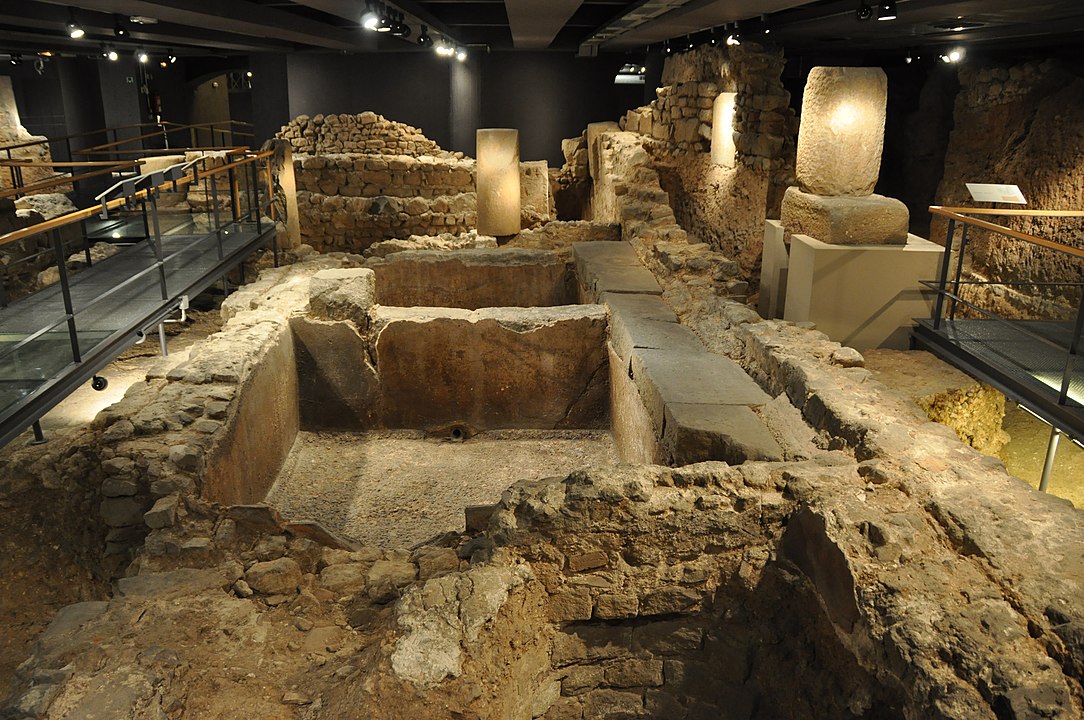 This fascinating archaeological museum is located in the evocative surroundings of a medieval palace, but don’t let that fool you: a visit to MUHBA will see you heading underground to explore extensive excavations from ancient Barcino. Walk the streets of the city just as it was two millennia ago, and pass by ancient laundromats and bathhouses, wine shops and a fish factory producing the potent garum sauce so beloved of ancient Roman society. There’s over 4 square kilometres to explore down here, and the beautiful remains include a Roman domus decorated with mosaics, a sewer system and more. Charting the rise of Christianity, you’ll also come across the remains of a 6th-century church and baptistery. 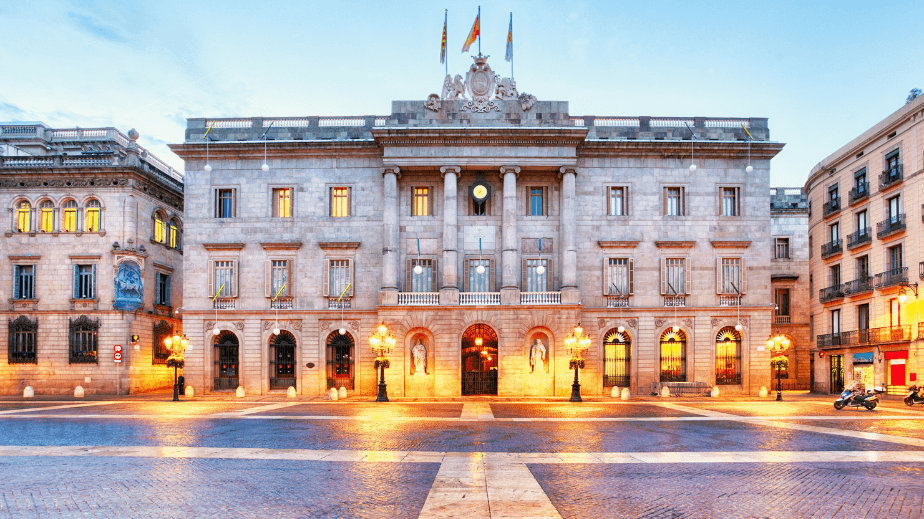 You’d need a keen archaeological eye to recognise it today, but this bustling square in downtown Barcelona began life as the most important civic space in ancient Barcino. Located at the crossing of the ancient city’s two principal streets, the cardo and decumanus, the arcaded square would have been home to administrative buildings, courthouses, important temples and the other principal buildings that breathed life into a city in the ancient Roman empire. After the fall of Roman Barcelona the square remained an important centre of civic life in the city, taking on the name Plaça de Sant Jaume after the medieval church that stood here until the 19th century. 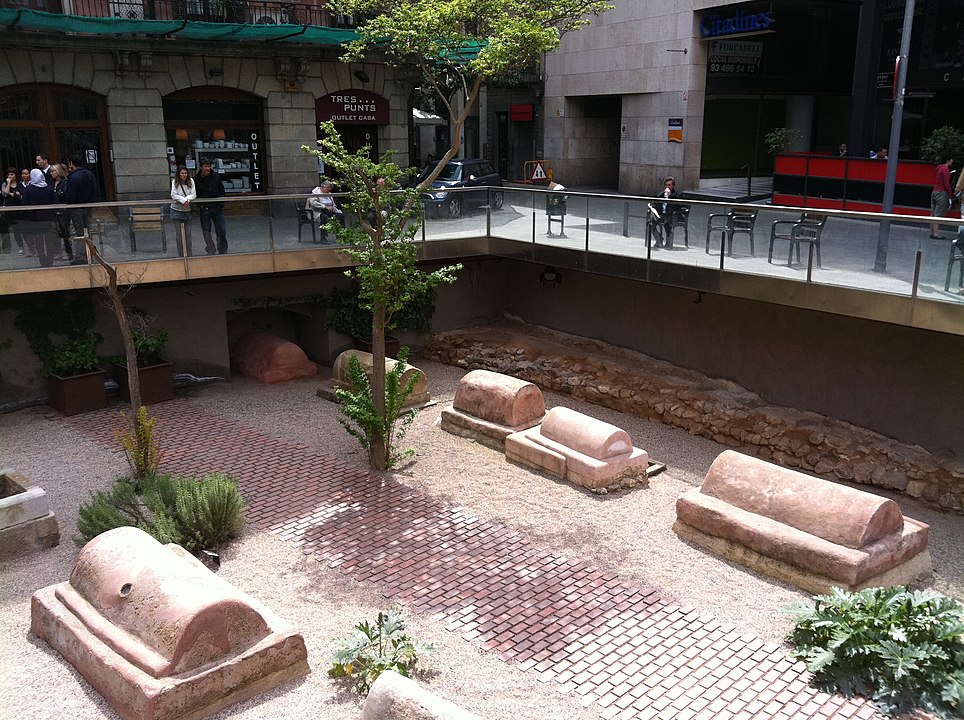 This Roman cemetery is located just steps from La Rambla, and provides the best evidence for ancient funerary practices in Barcelona. The site was discovered when restorations were being carried out in Plaza de la Villa de Madrid during the 1950s after the devastations caused by the Spanish Civil War. 95 tombs were discovered dating from the 1st and 2nd centuries AD, mostly belonging to members of the middle and lower classes of Barcino society. According to Roman law, burials were forbidden within the city walls; instead cemeteries tended to be located on access roads leading out of town, as is the case here.An elevated walkway gives an excellent view of the neat rows of simple tombs, whilst a visitors centre provides more information on ancient funerary practices and death rituals. 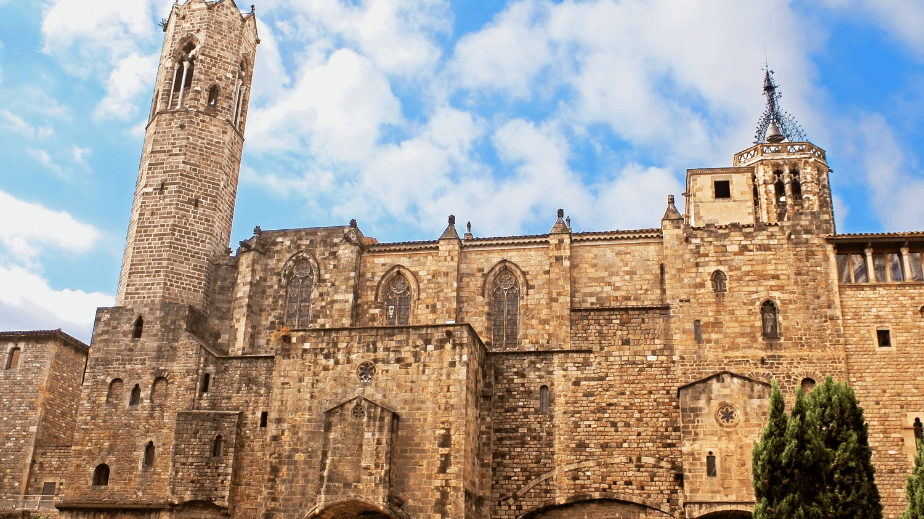 A rich palimpsest documenting the chequered history of Barcelona from its ancient foundation up to the present day, Plaça Ramon Berenguer conserves a well-preserved stretch of the ancient city walls first built in the 1st century AD and heavily restored in the 4th. The walls ringing the entire perimeter of the Roman city were 16 metres high and studded with no fewer than 74 watchtowers. Reflecting Barcelona’s 2,000 years of continuous occupation, the square is named after a 12th-century ruling count; the 14th-century royal chapel of Santa Àgata meanwhile is built right on top of the Roman wall, providing a solid foundation and a commanding position for one of the medieval city’s most important monuments. Head inside to gaze on an absolute masterpiece of Gothic art in Barcelona, Jaume Huguet’s magisterial Epiphany altarpiece. 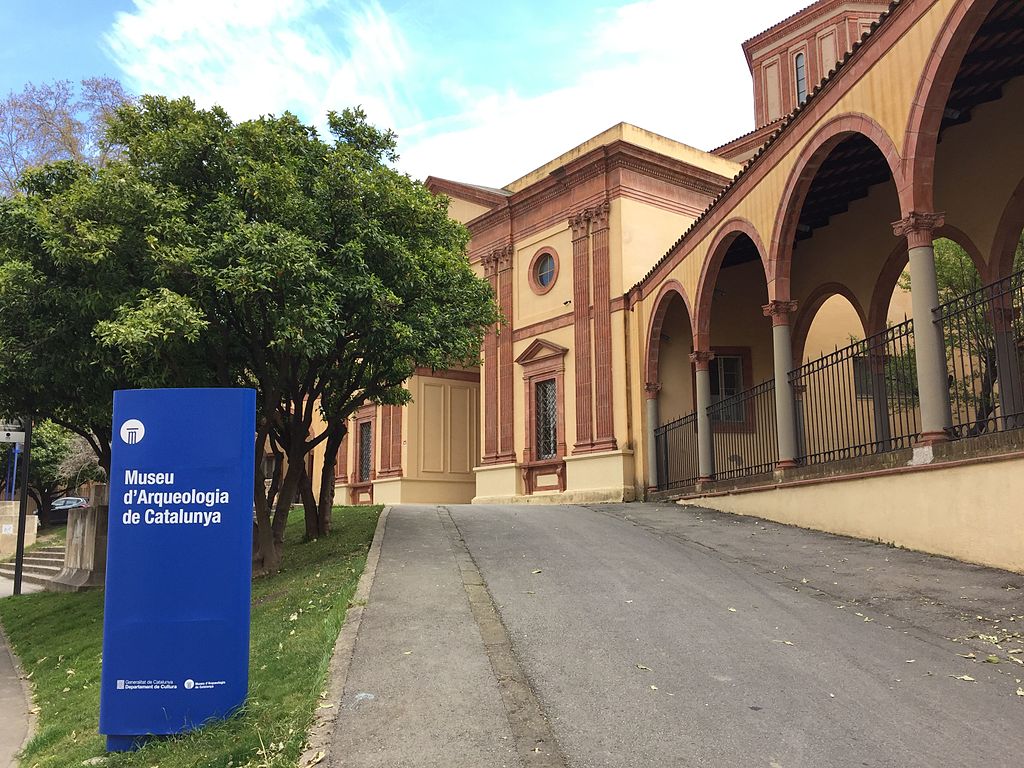 Barcelona’s largest collection of archaeological artefacts is housed in a palace built as part of the 1929 World’s Fair high on Montjuic hill, and boasts everything from palaeolithic finds to Phoenecian statues and Visigothic religious objects. But it’s the Roman section that really shines here, with a series of mosaics unearthed in and around Barcelona in pride of place. Look out for a charming mosaic depicting the Three Graces, or the dramatic 3rd century rendering of Bellerophon riding on the winged horse Pegasus doing battle with a chimera.

We hope you enjoyed our guide to the ancient sites of Barcelona! Through Eternity Tours offer a range of expert-led guided itineraries in the Catalan capital. To see the city at its best, join us on our Barcelona tours!