Campo de’ Fiori and the Sinister Shadow of Giordano Bruno 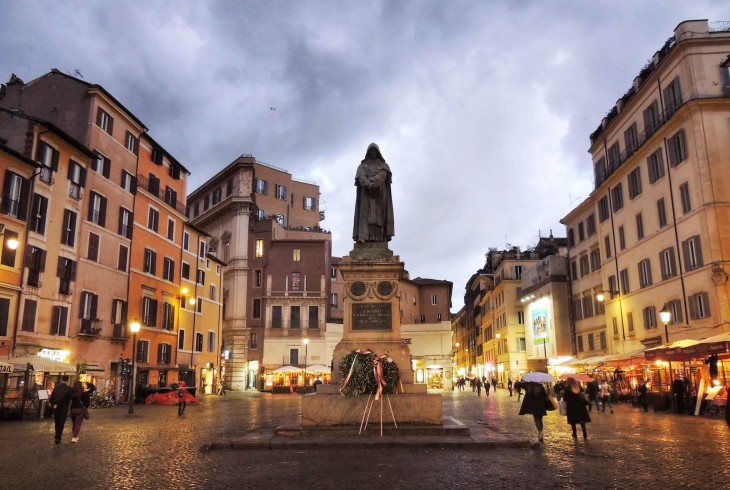 To Bruno, from the generation he foresaw, here where the fire burned.

Towering above Campo de’ Fiori, Giordano Bruno casts one of the longest shadows in all of Rome. The Eternal City may be a showcase of the flamboyant and charming excesses of all things Baroque, but this is a monument of truly Gothic proportions. Amongst the kaleidoscopic superabundance of pumpkins and tomatoes, spices and cheeses that overflow their stalls and invade this wonderfully picturesque square, the cowled, heretical philosopher-monk glares relentlessly overhead. His eyes are fixed firmly on the distant Vatican, and the menacing words he uttered to the Inquisitors who consigned him to the flames seem forever on his lips:

‘Perhaps your fear in passing judgement on me is greater than mine in receiving it.’ 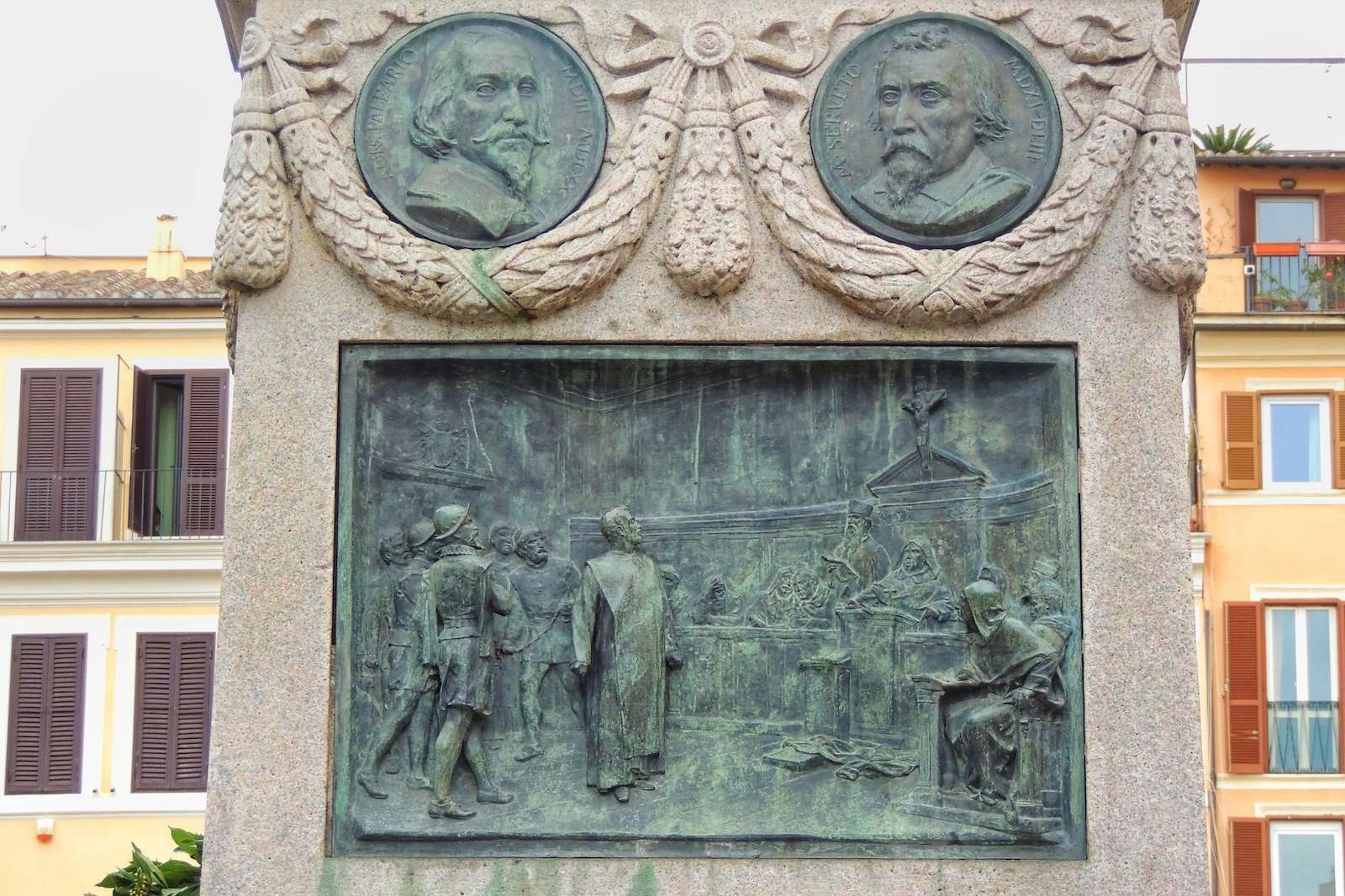 Campo de’ Fiori, the field of flowers: serene syllables that hide a gruesome history. Looming over the fruit markets and bustling bars that the square is famous for today, Bruno’s presence is a macabre reminder of the stench of burning flesh that once wafted across these cobbles. For the Campo was where the pyres of the Roman Inquisition burned brightest in the 16th and 17th centuries, where free-thinkers of all kinds would meet their fiery ends. Indeed, it was right here - exactly 421 years ago today on February 17th of the Holy Jubilee year of 1600 - that Bruno was immolated on a burning pyre, accompanied by the sounds of Christian monks singing litanies and praying for him to recant in order to save his eternal soul. 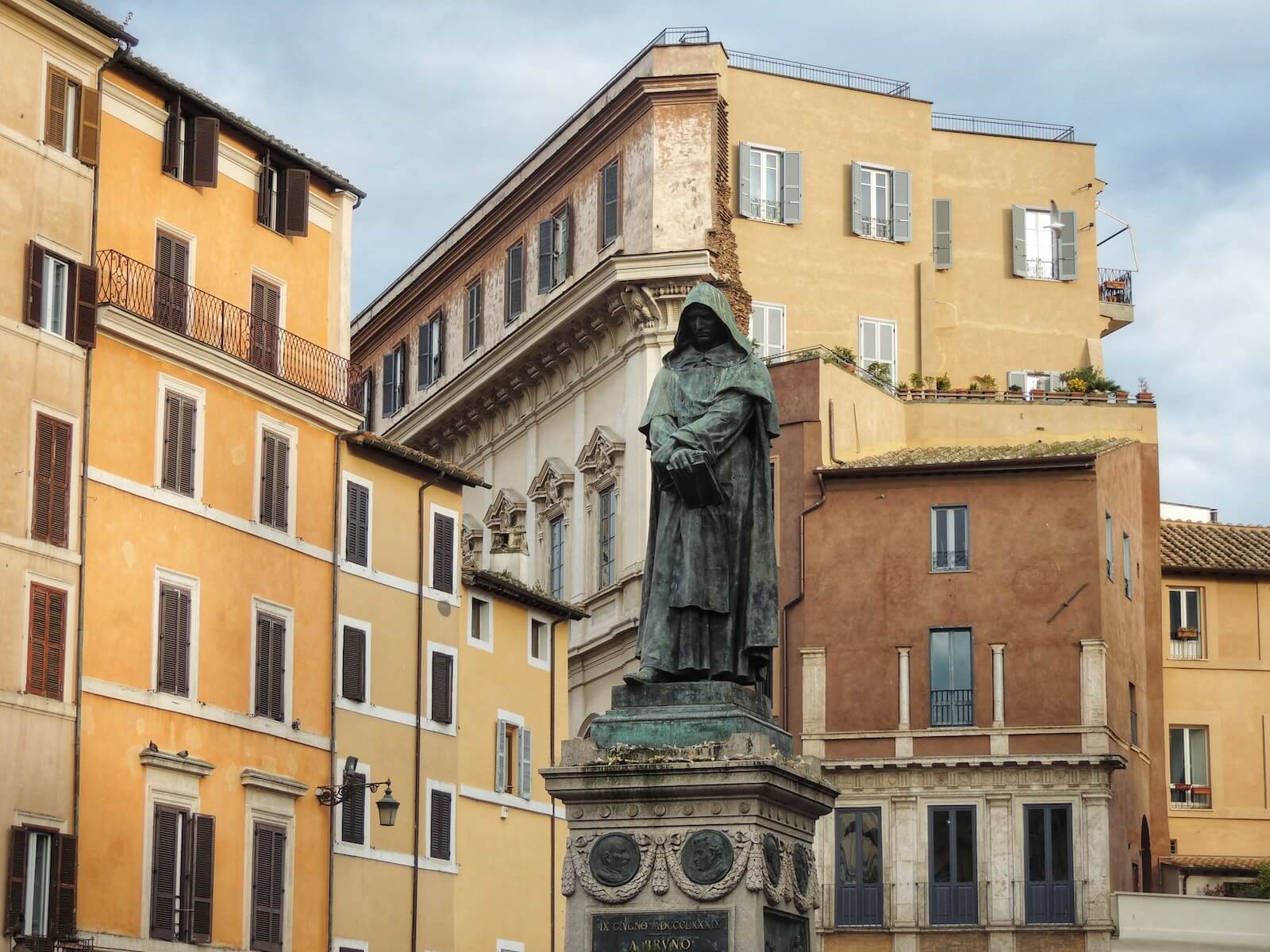 But Bruno, unlike Galileo before him, had no intention of taking back a single word. Philosopher, scientist and one-time friar, there was something disquieting about him. Rumours of magic and alchemy persistently swirled about his name, and he was thought by many to converse with the devil himself. His real supposed misdeeds were rather more prosaic. Full of the latest cosmological ideas and an expert in the art of memory, Bruno preached that the universe was infinite and ever expanding, and that intelligent life beyond our world was a near certainty. Hardly controversial stuff for those of us raised in a world after Einstein and quantum physics, but in 16th century Italy such views were unforgivable deviations from established Catholic teaching. 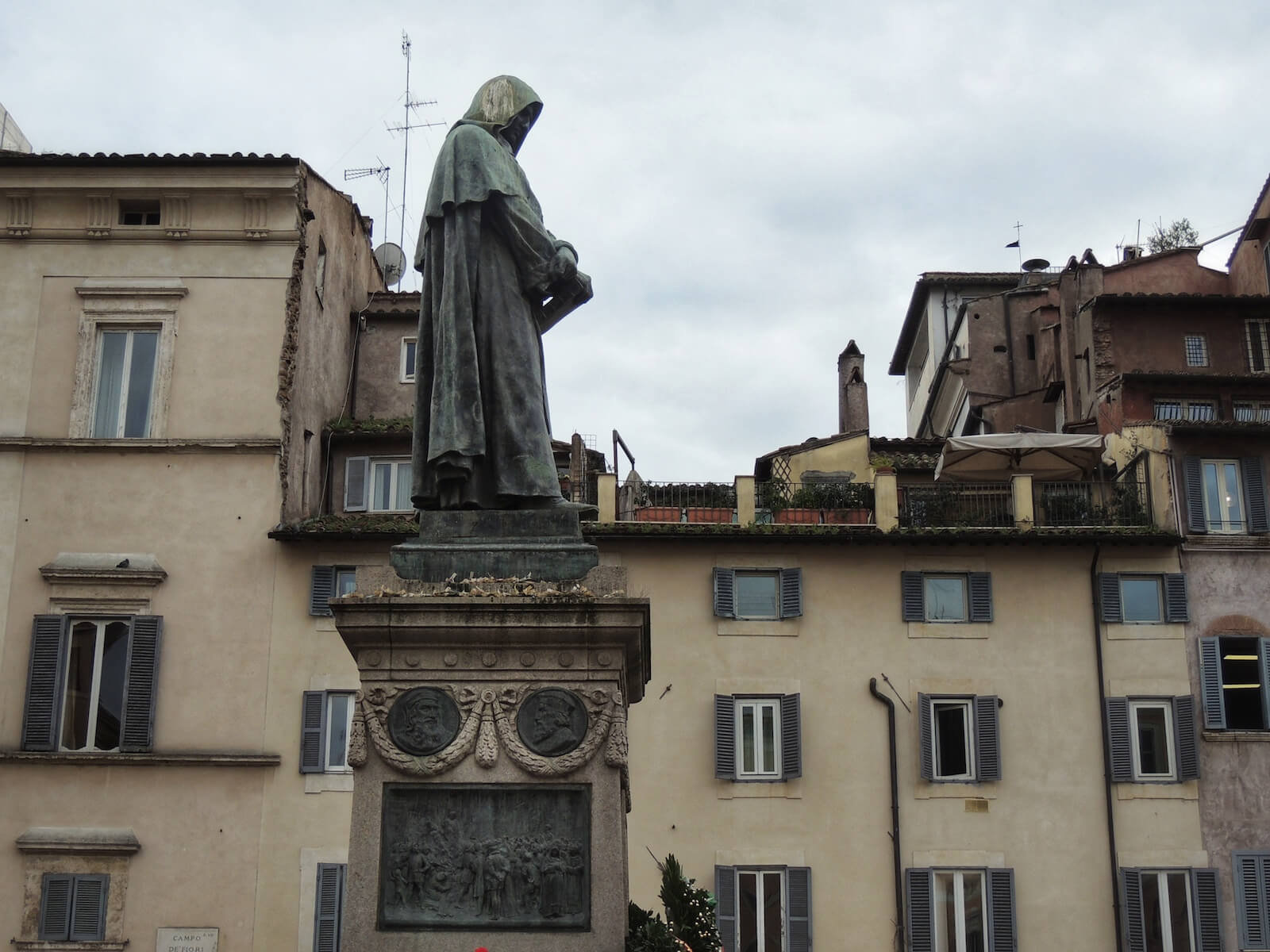 Celebrated and condemned by his contemporaries in equal measure, Bruno made a career lecturing at the finest universities across the continent. A series of controversial talks at Oxford University solidified his renown - and notoriety. With fame came damaging accusations of heresy. Bruno was playing with fire, and would soon get burned. Literally.

Shortly after returning to Italy after his years of wandering, Bruno was denounced to the Inquisition in 1592. What exactly were his enormous crimes? Besides dabbling in theories of reincarnation and the transmigration of souls, Bruno had the nerve to support the Polish astronomer Copernicus’ theory that the earth was an insignificant planet rotating around the sun and hurtling through an ever-expanding universe, rather than a fixed point at the centre of the cosmos. What’s more, in a nod to quantum theory Bruno had proposed the existence of multiple worlds. Bruno had the courage of his convictions, but correctly anticipating some of modern science’s most central tenets didn’t save him from being tossed into the consuming flames. 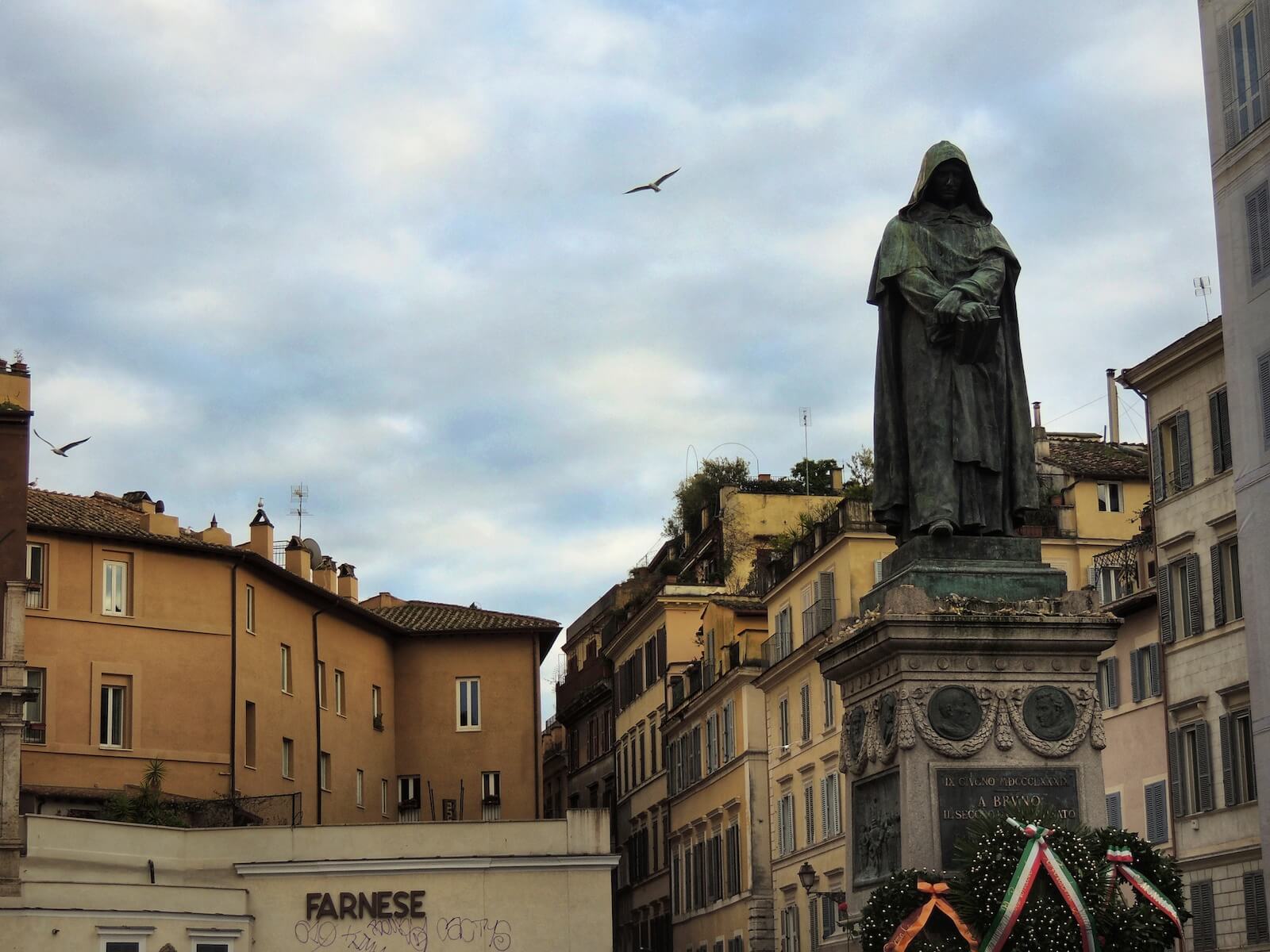 In the climate of the rigid orthodoxies of the Counter-Reformation, Bruno’s unorthodox teachings and writings demanded a strong response. After his denunciation, Bruno was handed over to the Roman authorities and spent the next seven years in confinement, much of it in the infamous prison of Tor di Nona. Despite the best efforts of a squadron of learned inquisitors and theologians however, a recantation was not forthcoming. Bruno’s exasperated chief inquisitor finally conceded defeat, and reluctantly sentenced Bruno to death. As his body disintegrated in the inferno, the uncompromising Bruno didn't utter a sound. 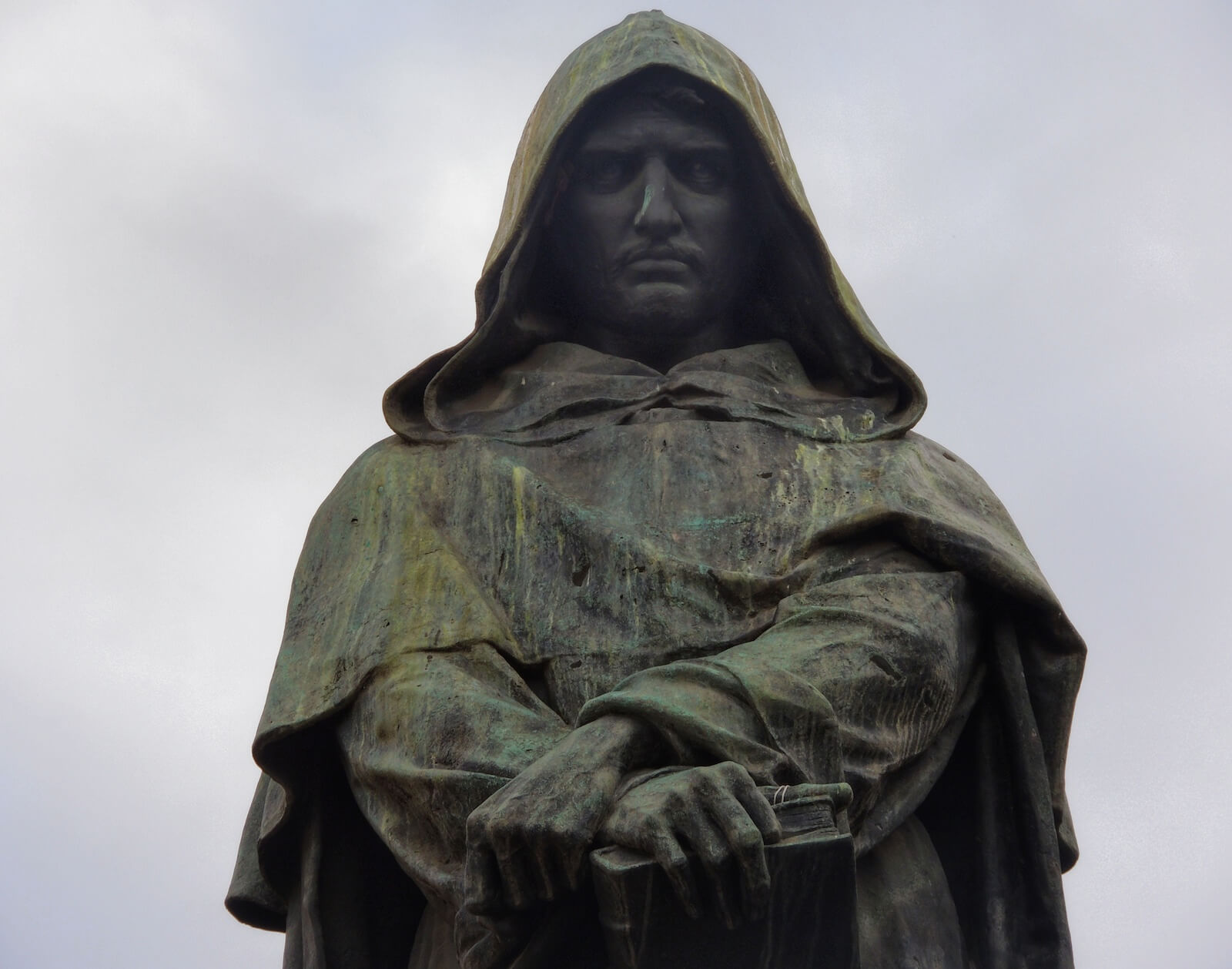 Just as the inquisitors had intended, Bruno's intellectual legacy was largely extinguished in the fires that consumed his body.  For the next two and a half centuries, the writings of Il Nolano (as Bruno was known in deference to his hometown) fell into relative obscurity, and it was only with the formation of the Italian Republic that he was re-discovered, a fitting anti-papal forebear for the young firebrands who had conjured into existence the modern Italian state.

In 1885 a glittering group of international writers and academics, including Victor Hugo and Henrik Ibsen, conceived the idea of honouring Bruno at the site of his execution. Children of a world in which religious certitudes had come tumbling dramatically down, they saw in his writings and persecution the long and difficult birth of their own intellectual heritage. Despite fierce resistance from the Roman clerics the plans were approved, and Bruno rose once more from the ashes. 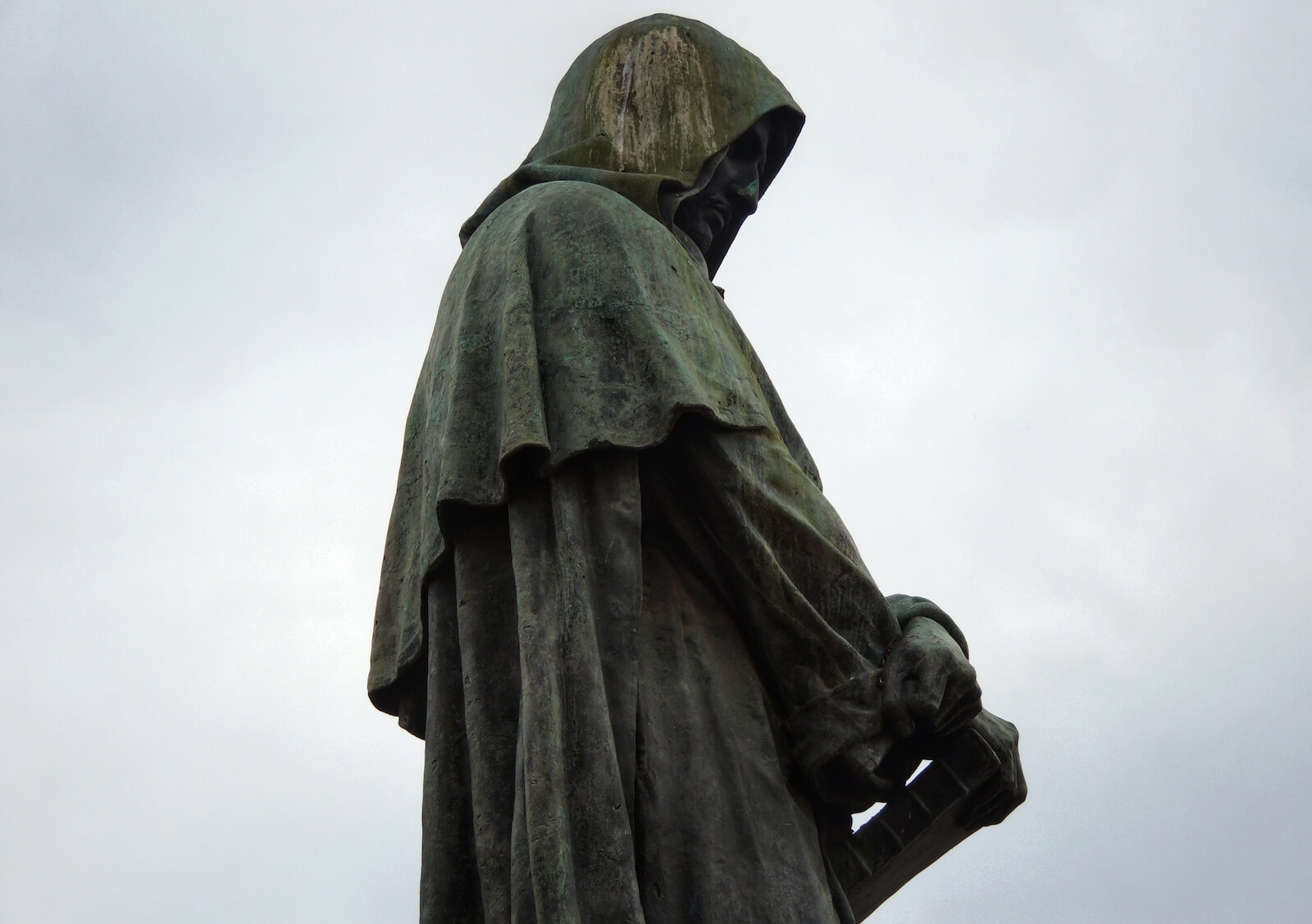 To this day Bruno gazes reproachfully over the rooftops of Rome towards the Vatican, whose rigid doctrines condemned him to his bitter fate. What he would make of the pleasure-seekers who throng the Campo every evening is anyone's guess, but the pregnant sense of foreboding exuded by his majestic bronze avatar does at least guarantee them the most atmospheric aperitivo hour in the city.  So the next time you stop off for a drink on your way through the piazza, raise a glass to free-thinking Giordano and take a moment to reflect on yet another of the city’s hidden pasts.