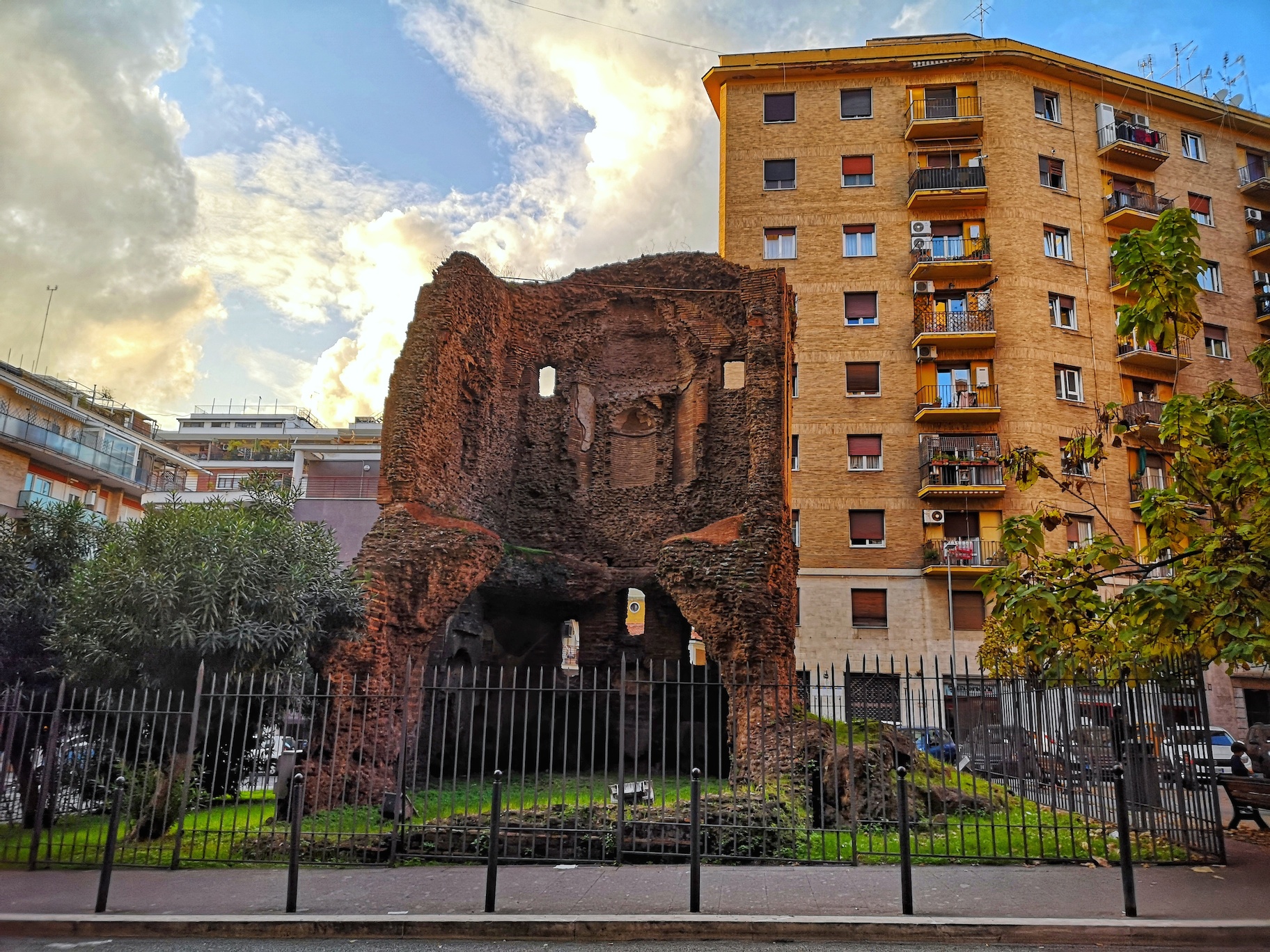 If you find yourself wandering through the bustling modern suburb known as the Quartiere Africano in Rome's north-eastern suburbs, chances are you'll come across one of the city's most intriguingly named monuments - La Sedia del Diavolo, or the Devil's Chair. Surrounded by 20th-century residential buildings, these days there doesn't seem to be anything particularly disquieting about the tumbledown ancient ruins, but it wasn't always thus.

Located just off the Via Nomentana, one of the principal arteries heading north-east out of the Eternal City in antiquity and still a major thoroughfare today, the monument began life as a mausoleum built to house the earthly remains of an important Roman in the 2nd-century AD. As the construction of funerary monuments was forbidden within the city's sacred boundaries, the sepulchres of well-off Romans dotted the sides of the roads heading out of town (the Via Appia is still thickly lined with tombs even today). For another tomb surviving along one of Rome's consular roads, we have to look no further than the beautiful Mausoleum of Tor Quinto just a few hundred yards from the Devil's Chair. Originally located along the Via Flaminia, it was moved onto the Via Nomentana by the archaeologist Giacomo Boni in the 19th century. 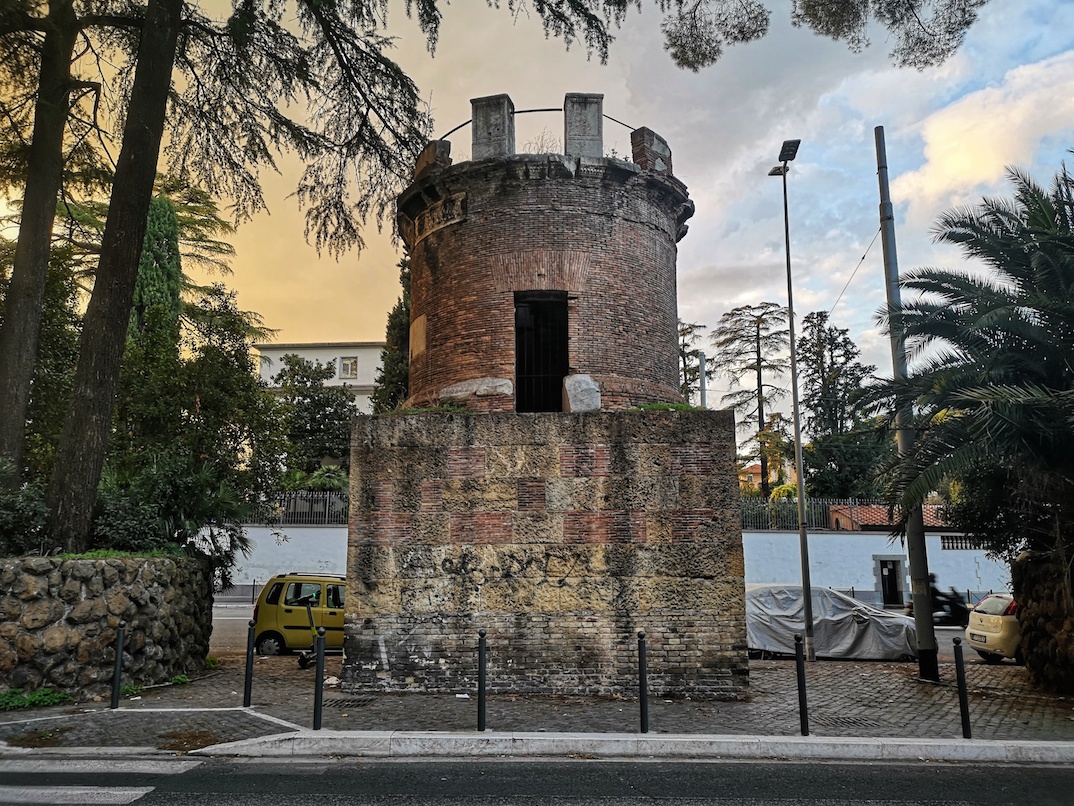 The Mausoleum of Tor Quinto, flanking the Via Nomentana.

But let's get back to the Sedia del Diavolo. Although the patron of what would come to be known as the Devil’s Chair has never been definitively identified, most scholars believe the mausoleum to have been constructed to honour one Elio Callistio, a freed slave in the retinue of the Emperor Hadrian. Originally the impressive funereal monument would have taken the shape of a pedimented temple set on a a high podium base, with two levels of rooms unfolding within supported by arches and studded with niches. With the passage of time much of the original structure was lost, and by the time the Middle Ages rolled around the mausoleum presented the forbidding aspect of a great hunk of masonry flanked by two lateral arms. It looked, in short, rather like a massive throne in the sky, similar to the bishop’s chairs you might see in any medieval cathedral, but cast on an epic scale designed for superhuman occupants. 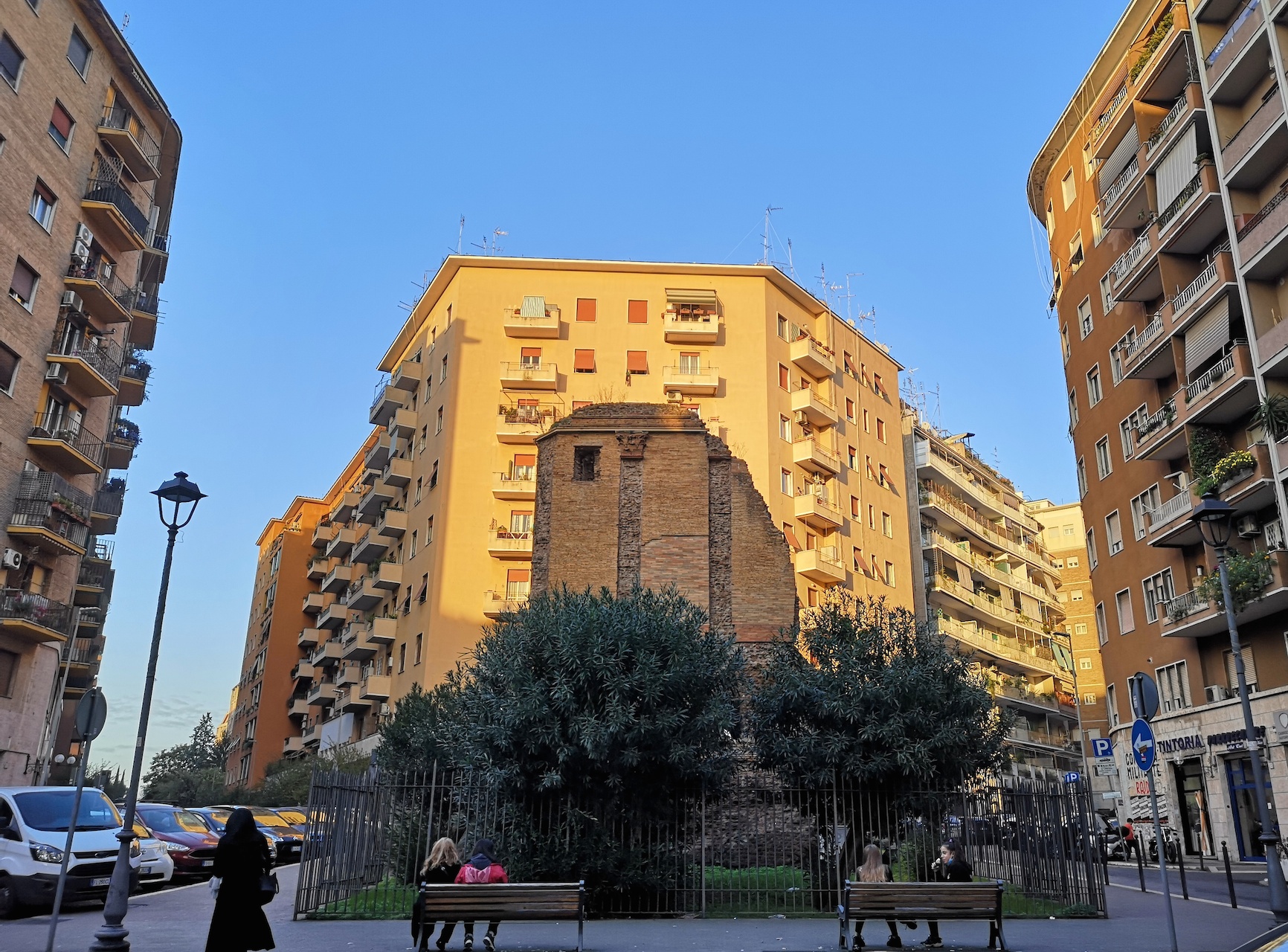 By this time the now ruined ancient sepulchre found itself isolated in the wilds of the Roman Campagna far from the confines of the now-shrunken city limits, a dangerous hinterland that was the preserve of wolves and bandits. For these latter, the blasted mausoleum proved a perfect place of shelter as they marauded across the countryside slitting throats and purloining purses, and the mysterious glow cast by the fires they lit here naturally enough set local tongues wagging. 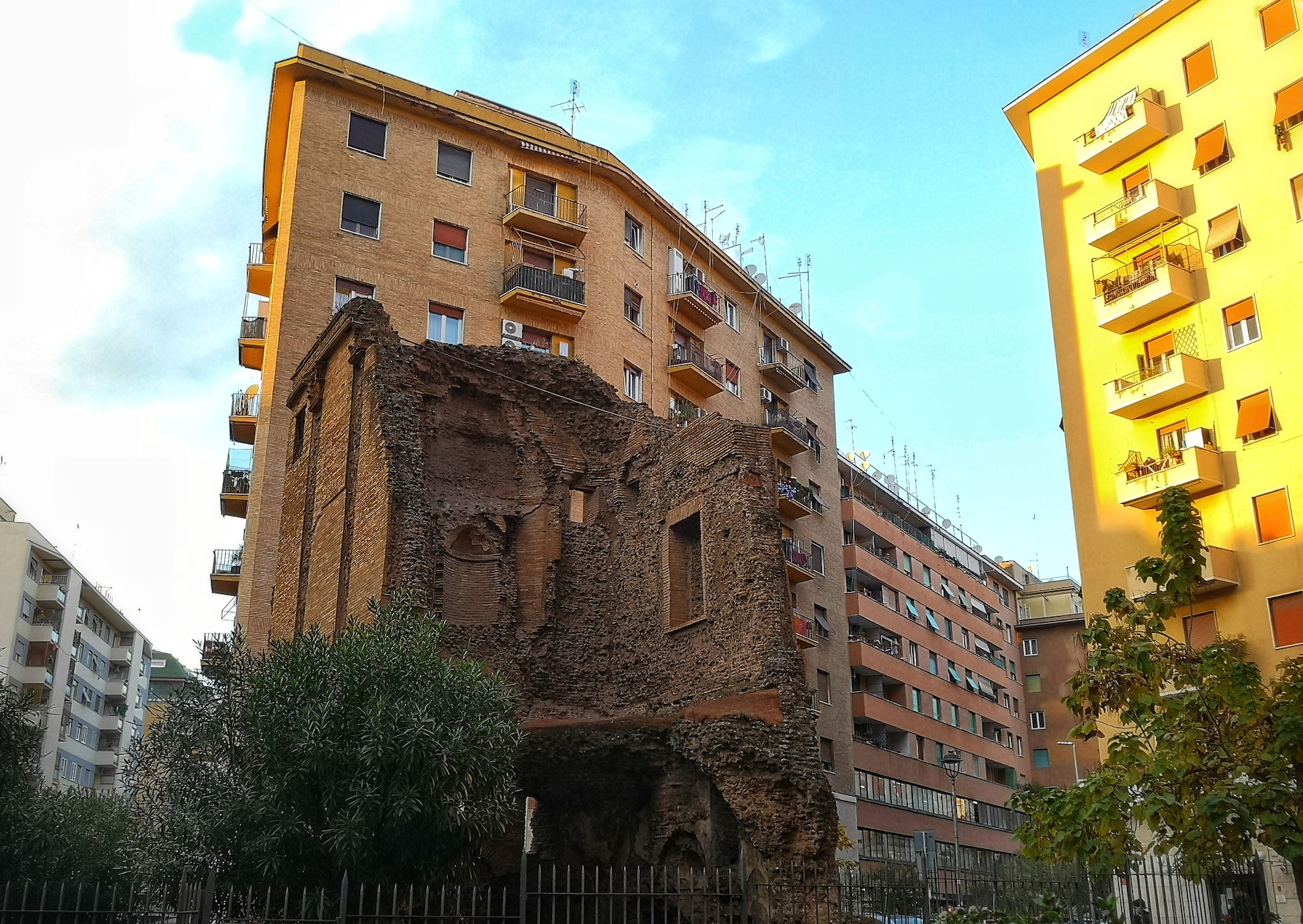 Picture the scene: scurrying home after nightfall through a desolate no-man’s land peopled by ne’er do wells and the scattered ruins of a dimly comprehended past, you see the eerie flickering light of guttering flames bouncing off the imposing stone walls of the ruin, the cackles and shrieks of drunken bandits echoing through the darkness. It would take a strong mind and a steady nerve indeed not to be convinced that the devil rode abroad, and that this was his macabre base of operations. 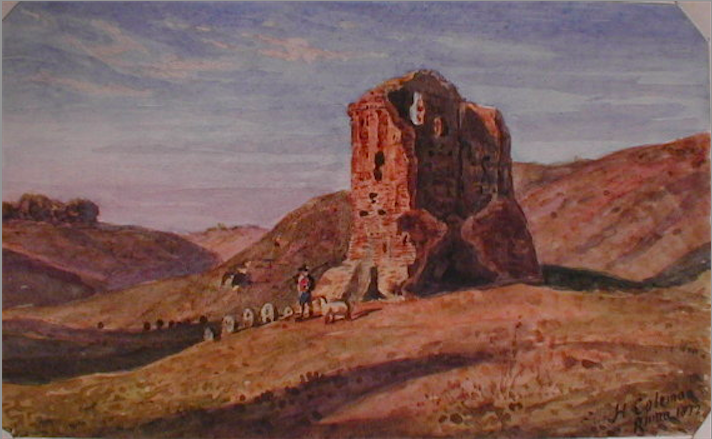 It comes as little surprise then that over the centuries any number of popular legends have done the rounds attributing arcane and macabre powers to the ruins. One of the most outlandish features the mysterious Renaissance alchemist, self-professed miracle worker and definite charlatan Leonard Thurneysser (also known as Zum Thurn, after the grand estate he owned in Basel): on the run from the law and various enemies in his native Switzerland, the alchemist finally pitched up in Rome where he got a gig as the personal doctor to Cardinal Sittich II von Hohenems. 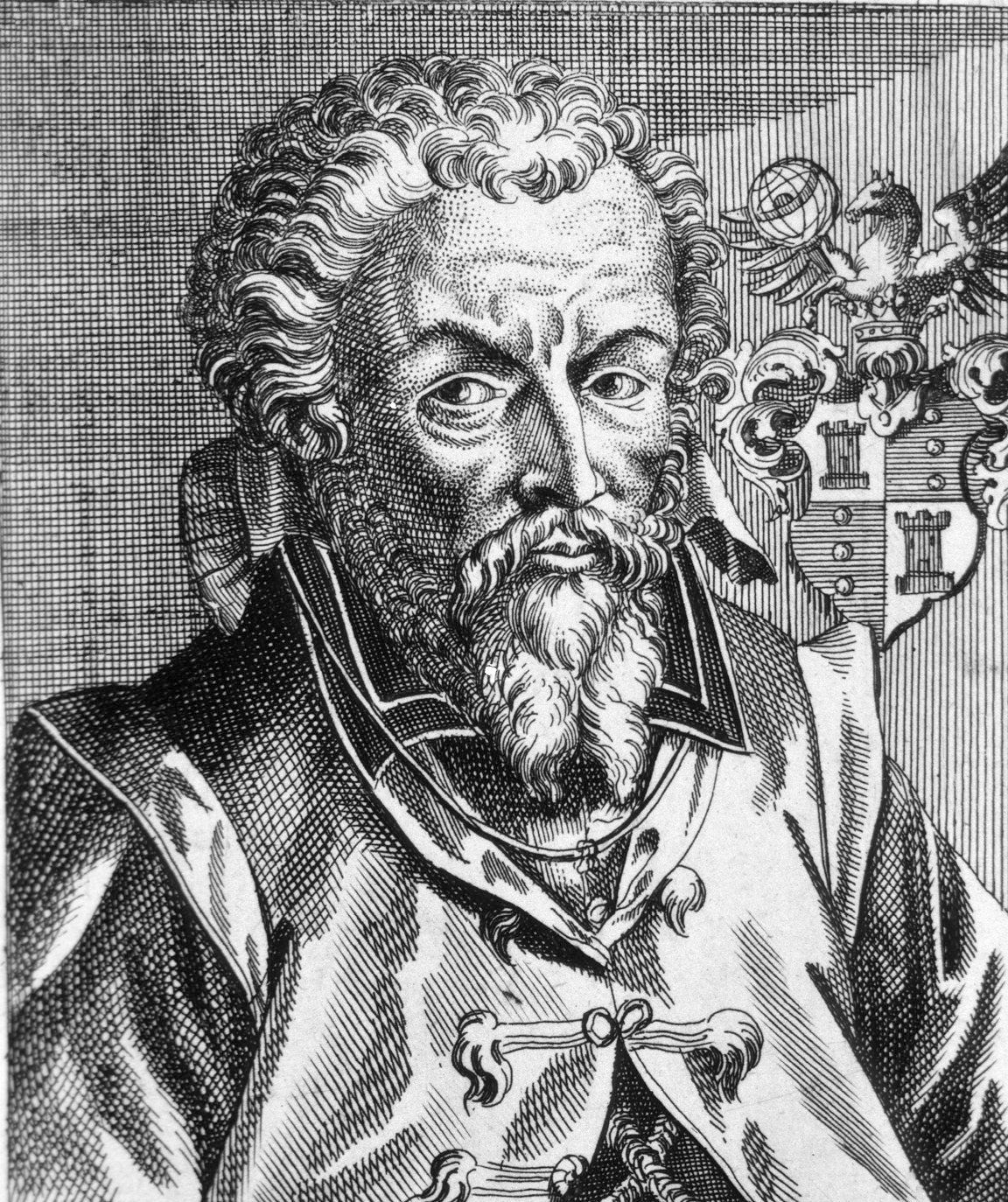 Obsessed with magical spells, the story goes that the good doctor’s interest in the occult was soon piqued by the mysterious Devil’s Chair, where he apparently scrawled the word KABALA on the stones of sepulchre, each letter concealed in a different place. Anyone lucky enough to uncover the inscription gained magical powers to alter the course of their fate. Sadly, given Thurneysser’s mile-long record of snake-oil peddling and dodgy medicine across Europe, it seems certain that anyone reciting his faux-cabalistic mantras at the Devil’s Chair were likely in for a disappointment.

The final member of our rogues’ gallery takes us into the opening years of the 19th century, when a local shepherd by the name of Giovanni claimed to possess miraculous healing powers over intestinal illnesses thanks to a powdered tonic he created by crushing up bricks from the Devil’s Chair. Things took a turn for the worse after Giovanni successfully healed a young woman by the name of Assunta from dysentery and was in short order accused of witchcraft by church authorities and forced to flee. The Devil’s Chair was to be silent once more.

And lest you think that the story of the Devil’s Chair was merely the preserve of a more gullible age obsessed with witchcraft and malefaction, it turns out that the legends surrounding the throne of Beelzebub had a long and fruitful afterlife. So upset were they by the demonic associations that their neighbourhood’s nomenclature conjured in the public imagination, a group of locals finally banded together to petition the council to change the name of the piazza that plays home to the ancient ruin in the 1950s. Their request accepted, these days the square is known by the more prosaic name of Piazza Elio Callistio. 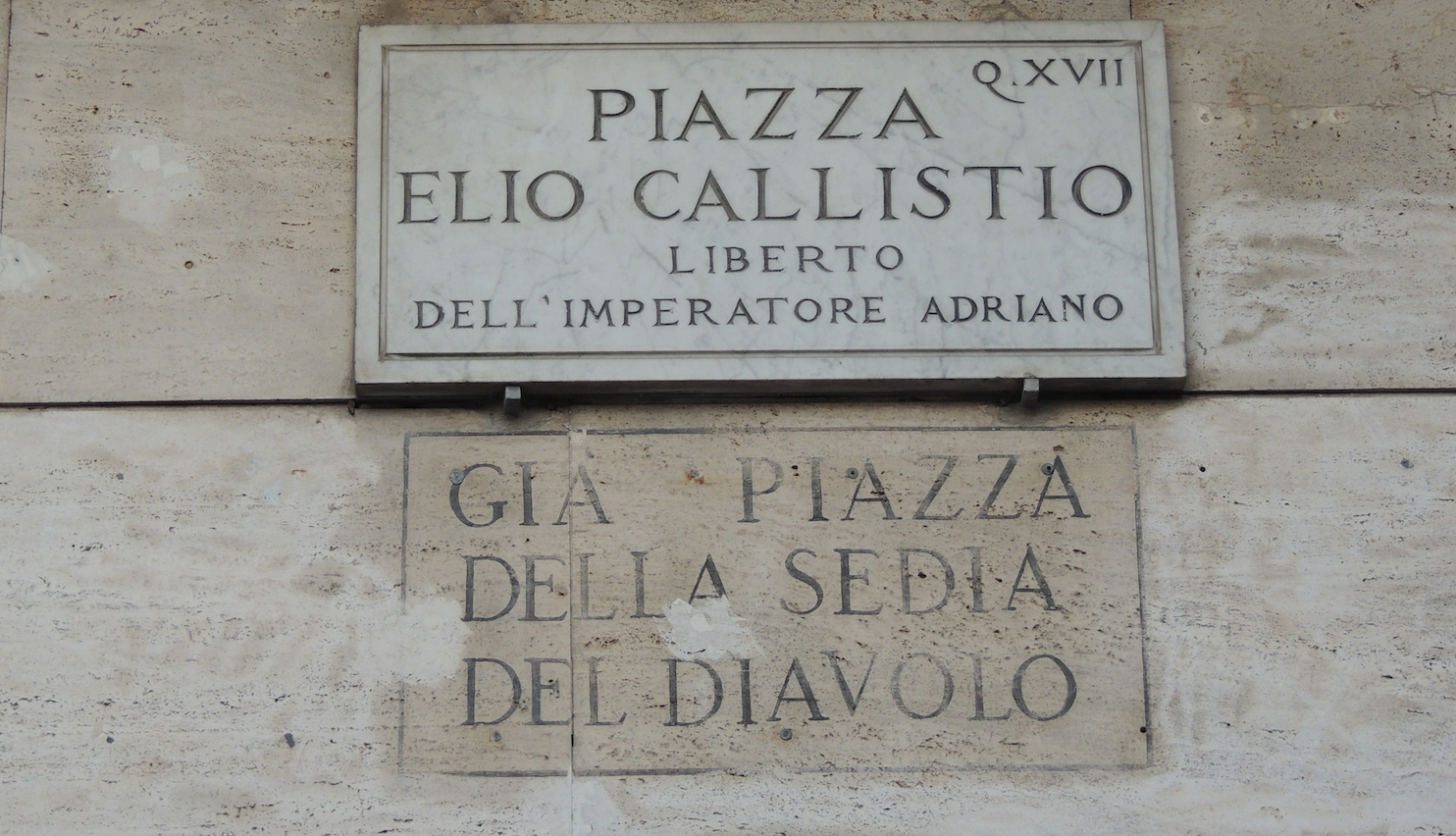 But the Devil’s Chair casts a shadow even to this day. Beneath the street sign bearing the piazza’s modern name is an inscription: not even a plaque, merely scrawled onto the wall of the palazzo, are the words ‘già Piazza del Sede del Diavolo’ - formerly the Piazza of the Devil’s Chair. The devil might be gone, but he's not forgotten.

If our virtual visit to the seat of the Dark Lord himself has piqued your interest and left you wanting more, it turns out there is another so-called Devil's Chair in Italy! Head down to Puglia to discover the remains of the medieval town of Montecorvino, where a similar mysterious ruin dominates the surrounding landscape.