In Search of Roman Time: The Water Clock of Villa Borghese 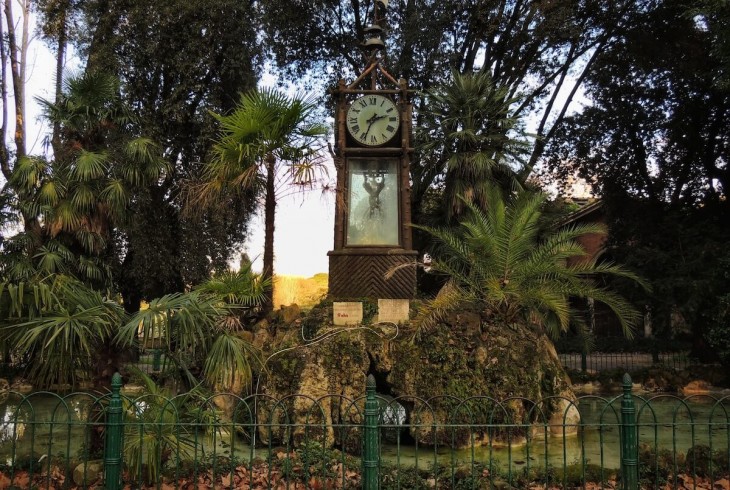 Ask Romans where their favourite spots for a sunset passeggiata are, and it’s a safe bet that the beautiful Terrazza del Pincio in the Villa Borghese will feature near the top of most lists. Boasting spectacular views over Piazza del Popolo below and St. Peter’s Basilica in the distance, the gardens atop the Pincian Hill are a charming confection of soaring pines and shady avenues, tinkling fountains and sculptures honouring some of Italy’s most famous sons. There are some fascinating hidden corners here too if you know where to look, none more enchanting than the 19th-century water clock tucked away on the eastern edge of the gardens. 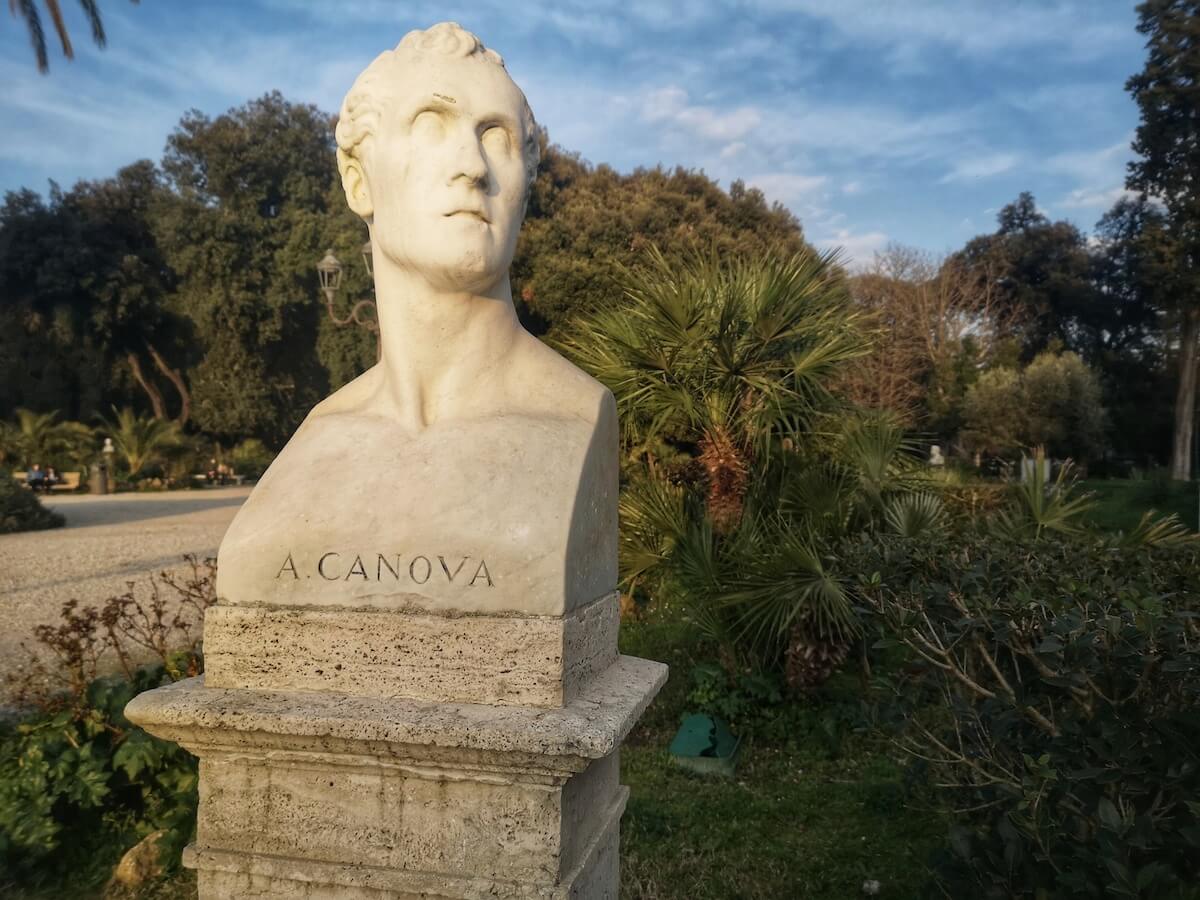 Ever since the incredible sundial known as the Solarium Augusti was constructed way back in the reign of the emperor Augustus, Rome has seen its fair share of impressive timepieces. The exotic looking contraption concealed in a woodland oasis on the Pincian Hill is a worthy addition to the list, an incredible piece of 19th-century fantasy and feat of hydraulic engineering that joins technology, art and nature in spectacular synthesis.

Emerging from a patch of thick and verdant undergrowth, when you first catch sight of this mechanical marvel you’d be forgiven for thinking that you’ve stumbled into a scene from Alice in Wonderland. A rickety wooden bridge suggestively leads across the waters of a tiny artificial lake to an even tinier island, set on a miniature rocky cliff. Rising from its summit is a cast-iron tower sculpted in the form of rustic tree branches supporting four clock faces, ticking off hours and minutes to the four points of the compass. 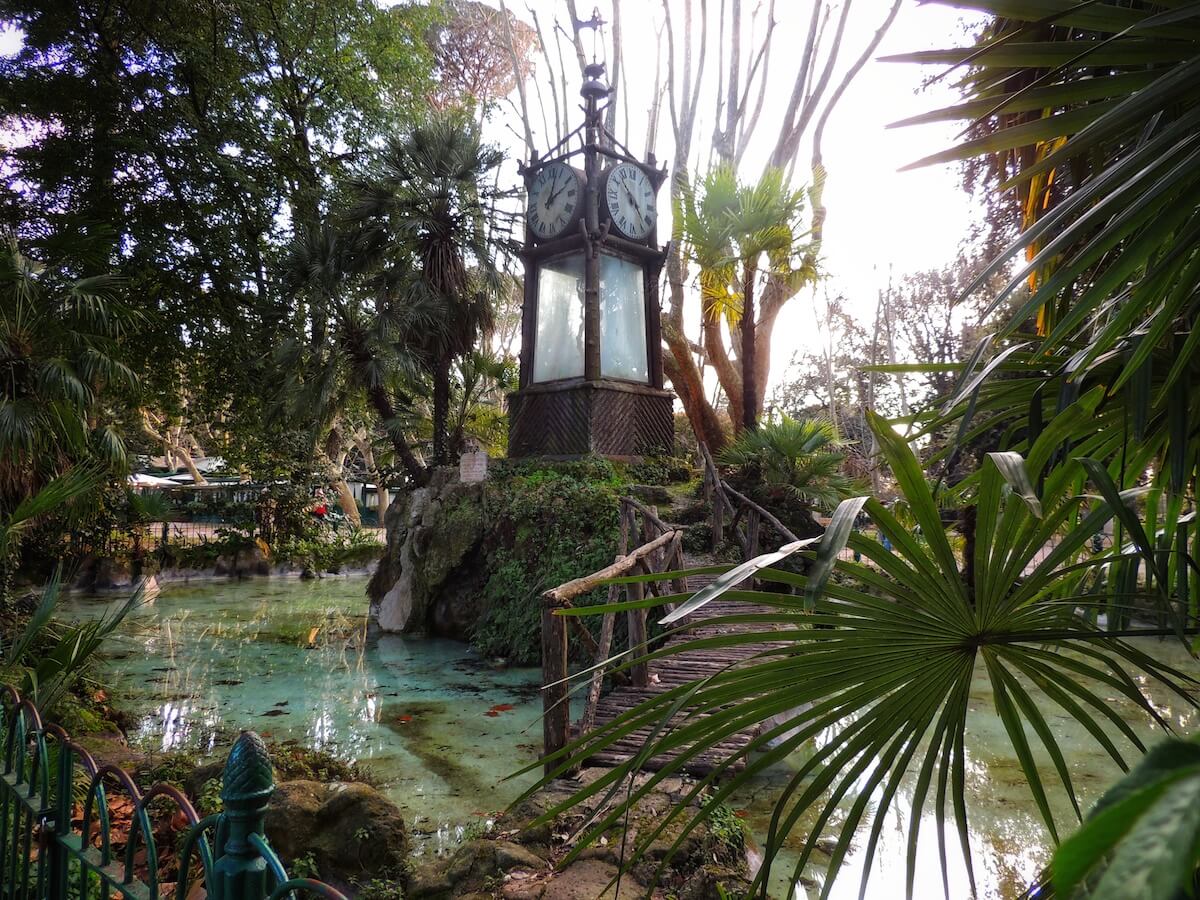 The water clock was the brainchild of Dominican friar and expert in mechanical engineering Giovanni Battista Embriaco (1829–1903). Member of a prominent Genovese family whose most illustrious sons spent centuries ruling vast territories in the Holy Land after playing an active role in the crusades, Embriaco was of decidedly more contemplative nature than his adventurous antecedents.

The humble friar instead occupied himself with the spiritual direction of the Dominican convent at Santa Maria Sopra Minerva just a few steps from the Pantheon. Besides teaching mathematics and philosophy, Embriaco was also in charge of the monastery’s famous astronomical observatory, outside which Galileo muttered his immortal quip ‘Eppur si Muove’ after being forced to renounce his scientific investigations during his trial for heresy in the 17th century. It’s somewhat ironic that it was here that Embriaco nurtured his expertise in the mechanical arts 200 years later, convinced that the extraordinary advances of modern science were perfectly compatible with his spiritual vocation. 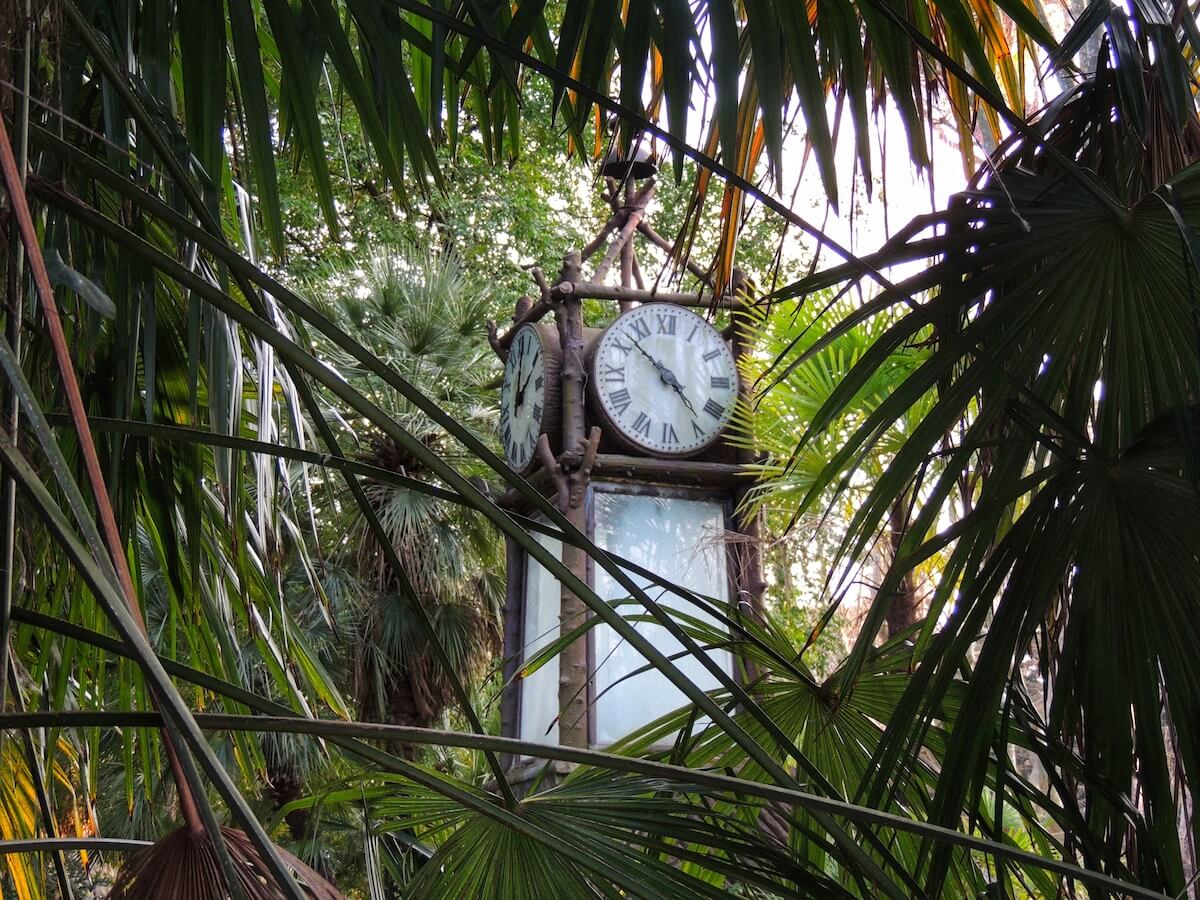 An inveterate tinkerer, Embriaco fashioned his first clock out of cardboard whilst still an adolescent, devised systems to enable pocket watches to run on a single winding for an entire month, perfected a method to allow clocks to reliably chime on the half and quarter hours, and successfully silenced the grinding gears of household timepieces. But it was to be his invention of a new kind of water clock, dubbed a hydrochronometer, that would make his name. 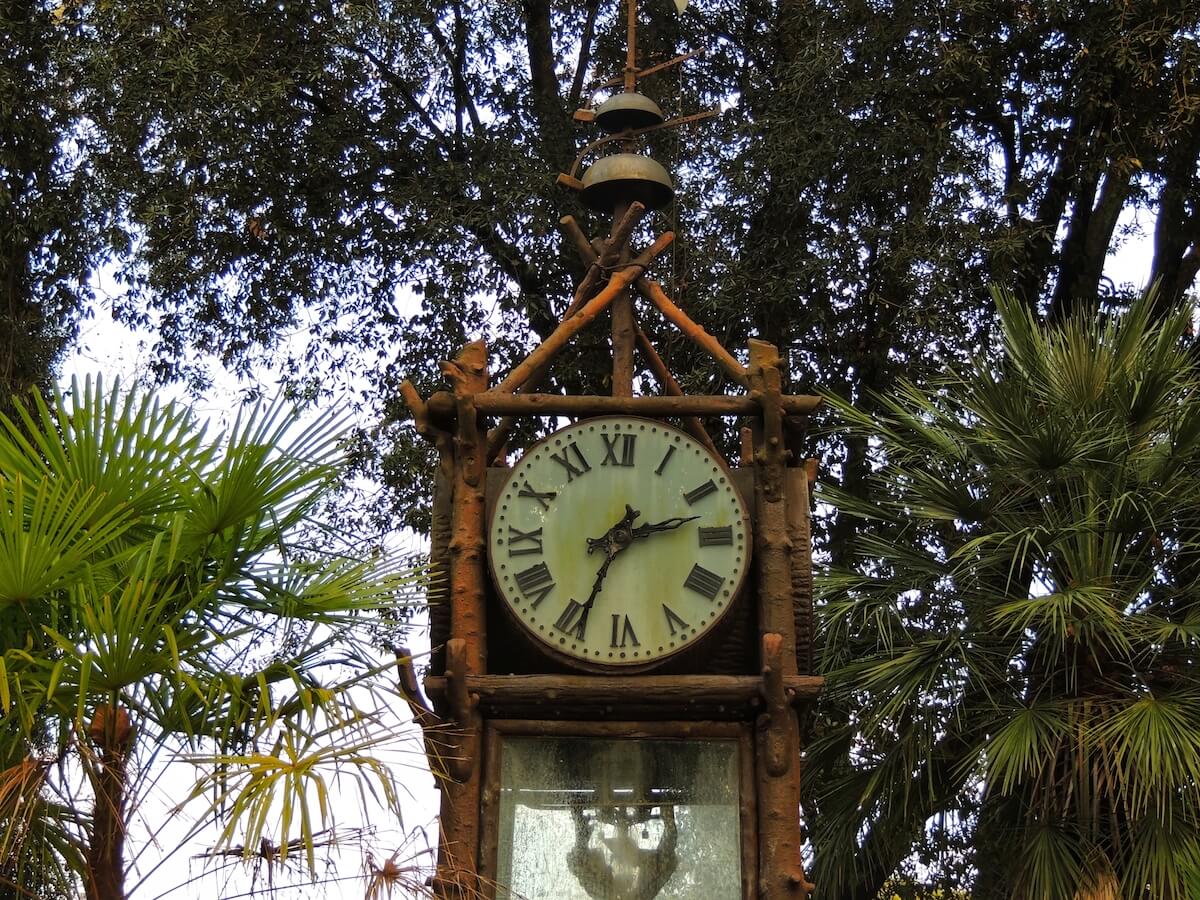 Embriaco first showcased his innovative water-clock designs at the 1867 Universal Exhibition in Paris. Unfortunately nobody there could work out how to operate the clock, and Father Embriaco himself was forced to make a trip to the City of Light to set up his new invention. By all accounts the friar’s timepiece was a roaring success, with no less a figure than Napoleon III voicing his appreciation.

Back in Italy, the Osservatore Cattololico considered Embriaco’s very public success to be a great coup for the Church in the face of claims that its relevance was waning in the face of new scientific and technological advances, throatily celebrating the achievements of the technologically clued-in religioso:

However much the impious have tried to denigrate the reputation of the religious,they haven’t succeeded in removing from the minds of the populace the image of the friar as a patient, meticulous and exact figure. And so the unveiling of Father Embriaco's clocks aroused universal excitement and admiration. 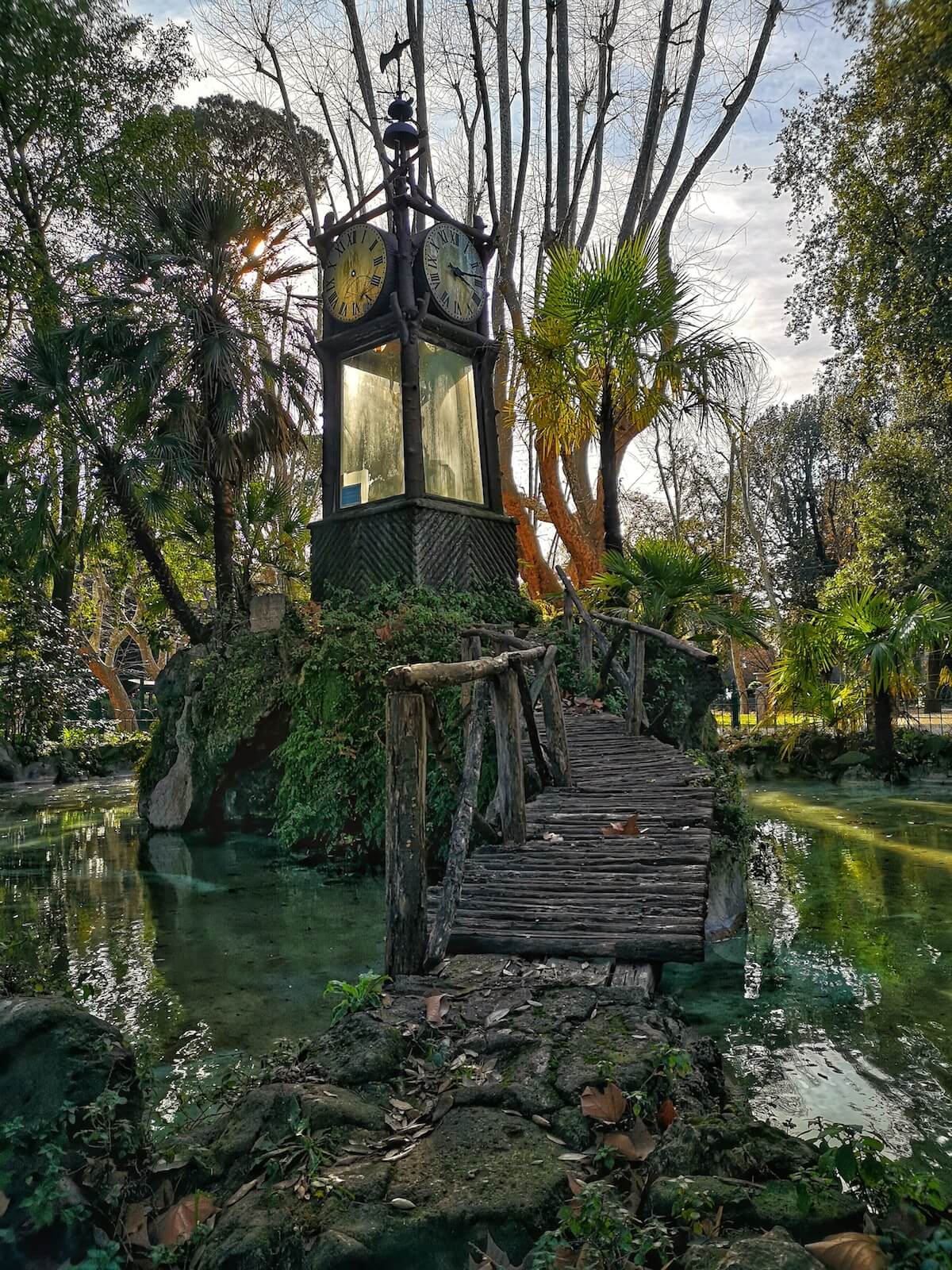 A final, definitive version of Ebriaco’s clock was permanently installed in the Borghese Gardens in 1873. The choice of location was based on the proximity of a newly constructed water tank designed to feed the park’s fountains and lawns with a ready supply of water. Embriaco realised that this plentiful abundance of flowing water rendered the park the perfect place for his experimental device, which works on the principle of two oscillating basins that are continuously and alternately filled and emptied of water, keeping the pendulum powering the gears in constant motion. Thanks to the continuous flow of water the clock never needs to be wound, counting off hours, quarter-hours and minutes with admirable precision. 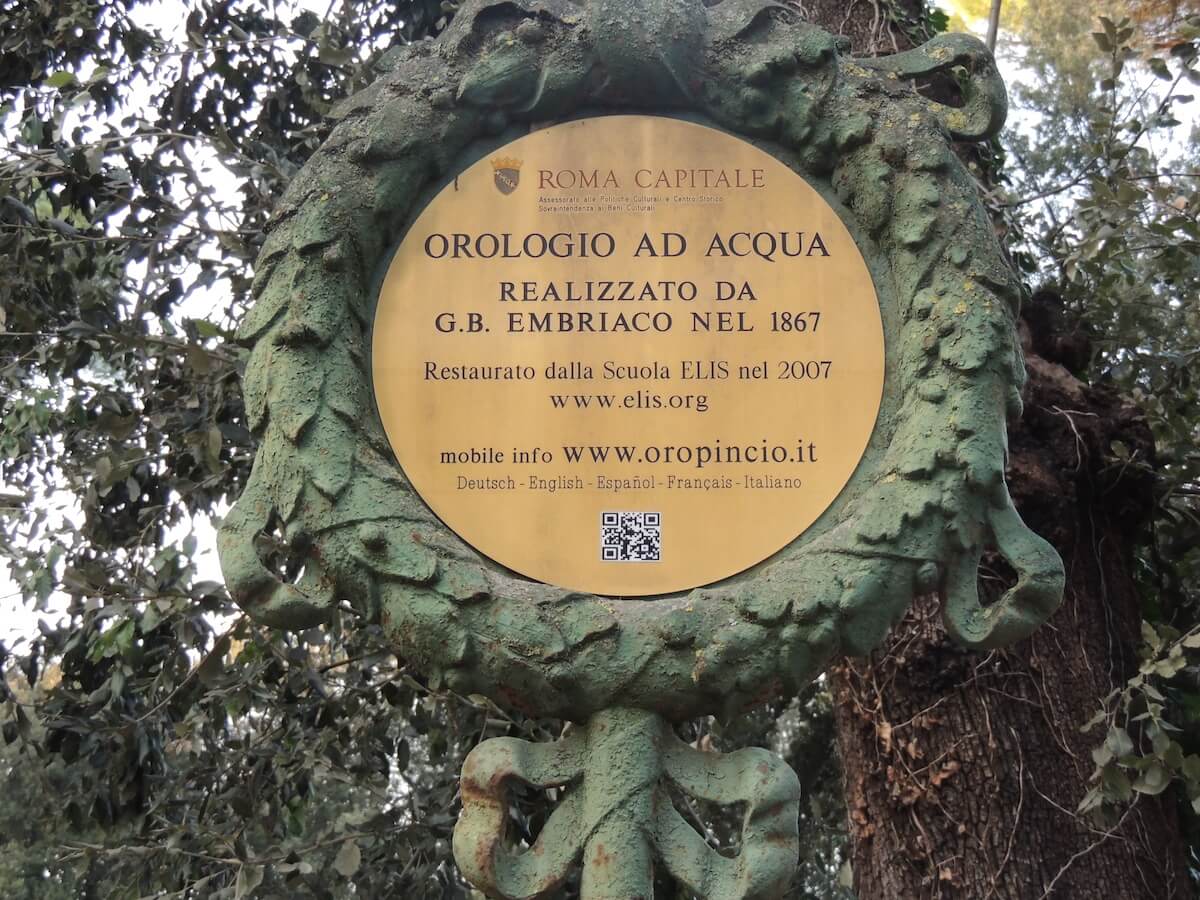 Impressive as Embriaco’s water clock is, we owe the full picturesque effect of the ensemble to the Swiss architect Gioacchino Ersoch, who was tasked with redesigning and enriching the Pincio gardens in the same years that Embriaco was perfecting his water clock. The fantastical fairytale-like setting was his idea, as was the organically inspired 4 metre tall tower enclosing the device.

Buoyed by the success of the Pincio water clock, Embriaco set about designing further hydrochronometers. One graced the courtyard of the Ministry of Finance until the 1960s, at which    point it was lost to history; another, still working today, is situated in the courtyard of the Palazzo Berardi on the Via del Gesù, the centrepiece of an elegant fountain decorated with caryatids and  classical busts. 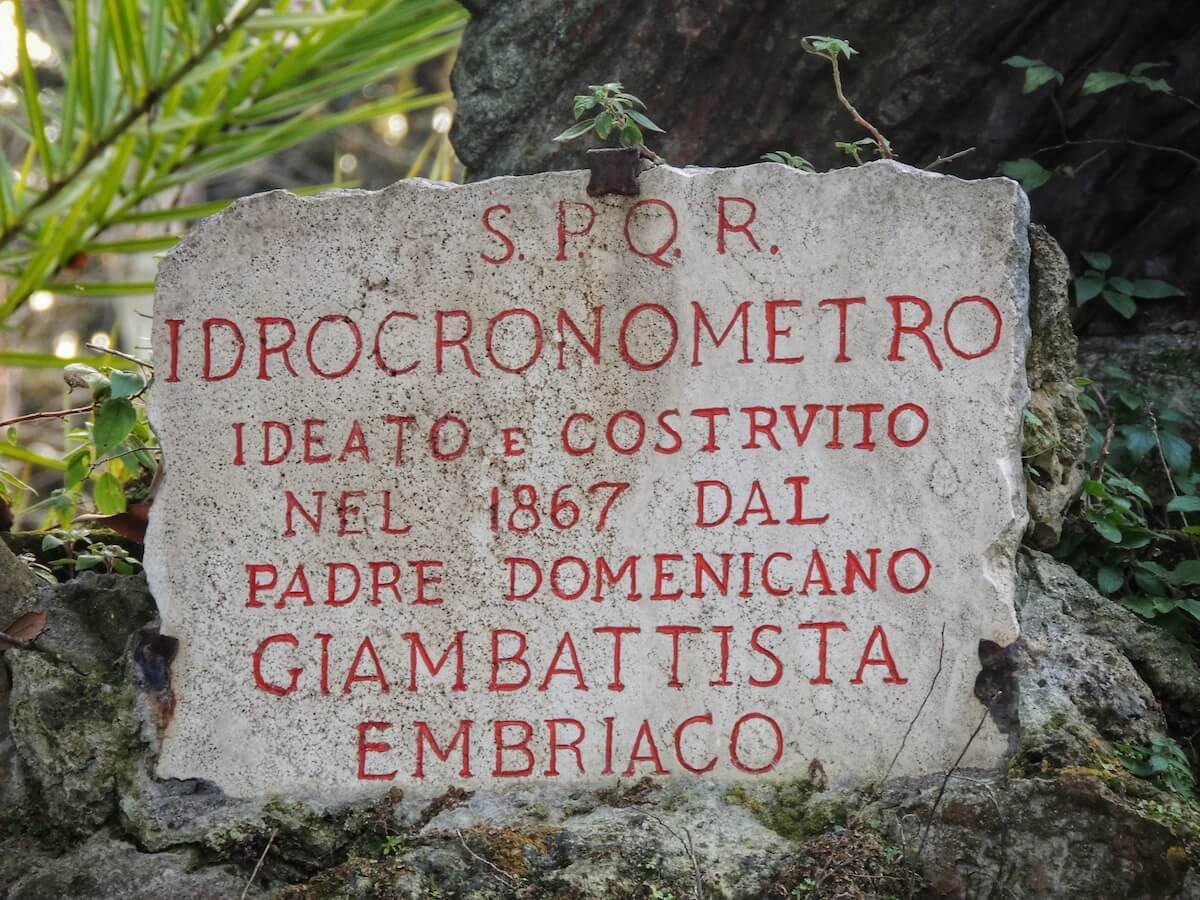 But the fabulous fairytale clock nestled in the gardens of Villa Borghese remains our favourite memory of Father Embriaco, still heroically ticking off the Roman hours and minutes nearly 150 years after its unveiling. Next time you climb up the climb up to the summit of the the Pincian Hill for the most breathtaking view of the spires of Rome, make sure you take a detour and seek out the Friar’s clock!