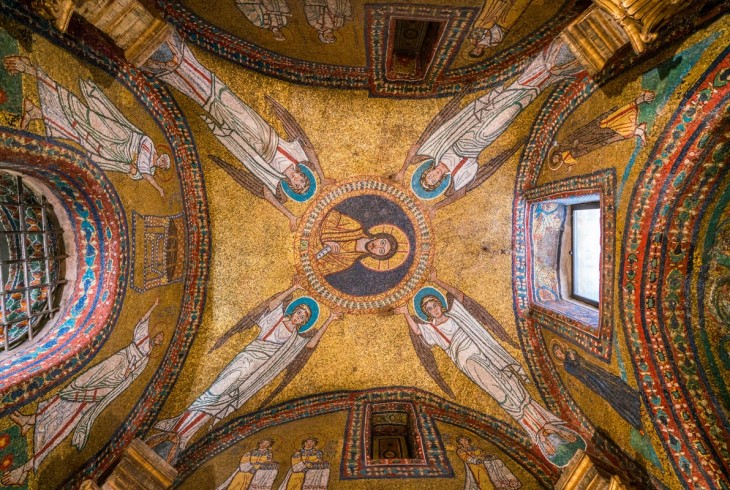 As soon as you pull open Santa Prassede’s heavy wooden doors, you are transported far from the bustle of 21st-century Rome and thrust into the mysterious world of distant Byzantium. Shining majestically in the church’s apse is a massive and incredibly vivid ninth-century mosaic representing the apocalyptic Second Coming of Christ, a great allegory that spreads onto the two triumphal arches that lead into it. Christ stands confidently at the centre amidst the clouds, flanked by Peter and Paul, the patron apostles of Rome.

The bearded disciples have their arms around two young women dressed as Byzantine royalty, laden down with precious gems and gold. These are the saints to whom the church is dedicated, the pious ancient sisters Prassede and Pudenziana, who according to legend went to extraordinary lengths to provide persecuted Christians with decent burials - Peter and Paul are giving them a priceless personal introduction to the Lord of Heaven. All around are beautiful exotic details – the apostles in the form of meaty lambs, a legion of venerably robed Patriarchs, the river Jordan, even little jumbled depictions of Jerusalem and Bethlehem.

The mosaic was commissioned in the early ninth century by Pope Paschal 1st, one of the most important patrons of art and building projects in the city’s long history. When Paschal ascended to the seat of St. Peter Rome’s churches were in a dire state, reeling after a century of hostile sieges by rival powers that saw their relics looted and artistic treasures desecrated. The coronation of Charlemagne as Emperor in a solemn ceremony at St. Peter’s in the year 800 heralded a change of the city’s fortunes, and Paschal took his opportunity to make a lasting mark on a revitalised Rome in the coming years. A wave of expert mosaic artists was fleeing Constantinople (modern day Istanbul), capital of the Byzantine world, after iconoclastic policies decreed that the production of images was anathema to the Eastern Church.

The resurgent Eternal city was ready and waiting to take advantage of their expertise - as part of his ambitious plans for urban renewal, Pope Paschal called on the refugee artists to transform three of Rome’s oldest churches in his image, whilst at the same time recalling the distant splendours of ancient Rome – Santa Cecilia in Trastevere, Santa Maria in Domnica and here, Santa Prassede.

A canny self-publicist, Paschal made sure that his contribution to Rome’s sacred landscape would be recorded for posterity by having himself portrayed amongst the august holy company in the apse – he’s the balding man in a yellow robe under a date palm tree and fluttering phoenix on the left. Humbly offering a model of the renovated basilica to Christ, his head is surrounded by a square blue nimbus instead of the conventional haloes being worn by his companions – this means that he was alive when the work was completed. But Paschal wasn’t content with this massive testament to his patronage - in addition to the apse mosaic, he also commissioned the decorations of the tiny chapel of Saint Zeno leading off from the left aisle of the church. This little room is one of the most spectacular (and least-visited) examples of Byzantine mosaic work in Italy outside of Ravenna, an explosion of gold that dazzles the eyes and the senses.

Discover our -> VIP Vatican In a Day Tour: Experience Art and History As Never Before

A Funerary Chapel Fit for the Pope’s Mother 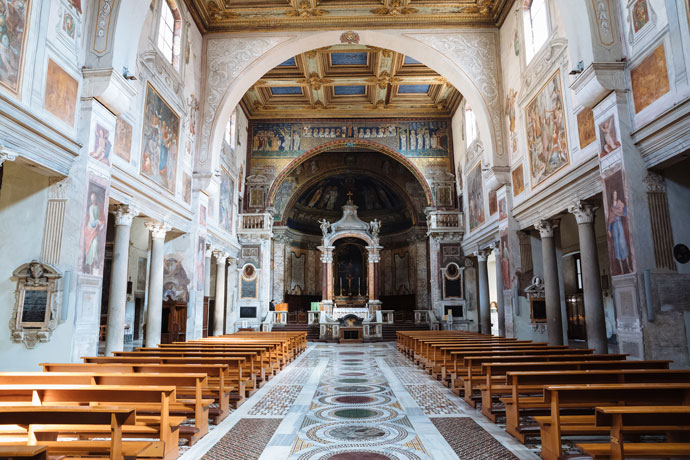 If the apse mosaic was the product of political ambition, Zeno’s chapel owes its existence to a far more personal motivation: Paschal had it built as a sumptuous funerary chapel for his beloved mother Theodora. Before you enter the tiny chapel, the entrance portal made up of reused bits of ancient buildings offers a clue as to the sparkling masterpieces within. Surrounding the white marble doorway flanked by black granite columns are two mosaic covered arches featuring vivid little portraits – on the outer ring is Christ and his apostles, whilst the inner ring features the Virgin Mary accompanied by elaborately adorned women (probably church martyrs) in the guise of Byzantine princesses wearing crowns and jewellery and bedecked all in gold. These holy figures frame the chapel’s raison d’être – the urn containing the remains of Theodora herself. Over the door a Latin inscription tells you exactly what to expect inside the chapel, lauding ‘the beautiful work of the prelate Paschal, gleaming as a divine dwelling.’

Drop a euro into the slot to turn on the lights, step over the threshold, and realise that the inscription was no empty boast. Glittering across every surface in shining mosaic tiles of gold are images from the Bible, of Christ and of early Christian saints. These little pieces of gold-covered glass are known as tesserae, and were deliberately set into the walls and ceiling at slightly different angles from one another so that they could catch and refract light individually, creating uniquely dazzling shimmering effects. On the four corners of the ceiling four beautiful winged angels appear to be illusionistically standing on the four columns set in each corner of the room, and together they support a roundel out of which Christ stares impassively downwards. The combination of 3-D trickery, peerless artistry and pure gaudy bling is impossible to describe – you have to see it for yourself.

Glance over at the chapel’s left-hand wall, where saint Agnes, Prassede and Pudenziana appear again dressed as Byzantine princesses, tripping over a stylised flowery meadow with offerings in their hands. Look out for the strange image in the arch below showing the Lamb of God straddling the four rivers of paradise from which a group of deer slakes their thirst, whilst to the side Christ forces open the doors of hell to free Adam and Eve in an audacious holy jailbreak. Lower on the wall Prassede and Pudenziana appear one final time, in the company of the Virgin Mary and a woman wearing a square blue halo much like Pope Paschal in the apse. The likeness is more than a coincidence: an inscription confirms this is the woman of the hour, Theodora herself, and her square nimbus means that she had the privilege of seeing the with her own eyes the finished chapel built in her honour by her son.

Before you leave, take a look at the mosaic above the entrance doorway. Here saint Peter and Paul stand on either side of the colourfully decorated arch, each standing on little meadows covered in charming red and yellow flowers. The apostles gesture towards an empty throne decorated with a purple cushion and a cross – this ensemble is a common Byzantine motif known as the Hetoimasia  - Christ’s throne in heaven is empty, awaiting his imminent return as Lord in the Second Coming, bringing the imagery of the chapel into line with the church’s apse mosaic – there the waiting is finally over, Christ has returned and his throne will be occupied once again.

Saint Zeno’s chapel is unique in Rome, offering both a crash course into the culture and iconography of the Byzantine world and an amazing insight into exactly how mosaics were created. Usually you can’t get anywhere near the mosaics that adorn the apses and triumphal arches high up on the walls of medieval churches, but such is the diminutive scale of the chapel that here you can even see the distinctive glitter of each individual tile working together to offer the viewer a spectacular window into heaven itself. Next time you’re in Rome take a small detour from Termini station and experience one of the most exciting and little-visited art treasures in the whole city.

Visit Santa Prassede and the Chapel of San Zeno every day from 08.00-12.00, and 16.00-18.00. Beware of masses when visiting on Sundays. Entrance is free, but if you want to illuminate the mosaics in the Chapel it costs €1 to turn on the lights for 5 minutes.