Ancient Horse-Tamers: The Dioscuri on the Quirinal Hill 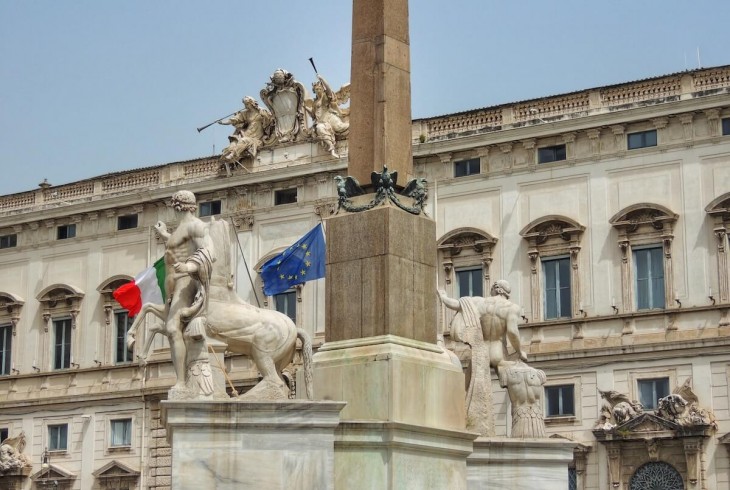 Make the climb up Rome’s Quirinal Hill to sweeping Piazza del Quirinale, and you’ll be greeted with one of the finest panoramas in all the city. On one side of the square the view takes in a glittering array of rooftops and domes extending all the way to St. Peter’s basilica off in the distance (particularly spectacular at sunset), whilst the imposing bulk of the Palazzo del Quirinale, former summer residence of the popes and now home to the President of Italy, dominates the other. But it is the enormous fountain in the centre of the piazza that will really catch your attention. 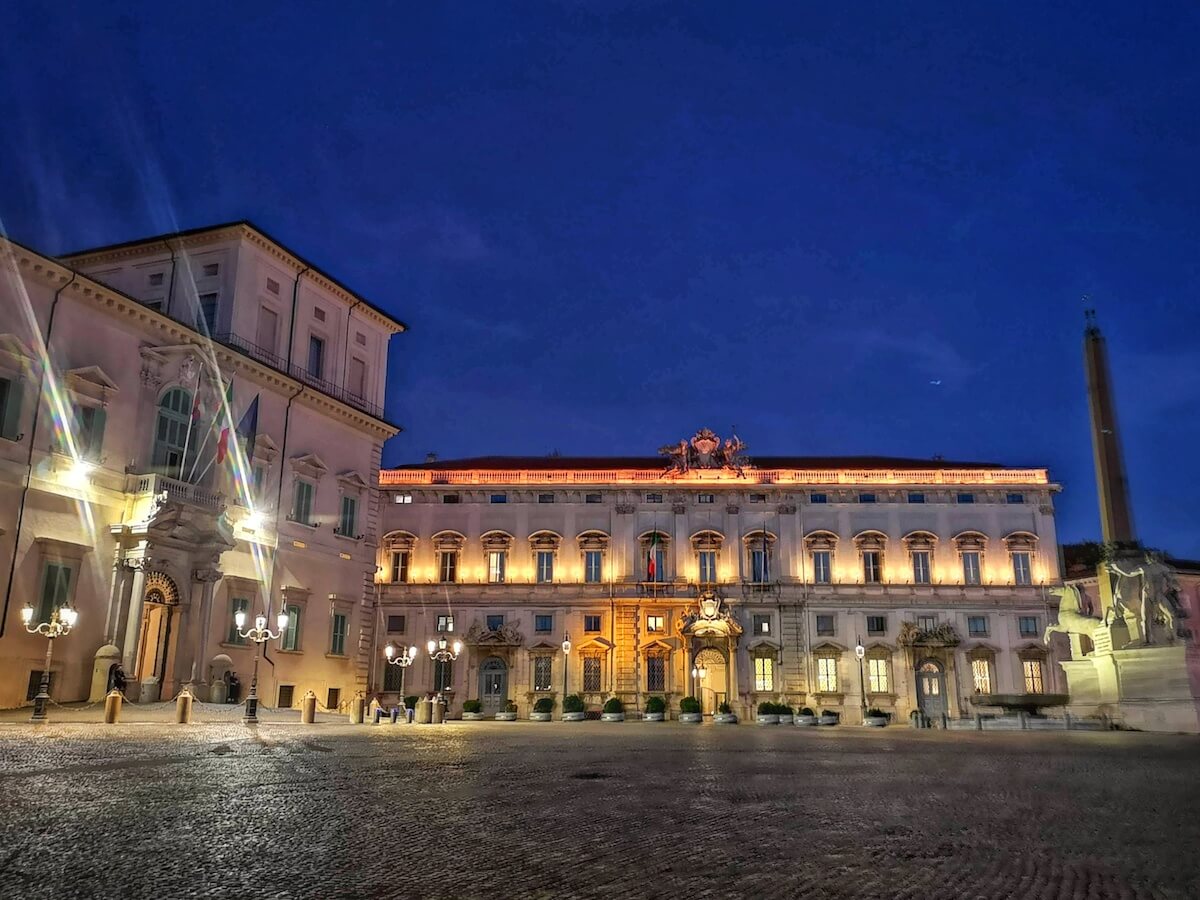 Standing to either side of a soaring ancient Egyptian obelisk, two muscular and naked young men stand tall and proud, each holding a horse dramatically rearing up on its hind legs by the bridle. Further emphasising their nudity, the figures lean against the empty shells of abandoned suits of armour. But who exactly are these handsome young horsemen sculpted in the altogether, and what are they doing in pride of place on the Quirinal Hill? 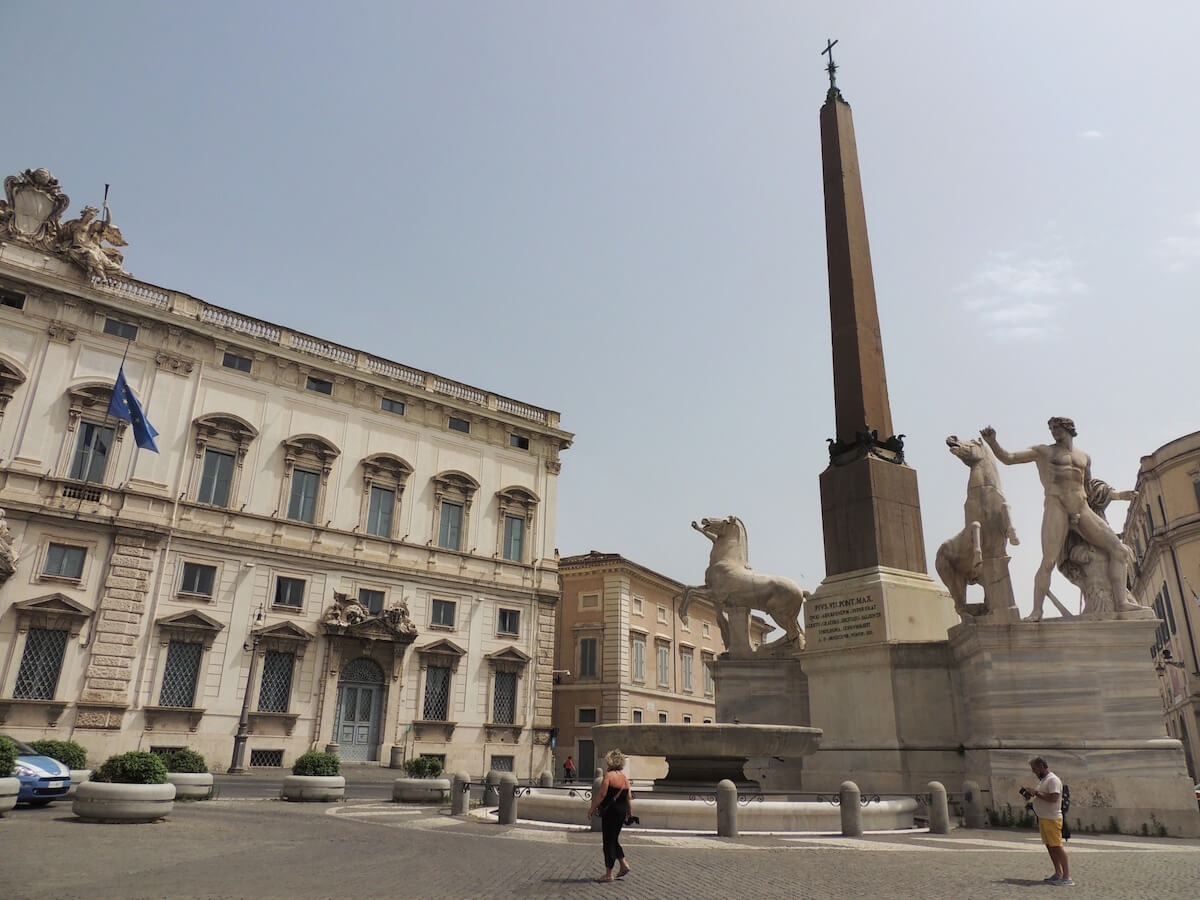 The most plausible identification for the dynamic duo is as the mythical twin half-brothers Castor and Pollux, collectively known in Greek and Roman mythology as the Dioscuri. Castor, a mortal, was born to Leda and Tyndareus, the king of Sparta, parents also to the legendarily beautiful Helen of Troy. The Spartan couple were to endure a rocky home life, however: the beautiful Leda proved irresistible to the irrepressibly horny god Zeus, who descended from Mount Olympus in the guise of a swan to seduce her (pictured below in a drawing by Michelangelo). The product of their bizarre coupling was the divine Pollux, born simultaneously with Castor in a rare act of heteropaternal superfecundation via, according to some ancient sources, the means of a giant egg. 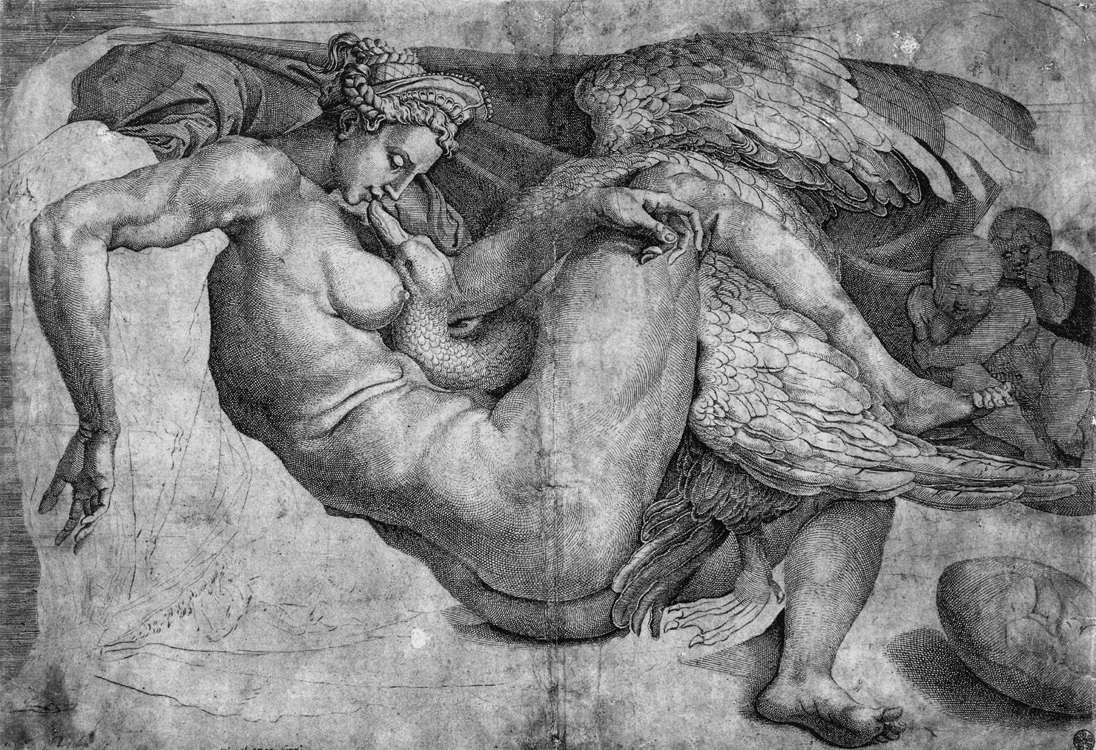 As his mortal brother lay dying after a botched cattle raid many years later, Pollux bestowed upon Castor half of his divinity, ensuring that the heretofore inseparable twins could remain together for all eternity, spending half their time in Hades (land of the dead) and half on Mt. Olympus (home of the gods).

Famed as excellent horsemen and pugilists (Homer describes them as ‘horse breakers and boxers’), Castor and Pollux are almost always depicted in the company of their mounts. In addition to the Quirinal Hill group, the Dioscuri reappear in Rome as guardians of the ramp leading up to the Capitoline hill as designed by Michelangelo (below). But as one of the few ancient sculptural groups never to have been buried or lost to view over the centuries, it is the Quirinal Twins that have exerted the greatest pull over Rome’s artistic imagination. 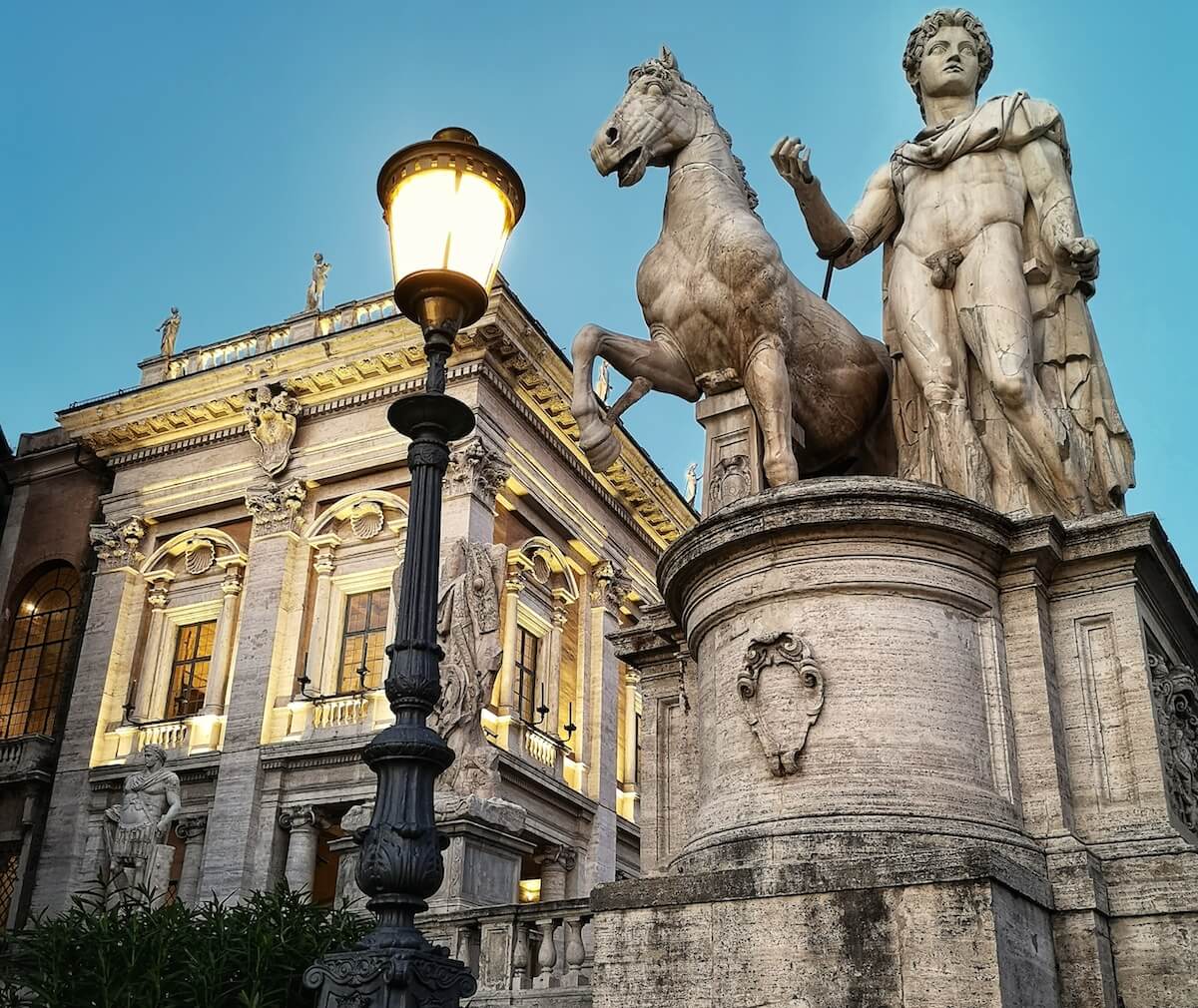 It seems that the monumental horse-tamers date from the 3rd century AD and originally decorated the so-called Temple of Serapis that once stood here in antiquity, before being moved to the Baths of Constantine after a devastating earthquake in 443 AD, located a stone’s-throw away on a site near the current beginning of Via Nazionale. And it was there that they remained for centuries to come, impervious to time even as the ancient baths crumbled around them, giving rise to the area’s traditional nickname - Monte Cavallo, or the Hill of the Horse. 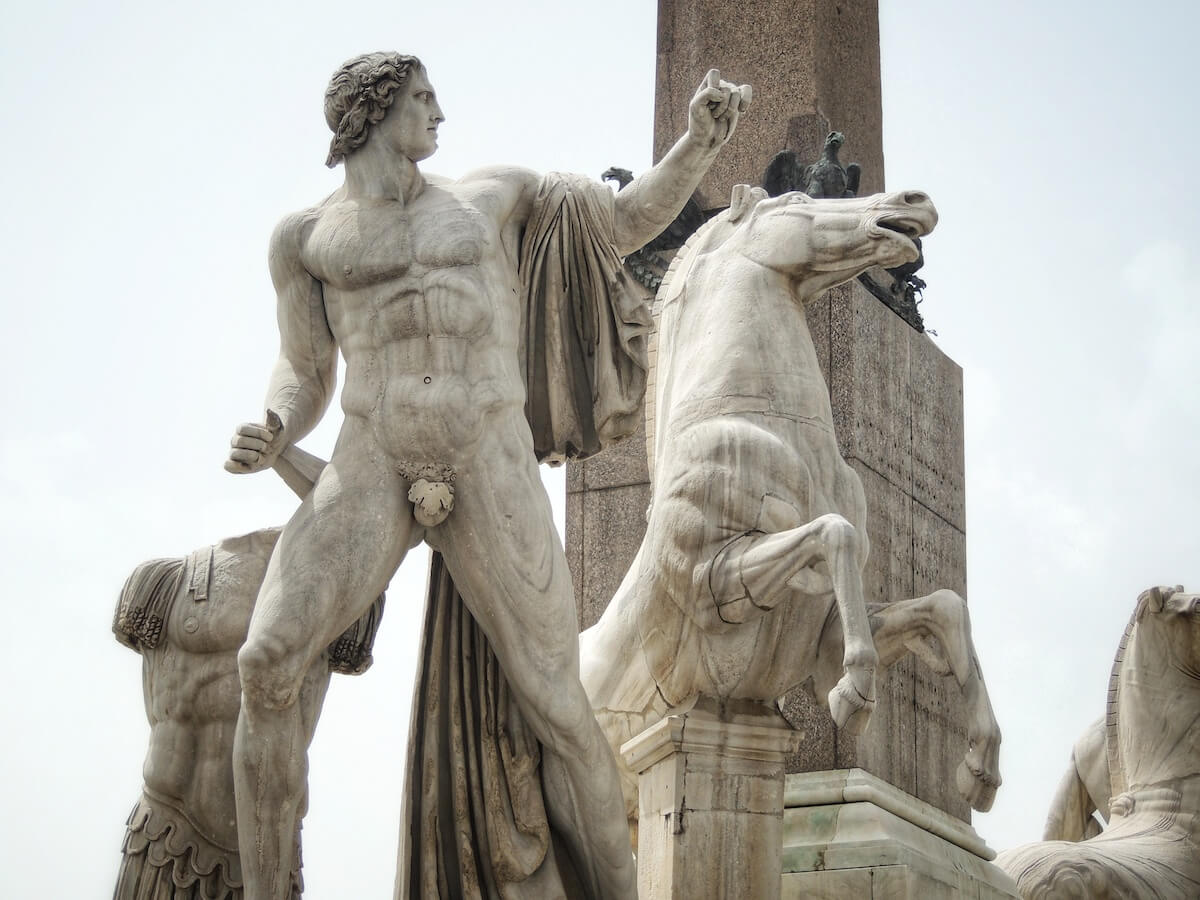 Thanks to their imposing size and fine state of preservation, the Quirinal Dioscuri were amongst the most famous ancient sculptures known to the city in medieval Rome. Their original identification long obscured, however, the handsome youths were no longer recognised as the mythical brothers: instead, it was believed that they represented a pair of nudist Greek philosophers by the names of Praxiteles and Phidias.

The confusion was understandable - these names are carved on the bases of the statues - but instead of the nature-loving philosophers, the inscription refers to the two most famous sculptors of ancient Greece. It seems that their names were inscribed there by an unknown hand in a rather optimistic attempt to associate the works with those great artists of antiquity. 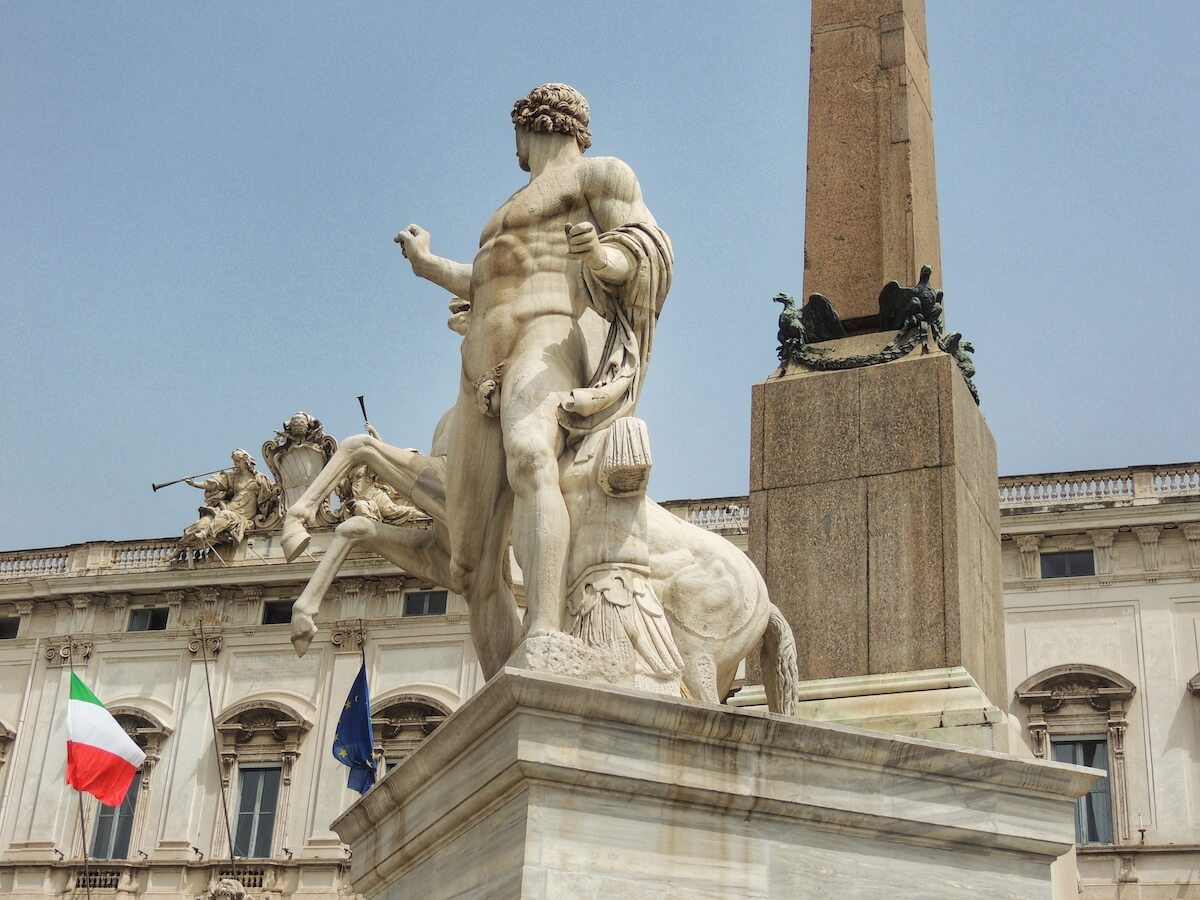 The fascinating medieval guidebook to Rome and compendium of tall-tales known as the Mirabilia Urbis Romae  takes up the story of Praxiteles and Phidias. There we find them explaining to the emperor Tiberius that they refuse to wear clothes as they place no value in the material world, and that in exchange for services rendered to the emperor they would be content with a memorial sculpture erected to their eternal fame rather than money. In the Mirabilia’s inventive if fictitious account Tiberius was happy to oblige, and the rearing horses ‘trampling the earth’ were added to the ensemble to signify the nudist pair’s disdain for terrestrial wealth and power.

As the centuries wore on and tastes changed, so too did the interpretation of this enigmatic duo. In the Renaissance the story of Praxiteles and Phidias fell out of favour, and they were instead widely regarded as a twin portrait of Alexander the Great and his trusty steed Bucephalus (later becoming a double portrait of Alexander with his father Philip of Macedon). By the time that the Quirinal was beginning to be redeveloped in the 18th century however, the twins’ identification as the mythical horse-tamers Castor and Pollux had been more or less widely established.

And what of their current siting at the foot of the obelisk? This we owe to the interventions of two popes known for their enthusiasm for urban redevelopment. Sixtus V ordered the sculptures restored in the 1580s, placing them on their high pedestals and installing a fountain basin between them. Pius VI rearranged the square again in the 18th century, carting one of the fallen obelisks that once adorned the Mausoleum of Augustus across town and re-erecting it at the centre of the Dioscuri group. And so they remain, still dominating one of the largest and most impressive squares in the Eternal City. 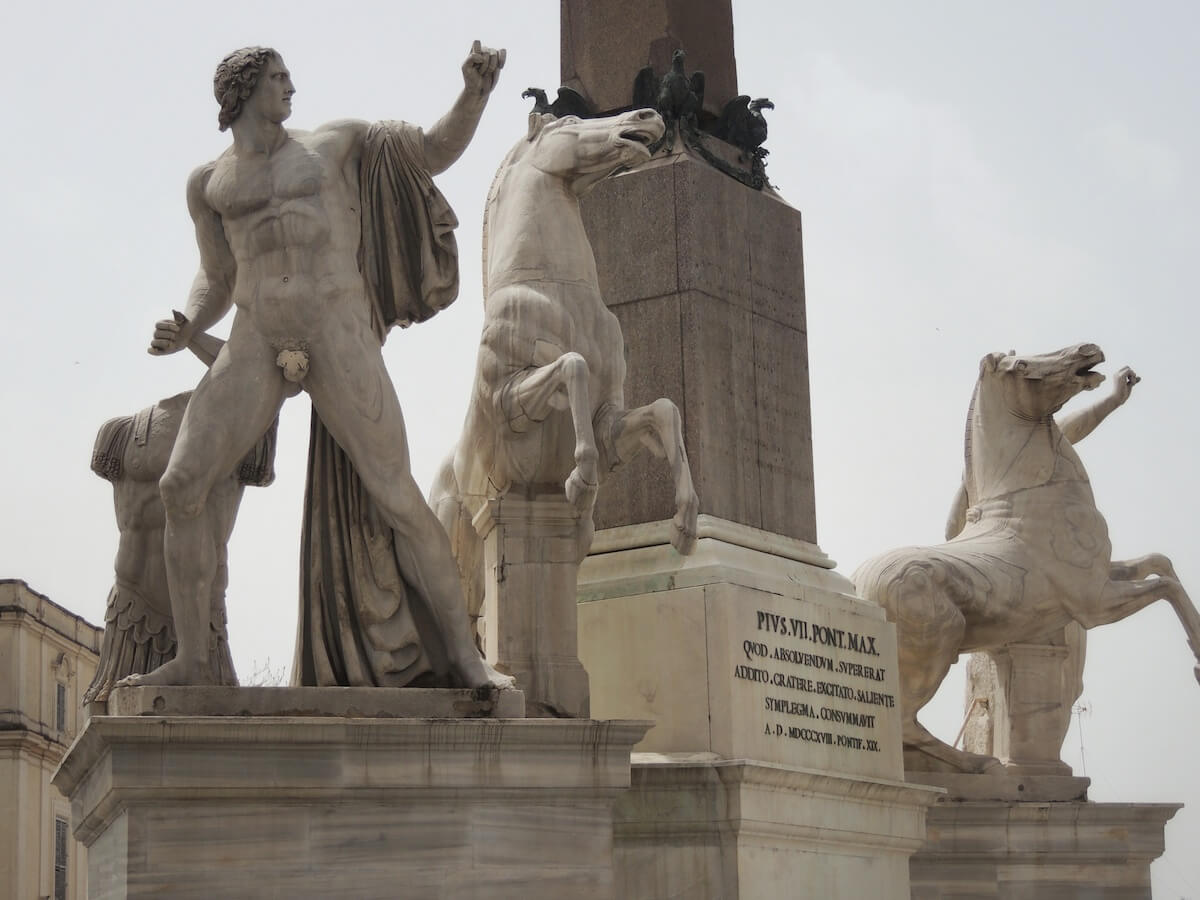 If you’d like to learn more about the history and sites of the Quirinal Hill and why it needs to be on your next Rome tour, then be sure to check out the latest edition of our Travel Destinations series over on Youtube!