Going Underground in Rome: unexpected beauty below some churches 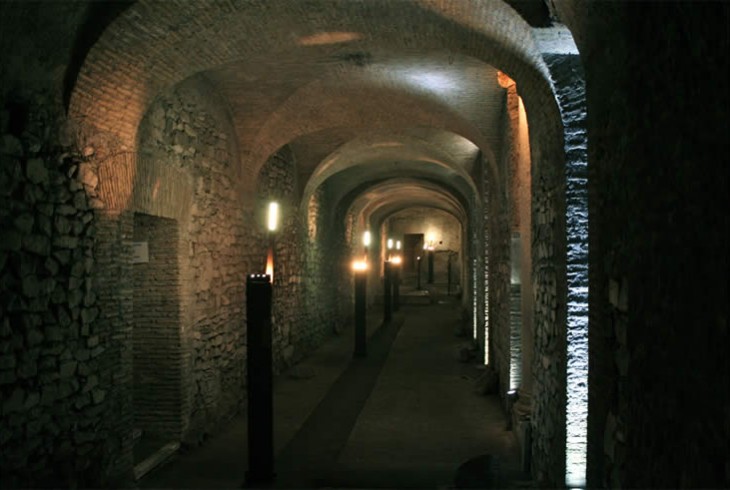 Walking through the streets of the city is the best way to get a sense of modern day Rome, but if you want to understand the ancient city, you’ll have to go underground. Beneath the streets of Rome are underground rivers, quarries, temples, and countless bodies - one of the many reasons why it’s such a challenge to expand the city’s metro service. Every time they dig underground, they inevitably stumble across something new. Or rather, something very, very old.

To get a glimpse of the subterranean city, I joined an Underground Rome tour. This small group tour focuses on the secrets hidden beneath some of Rome’s oldest churches, and gives a fascinating insight into the lives of the ancient Romans.

Romans have always been very pragmatic when it comes to constructing new buildings, borrowing material from other buildings, and even building directly above an older structure. San Clemente, the first stop on the Underground Rome tour, is the perfect example of Roman architectural ingenuity, and arguably the most fascinating church in the city.

Located just down the road from the Colosseum, the basilica of San Clemente is an early twelfth century church with some baroque revisions. The columns are an example of spolia (“spoils”) - the architectural practice of borrowing stone from a pre-existing building and incorporating it into a new building. This explains why, on closer inspection, the columns of San Clemente all look slightly different. The tiles of the mosaic floor also come from a staggering variety of sources, including far-flung locations in Africa and Asia.

What makes San Clemente so unusual is that it is built over the remains of not one but two layers of pre-existing buildings. Go downstairs and you’ll discover the vast underground ruins of a fourth century church, decorated with vivid frescoes. One wall depicts the story of the martyr Saint Clement, the fourth pope of Rome, and one of the miracles associated with him. There was apparently once a church devoted to the saint in the Black Sea, which was only accessible once a year. A young boy miscalculated the tides while visiting the church, and disappeared. He was assumed drowned until he emerged safe and sound the following year. The fresco portrays the joyful reunion between mother and child, surrounded by the sea.

The underground ruins of San Clemente also include an atmospheric mithraeum. Once a rival religion to Christianity, mithraism was practised in underground temples throughout Rome. Mithras was believed to have been born on the 25th of December, his mother a virgin; these are just some of the intriguing parallels with Christianity. Because Mithras was born in a cave, his followers chose to worship underground. A Roman house beneath San Clemente was briefly converted into a mithraeum, giving the followers of Mithras a place to worship in private. On your San Clemente tour you’ll see an evocative altar with a sculpture depicting the key event in Mithraism - Mithras slaying the bull, in an act that symbolises the triumph of good over evil.

On the nearby Caelian Hill, another church sits on top of another labyrinth of ruins. Beneath the fourth century Santi Giovanni e Paolo are the well-preserved remains of some Roman houses. In this stone maze you’ll even see the original Roman road that once divided the buildings, making it feel as though you’re exploring an underground city.

One of the buildings would have been a third century insula - a Roman apartment block with shops on the ground floor and residential apartments on the upper levels - while another was a domus belonging to a wealthy owner. The colourful frescoes, which depict astrological symbols, vines and the four seasons, give an impression of luxury and well-being. According to legend, Saint John and Saint Paul once lived here, until they were executed during the reign of Julian the Apostate, and subsequently buried in their own house. Despite the pagan imagery in the frescoes, the inhabitants of this beautifully decorated house may well have been Christian, as early Christian art frequently borrowed pagan imagery, such as plants and mythological figures.

After a walk across the Circus Maximus and the area once known as the Forum Boarium - the cattle market of ancient Rome - the underground tour concludes at San Nicola in Carcere. This sixth century church was built on top of the ruins of three pagan temples. But even before descending underground, you’ll see traces of the site’s ancient history. The columns built into the facade of the sixth century church are remnants of the earlier temples, and some of them even date back to to the third century BC.

Walking back and forth between these Republican underground temples - one dedicated to Speres (the god of hope), one to Juno (the protector of the state and goddess of marriage and childbirth), and one to Janus (the god of beginnings, gates and time) - is a unique experience. These dark tunnels would have once been streets in the open air, bustling with people and market stalls. This was the site of the Forum Holitorium, a busy vegetable market squeezed between the temples.

Before you return to San Nicola in Carcere, make sure you explore the underground chambers thoroughly. In an easily missed alcove you’ll make a morbid discovery - the bones of some monks, some scattered on the ground, others piled up neatly on a shelf in the wall.