A Fragmented Beauty: The Ponte Rotto and Rome's Romantic Past 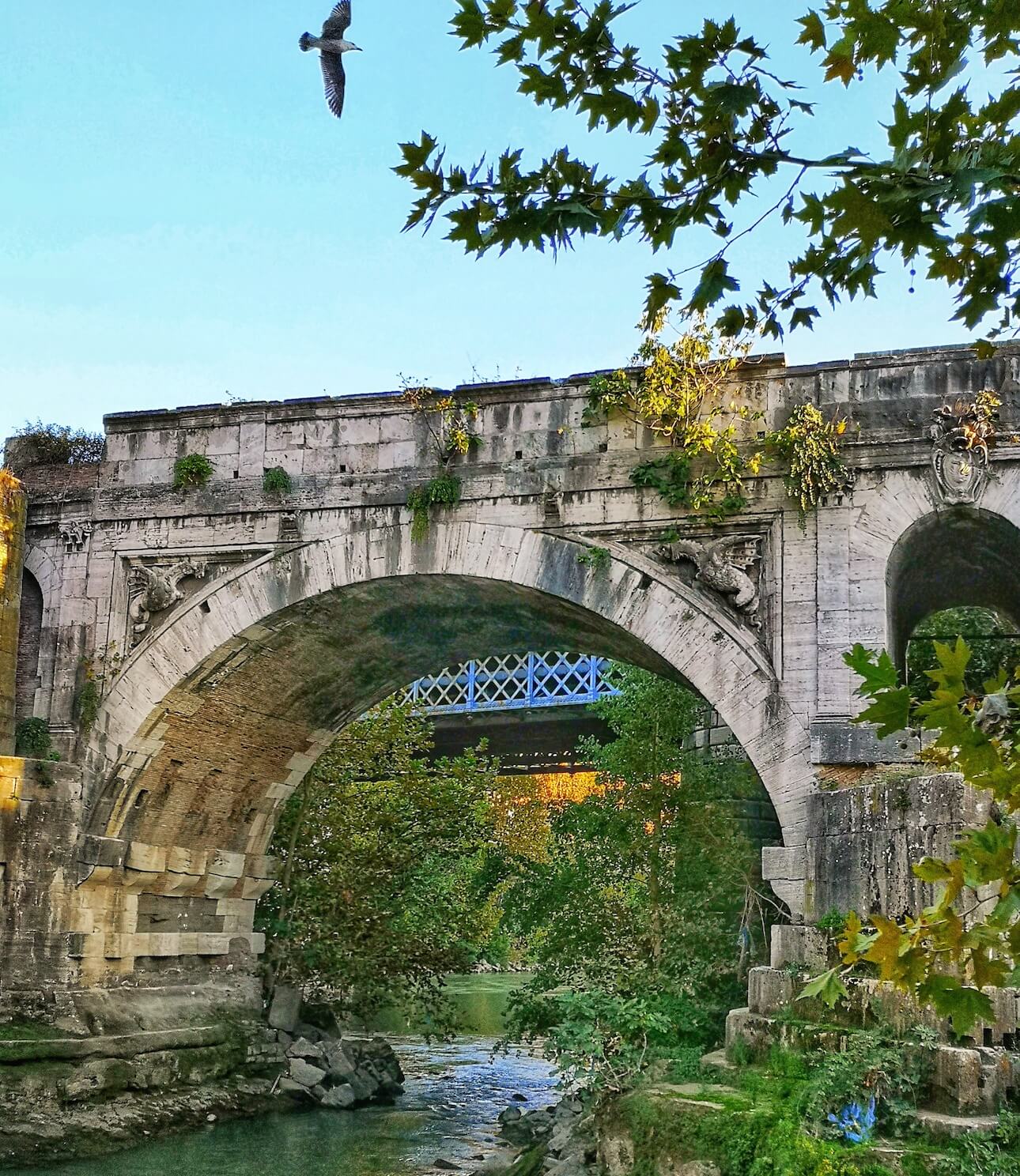 It stands there with obvious pride, cast off from the passage of time and the city around it like some great glacial erratic deposited into an urban wilderness far from the lands of its birth. This is all that remains of the ancient Pons Aemilius, the oldest of the many impressive hunks of masonry that span the Tiber's course.

You can tell a lot about a city from its bridges. Like the joints and sinews of the human body, it is through its streets and bridges that a city is given the freedom to move. The momentous decision to replace the wooden bridge that crossed the river here at one of its most important points with a stone version in the 2nd century B.C. was a clear sign of the city's rising star and increasing wealth. The ambitious undertaking took 35 years to complete and, though a triumph of ancient engineering, it has endured a troubled history. Like the city's population, the Pons Aemilius found itself powerless to withstand the devastating floods to which Rome was so frequently subjected, and the bridge's long catalogue of damage and repair reads like a history of the city in microcosm.

After centuries of perilous existence, its fortunes seemed to be on the upswing in 1552 when the bridge was completely overhauled to the designs of none other than Michelangelo. But even his divinity was unable to tame the fury of mother nature, and a few years later the bridge was badly damaged by the flood-waters once more. The death-knell, however, came 40 years later, on Christmas Eve 1598. 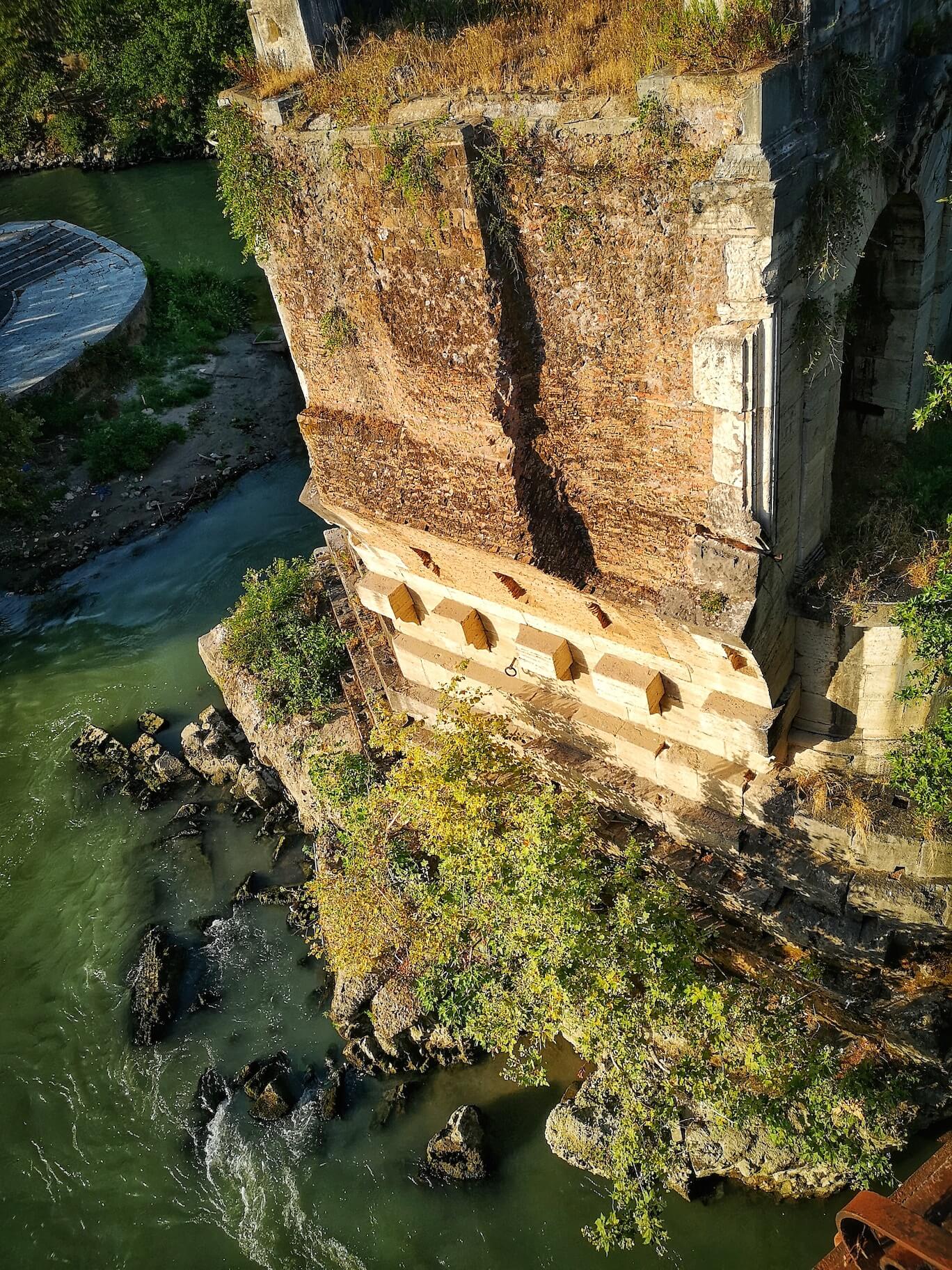 It was then that the worst flood in Rome's history thundered down on the city with apocalyptic vengeance, with the waters reaching even as far as Piazza di Spagna. When they receded they apparently left behind a stricken fishing boat that had been carried along in their wake, a legend commemorated by Pietro Bernini's beautiful fountain at the foot of the steps, the Barcaccia.. In any case the relentless rush of the waters proved too much for the old bridge, and an entire half of the giant superstructure was carried away in the Biblical torrent. At a stroke it became the archetypal bridge to nowhere, jutting out uselessly over the river that had for so long tormented it. Its  remains were gradually transformed into an elevated garden, an oasis of flowers and plants suspended over the rushing waters below.

Stripped of its function, the Pons Aemilius became the Ponte Rotto, the broken bridge. It quickly acquired a cult status amongst visitors to Rome, its magnificently picturesque fragmentation a godsend for the writers and artists busy formulating the ideals of the Romantic movement. Anyone who was anyone included it in their compositions, and William Turner left behind a series of sketches from his visit to the city in 1819.

In 1853, Pope Pio XI finally tackled the issue of the broken bridge. He had his engineers attach an iron extension from its abandoned edge to the other side, linking the banks once more. This ingenious solution was, however, to prove the final downfall of the erstwhile structure. The much ravaged stone of the remaining section was too weak to bear the strain of its new iron armature, and became dangerously unstable. In 1887 the extension was taken down and the construction of a completely new bridge finally got under way, necessitating the demolition of the Ponte Rotto's surviving half. Nature has a way of linking us to our history, however - a sole central arch managed survive the destruction.

Today it still exists as a blasted fragment conjuring up the image of a past that never existed, a seductive no-place of the imagination. When I first came to Rome I was left awestruck by this massive relic, and whenever I pass it I still have to resist a powerful urge to attempt a death-defying leap onto the old bridge, which sits only a few metres from the new Ponte Palatino. I dream of exploring its vegetation, of uncovering its secrets, out of reach and yet tantalisingly near, much like the past itself. On that bridge, I am convinced, there exists another world, far from the rigid efficiencies of its modern replacement.

Spindly saplings somehow survive in the gushing waters breaking on its ancient foundations. The pristine travertine stone has in places been eroded away, revealing the long thin Roman bricks that are the real heroes of classical engineering. A family of pigeons roost in the undergrowth that has colonised its top. Oblivious to the deafening waters and the din of the traffic all round it, it seems like a harbinger of the world to come, a sneak preview of how the cities of men will look when nature takes them over once more. An elegy to a distant past, but also a warning of the fleeting existence of civilisation.

Rome is full of these tiny details - half-hidden fragments, impossibly beautiful elegies to a city and people long since extinct. Windows into the past and lessons for the future. In the cracked and broken stones of the Ponte Rotto, the Romantic ideal of Rome lives on.