Religious relics in Rome: from the Holy Cross to the Holy Staircase 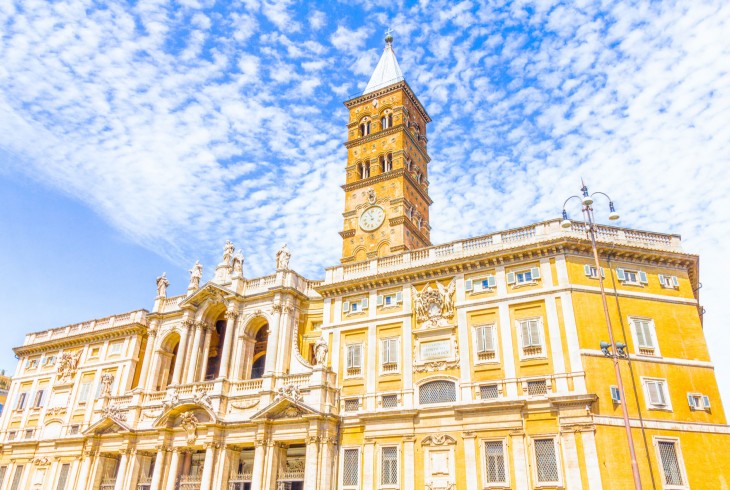 Each year millions of people make their way to Rome to explore some of the worlds most famous landmarks and tourist attractions.

Rome is of course known for its ancient history, culture and structures, as well as the headquarters to the Roman Catholic Church. With this, comes many religious relics that have also made their way to Rome over the centuries.

A relic can be anything ranging from body parts of saints, remains of the ‘True Cross’ or even a thorn or nail used in the crucifixion of Christ. Most notably of course is the Holy Grail. A religious relic that man has been in search of for centuries. Some believe the Holy Grail to be a cup, used by Jesus at the Last Supper and it’s said to possess miraculous powers. Although the Holy Grail has never been found, you certainly won’t be disappointed with your search for relics in Rome.

These relics were important to the Catholic Church in the middle ages, as pilgrims would travel thousands of miles to see them, just to be close to them and in many cases want to die near them, as they felt this would bring them closer to God. Not much has changed over the centuries and you could almost say that pilgrims were the original tourists in Rome.

Over the years relics have been bought, sold, stolen and even forged, which has resulted in their authenticity often being disputed, but whats for certain is that their appeal hasn’t died away.

So I decided to set out on my own exploration and discover some of the most famous relics still in Rome today.

I started my tour at St. Peters Basilica, visiting the Vatican Scavi, also known as the Vatican Necropolis, where you can find the tomb of St. Peter. After descending down a staircase into the humidified tombs below the Basilica, we wound our way through small tunnels and walkways before coming to the final resting place of St Peter.

The tomb is situated directly below the altar deep below the Basilica. This religious relic could well be one of the more famous ones in Rome. Not only is it believed to be the tomb of Peter who was one of the Twelve Apostles of Jesus Christ, but you can also see the remains of bones, which they believe to have belonged to the Saint himself. *Please note if you would like to visit the excavations of the Vatican Scavi, be sure to book well in advance as its quite hard to get tickets. Also I wouldn’t really recommend if you suffer from claustrophobia. Some parts can be quite tight and its very humid.

My second stop was to ‘San Giovanni in Laterano’ and the ‘Sancta Santorum’.

The church ‘San Giovanni in Laterano’ is very famous in its own right, as the primary Basilica of the Catholic Church before St. Peter’s Basilica was built and as such contains several of the holiest and most interesting religious relics. These include the heads of both St. Peter and Paul, as well as the ‘Holy Umbilical Cord’, plus situated above the sacramental altar, there is a fragment of the table on which Jesus consumed the last supper.

Then across the street from the San Giovanni In Laterano cathedral, is an unassuming, small, chapel like structure housing the Scala Santa.

The Scala Santa or the “Holy Staircase” as otherwise known, consists of 28 steps of Tyrian marble that legend holds were the actual stairs of Pontius Pilate’s mansion, which Jesus was made to walk on his knees, carrying the cross on his way to trial during the events known as the Passion.

However the stairs are now incased in wood to protect them from the many people who like to also follow in Christ’s footsteps and walk the steps on their knees.

Today, many fragments of wood are claimed as ‘True Cross’ relics, but in most cases it is hard to establish their authenticity.

Situated not to far away is Santa Croce in Gerusalemme. This Basilica houses the most relics from the Passion of Christ, also brought to Rome by St Helena on her quest to the Holy Land. Among them, 2 thorns believed to be from Jesus’s crown, ‘Titulus Crucis’ the inscribed tablet that hung over Jesus during his crucifixion, as well as the remains of a rusted nail and three small wooden pieces of the True Cross.

A much larger piece of the True Cross was taken from Santa Croce in 1629 and is now kept in St. Peter’s Basilica.

Another interesting relic you will find here is ‘The Finger of St Thomas’. In the Bible, ‘Doubting’ Thomas was unable to accept the resurrection of Christ, even though he stood there before him. So Christ allowed Thomas the Apostle to put his finger inside the wound, made in his side by a Roman soldier’s lance. The finger which is kept inside a glass case looks more like a piece of bone than a finger, but interesting all the same. And if you are coming to Rome to see these sites, it’s certainly worth a look.

Another worthy mention would be St. Maria Maggiore, this Basilica which is situated just a few minutes walk from Termini Central Station houses the relics of the Holy Crib. Shard wood remains from the Holy Manger kept inside a crystal reliquary below the high altar.

Or you may want to visit ‘Basilica of Saint Paul Outside the Walls’. In this Basilica you will find the tomb of Saint Paul as well as a set of chains said to be the prison chains of St. Peter. In the fifth century, Juvenal, the bishop of Jerusalem, gave the chains that possibly held St. Peter while he was imprisoned in Jerusalem to Eudoxia’s mother who sent them to her daughter in Rome. Eudoxia then gave the chains as a present to Pope Leo I, who placed them in this church, together with the chains that had held St. Peter while he was in the Mamertine prison in Rome.

On my final quest to learn about these religious relics, I travelled 50km’s outside of Rome to a little village on a cliff face called Calcata. This village once contained maybe the strangest of all the relics. The Holy Prepuce, or simply put ‘The Holy Foreskin’. Believed to have been preserved from the circumcision of Christ. The Holy Prepuce was kept inside a jewel encrusted reliquary and was believed to hold great powers. The only information I could find out was that the Holy Prepuce was stolen in the early 1980’s and has never been seen since. But all was not lost, as the drive to the village itself was beautiful and the scenery once you are in the town is spectacular. There are no cars in this village and its only accessible by foot. In fact this town was abandoned in the 1930’s as fear grew that the volcanic cliffs may collapse. Then by the 1960’s the historical centre began to be repopulated by artists and hippies who squatted in its medieval stone and masonry structures. Many of the squatters eventually purchased their homes and the residents of what had become an artistic community began restoring the ancient town.

However Calcata isn’t the only town to have claimed to have possessed the Holy Prepuce, at various points in history, a number of churches in Europe have claimed to possess it, sometimes at the same time.

Although there are many other relics in Rome to see, I guess there is one more relic that deserves a mention, although not located in Rome itself, its The Holy Shroud of Turlin. Situated in north Italy. is believed to be the burial cloth of Christ. When photographed in 1979 the negative revealed a more detailed image imprint of a body, which some see as beyond the capacities of medieval forgers. Overall, I find all these religious relics fascinating. Whether they are the real deal or not. People are still flocking to see them, just like the thousands of pilgrims did before them.