7 Places to Get Spooked in Rome this Halloween 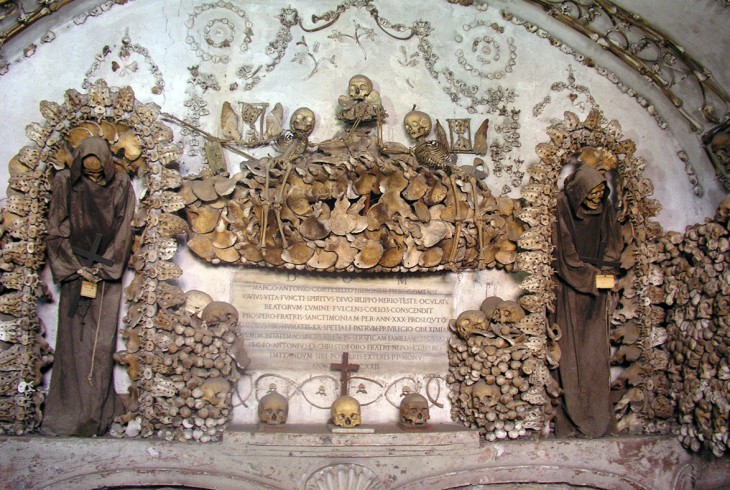 It’s that time of year again. The evenings are drawing in, a chill is beginning to spike the evening air, and all-around trees are donning spectacular Technicolor coats of orange, yellow and gold. All this can only mean one thing: Halloween is fast approaching. If you fancy a fright to ring in the year’s spookiest season, then check out some of Rome’s most disquieting corners with us. The Eternal City has been going strong for over 2,700 years now, and there’s plenty of mystery lurking around every corner. From eerie crypts stuffed to the gills with skeletons to bizarre museums and abandoned mental hospitals, Rome can get seriously creepy if you know where to look. Read on to discover it with us!

When it comes to crypts, an air of eerie unease sort of comes with the territory. But the underground ossuary the Capuchin friars have carefully curated for centuries beneath their church of Santa Maria della Concezione on Via Veneto takes things to a whole new level. As you pass the crypt’s dread threshold, an inscription gives you an idea of what’s to come: ‘That which you are, we once were; that which we are you shall be.’ As soon as you enter the crypt’s main passage, you’ll see what they meant: every inch of the walls and ceilings are decorated with human bones arranged into artworks and patterns of dazzling complexity. The mortal remains of over 4,000 Capuchin friars are down here, stripped of their earthly trappings. Beautiful and grotesque at the same time, the crypt posits death as the great leveller – everyone has to face the reaper sooner or later. The Capuchin crypt’s bizarre homage to death is Rome at its most macabrely fascinating – if you visit just one spooky site this Halloween, make sure this is it. 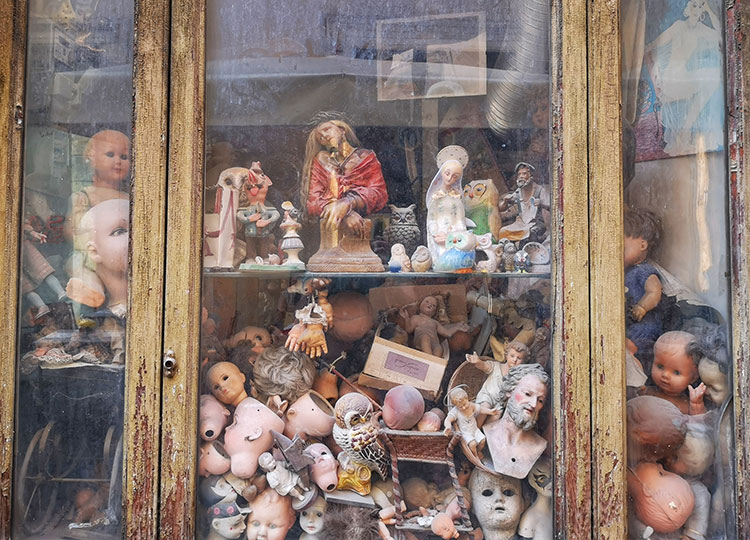 There’s no way around it: dolls are creepy even at the best of times. Decapitate them, tear their limbs off, disembody them, and we’re rapidly entering Stephen King territory. Devote a ‘hospital’ to restoring their mangled remains to full health and we’ve gone through the looking glass completely. But that’s precisely what goes on at the Ospedale delle Bambole, one of the most disquieting traditional artisan workshops in the Eternal City. Hidden around a corner just steps away from Piazza del Popolo, a quick peek through the window at the dusty array of uncanny limbs and faces will be enough to set your Halloween pulse racing. According to neuroscientists, dolls weird us out for good reason. Humans are obsessed with faces: it’s how we understand the world around us, and how we learn to distinguish between animate and inanimate objects. When we see a face, in other words, we are programmed to see the brain behind it. Dolls, though, exist in a grey area between the two categories – they have all the right features to tell us we’re in the presence of another human, but we know (or do we?) that they are inanimate – it’s this uncanny doubling that has made the doll a perfect tool for generations of horror movie directors looking for a cheap fright, and that makes an encounter at Rome’s doll hospital seriously creepy.

3. The Museum of Purgatory

As the millennia-long centre of the Catholic world, it should come as no surprise that the Eternal City is home to some of the more eccentric manifestations of religious ritual out there. Right at the top of this particular list has to be the bizarre Museum of Purgatory, housed in the sacristy of the equally weird little neo-gothic church of Sacro Cuore del Suffragio on the banks of the Tiber (a kind of Milan’s Duomo in miniature). The church was the brainchild of a Catholic missionary from Marseilles in the 1890s, one Victor Jouët. Jouët was obsessed with the sufferings of souls in Purgatory, whom he imagined living out years of torment in recompense for their earthly imperfections. One day during mass in 1897 the church caught fire, and to the priest’s amazement a face appeared to him in the flames licking against its altar. For Jouët it was a clear sign that the fire-consumed souls of purgatory were seeking to communicate with the land of the living, and he dedicated the remainder of his life searching for more signs and artefacts that would prove his theory. The results of his quest are deposited here, in Rome’s weirdest museum – eerie photographs and flame-blasted garments, scorched books featuring the immortalised fingerprints of their damned readers – traces of the dead, in other words, seeking to get us to pray for them to free them from their purgatorial torment. Whether you buy the premise or not, the eclectic collection of haunted artefacts provides a perfect diversion for your Halloween wanderings. 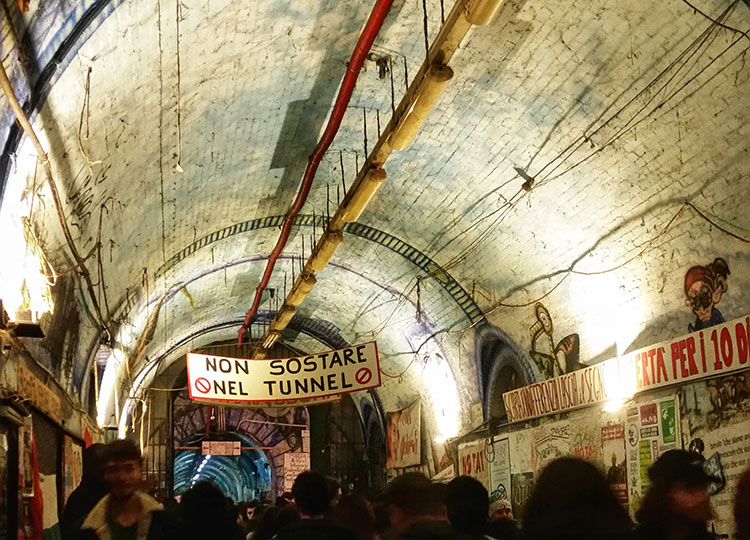 If you’re looking for an atmospheric place to dance the night away on Halloween, then you need to head to Forte Prenestino in Rome’s eastern outskirts. A massive 19th-century fort, the abandoned site has been occupied for over 30 years now by a progressive collective that hosts music events, art shows and community outreach projects within its imposing defensive walls. The parties hosted here are amongst Rome’s coolest; a warren of tunnels, creepy underground cells and even stretches of woodland growing here and there amongst the sprawling fortifications make for a mysterious and suggestive atmosphere – especially when the spirits are roaming abroad on Halloween. 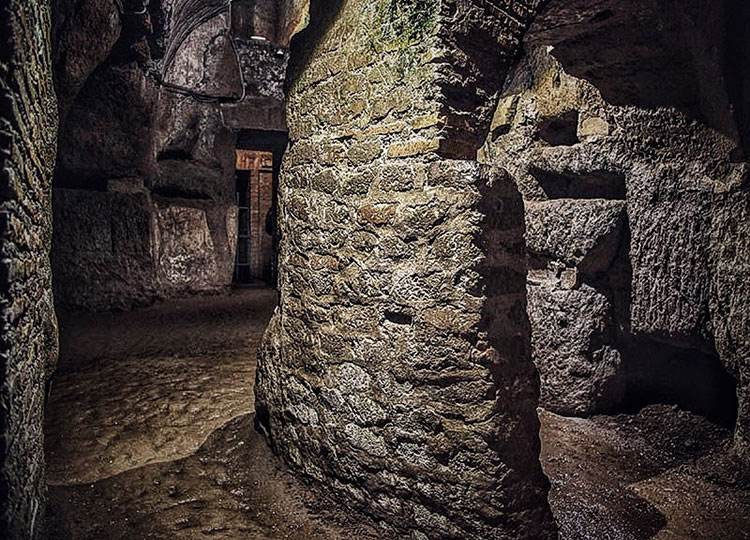 5. The Catacombs of Santa Domitilla

Concealed deep within the bedrock of the Roman countryside, a vast underground city of the dead lies dormant awaiting discovery. The remarkably well-preserved catacombs of Domitilla provide a fascinating window into the distant world of antiquity: carved out of the soft tufa rock, layer upon layer of labyrinthine tunnels stacked from floor to ceiling with narrow niches contain an inexhaustible supply of ancient Christian bones, macabre reminders of Rome’s role as cradle of Christianity in the Imperial Roman world. Small rooms or cubicoli open out from the maze to reveal the final resting places of families rich enough to enjoy the peace of private sepulchres. Navigating your way through the eerie maze with only dim lights illuminating the spooky way down towards the centre of the earth is a seriously atmospheric experience. When the catacombs were rediscovered in the 16th century by one Antonio Bosio, the man known as the ‘Columbus of the Catacombs’ for his intrepid spirit spent 3 days down here wandering the tunnels in the pitch dark. If you join Through Eternity’s Underground Rome tour you’ll hopefully avoid Bosio’s fate – but expect a fright or two along the way.

Where: Catacombs of Domitilla, Via delle Sette Chiese, 282. 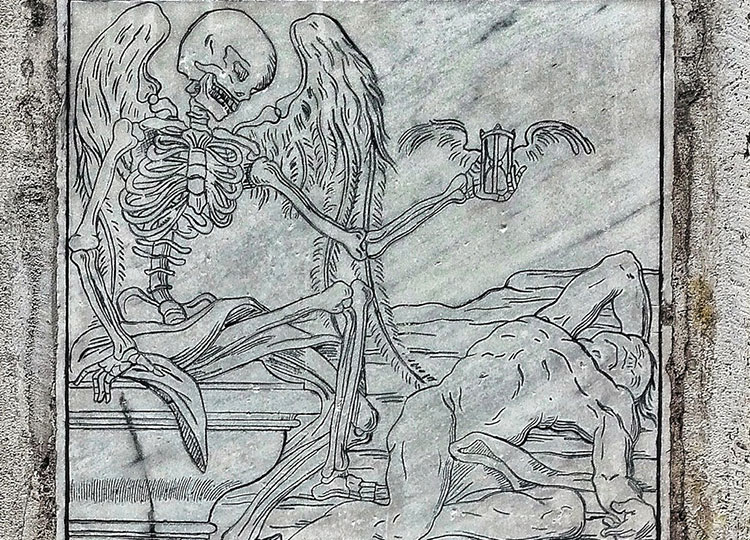 6. The Church and Crypt of Santa Maria dell'Orazione e Morte

The second crypt on our list, the subterranean space beneath the church of Santa Maria dell'Orazione e Morte on picture-perfect Via Giulia doubles as a temple to death every bit as disquieting as the Capuchin’s bone-vault on Via Veneto. The church was founded in 1576 by a lay confraternity whose mission was to provide Rome’s legions of abandoned corpses with a decent burial. The confraternity built a vast cemetery extending over the banks of the river and deep underground as part of their new church to house the bodies they collected. Macabre little plaques doubling as poor boxes posted to each side of the church’s entrance let you know what you’re in for: the Grim Reaper gleefully clutches his scythe and an hourglass as he looms over a naked corpse, leaving you with little choice but to drop a coin in to allow the charity to continue its mission. Make your way through the church (decorated everywhere with memento mori carvings of skulls and skeletons) and down to the crypt, and the macabre-factor jumps more than a few notches. Like the Capuchins across town, the members of the confraternity also saw fit to transform the corpses in their care into artworks: a little altar is topped with a large cross made entirely from skulls, whilst dim light is provided from above by a chandelier fashioned from curving human vertebrae. Rows of skulls set into the wall meanwhile provide a bizarre visual catalogue of death through the centuries – inscribed onto the craniums of some of the defunct are names, dates and details of their deaths.

Note: At time of writing the church and crypt are closed for restoration work, but it’s still worth stopping by to admire the macabre plaques and sculptural detailing on the façade. Check Rome’s 060608 website for updates on opening hours.

7. The Laboratory of the Mind

We’ve had crypts and catacombs, abandoned forts, dismembered dolls and eerie signs of the tortured undead. All that remains to seek out in Rome is one final horror movie staple – a former mental hospital. From Gotham City’s Arkham Asylum to the mysterious facility where Leonardo DiCaprio starts to question his own sanity on Shutter Island, mental hospitals (and the unspeakable things that we suspect go on there) seem to have the innate capacity to scare the bejesus out of us. Of course, it’s not something to be taken lightly - the horrific treatment meted out to those suffering from mental and psychological ailments in the recent past is one of the darkest chapters of modern healthcare. Located on the grounds of the former mental asylum of Santa Maria della Pietà in Rome’s western outskirts, the Laboratory of the Mind faithfully preserves the stark interiors of the defunct institution and the troubled memories of its former occupants. Sinister corridors and bare cells, treatment rooms still furnished with sinister apparatuses and machines that seem to aim closer to torture than to cure, touching personal effects that remind of the humanity of all-too-easily dehumanised patients: visiting the Laboratory of the Mind museum is sure to send a shiver down even the most resolute of spines. Both extremely creepy and immensely thought-provoking, the museum’s fascinating insights into the evolving nature of our understanding of mental health and its treatment, and its attempts to simulate the sensorial effects of mental illness through immersive multimedia displays provide far more than cheap Halloween thrills and spills - definitely worth a visit.