Memories of the Philosopher Emperor: The Equestrian Monument of Marcus Aurelius on the Capitoline Hill 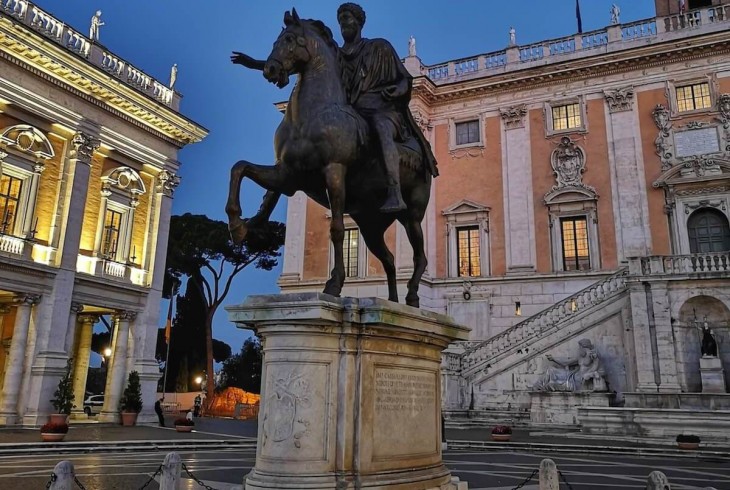 Whatever this is that I am, it is flesh and a little spirit and an intelligence.

Towering over Rome’s Capitoline Hill, historic civic centre of the Eternal City, Marcus Aurelius sits astride his horse, gesturing towards the city below. Perhaps no other artwork as vividly captures the grandeur of Rome, or links its ancient legacy to the present day as evocatively as this massive equestrian monument to antiquity’s great philosopher emperor. But who was Marcus Aurelius, and what is he doing in pride of place atop the most important hill in Rome?

Who was Marcus Aurelius? 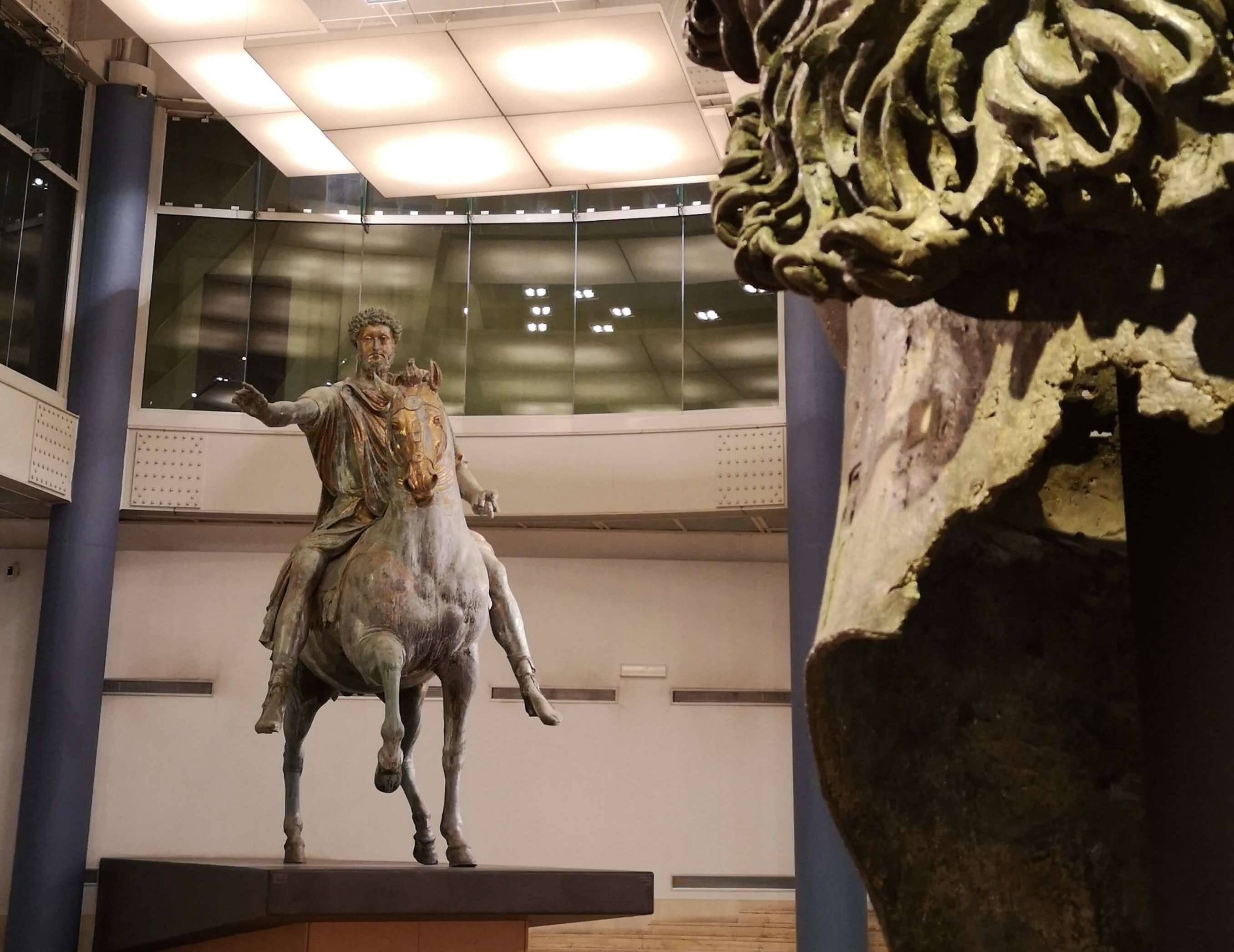 Known to both history and contemporaries simply as ‘the philosopher’, Marcus Aurelius ruled Rome between 161 to 180 AD. Nephew and adopted heir of Antinous Pius, as the last of the so-called ‘good emperors’ Marcus Aurelius presided over the empire during the final years of the Pax Romana, an unusually stable period of Roman history. Peaceful, however, it was not. During his 20 year reign the Roman legions were in constant action, fighting Parthians and Armenians in the east as well as the German tribes of the north. Plague, meanwhile, carried off up to 10 million souls across the empire. Nonetheless, Aurelius was a popular emperor, known for his commitment to justice and moderation.

Despite his bellicose activities, Marcus remained devoted to the vita contemplativa throughout his life. Skilled in oratory and well-versed in Greek philosophy, the emperor was much influenced by the writings of Epictetus, and sought to apply his teachings to the tasks of Imperial governance. Over the course of his many military campaigns, the emperor wrote a highly influential work of philosophy and self-analysis known as the Meditations. Rationality, clear-mindedness and eschewing excessive emotions were all guiding principles of his stoic philosophy. 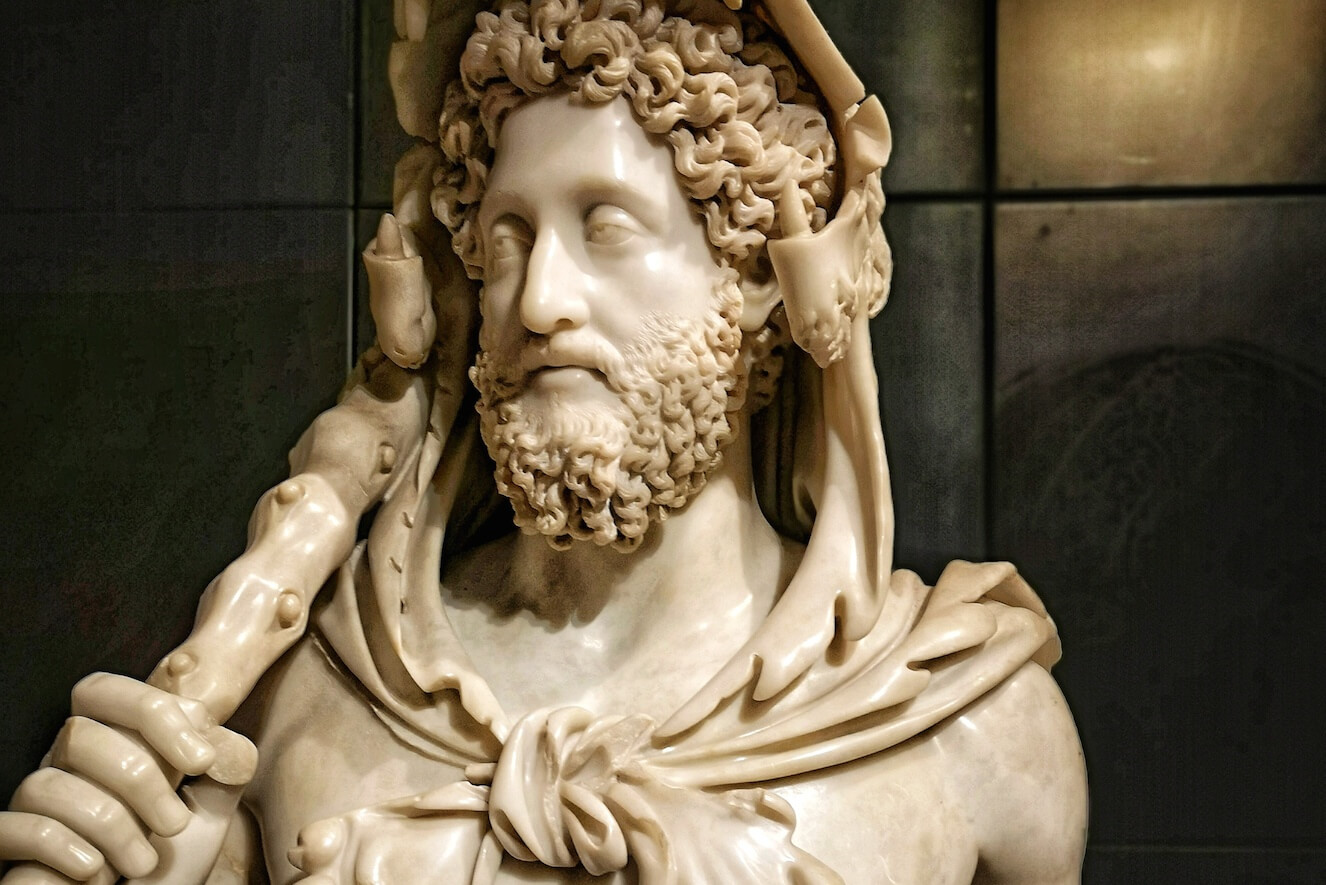 Portrait of Commodus in the Guise of Hercules, Capitoline Museums

Ironically, the ideals of restraint and moderation so dear to the emperor were to have little impact on the behaviour of his successors; his son Commodus’ reputation for capriciousness, narcissism and self-indulgence has made him one of the great stage-villians of Roman history, while excess and bloody intrigue was to be the order of the day in Imperial circles for generations to come.

When was the sculpture created, and why? 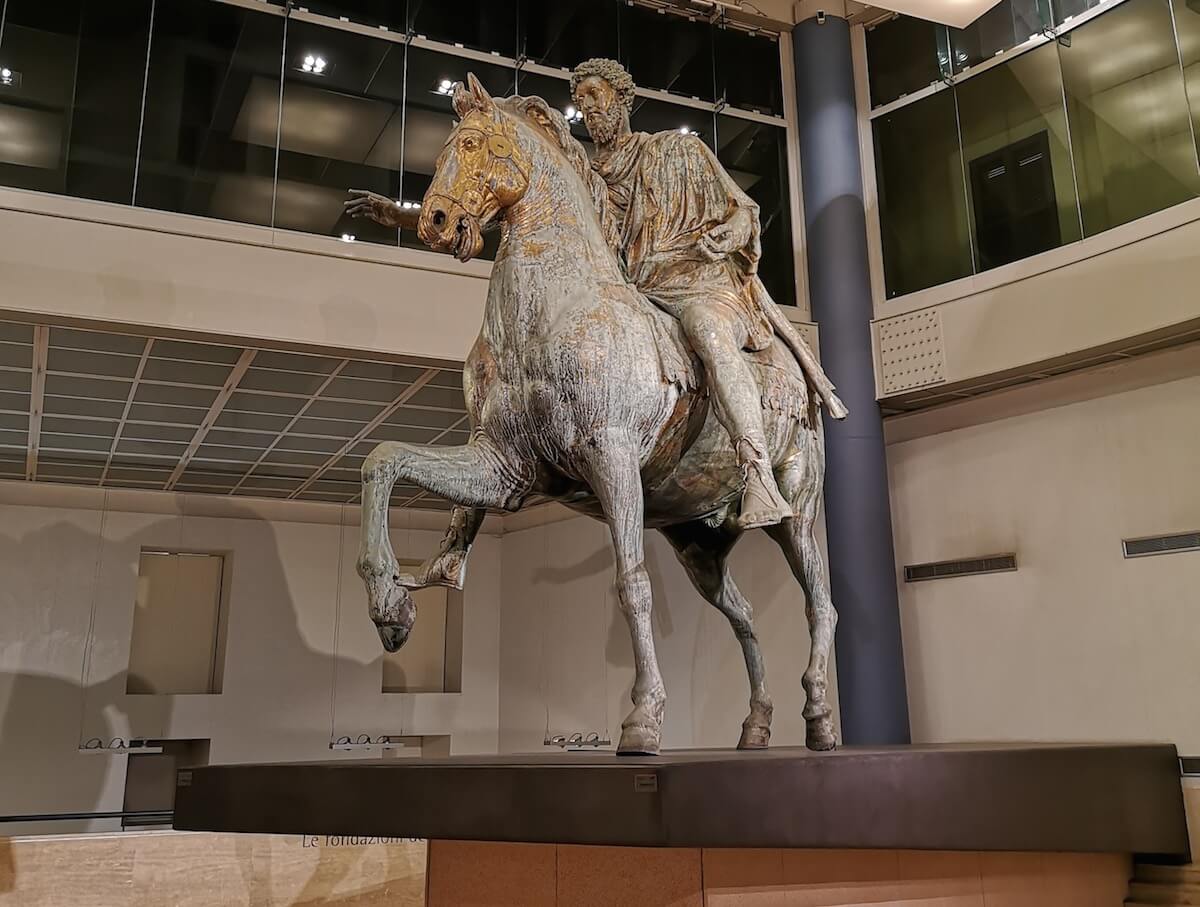 Little is known of the early history of the equestrian statue of Marcus Aurelius, and it is not mentioned in ancient sources. It is however likely that the monument was erected in 176 A.D. to commemorate the emperor’s long-awaited triumph over the German tribes. Standing over 4 metres tall, the massive bronze was created using the ‘lost-wax’ method of casting. Due to the enormous size of the finished piece, both the seated emperor and his trusty steed were cast in multiple pieces before being soldered together.

It is easy to see why the equestrian monument to Marcus Aurelius is widely considered one of the great masterpieces of ancient art. The powerful horse has been captured in mid-movement, his right leg raised, taut muscles rippling beneath the skin. With his flaring nostrils and mouth opened to reveal a fine set of gnashers, the horse seems to pulse with the dynamism of real life. 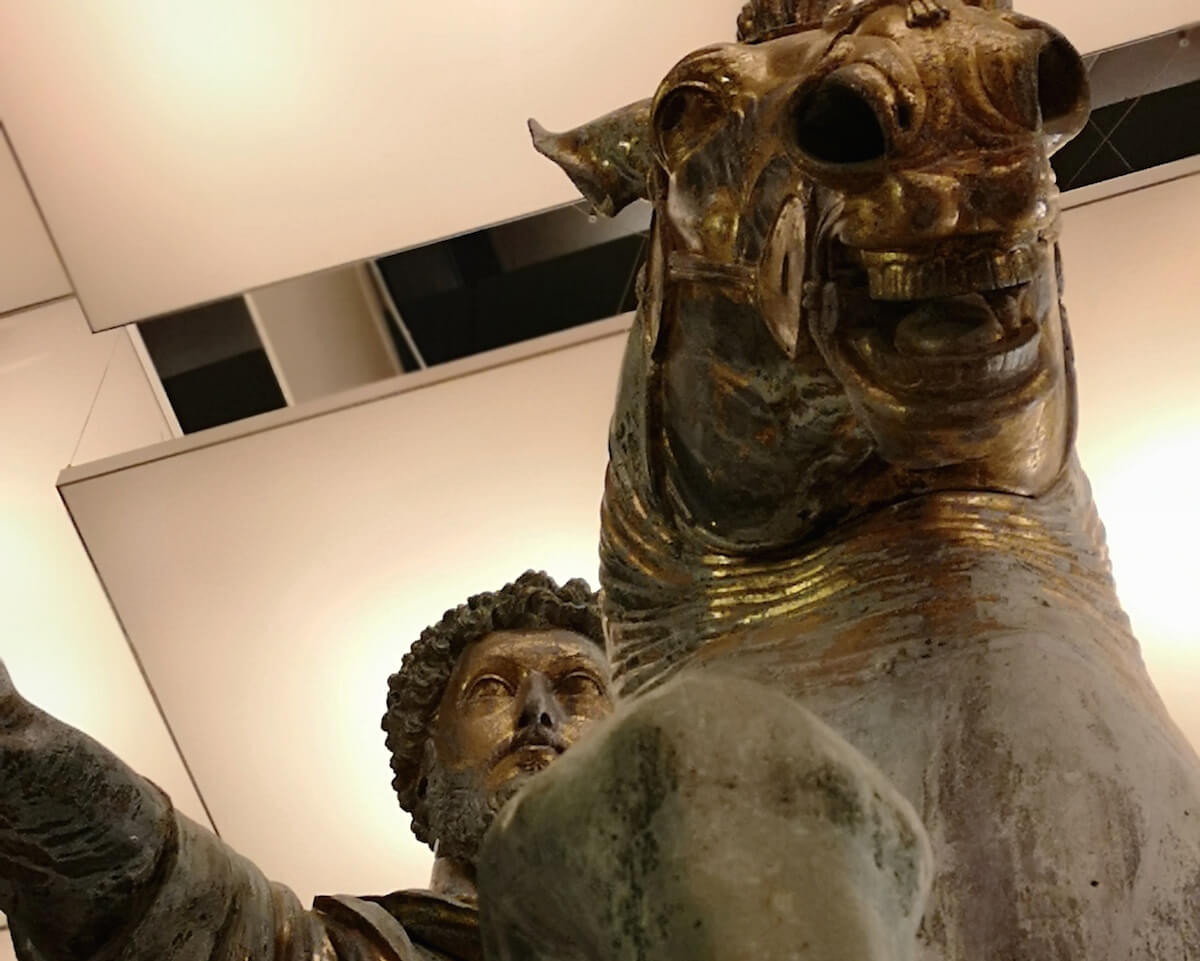 The bearded Marcus meanwhile is every inch the measured and stoic philosopher of reputation, right arm raised in calm acknowledgement of an invisible crowd (or, according to some historians, in mercy towards the supplications of a vanquished opponent). Note that the emperor rides without stirrups, which had yet to make their way to the West, and look out for the emperor’s natty footwear - known as calcei patricii, these sandals were the preserve of the senatorial classes.

Honouring emperors with a larger-than-life-size equestrian monument was a common part of legacy-building in antiquity. Ancient sources record at least 22 such sculptures, known as equi magni or ‘great horses’ in Rome during late antiquity. Amongst others, Diocletian and Constantine were so-honoured in the Roman Forum, while Trajan and Julius Caesar had theirs in the fora that carry their names. 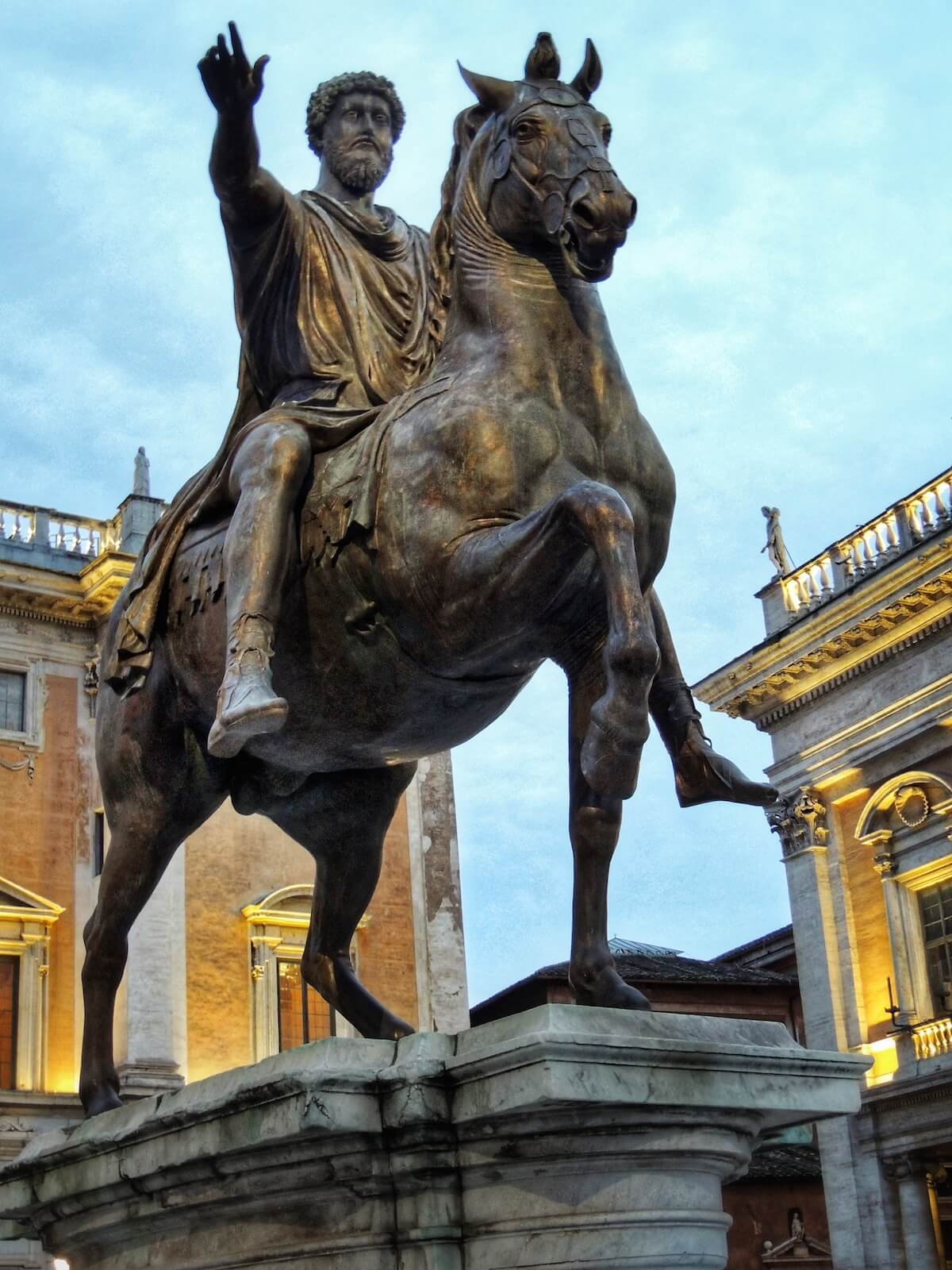 Of those 22 equi magni that we know graced ancient Rome, that of Marcus Aurelius is the only one to survive to the present day. As the power of the empire disintegrated many of its treasures were carried off and destroyed by invading hordes. In the Middle Ages the sculpture was widely and erroneously thought to depict Constantine, the revered first Christian emperor of Rome. Any temptation to have the sculpture melted down for its precious raw materials would have been quickly doused thanks to the work’s powerful symbolic connotations with the triumph of Christianity.

At some point in the early Middle Ages the sculpture was moved from its now unknown original location to the piazza in front of the basilica of San Giovanni in Laterano. During the Medieval period  this was an important civic and spiritual centre, home to the Pope and ringed with fortifications.  Wave upon wave of tourist visited the Lateran each year, drawn by Papal proximity and the fabulous collection of relics housed in the so-called Sancta Sanctorum (Holy of Holies). But it wasn’t only religious wonders that amazed visitors. 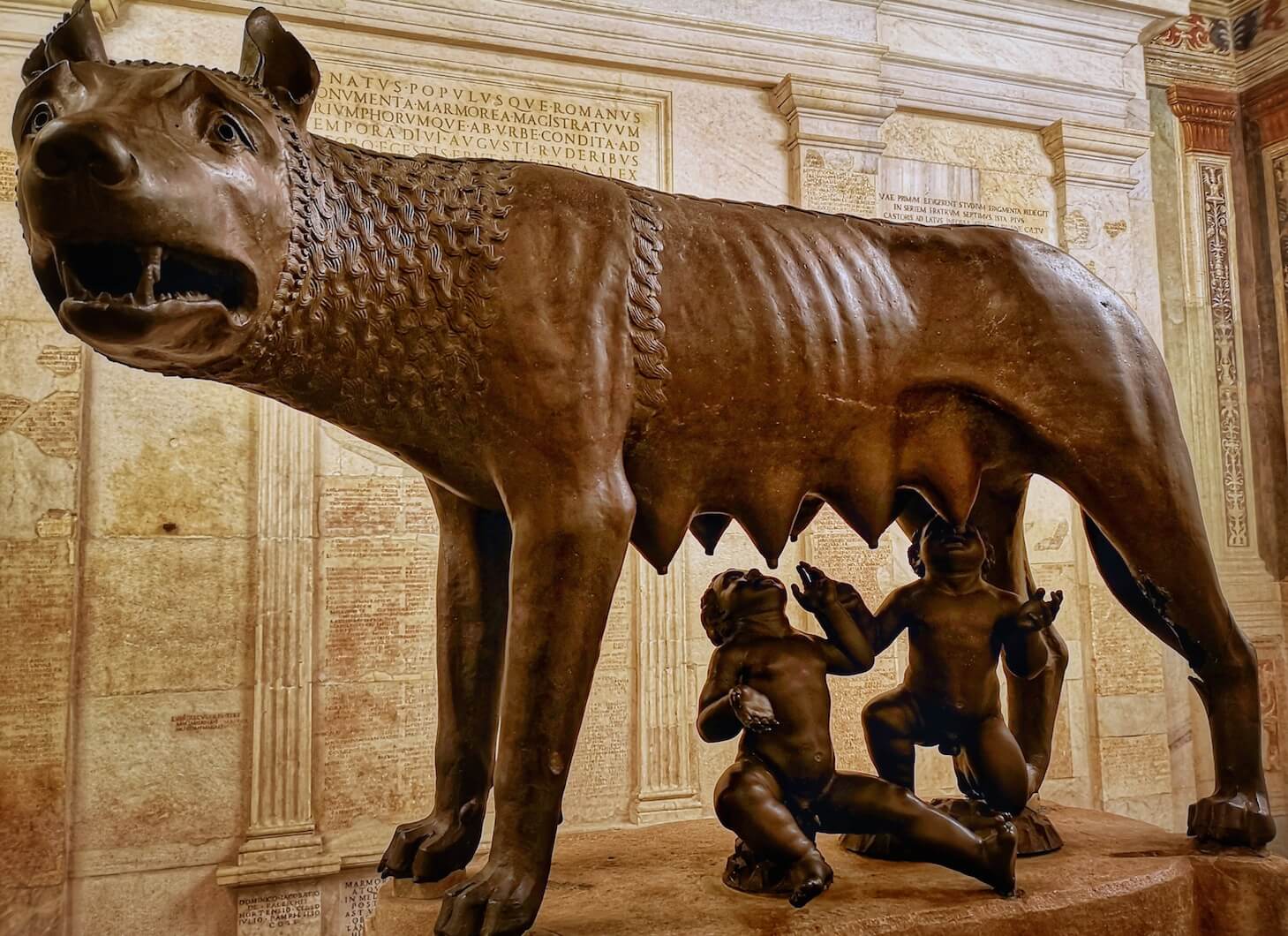 The enormous piazza in front of the medieval basilica, the no-longer extant Piazza Laterano, was home to a series of extraordinary ancient sculptures gathered there by a succession of popes. Amongst them were the iconic Capitoline She-Wolf, the thorn-plucking Spinario, and, of course, Marcus Aurelius himself, set on a plinth supported by lions. 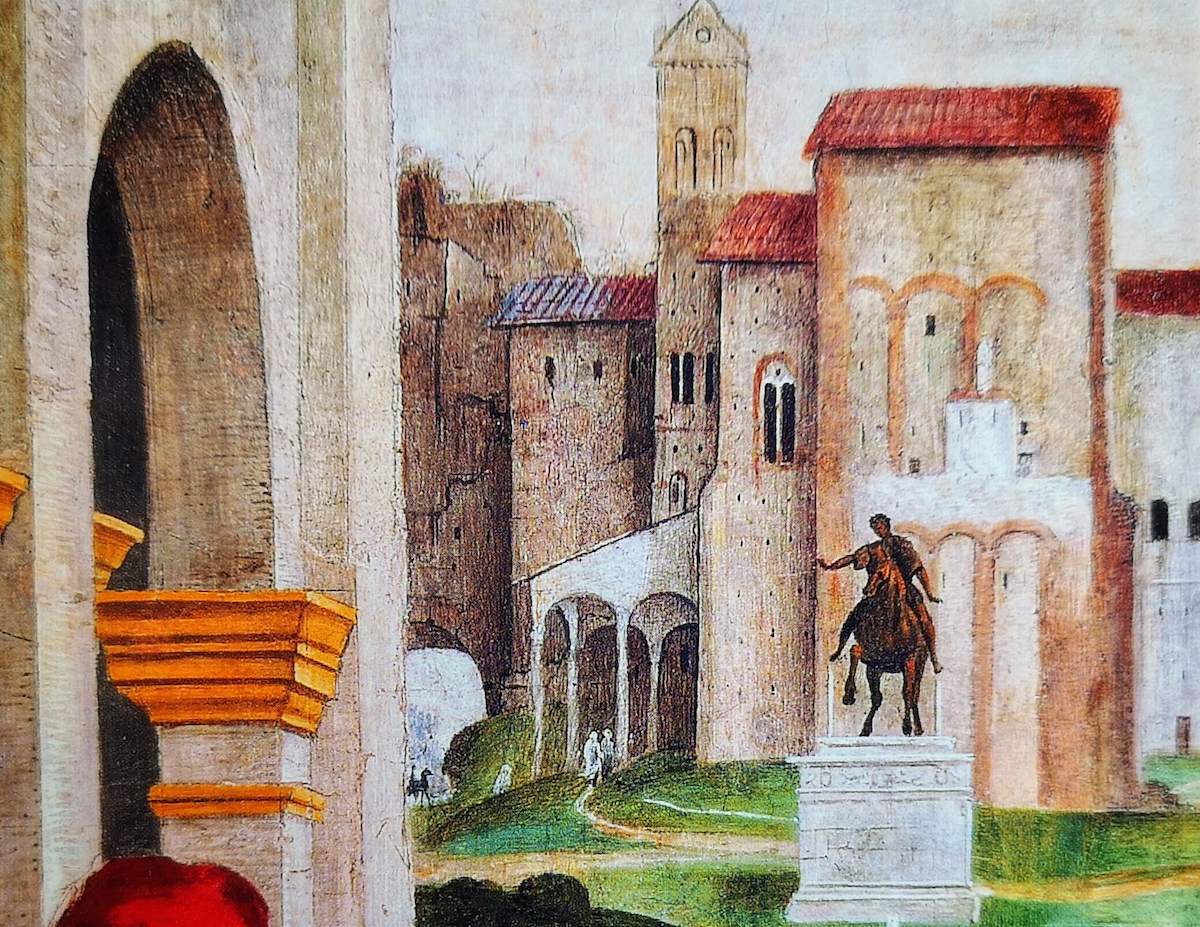 Written records place the statue here in the 10th century, but scholars consider it likely that it was moved there more than two centuries earlier. In the background of Filippino Lippi’s fresco depicting Saint Thomas Aquinas vanquishing heretics in Santa Maria Sopra Minerva’s Carafa Chapel you can see the medieval configuration of the statue at the Lateran. 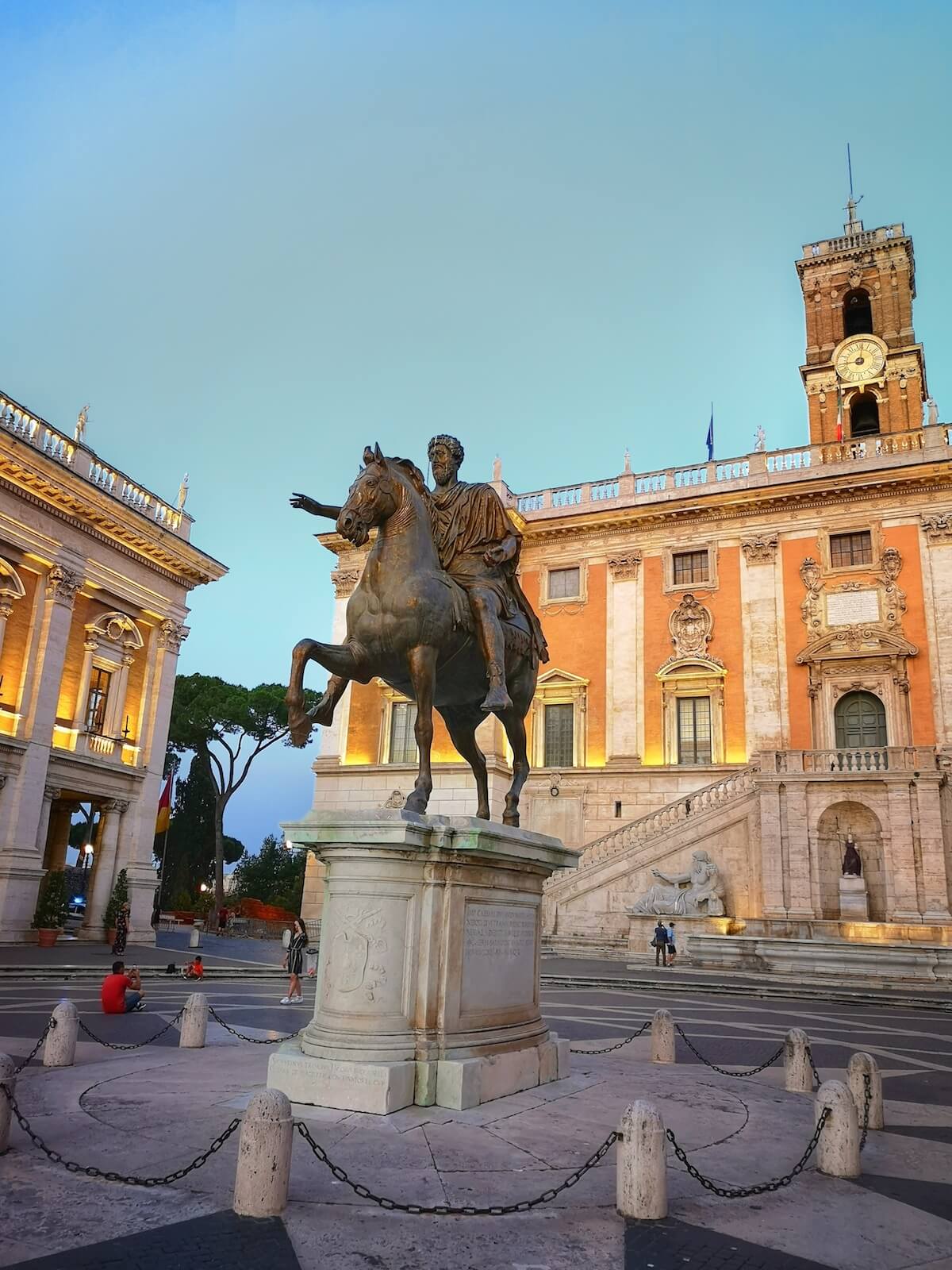 Although the smallest of Rome’s storied seven hills, in antiquity the Capitoline was probably the most important of the lot. The Capitoline Hill was where the massive temple of Jupiter Optimus Maximus was located and also constituted the climax of Roman triumphal processions. Throughout the Middle Ages and Renaissance the Capitoline had retained its importance on the map of Rome, and the erection of the Palazzo Senatorio here in the 13th century firmly established it as a centre of civic life in the city. By the time the 16th century rolled around, however, the infrastructure atop the Capitoline hill was showing its age. 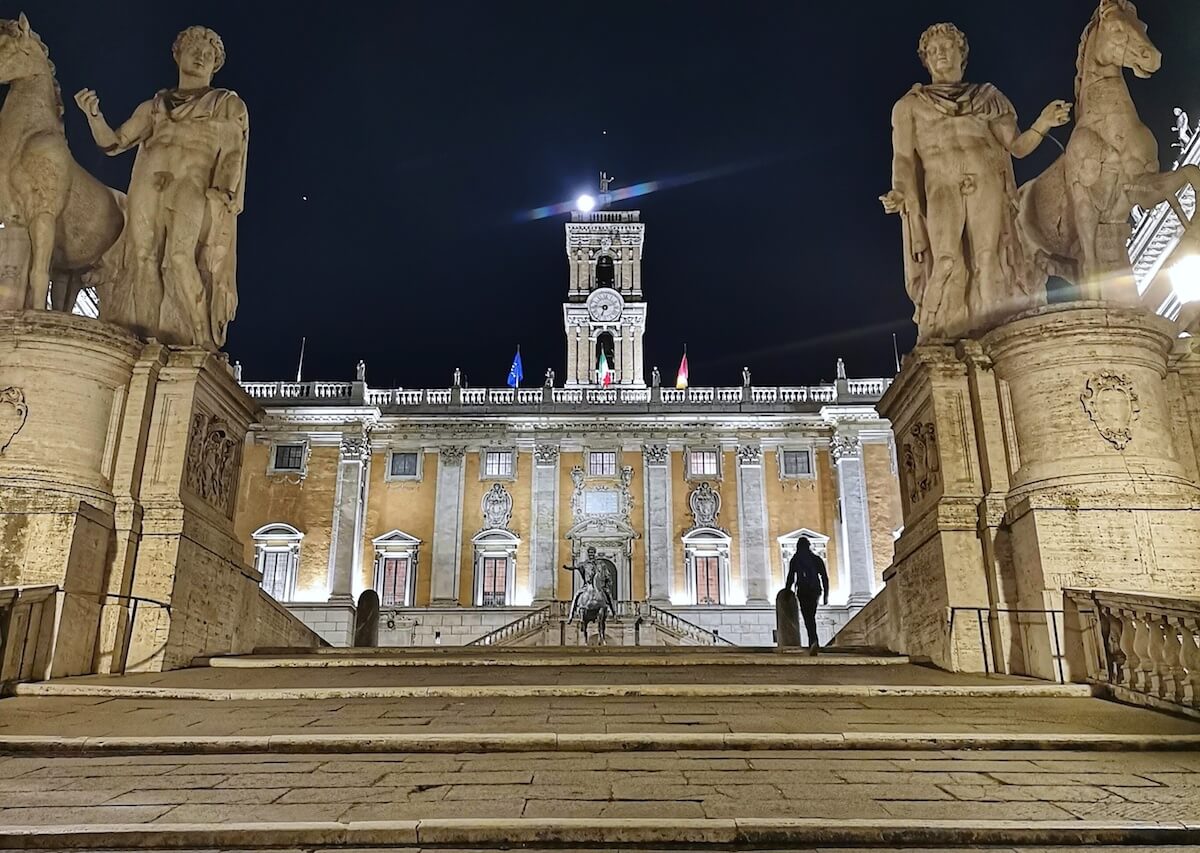 Embarrassed by a failed procession up the muddy slope when the Emperor Charles V visited the Eternal City in 1536, Pope Paul III ordered Michelangelo to renovate and redesign the space. The Pope had the equestrian statue of Marcus Aurelius dragged across town from its long-time home at the Lateran (now reduced in importance with the re-emergence of the Vatican as the seat of the Papacy), and Michelangelo carried out his end of the bargain by designing a brilliant trapezoid-shaped piazza to frame the ancient emperor on horseback, approached from the city below via a wide ramp known as the cordonata. For good measure, Michelangelo sculpted a monumental new marble base for statue.

Marcus Aurelius at the Capitoline Museums 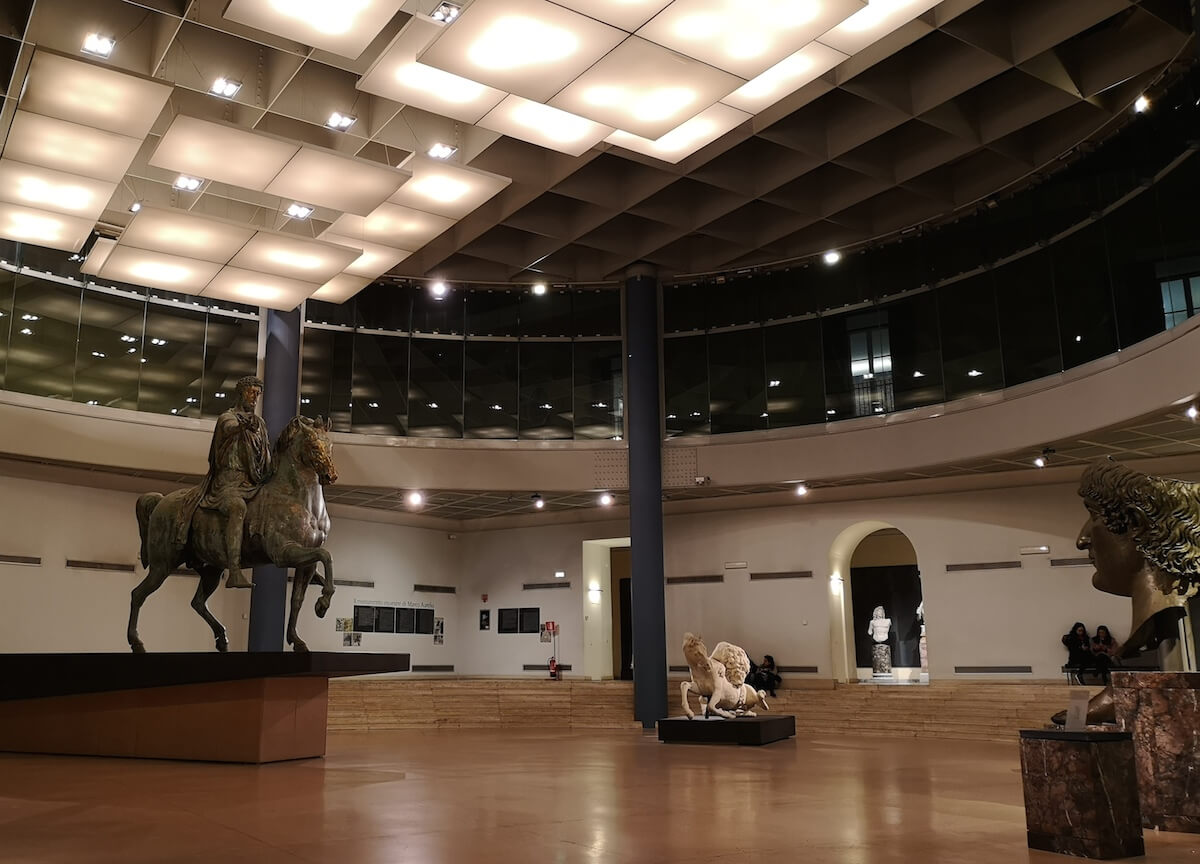 For almost 450 years the equestrian sculpture of Marcus Aurelius remained at the centre of the Piazza del Campidoglio. Investigations carried out in 1979 revealed serious corrosion of the monument - unsurprising after nearly 2 millennia exposed to the elements - and the emperor was removed from his plinth for painstaking restoration. Marcus saw light of day once more in 1990, when it was transferred to the climate-controlled safety of the Capitoline museums. A copy of was produced and placed on Michelangelo’s plinth at the centre of the piazza, where it still stands.

Today the original sculpture occupies pride of place in the Capitoline’s magnificent glass hall, known as the Marcus Aurelius Exedra. Although the equestrian statue dominates the space, there are other ancient masterpieces housed here not to be missed. The impressive remains of a massive gilded bronze sculpture representing Hercules, recovered from the Foro Boario on the banks of the Tiber, as well as a  monumental bronze head of Constantine both showcase the scale and extraordinary precision of ancient bronze-casting techniques. The marble group depicting a lion killing a horse meanwhile demonstrates the expressive dynamism of Hellenistic art. 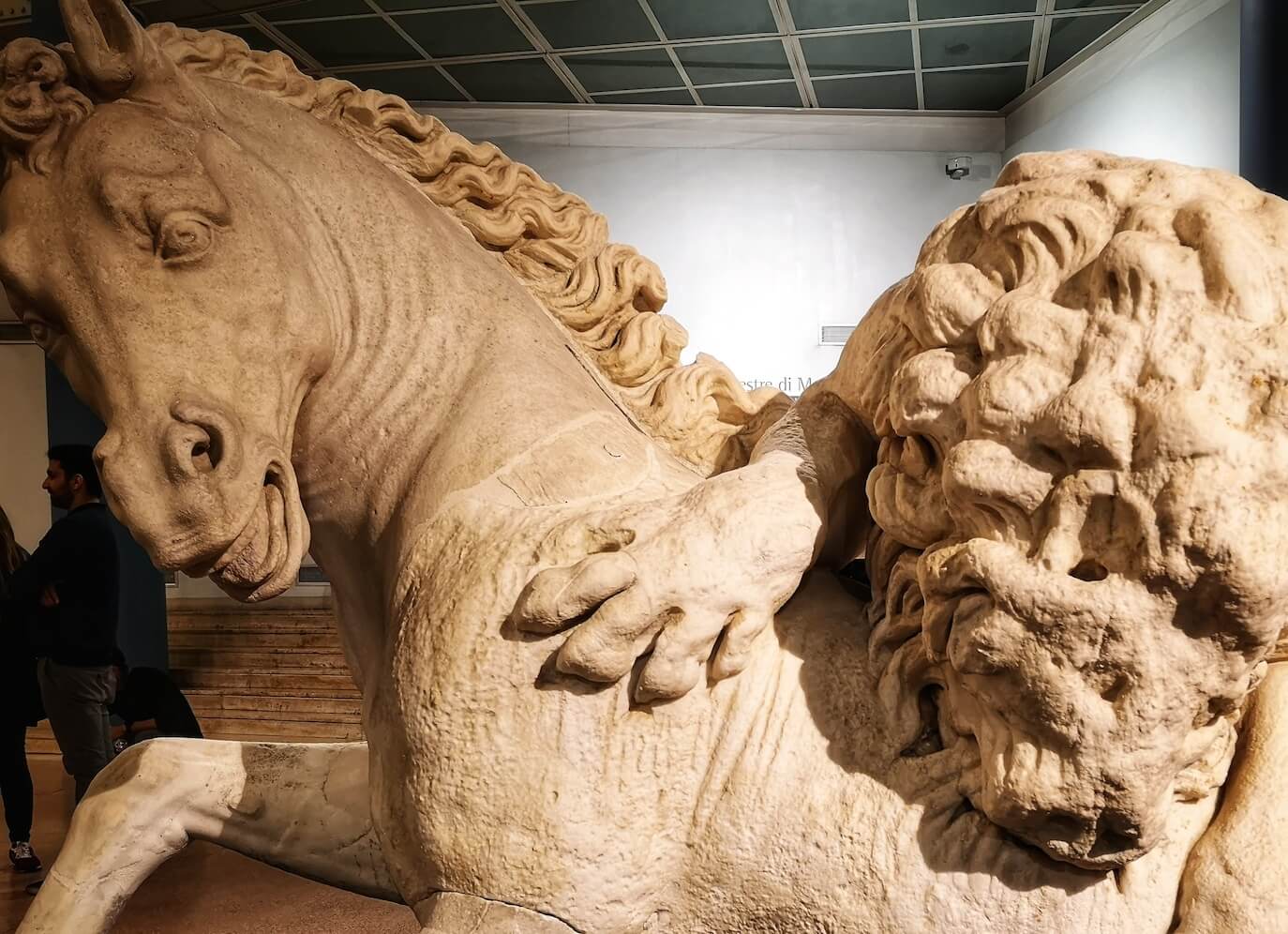