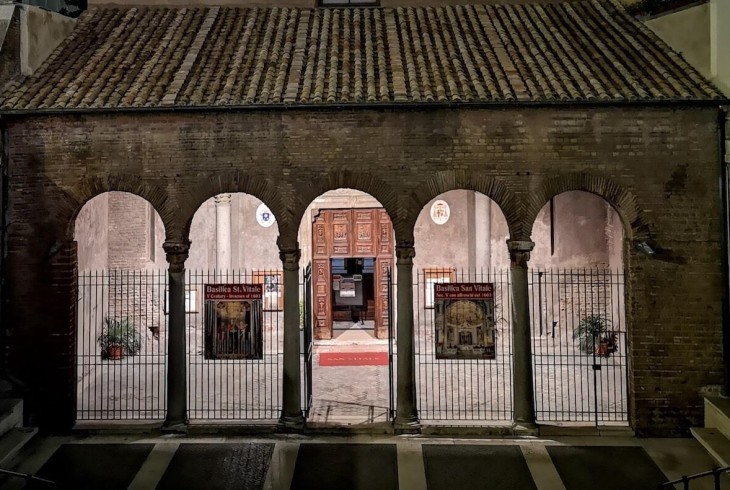 As an entrance it is no doubt theatrical, like some ancient evocation of the descent into a pagan underworld. Our romantic analogising is misplaced, however; this is on the contrary a very Christian place. Plunging down a steep flight of stone steps off Via Nazionale that few tourists ever bother to descend, one reaches the elaborately carved wooden doors of the strange, unloved little church of San Vitale.

Originally constructed in the early fifth century, the topographic shifts caused by centuries of erosion and the vagaries of town planning mean that only the roof of San Vitale is now at the level of the modern street. Whilst other ancient churches such as the more famed San Clemente were simply built over as the passage of the centuries raised the level of the city surrounding them, San Vitale had the good fortune to be built around, preserving it as a living relic of the past as the city developed above. 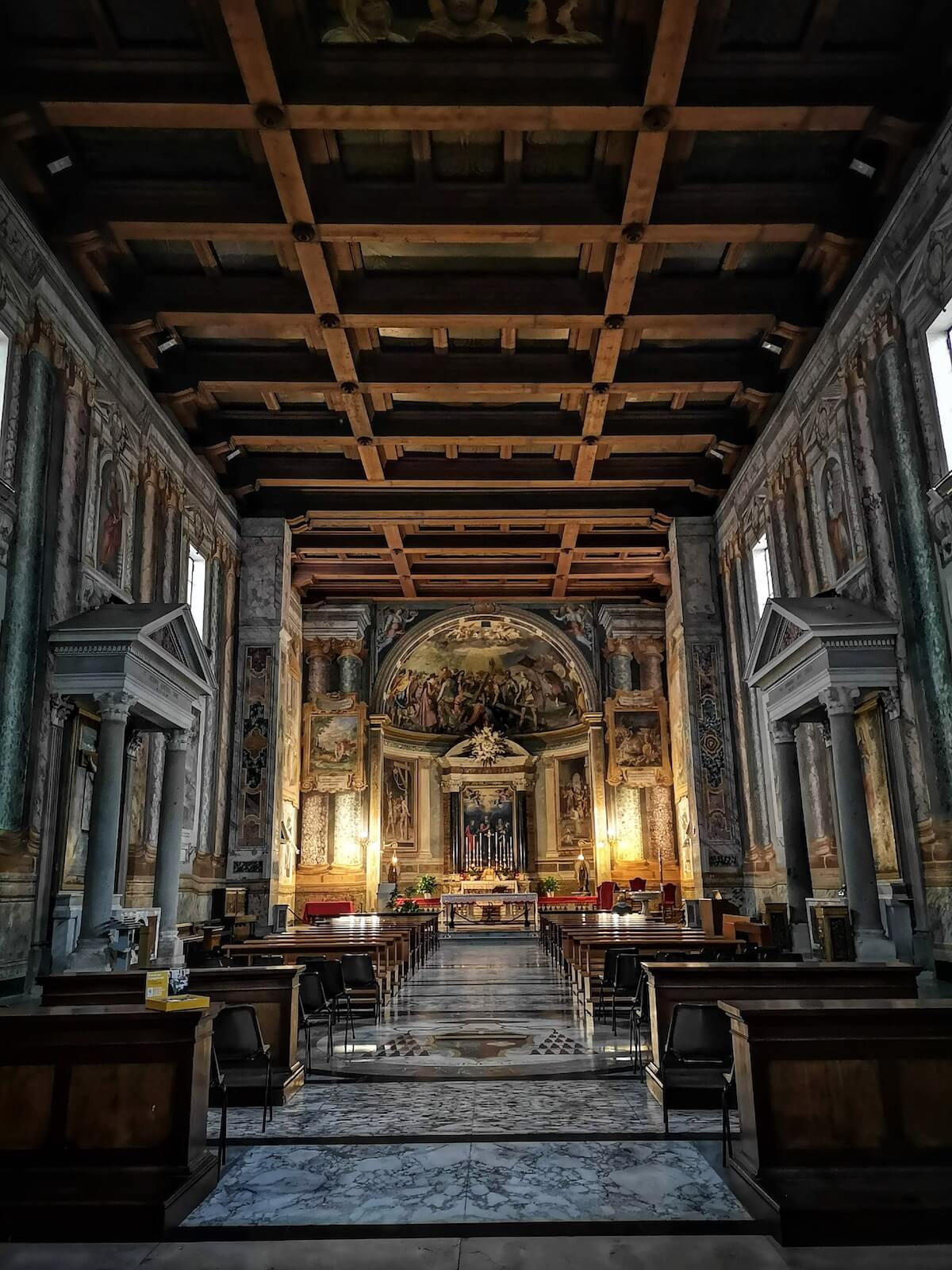 As soon as you enter this space, you are left in no doubt that this is a church long forgotten by time. Leaving the modern city behind you, this is a descent into the city’s past, into an era very different from our own. Dim, dank and musty, it is almost invariably empty apart from the occasional devout parishioner reciting a quick prayer in the silence. As your eyes get used to the low light, one notices that almost every inch of this interior is covered in decoration – the product of one of the church’s periodical restoration projects.

On each wall is painted a series of enormous frescoes, which at first glance depict nothing more than the peaceful landscape of the ancient Roman campagna. Completed in the dying years of the 16th century, when San Vitale itself was described as still being located ‘in piena campagna’, our initial impression of these works is one of sublime picturesque grandeur - of soaring trees, crystalline lakes and vivid sunsets. But as your eyes become more and more accustomed to the gloom, peer a little more carefully into the darkness. A discomfiting realisation will inevitably dawn - these are far from the bucolic images of country-bliss that they seem. 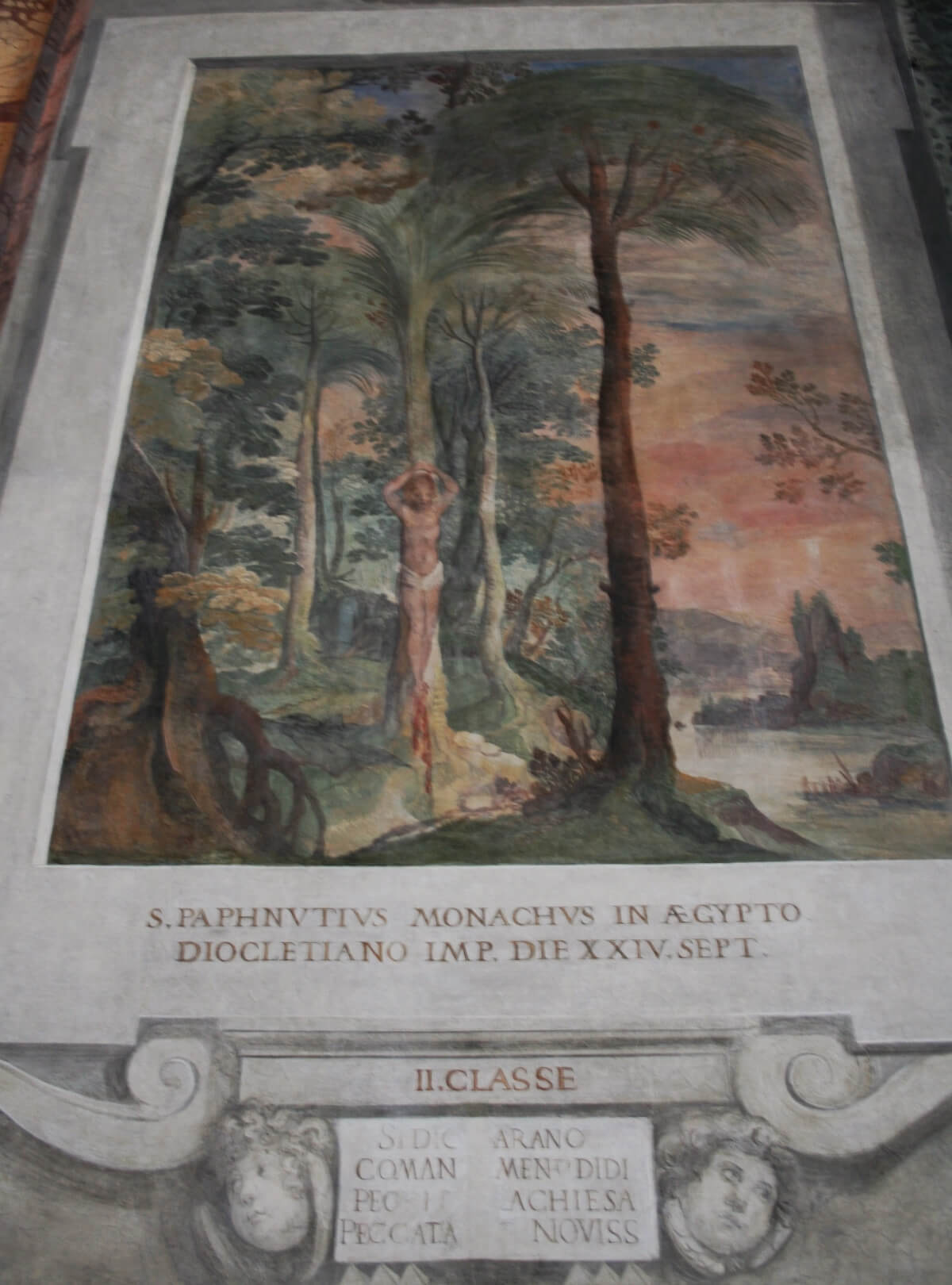 In one, a tranquil pastoral scene of a little copse of trees overlooking the sparkling waters of a picture-perfect lake, we gradually realise that this tableau is not as entirely devoid of humanity as we had at first imagined. Something horrific is hiding in the gloom: a man, naked apart from a loincloth, his skin almost the same colour as the tree-bark, has been nailed to one of these soaring pines. A livid patch of crimson, evidence of the bloody deed, slowly oozes down its trunk. This secluded spot is a place of execution. In another leafy landscape, in front of the picturesque ruins of an ancient amphitheatre silhouetted against the golden light of the fading sun, a man dressed in the clerical garb of an early Christian bishop is being savagely torn apart by lions.

Unless you arrive at the time of day when sunlight is streaming through the little windows high up in the church-walls, the details of some of these frescoes can be difficult to make out; the figures are tiny and the encompassing landscapes enormous. But the longer you force yourself to look, the more you will see. A decapitation here, a drowning there, each gruesome act almost lost amongst the hills and trees of the Roman countryside.

There is something irrepressibly disquieting about these paintings, even something perverse. Gentle landscapes shouldn’t conceal such nasty surprises. We are all taught that in the grand narrative of Renaissance and Baroque art the landscape is a less demanding, more tranquil relative to the serious business of ‘history’ painting. Michelangelo was famously alleged to have remarked that landscapes were fit objects of contemplation only for children, whilst Raphael usually delegated the landscape elements of his works to assistants. Yet here the modes have been decisively confused, and our preconceptions disturbed. What could be the purpose of transforming scenes of such beauty into scenes of terror? 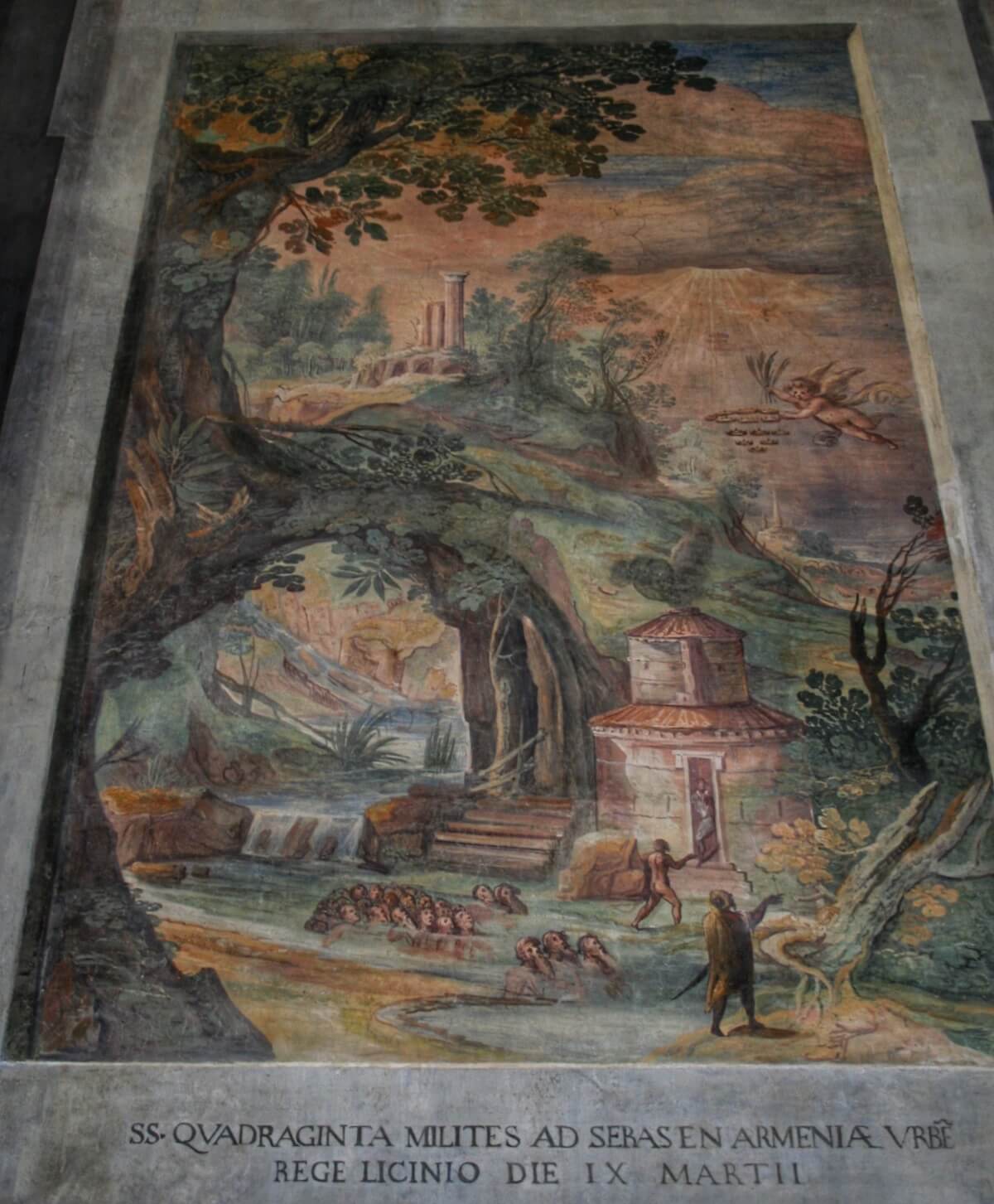 We must not think of these paintings as purely aesthetic objects. The frescoes that we encounter in this dark and musty space 50 feet below the street level of the modern city were not painted simply for the visual delectation of the patricians and cardinals that were the great connoisseurs of their day. This was not a place for members of the Catholic hierarchy to amaze the world with the material splendours of the resurgent, triumphant Counter-reformation Church. Much like the church of Santo Stefano Rotondo across town, San Vitale was instead a Jesuit novitiate, a place where young novices were sent to learn about the spiritual path that they had chosen. For the master propagandists of the Jesuit order, a picture really was worth a thousand words, and thus the frescoes that adorn its walls were above all meant to teach, instruct and inform.

But what spiritual lessons could these gruesome pictures convey? Most of us today are rather ill-equipped to unravel their spiritual and scholastic messages. For the 16th-century novices, however, interpretative help was at hand in the form of the explanatory Latin captions and texts that surround each image. For the young missionaries, the process of understanding these paintings was an exercise in scholarly deduction in which their capacity for visual, verbal and intellectual acuity were all being tested. From the documentary captions beneath each image, they would learn that the men being tortured and killed all around them were their spiritual forebears, the early Christian missionaries who were persecuted for spreading the word of God throughout the still pagan Roman Empire. The Jesuits had been tasked by their founder Ignatius of Loyola to resume the missionary work of Christ’s first followers in the rapidly expanding world of the 16th century. Like the now distant paragons commemorated on the walls of their novitiate, these new warriors of Christ must expect to be persecuted for their beliefs in distant lands. This, it is now clear to the young Jesuit novices, is their inevitable fate, the ultimate sacrifice they must pay to ensure their eternal salvation.

But surely the biggest challenge that these didactic paintings posed for the young prospective missionaries was a psychological one. Pain and persecution insidiously invades the apparently safe world of the pastoral landscape, indeed invades the very walls of their spiritual home. For those called to such a life in the service of God, there will never be a moment of comfort, there will never be a safe-haven, on this terrestrial earth. Perhaps that is why these images are so fascinating and disquieting even today, in a far more secular world where the concept of Christian martyrdom leaves us cold. In these images the modern viewer is not confronted by the terrible reality of the suffering that awaits him, but there remains something uncanny, something upsetting about these familiar and comfortable landscapes, such as we see in almost every art gallery in the world, metamorphosing into sinister scenes of pain and suffering in the gloom of this forgotten church.