The Best Towns in Umbria: 10 Day Trips from Rome to the Green Heart of Italy in 2021 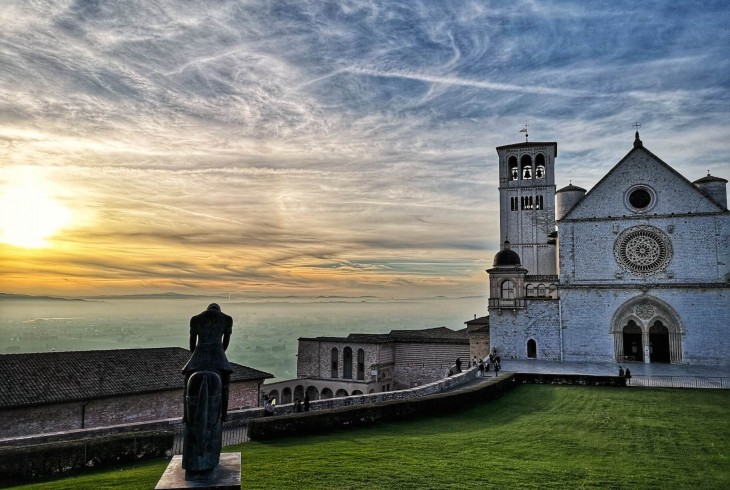 Welcome to the green heart of Italy! A few weeks ago in these pages we profiled some of our favourite towns and villages in Lazio that make great day trips from Rome. This week we are roaming a little further afield, and crossing the border north into Umbria. A wonderful patchwork of unspoiled mountain scenery, picture-perfect hill-top towns, mouthwatering cuisine and great art,  Umbria is one of Italy's most enchanting regions. Still overshadowed by bordering Tuscany, Umbria is not on the major tourist trail for most visitors, and remains one of the country's true hidden gems. And with great transport links from the Eternal City by rail, it's easy to explore the region on day trips from Rome.

To whet your appetite for your Italian adventures in 2021, we've put together a list of some of our favourite destinations in Umbria. Read on and get some inspiration for your travel plans in the post-Covid era! 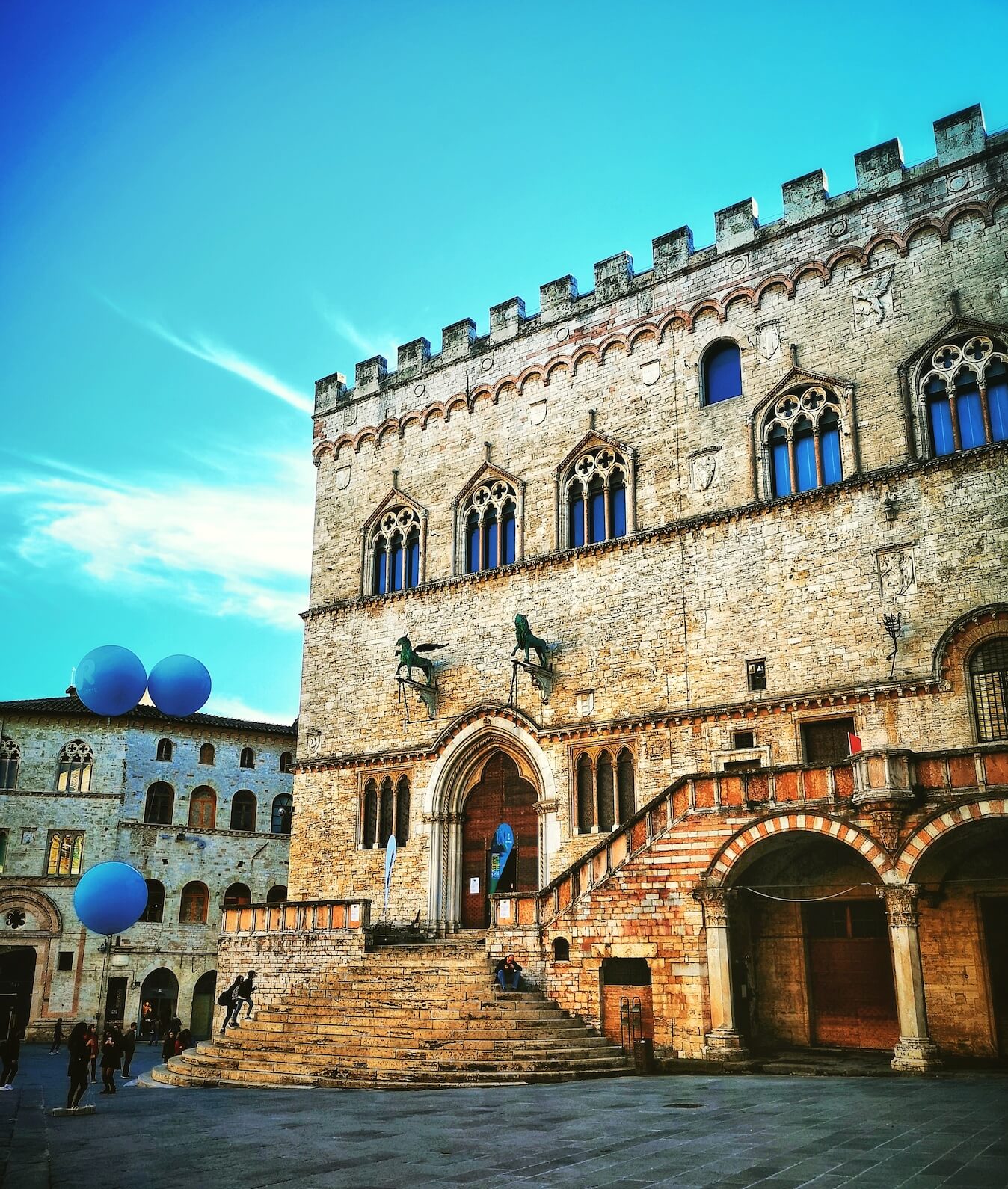 Postcard-worthy Perugia is Italy’s most spectacular medieval city. Known for its magnificent architecture, vibrant university atmosphere, exceptional cuisine and impressive art-collections, the city has a lot going for it. Dominating Perugia’s stunning main square, the Piazza IV Novembre, is the imposing 13th-century  Palazzo dei Priori, where important representatives from the powerful guilds met to govern the city.  Keep an eye out for the regal griffin and lion above the door - the originals are now safely deposited in the city’s fabulous art gallery nearby, and can stake a claim to being the first large scale bronze sculptures to be cast since antiquity when thy emerged from Venice’s Arsenale foundry in 1274. Don’t miss the magnificent Fontana Maggiore in the centre of the Piazza, a masterpiece of 13th-century sculpture with scenes depicting the labours of the seasons by father and son duo Nicola and Andrea Pisano. 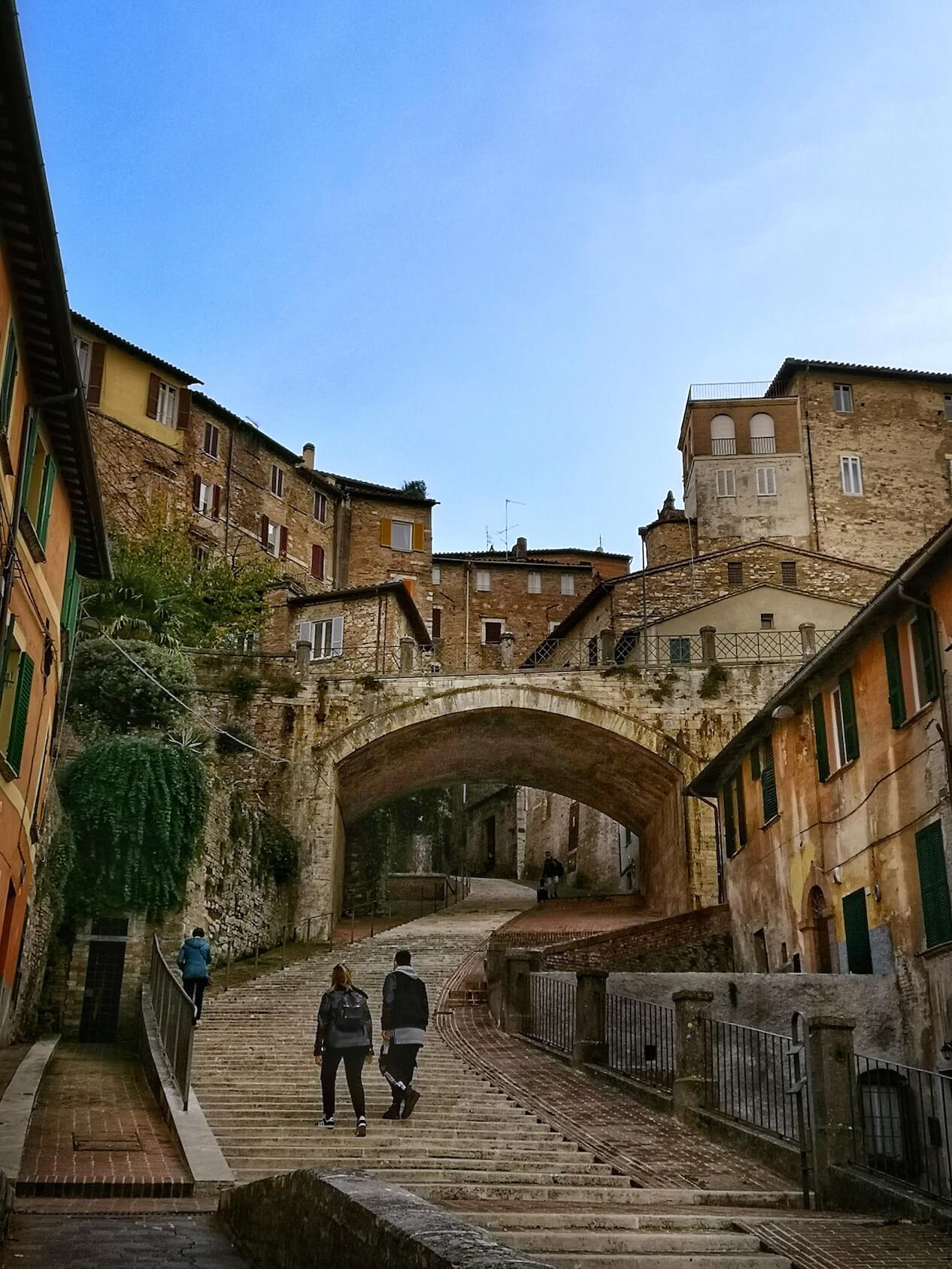 Other highlights include a medieval aqueduct that runs through the city centre like a spine: following the route of its venerable arches makes for a spectacular city walk. Take a peek into the chapel of San Severo to see one of Raphael’s early masterpieces, and make the hike up to the Temple of Saint Michael the Archangel above the city for a taste of pastoral bliss. 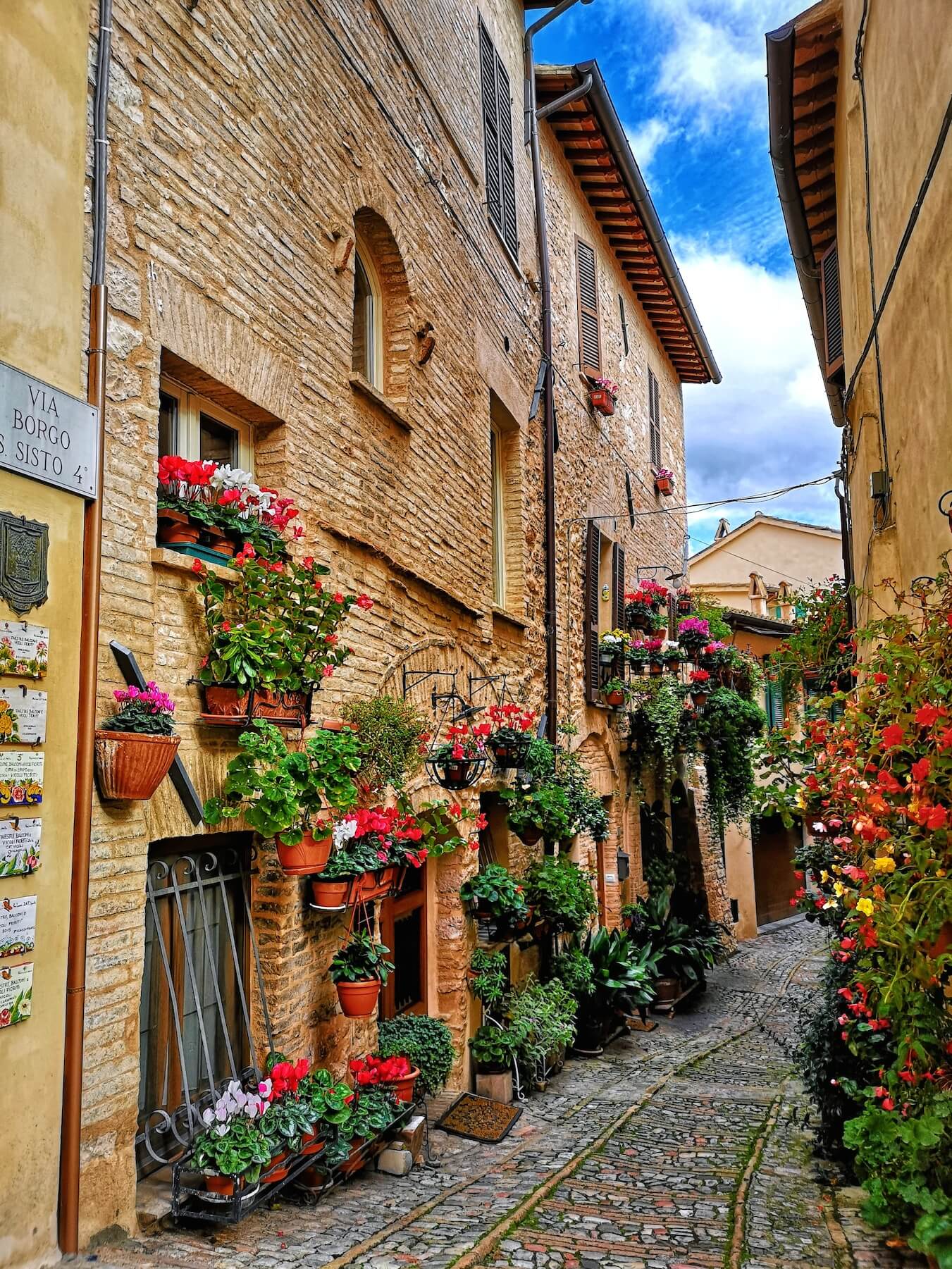 Nestled deep in the Umbrian countryside, the picture perfect town of Spello is one of the most beautiful towns in the entire country. Its warren of immaculately preserved medieval lanes snaking between ivy-clad brick buildings and across the hillside have to be seen to be believed; great food, spectacular Renaissance frescoes by Pinturicchio and a series of incredible Roman monuments including the imposing Porta Venere only sweeten the deal. At a little over 2 hours by train from Rome, Spello is also an easy day trip from the Eternal City - if you're looking to escape the urban bustle for the day, you could do worse than chart a course to the "city of art and flowers"!

Spello is known above all for two things - its wonderful artistic heritage and its fascination with flowers, which adorn the town's every street and are celebrated in the annual Infiorate di Spello, celebrated every year on the festival of Corpus Domini. 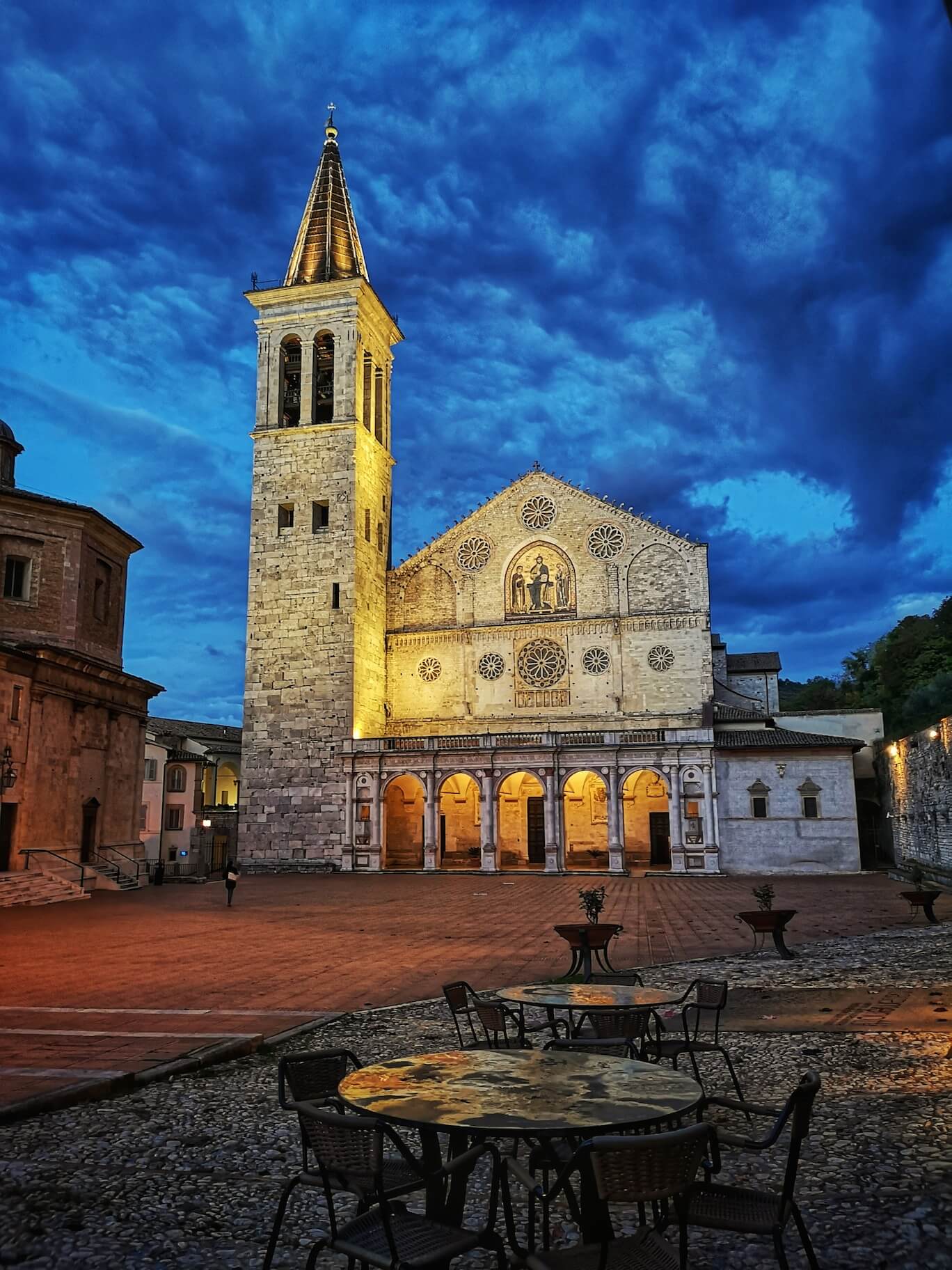 Few towns in Italy can match Spoleto for sheer natural beauty. Nestled in the foothills of the soaring Appenine mountain range, the town is dominated by an imposing medieval fortress. Spello’s charming patchwork of medieval alleys is capped by the magnificent Piazza del Duomo with the  cathedral of Santa Maria Assunta. The beating heart of the city, the cathedral is a stunning example of Romanesque architecture, complete with rose windows and pointed arches, glittering Byzantine mosaics and a picture-perfect bell tower. Cross the threshold and you'll find a series of frescoes by Filippo Lippi within that are amongst the finest examples of Renaissance painting in all of Italy. 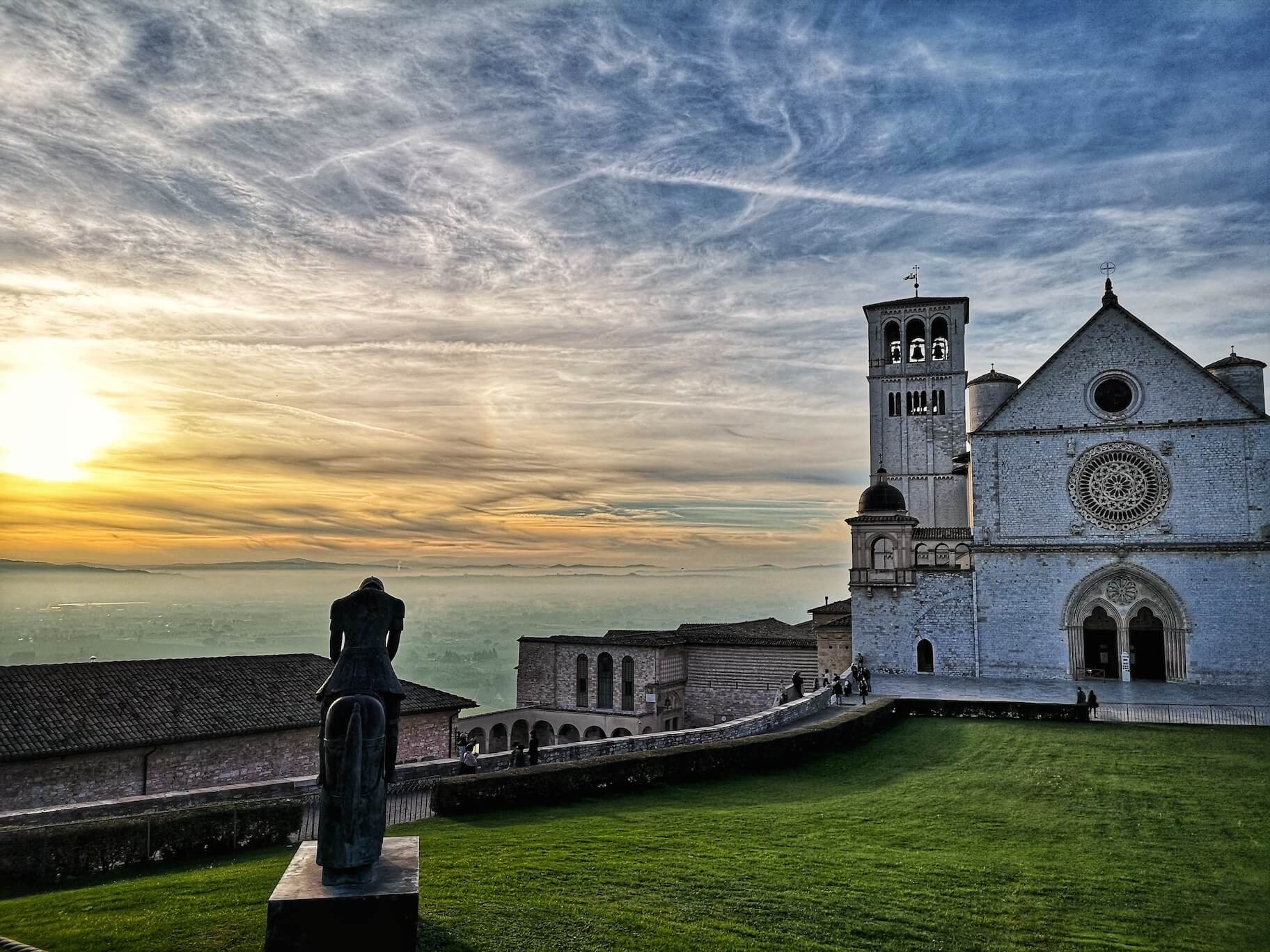 Some places are so beautiful that they defy description. If anywhere is proof that a picture is worth a thousand words it's the breathtaking Umbrian hill town of Assisi, where the split-level 13th-century Basilica of St Francis (named after the town's most famous son) is one of the most eloquent monuments to the first stirrings of the Renaissance in all of Italy - Giotto's unforgettable frescoes inside paved the way for the most famous revolution in Western art. 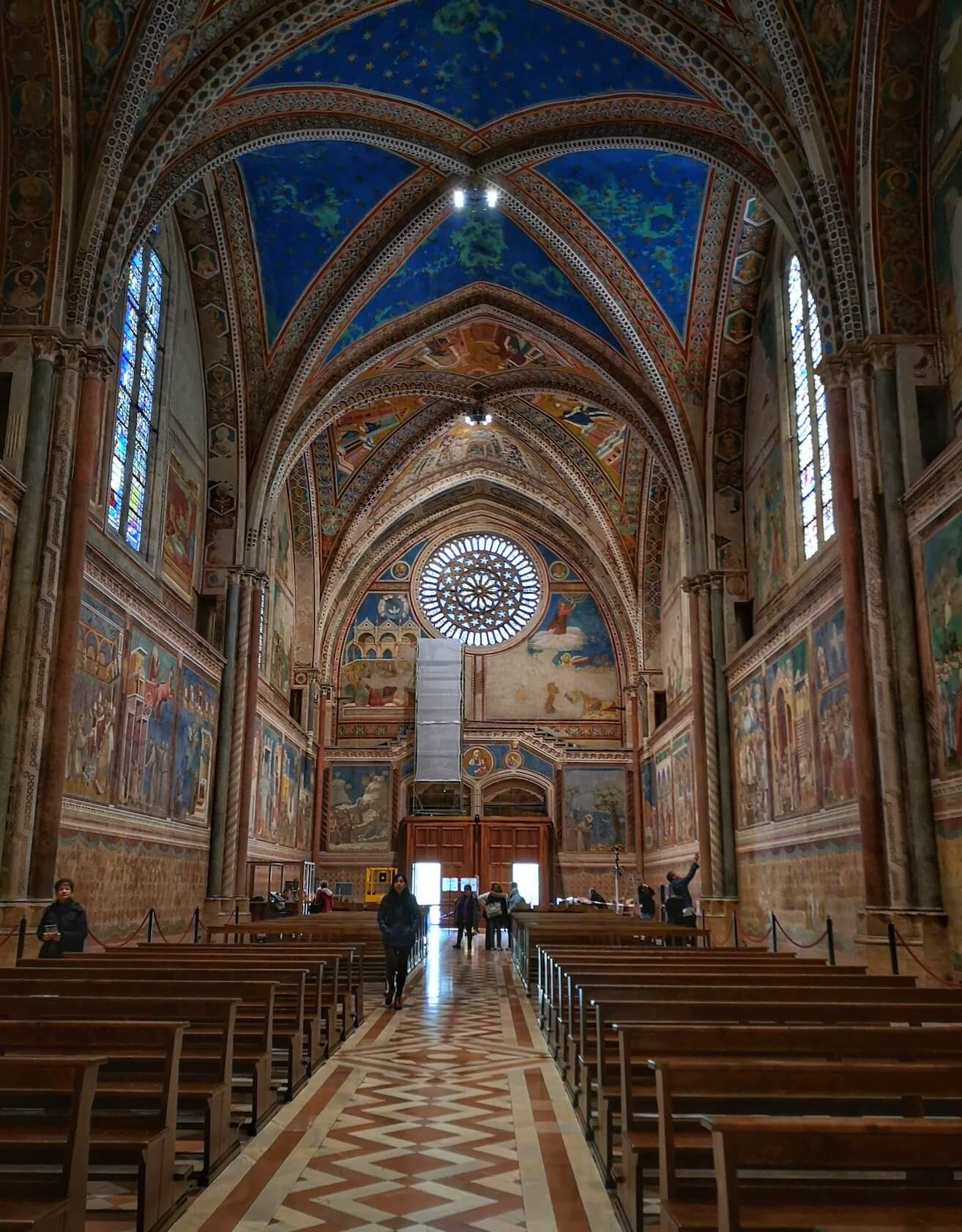 No less spectacular are the sweeping views of the Umbrian countryside offered by Assisi’s panoramic perch, wreathed in mist that spreads out in the valley below. Little wonder that Christianity's most fervent defender of the environment achieved enlightenment in this magical place, striving to marry spirituality to nature; little wonder too that the extraordinary effects of light and colour afforded by the local landscape drove local artists like Perugino and Pinturicchio to new feats of illusionistic virtuosity - even today the spectacular views from the town seem to be taken straight from the canvas of some Renaissance master.

Jaw-dropping Assisi is world-famous for good reason - do yourself a favour and spend a night or two here wandering through the towns’s picturesque tangle of narrow cobbled streets studded by beautiful churches - after the day-trippers leave you’ll have the place largely to yourself! In addition to the double church of San Francesco, the basilicas of Santa Chiara, San Rufino and San Damiano are no less worthy of a visit - this last picturesquely sited in olive groves a mile out of town, where nature-loving Francis was reputedly inspired to pen his magical Canticle of the Creatures. 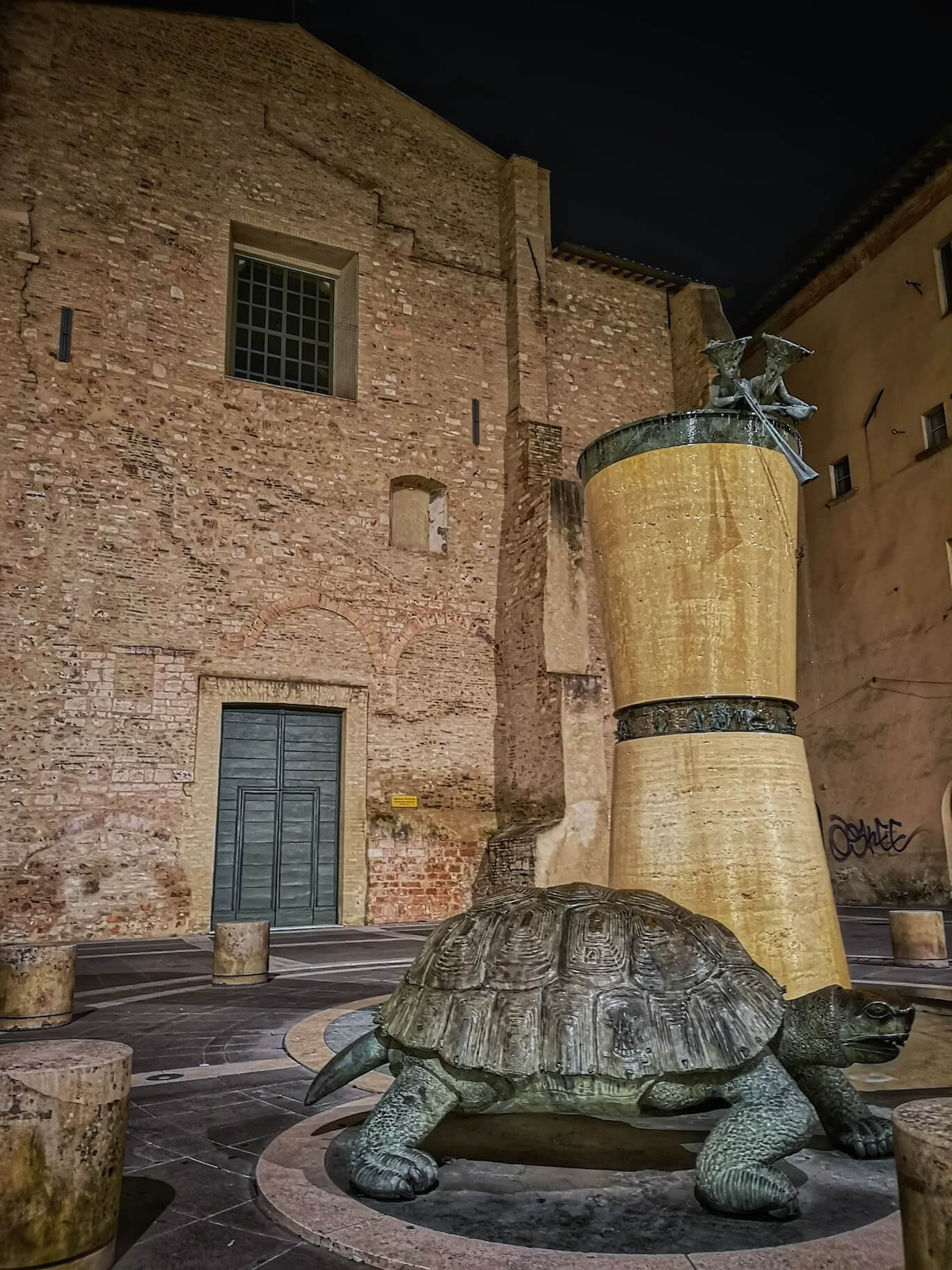 A stone’s throw from Spello, Foligno is probably more famous for what isn’t there than for what is - Raphael’s extraordinary Foligno Madonna, now one of the treasures of the Vatican Museums, was commissioned to give thanks for the miraculous sparing of the house of learned humanist scholar Sigismondo de' Conti during a devastating lightning storm. Napoleon pilfered the panel during his rampage across Italy in 1799, before being installed at the Vatican after the emperor’s defeat at Waterloo.

But enough about what you won’t see in Foligno. Set on the banks of the Topino river, the town is usually ignored by tourists on their way to Assisi further north - their loss! Unmissable is Foligno’s spectacular cathedral, looming over the central Piazza della Republica, which is also home to two other architectural gems: the Renaissance Palazzo Orfini, where the first printed edition of Dante’s Divine Comedy was published in 1472, and the wonderful late-medieval Palazzo Trinci, with its jaw-dropping series of early 15th-century frescoes by masters of the calibre of Gentile da Fabriano and Jacopo Bellini.

Come in June or September and you might be lucky enough to witness the epic twice-yearly historical joust known as the Giostra della Quintana, with associated parades, costumes and feasting all recalling the town’s glory days in the early Renaissance. 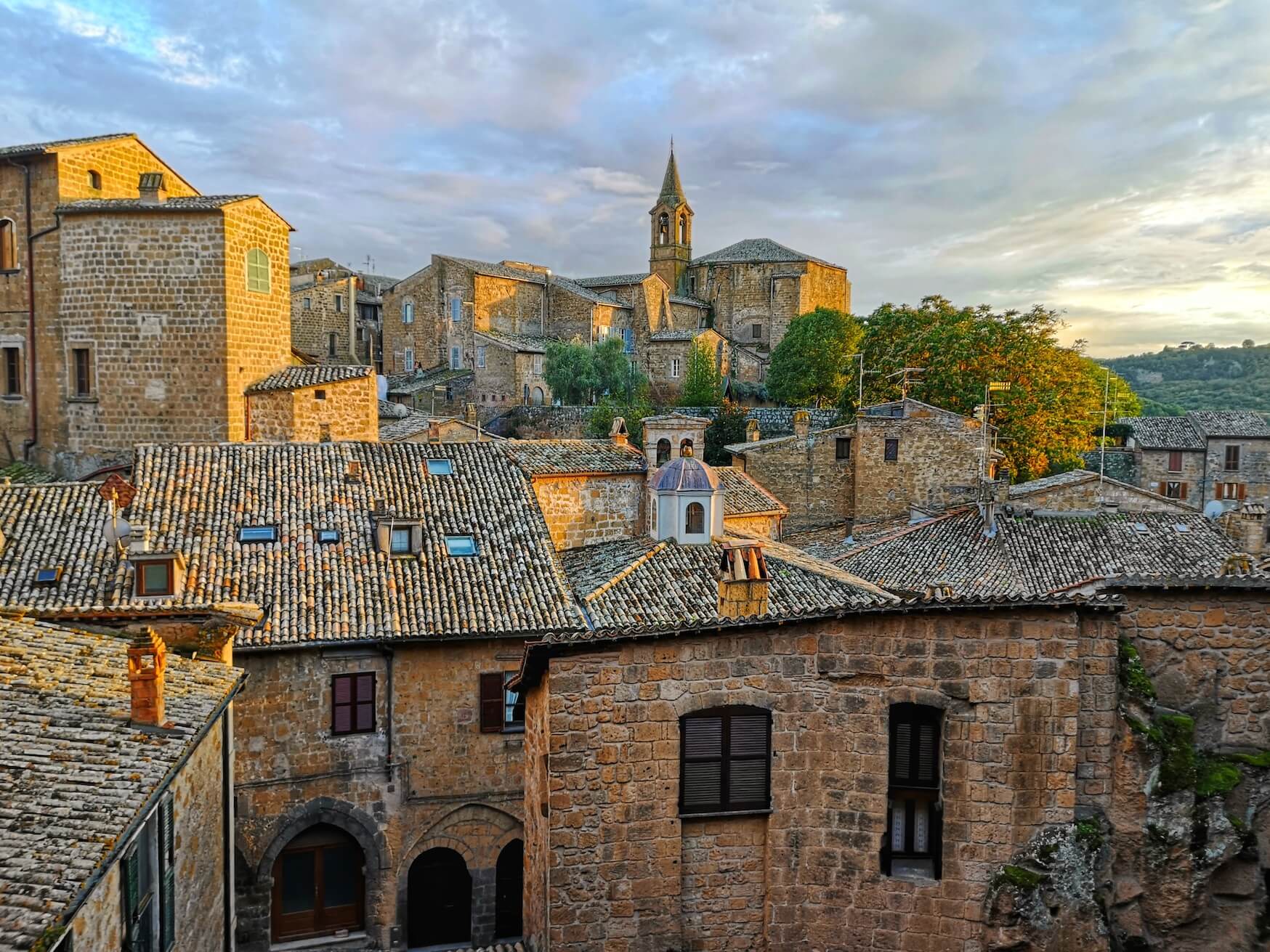 Immersed deep in the green and rolling landscape where Umbria, Lazio and Tuscany meet, Orvieto is one of Italy's most spectacular towns. Wonderful medieval buildings tumble down the hillside in jumbles of honeyed brick and rustic tiles. The undoubted highlight is Orvieto's jaw-dropping Duomo, whose opulent exterior gives way to Luca Signorelli's epic Renaissance frescoes of the end times within, an apocalyptic vision to rival Michelangelo's Last Judgement in the Sistine Chapel. But there's a lot more to Orvieto than it's world-famous cathedral. 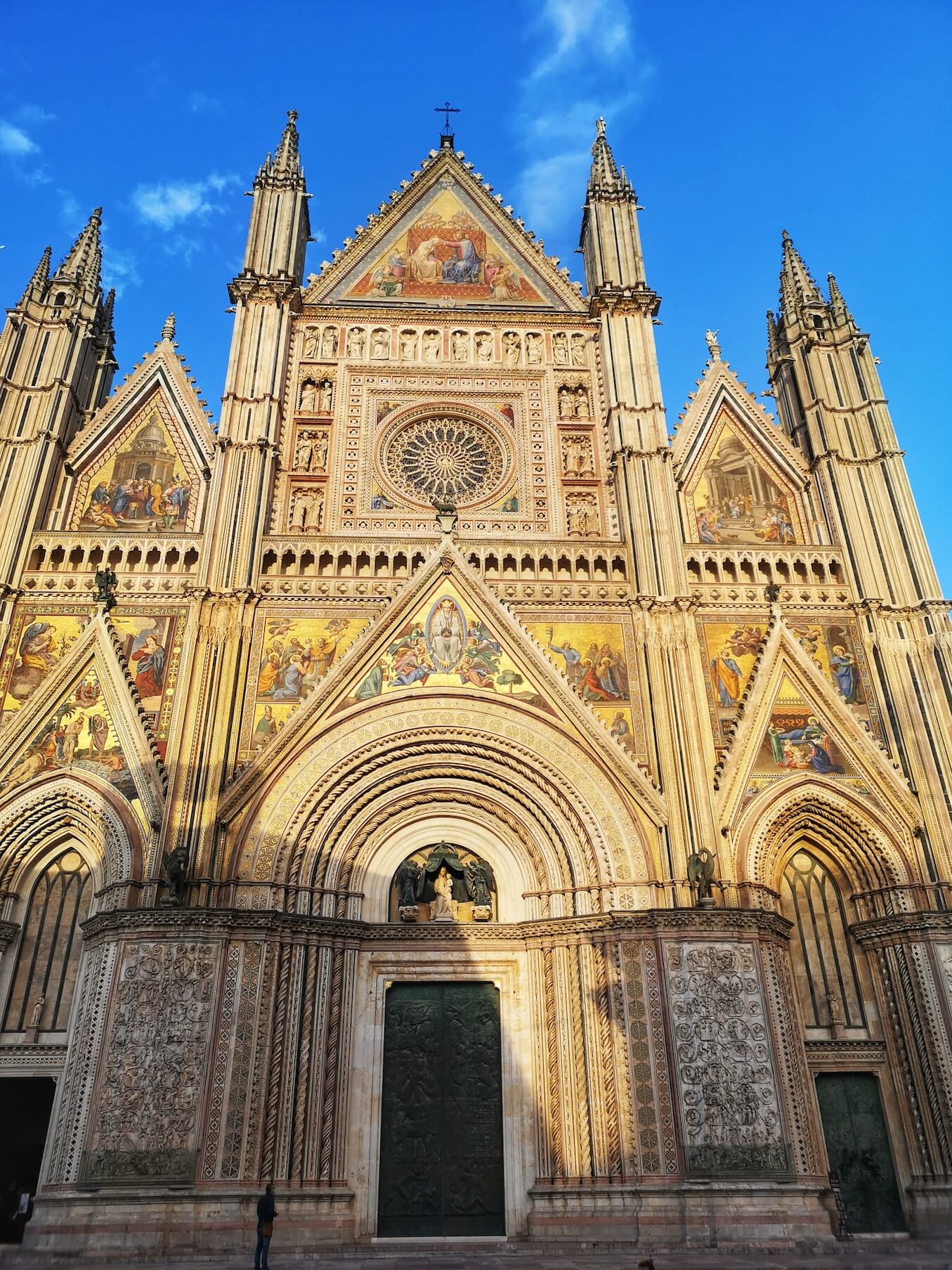 For a fascinating insight into the ingenuity of Renaissance engineering descend into the Pozzo di San Patrizio, a 175-feet deep well designed by Antonio di Sangallo at the behest of Pope Clement VII, who had fled to Orvieto after the Sack of Rome in 1527. Don’t miss too the spartan and ramshackle church of San Giovenale, an 11th-century affair that offers panoramic views of the rolling Umbria countryside far below.

A hill-town with a difference, starkly beautiful Gubbio has the otherworldly air of a medieval fable. Clinging precariously to the slopes of Monte Ingino, the town is a dense patchwork of stony buildings topped with red-tiled roofs, imposing gothic towers, haunting churches and ancient Roman ruins. Dominating everything is the immense panoramic Piazza Grande, a 14th-century design seemingly suspended over the abyss flanked by austere crenellated Palazzo dei Consoli and Palazzo del Podestà. The Gothic cathedral is worth a visit too, as is the imposing 15th-century Palazzo Ducale, built by the  Duke of Montefeltro. Take the funivia (chair lift) from the town centre further up the mountain to the Basilica di Sant’Ubaldo to get a glimpse of the relics of the town’s patron saint, 12th-century bishop Ubald.

Dubbed one of the most liveable and sustainable cities in Italy, Todi enjoys a commanding position on a hill overlooking the river Tiber, a jumble of honey coloured houses clinging to the slope and visible from every direction. Founded according to legend by none other than Hercules himself,  the town was a stronghold of the ancient Umbri before being conquered by the Romans in 217BC. Fascinating traces of the Roman era still remain, but the city's heyday was in the Middle Ages when the town boasted a population of over 40,000 - far greater than contemporary Rome. The real action takes place in central Piazza del Popolo, home to the spectacular Gothic cathedral, and trio of medieval palaces the Palazzo del Capitano, the Palazzo del Priore and the Palazzo del Popolo. Beyond the monuments, there are few greater pleasures than enjoying a lazy wander through the town's dense tangle of streets and alleys as they wind their way up the hill.

If you think of yourself as a foodie, then you owe yourself a visit to the beautiful medieval town of Norcia, located on a gentle river valley at the foot of the  Monti Sibillini. Immersed in some of the most unspoiled countryside that Italy has to offer, Norcia is the principal town of the isolated Valnerina region and is famous for its delicious cuisine - think locally foraged black truffles, renowned prosciutto crude and dried wild-boar sausage. Norcia is so well-known for its gastronomic products that a common name for a deli-shop is a Norcineria - literally a purveyor of goods from Norcia.

Sadly the town was rocked by two devastating earthquakes in 2016, destroying the 13th-century basilica of Saint Benedict and other buildings in the town. Once one of central Italy’s most charming medieval piazzas, today the piazza is a somewhat sobering sight, with the ruined facade of the basilica keeping ghostly watch over the town.

Scenically perched on the shores of Lake Trasimeno, Castiglione del Lago is dominated by the imposing pentagonal Castello del Leone, constructed in the 13th century by Frederick of Swabia.The elegant Renaissance Palazzo della Corgna meanwhile was the town’s most important building in the 16th century, and boasts magnificent Mannerist frescoes depicting the military triumphs of the commissioning patron, the notorious soldier of fortune Ascanio della Corgna. When you’ve had your fill of the charming town make sure to head down to the shores of the lake itself, flanked by olive groves and cypress trees, where you’ll be left to contemplate life in the company of the resident bird population. For hiking enthusiasts, the Via del Trasimeno is a beautiful 160km walking path that circumnavigates the lake. If you’re feeling adventurous then consider a trip out to the lake’s two islands: tiny and unspoiled Isola Polvese, whose densely wooded interior is a haven for wildlife, and the fishing village on Isola Maggiore, once a favourite retreat of Saint Francis himself.