Lazy Days in the Alban Hills: 7 Towns in the Castelli Romani You Should Visit 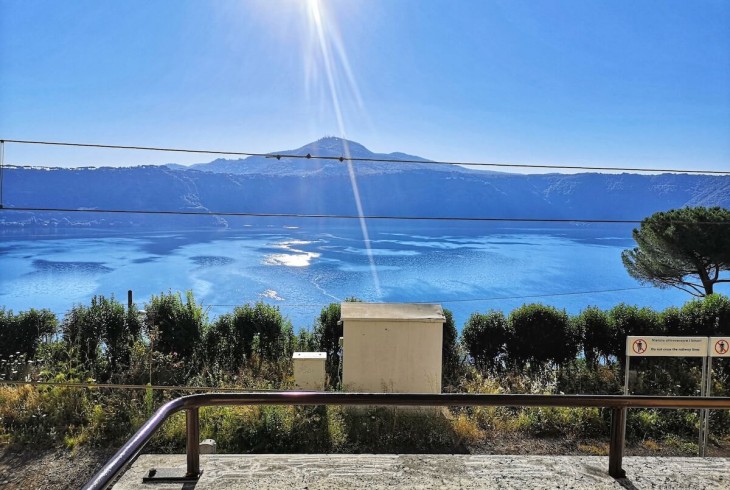 Ask any Roman where they’re most likely to head when they fancy taking a gita fuori porta (a day-trip out of town) on the weekend, and you’ll very probably hear numerous references to the Castelli Romani. The Castelli are a series of charming hill towns dotted about the landscape of the Colli Albani, or Alban Hills, a short distance to the south of the Eternal city. This volcanic landscape has been occupied since antiquity, and was once the preserve of the Latini tribe before the burgeoning Roman civilisation made their mark on the area. 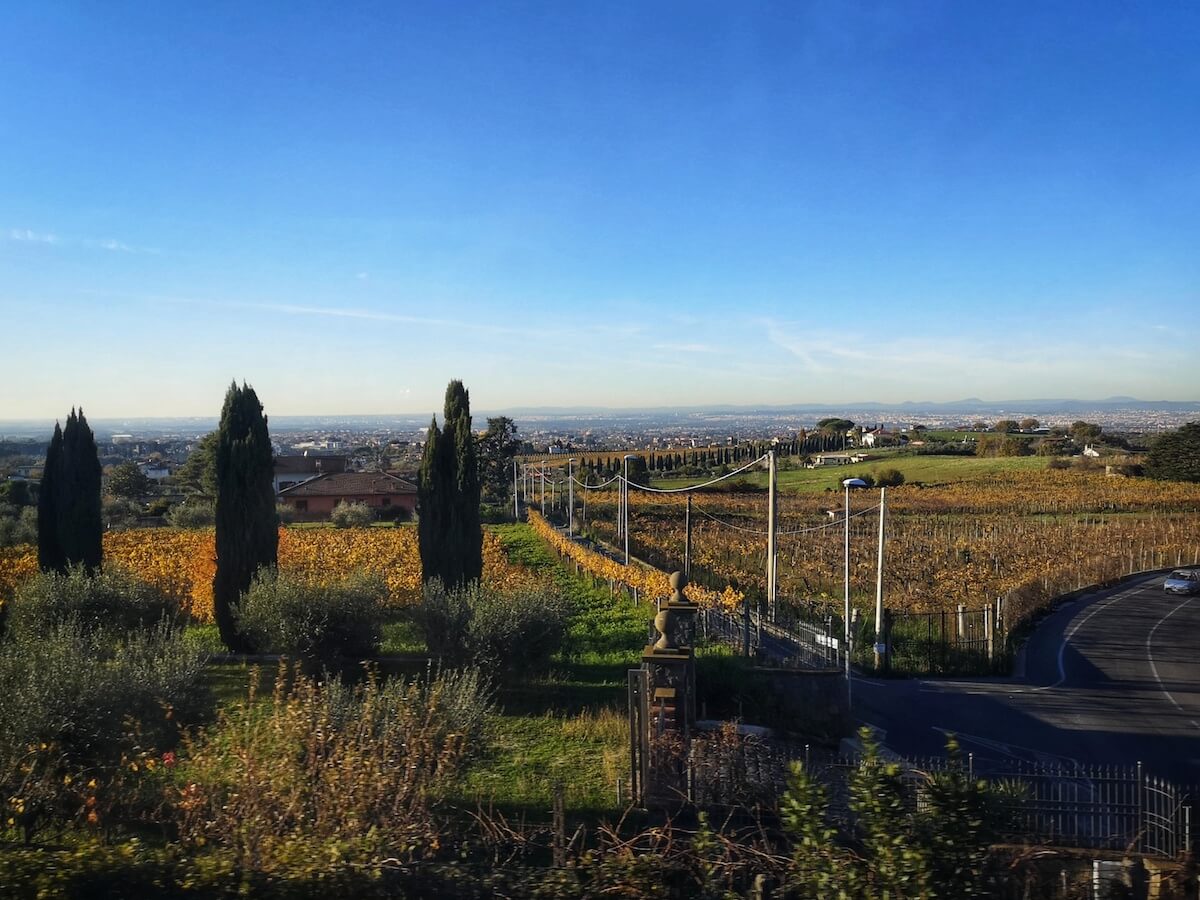 These days the region is home to a 10,000 hectare national park, two crater lakes and some lovely unspoiled towns where zero-kilometre local cuisine is king - most notably the mouthwatering must-try roast pork specialty porchetta. Be sure to wash it down with copious amounts of the local wine, produced here since antiquity thanks to the mineral-rich volcanic soils. Easily reached from Rome in as little as half an hour by train, car or bus, find out which towns you need to visit in the Castelli Romani with our guide to 7 our our favourites! 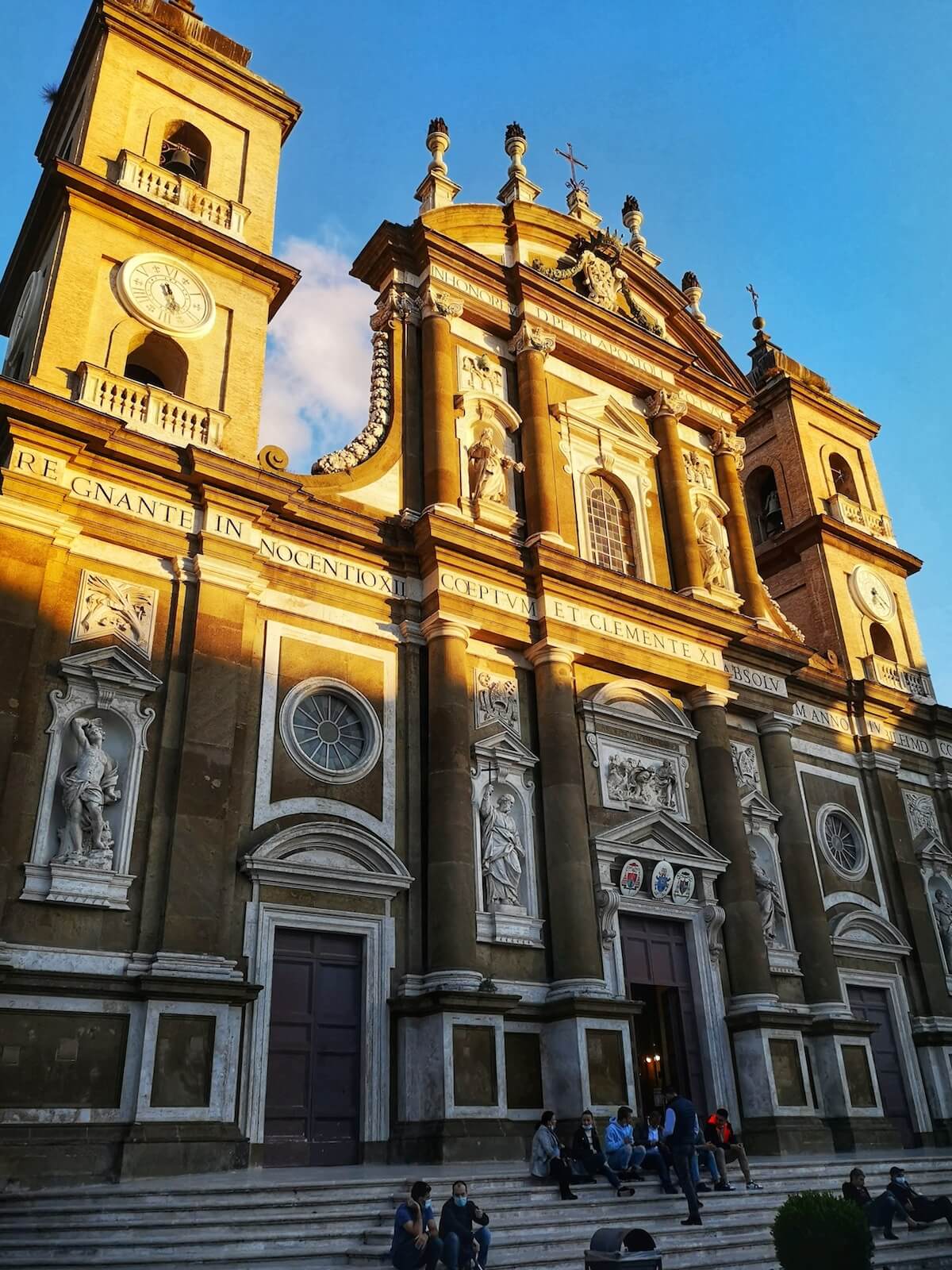 The largest and perhaps most impressive of the Castelli Romani, historic Frascati is dominated by the spectacular baroque Villa Aldobrandini, the grandiose 17th-century summer palace of Pope Clement VIII. 400 years later and Romans are still following the Pope’s lead, flocking to the elegant town in order to escape the capital city’s notorious summer heat. Villa Aldobrandini was designed by Giacomo della Porta and boasts impressive landscaped gardens which are occasionally open to the public, as well as a former stables (the Scuderie Aldobrandini) that now houses a local museum. 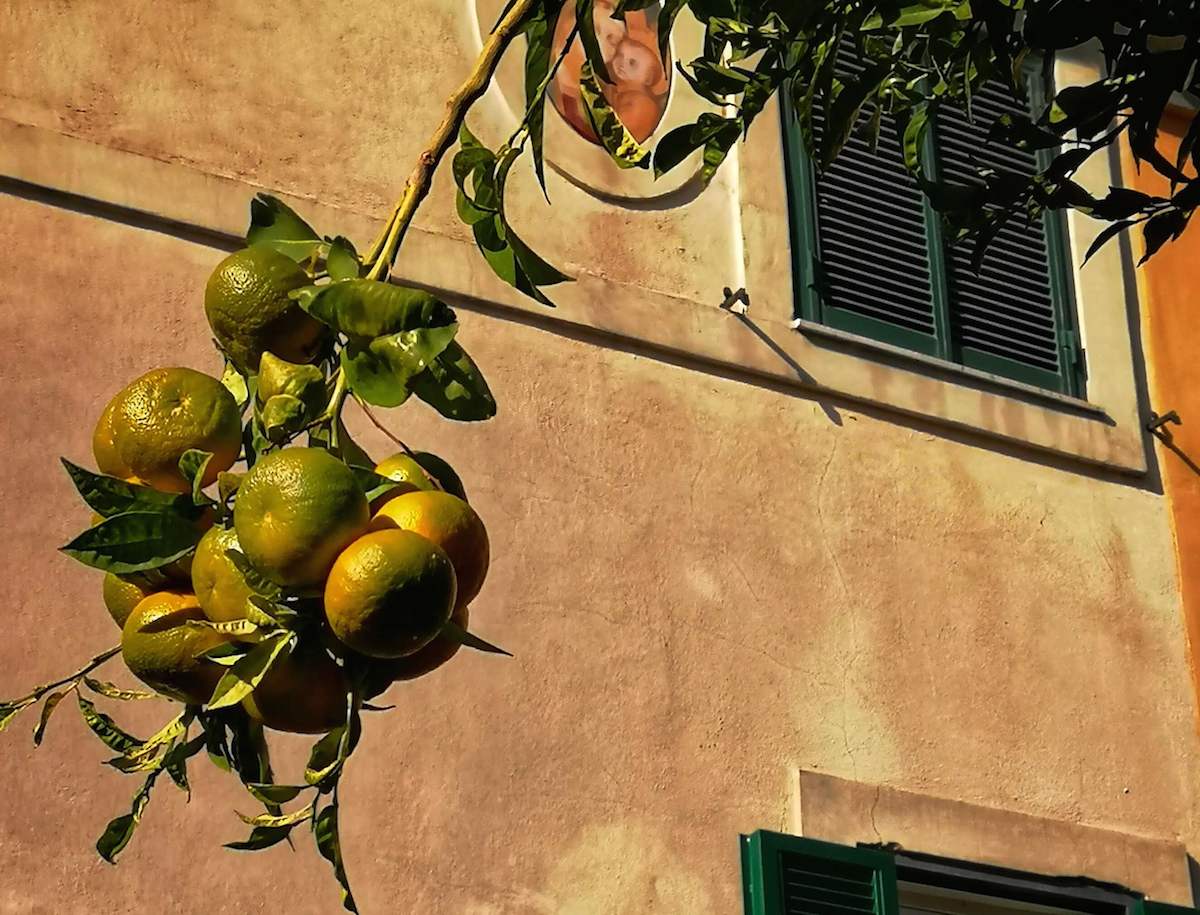 The real pleasure of Frascati, though, lies in aimlessly wandering through the town’s tangled lane-ways and lively squares on a lazy Sunday afternoon, living out the cherished Italian ideal of il bel far niente - the idle joy of doing nothing. For a little slice of culture along the way pop in to Girolamo Fontana’s striking Baroque cathedral, unlikely final resting place of the heart of  18th-century pretender to the English throne Bonnie Prince Charlie.

When hunger strikes, make your lazy way to Piazza del Mercato, where simple stalls dish out heaping piles of porchetta to hungry passersby. Order a few slices along with some good crusty bread and tangy pecorino before heading to a traditional fraschetta (wineshop) such as l’Osteria dell’Olmo to enjoy your haul alongside a litre or two of the local Frascati white wine (if you’re feeling lazy, don’t worry - host Remigio will be happy to provide some local antipasti if you arrive empty-handed). 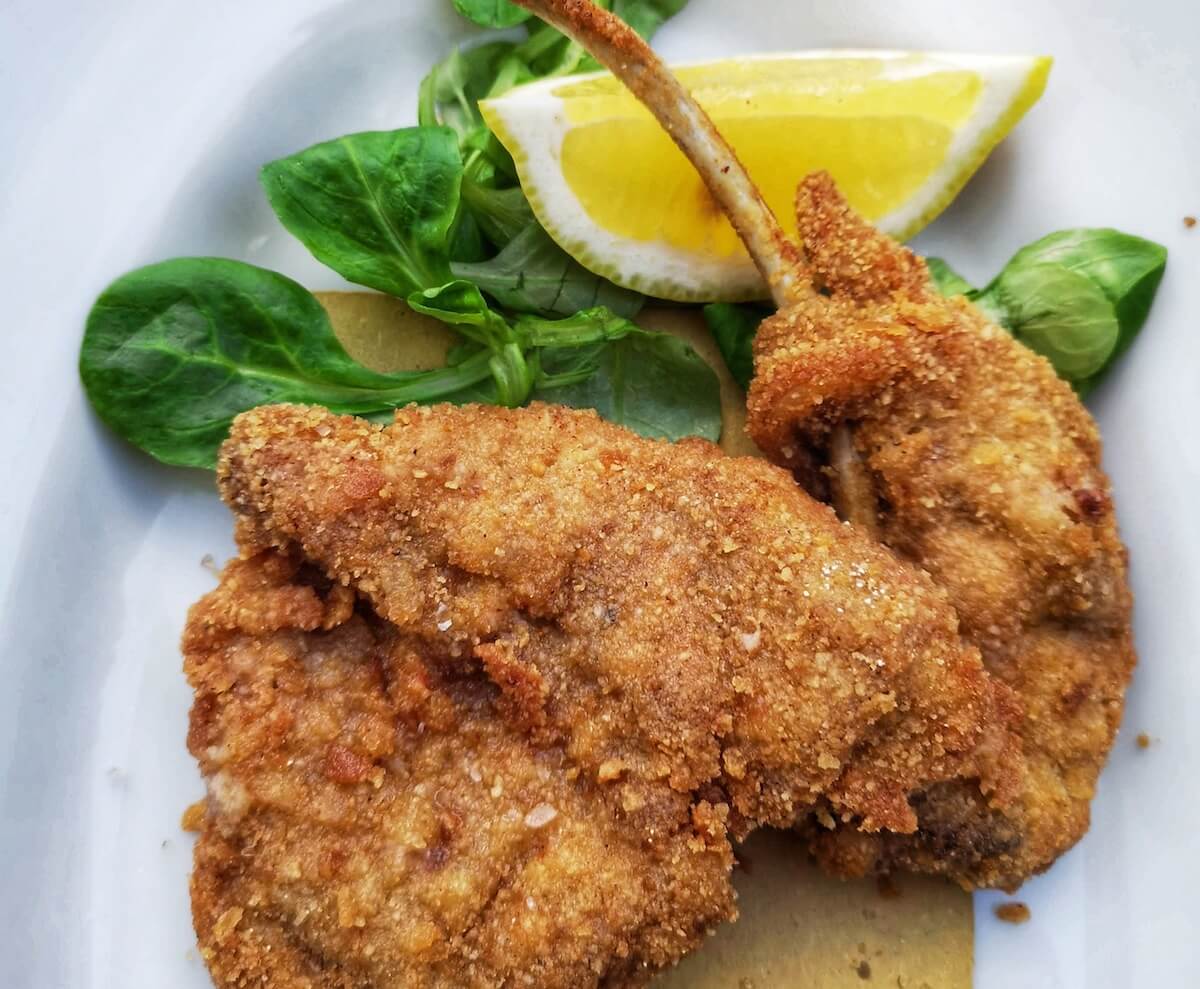 Those looking for something a bit more elaborate should head to Cantina Simonetti, a charming restaurant specialising in local cuisine and zero-kilometre ingredients like breaded grilled lamb. After lunch be sure to join the evening passeggiata, which with any luck will lead you to the bustling bars on Piazza San Rocco for an aperitivo before heading back to Rome. 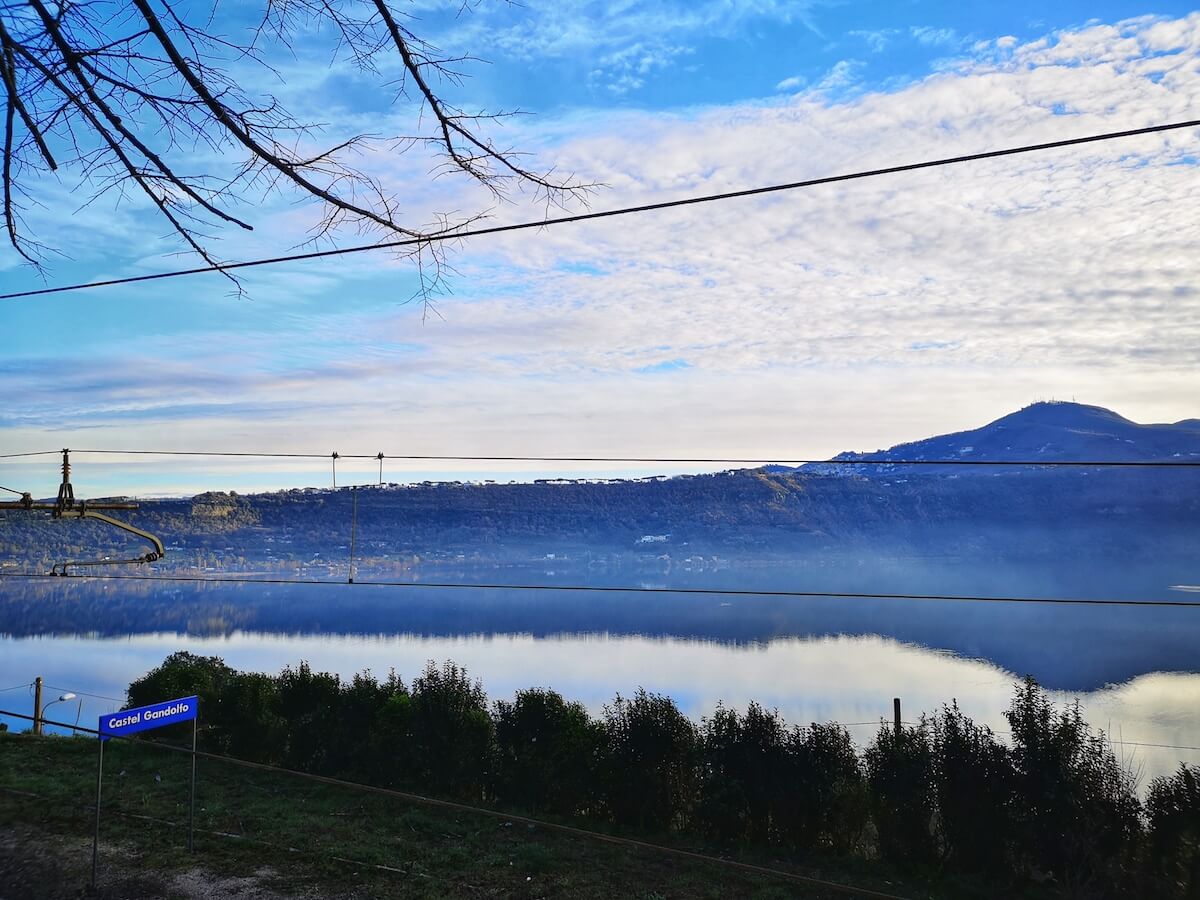 Perched picturesquely above the icy pure waters of the volcanic crater lake Lago Albani, tiny jewel-like Castel Gandolfo is best known for the magnificent Palazzo Apostolico, where for centuries the popes traditionally enjoyed their summer vacations. Luxury-shunning Pope Francis has bucked the trend, but the immaculately maintained gardens of Villa Barberini are open to the public and justly draw thousands of visitors each year. 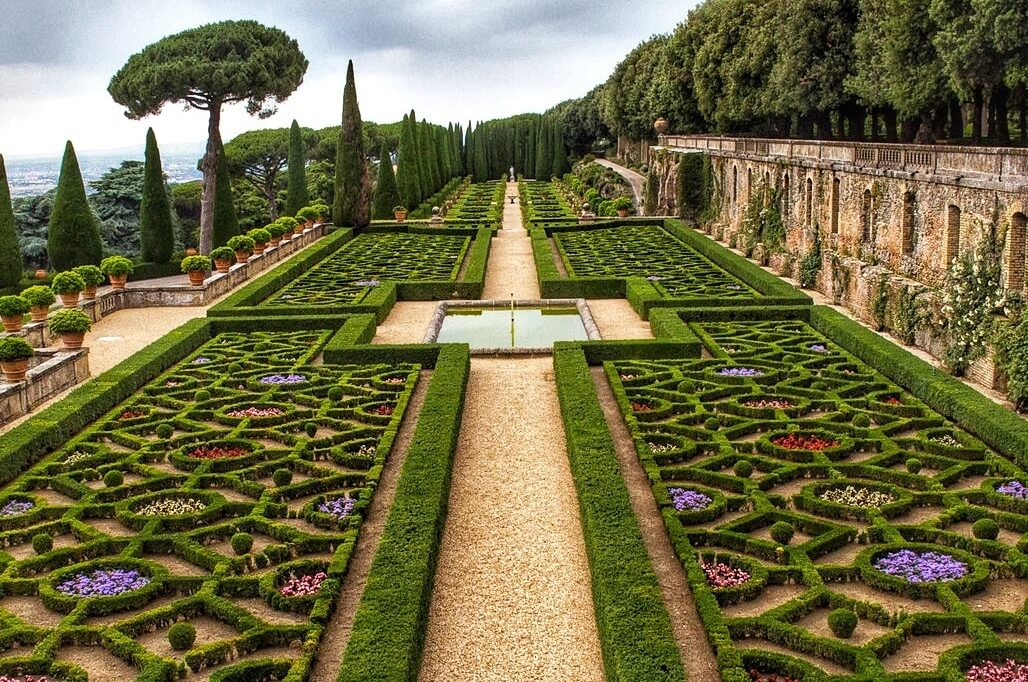 Other highlights in Castel Gandolfo include the Bernini-designed cathedral and fountain located in the town’s main square, as well as numerous trails around the lake below the town offering plenty of good hiking opportunities for nature lovers. 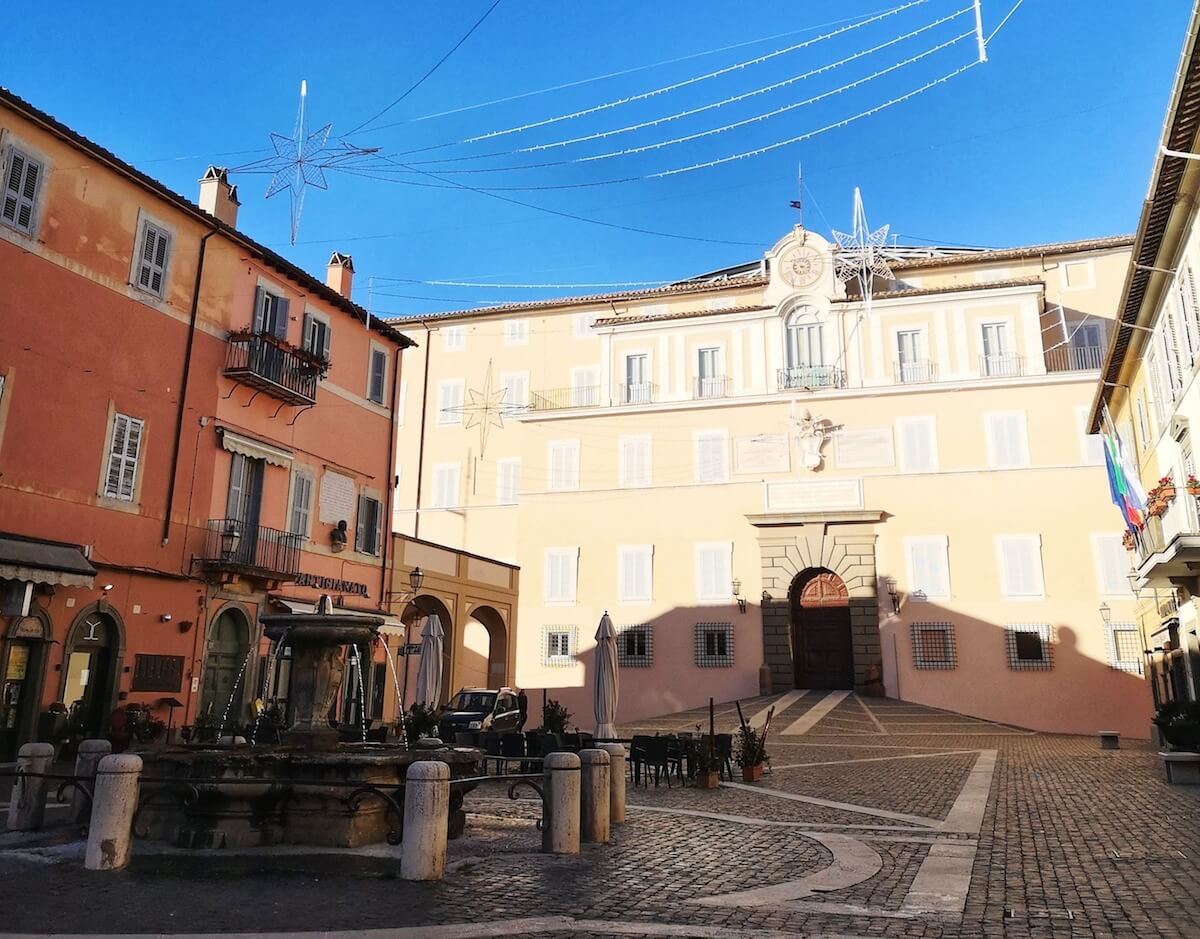 If you’re planning on staying for lunch (and why not!) an array of tempting options line atmospheric Corso della Repubblica. Our favourite is Hosteria La Fraschetta di Padre in Figlio, where generous portions of local staples like cacio e pepe (cheese and pepper) pasta will keep you going for the ride back to Rome. 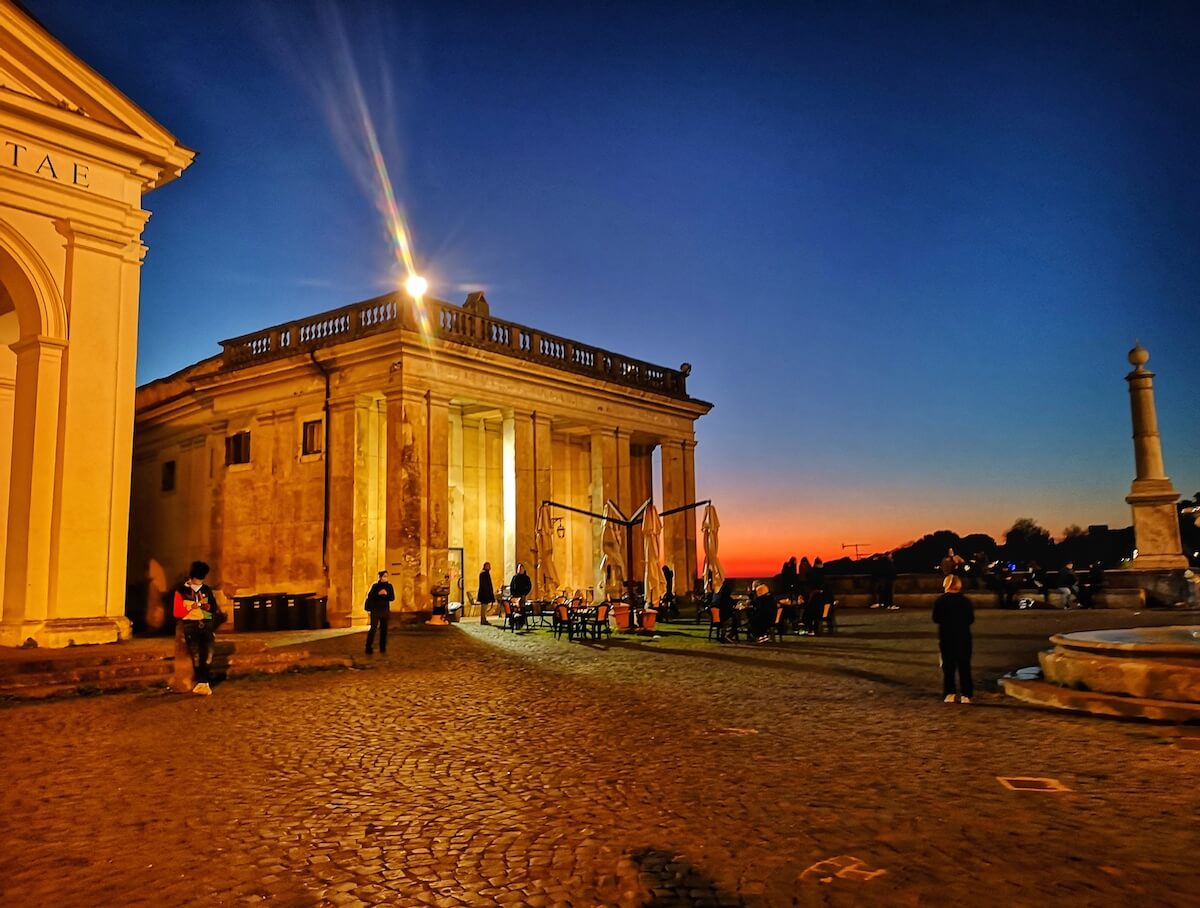 Spectacularly sited on an escarpment of tufa rock surrounded by oak forests, to reach Ariccia you need to cross the 300 metre long Ponte Monumentale, a testament to 19th century engineering that crosses the abyss 60 metres below on three levels of arches. The charming town’s central  Piazza della Repubblica is once again home to two architectural masterpieces by Baroque artist Gianlorenzo Bernini - Palazzo Chigi and the Collegiata Maria SS. in Cielo, a church whose central plan is inspired by the Pantheon. 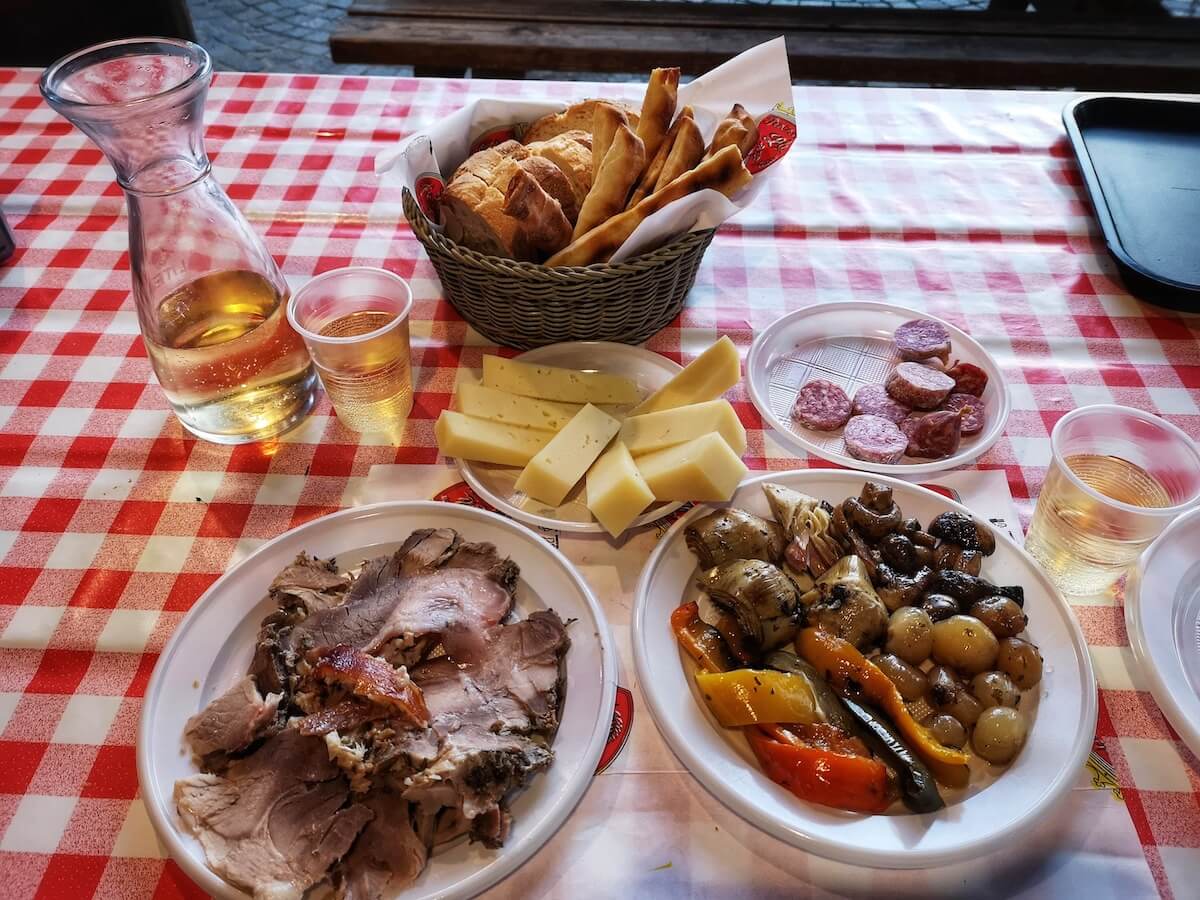 Ariccia’s claim to fame though, is as spiritual home to porchetta, the otherworldly roast pork that stands as culinary symbol of the Castelli. Order a few slices from Porchetta Diana Aricina or Porchetta Cioli on Piazza di Corte for an unbeatable on-the-go lunch, or follow the locals down winding Borgo San Rocco and take your pick of the brilliant no-frills eateries that line this atmospheric street.

Our favourite is Fraschetta Osteria Dar Vignarolo, where trestle tables scenically scattered beneath the viaduct of the Via Appia Nuova offer spectacular views across the countryside far below. Platters of local antipasti, porchetta, pasta and hearty meat dishes await. 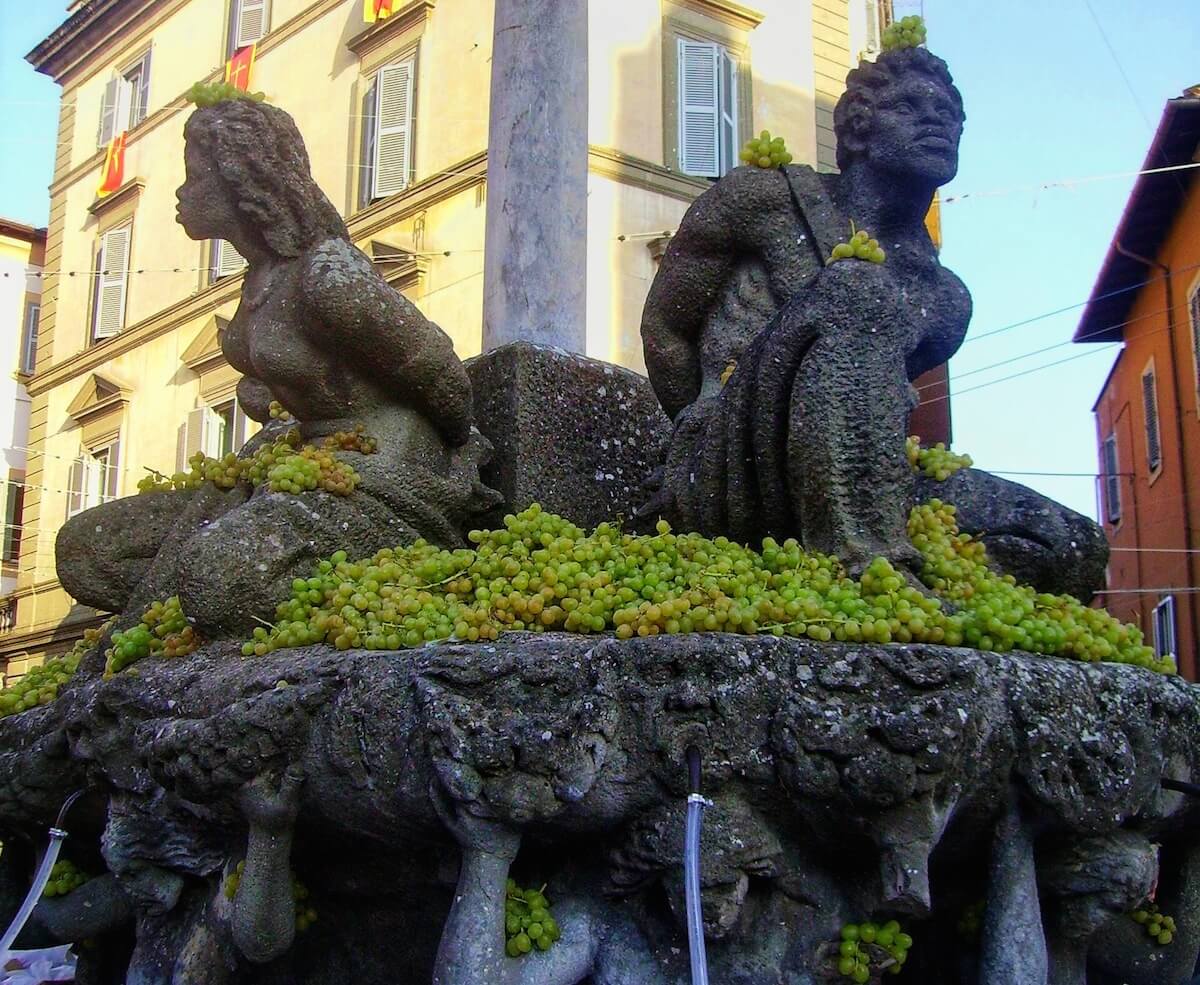 The Castelli Romani are widely known for their wine, and nowhere is this ancient oenological tradition more apparent than in the town of Marino. Each October the townsfolk gather to celebrate their famous Sagra dell’Uva (Festival of the Grape) - local producers set up shop in the cobbled streets of the town’s historic centre, where statues and fountains are festooned with great swaying bunches of grapes. Best of all, for a glorious half hour at the height of the festivities, the town’s fountains run free not with water, but with wine. So important is viniculture to the local economy that over the centuries a miraculous 12th century effigy of the Virgin Mary housed in the town’s cathedral has frequently been called upon to ensure a decent grape harvest. 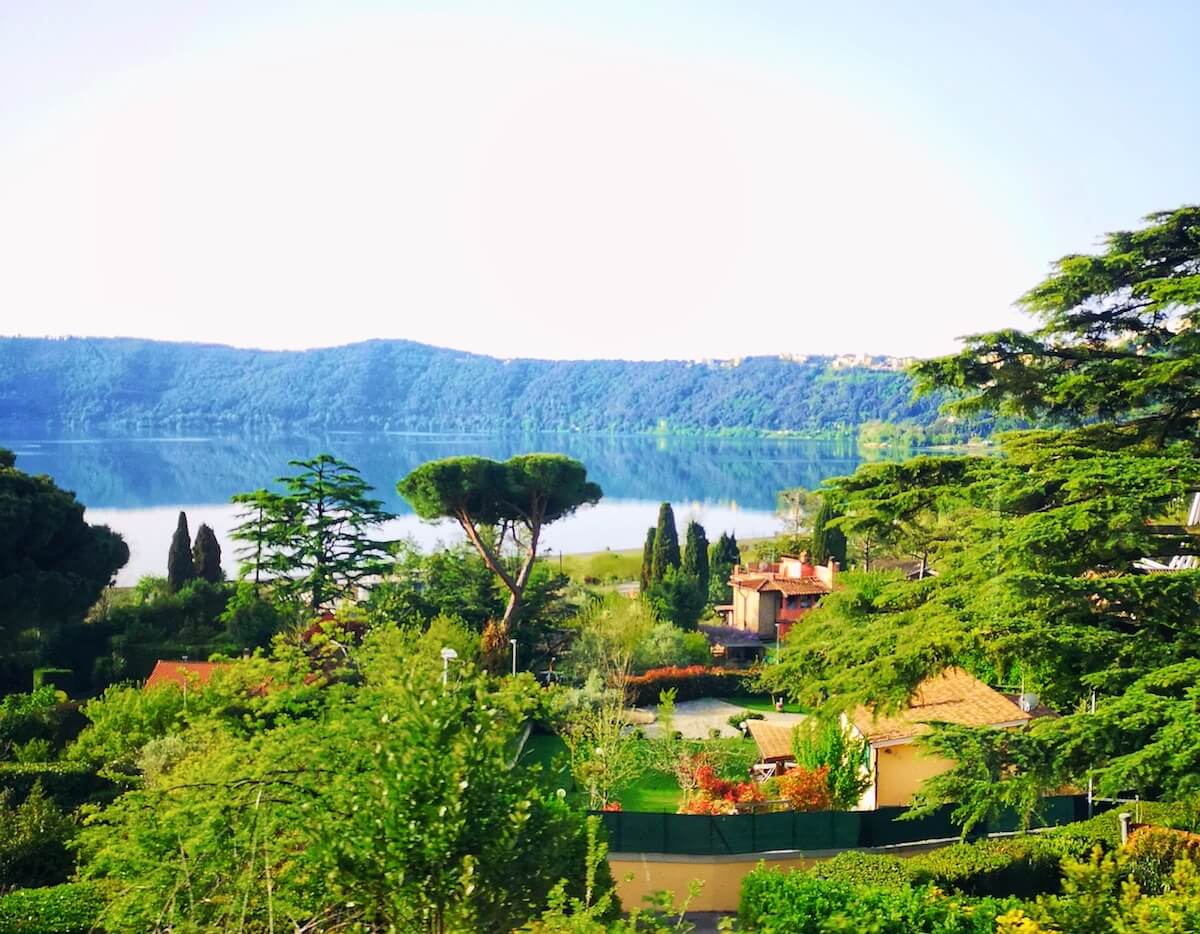 Even if you’re not in town for the festival, Marino’s historic centre is well worth a visit in its own right - the highlight is the Fontana dei Quattro Mori – the Fountain of the Four Moors  - erected in the town back in the 17th century to celebrate the defeat of the Turks at Lepanto by local hero Marcantonio Colonna. 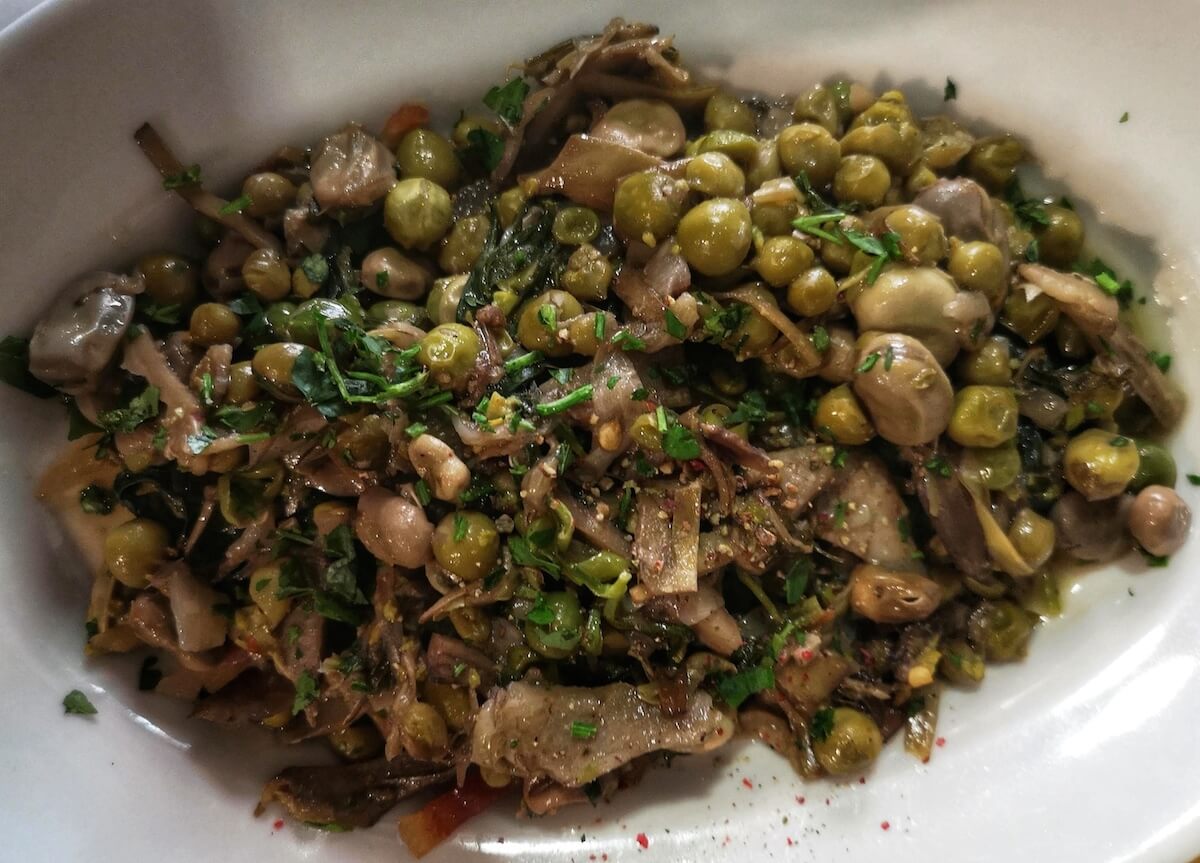 For lunch make a beeline for the charming courtyard garden of Al Cantuccio, where home-made pastas like pappardelle with wild boar ragù and strozzapretti with zucchini, cherry tomatoes and smoked provola as well as veggie delights like scarola with pine nuts and raisins are star turns. 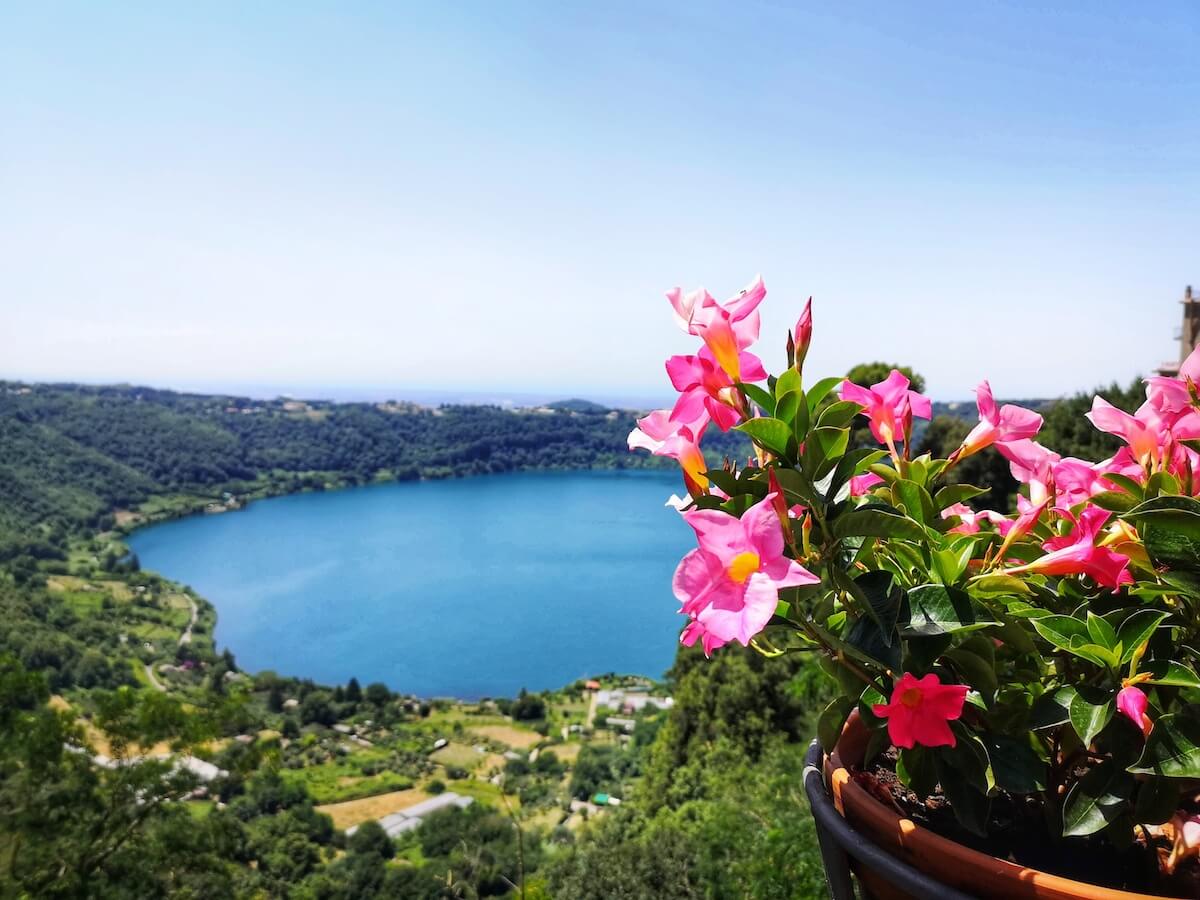 Boasting wonderful views over the Roman countryside from its perch high above the lake with which it shares its name, beautiful Nemi is one of the Castelli’s must-visit destinations. The tiny historic centre is a character-filled tangle of narrow streets unfolding around imposing Palazzo Ruspoli and the adjacent piazza. Besides the spectacular panoramas, Nemi’s real draw is the local variety of strawberry: smaller than your average fragola, these little gems are bursting with flavour and can be sampled at any of the shops and restaurants populating the borgo. Each year a festal devoted to Nemi’s fragoline marks the highpoint of the season’s harvest. 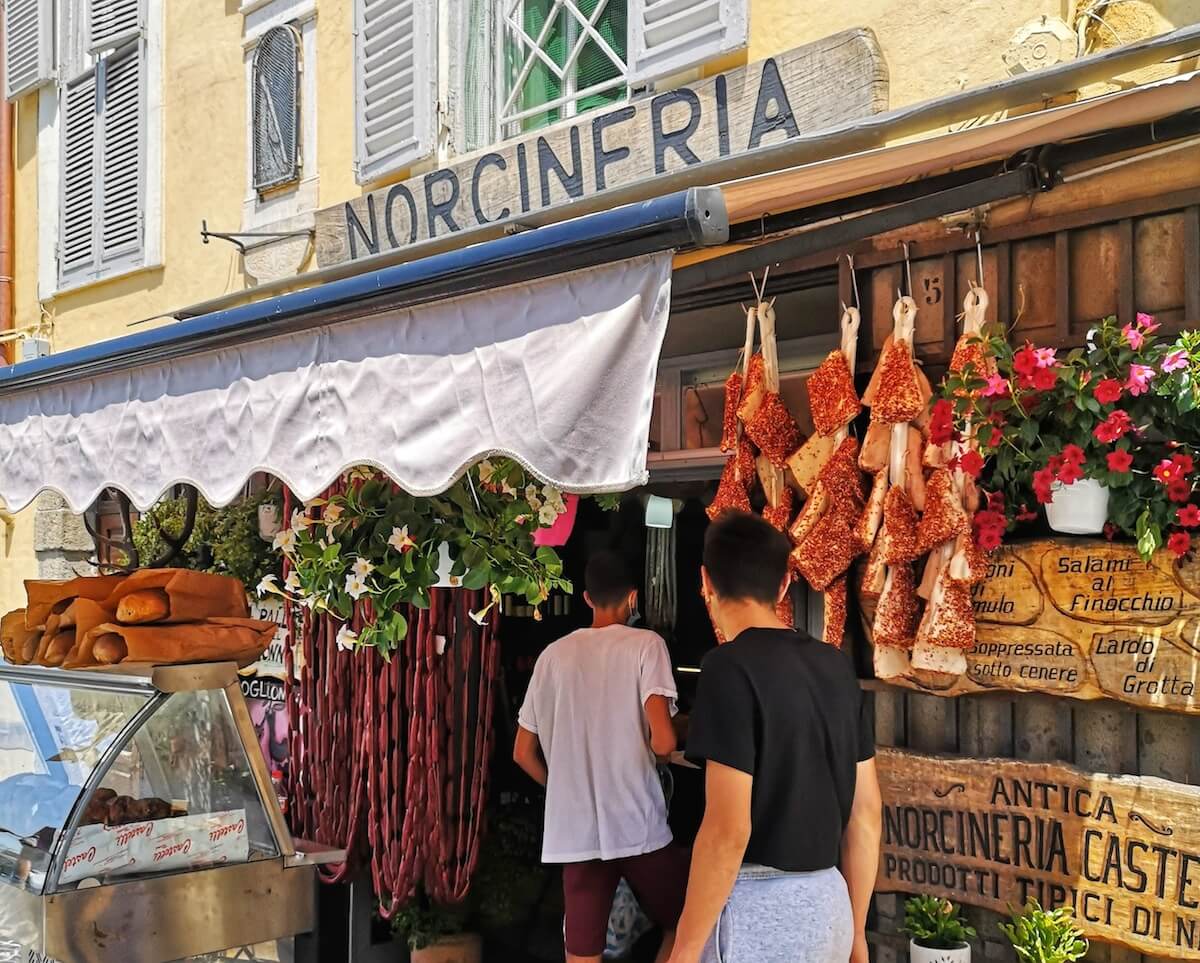 Not to be missed whilst you’re in the area is Nemi’s historical ships museum, where the remains of the incredible pleasure barges built by emperor Caligula and recovered from depths of the lake are displayed alongside ancient sculptures and artefacts. 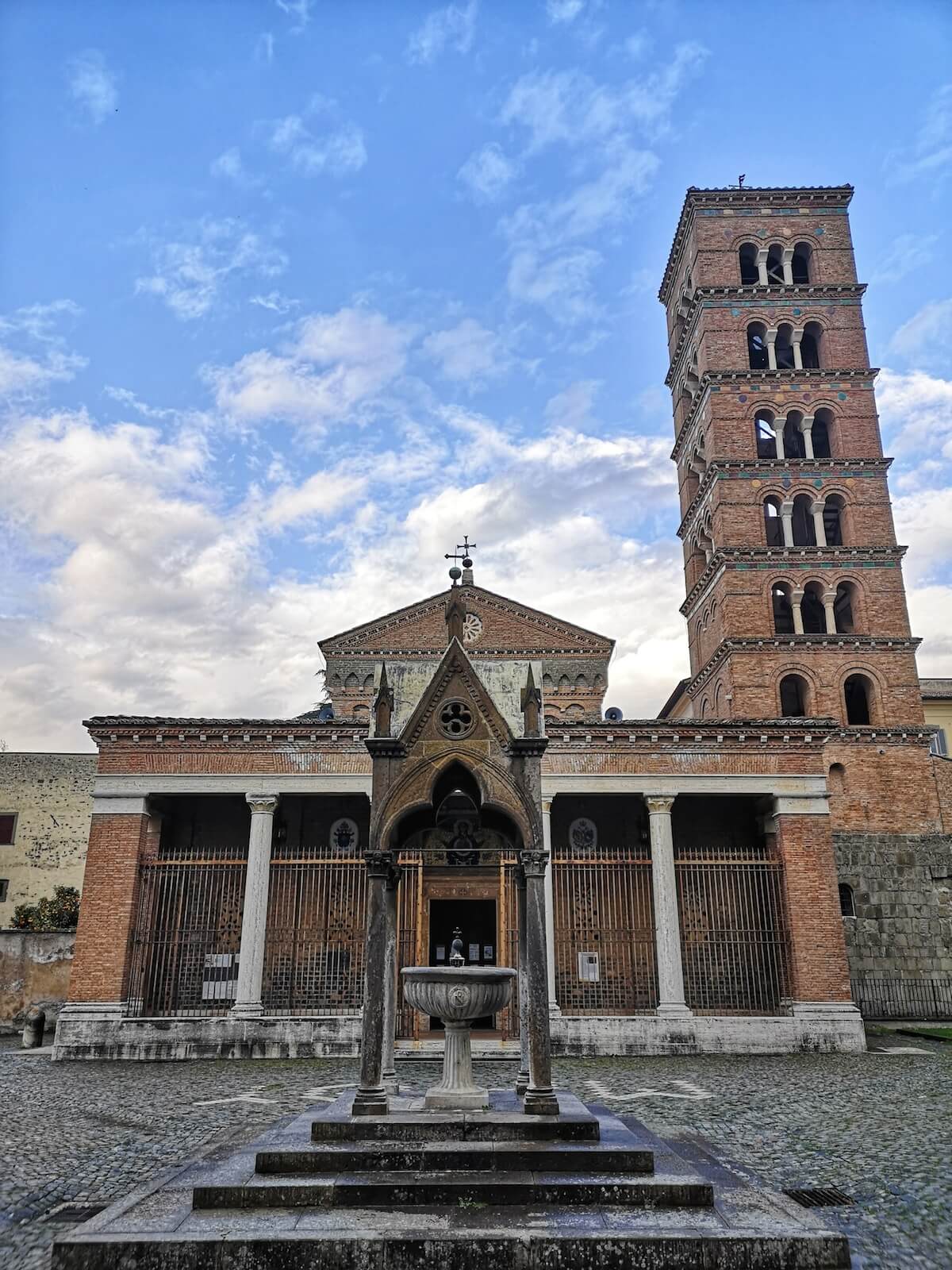 Grottaferrata is one of the least visited of all the Castelli by visitors, but thanks to its extraordinary medieval monastery of San Nilo it’s one of our favourite easy day-trips from Rome.  The monastery was founded in 1004 AD by a charismatic wandering Calabrian monk named St. Nilus of Rossano. Remarkably, the exarchic abbey is the last monastery in Italy that still practices Byzantine Greek religious rites instead of the Latin ones.

This was surprisingly common in Lazio and southern Italy in the Middle Ages, but the abbey at Grottaferrata now feels like it's from another world. Founded 50 years before the great Schism divided Christianity between East and West, the monks at San Nilo didn't pick a side and still today practice a unique brand of Christianity that merges the two traditions.

No less impressive is the architecture - the beautiful courtyard and portico leading up to the monastery was designed by the renowned Renaissance architect Antonio da Sangallo in the 15th century, whilst magnificent Baroque frescoes by Domenichino lie in wait in a chapel within. The adjacent monastic museum is also worth a visit, featuring beautiful frescoes and ancient artefacts in the atmospheric surroundings of the monastery. 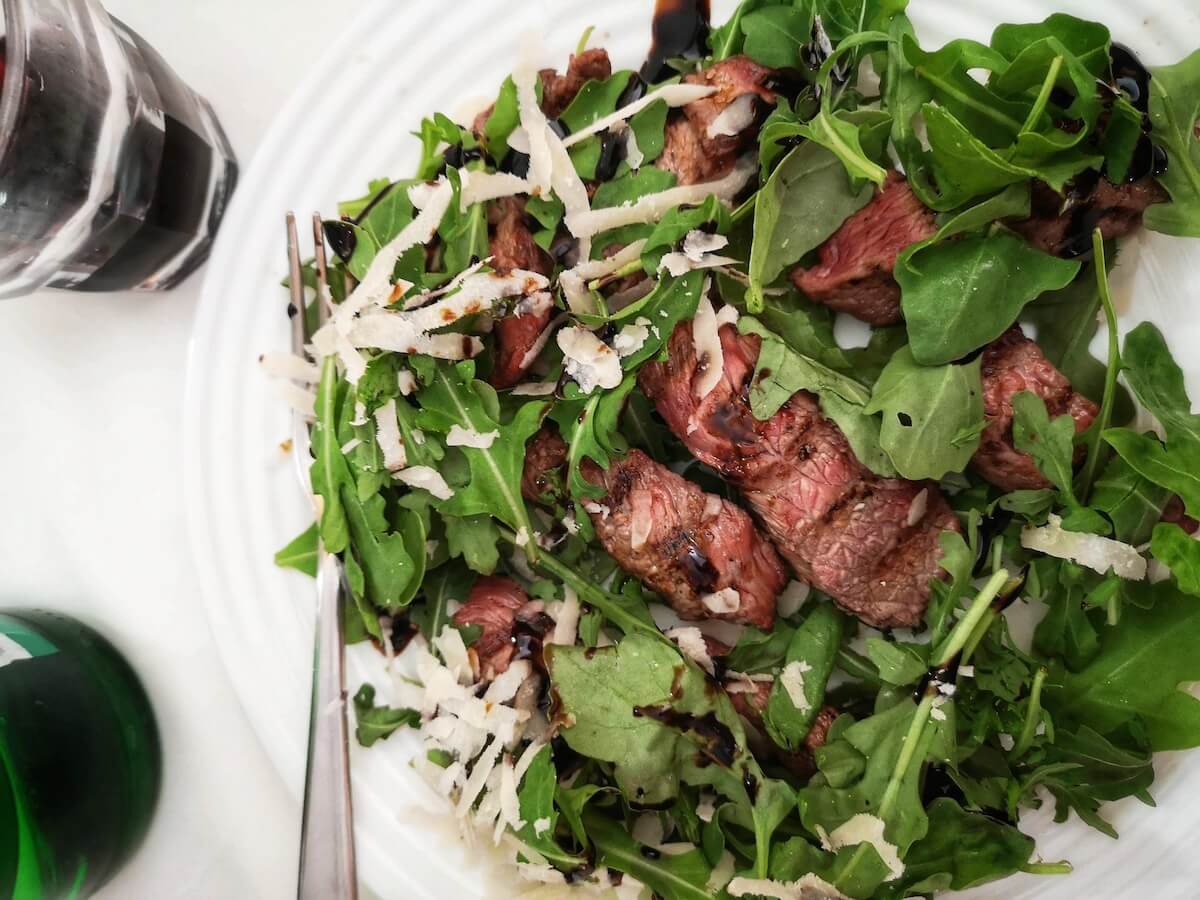 After a morning spent exploring the fabulous monastery, head to Al Buco for lunch - think ravioli stuffed with pumpkin and truffle, tagliata di manzo with porcini mushrooms and much more at unbeatable prices.

Soaring 680 metres above sea level, picturesque Rocca di Papa is visible for miles around thanks to its colourful dwellings clinging to the slopes of Monte Cavo. Rocca di Papa owes its name to the  medieval papal fortress that dominates the town, whilst the town’s Duomo dell’Assunta contains some interesting artworks - including a gender-bending Christ.

But it’s the magnificent views over the entire region all the way to Rome and the distant sea beyond that make Rocca di Papa well worth a detour. Make the climb up the ancient Via Sacra leading out of town, whose Roman basalt flagstones are still preserved even today, and you’ll reach the viewing point known as the Occhialone, where a spectacular panorama opens up before you with both Lago Albani and Lago di Nemi visible at once.

We hope you enjoyed our guide to the Castelli Romani and whetted your appetite for your next visit to Rome! Have you been to the Castelli? Which of the towns is your favourite? Drop us a line on our Facebook page and let us know!