9 of the Best Parks in Rome 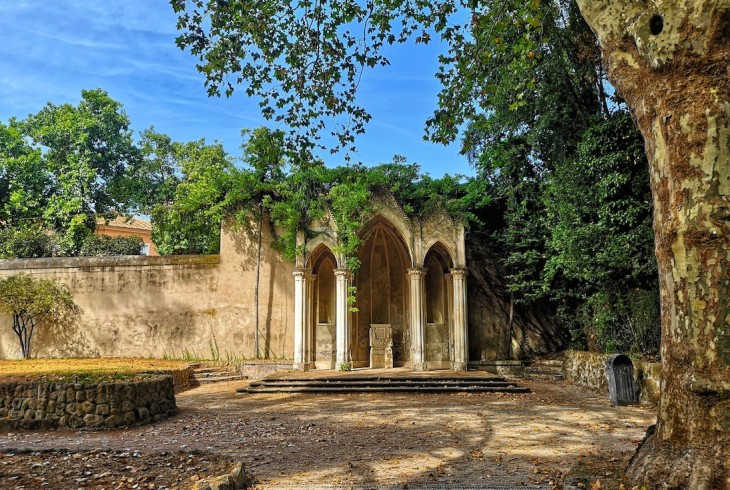 Every major city is synonymous with its great public green spaces. New York has Central Park, whilst London boasts of Hyde Park and Regent's Park. Parisians head to the massive Bois de Boulogne to take a load off, whilst the lucky denizens of Dublin get to chill out in the Phoenix Park - Europe’s largest urban green space. But for sheer variety and class of urban parks, Rome might just have them all beat. The Eternal City is so amply endowed with public parks within the city limits that it's one of Europe's greenest cities. They're the perfect place to while away those long and lazy summer afternoons, when the thought of hitting another museum just seems like too much effort. Read on for our selection of our favourite parks in Rome! 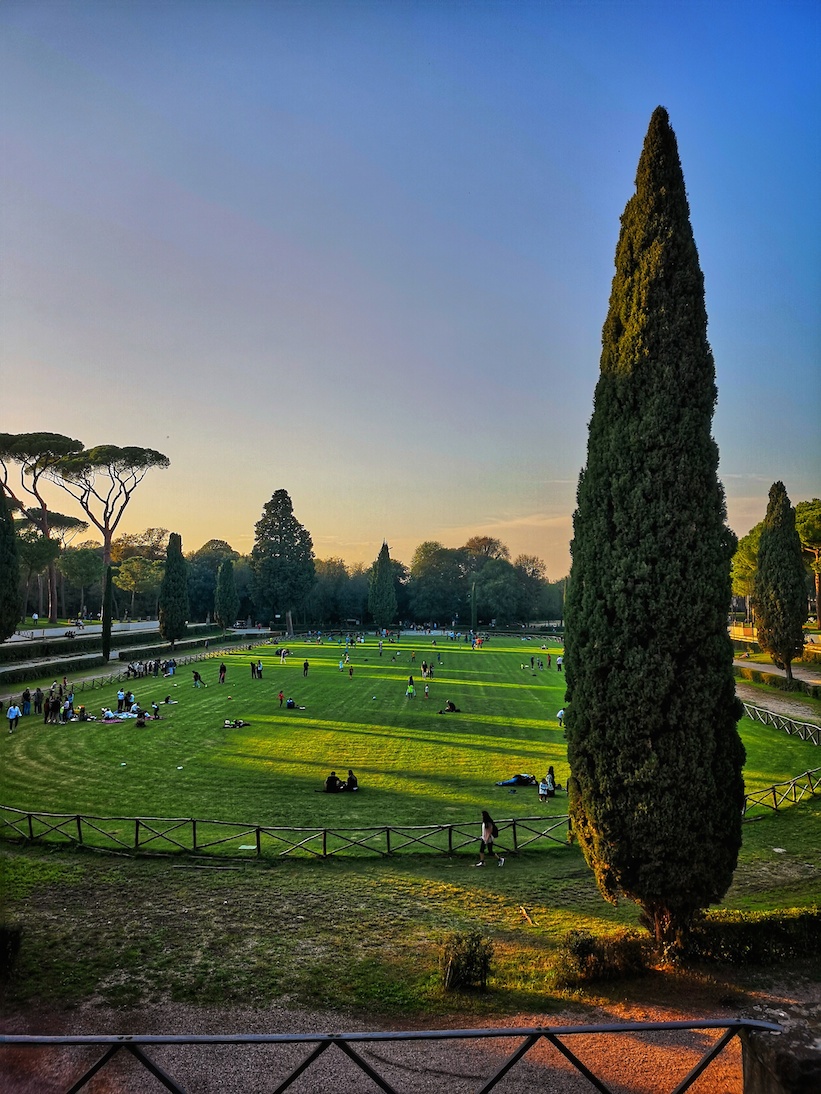 When it comes to parks in Rome, the Villa Borghese is the undisputed jewel in the crown. Located right in the heart of the city with access from Piazza del Popolo, the Spanish Steps and Via Veneto, the park began life as the grounds of the all-powerful Papal nephew Cardinal Scipione Borghese’s luxurious urban villa in the opening years of the 17th century. Borghese’s goal was to create the largest gardens complex seen in Rome since the heady days of the Roman Empire, and what he and his architect Flaminio Ponzio came up with proved more than a match for the ancients.

These days it’s a haven for locals and visitors alike, with tree-lined avenues and shady clearings, magnificent fountains, a boating lake overlooked by a faux-ancient temple, a small hippodrome that hosts equestrian events every May, an outdoor cinema and, of course, one of the world’s finest art galleries. This is the Eternal City at its spectacular best, the the perfect spot to while away some lazy hours away from the bustle of the city.

Despite covering all of 80 hectares, the Villa Boghese isn’t Rome’s largest park. That accolade goes to the scarcely less impressive Villa Doria Pamphilj, which spreads out atop the Janiculum hill  to the west of the Tiber, high above the bustling quarter of Trastevere far below. A patchwork of elegant formal gardens and picturesque wildernesses, fountains and lakes, the park is dominated at its centre by the magnificent Villa itself. The palace and its spectacular maze garden were laid out in the 1640s on the orders of the powerful Pamphilj family, who drafted in the famous sculptor Alessandro Algardi and the architect-painter Giovanni Francesco Grimaldi to bring their vision to fruition. Opened to the public in the 1970s, today the Villa Doria Pamphilj is a jogger’s heaven and a picnicker’s paradise. 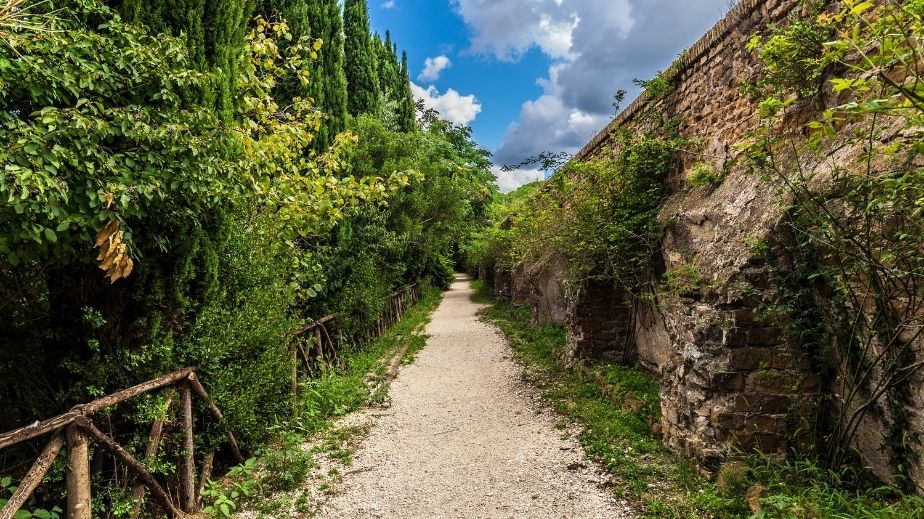 Often overlooked due to the imposing presence of the immense Villa Doria Pamphilj a little further up the hill, the diminutive Villa Sciarra is an elegant jewel-box of a park set in the former grounds of the Colonna di Sciarra’s family estate, and became a public park in 1932. An oasis of tall and shade-bearing pines, the Villa Sciarra is best known for its series of finely-sculpted 19th-century fountains depicting mythological subjects. Plentiful benches set amongst the trees and fountains means there’s always a spot where you can sit to watch the world go by, and the views across Rome from up here are pretty stunning, too. 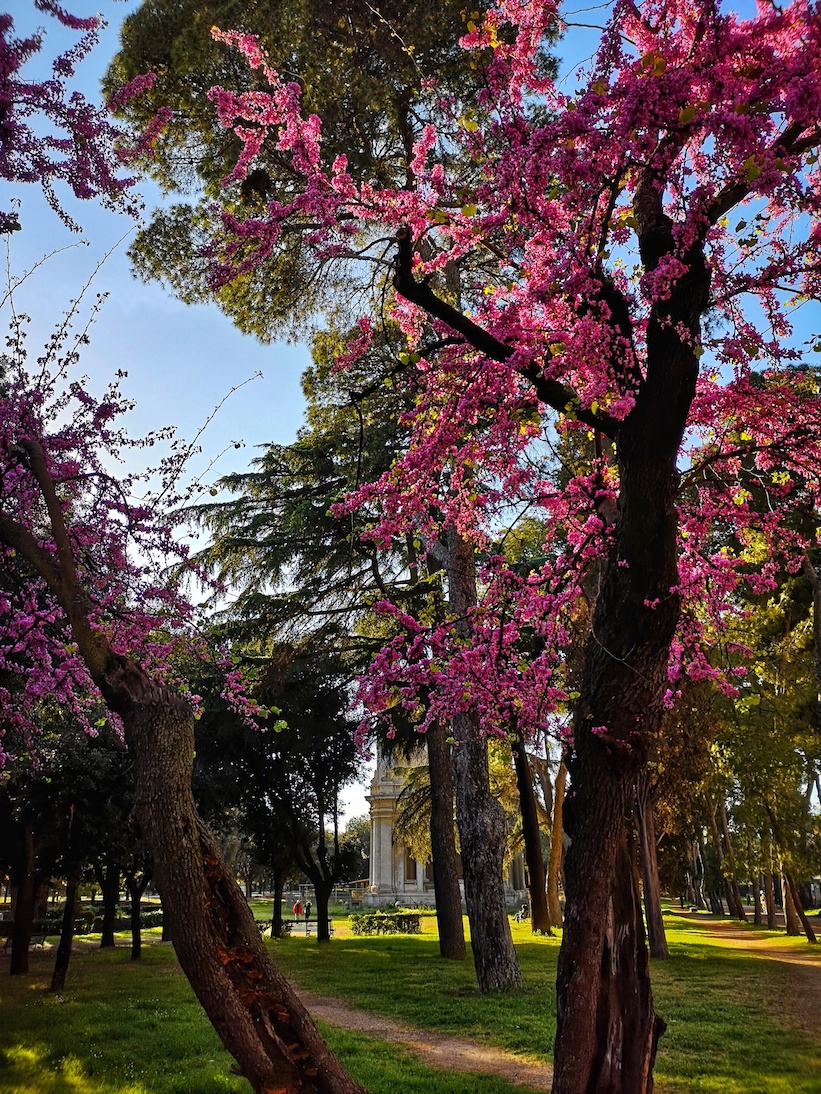 An oasis of swaying pines and palm trees, home to spectacularly exotic architecture, pink granite obelisks, and even a bunker belonging to Benito Mussolini during the second world war, the endlessly fascinating Villa Torlonia is full of surprises. The park and spending Neoclassical villa at its centre were built for the fabulously wealthy banker Prince Giovanni Torlonia in the early years of the nineteenth century by the architect Giuseppe Valadier, but it was the prince’s successor (another Giovanni) who really elevated the Villa to one of Rome’s most enduring spaces when he had the whimsical Casino delle Civette built on the family estate. A whimsical and fantastical reimaginign of a medieval building complete with turrets, stained glass and crenellations, the owls that give the building its name crop up everywhere in its decorations and are testament to the prince’s mysterious and occult philosophical leanings. Located in eastern Rome, Villa Torlonia is well worth a detour from the city centre! 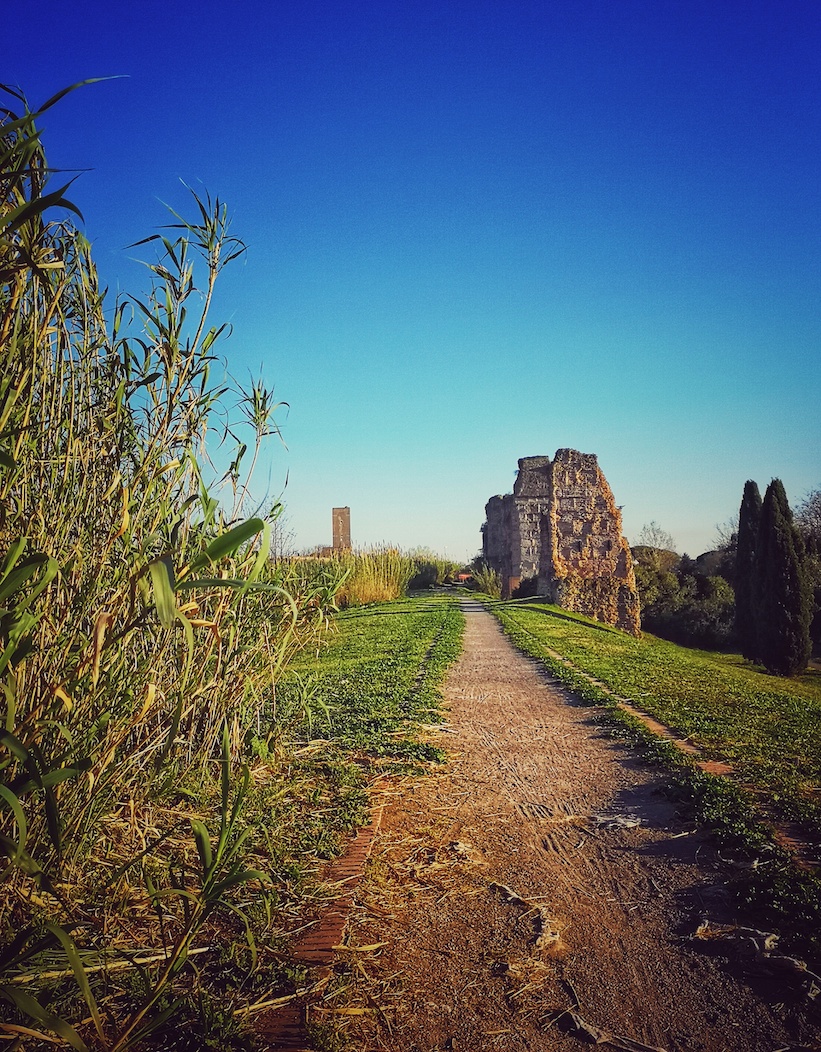 One of Rome’s most under-appreciated parks, this hidden gem in the southern outskirts owes its name to the imposing medieval tower that sits at its centre. Highlights include a magnificently preserved section of ancient Roman aqueduct splitting the park in the two, a Renaissance acqueduct, numerous ancient tombs and more. Stop off at the interesting Casale Museum before you go, and sample some zero-kilometre fare from the restaurant which uses ingredients grown on site.

The rustic and extensive Parco della Caffarella in southern Rome seems lost to time, its serene landscapes drawn straight from the contours of a painting by Nicolas Poussin or Claude Lorraine. An enticing admixture of fascinating classical ruins and pastoral beauty, the Caffarella is located just off the ancient Appian Way. Look out for ancient Roman tombs, an extraordinary 2nd-century nymphaeum dedicated to the water-nymph Egeria, a columbarium (an ashes depository) transformed into a medieval mill, an ancient cistern and much more. Long protected from development by city ordinance, you’ll come across shepherds still tending to their flocks here amidst the archaeological remains, a working farm that’s changed little in centuries, plus an array of flourishing fauna and flora that belies the fact that you’re still in the urban heart of the Eternal City! 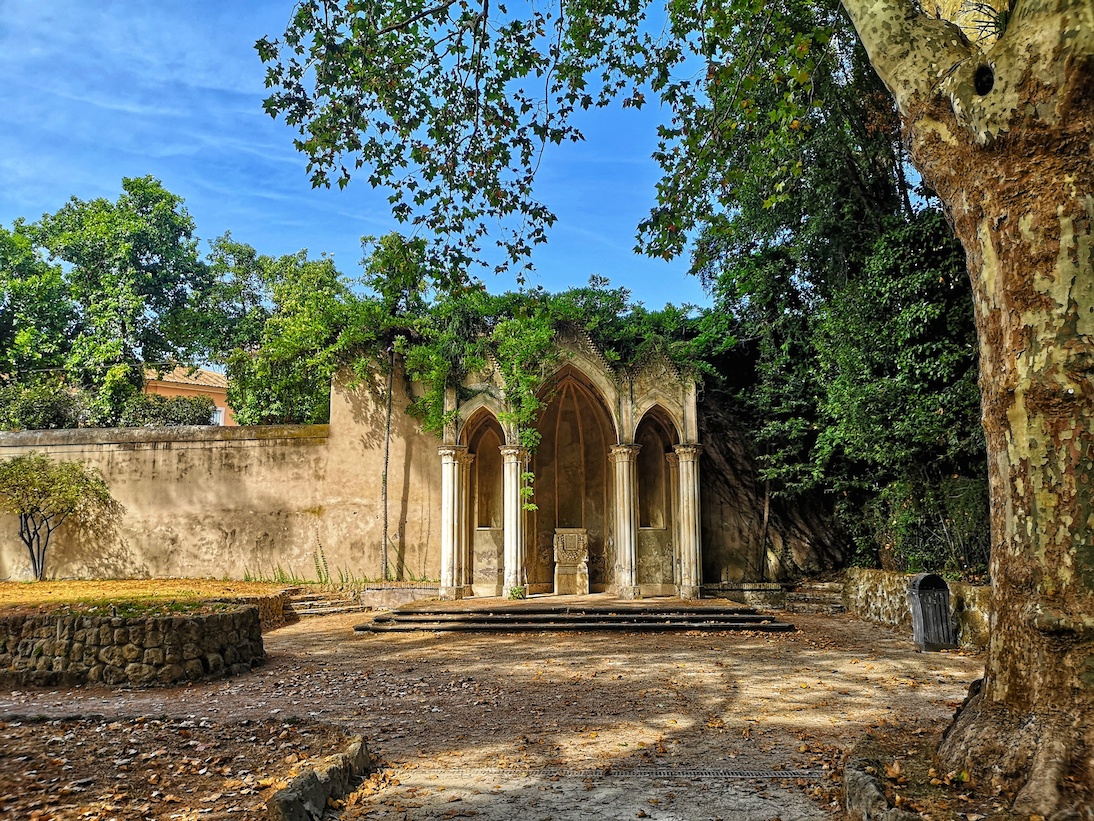 Located on the slopes leading down to the valley separating the Celian and Aventine hills, the Villa Celimontana boasts a chequered story dating all the way back to antiquity. Back in the first century AD this was where the Roman vigili - firefighters and police officers - had their headquarters, and ancient legend recounts that the Roman king Numa Pompilius met the water-nymph Egeria here: she would became his divine consort, and instruct him in the laws and rituals that would lead to the establishment of Rome’s social order. In the Renaissance the site had become a vineyard, before being transformed into a luxurious villa by the Mattei family in the 1580s. These days the Mattei villa is home to the Italian Geographical Society, and the leafy grounds populated by fountains, sculptures, ancient ruins and gardens offer a welcome respite from the summer heat. Don't miss the beautiful little neo-Gothic temple, built to the orders of Baron Hoffman in 1880 - it's one of our favourite architectural surprises in the Eternal City! 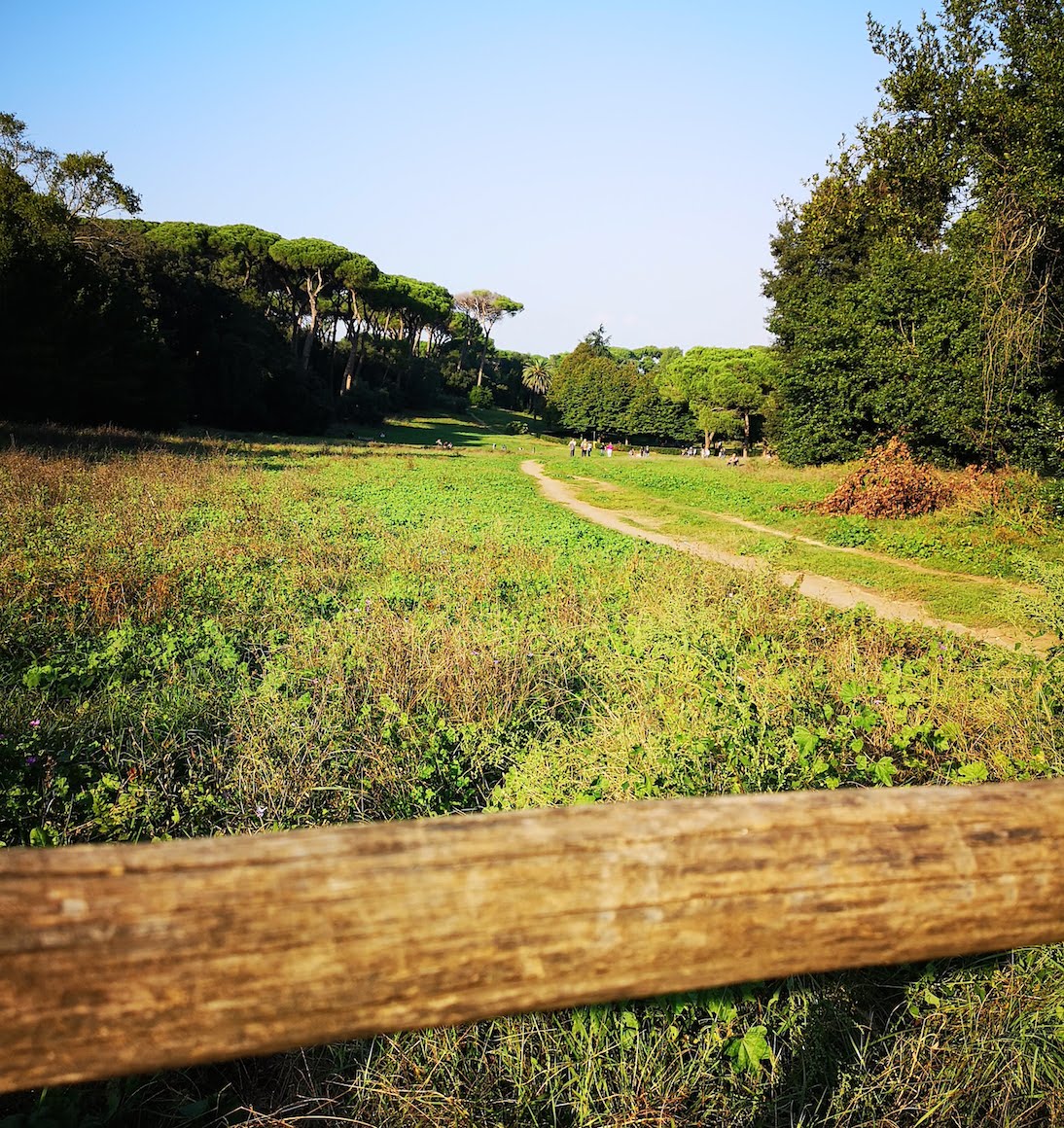 The picturesque and semi-wild Villa Ada began life as the private estate of King Vittorio Emmanuele III, and its 160 acres of woodland, hills and plains still retain something of the shaggy hunting reserve it once was. Home to some fascinating romantic ruins hidden deep in the wooded foliage, the Ada is the ideal park to head to if you want to forget all about city life. Every summer the park plays host to the Roma Incontro il Mondo festival, when the Ada is transformed into a month-long outdoor concert venue. Oh, and if you’re wondering who Ada is, she was the beloved wife of the Swiss aristocrat Count Tellfner, who briefly owned the estate in the late-nineteenth century.

If you go down to the woods today...Hidden deep in the wilderness of Rome's fantastic rustic city park Villa Ada, the ruins of an imitation ancient Greek temple rise from the undergrowth. The neoclassical Villa Flora was created at the end of the 1700sfor the powerful Pallavicini family. Today it's a fascinating and little visited ruin far from the tourist crowds, the perfect place for some peaceful contemplation on a Sunday afternoon! #througheternitytours #througheternityrome #visititaly #rome #villaada 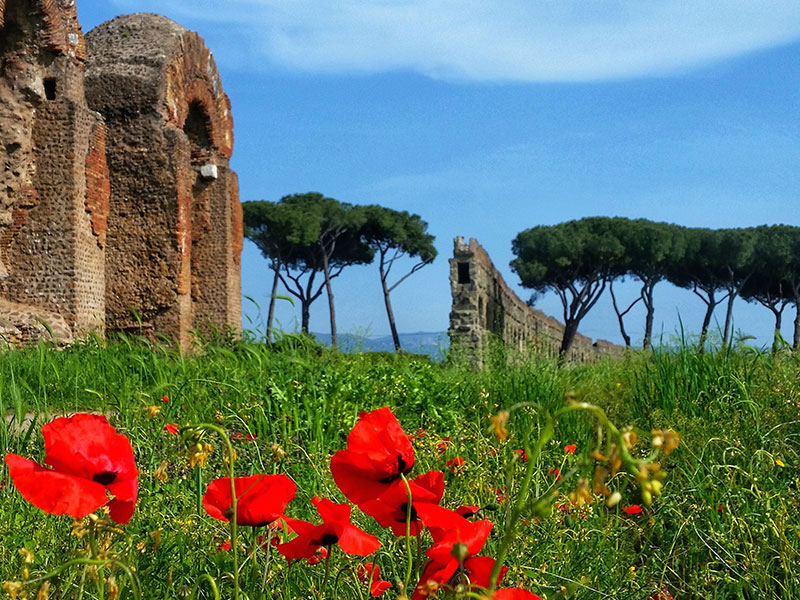 Where the monuments of man meet nature…Nestled in the city’s southern outskirts, the magnificent Parco degli Acquedotti features dusty tracks winding though the remains of fantastically well preserved ancient aqueducts, brooding with the silent grandeur of the classical world. Sunsets here are to die for, when the imposing Claudian aqueduct (built by Caligula to bring life-giving water to the ancient world’s greatest metropolis way back in 38 AD) is bathed in tangerine light framed by soaring Roman pines swaying in the breeze. Justifiably proud of these extraordinary testaments to Roman engineering, the ancient water commissioner Frontinus asked “will anybody compare the idle Pyramids, or those other useless though renowned works of the Greeks with these aqueducts, with these many indispensable structures?” in the first century AD - take a trip out to the Parco degli Acquedotti and you’ll see just what he meant!