Crypta Neapolitana: the legend of Virgil’s Tomb through the centuries 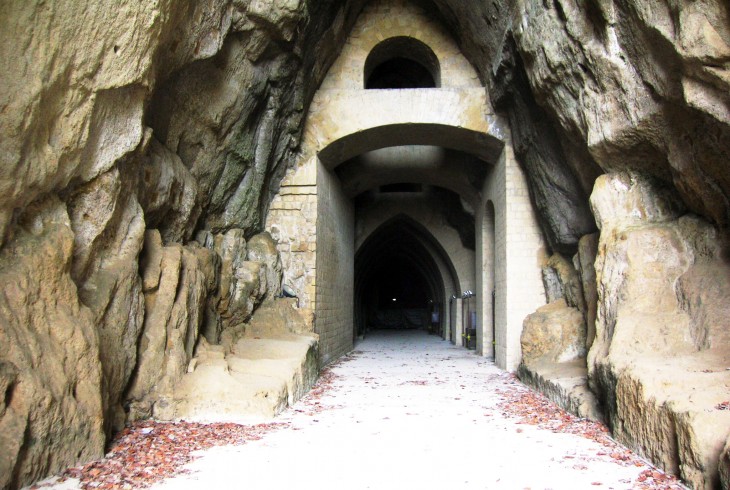 Thirty-something years before the era of Christ, noted poet, tour guide and part-time sorcerer Virgil fashioned a tunnel through the side of a small mountain. Medieval legend has it that he finished the tunnel in one night. Other records show that an architect named Coccieus Actus was contracted by Octavian and Agrippa to carve of a tunnel that would connect Naples to the Via Domitiana and the Appian Way, so that the roman emperor would have infrastructure stretching straight up to Rome. Legend has it that Coccieus took a bunch of nights to finish it.

This tunnel, known as the Crypta Neapolitana, is located in the Piedigrotta area of Naples. Piedigrotta, meaning “the foot of the grotto,” is located in the chic seaside neighbourhood of Mergellina with its seemingly infinite riviera and panoramic view of the gulf. It’s no wonder why Coccieus’s superiors wanted easy entry. The moon like a pizza pie above a glass sea. Spaghetti with clams. Sophia Loren. Who knows how long Octavian had been planning a weekend trip to Naples?

The entrance of the tunnel itself is reminiscent of something found in the Lord of the Rings—a mysterious cave stretching across some twenty-three hundred feet, with varying heights, reaching one hundred feet at its tallest. From a distance, the entrance looks like a giant keyhole whose door could lead you to another time and place all together. With the ancient supports shaped like a colossus ribcage, it begins to feel as if you are walking through the innards of a dinosaur. It’s sibylline form gives to the legends and lore.

In the fourteenth century during Boccaccio’s Neapolitan sojourn, he visited the ancient tunnel. It is said that he felt Virgil’s presence at the entrance and he had no doubt that it was the home of Virgil’s Tomb. Aside from practical travelling reasons, the Crypta Neapolitana became a noted tourist destination on account of it being Virgil’s (metaphoric) resting place.

The legend of Virgil’s Tomb made the pagan crypt became an important destination in Naples, especially for artists. It became a haven for writers seeking inspiration due to its ties to ancient Rome’s most prolific poet and later to Boccaccio, Dante and Petrarch. Artists’ devotion to the tomb continued through the ages, despite efforts from the church to combat the pagan tomb by erecting a church below the entranceway.

In 1939, a hundred and two years after the death of Giacomo Leopardi – one of the country’s most all-time celebrated poets after the likes of Virgil and Dante – his tomb was moved to the Crypta Neapolitana, solidifying his place amongst the greats of old and securing the tunnel’s legendary status as a place of worship for artists and writers.

In modern times, Piedigrotta has continued to attract artists from across the country. It became home to Naples’ song writing competition—the Festival delle Canzoni Napoletane, boasting the names of some of Italy’s most loved singers, songwriters and musicians (Sergio Bruni, Domenico Modugno, Peppino Di Capri, to name a few). And while the Crypta Neapolitana is no longer a serviceable road connecting Naples to the capital, Virgil and Coccieus’ tunnel has been resurrected as a key archeological site in Naples and remains an easily accessible attraction steps away from the Mergellina train and metro station. Whether you’re trying to write the next great epic poem or you’re just interested in doing an underground Naples tour, the Crypta Neapolitana is no doubt Italy’s best cave.