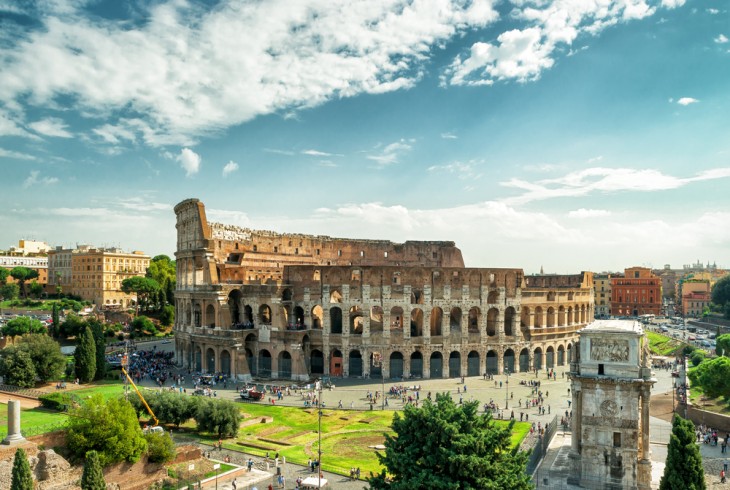 With nearly three thousand years of history, countless breathtaking monuments, and some of the most inspiring works of art in the world, Rome can be an overwhelming experience for first-time visitors. The locals have a saying: Roma, non basta una vita –– Rome, one lifetime is not enough. You could explore the city for weeks and still barely scratch the surface of its immense cultural riches.

Yet among all the amazing sights of the Eternal City, there are a few that stand above the rest; these are the Rome attractions that are not only “must-sees” for every first-time visitor, but also reward repeat visits from the seasoned traveler. For their beauty, grandeur or historical significance they can claim to be the top ten things to see in Rome.

The site of deadly gladiator combat, exotic animal fights and other bloody spectacles, the Colosseum’s powerful history and awe-inspiring architecture have made it an enduring symbol of the city and one of the top destinations in Rome. While the clash of swords and the cheering of crowds are no longer audible, the impressive structure itself still stands as one of the grandest achievements of Roman engineering.

Covering an area of 6 acres and accommodating up to 50,000 spectators, it was the biggest amphitheatre ever built in the ancient world, a physical manifestation of the power of the Roman Empire. Alongside the lions, tigers and elephants slaughtered here, criminals were also publicly and gruesomely executed, including, it seems likely, early Christian martyrs. Recent conservation work has allowed visitors to now go in-depth (literally) with an exclusive visit to the Colosseum’s underground levels.

Three coins in the fountain, each one seeking happiness… Although part of its fame is owed to the Oscar-winning ballad sung by Frank Sinatra, the status of the Trevi Fountain was never in doubt, thanks both to the beauty of its sculptures and its powerful cascade of water: over 55,000 litres every minute.

With such an impressive flow, it’s no coincidence that its architect decided to make the fountain’s central figure Oceanus, the personification of all the seas, driving his marine chariot. The immense basin also attracts a constant flow of visitors, all eager to toss their coins: throw one and you’ll come back to Rome, two and you’ll fall in love, and the third means wedding bells!

3. The Sistine Chapel and Vatican Museums

There is probably no ceiling more famous than the one Michelangelo painted in the Sistine Chapel, and it alone would qualify as one of Rome top ten attractions. This triumph of Renaissance painting is, however, just one of the best-known highlights of one of the most amazing museum complexes in the world: with tens of thousands of artworks, the Vatican Museums have everything from Egyptian mummies to modern art, all housed within historic palaces that are not only fit for a king, they’re fit for a pope.

Much credit for this rich collection goes to Pope Julius II, who not only commissioned Michelangelo for the Sistine ceiling, but also hired Raphael to paint his private apartments, including the famous School of Athens. Julius was also an enthusiastic lover of antiquities, bringing to the Vatican such ancient masterworks as the Belvedere Apollo and the Laocoön. Although many visitors only have time for a brief taste, the Museums’ massive collection also invites a more immersive experience of the Vatican.

4. The Roman Forum and Palatine Hill

The Forum was the living, breathing heart of the ancient city. A large public square, it was a center of politics, religion and commerce, site of some of Rome’s most important temples and seat of the Senate. It also served as the backdrop for some of Roman history’s most dramatic moments, including the funeral of the assassinated dictator Julius Caesar and the famous “Friends, Romans, Countrymen” speech of Mark Antony.

Looming above the Forum (and part of the same archaeological park) is the Palatine Hill, where the emperors made their abode. While only ruins remain of the marble-clad splendor of the imperial halls, the massive remains give a good impression of the vast scale of this place of luxury, intrigue and excess. Of all the remnants of Ancient Rome, these two are among the best things to see to get a taste of antiquity.

At the start of the 1600s, Cardinal Scipione Borghese poured his wealth into an elaborate pleasure-palace; a huge art collector and patron to both sculptors and painters, Borghese filled it with masterpieces, creating an art gallery that is now one of the top things to see in Rome. In addition to the world’s largest collection of Caravaggio and some of Bernini’s greatest sculptures, there are paintings by Raphael, Titian and other masters of the western art.

After filling your soul in the gallery, take a break by exploring the surrounding greenery of the Villa Borghese; what was once the cardinal’s private estate is now a public park. There are fountains, lawns and landscaped gardens, a welcome respite from Rome’s cobblestones. On the weekends Rome’s families come to stroll and the villa fills with musicians and performers.

Although it doesn’t look like much from the outside, the twelfth-century church of San Clemente is one of Rome’s most charming medieval basilicas. The cool, quiet interior is a complete contrast to the crowds of the nearby Colosseum, and space is justifiably famous for its glittering apse-mosaic and intricate floor of colored marble. The real surprise, however, is underneath that floor.

Deep beneath the current church, excavations have revealed the original basilica, built around 400 AD but later abandoned and forgotten. It too is built on even older structures; as you descend deeper underground you travel back in time, ending up some forty feet below the surface amid remains from the early Roman Empire, Nowhere else in the city is a there more powerful physical metaphor for the depth of Rome’s history.

There is only one word that can adequately express the beauty of this building, the grandeur of its proportions and the genius of its engineering: WOW. Built in the early second century AD, the Pantheon is the best-preserved and most creative example of Roman religious architecture. While its precise function is still debated, its name suggests that it was a temple dedicated to all the Roman gods.

Modern visitors, however, are invited to consider not the power of the divine but the achievements of man; spanning over 140 feet, the Pantheon’s dome test the limits of the Romans’ most important invention, concrete, and remains a masterwork of engineering. Yet it is an artistic as well as a practical triumph; the architectural proportions are precisely and harmoniously designed, suggesting that the architect hoped to mimic the perfection of the heavenly spheres.

With narrow streets, boutique shops and hardly any traffic, Trastevere is one of Rome’s most delightful neighborhoods. Its name comes from its location, across (trans) the river Tiber (Tevere) from the historic center. That fact has also preserved its charming appearance; for hundreds of years being on the other side of the river was like being on the other side of the proverbial tracks, so the quarter’s medieval appearance was spared any urban redevelopment.

These days Trastevere is always lively, full of cafes and restaurants as well as plenty of night-life. Beyond the gelato and cocktails, however, there’s also a lot of cultures to explore: Santa Maria in Trastevere on the main square has beautiful medieval mosaics, and the church of San Francesco a Ripa houses a sculpture by Bernini.

Rome has several collections dedicated to ancient art, but far and away the most important one can be found on top of the Capitoline Hill. Framing a square designed by Michelangelo, the Capitoline Museums contain some of the most moving sculptures to survive from antiquity, including one so famous it has become an emblem of the city: the bronze she-wolf suckling the infants Romulus and Remus.

Here you will find statues of goddesses and mortals, heroes and monsters. Scenes from classical mythology play out on the surfaces of sarcophagi, and the galleries are full of Amazons, fauns and centaurs. Most impressive are the many portraits of emperors, statements of power and authority at a time when these men ruled the known world.

Spiritual heart and largest basilica of the Catholic Church, St. Peter’s is a must-see destination for both religious and art-historical pilgrimage. In addition to its many holy relics––the high altar stands above the tomb of Peter himself––the interior is embellished by some of Rome’s greatest sculptures, including the mournful Pietà by Michelangelo.

We should also thank Michelangelo for the impressive architecture of St. Peter’s, although he didn’t work alone. Building the biggest church in Christendom took time, 120 years in fact, so the project was led by a succession of architects, each adding their own inspiration. The last of these was Bernini, the only person who could rival Michelangelo as both architect and sculptor; he designed the elliptical square in front of the basilica as well as much of the interior decoration.

Explore these sights and other top tourist attractions on one of our guided tours of Rome. Already seen all the greatest hits? Check out some of our articles about Rome’s Hidden Sights.