What to See in Siena: A Weekend in Italy’s Finest Medieval City 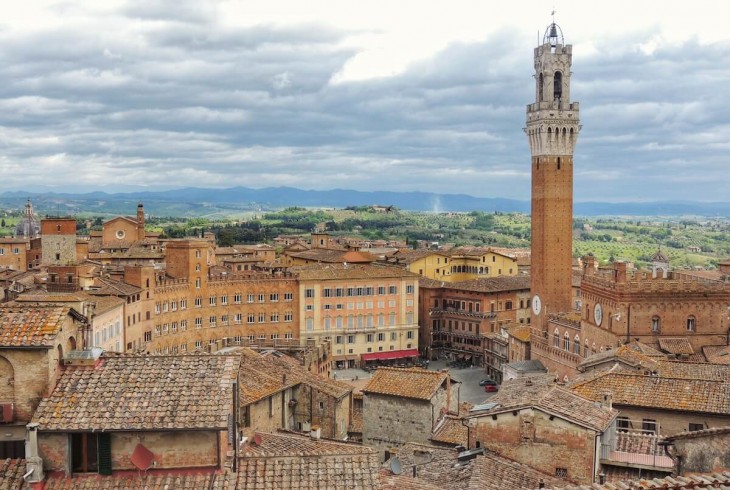 Whilst it might be smaller than Rome, Venice and nearby Florence, enchanting Siena can lay a strong claim to being Italy’s most enduringly fascinating city. Spectacularly sited on a hill overlooking the pristine Tuscan countryside, a seemingly endless array of first-rate historical landmarks, artistic masterpieces, beautiful squares and a world-class culinary scene all combine to make Siena one of our favourite cities in Europe. Siena is Italy’s pre-eminent Gothic showcase, and the city’s majestic architecture pays eloquent testament to its noble heritage at the forefront of Italian culture. Find out why wonderful Siena needs to be on your radar for your next trip to Tuscany with our guide to what to see on a weekend in this fabulous medieval city! 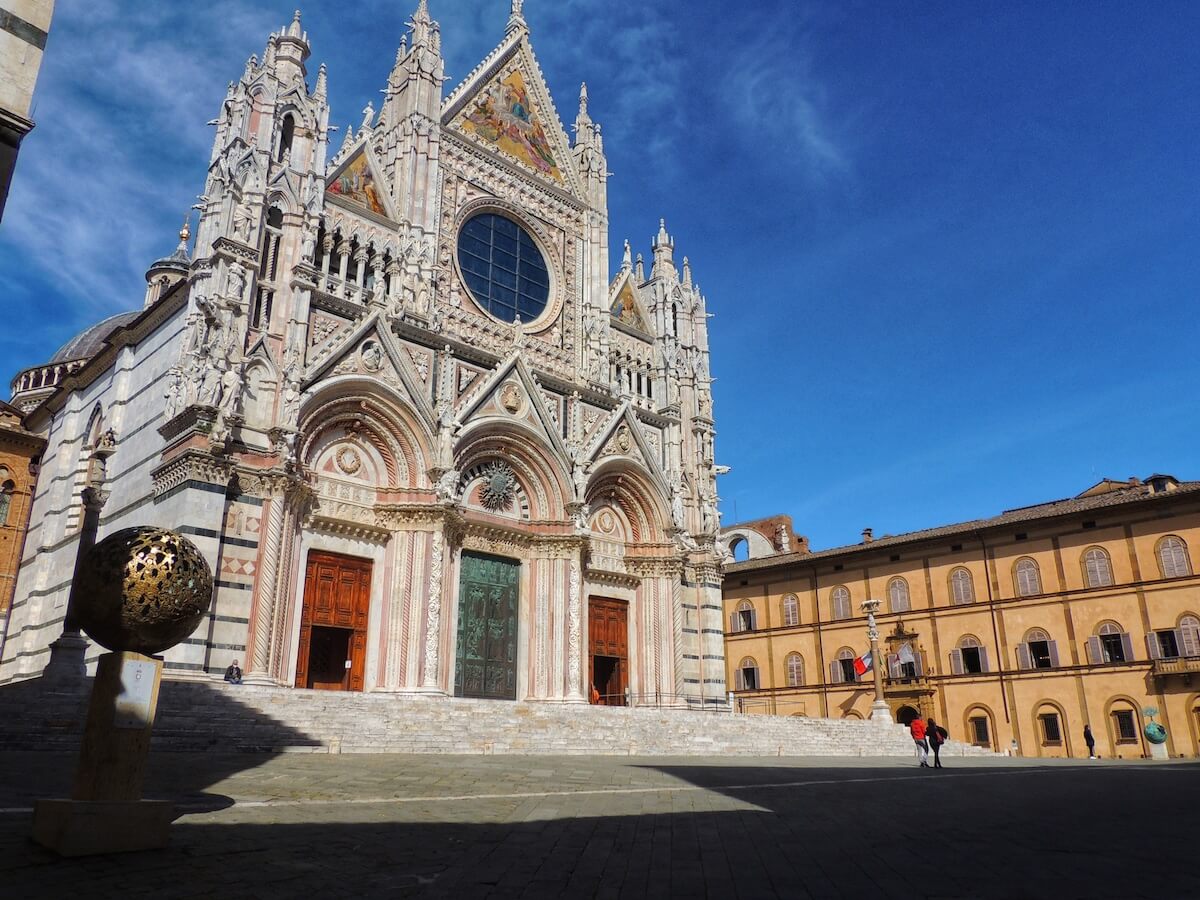 Cathedral of dreams...In Siena, the city's Duomo reigns supreme. You'll never forget the first time this extraordinary Romanesque-Gothic confection materialises from the dense web of surrounding streets: severe prophets and patriarchs loom from every possible perch on the sparkling, pinnacled facade, the work of the peerless Giovani Pisano. 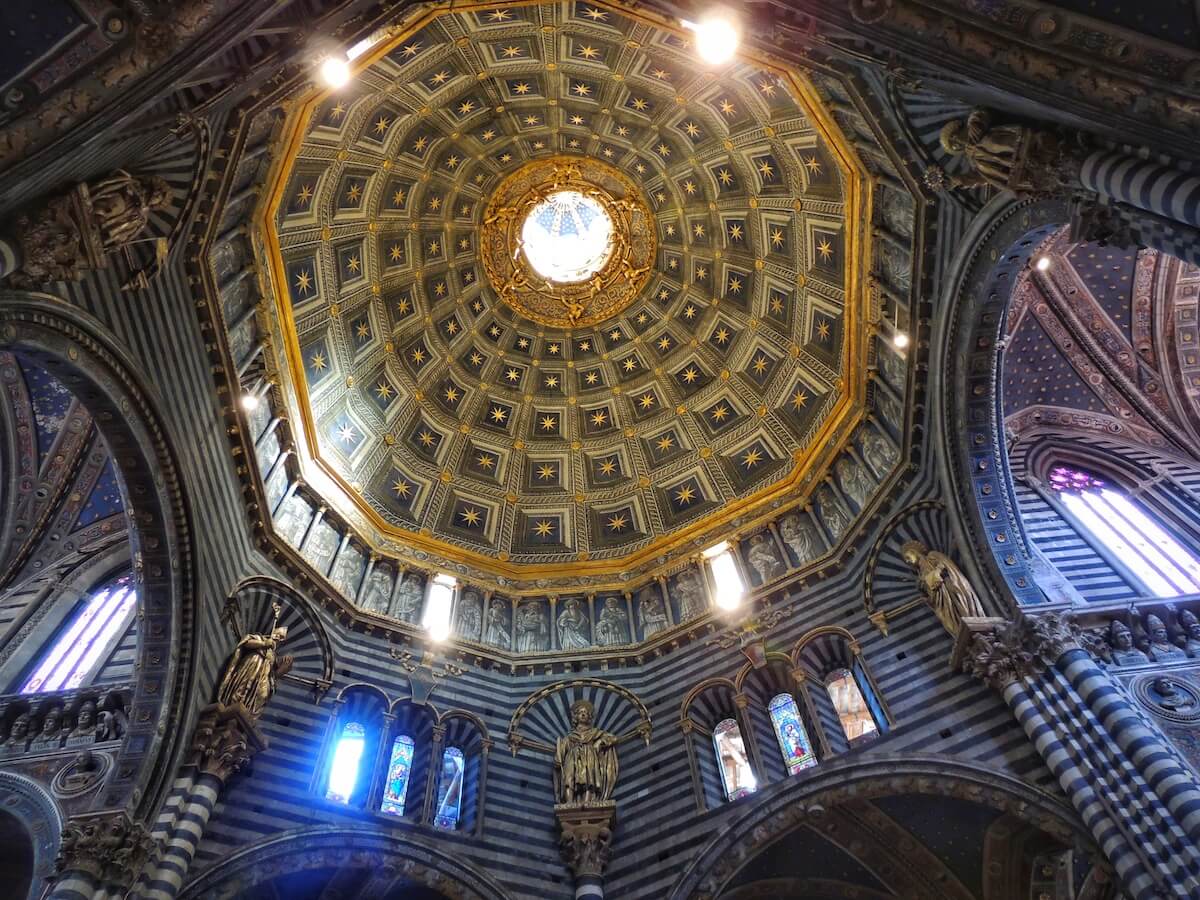 Within, a veritable treasure trove of marvels await, starting from is its incredible mosaic floor - the work of generations of artists working across the centuries to glorify the city. No less impressive is Donatello's restless John the Baptist and Nicola Pisano's fabulous carved pulpit. Duccio's massive stained glass window and Pinturicchio's frescoes meanwhile constitute two absolute highlights of the early and high Renaissance respectively. You could spend hours here and barely scratch the surface - testament to Siena's heritage as one of the world's finest centres of art. 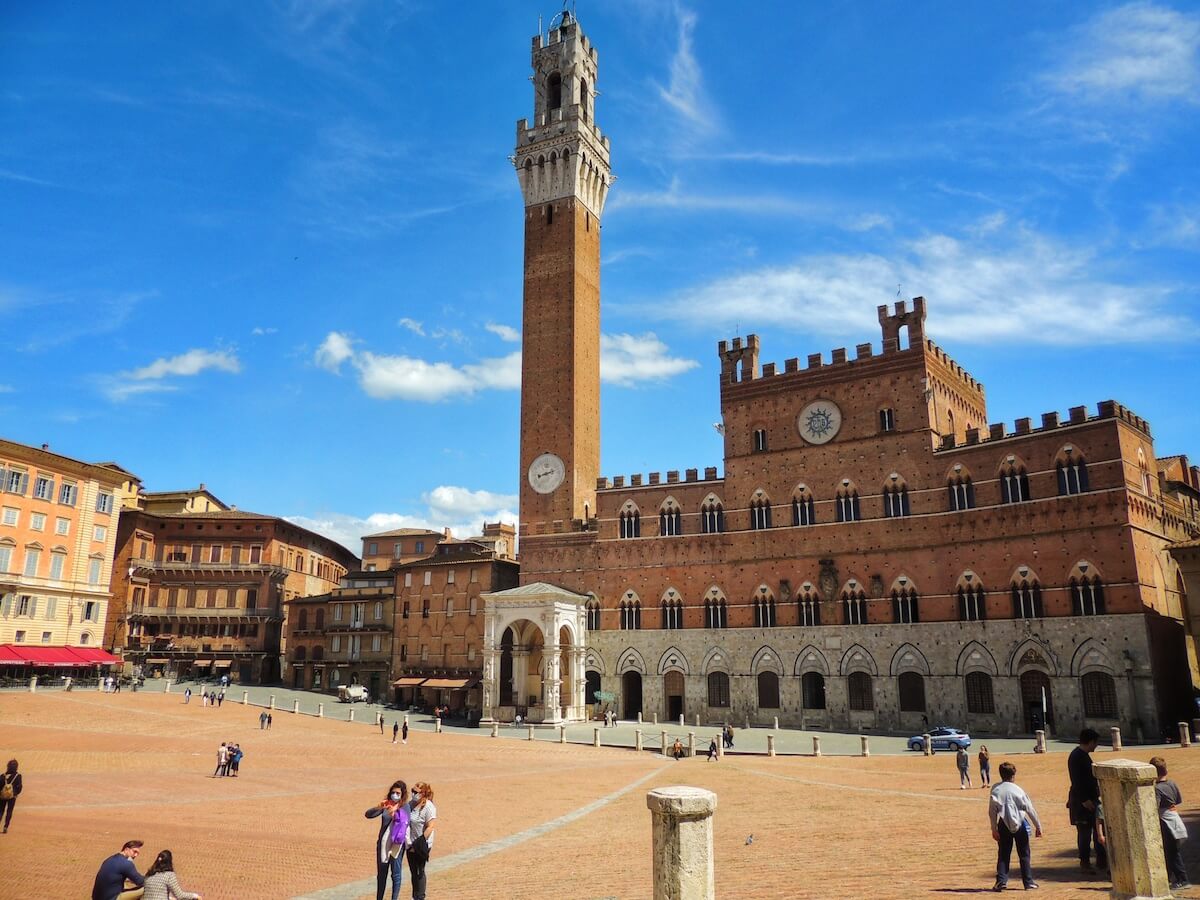 Piazza del Campo might well be Italy's most spectacular square. A magisterial example of medieval planning, the sweeping shell shaped space harks back to Siena's glittering heyday as one of Italy's most important city states. Dominating the skyline is the Torre Mangia and adjacent Palazzo Pubblico, imposing landmarks of Sienese power, whilst the enchanting Fonte Gaia provides a soothing liquid soundtrack for those lounging on the piazza’s gentle slope. 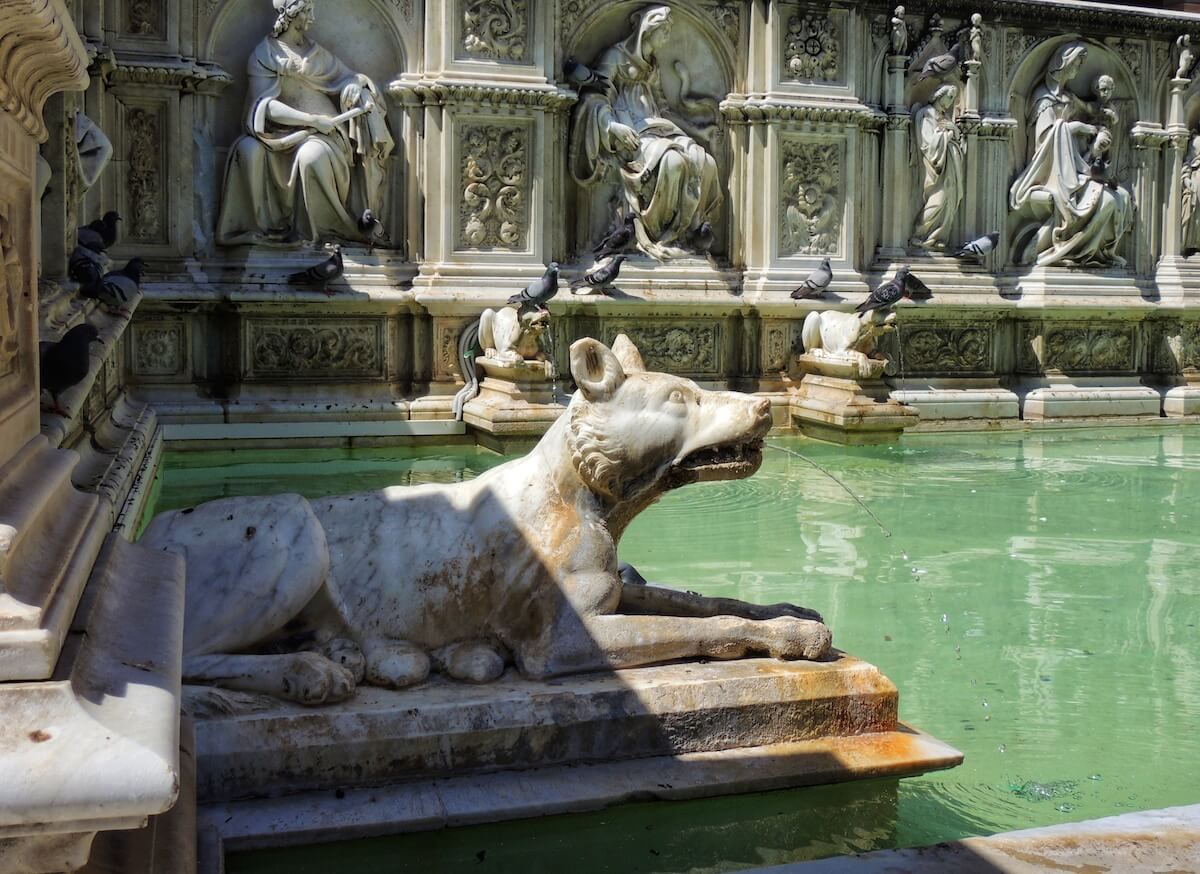 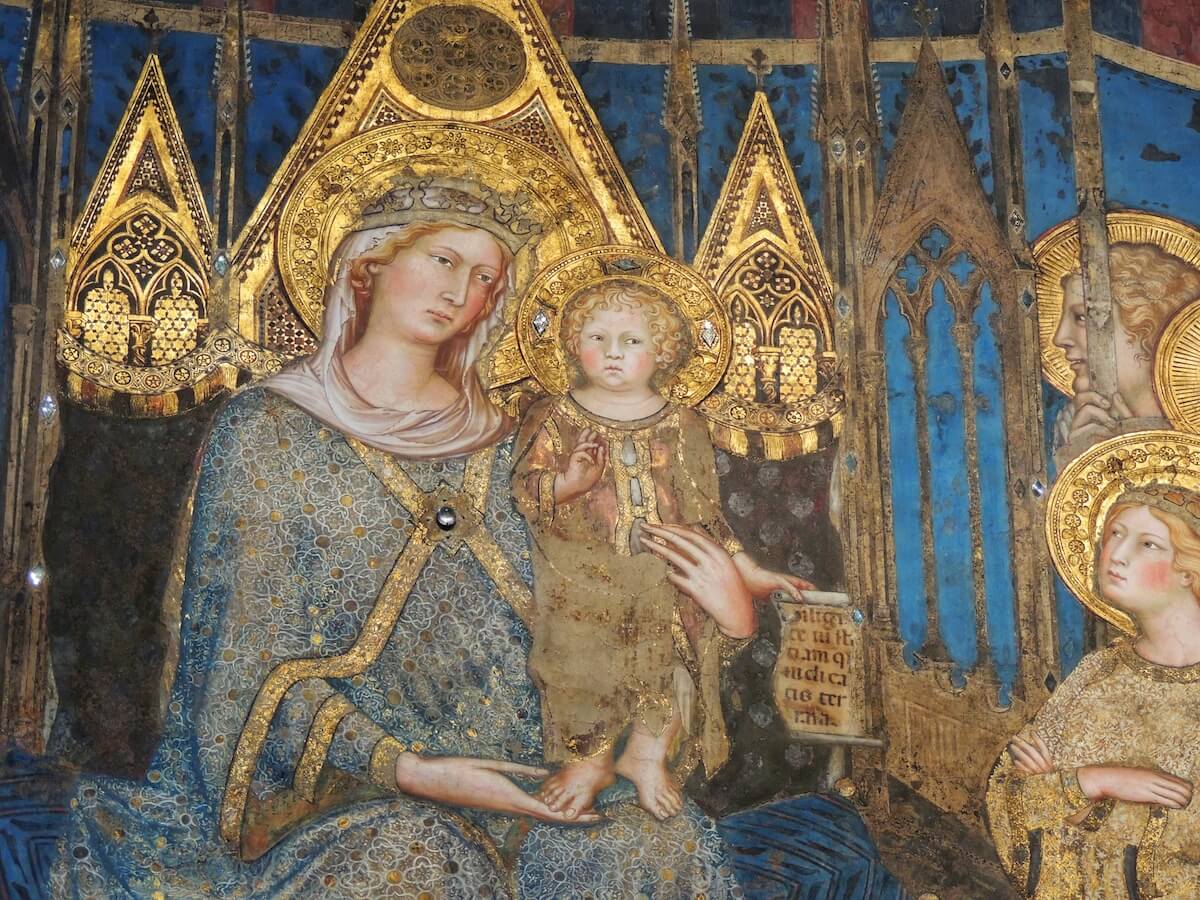 No visit to Siena is complete without a visit inside the Palazzo Pubblico, where the city's council of nine presided over 60 years of unprecedented prosperity from 1285 - a welcome break from Siena's notoriously factious political scene. In an attempt to demonstrate the pre-eminence of Sienese culture, the ruling faction commissioned some of finest artists of the late Gothic period to decorate the palace’s spectacular series of halls and chambers with paintings exalting the history of Siena and its commitment to civic-minded ideals. 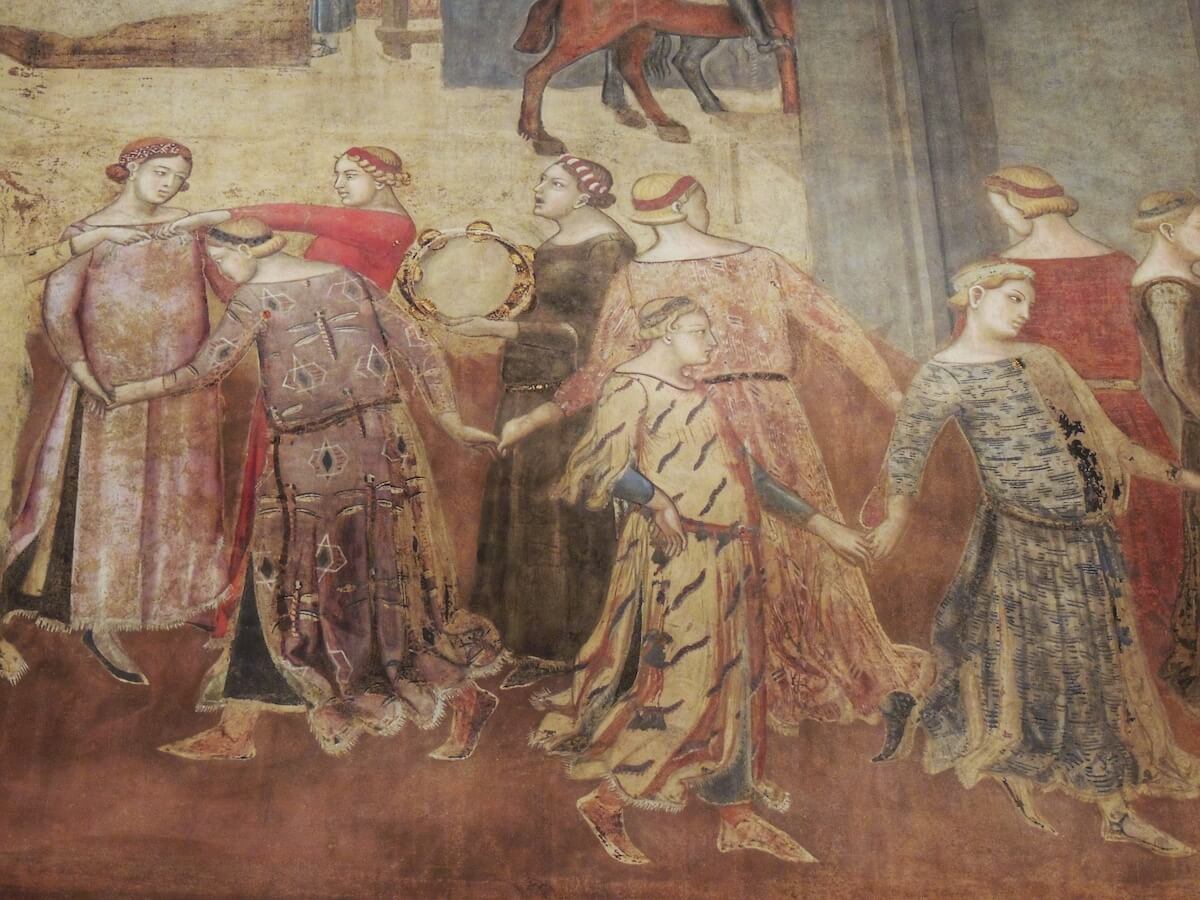 Amongst the masterpieces to look out for are Simone Martini’s magisterial Maesta in the Sala del Mappamondo, a joyous and glittering array of sacred figures surrounding the Virgin and Child enthroned beneath a billowing canopy, and the same artist’s adjacent portrait of the Sienese military commander Guidoriccio da Fogliano riding out to capture the castle of Montemassi. The real highlights, though, are the twin Allegories of Good and Bad Government that Ambrogio Lorenzetti painted in the Palazzo at the behest of the Council between 1337-9. These extraordinary frescoes depict the political ideals of Siena (associated, unsurprisingly, with Good Government) in fascinatingly detailed scenes alive with vignettes drawn from contemporary life, and offer a unique insight into the secular world of the 14th century. 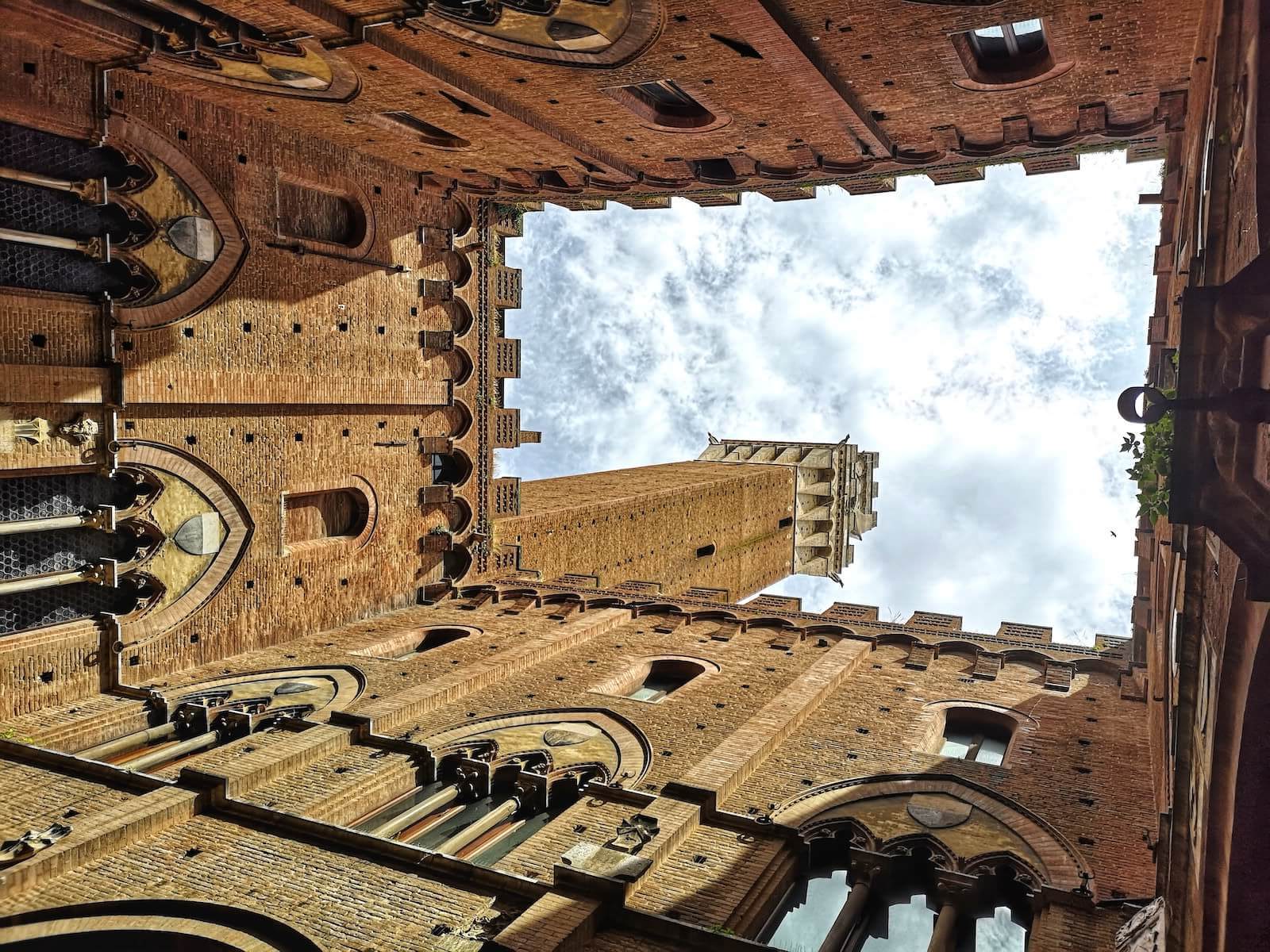 Spare a thought for the wages eater... Towering over the Palazzo Pubblico is the medieval Torre del Mangia, or Tower of the Eater. Built between 1338 and 1348, the spectacularly crenellated tower stands all of 102 metres high, and owes its curious name to the first man employed as its bellringer in the 14th century, one Giovanni di Balduccio. It seems that poor old Balduccio could never hang on to his salary for long, and his infamous profligacy soon earned him a nickname that would ensure he would go down in Sienese history: il Mangiaguadagni, or the Wages Eater. Make the climb to the top of the spectacular tower for wonderful views across the city and surrounding countryside. 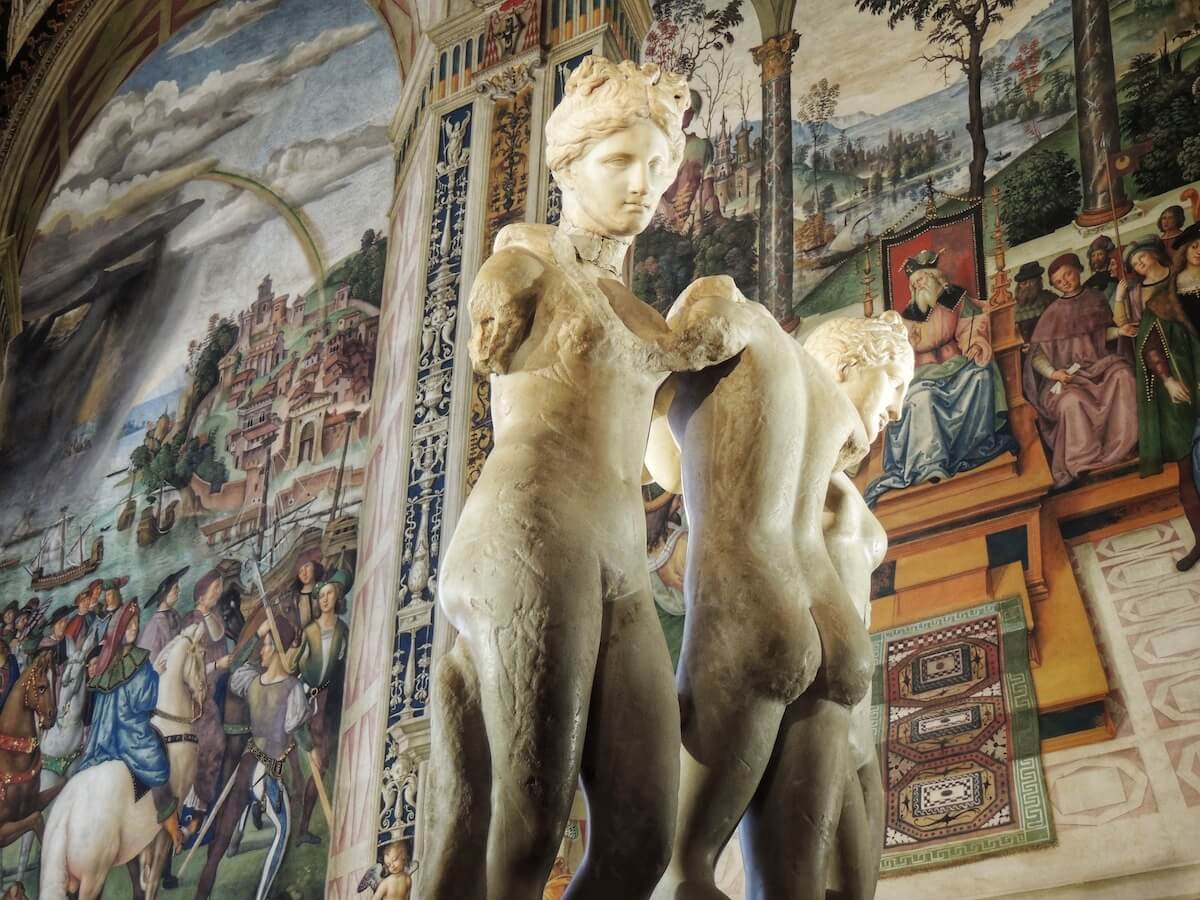 You probably know the names of many of the great families of the Renaissance - the Medici of Florence, the Farnese of Rome, the d’Este of Ferrara and the Sforza of Milan to mention only a few; but have you heard of the Piccolomini? The Piccolomini came to prominence in 13th century Siena, and their star burned brightest when the humanist and poet Aenea Piccolomini rose to the papacy in 1458, taking the name Pius II. Pius wasted little time in promoting his adoptive nephew Francesco Todeschini to the rank of Archbishop in his native Siena, who would himself be elected Pope in 1503 (the aged Todeschini would sadly last just 26 days on the throne of St. Peter).

To honour his defunct uncle, Todeschini built a magnificent library in the Duomo of Siena to house his extensive collection of books in 1492, and commissioned the artist Pinturicchio to fresco the entire room with scenes from the life of Pius II. The splendidly colourful frescoes offer a wealth of contemporary detail, and are among the finest examples of Renaissance painting in all of Italy. 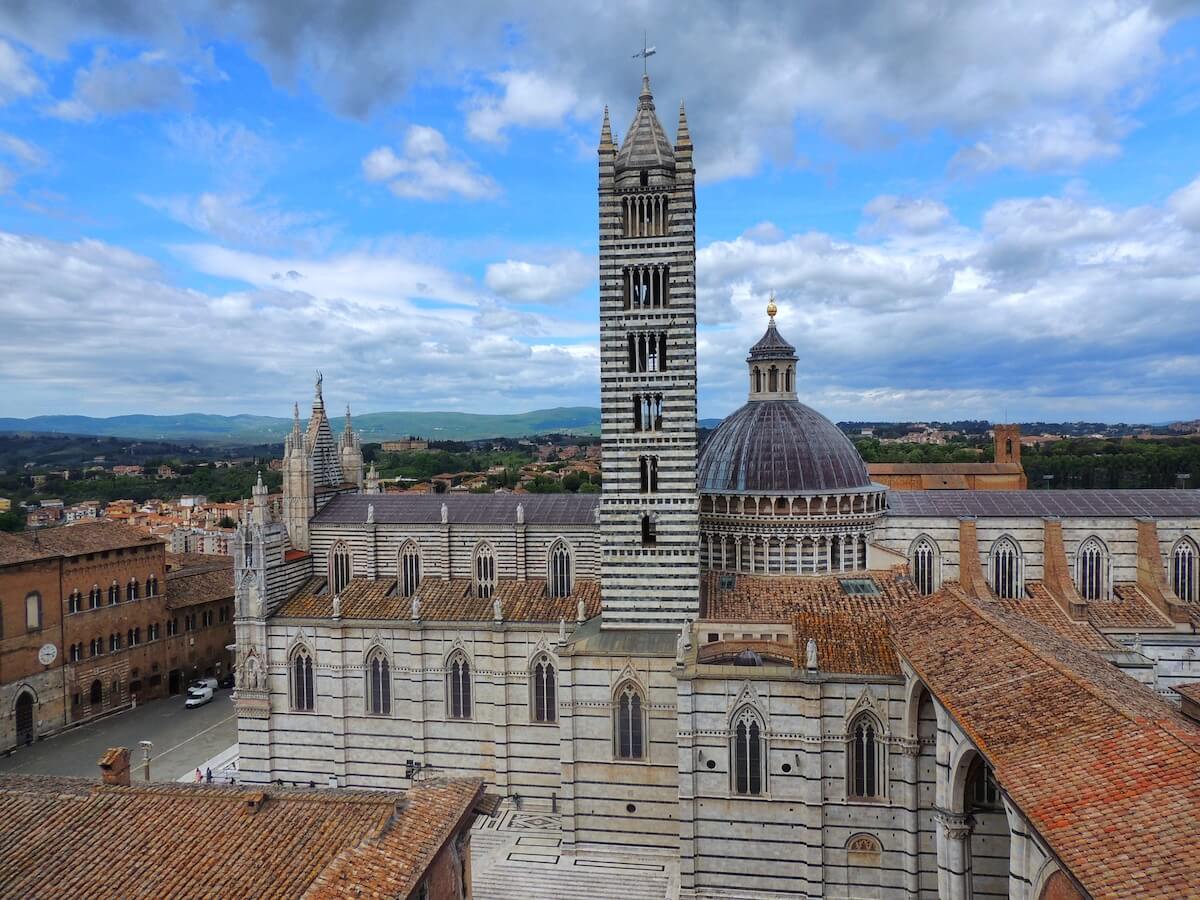 Siena’s sprawling Duomo is imposing by any measure, but did you know that if the city’s ambitious residents had had their way in the 14th century it would be more than twice as big as the structure we see today? In 1339 the city-state was at the height of its prosperity, and so a plan was hatched to massively expand the cathedral by transforming the current church into the transept of a projected ‘Duomo Nuovo’ complete with 3 new naves. The Fates soon rebelled at Sienese hubris: the Black Death arrived in the city in 1348, and the devastating plague didn’t take long to carry off the majority of the city’s inhabitants. Siena was destined to never recover from the shock, its glory days firmly at an end, and today the unfinished remains of the new cathedral provide fascinating testimony to the greatest disaster of the Middle Ages.

What remains of the ambitious plan is known as the Facciatone, or big facade: make the climb up the 131 step spiral stairwell to the top for unforgettable views of the Duomo from on high as well as panoramas across Piazza del Campo extending to the verdant Tuscan countryside in the distance. 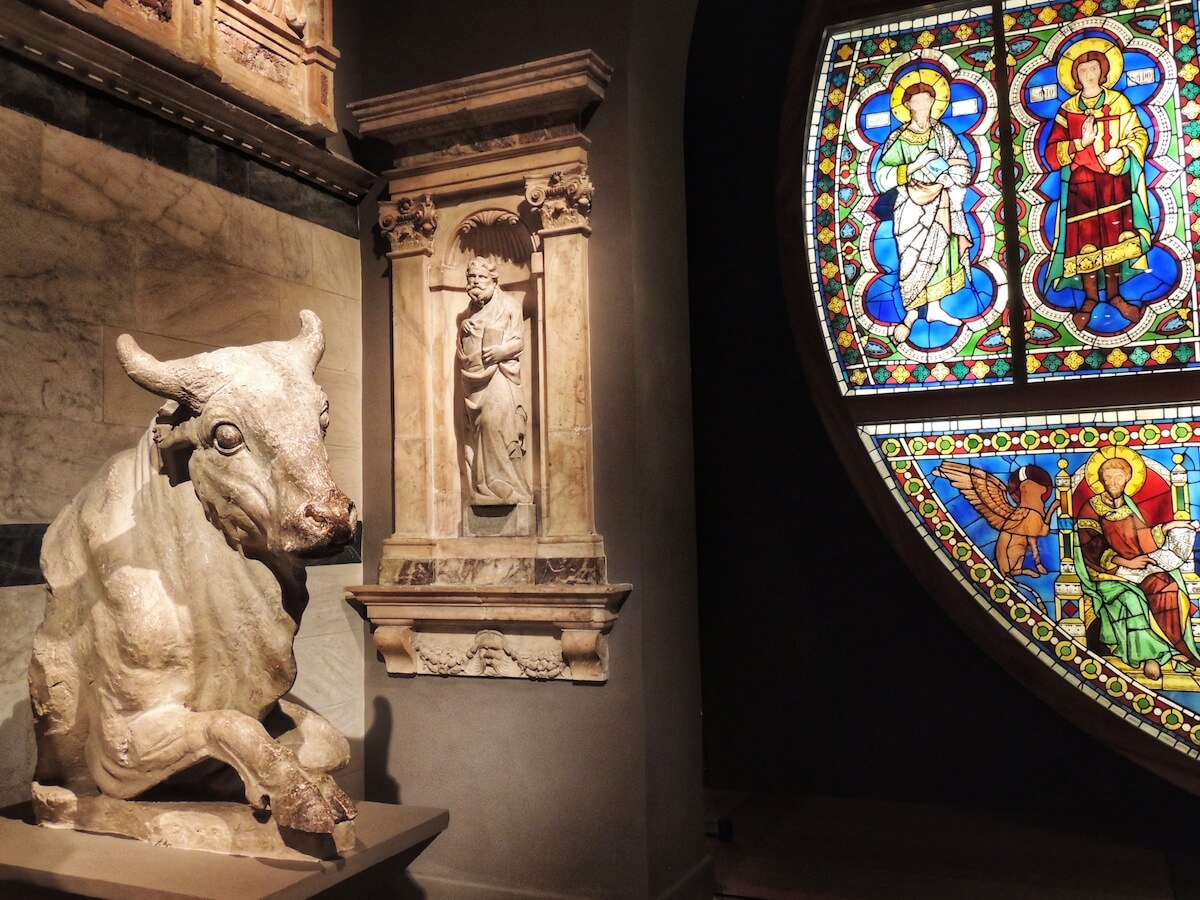 This impressive museum next door to the Duomo houses many of the precious original artworks commissioned for the cathedral. First amongst equals is Duccio di Buoninsegna’s magisterial Maestà, painted between 1308-11 as a huge screen for the church’s high altar. The artistic heritage of Siena is inextricably tied to the career of Duccio, widely considered the father of the Siena school, and the Maesta is his masterpiece. On the front of the massive dual-sided panel an enthroned Virgin and Child are surrounded by angels, whilst the back is divided into no fewer than 26 scenes depicting the Passion story of Christ, a pre-eminent example of Medieval visual storytelling. The narrative power and technical skill of Duccio’s craftsmanship in scenes such as Christ’s Entry into Jerusalem would prove enormously influential in the evolution of Renaissance art. 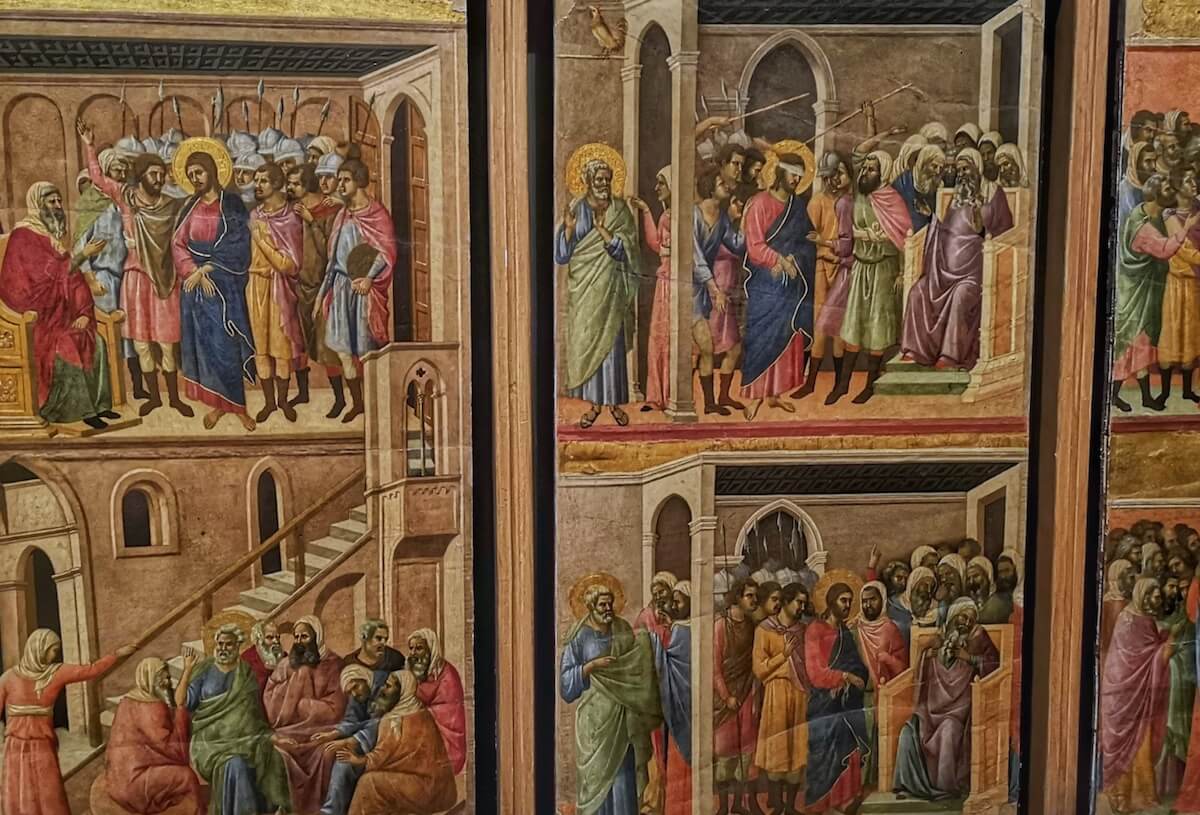 Other highlights in the museum include many of the original sculptures carved by Giovanni Pisano for the Duomo’s facade, now replaced by copies. Note the out-of-kilter proportions of the figures - the sculptor accounted for the perspectival distortions inherent to their original positions high up on the facade by exaggerating the scale of their upper bodies. 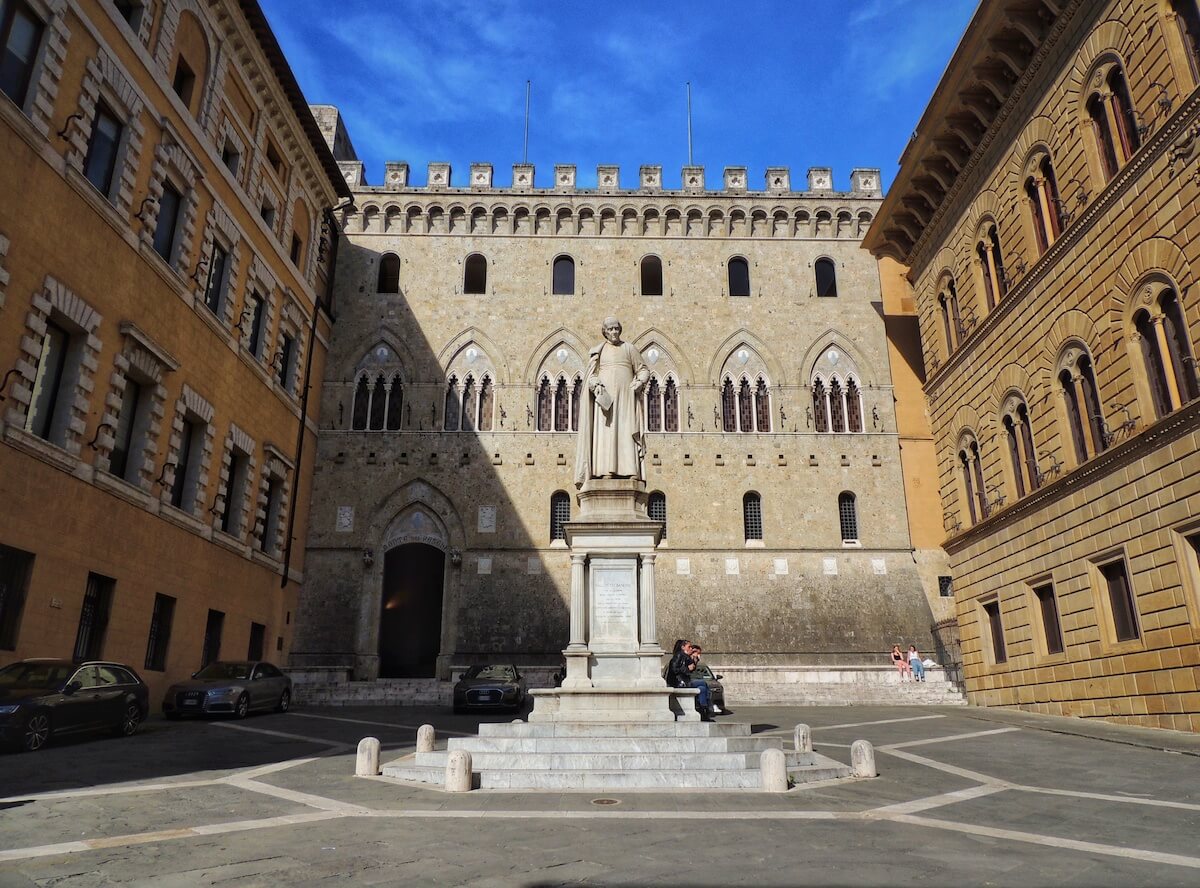 In the heart of Siena's beautiful historic centre, Piazza Salimbeni is one of the most evocative corners of the medieval city. For centuries the preserve of the powerful Salimbeni clan who resided in their fortress-like palace overlooking the square, their eventual demise in the 15th century eventually led to the property falling into the hands of the Monte dei Paschi Bank in the 1800s, who restored it in a striking neo-gothic manner. A monument to the 17th-century Sienese economist and free-market pioneer Sallustio Bandini dominates the square, keeping a watchful eye on the bankers as they come and go each day. 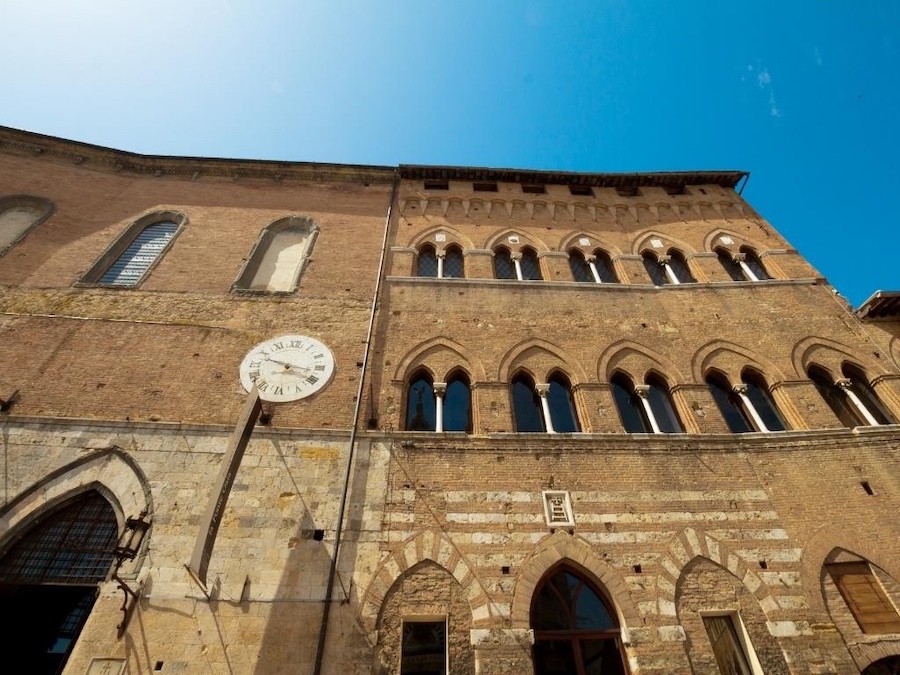 This sprawling complex began life in the 13th century as a hospice for pilgrims making their way through Siena on the Via Francigena, a medieval pilgrimage route that extended across Europe from England all the way to Rome. The institution’s remit expanded to include providing care for the city’s indigent population as well as orphans, bringing it close to the status of a hospital in the sense we understand the word today.

Beautiful 15th-century frescoes in the Pellegrinaio, or Pilgrim’s Hall, relate the history of the hospital; Domenico di Bartolo’s Il governo degli infermi (The Care for the Sick) in particular offers up a wealth of detail about the Hospital’s earl-modern operations. There’s no end to the artefacts on display in Santa Maria della Scala’s 10,000 square metre interior, and you could easily spend a day exploring it all. Look out for Jacopo della Quercia's original sculptures for the Fonte Gaia, now replaced with copies. 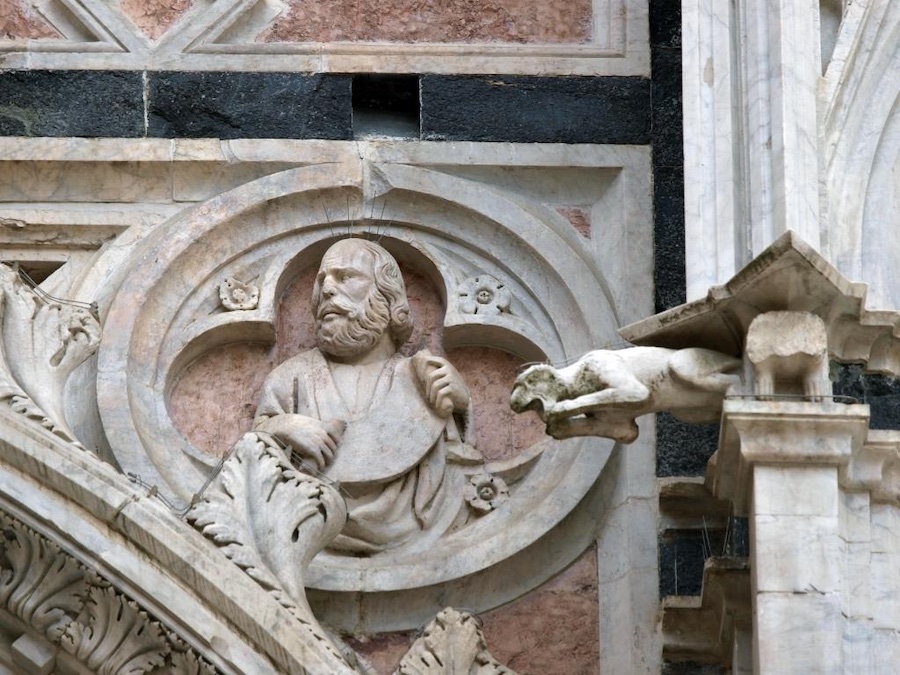 Located on a picturesque piazza, Siena’s Gothic baptistery is home to one of the most important sculptures in early-Renaissance Italy. The work of three of the finest artists of the 15th-century, the building’s elegant hexagonal baptismal font is studded with marble sculptures and bronze panels representing scenes from the Life of John the Baptist by Donatello, Ghiberti and Jacopo della Quercia.

Donatello’s Feast of Herod is a masterpiece of perspective, the dramatic moment of the Baptist’s beheading rendered in a fabulously subtle play of light and shade made possible by the artist’s masterful command of relief. Vibrant frescoes cover every inch of the wall surface, transforming the Baptistery into a masterly miniature that’s well worth visiting on a tour of Siena. 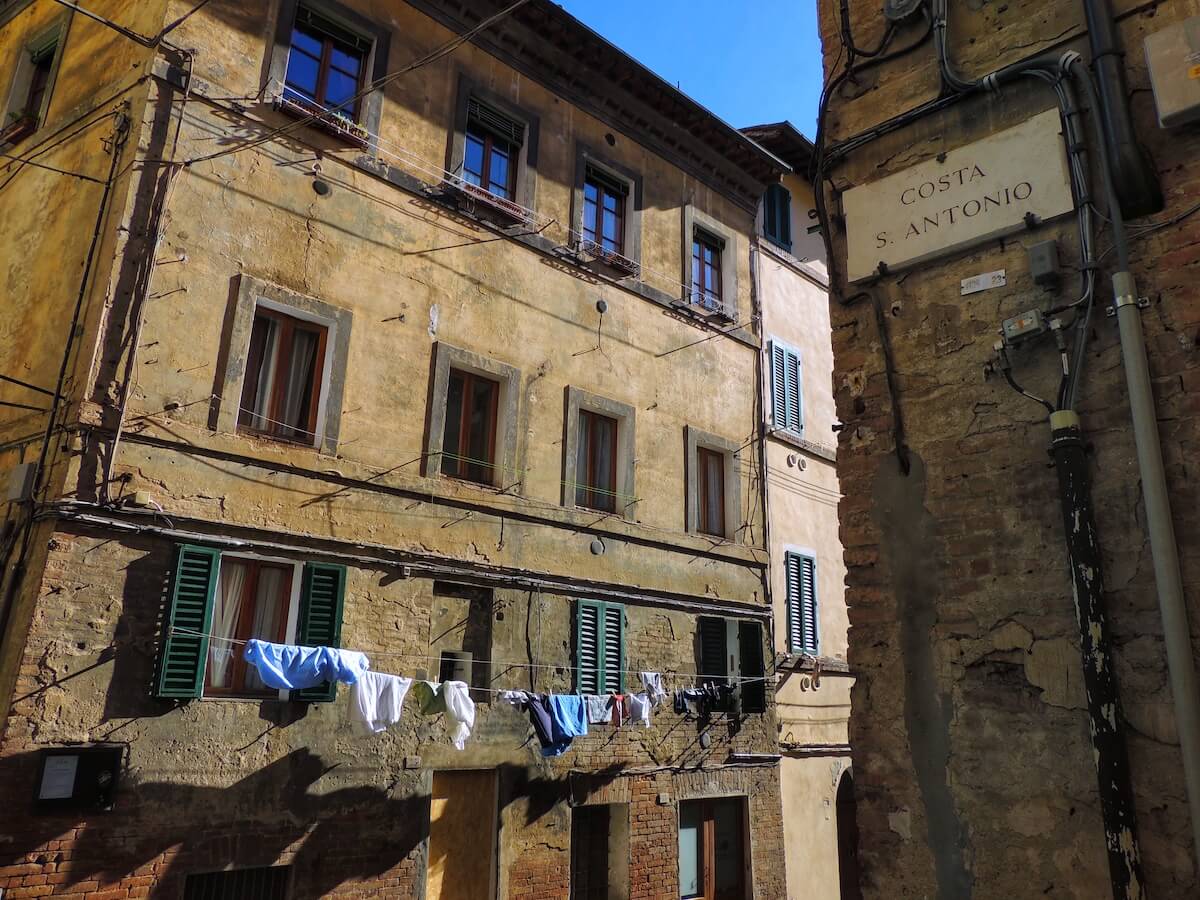 And finally, one of the great joys of visiting Siena is simply wandering aimlessly through its enchanting maze of medieval streets and squares, pristine brick palaces and red-tiled roofs everywhere you look. Pop into the basilica of San Domenico to see the head of St. Catherine of Siena, or admire a fantastic feat of medieval engineering in the Fontebranda; stroll through the city’s ancient gates, or simply grab an outdoor table at one of the city’s innumerable charming cafes and watch the world go by. There is so much to see in Siena that you’ll need more than one trip!

If you’re planning on visiting stunning Siena this year, be sure to check out Through Eternity’s tour of Siena and San Gimignano. Our carefully crafted itinerary is designed to showcase the fabulous artistic heritage of these must-visit Tuscan cities, and what better way to see them than in the company of one of our highly-qualified local guides? Check out our Siena and San Gimignano tours on our website for more information! 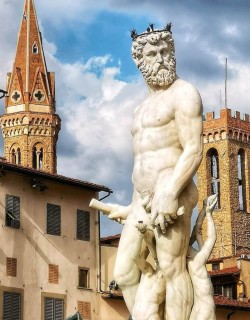 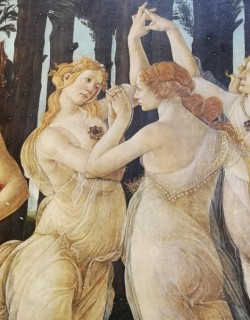 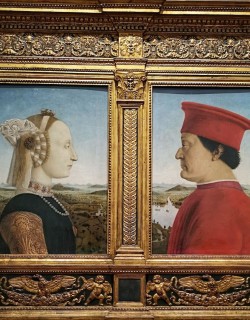 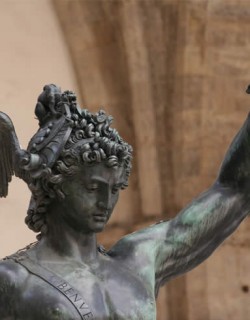