The Resurrection of Christ in Vatican Museum’s Tapestry Gallery 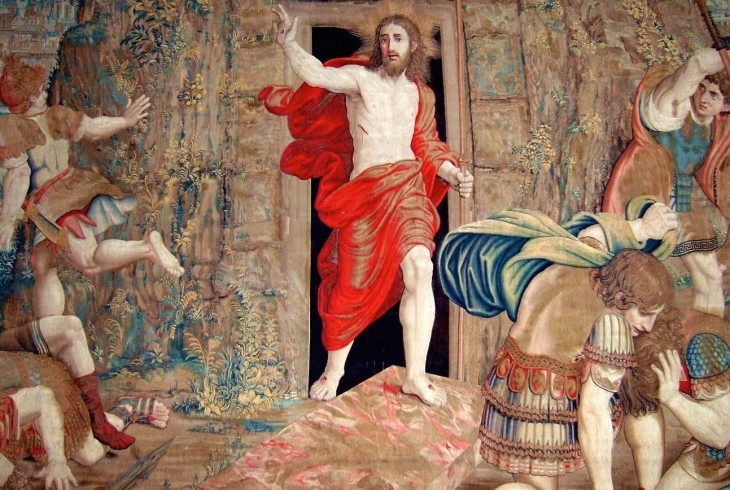 In the fifth entry in our Hidden Secrets of the Vatican Museums series, we come face-to-face with an incredible tapestry that isn’t merely content with being admired from afar. In the Resurrection of Christ in the magnificent Tapestry Gallery, Jesus seems to stare us in the eye, and follow us down the hall with his piercing gaze in a miracle of artistic illusionism.

What is it that makes a great work of art? Is it the ability to convincingly render the world around us in two-dimensions, to make paint and stone come alive? Is it about beautiful colours and virtuoso brushstrokes, dramatic gestures and human emotions? All that, sure. But perhaps most of all it’s about creating a connection between an artwork and its viewer, forging bonds of emotional attachment in ways that defy description. When you’re passing through the Tapestries Gallery at the Vatican Museums prepare yourself for a shock: because here one artwork doesn’t merely request the pleasure of your contemplation – it violently takes it from you. Gaze upon the divine face of Jesus as depicted at the moment of his Resurrection, and he gazes back.

When we think of the masterpieces of the Renaissance, our thoughts naturally turn to frescos, oil paintings and marble sculptures, all of which are fabulously represented in the Vatican museums. But it might surprise you to learn that tapestry was actually one of the most costly and prized mediums of art during this period, and some of the most revered works in the Vatican museums are wall-hangings. The eye-wateringly expensive tapestries designed by Raphael for the Sistine Chapel on the orders of Pope Leo X depicting the lives of the apostles amazed contemporaries on their unveiling in 1519, and his designs are still held to be amongst the most important works of art ever produced. Pope Clement VII decided to repeat the deal in the 1520s, by commissioning a new series of tapestries for the chapel representing the life of Christ from followers of the by-now deceased old master led by Giulio Romano, woven in Brussels by a team of expert artisans under the guidance of the Flemish master Pieter van Aelst.

The sumptuous series of 12 tapestries were first hung in pride of place in the Sistine Chapel in 1531, and all of Rome was struck by the fabulous richness of the production - all the more so given the city was still reeling from the unimaginable devastation of the Sack of Rome 4 years earlier. They were moved to their current location on the left wall of the beautiful vaulted Tapestries Gallery, almost 250 feet long and decorated with illusionistic 18th-century frescoes, in the 1830s. The first 6 tapestries portray scenes from Christ’s childhood, whilst the remaining works relate to the events after his crucifixion. Each is chock-full of fascinating details: from the indescribable desperation of mothers trying to save their children from the pitiless swords of Herod’s soldiers in the Massacre of the Innocents to the tender glance exchanged between the infant Christ and the Virgin Mary in the Adoration of the Shepherds, the entire range of human emotion is picked out in delicate threads of silk and wool, silver and gold.

But it is the massive tapestry depicting Christ’s Resurrection that is really worth a second (and third) look. In order to capture this foundational miracle of Christianity in the apparently inert threads and fibres of tapestry, the Flemish artisans conjured up an artistic miracle of their own. As his naked torso faces to his right, red drapery caught in an invisible breeze, Christ’s appears to throw a sidelong glance to his left. But as you make your way past this tapestry, any attempt to escape the son of God’s piercing gaze will be in vain – his eyes follow us down the gallery, and once your gaze locks with his there is no getting away. Even his protruding left knee and the tomb’s broken slab get in on the act, apparently shifting in perspective to match you as you move. All of a sudden we can better understand the surprise and terror of the soldiers tripping over themselves in their hurry to escape from the confines of the scene, bewildered at the miraculous sight of the supposedly dead Christ rising from his earthly tomb.

Discover these and other fascinating stories behind hundreds of artworks in the collection on our Immersive Vatican tour.

Our hidden secrets of the Vatican Museums series covers:

The Vatican Under Attack: Luther’s Graffiti and the Sack of Rome in the Raphael Rooms

Christopher Columbus Hitches a Ride in the Hall of Maps