Uncover the artistic secrets of a hidden Renaissance chapel in Rome 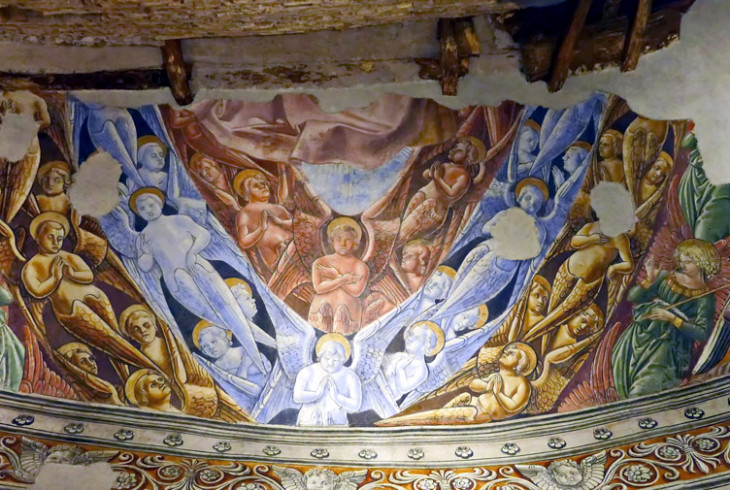 Cardinal Bessarion and the Forgotten Treasures of a Secret Chapel

The next time you find yourself at a loose end in Rome on a Friday or Saturday morning, make your way to the sweeping piazza of Santi Apostoli and pull open the creaking wooden doors of the eponymous old church. Wander down its right aisle and look for a dignified old lady sitting in wait by an open door halfway along the nave. Cough up your 4 euros (a steal!), and climb a rickety steel staircase into the narrow space of a hidden chapel beyond. When you get to the top you will find yourself on a little gantry barely wide enough for a single person to stand on, nose-to-nose with a sensationally vivid Renaissance world of spectacular portraits, charming landscapes and improbable legends.

The fantastic mid-15th-century frescoes that light up the secret walls of the Bessarion Chapel are the result of a collaboration between two of the most well-regarded painters in 16th-century Rome, whose works these days are sadly mostly only known to specialists – Antoniazzo Romano and Melozzo da Forli. They were hired by Cardinal Basilios Bessarion to decorate his funerary chapel in the church of XII Apostoli in 1464. Bessarion was a highly educated Greek orthodox monk from modern-day Turkey who later crossed the confessional divide to become a powerful Roman Catholic cardinal. From his residence attached to the side of the basilica he spent his days working towards forging a rapprochement between Western and Eastern Christianity, which had been divided into rival Latin and Greek orthodox camps ever since the great Schism of 1054.

Despite being widely praised when they were first unveiled in the 15th century, the frescoes of Bessarion’s funeral chapel are today unknown even to most native Romans, and the church is a temple to art with few worshippers. The reason for this incredible oversight? The chapel that houses the paintings was walled up in the 1700s to create a new chapel for the powerful Odescalchi family when the church received a massive Baroque makeover, and the paintings (already somewhat damaged by devastating floods and destructive earthquakes) were quickly forgotten about. Amazingly they lay undisturbed in the dark of their abandoned prison for centuries to come until their rediscovery in 1959, and only opened to the public after a long restoration in the last decade. 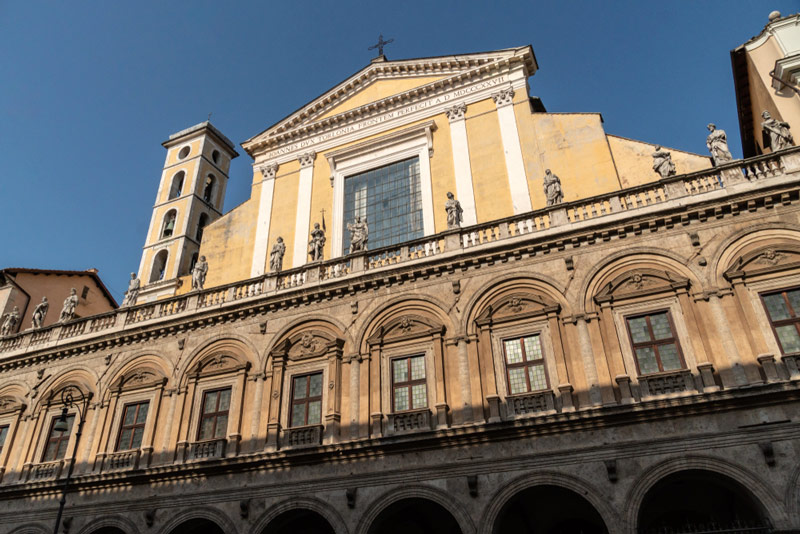 The Bullish Apparitions of Michael the Warrior Angel

The fabulous colours, beautifully lifelike portraits and dynamic poses of the protagonists are worth making a detour for in their own right, but like all Renaissance artworks these frescoes become even more interesting when you know what on earth’s going on. Each of the two main images on the upper level recounts a different miraculous apparition of the sword-wielding archangel Michael, God’s foremost warrior in the battle against Satan, in the guise of a bull. On the left Michael appears in a cave high on Puglia’s Gargano peninsula in the 5th century, just outside the city walls of Siponto (not coincidentally the town where Bessarion had the role of archbishop).

Unaware of the bull’s divine nature, a team of bowmen scramble to take down the beast. The charming figure of an archer on the far left of the image, slender and twisting in tight green leggings and jaunty red cap, fits his improbably long bow in preparation to fire off another volley of arrows. He’d better watch out though – the arrows of his colleagues have already bounced off the miraculously bullet-proof bull’s hide, and some of the repelled projectiles are rapidly making their way back towards the viewer with interest. The on-the-ball city folk soon realised their mistake and erected a sanctuary in Saint Michael’s honour on the site of the bull’s appearance, and according to legend the archangel helped the Sipontans defeat the invading pagan Neapolitans in return for their faith. The sanctuary still exists today as an important pilgrimage destination, the oldest shrine dedicated to the saint in the world.

On the right Michael-as-bull makes another appearance, once again atop a rocky crag. This time he’s made his way to a windswept island just off the coast of Normandy, where a group of fabulously painted ecclesiastics mill around on the shell-strewn beach of Mont Tombe, soon to be renamed Mont Saint Michel. The fresco refers to a dream of saint Aubert, an 8th-century French bishop of Aranches who was directed to build a sanctuary to Michael at the site where he saw the beastly apparition. In the painting Aubert is magnificently fitted out in golden robes and a bishop’s mitre at the very centre of the composition.

Discover our -> Rome Off The Beaten Path Tour: Discover its Overlooked City Center

Vivid Renaissance Portraits of Popes and Kings and a Forgotten Crusade

Amongst the brilliantly painted figures to Aubert’s left his left are two very important faces that render this fresco an invaluable art-historical document: the hawkish looking man in red cap and robes is none other than the future Pope Sixtus IV, builder of the Sistine Chapel in the 1480s; to his right, the partially destroyed figure in mauve is the future Julius II, the infamous ‘warrior pope’ who many years later would commission Michelangelo to paint his masterpiece on the Sistine ceiling. The variety of the different types of monks and priests portrayed here in harmonic procession, from Greek Basilian monks in black representing Eastern Christianity to Franciscan friars in brown robes hymning psalms, recalls the cardinal’s ambitious pet project of reconciling the Latin and Greek Orthodox churches.

It’s been suggested that bishop Aubert himself would also have been recognisable to contemporary visitors to the chapel in the 15th century – the artists have given him the features of the French king Louis XI, and this historical anachronism is the key to understanding the scene. Cardinal Bessarion himself was desperately trying to drum up support for a new crusade to retake Constantinople from its Turkish occupiers who had captured it in 1453, and needed the support of the powerful French monarchy and its massive army to do so. That Louis was the stumbling block to Bessarion’s pie-in-the-sky plans is demonstrated by the fact that the bull-saint is tethered to a tree, unable to take up his role as God’s warrior due to French lack of enthusiasm. The archangel was never to be let off his leash - the wavering French king ultimately refused to support the project, and Bessarion’s hoped for a crusade to Constantinople never came to pass. The decorations of the chapel might then represent the failure of the Cardinal’s worldly ambitions – but far more importantly for those of us less concerned with 15th-century geopolitics, they embody a triumph of early Renaissance art in Rome that miraculously survives to this day.

You can visit the Bessarion chapel in the church of Santi XII Apostoli on Piazza Santi Apostoli every Friday and Saturday between the hours of 9AM and 12PM. Tickets cost €4, €2 reductions. Before the church’s makeover, the high altar also bore works by Melozzo da Forli, a stunning array of music-making angels that you can know see in the Vatican Museum’s Pinacoteca. Be sure to look out for them when visiting the Museums! For more works by Antoniazzo, head to the churches of Santa Maria Sopra Minerva and Santa Croce in Gerusalemme.