The Prestigious Marbles of Ancient Rome 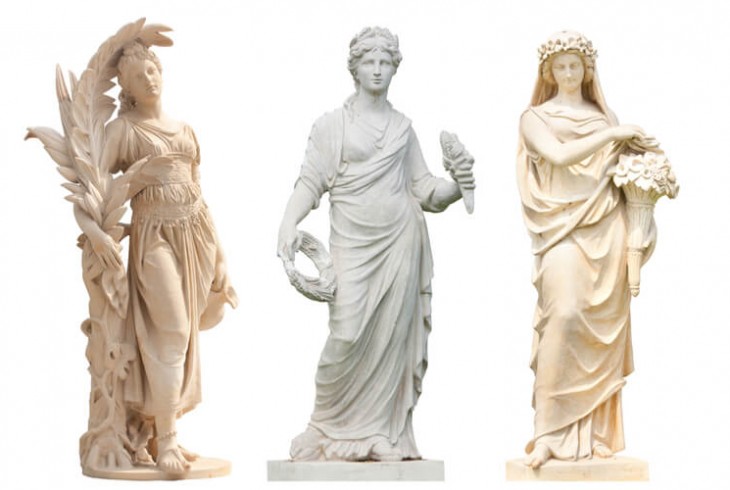 The Colour of Empire: The Many Marbles of Ancient Rome

A lot of people think of Ancient Rome as a pretty monochrome place; in the popular imagination, its temples and palaces gleam with polished white marble, while a visit to the ruins of the Roman Forum (or a viewing of Russell Crowe’s Gladiator) is tinted with beige and ochre. In reality, however, the ancient city was a riot of colour: the walls of private residences were decorated with bright wall-frescoes, public spaces were adorned with garlands and flowers, and, as recent research has shown, even the white statues were enhanced with garish paint.

No aspect of the ancient city, however, was more vivid or brilliant than its many colored marbles. These were not just different shades of white as you might expect (although there were many of these, just like a modern interior designer can choose between eggshell and ivory), but came in dozens of different varieties: yellow, black, red, as well as many blues and greens. Highly polished and often arranged in complex geometric patterns, they would have overwhelmed the senses and added to the splendor of what was then capital of the Mediterranean world.

More Colours than a Box of Crayons

Rome’s closest source of marble was modern Carrara in Tuscany, the same quarries that provided the blocks for Michelangelo’s David and Pietà and which continue to produce snow-white stone for artists and architects around the world. However, as they expanded their control across Europe, the Romans began to discover more and more exotic varieties.

Marble is formed through complex geological processes of heat and pressure which are incredibly variable and unpredictable; impurities and trace elements combine to produce different shades and qualities of stone. No two quarries are exactly the same, and local conditions across the Mediterranean created all the colours of the rainbow––and more. The Romans coveted these wondrous materials and brought them back to Italy to decorate their public buildings and private villas.

A glance at the variety of these marbles unearthed locally shows how far Rome’s power stretched: from Thebes in Egypt came the deep green “serpentine”, while the bright-red “rosso antico” was sourced from near Sparta in Greece. North Africa produced a striking “Numidian yellow” whose deep honey colour was flecked with blue veins like a stinky cheese. Other varieties came from the hills of what is now Turkey or the Greek islands, and all of these were extracted, packaged and shipped back to Rome for the delight of its citizens.

The Roman poet Statius describes attending a dinner party at the palace of the emperor Domitian on the Palatine Hill (can you visit it with our Immersive Colosseum Tour, Roman Forum and Palatine Hill) and takes special note of its many marbles:

There, the stones from the Libyan mountain gleam in competition with those from Troy,

Marbles from Syene and Chios too, and rocks to rival the color of the green-blue sea.

Stone from Luna is only brought in to support the columns, and it’s a long look up!

Your weary eyes can hardly find the roof; you’d think it was the gilded ceiling of heaven.

Clearly, the emperor and his entourage relished not only the luxury of these beautiful materials but also their striking juxtapositions in jaw-dropping combinations.

When educated Romans saw this sort of sight, however, they didn’t see only beauty, they also saw the power and might. Syene, Chios, Libya: these were all places that Rome controlled, and the many marbles that decorated the city were as much physical proof of the Empire as they were its products. To offset pink with green as Domitian did on the Palatine was only possible because of Rome’s domination of the Mediterranean, and although luxury stones became distributed across the empire nowhere were they more richly concentrated than in the metropolis itself.

Losing your marbles: What happened to Rome’s colored stone?

Visiting the Palatine Hill today, you would hardly guess at the vibrant colors described by Statius; aside from a few scraps and broken columns on site, the ancient palace of the emperors is mainly the dull-brown of brick and concrete. As with so much archaeology, our reconstructions of the past are based on the precious fragments that have survived. These include the numerous small bits of colored stone that have been discovered on site, as well as the holes in the brickwork that show where marble veneers would have covered the dull substructure.

Where did all this marble go? The answer is all around: in the palaces, monuments and above all the churches of modern Rome. The ancient Romans had exploited quarries all across the Mediterranean to decorate their capital, but after the fall of the empire, much of the city became abandoned and fell into ruin. Rome itself became one big quarry, but even better: not only did this quarry offer a huge variety of colors, these stones were already shaped into slabs or columns. When you spot green or yellow marble wall-panels, chances are they were recycled from an ancient building.

One of the most delicate and beautiful instances of this re-use can be found on the floors of many of Rome’s medieval churches. This so-called “Cosmatesque” style, is named after the family of craftsmen, the Cosmati, who developed it in the thirteenth century. They carved scraps of precious marbles into geometric shapes and arranged them into elaborately inlaid floors. This decoration is relatively common in Rome’s churches––including the Sistine Chapel – but extremely rare outside of Italy. That’s because only in Rome, thanks to its “quarries”, could artisans source all the different colors necessary to produce such floors.

Of course, just because these materials were being extracted relatively effortlessly from ancient ruins does not mean that the Cosmati or their imitators did not value them or treat them sparingly. A characteristic feature of these floors is the use of round discs of particularly rare coloured stones; looking at the whole pattern, you’ll notice that the majority of these discs made of the same marble are also of the same size. That’s because they’re made of thin sections of colored columns, turned sideways and sliced like salami––a brilliant way of rationing this precious material.

Another disc of colored marble, this one in St. Peter’s Basilica, was reused at least once; right in the middle of the central nave immediately upon entering, you’ll find a massive circle of purple stone. It was transferred here from the old church of St. Peter, where, on Christmas Day of the year 800, Charlemagne knelt upon it to be crowned Holy Roman Emperor by the Pope. The color was appropriate; this stone, called porphyry, was treasured by the rulers of ancient Rome for its imperial connotations. It could only be found at a single quarry in the remote deserts of Egypt, and the emperors maintained a monopoly on its extraction.

This makes it more than possible that Charlemagne’s coronation disc in Old St. Peter’s had already been recycled from some earlier imperial structure. The ancient emperors loved porphyry so much that they quarried it into extinction; so, from the late empire onward, the only way to get this purple stone was by reusing or recarving an old piece. This ancient mania for porphyry is only the most extreme example of the Roman lust for colored marbles, and an important reminder that we need to view the ancient world in technicolor.

Join us for a walking tour of Ancient Rome, where your guide will bring the ruins back to life in all their vivid colors. Splendid examples of Ancient Rome’s use of colored stones can be found in museums, especially at the Vatican and the Capitoline Museums. The most in-depth reconstruction of the lavishness of imperial decoration is the Immersive 3-D Experience offered as part of our Tour of Nero’s Golden House.