The House of the Vestal Virgins in the Roman Forum 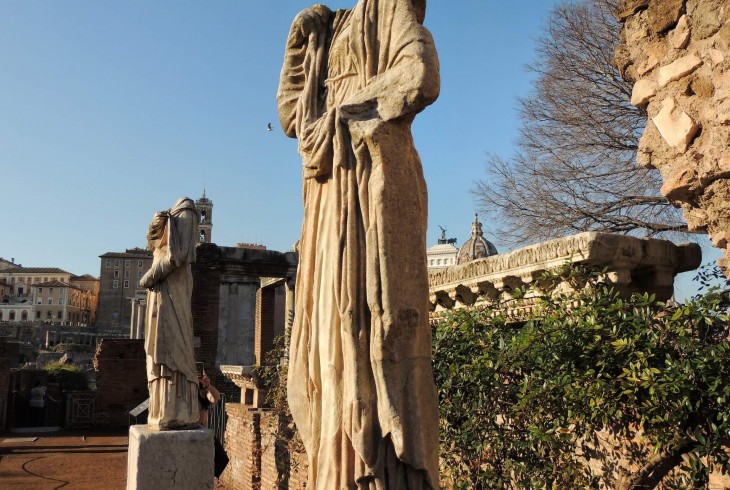 Continuing our week-long exploration of the Roman Forum (check out our ancient city Travel Destination video for more), today on our blog we’re taking a closer look at some of the most fascinating figures in the social fabric of ancient Rome: the Vestal Virgins. Revered keepers of the city’s sacred flame, Vestals were chosen by the Pontifex Maximus to serve a 30 year term piously performing the classical empire’s most sacred rites at the Temple of Vesta. The 6 incumbents lived in the magnificent house of the Vestal Virgins in the heart of the Roman forum, where their statues still look down over the atrium of their long abandoned abode.

Demands of propriety and chastity on the vestals were onerous, and a single slip-up could mean a horrible death by being buried alive. But in return, the Vestals were amongst ancient Rome’s most powerful women - they could own property, were transported around the city in covered carriages and even enjoyed primo seats at the Colosseum during the games. Read on to discover everything you need to know about these extraordinary ancient women.

What was the role of the Vestal Virgins in ancient Rome?

The Vestal virgins were priestesses selected to tend to the temple of Vesta in the Roman Forum. The temple of Vesta was one of ancient Rome’s most important buildings: dedicated to the powerful Roman goddess of the hearth, the temple conserved the city’s sacred flame, symbolic life-force of the entire Roman state. In the cultural imaginary of the antique empire this flame had enormous significance, and the fate of Rome was unavoidably tied to the fire being kept alight.

Each year, the eternal flame was renewed on the March Kalends - if the fire was extinguished for any reason at any other time, it was a harbinger of trouble for the city. Understandably, then, the role of the priestesses whose job it was to tend the flame was of vital importance.

Any failure in this duty was regarded as a serious infraction, and seems to have been an exceptionally rare occurrence. One recorded instance occurred in 206 BC, when a novice priestess allowed the flame to be extinguished. According to the ancient historian Livy, ‘the extinction of the fire in the temple of Vesta struck terror upon the minds of men,’ and the offending Vestal was whipped for her negligence.

Apart from ensuring the flame was perpetually lit, the priestesses of the temple of Vesta performed a myriad of religious tasks and rites, taking part in at least nine separate public ceremonies throughout the year, including throwing straw figures into the Tiber during the strange procession of the Argei as well as various purifying rituals.

The Vestals also performed other important tasks within the space of the Temple itself. One of the most mysterious of these was their custodianship of the storeroom known as the penus vestae, a sacred symbolic space whose secret contents, relating to Rome’s distant mythological origins, were unknown even to most Romans.

The Vestals were also tasked with the production of a ritual substance known as the mola salsa, used in various purification ceremonies, as well as safeguarding the wills of important Romans, including those of Julius Caesar, Mark Anthony and the Emperor Augustus.

Who were the Vestal Virgins? 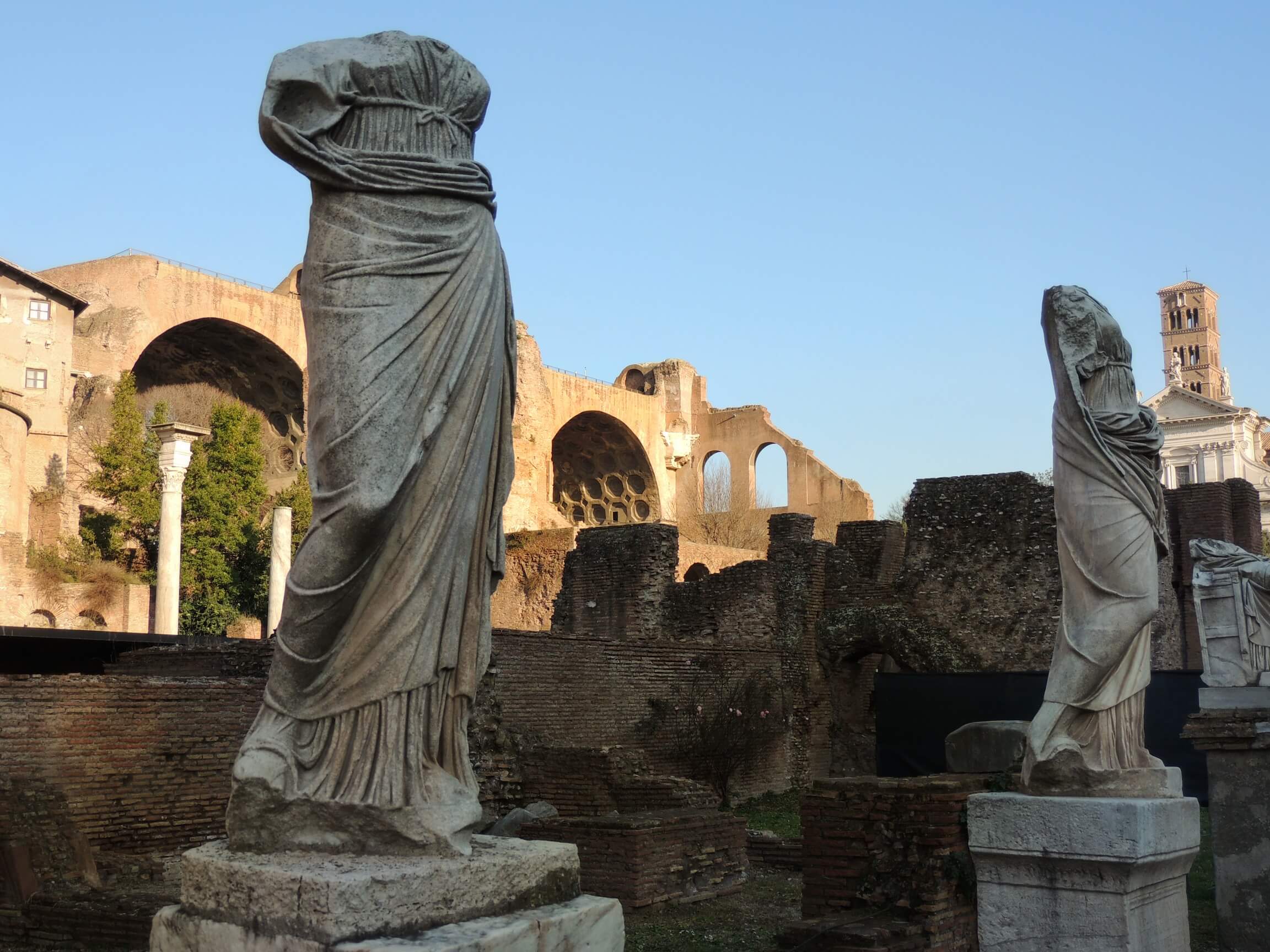 The tradition of the Vestal Virgins extended back at least as far as the 7th century BC to the reign of the second king of Rome, Numa Pompilius. Numa appointed 2 priestesses to tend to the cult of Vesta, which expanded over time to 4 and eventually 6. The Pontifex Maximus, or High Priest, was taked with supervising the Vestals, a role he continued to occupy for the duration of Roman history - in the Imperial period the role of Pontifex Maximus was occupied by the emperor himself, bringing the Vestals into direct contact with the most powerful man in the Empire.

The women chosen for the great privilege and responsibility of tending the Temple of Vesta  were selected from the daughters of Rome’s most noble families (although later in the empire, eligibility was expanded to non patrician families). There were 6 Vestals at any one time, and the group of girls eligible for the role was chosen by the Pontifex Maximus when they were between 6 and 10 years old. Successful candidates were drawn by lot from the Pontifex’s shortlist. 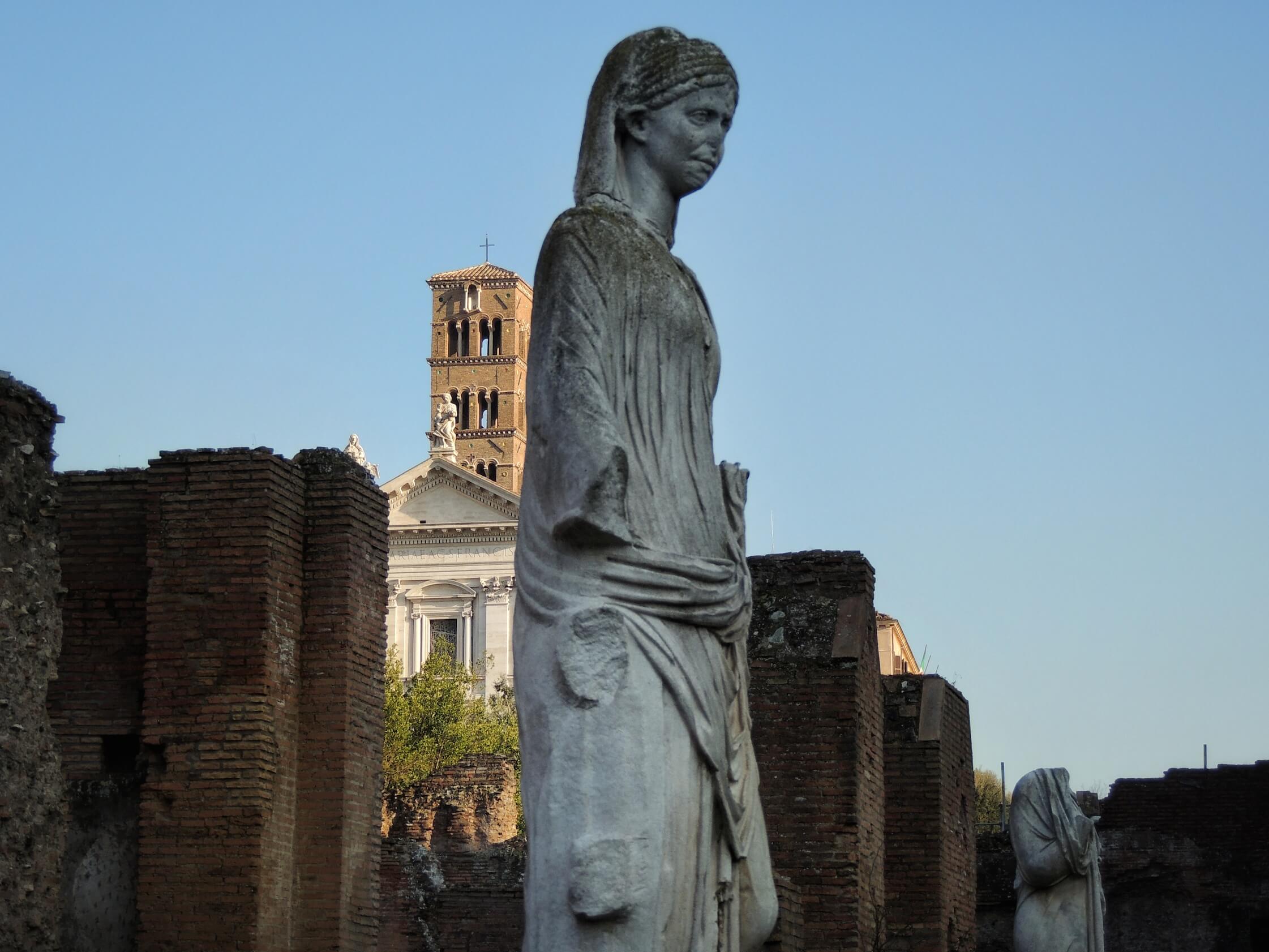 House of the Vestals, with the Basilica of Maxentius in the background

Their obligations as Vestal Virgins lasted for 30 years, divided according to Dionysius of Halicarnassus into into 3 periods of 10 years each: the first 10 formed an apprenticeship in which the Vestals learned the rites they were to perform; the second 10 saw them performing the rites, and in the third 10 the by now senior Vestals would teach the rites to newer Virgins.

After their 30 years of service had expired, the Vestals retired from their role and were given a pension. She was then permitted to marry, with the Pontifex Maximus taking on the responsibility for finding a suitably noble husband. Despite their comparatively advanced years, thanks to their power and the reverence in which they were held the Vestals were hot property in the marriage market, although it was comparatively rare for them to choose to marry after the conclusion of their offices.

What privileges did the Vestal Virgins enjoy? 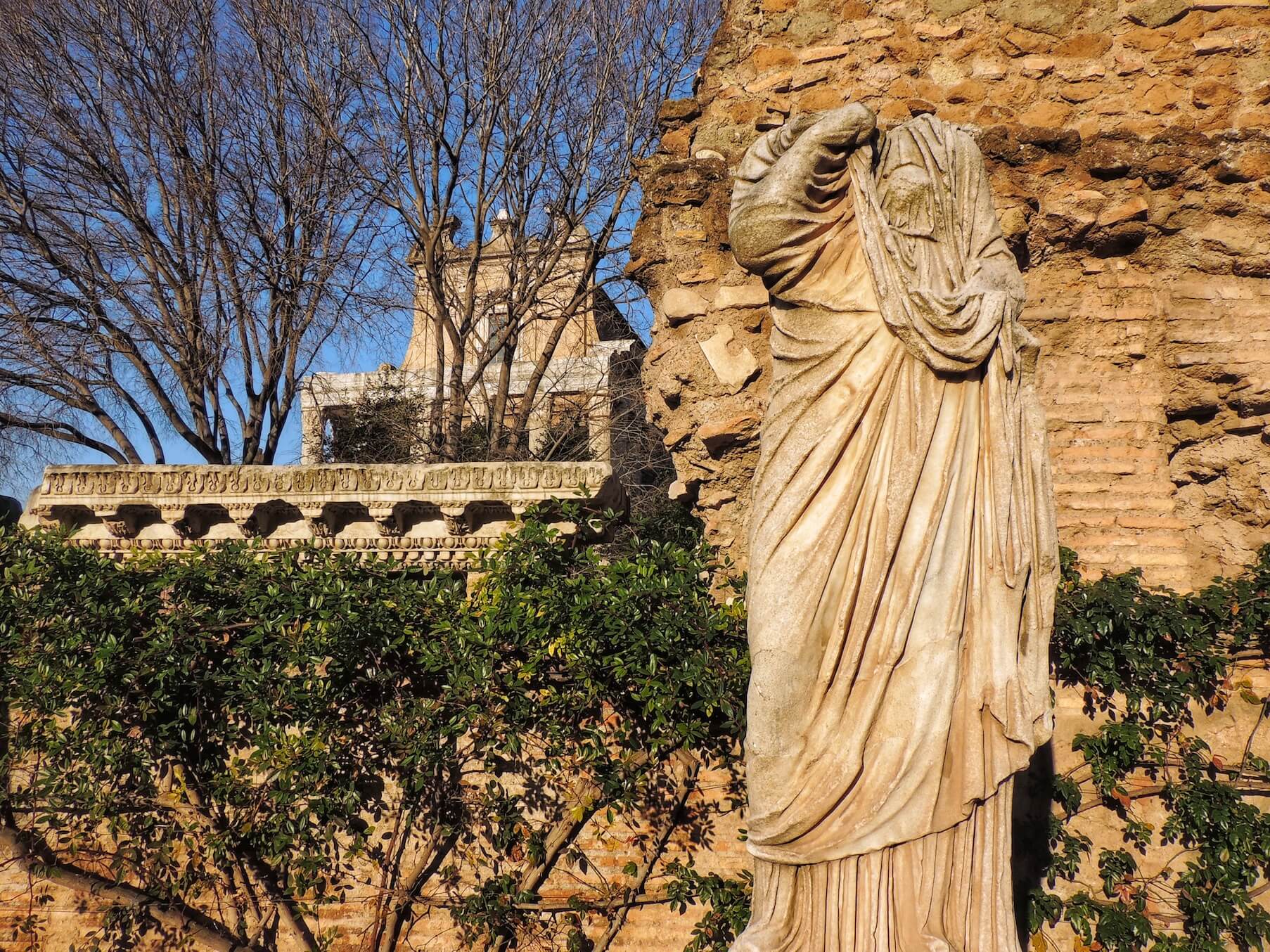 As a result of the high responsibilities attendant on their office, the Vestal Virgins were amongst the ancient city’s most high-powered women. The Vestals were revered  and even feared by the general populace; their personages were inviolable and sacrosanct, meaning anyone injuring the Vestals was sentenced to death. They also had the right to pardon condemned prisoners merely by touching them on their way to execution.

Such was the respect for the Vestals that they were the only women in ancient Rome allowed to give legal testimony, and their word has held in such high esteem that they were permitted to give evidence in courts of law without even formally taking an oath. 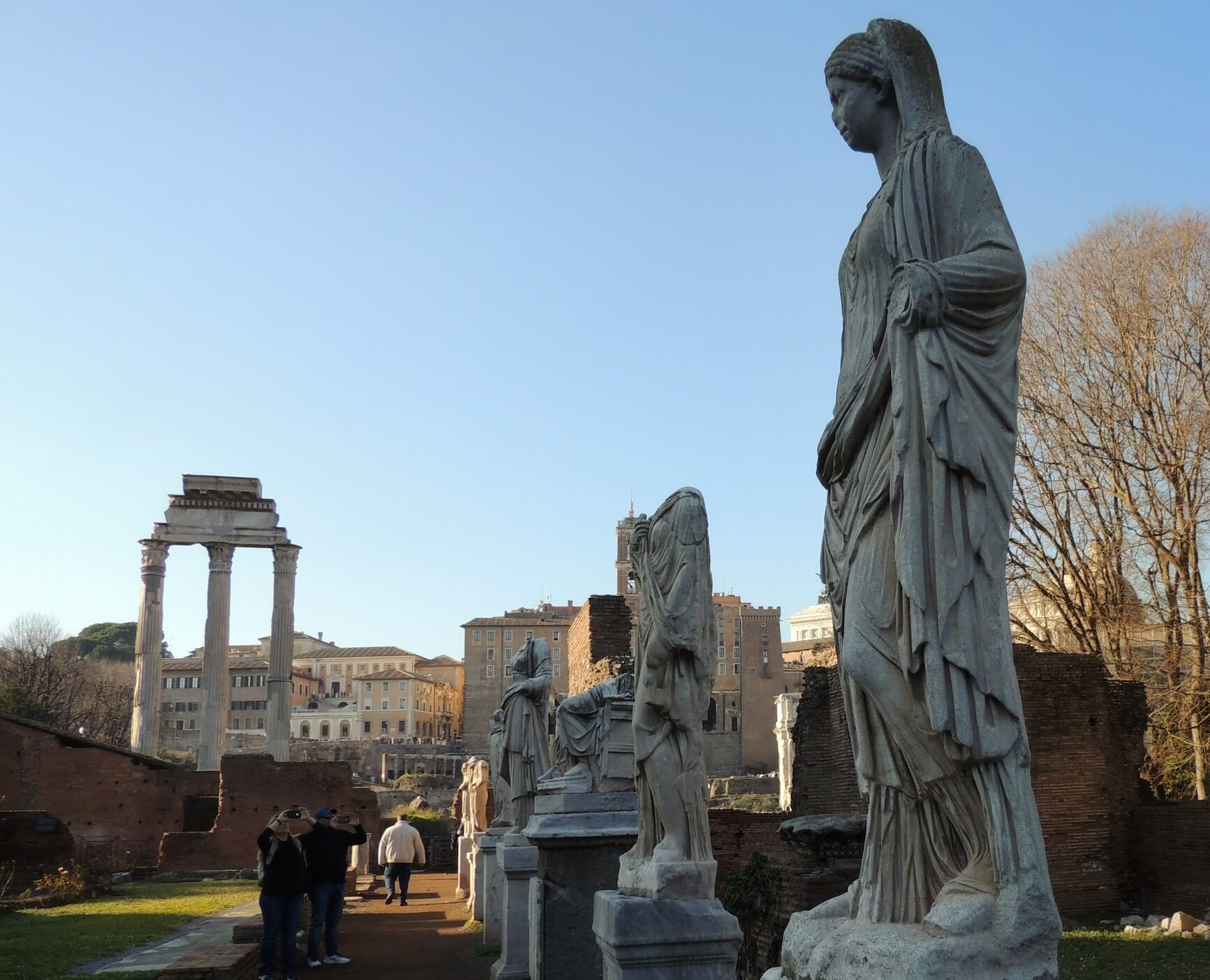 A real perk of the job was that the Vestals enjoyed positions of honour at public events and games - including at the Colosseum, where they occupied ringside seats not far from the emperor’s box. What’s more, they were permitted to travel about the city in a covered carriage known as a carpentum, and enjoyed right-of-way.

Perhaps most importantly, however, the Vestals were not under the supervision of their fathers like other Roman women, and had the right to own property as well as disbursing their estates as they saw fit in their wills. Their privileged access to the city’s most powerful figures also meant that the Vestals could build up vast fortunes and spheres of influence, ensuring a powerful role in Roman society when their term in the temple came to an end.

But the role of the Vestal Virgin came with limitations as well as privileges. As the name implies, the priestesses were bound to a non-negotiable vow of chastity for the duration of their 30 year term, and the penalties for breaking the contract was terrible in its severity.

What happened to Vestal Virgins who broke their vows? 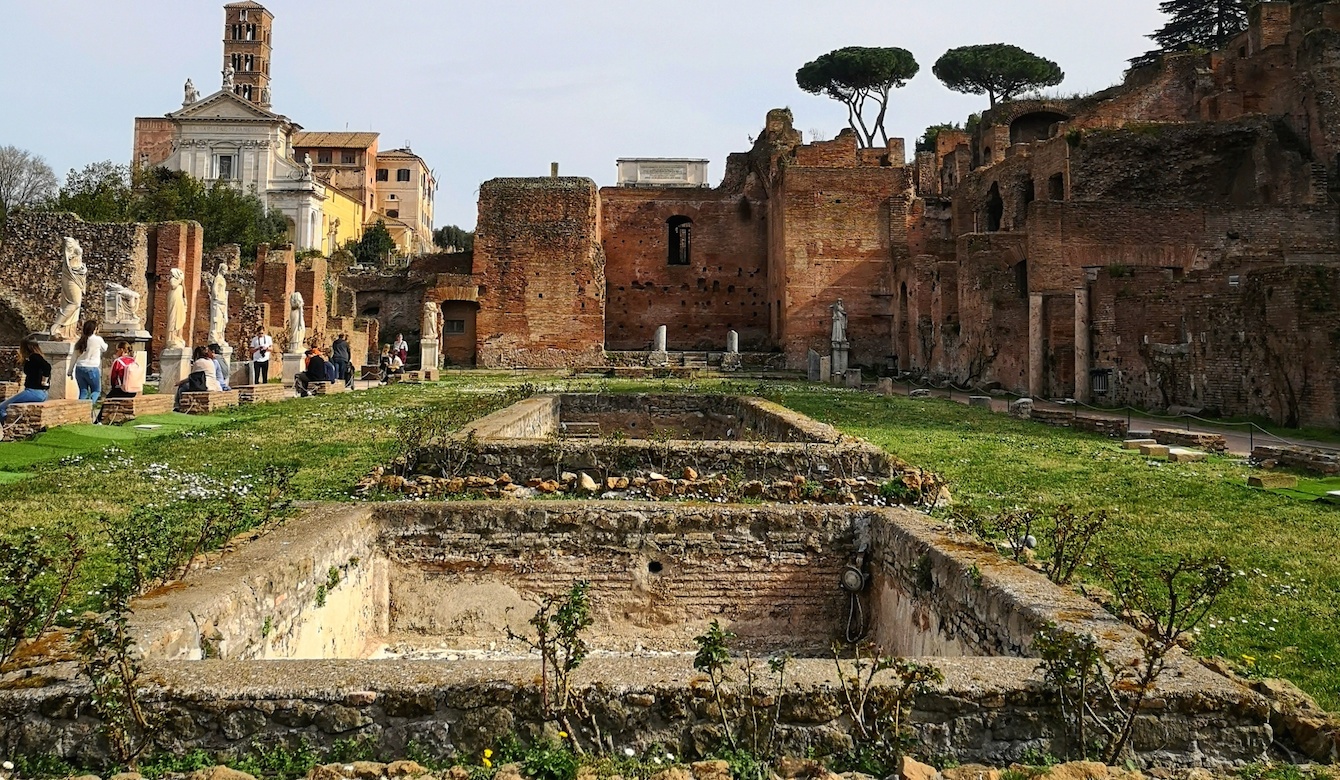 As guardians of Rome’s well-being, the purity of the Vestal priestesses was considered to be of vital importance. In the symbolic economy of ancient religion, a Vestal who broke her vow of chastity was considered to have endangered the fortunes of Rome, and the punishment was sadistic in the extreme: burial alive. As the bodies of the Vestals were inviolable, this awful punishment was a way getting around the proscription of offering  physical violence to the priestesses.

In his account of the Chief Vestal Cornelia being subjected to this punishment under the emperor Domitian, Pliny the Younger describes how the condemned Vestal was led into an underground chamber, given a small amount of bread and water, and then sealed up forever, condemned to a horrible death by suffocation or dehydration in the pitch dark.

The difficulty of determining whether a Vestal had in fact violated the strict moral code to which she was subjected was frequently not especially relevant to ancient Rome’s judicial processes. Unsurprisingly considering the highly symbolic nature of the relationship between Rome’s wellbeing and the chastity of the Vestals, infractions were revealed by the gods through omens and natural prodigies, as well as the well-being of the state itself. If Rome was in trouble, the prospect of a Vestal having committed an infraction was all the more likely. 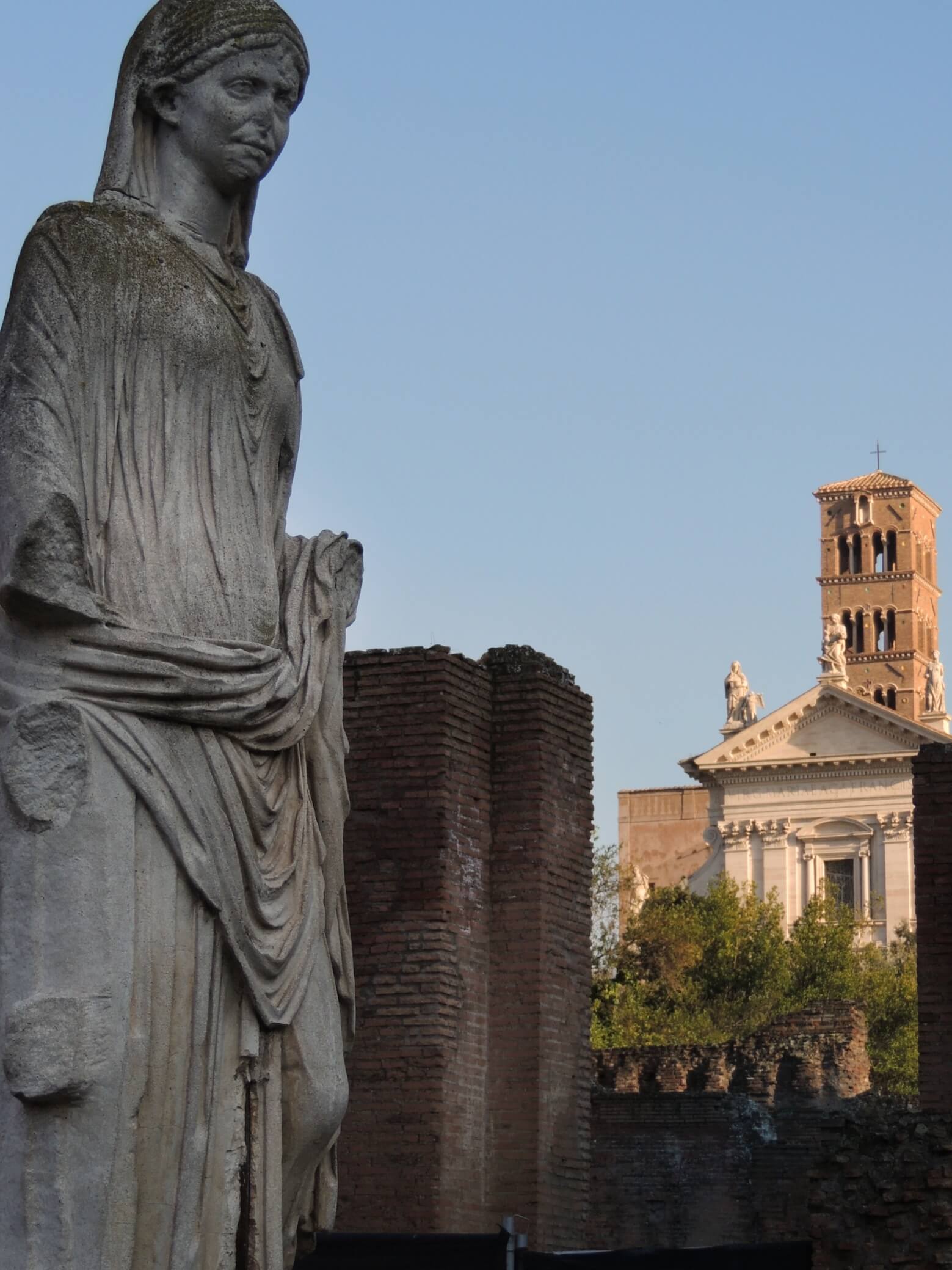 Thankfully the sentence does not seem to have been carried out very often, and generally only in times of political instability - two Vestals were condemned in 216 BC for example, after Hannibal’s near destruction of the Roman legions in Cannae. The rarity of the horrible event must have made it an even more powerful and horrifying spectacle, and it seems likely that the trials were a fait accompli, the Vestals’ fate determined by the precarious health of the body politic rather than their own sexual fidelity.

But in addition to cases of Vestals condemned to an awful death as propitiatory scapegoats for a troubled empire, the ancient chroniclers also recount a number of miraculous escapes.  In 230 BC the priestess Tuccia proved her innocence and continuing chastity by carrying water from the Tiber to the Roman Forum in a sieve, while Claudia Quinta successfully dragged a barge up the river using only her girdle.

What did the Temple of Vesta and House of the Vestal Virgins look like? 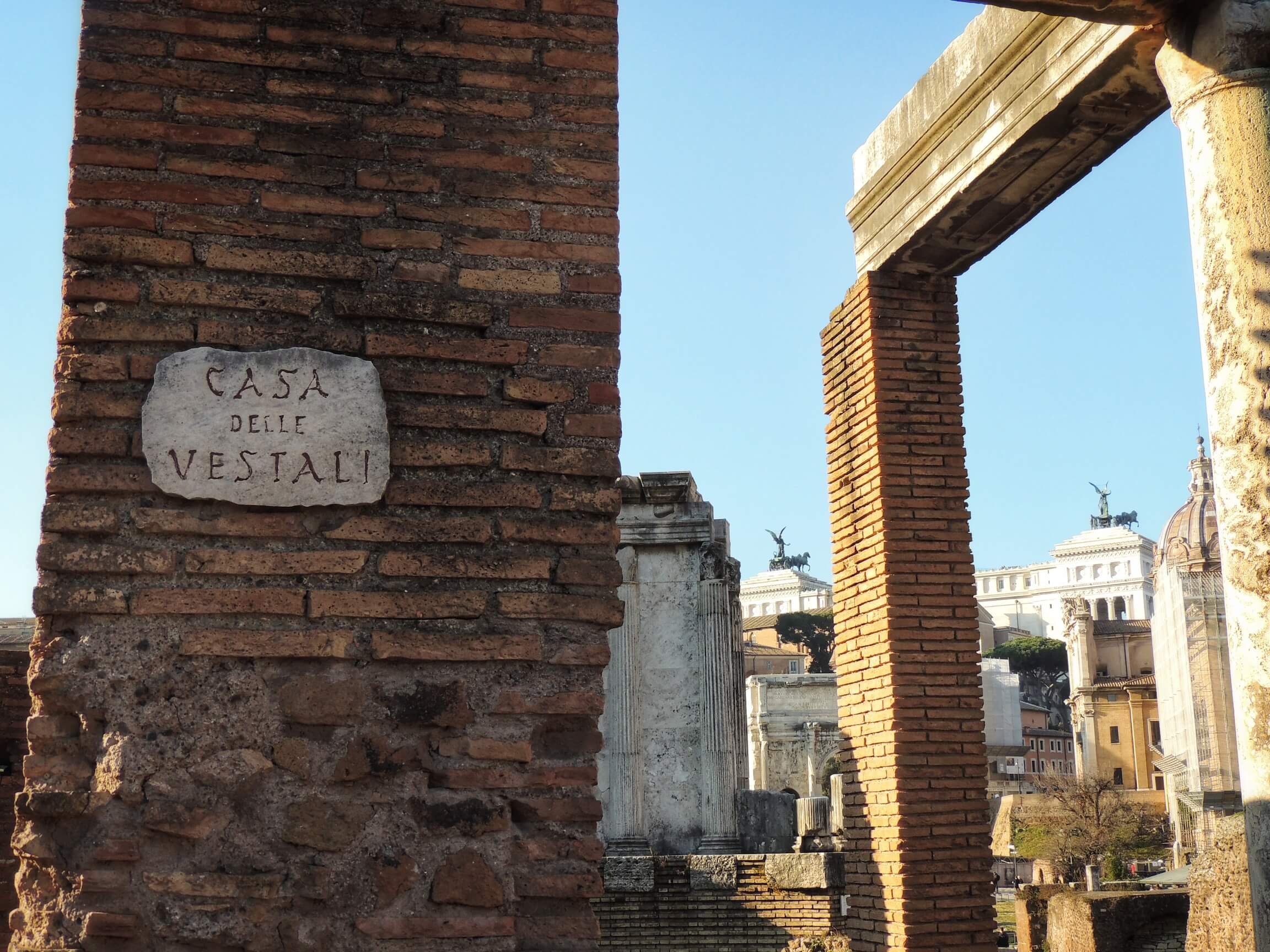 For the duration of their 30 years in the service of the Temple of Vesta, the Virgins lived separated from the ordinary Roman population in their own opulent house in the heart of the Forum, next door to the temple of which they were custodians.

The temple itself, known as the Aedes Vestae, had been rebuilt a number of times over the centuries. By the third century AD a round stone temple had been dedicated to Vesta, and the remains of the current building date from the second century AD, when the temple was restored after a fire thanks to the patronage of Julia Domna, wife of the emperor Septimius Severus. The circular temple was ringed by marble columns with Corinthian capitals, concealing the cella - the sacred interior where the eternal fire burned and smoke issued out through a hole in the roof. 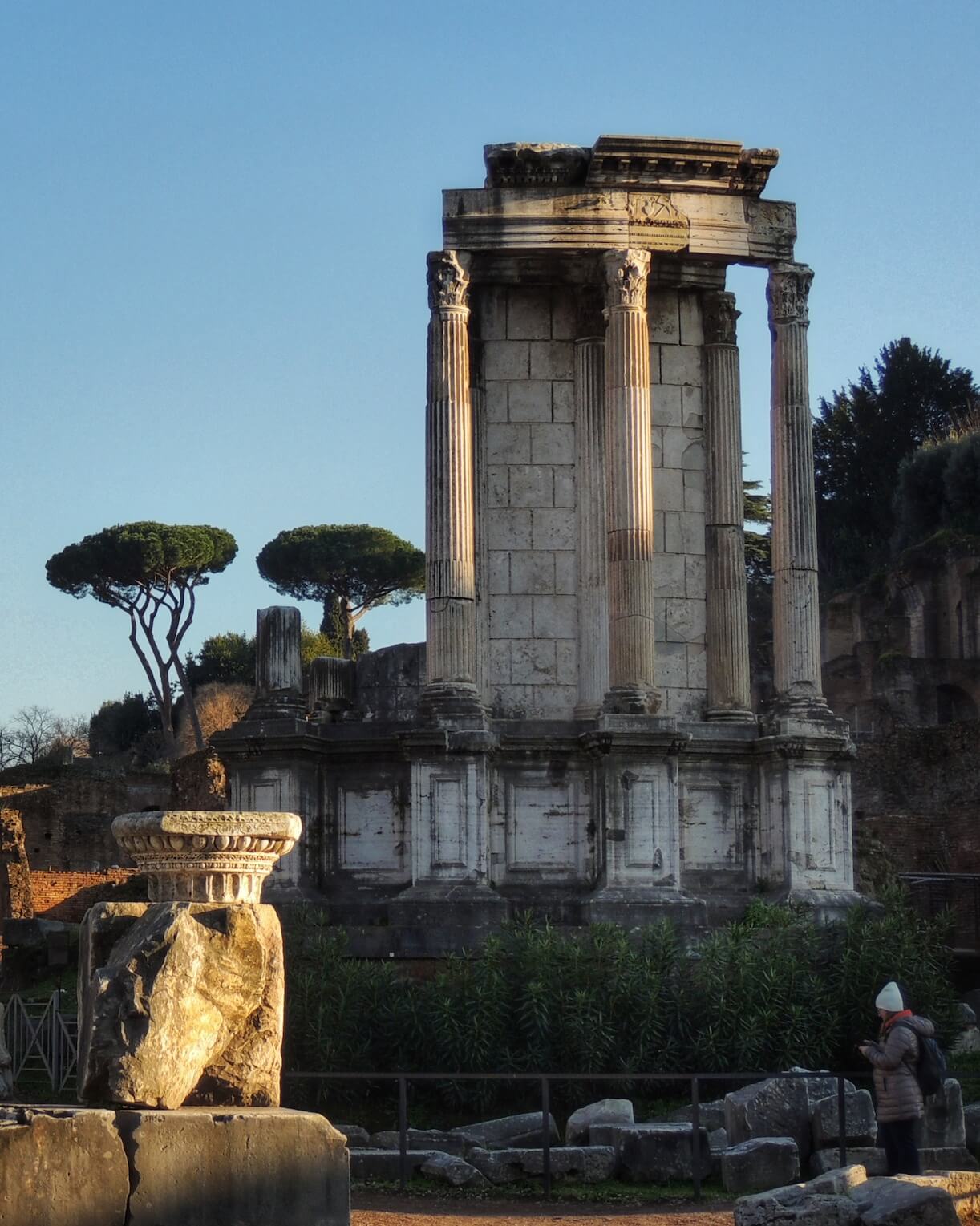 The Temple of Vesta in the Roman Forum

The adjacent House of the Vestals was one of the most lavish in all of Rome, and unfolded around a beautiful central courtyard that we can still see today flanked by a two-storey portico studded with statues depicting the most prominent chief Vestals in Roman history. State of the art heating and plumbing systems ensured that they lived more than comfortable lives, whilst access to high quality healthcare meant that the Vestals tended to enjoy life expectancies far in excess of their average female contemporaries.

Although the Vestals had no husbands or children, they were not cloistered away like nuns - a steady stream of relatives, clients and supplicants looking for favours from these powerful women would have frequented the House of the Vestals, who, despite their role as guardians of ancient and arcane rites, were both powerful and worldly figures in the ancient city. 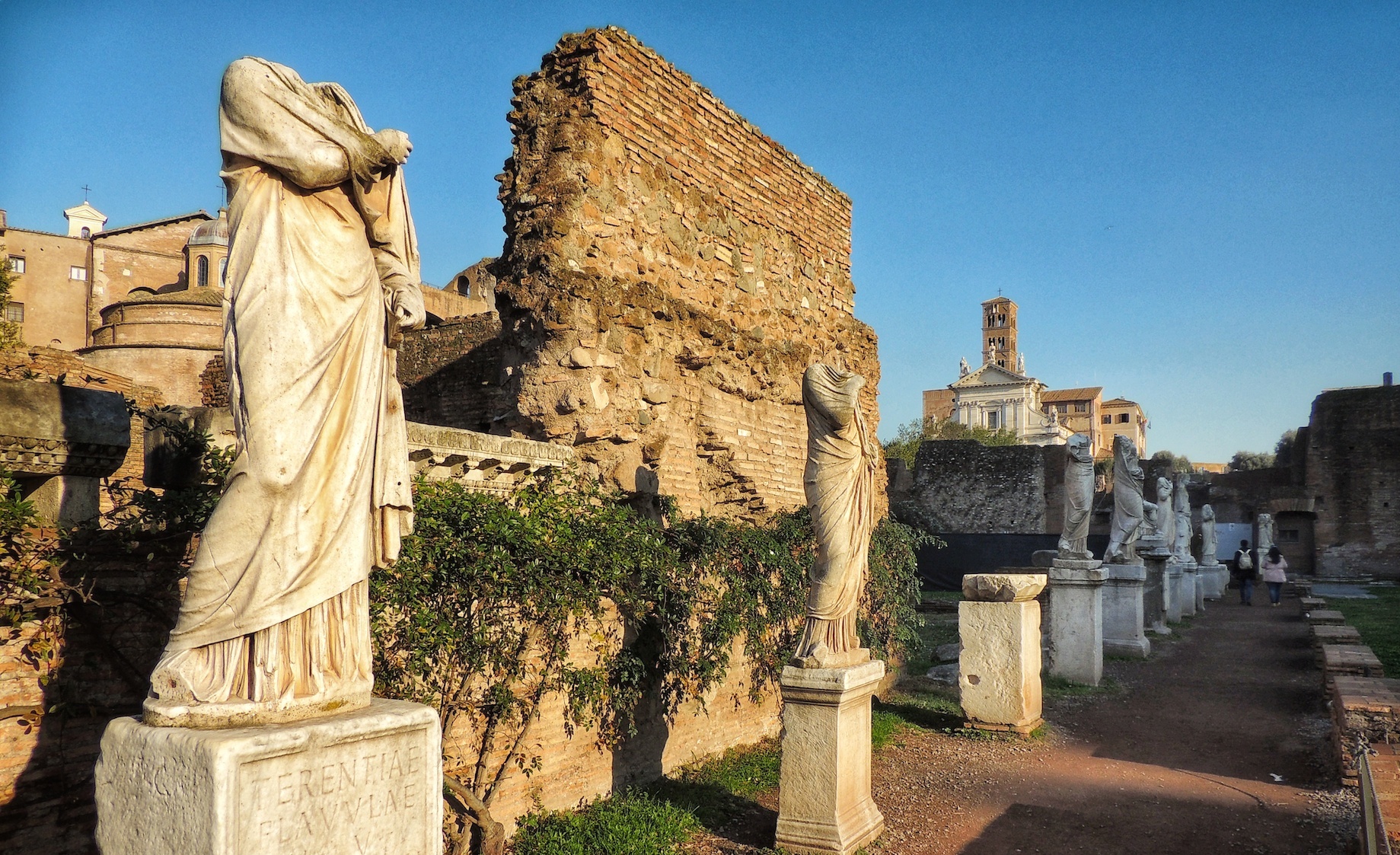 Today their house remains one of the most evocative ruins in the Roman Forum, with their magnificent statues of the most important Chief Vestals looking down at us from across the centuries, and it doesn’t take an enormous leap of imagination to picture the priestesses living out their 30 years of service in these beautiful surroundings.

If you’d like to learn more about the fascinating lives of the Vestal Virgins and the complex lives lived by women in antiquity, then be sure to check out our latest virtual tour: The Women of Rome: Growing up Female in a Man's Rome.