Endless stories and mysteries of a stunning fortress nearby the Vatican 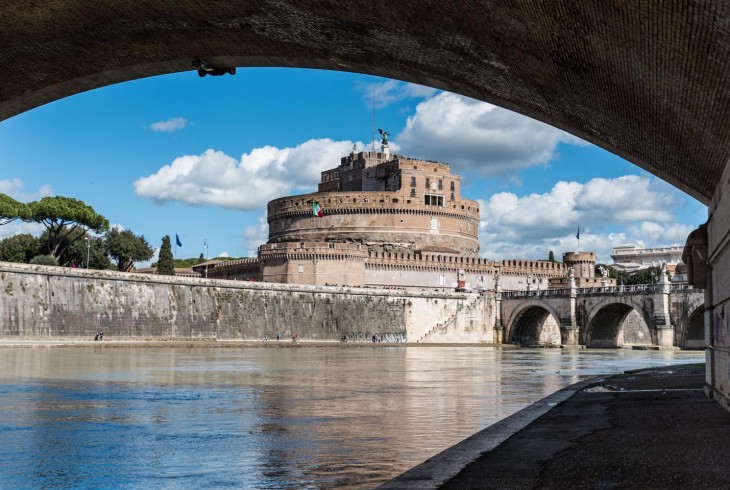 Fortress of the Angels: the Mysteries and Histories of Castel Sant’Angelo

Walking along the Tiber at night, the idle wanderer will inevitably come across a miraculous sight as they follow along the river’s bend; a team of heavenly angels, their gleaming white forms shining in the dark, spans the waters between the city center and the Vatican. At their end stands a massive hulk of brick and stone, high atop which looms their captain, the Archangel Michael, his outstretched wings illuminated against the night sky. 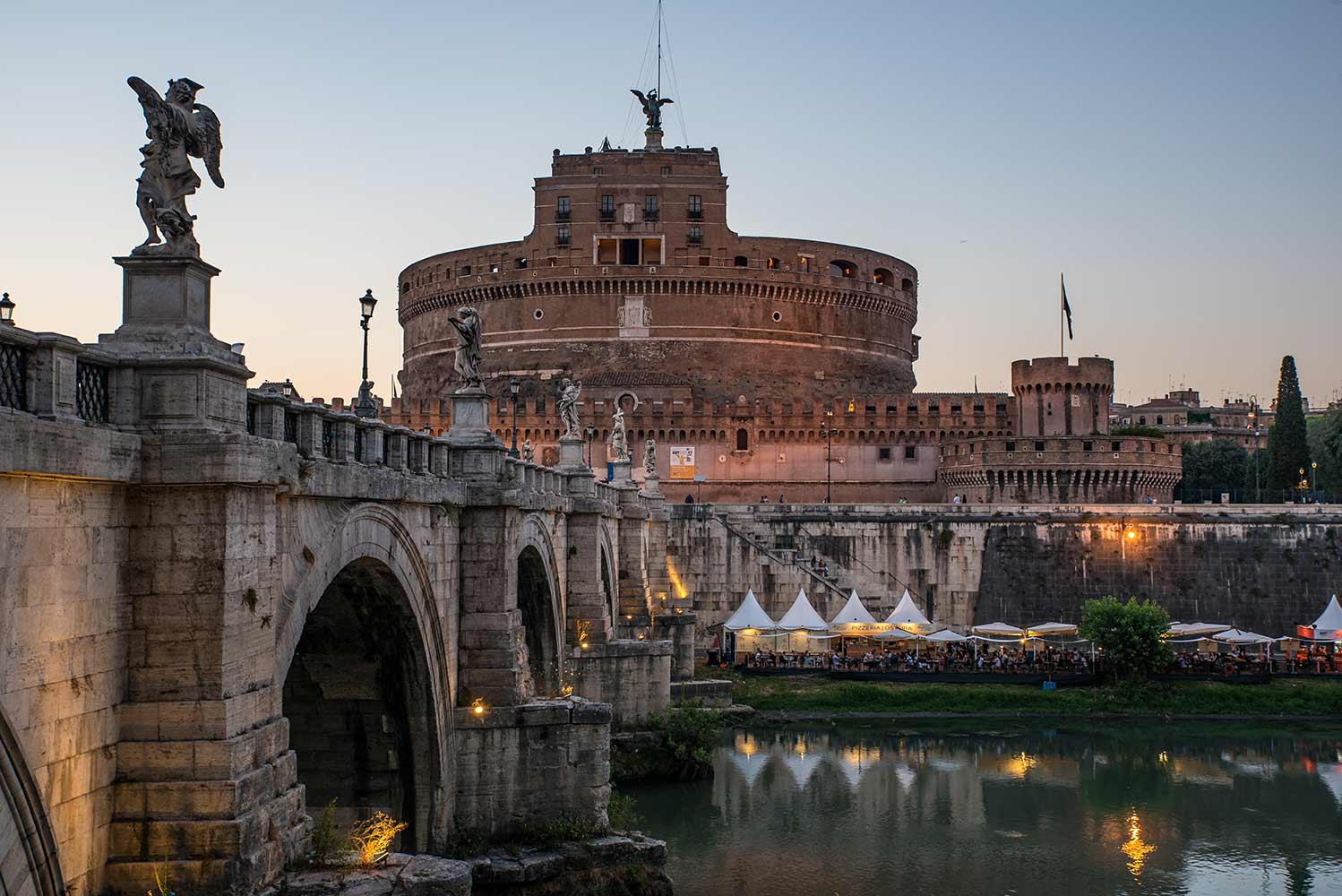 This is the Castle of the Holy Angel, better known as Castel Sant'Angelo. An ancient imperial tomb turned papal fortress, the site is very much worth visiting during the day, but after dark one’s imagination can really glimpse the surreal beauty of its nineteen centuries of history. Seeing Castel Sant’Angelo at night one can almost sense the ghosts of the Roman emperors buried here and the cries of the thousands of papal prisoners who languished in its dungeons.

The Archangel and the Plague: The Castel Sant’Angelo Statue and its Legend

The fortress takes its name from an old legend dating to the worst days of the Dark Ages. At the end of the sixth century AD, after Rome’s fall but still centuries before its Renaissance rebirth, a terrible plague fell upon the city. With thousands falling ill and the bodies of the dead choking the streets, Pope Gregory the Great led a procession through the city, praying to God to spare those who still lived.

Looking up to the old mausoleum of emperor Hadrian, long fallen into disuse and ruin, Pope Gregory had a vision of a radiant figure high atop the massive tomb. It was an angel, glowing brightly and brandishing a sword; as the pope watched, the angel lowered his weapon and returned it to its sheath. The meaning was clear: the plague was over and God’s wrath had been put to rest.

Today the statue on top of Castel Sant’Angelo commemorates this story. The current bronze version dates from the 1700s, but replaces an older version, in marble, that stood in the same spot. The sculpture of the archangel Michael serves as a reminder to the inhabitants of this Catholic capital that God’s mercy is present even when things look their worst. 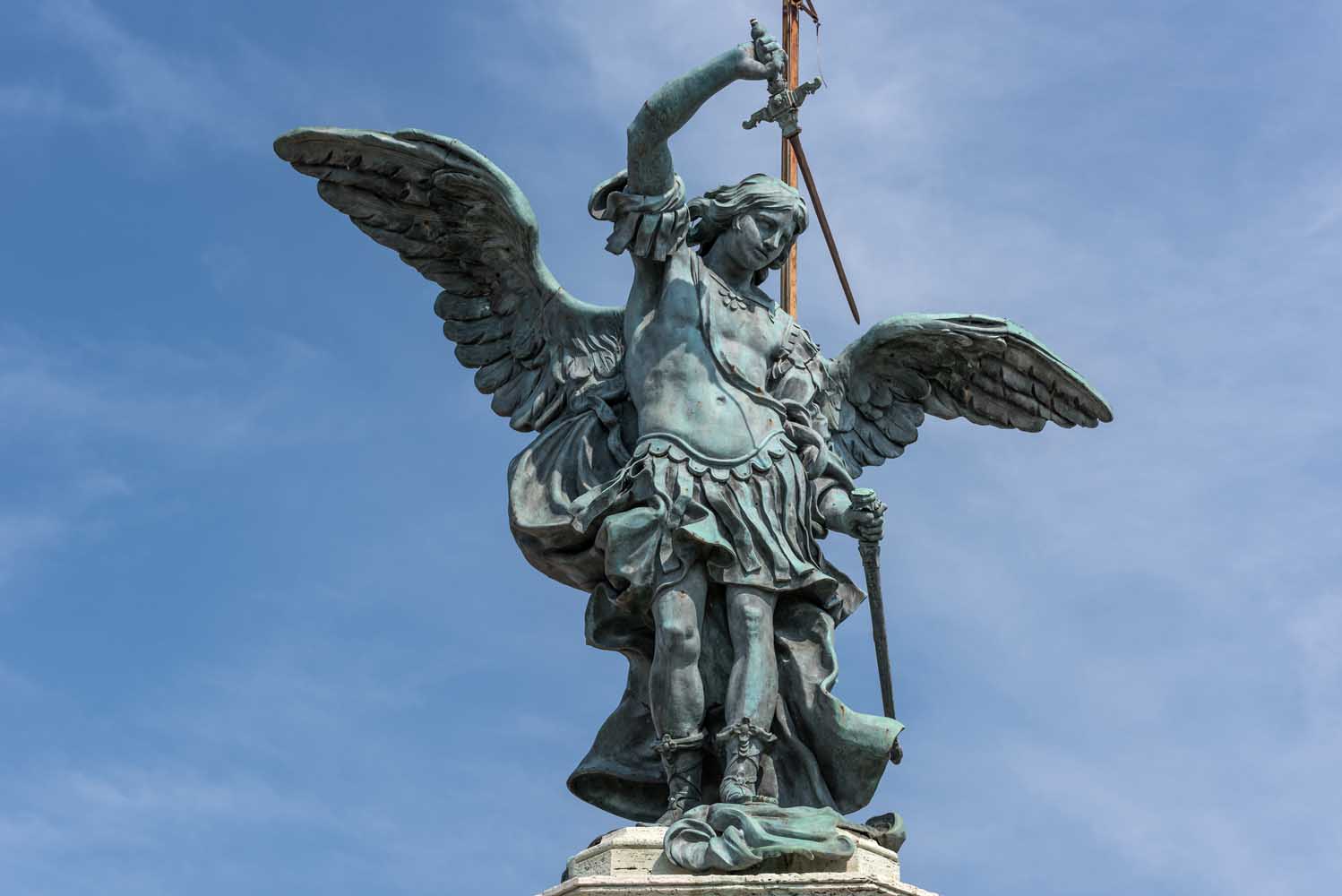 Long before space was controlled by the Church, however, it was a major monument honouring the pagan emperors of Rome. Hadrian, one of the greatest rulers of High Empire, built an immense cylindrical sepulchre designed, in form and scale, to rival that of his illustrious predecessor Augustus. Hadrian’s major innovation was that rather than walking straight into the main burial chamber, the visitor ascends a massive winding ramp that coils within the huge concrete tomb.

Even today, in order to reach the modern castle, you need to walk through the ancient mausoleum. Entering first into a massive antechamber, once covered in precious marble, you can see the niche where a colossal statue of Hadrian once stood. From there, you start walking up the giant ramp. As you go deeper into this huge mountain of brick and cement, it feels like a descent into the Underworld even if technically you’re walking uphill.

Finally, you reach the heart of the structure, the emperor’s burial chamber itself. While nothing remains of its rich decoration, you can still see the spaces reserved for the sarcophagi of the imperial family. Remarkably, only one piece remains; the purple porphyry lid of a sarcophagus, perhaps Hadrian’s own, has been flipped upside-down and serves as the baptismal font of St. Peter’s Basilica [learn more about our Vatican Tours].

Burials in Castel Sant’Angelo, after Hadrian himself, continued for most of the High Empire. Successive emperors and their wives were interred here, including Marcus Aurelius and the notorious Caracalla. Scholars still debate, however, how all of these sarcophagi could have possibly been arranged in the single known tomb chamber; perhaps, like the Pyramids of Egypt, other sealed rooms are still waiting to be found.

From Monument to Battlement: the Later History of Castel Sant’Angelo

The urban history of Rome is a history of re-use, with the medieval and Renaissance citizens making use of what the Ancients left behind. As an artificial mountain with sheer walls exceeding 160 feet, Hadrian’s mausoleum was a natural point of defence. The emperor had placed his mausoleum on the bend in the river to maximize its visibility; for a Papacy under attack, it was the perfect place for a fortress.

The transformation of the tomb into a castle was a gradual process; much of the fortifications were finalized under Pope Alexander VI, but interior decorations continued under later popes, including Leo X, who commissioned Michelangelo to design the facade of an interior courtyard. Indeed, by the late sixteenth century the interior resembled more of a palace than a castle; during the summer the Pope would stay here to enjoy the cool breezes off the river.

Despite all this ornament, the castle kept its military function and remained the final refuge of the papacy. Its most famous defence was an old trick from the Middle Ages: the so-called Passetto di Borgo is a concealed passageway that runs from the Vatican to Castel Sant’Angelo. In 1527 when Rome was being sacked, nearly the entire battalion of Swiss Guards was massacred, but Pope Clement VII made his escape through the secret passageway of Castel Sant’Angelo. 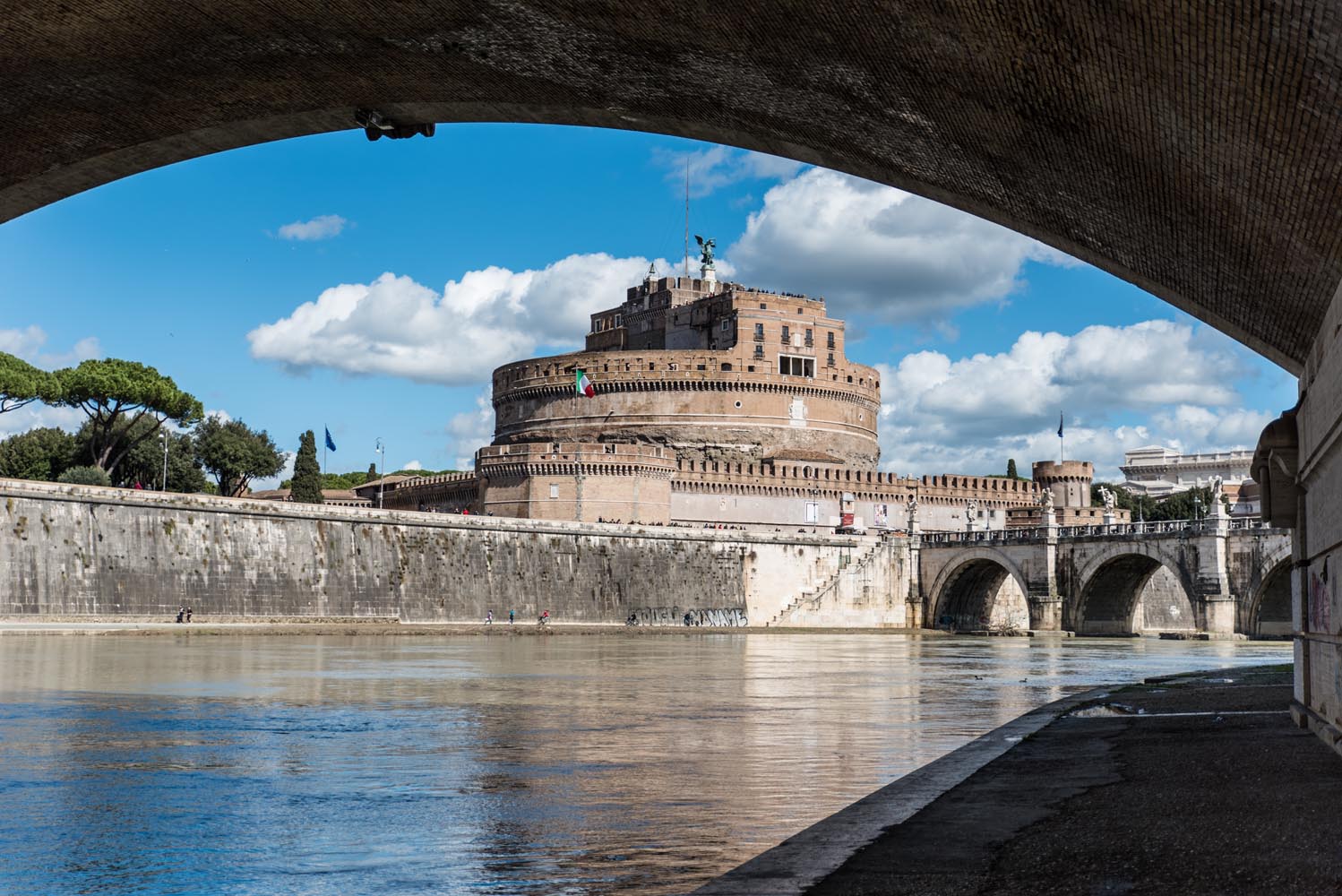 A Panoramic View with and Operatic History

As the city unfolds around you, you can make out all the important buildings of the historic center; those with sharp eyes will be able to make out the top of the Spanish Steps to the north-east and the Colosseum to the south-east. Toward the other side, the top of Castel Sant’Angelo offers the city’s best view of St. Peter’s Basilica.

Yet, while the view from Castel Sant’Angelo is reason enough to come up here, it’s also an important spot for opera buffs. On stages around the world, this exact terrace, angel and all, is recreated for Act III of Puccini’s opera Tosca. It is here that the titular heroine, overwhelmed by the death of her lover, throws herself over the battlements to escape capture by her enemies. Looking out over the city, one can easily understand why Puccini chose to stage his emotional climax at this breathtaking site. 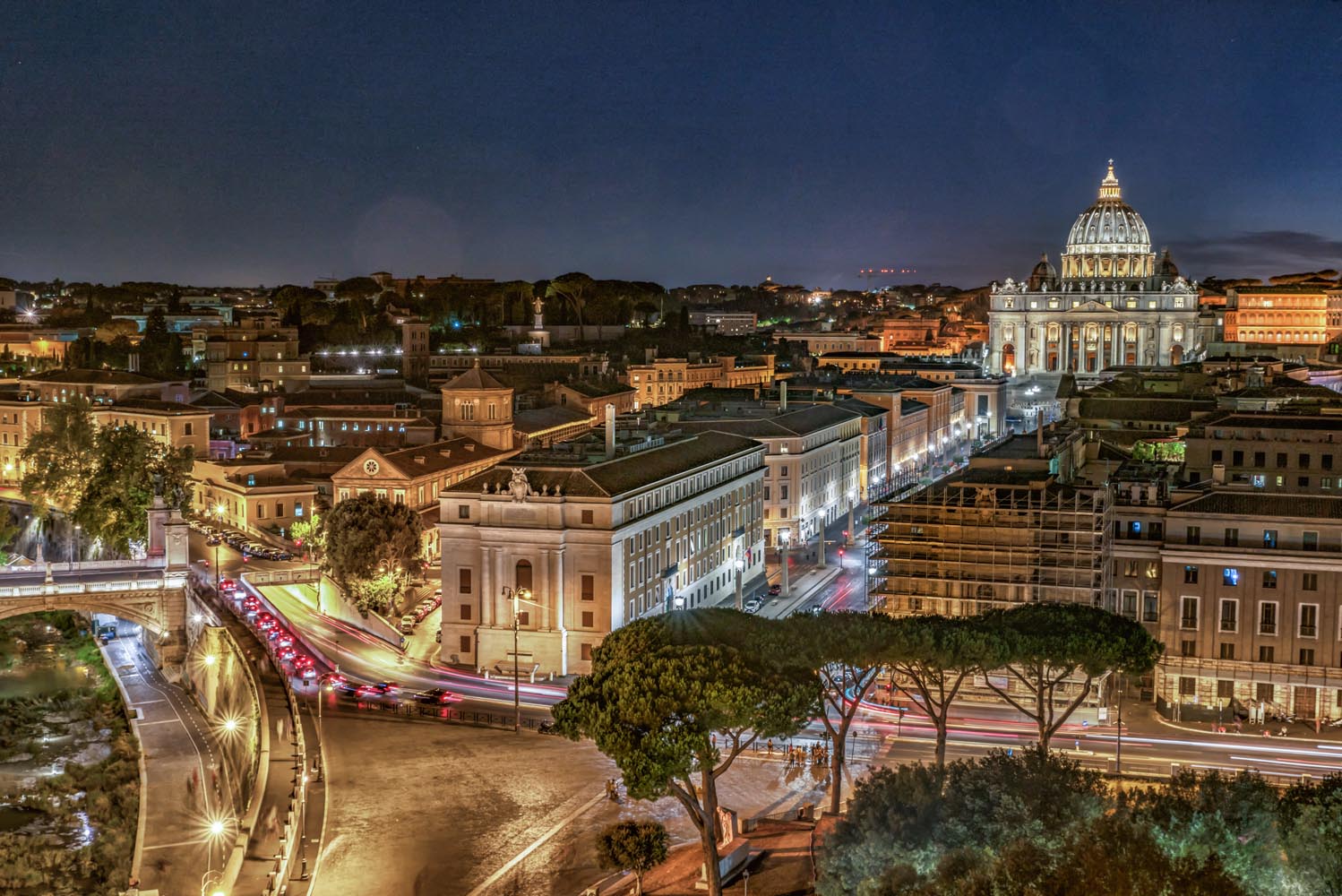 As a historic monument built as a fortress, Castel Sant’Angelo may present challenges to visitors with mobility issues.

Where is Castel Sant’Angelo?
Castel Sant’Angelo is located right on the river Tiber on the west (Vatican) side. It is directly east of St. Peter’s Basilica and only a few minutes walk north-west from Piazza Navona. While you can approach it from behind, the best way to experience it is by crossing the Bridge of the Angels from the historic center.

Explore the secrets of Castel Sant’Angelo as part of our Secret Rome Tour for a deeper appreciation of the monument and its artistic treasures. 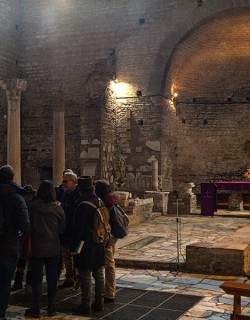