Who is Buried in the Pantheon? Artists and Kings in Rome’s Temple to all the Gods 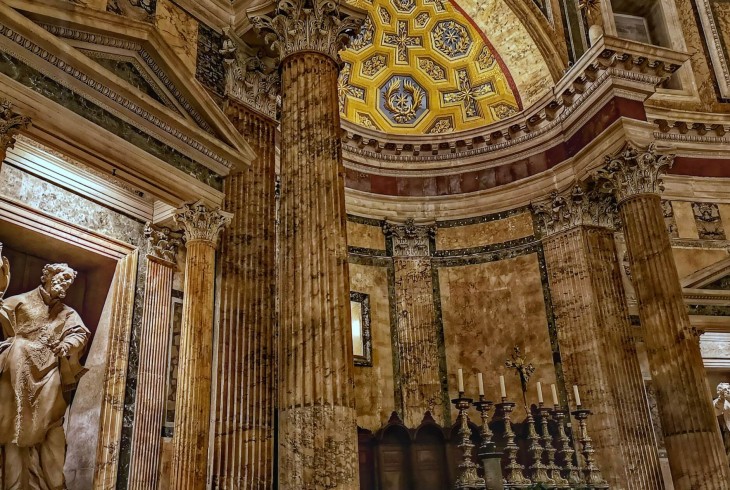 You might know the Pantheon in Rome for many things. The best preserved classical building in the Eternal City, Rome’s ancient temple to all the gods boasts the largest unsupported concrete dome ever built. Or perhaps you remember the temple’s stunning hole in its coffered roof, the so-called oculus that floods the interior with rays of sunlight. Maybe the soaring columns of its entrance portico on Piazza della Rotonda instead catch your eye, 40-foot granite monoliths brought all the way from Egypt, or the nearly 2,000 year-old bronze doors that guard the temple’s entry. Yes, the remarkable Pantheon is unforgettable for countless reasons. 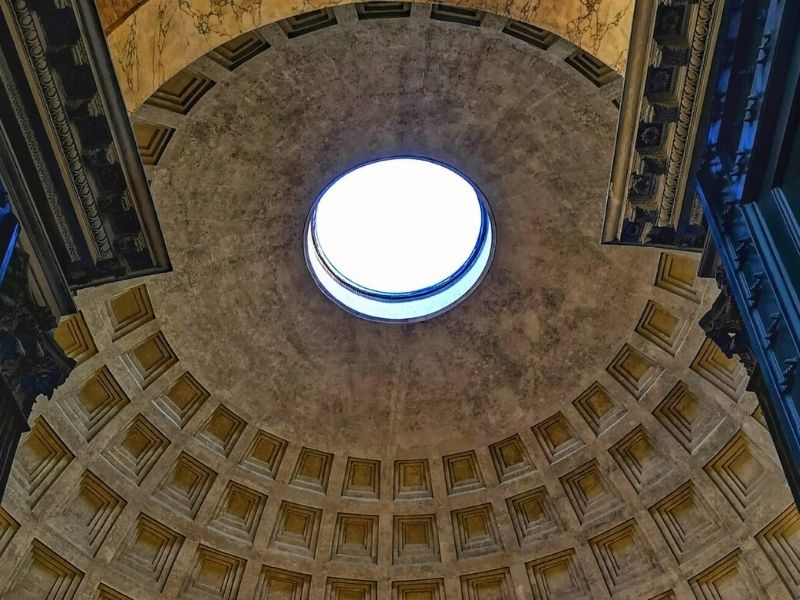 But did you know that the ancient temple has also periodically served as a burial place for illustrious Italians over the centuries that it has done service as a Christian church? Raphael started a trend for artists to choose the Pantheon as their final resting place when he was interred here in 1520, whilst the first kings of a united Italy were buried in the Pantheon in imposing tombs in the closing decades of the 19th century. This week on our blog we’re profiling some of the most famous figures buried in the Pantheon, so read on to discover who you need to look out for on your next visit to Rome’s most enduring ancient monument. 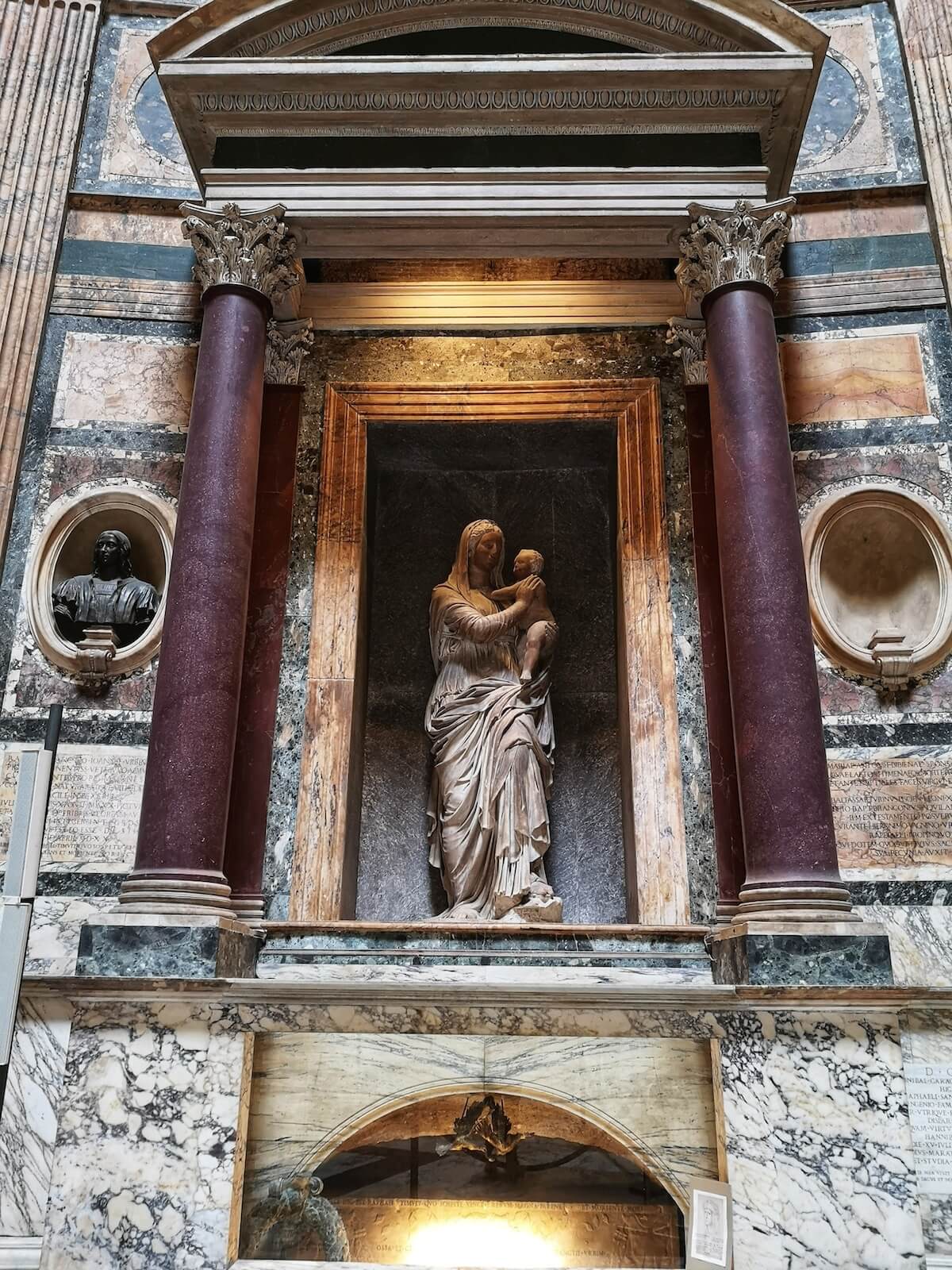 "Here lies Raphael, by whom Nature feared to be outdone while he lived, and when he died, feared that she herself would die.”

The prince of painters shuffled off this mortal coil on Good Friday in the year 1520, at the tender age of 37. Raphael was struck down with a raging fever just as he was putting the finishing touches on what was to be his final masterpiece, the Transfiguration now in the Vatican Museums. According to legend the massive work remained at the base of his sickbed as the painter’s condition worsened, silent last will and testament to the man that would be hailed as the “God of Art” on his demise.

Widely known for his romantic dalliances and fondness for the fairer sex, the Renaissance rumour mill soon came up with the story that Raphael’s fever was caused by a syphilis infection after one tryst too many, and the story of the sexed-up artist brought low by his outsize appetites has stuck for centuries. New research suggests that Raphael actually suffered from a pulmonary disease which was aggravated by inappropriate medical treatment including blood letting. 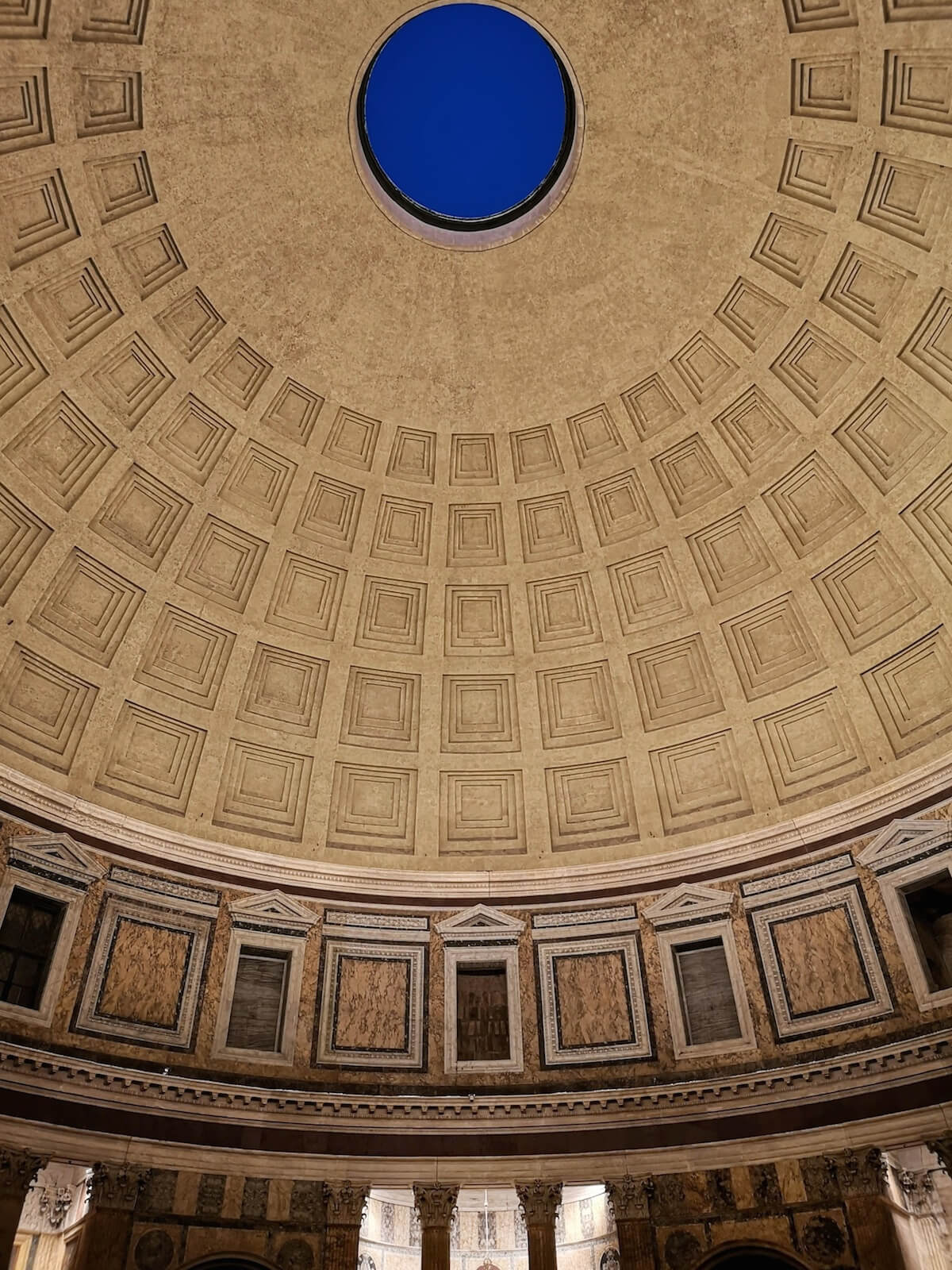 Whatever the cause, perhaps no artist’s death before or since has been mourned with greater feeling. Inspired by its perfect proportions, Raphael had requested that he be buried in the Pantheon (or, to give it its christianised name, Santa Maria ad Martyres) - the first artist to be accorded such an honour. Massive crowds flocked to see him off, and four cardinals dressed in full regalia carried his bier towards Rome’s greatest temple. Pope Leo X kissed Raphael’s hand, and with that the painter was gone, immortalised by Pietro Bembo’s memorable inscription and Lorenzetto’s sculpture of the Madonna del Sasso surmounting his tomb. 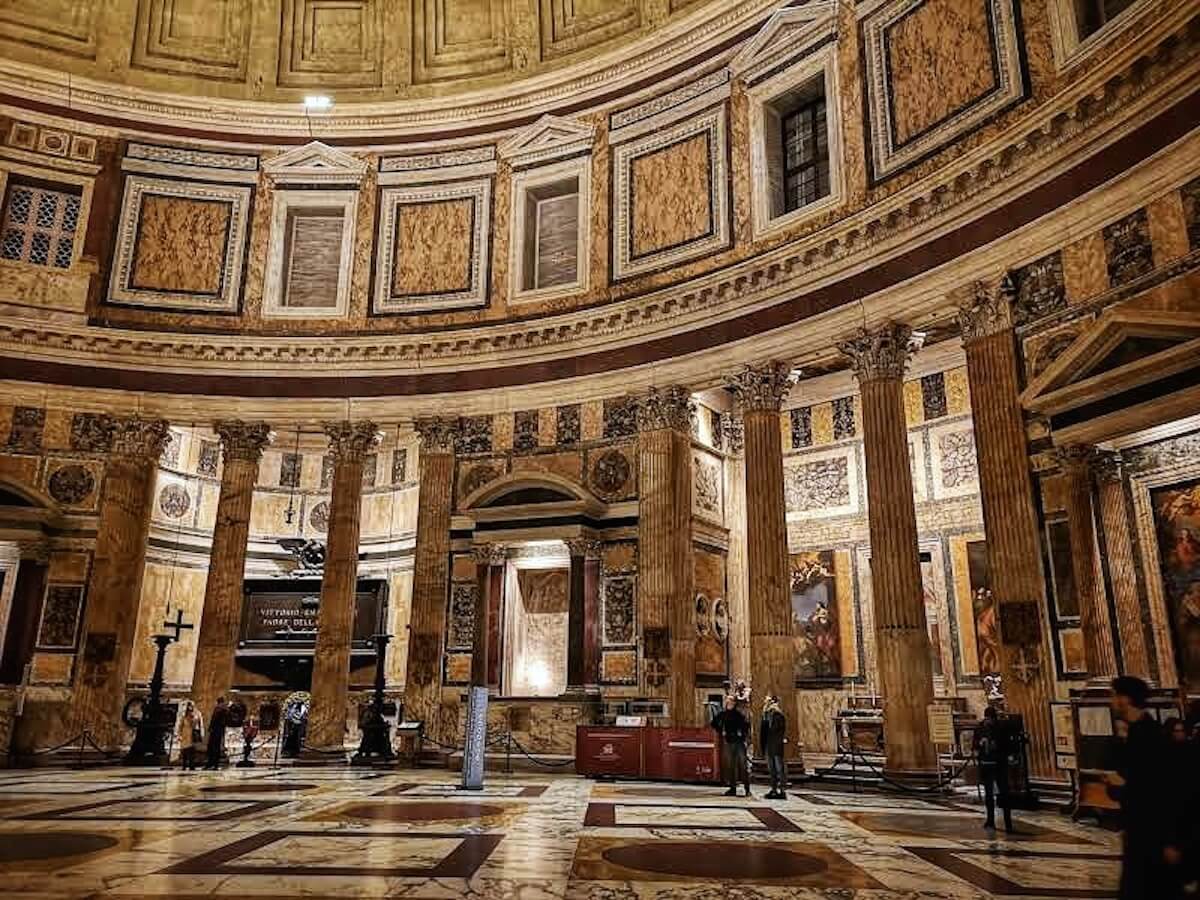 It is a testament to the legacy of our second artist that he loses little in comparison even to the divine Raphael, who started a trend for artists being buried in the Pantheon. Annibale Carracci came from an illustrious family of Bolognese painters, and along with Caravaggio is credited with ushering in the era of the Roman Baroque in the final years of the 16th century. Preternaturally adept in a variety of styles and genres, examples of Carracci’s talent are everywhere in Rome: from his portrait of a rustic bean-eater in the Galleria Colonna, widely considered one of the first genre paintings ever created, to the charming Rest on the Flight into Egypt in the Palazzo Doria Pamphilj, Carracci’s insistence on realism would have a seismic impact on Italian art.

Carracci's Love of the Gods in the Palazzo Farnese

But it is the awe-inspiring ceiling frescoed for the piano nobile of Palazzo Farnese on the command of Cardinal Odoardo Farnese that is perhaps his most memorable contribution to the artistic fabric of the Eternal City:. Depicting The Loves of the Gods, the lascivious divinities of antiquity cavort and canoodle across every inch of the massive ceiling, which Carracci worked on from 1597 up until just before his premature death in 1609. The Farnese ceiling would guarantee Carracci’s fame, but it also drove him to an early grave: devastated at Cardinal Farnese’s apparent indifference to his monumental achievement (Farnese famously paid Annibale a miserable sum for his decade of labour, even subtracting the cost of his meals from the final sum), Carracci fell into a deep depression which led to a debilitating stroke, and died of fever shortly thereafter.

Carracci’s death was mourned across Rome, and his body was carried by members of the painters academy of Saint Luke in a procession to the Pantheon, where the artist was deposited next to Raphael. 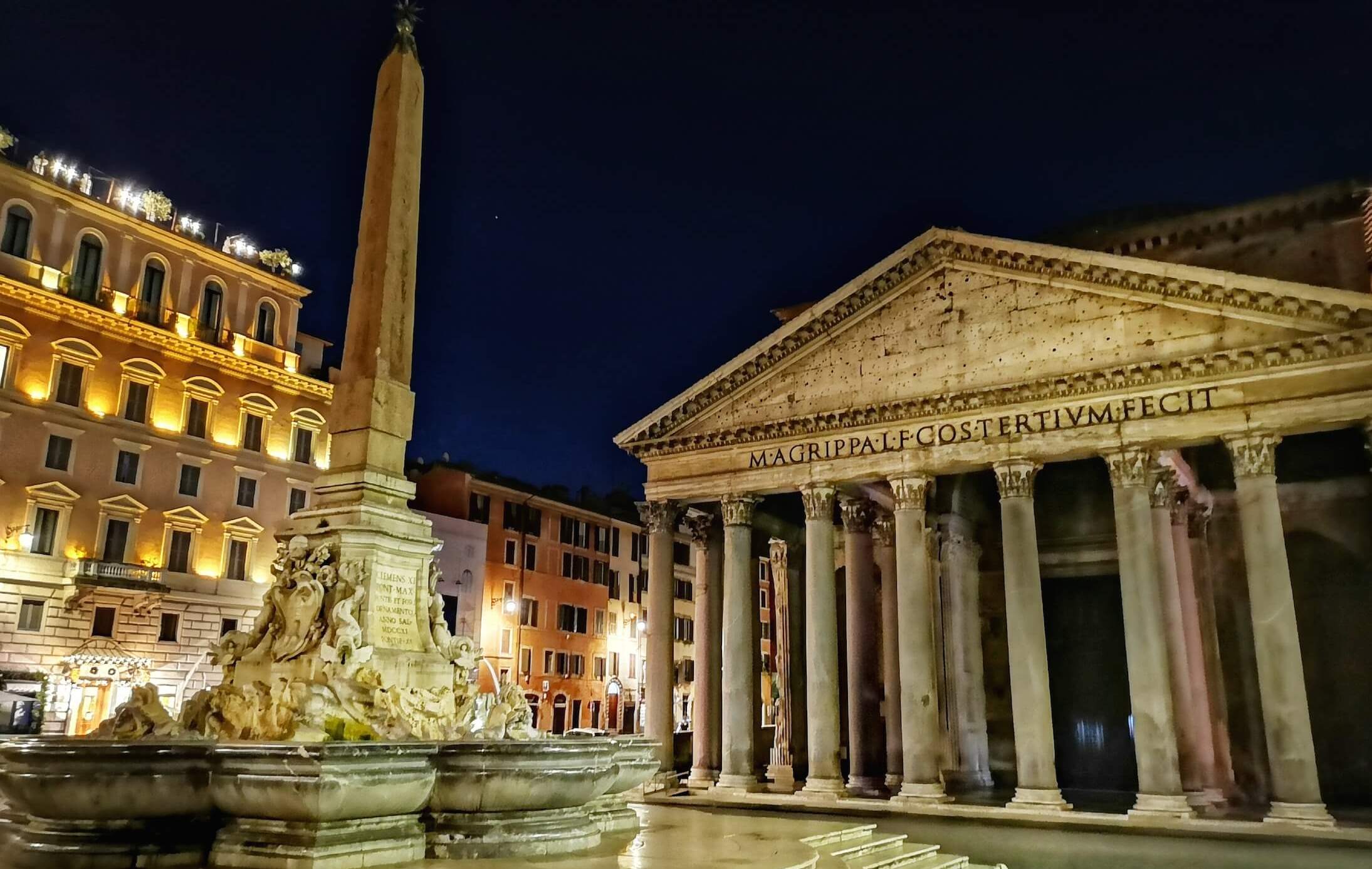 Less than a decade after Raphael’s untimely demise, Taddeo Zuccaro was born near Urbino, the birthplace of the great artist. Moving to Rome at the age of 14, the precocious young Taddeo was soon transfixed by the masterpieces everywhere around him, and spent his days sketching the city’s artistic treasures (Taddeo’s brother and fellow painter Federico would later immortalise him sketching Michelangelo’s Last Judgement in the Sistine Chapel and Raphael’s Loggia in the Villa Farnesina). Zuccaro soon established himself as one of the city’s most sought after frescoists, and although time has not been particularly kind to his reputation, the large-scale cycles he produced for the Palazzo Farnese in Rome as well as the Villa Farnese in Caprarola and Castello Orsini in Bracciano remain some of the finest examples of Mannerist art in Italy.

Taddeo was an important member of the Accademia dei Virtuosi del Pantheon, an association of illustrious artists who carried out charitable work amongst their peers and of which his brother was elected president in 1573. Thanks to their association with the group the brothers were buried together in the Pantheon. 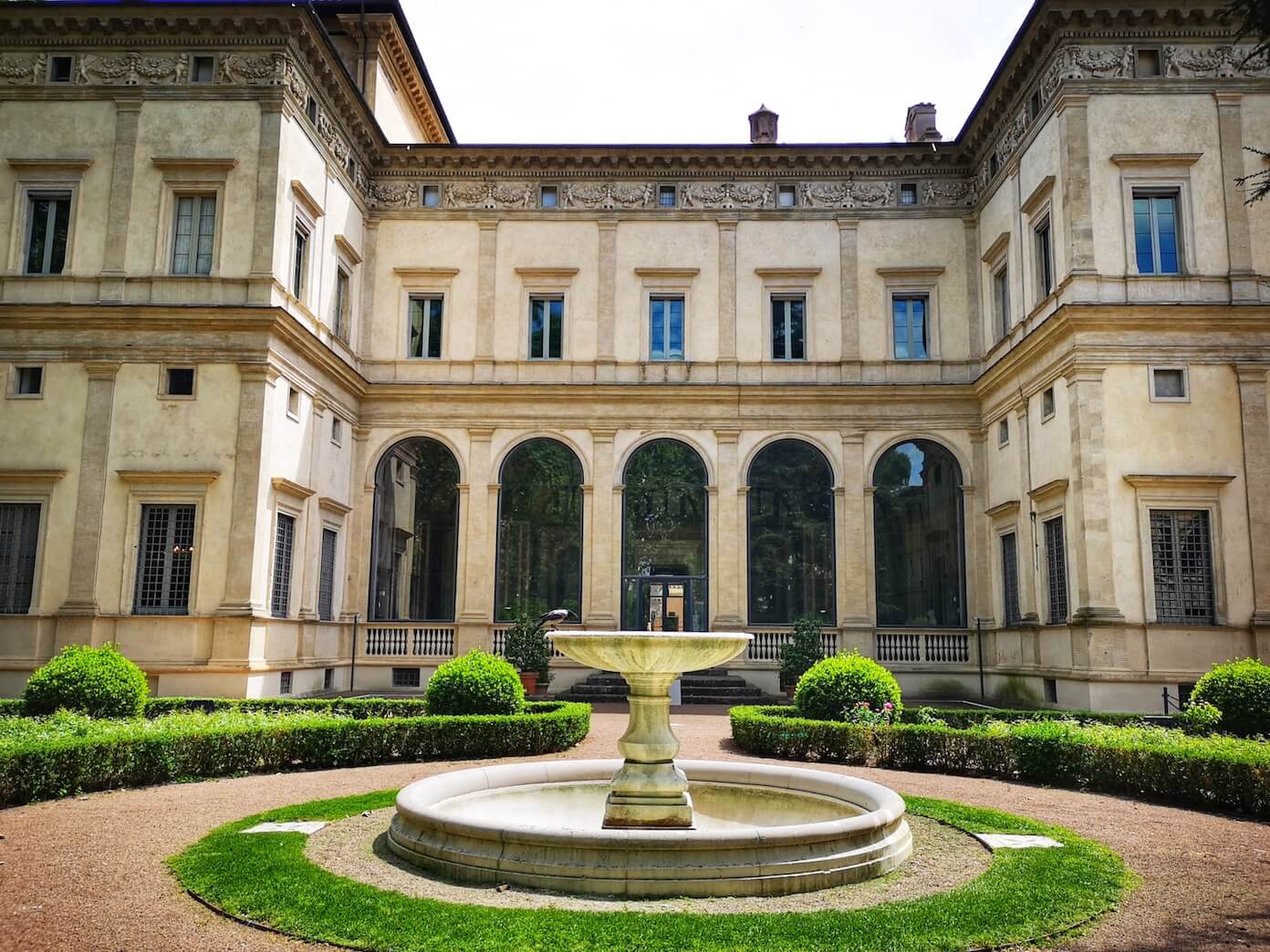 Painter, architect and all-round Renaissance man, Baldassare Peruzzi’s is probably best known as the architect behind the stunning Villa Farnesina, airy Renaissance hideaway of Papal banker Agostino Chigi on the banks of the Tiber (where he worked with Raphael).

Peruzzi was also responsible for another of the most impressive architectural achievements of the Roman Renaissance - Palazzo Massimo aloe Colonne on Corso Vittorio Emmanuele. The palace’s unique curving facade was dictated by the curvature of Domitian’s ancient racetrack beneath which were used as foundations for the 16th-century edifice. Each year the palace throws open its doors to the public on March 16th to commemorate the miraculous (if temporary) resurrection of the young Paolo Massimo by Saint Philip Neri in 1583. 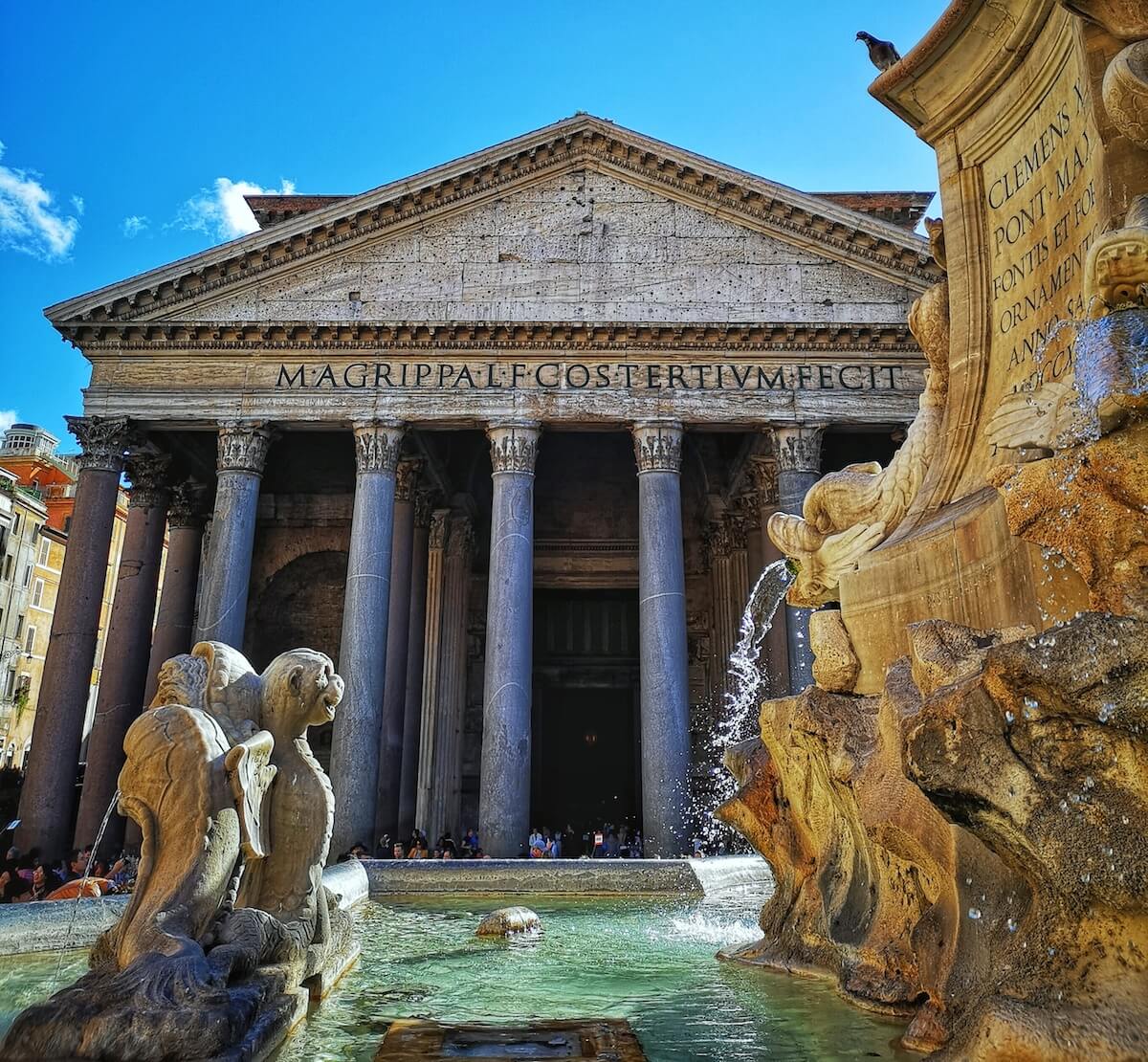 Peruzzi was to be reunited with his old collaborator Raphael on his death in 1536, when he too was accorded the honour of being buried in the Pantheon according to his wishes. Like Raphael, Peruzzi was obsessed with the architectural perfection of the ancient temple, and numerous drawings and studies of it survive by his hand. The inscription on his funereal monument was dedicated by his wife Lucretia, and approvingly compares this ‘man of painting and architecture’ as a worthy equal to the masters of antiquity. 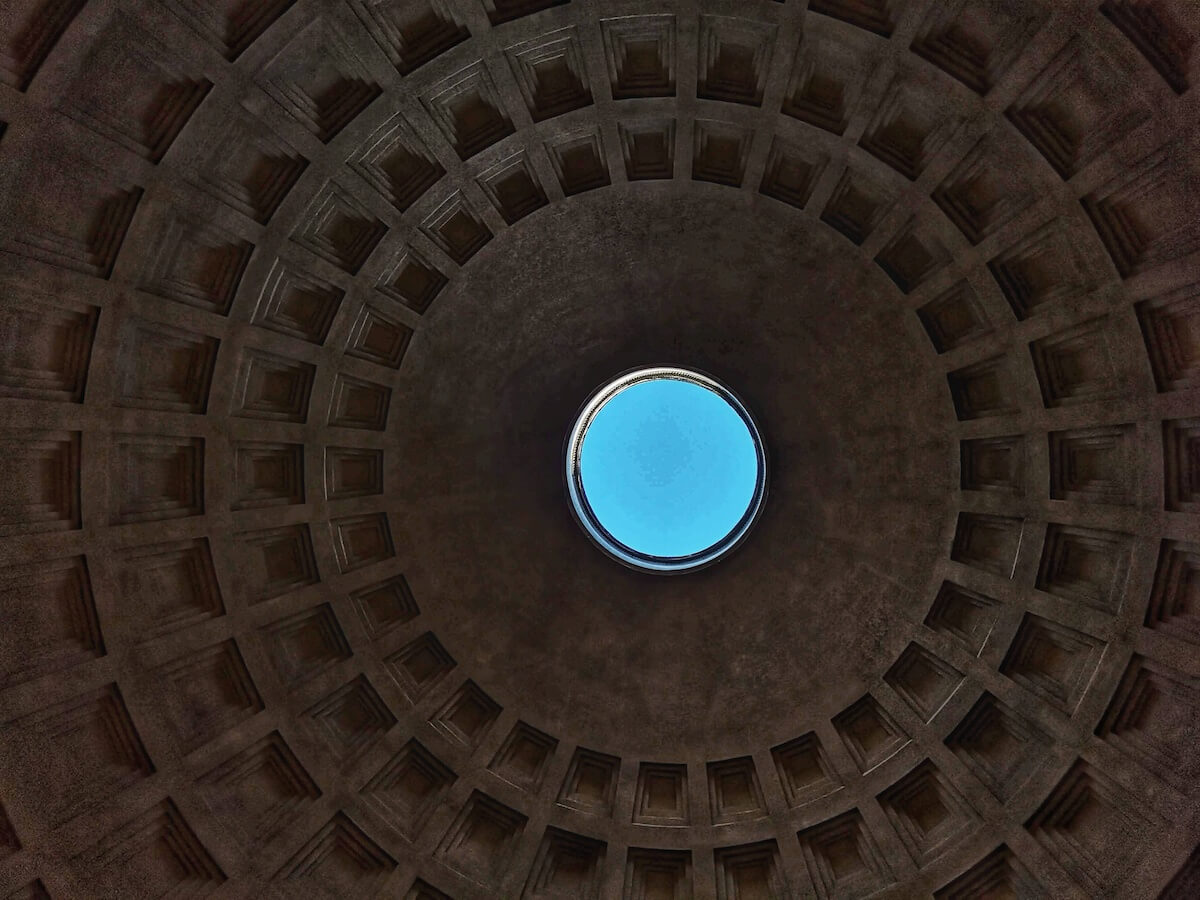 Perhaps somewhat less illustrious than his peers buried in the Pantheon, the sculptor Flaminio Vacca also earned his spectacular burial site thanks to his membership of the Accademia dei Virtuosi. A prolific presence on the art scene in late 16th century Rome, amongst his most notable surviving works are a statue of Francis of Assisi in Santa Maria Maggiore’s Sistine Chapel, sculptures of John the Baptist and John the Evangelist in the Chiesa Nuova, as well as the lion that guards the Loggia dei Lanzi in Florence (moved there by Grand Duke Ferdinand de’ Medici). The inscription on his tomb notes his perfectionism: ‘To Falminio Vacca/ Roman sculptor / who of his works / was hardly ever satisfied.’ 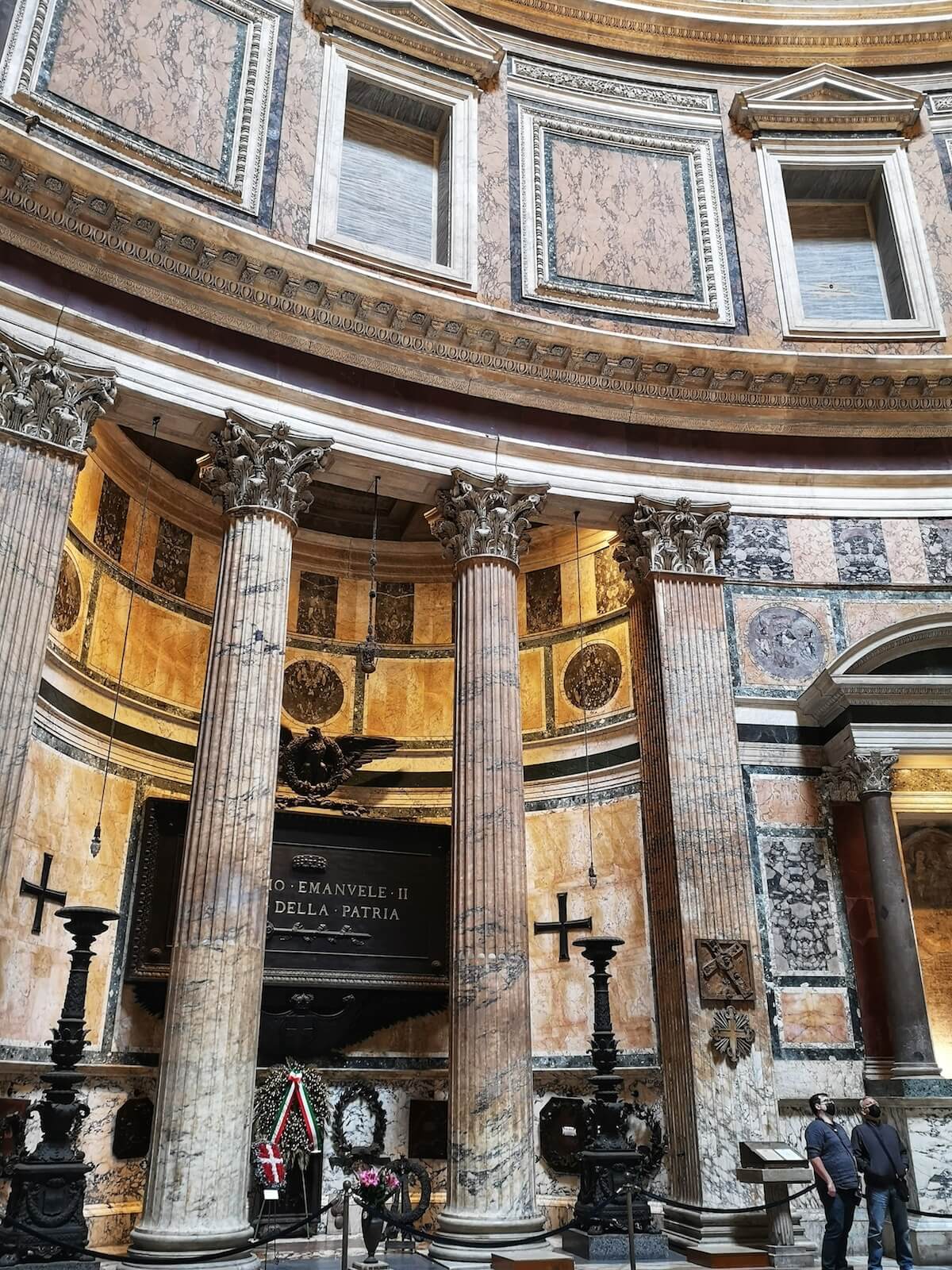 Whilst the great artists buried in the Pantheon might enjoy the most enduring legacies, the grandest tombs in the ancient temple are reserved for the first kings of a Unified Italy in the 19th century. Dominating one wall of the interior is the tomb of King Vittorio Emanuele II, whose ascension to the throne was a key moment in the creation of the modern Italian state. The king is celebrated as “Padre della Patria,” or “Father of the Homeland” in massive lettering on his imposing sepulchre, which is guarded over by members of the  Honour Guard to the Royal Tombs of the Pantheon.  The Savoy family coat of arms, a white cross on a red background, completes the ensemble. 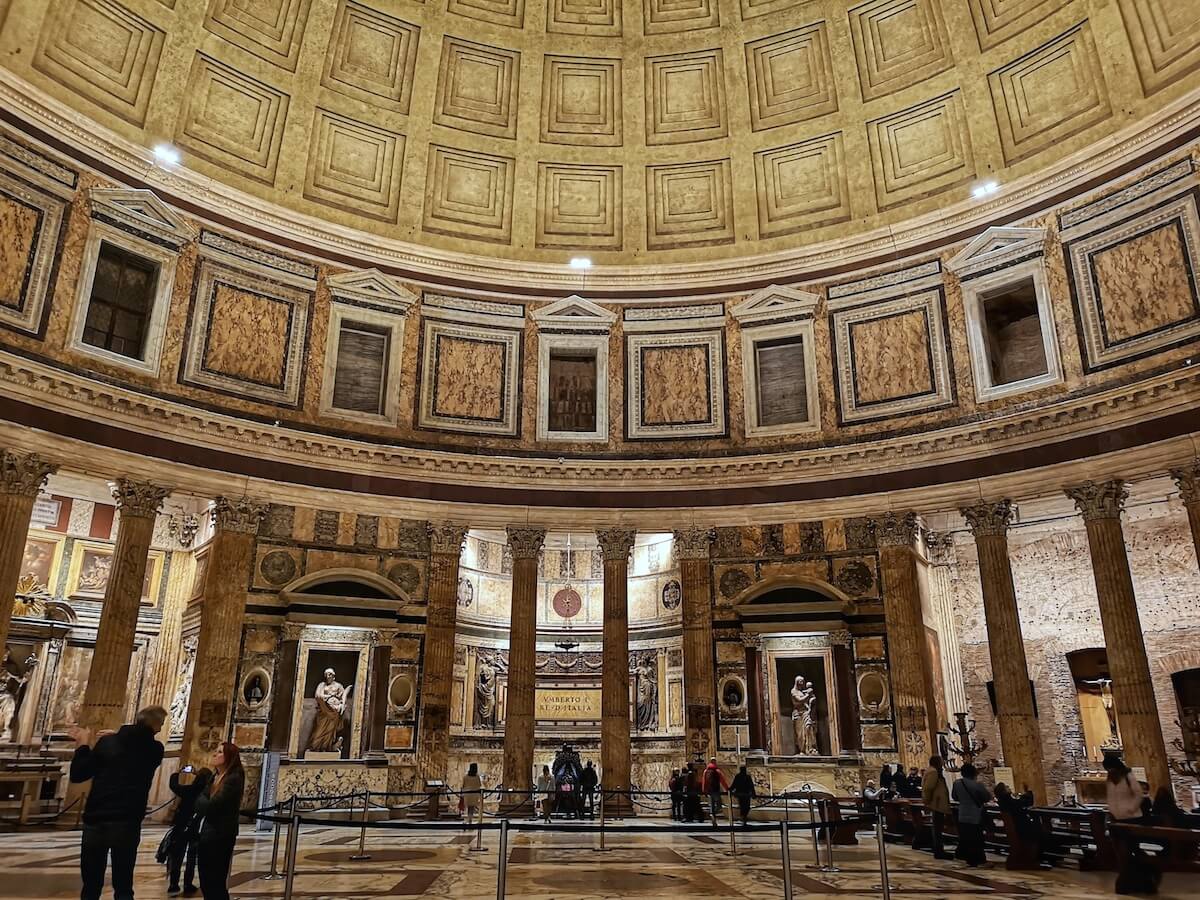 Like father, like son. On Vittorio Emanuele II’s death in 1878, his son ascended to the throne as King Umberto 1st. Umberto reigned for more than two decades before being assassinated by an Italian-American anarchist in Monza on 29 July 1900. Buried alongside his father in the Pantheon with great ceremony, Umberto’s tomb takes the form of a massive slab of porphyry decorated with lion heads. Interred in the same tomb is Umberto’s wife Margherita, to whom the classic pizza of the same name was allegedly dedicated during a royal visit to Naples in 1889.