The Bridge of Sighs: All About Venice’s Most Famous Bridge 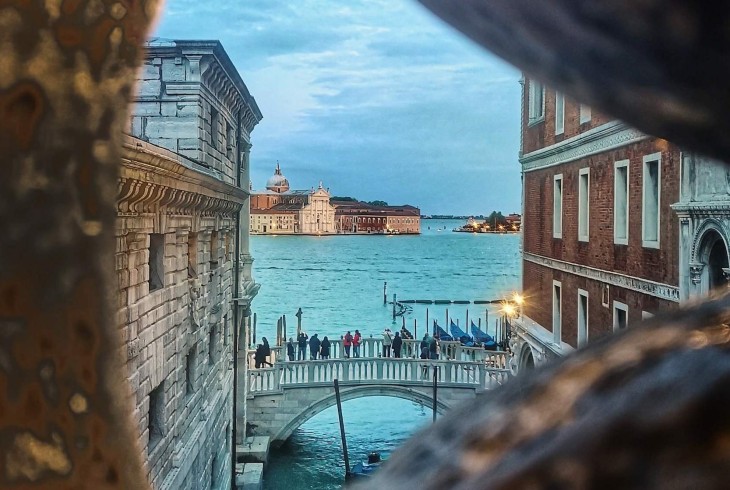 "I stood in Venice, on the Bridge of Sighs;⁣ /⁣ A palace and a prison on each hand:⁣⁣ / I saw from out the wave her structures rise⁣⁣ / As from the stroke of the enchanter’s wand"

Ah the Bridge of Sighs! Is there anyone who can resist the enchanting charms of Venice's most iconic bridge? There are over 400 bridges in the city of canals, but few can compare to the slender sliver of white stone with the romantic nickname spanning the Rio del Palazzo. It’s an obligatory stop on any trip to Venice, and the romantic span has enchanted generations of tourists visiting the Serenissima. Looks can be deceiving, however, and the delicate bridge known in Italian as the Ponte dei Sospiri has a fairly dark backstory.

Located in the Doge's Palace complex, Venice's Gothic canalside bastion of power, the covered bridge was constructed in the opening years of the 17th century to link the palace's old prison and courtrooms with a newly constructed slammer across the narrow canal.⁣⁣ According to legend, the bridge takes its name from the despairing sighs of prisoners gazing out at the beauty of Venice through the shuttered stonework as they were led away to their dark future of imprisonment.

The bridge’s  combination of beauty and intrigue makes it one of our favourite places in Venice. Find out all you need to know about the Bridge of Sighs before you go with our guide!

A Short History of the Bridge of Sighs 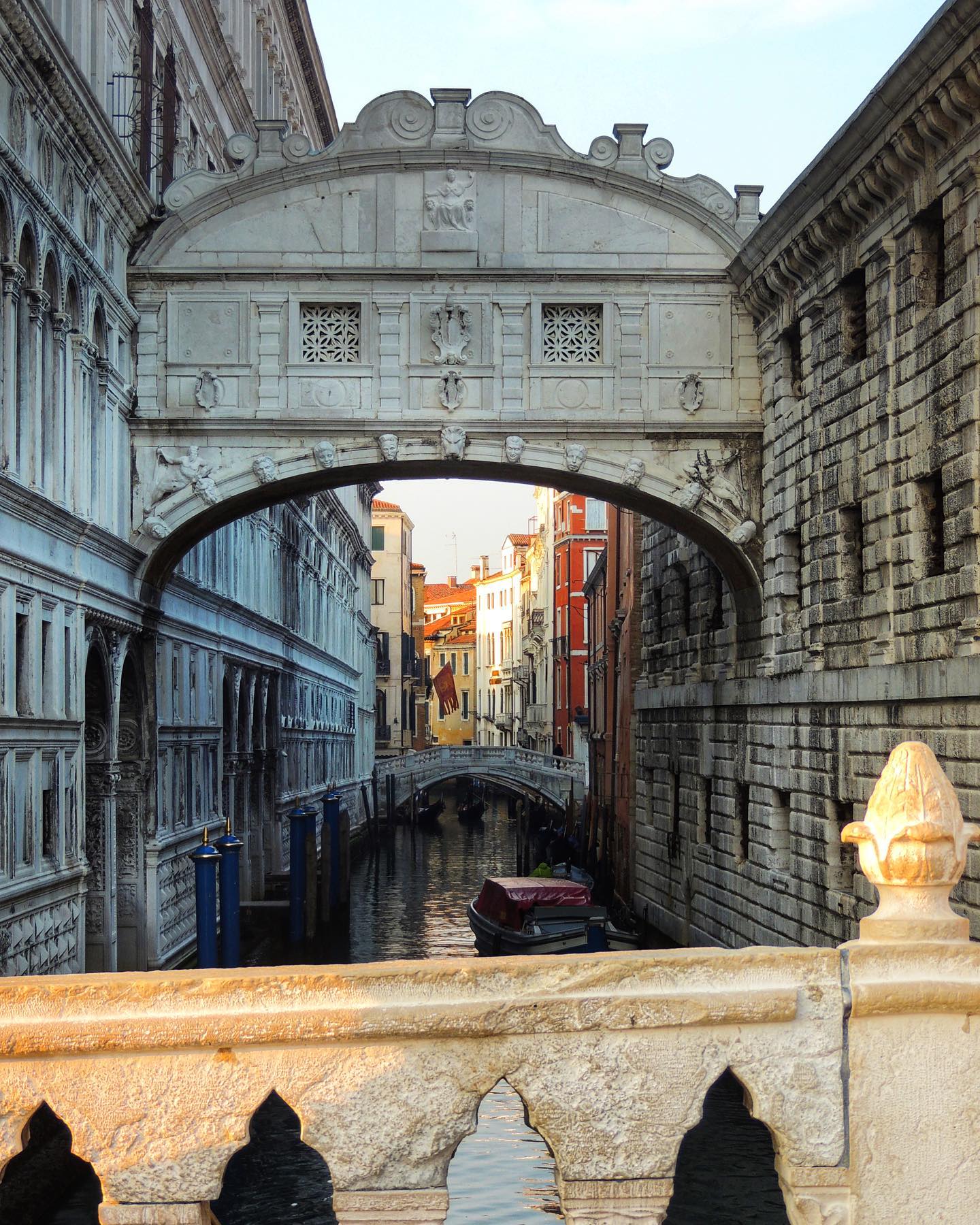 As the 16th century drew to a close, the Republic of Venice was one of Europe’s great super-powers, and its mighty fleets ruled the waters of the Mediterranean. The nerve-centre of this powerful empire was the magnificent Palazzo Ducale - not only home to the ruling Doge, but also site of the most important Venetian councils, courtrooms and prisons.

A series of dark and squalid cells known as pozzi, or wells, occupied the eastern wing of the palace, but had become increasingly unfit for purpose, and so a new structure was built to expand and modernise the state’s prison facilities. As the New Prisons were located in a separate building across the Rio del Palazzo canal, a bridge was required to link the buildings.

The bridge takes the form of a narrow covered walkway featuring two parallel passages which originally funnelled prisoners from their cells to the chambers of the magistrates where they stood trial. Finally completed in 1614, the elegant neoclassical bridge was the work of the architect Antonio Contino. Bridge-building, it seems, ran in the blood, as Antonio’s nephew was none other than Antonio da Ponte, designer of the Rialto Bridge.

The Ponte dei Sospiri is constructed from white Istrian limestone (quarried in what is present-day Croatia), and despite its grimly utilitarian purpose is highly ornamental: classical motifs like scrolls, volutes and pilasters decorate its exterior, whilst a series of grimacing sculpted heads gaze down at the waters of the canal from their perches on the bridge’s arch. The coat of arms carved onto the bridge is that of the reigning Doge Marino Grimani, who commissioned the edifice. Two small square windows meanwhile, almost entirely obscured by decorative lattice stonework, provide a small amount of light and a glimpse of the outside world to those passing within.

What’s in a Name? Why it’s Called the Bridge of Sighs 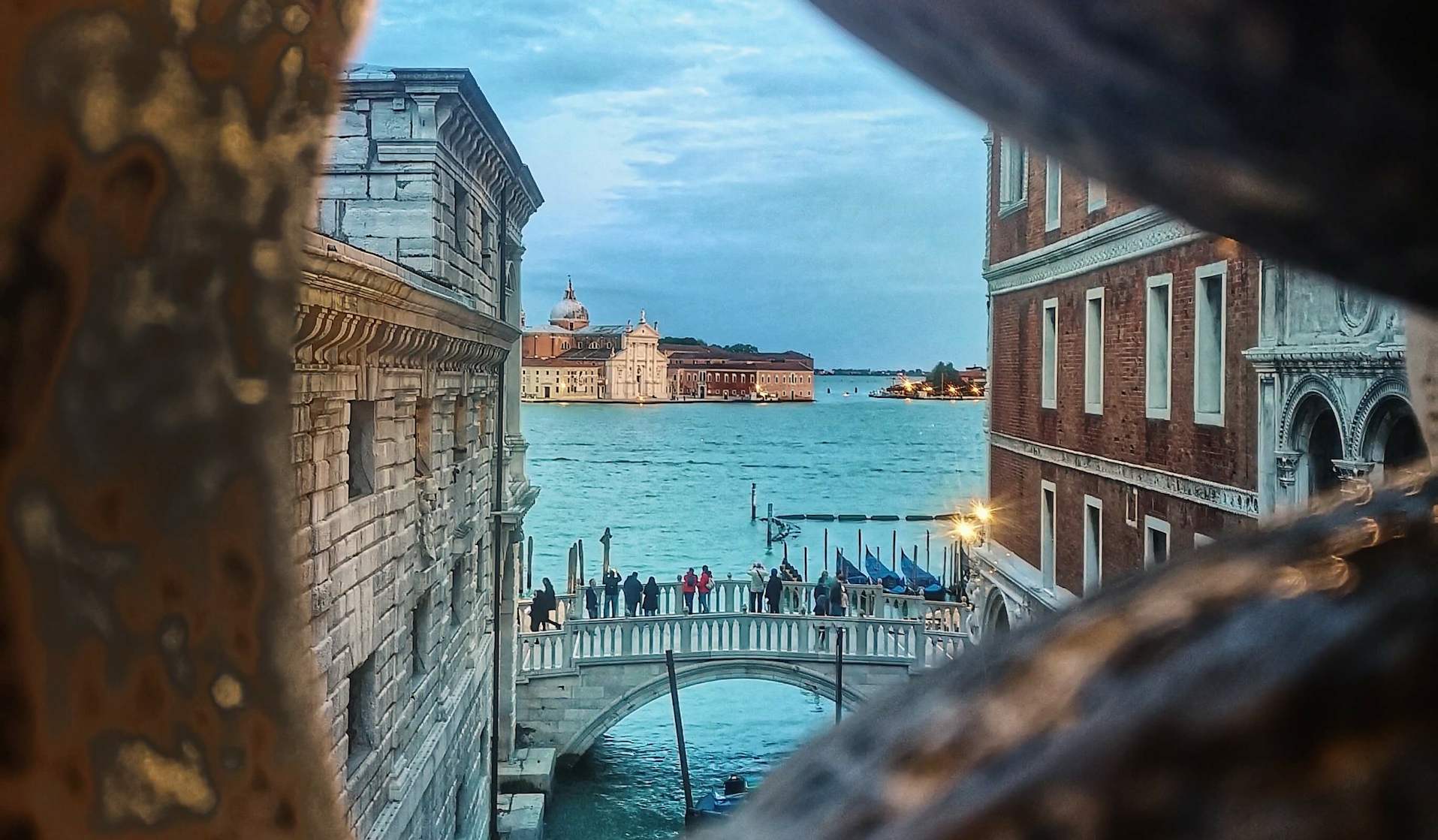 Despite being known around the world as the Bridge of Sighs, the walkway connecting the Doge’s Palace to the New Prisons only took on its romantic moniker sometime in the 19th century. The notorious adventurer and lothario Giacomo Cassanova saw little extraordinary about the bridge when describing his audacious escape from the prison in 1756, and it was only a century later that the great Romantic poet and occasional Venice resident Lord Byron immortalised the bridge with the name we know it by today in the fourth canto of his epic poem Childe Harold’s Pilgrimage.

The story goes that the bridge owes its name to the weary sighs of prisoners catching one last spectacular glimpse of Venice and the Grand Canal from the windows as they made their way towards the courtrooms or the prison cells from which they would never return.

Can I visit the Bridge of Sighs?

The Bridge of Sighs is located within the Doge’s Palace, and forms part of the Palazzo’s museum route. Visitors to the museum will reach the bridge after passing through the elegant staterooms and frescoed halls of the Palazzo, before getting to grips with Venice’s extensive early-modern armoury on the way to the forbidding New Prison. When you reach the bridge, make sure to peer out through the narrow gaps in the stone window grills to catch a glimpse of the island of San Giorgio Maggiore glittering splendidly in the waters of the Venetian lagoon. Thankfully a stretch in the Doge’s slammer is no longer a prerequisite for those wishing to cross the bridge, so you can happily sigh at the beautiful vista safe in the knowledge that, unlike the prisoners trudging across the bridge in centuries past, this won’t be your last glimpse of the Serenissima!

If you’d like to visit the Bridge of Sighs in context, Through Eternity Tours’ Essential Venice itinerary explores the Palazzo Ducale and the Bridge in detail.

What’s the best vantage point for views of the Ponte dei Sospiri? 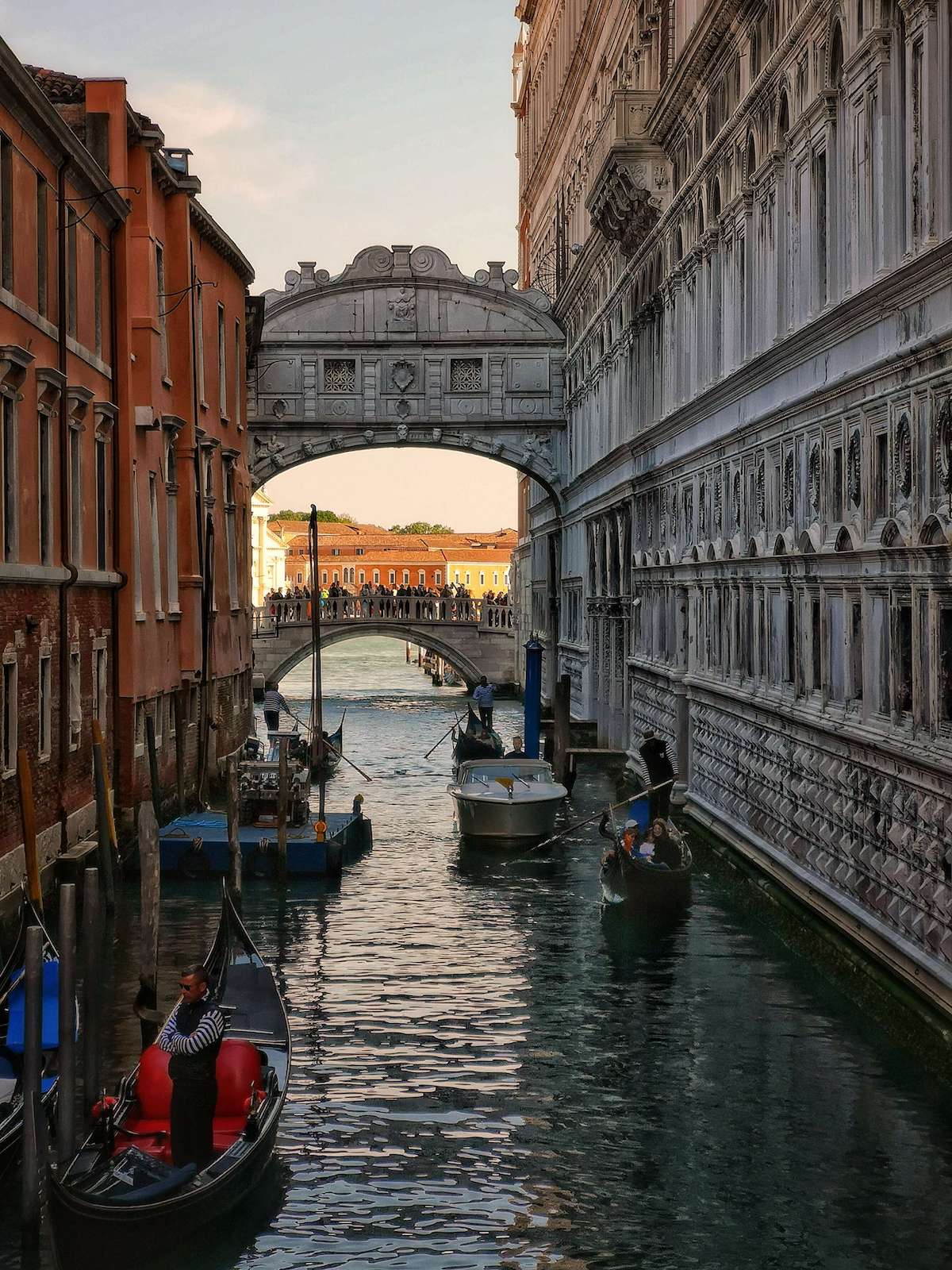 As the Bridge of Sighs is hemmed in on both sides by the elegant walls of the Palazzo Ducale on one side and the forbidding masonry of the prison on the other, there are only two vantage points from which the bridge is visible. Head to the 14th-century Ponte di Paglia which divides the San Marco and Castello sestieri where the Rio del Palazzo meets the Grand Canal for a great view of the diminutive bridge. Alternatively, loop around to the northern edge of Saint Mark’s square and cross the Piazzetta dei Leoncini (so-called for the purple lions that call the square home) until you reach the Ponte de Canonica. From here a picture-perfect view of the Bridge of Sighs opens up as if by magic in the dense urban fabric.

Through Eternity Tours offer a range of expert-led Venice small group tours and private itineraries, from tours of Saint Mark’s basilica and the Doge’s Palace to off-the-beaten track sites and visits to the islands of the Venetian lagoon. Check out our Venice tours page for more, and get planning your perfect trip to the Floating City!