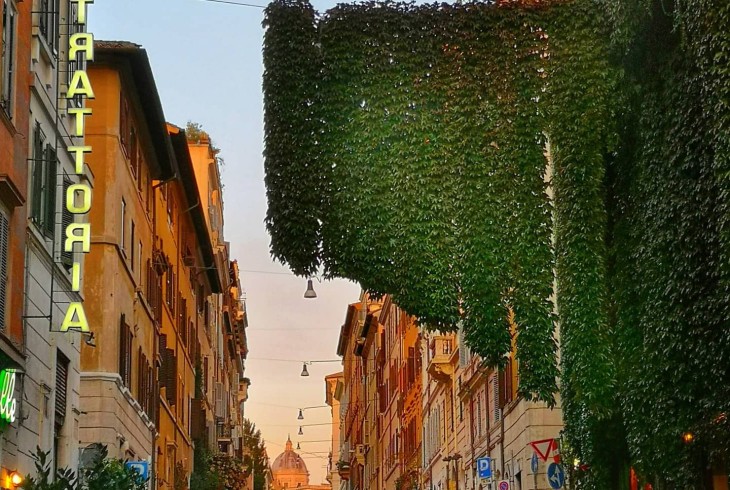 Rome is widely renowned as one of the world’s most beautiful cities, where magnificent churches, museums and archaeological sites lie in wait around every corner. But in the Eternal City, the urban fabric is perhaps the most impressive artwork of all. This week on our blog we’re profiling 10 of our favourite streets in Rome. From historic Renaissance streets to ancient Roman roads and hidden lanes, make sure to include these 10 beautiful Roman streets on your itinerary!

In the fascinating tangle of streets that surround Rome’s Piazza Navona, well-heeled Via dei Coronari might just be our favourite. Tracing the route of the ancient Via Recta, the arrow-straight road we see today was the brainchild of Pope Sixtus IV (patron of the Sistine Chapel)  in the late 1400s. One of the great pieces of urban planning in 15th-century Rome, Via dei Coronari was the first Renaissance street to be cut through the dense warren of the Eternal City’s medieval urban fabric.⁣⁣⁣⁣

Via dei Coronari was also the main street leading out of central Rome towards Ponte Sant’Angelo and the Vatican across the river, meaning that legions of early modern pilgrims traversed its cobbles every year on their way towards the most important church in Christendom. Always at the ready to make a quick buck, local street vendors flogged all manner of sacred items and keepsakes by the kilo to the pious visiting hordes, including rosary beads known as ‘corone di rosario’ - giving the street the name by which we know it today. ⁣⁣

Not everything about this wonderful street was quite so holy, however. The elegant surroundings also attracted some of the Renaissance’s most famous courtesans - the notorious Florentine Fiametta Michaelis, lover of Cesare Borgia, had a house on Via dei Coronari. So too did Tullia d' Aragona, whose amorous conquests, including the fabulously wealthy Filippo Strozzi, were matched only by her renown in poetry and philosophy.⁣⁣⁣

These days the street is home to antique dealers, art studios and one of the city’s finest places to get gelato. 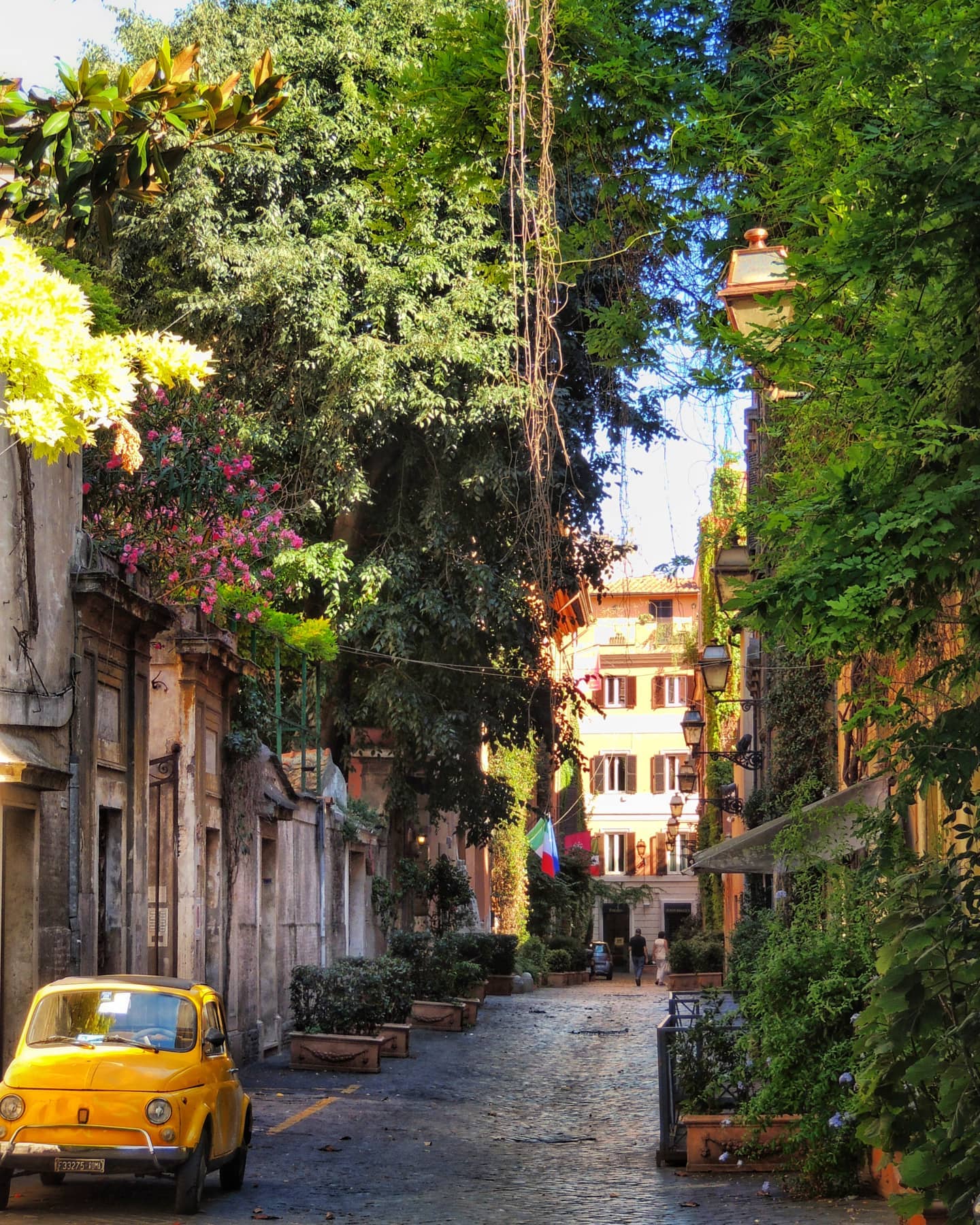 Home to Gregory Peck's charismatic American journalist in Roman Holiday and one-time real life domicile of the great director Federico Fellini, this elegant cobbled laneway hidden away just off Via del Corso has for centuries been a haven for expatriate artists holed up in the Eternal city.

Known as ‘La Strada degli Artisti’, or Street of Artists, the road’s association with the world of art goes all the way back to 1612, when the famous Baroque painter Orazio Gentileschi set up his workshop here. Look out for the Fountain of the Artists midway along the street: featuring easels and stools, compasses and antique masks as well as a bucket overflowing with paint-brushes and chisels at the very top, the fountain was installed in 1927 to commemorate this rich heritage.

Today tranquil Via Margutta is known for its well-heeled hotels, boutiques and ateliers - next time you find yourself on central Via del Corso, take a slight detour for a stroll along Via Margutta and drink in the atmosphere of centuries past. 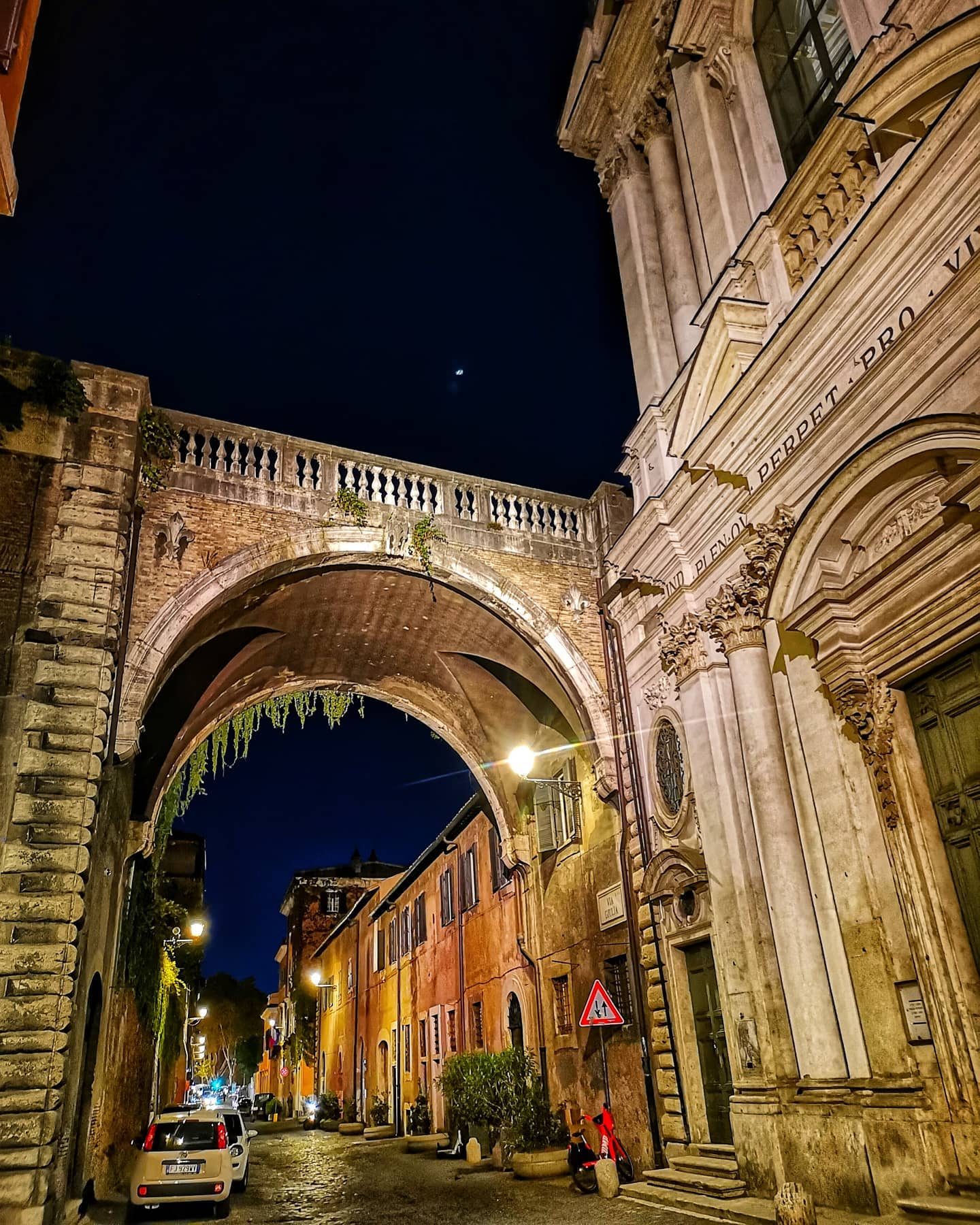 Via Giulia is the Renaissance street par excellence, designed in the first decade of the 16th century by star architect Donato Bramante on the orders of Pope Julius II. The elegant street is virtually traffic-free, a long stretch of historic palaces and churches winding its way through the heart of one of the most characteristic areas of the Eternal City.

Midway along the street, an elegant bridge wreathed in ivy spans the thoroughfare. During the design phase of the imposing Palazzo Farnese on the eponymous piazza, Michelangelo proposed to link the palace to the gardens of the Villa Chigi (now Villa Farnesina) just across the river in an echo of Florence's Ponte Vecchio.

The over-the-top plan never quite got off the ground, and all that remains today is this vestigial section known as the Arco Farnese built in 1603 leading nowhere over the via Giulia. It wasn't a total failure, however - the bridge provided the perfect vantage point for members of the family to watch processions and carnival celebrations as they made their way down the street. 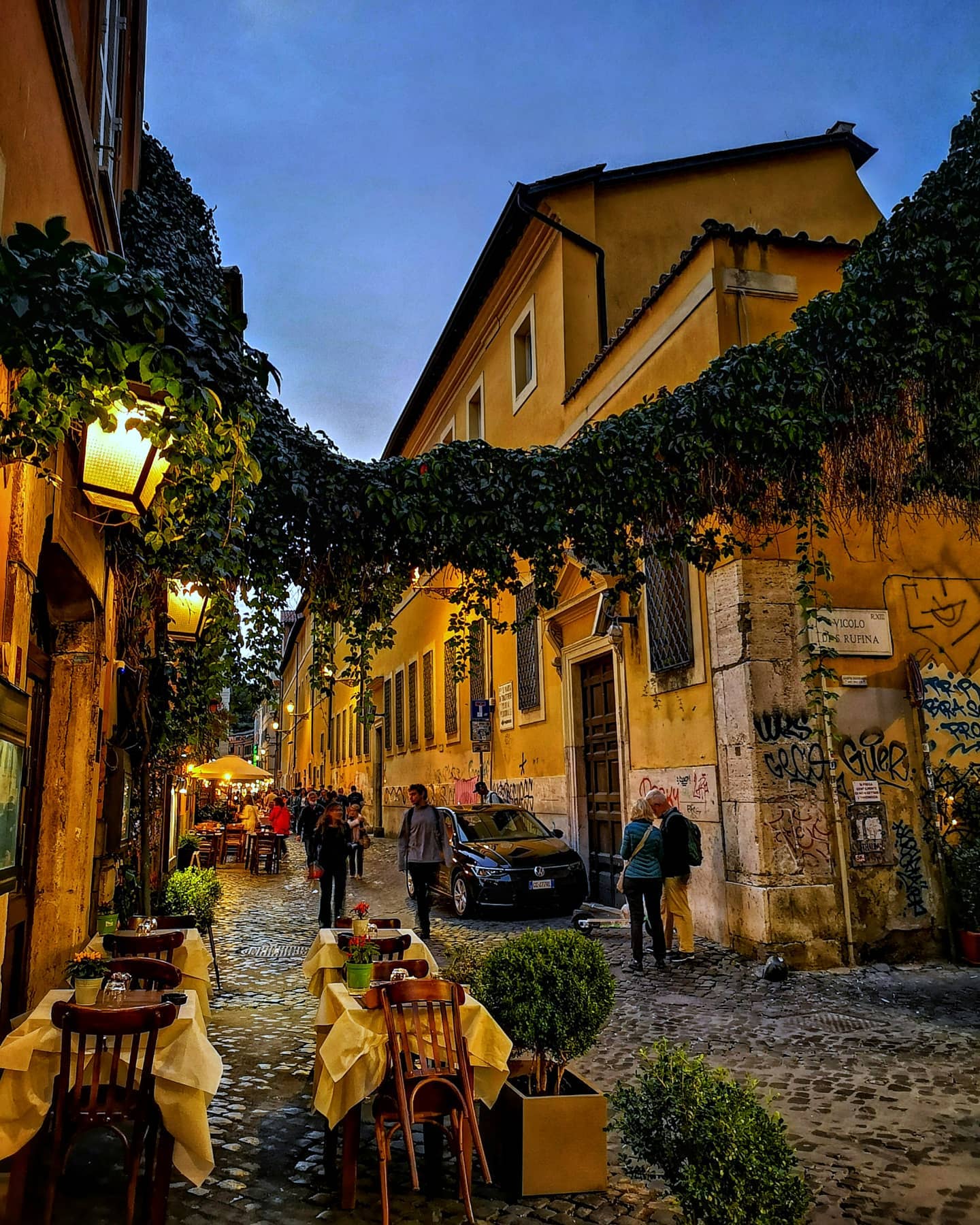 Buzzing Trastevere can lay claim to being Rome’s most vibrant neighbourhood, a picturesque jumble of cobbled alleys and stately piazzas rich in art, culture and nightlife. At the heart of the action is Via della Lungaretta, leading all the way from Piazza della Piscinula in the southeast, across main artery Viale Trastevere and onwards to Piazza di Santa Maria in Trastevere. Although the road owes its current aspect to a Renaissance refit ordered by Pope Julius II in the opening years of the 16th century, the street has much more ancient origins: in antiquity the via Aurelia Nova traced the same route, leading all the way to the Roman gate at the top of the Janiculum hill. Lined with bars and restaurants, 2,000 years later the Via della Lungaretta is still a hive of activity - when you come to Trastevere you’ll be sure to find yourself here! 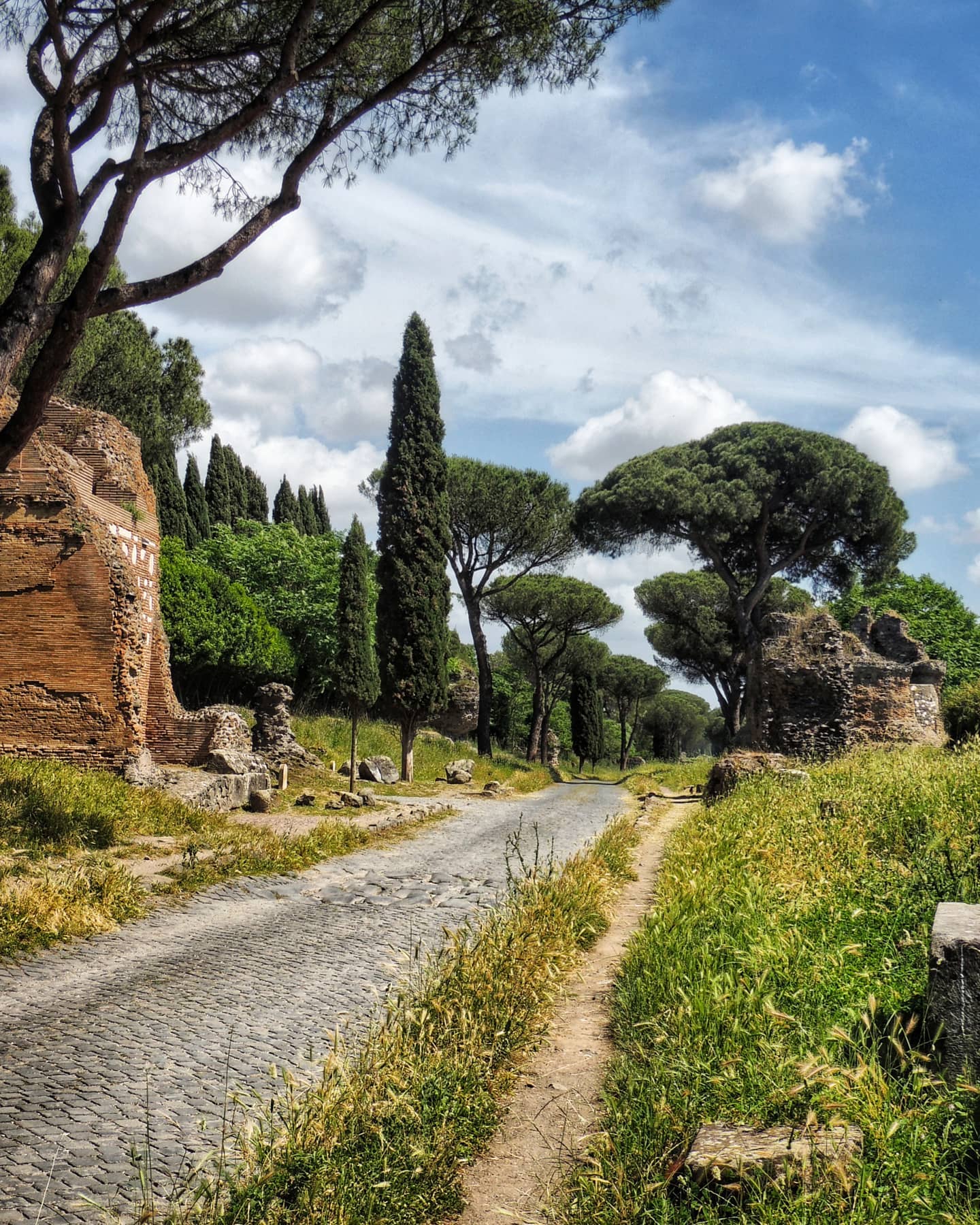 The beautiful and evocative Appian Way is the greatest ancient road of them all. The Via Appia (as it’s known in Italian) extended from Rome all the way to Brindisi in Puglia, and was constructed way back in the 4th century AD. Today a stroll along its immaculately preserved Roman flagstones is like taking a walk back in time to the heyday of ancient Rome - flanked by ruined villas, funerary monuments and swaying Roman pines, it's a place to forget the cares of the modern world and contemplate the generations of men and women who have traversed it over the millennia. Not for nothing is it known as the "Regina Viarum", or Queen of Roads! If you want to explore the full stretch of the Appian Way, then do yourself a favour and rent a bike from the shop at the beginning of the trail for the perfect day out in Rome. 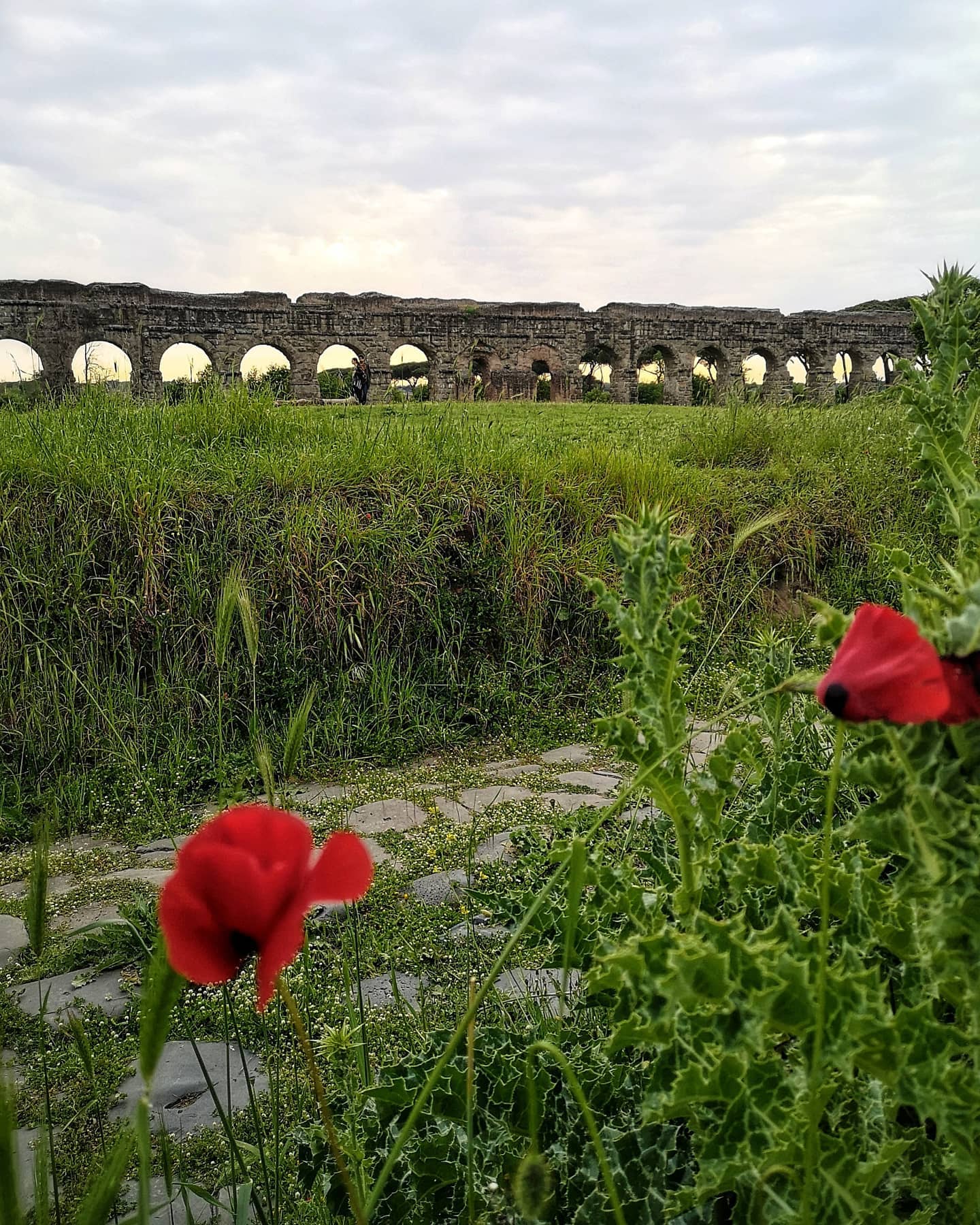 Did you know that a hidden stretch of the ancient Via Latina still winds its way through the long grasses and flowers to the south of Rome, in the shadow of the magnificent Claudian aqueduct? Though these days much less famous than the amazingly preserved Appian Way, in antiquity the Via Latina was scarcely less important, running 200km south to the Campanian city of Benevento. The road was first paved with the trademark Roman flagstones way back in the 4th century BC to facilitate the movement of the legions during the Samnite wars. Next time you find yourself in Rome's Parco degli Acquedotti make sure to keep an eye out for this fascinating little slice of ancient history! 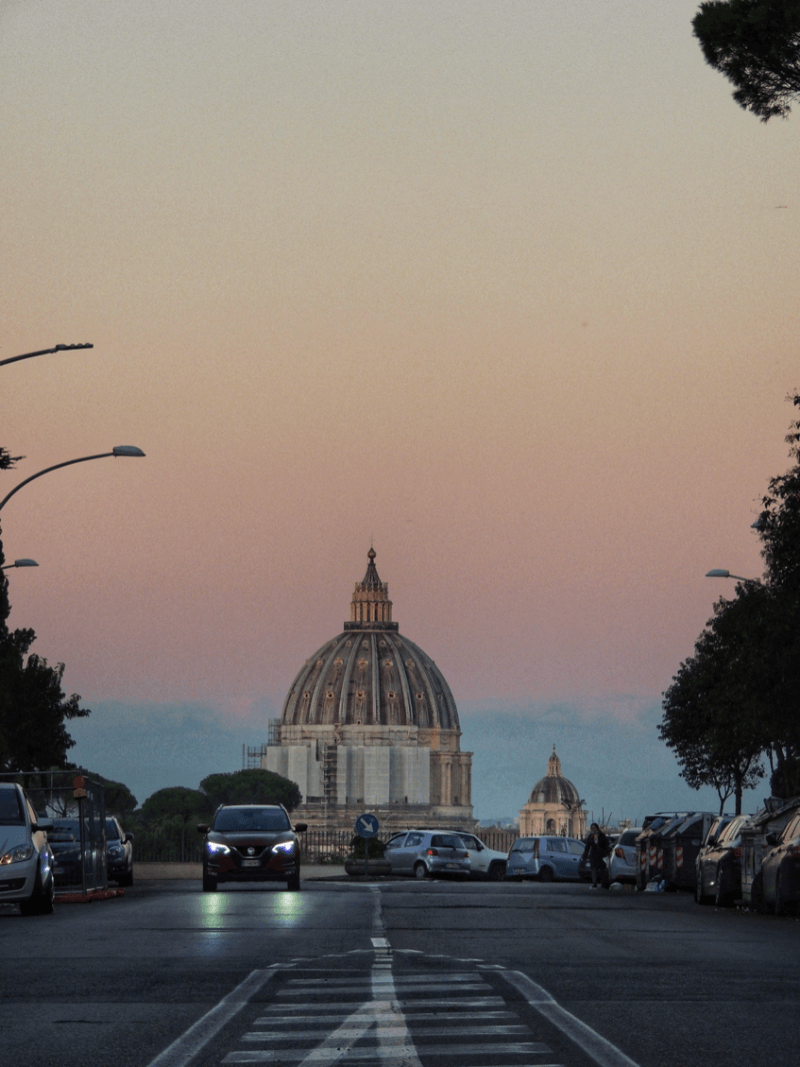 This quiet street in a residential corner of Rome to the west of the Vatican is known to locals for its extraordinary panorama of the dome of St. Peter’s basilica. Michelangelo’s architectural masterpiece appears startlingly close thanks to an optical illusion, and seems to get even closer as you head down the street away from the basilica. On the contrary, as you move towards St. Peter’s, the cupola paradoxically appears to get further away. 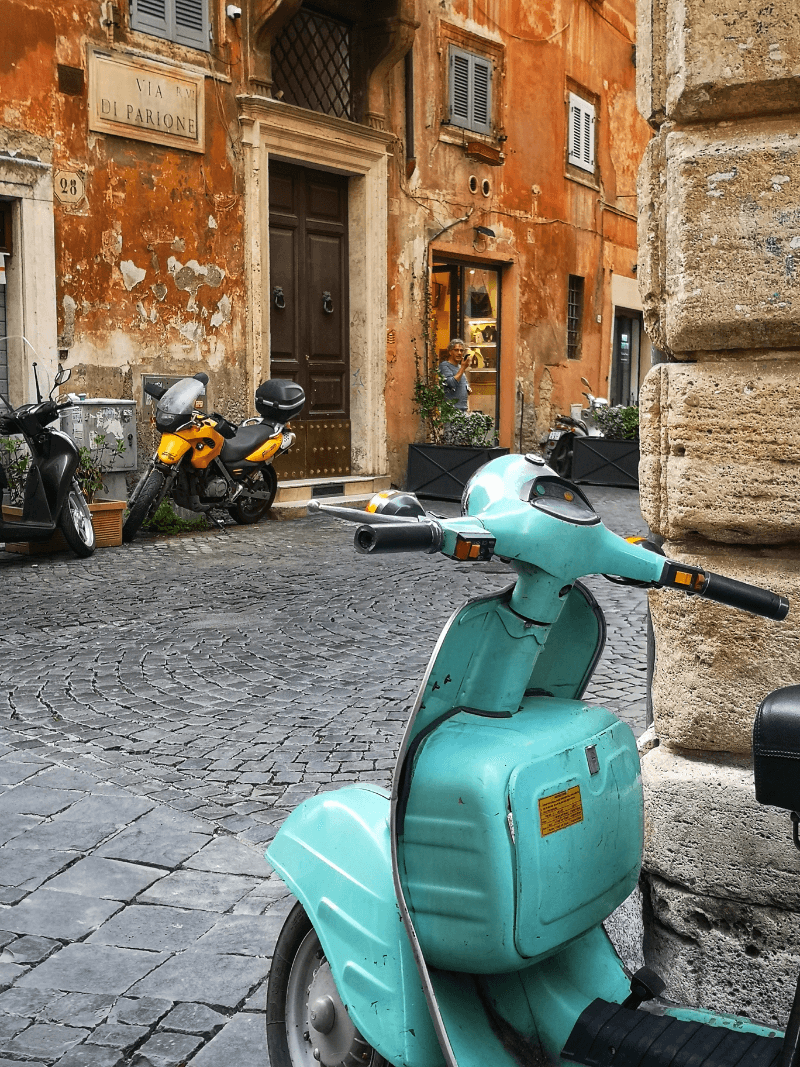 Centrally located Via del Governo Vecchio has it all. Elegant old palaces line the cobbled street as it charts a course westwards from Piazza Navona towards the river Tiber, and you’ll find some of the city’s most buzzing wine bars, vintage shops and boutiques along the route. Make sure to stop by at Il Piccolo for a pre-dinner glass of wine; if you’re feeling peckish then Da Tonino is one of central Rome’s most old-school trattorie, seemingly impervious to the march of time. Pasquino, the Eternal City’s wittiest statue, watches over the comings and goings from his plinth at the eastern end of Via del Governo Vecchio. 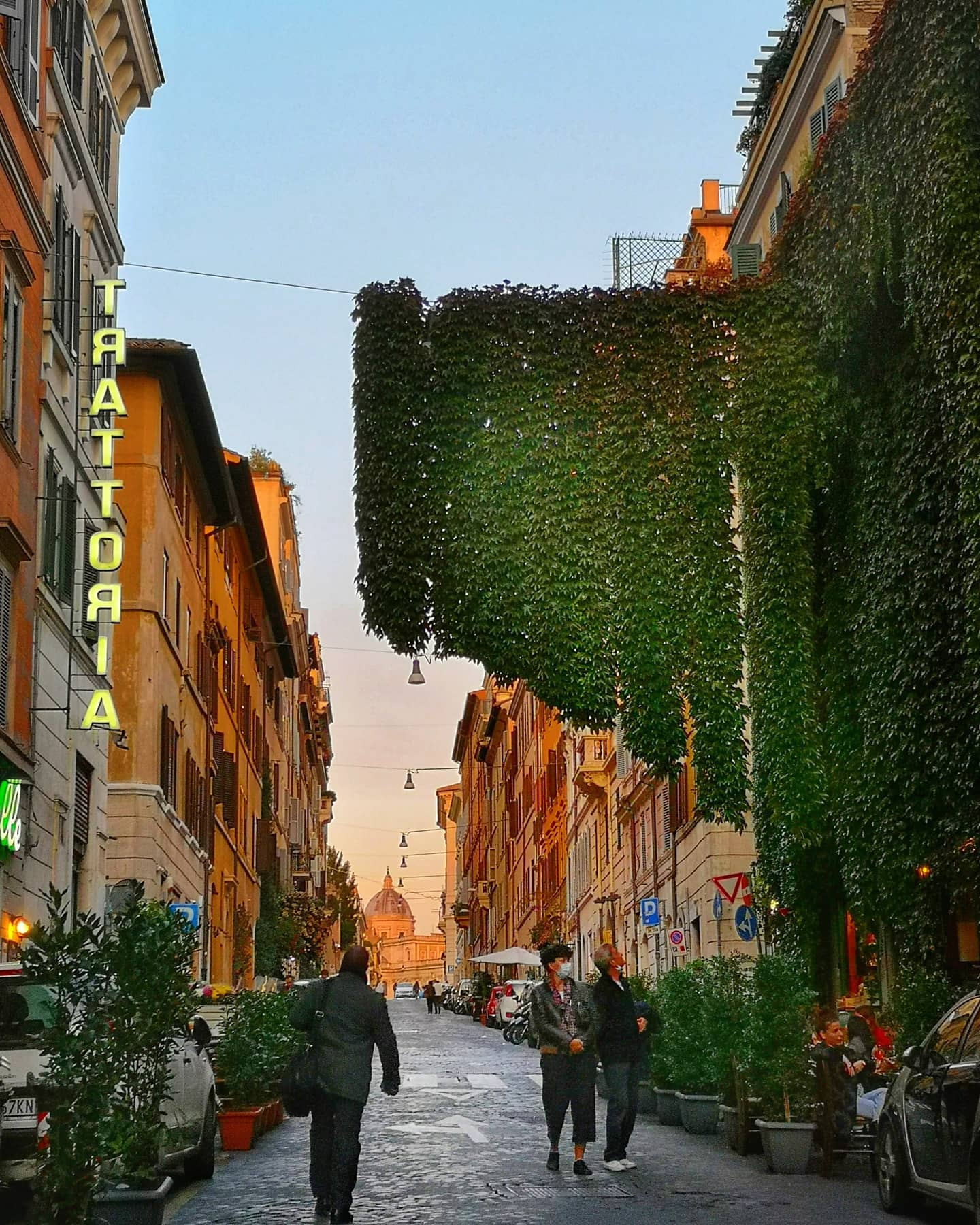 Rome is a city best savoured on foot. Only by traversing its neighbourhoods unhurriedly and without a a strict plan to follow can you get a real sense of Eternal City,  and one of our favourite places for some aimless wandering is the ultra-charming Monti quarter. Two thousand years ago this was ancient Rome's most notorious slum, known as the Suburra. These days it's quite the opposite, its picture-perfect streets and pristine piazzas a favourite haunt of Rome's beautiful people and beauty-hunting visitors from around the world.

Nowhere better captures the unique atmosphere of Monti than this spectacular corner of Via Panisperna, where creeping vines frame the street as it wends its way towards imposing Santa Maria Maggiore in the distance. Via Panisperna is more than just a pretty face: it was here that the Nobel-prize winning scientist Enrico Fermi and his colleagues at the Institute of Physics (known to history as I Ragazzi di Via Panisperna) discovered slow neutrons in 1934, ushering in the nuclear age. 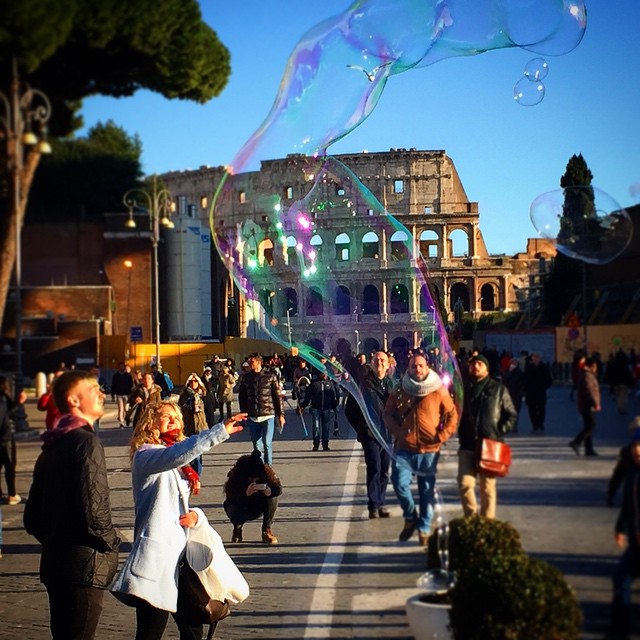 Cutting a swathe right through the heart of ancient Rome, sweeping Via dei Fori Imperiali was created in 1932 at the megalomaniacal command of Fascist dictator Benito Mussolini, who wanted a grand, modern boulevard running through the ancient city in an attempt to link the regime with the glories of the past. To underline the point, the street was initially named the Via dell’Impero, or Street of Empire. To realise the dictator’s vision, a large part of the densely populated Alessandrino neighbourhood was flattened, its medieval and Renaissance buildings demolished and residents relocated to the suburbs.

Even though the street owes its genesis to an act of urban vandalism, we must admit that a stroll along the now pedestrianised thoroughfare from Piazza Venezia to the Colosseum is an experience that is hard to beat: on one side of the road are the Imperial Fora and Trajan’s market, whilst the Roman Forum lies on the other. After a tour of the Colosseum, make sure to visit the Via dei Fori Imperiali for an evening passeggiata just as the sun begins to set for unforgettable views.