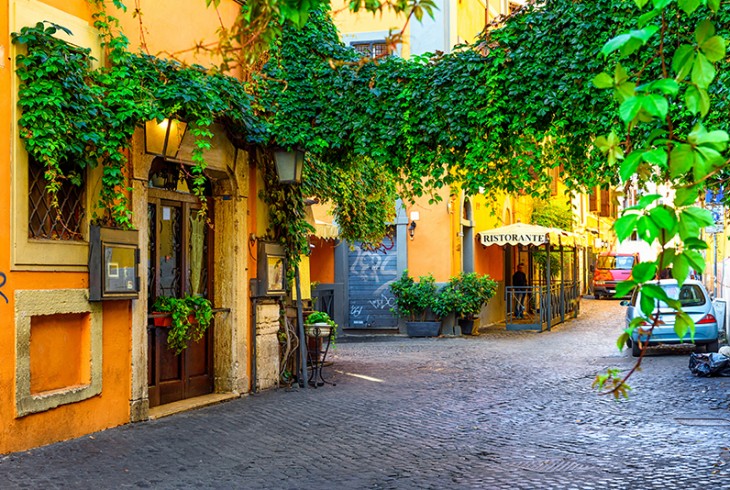 Trying to see everything Rome has to offer in a single day is rather like trying to play snooker with a stick of celery – you’re going to miss a lot. In reality, a week, a month, a year – even a lifetime – isn’t enough to peel away each and every layer of the Eternal City’s extraordinary urban tapestry. But not all of us are lucky enough to have unlimited time in Rome, and if you really do only have 24 hours to spend in the city then fear not: Rome’s historic centre is marvellously compact and dense with spectacular monuments, meaning visiting many of the major sites in a limited time-frame is very doable.

Of course, there are many ways to skin this particular cat – you could easily choose to spend your day aimlessly wandering around the Eternal City, popping into the odd church, pausing at any shop or cafe that takes your fancy, and just generally having a great time soaking up the city’s atmosphere. In today’s blog however, we’re focusing on the first-time visitor who really wants to get to grips with the totally unmissable highlights of the centre - read on for our guide to how to make the most out of your one day in Rome! 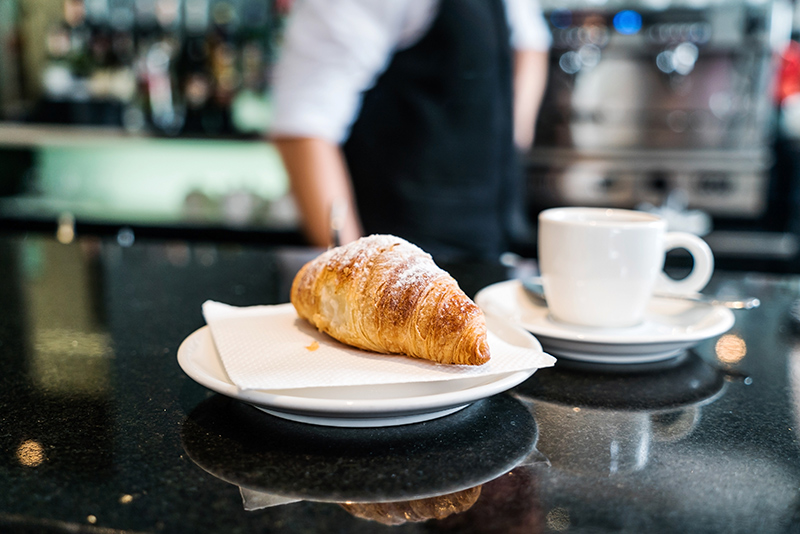 08:30 hours: Rise and shine with a Roman breakfast

Forget the egg-white omelettes and buckwheat pancakes; you’re going to need stronger stuff for the day ahead. If you’re staying in the city centre, then head to Roscioli Caffè just off Campo de’Fiori where you can get your engines running for the day ahead with a strong cappuccino and sweet cornetto. Or better yet plump for Rome’s classic pastry, the maritozzo: a massive brioche stuffed with cream and candied fruit. Thus fortified with sugar and caffeine, it’s time you head to go. 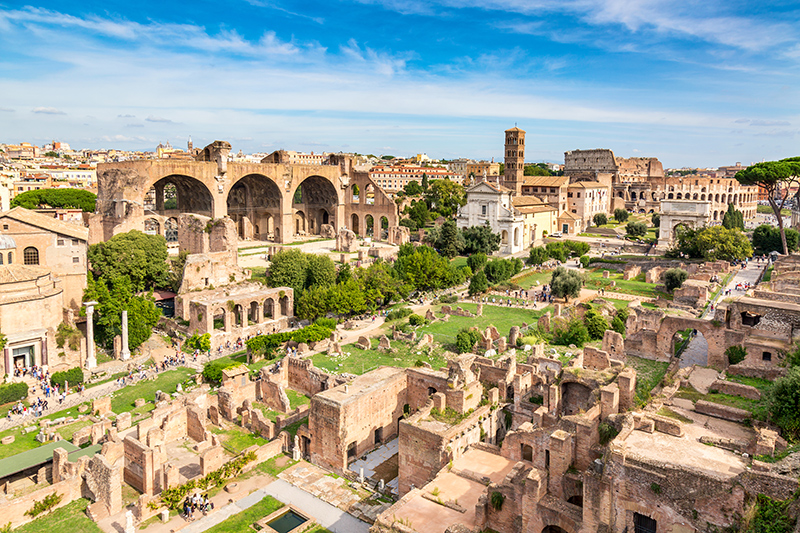 If you’re coming to Rome for the first time, then you simply can’t afford to miss the Colosseum and the Roman Forum. The first time you glimpse the former’s massive ancient arches rearing into view surrounded by the modern city is quite simply unforgettable. The largest amphitheatre ever built, this miracle of Roman engineering remains the most immediately recognisable icon of the ancient world nearly two millennia after its construction.

Make sure that you’ve been smart and booked your tickets to the Colosseum and Forum well in advance via the official website – you’ll need to decide on the time of your visit to the amphitheatre as your ticket will have a timed entrance but – and this is key – you won’t have to queue up at the site when you get there, saving you precious time.

After you’ve had your fill in the Colosseum, head across the road to the spectacular ruins of the Roman Forum - centre of political life in antiquity. Wandering through the incredible temples, courthouses and basilicas offers an amazing window into life in antiquity. Included in your ticket is the adjacent Palatine Hill above the Forum – take a quick jaunt up here to admire the imperial palaces that the ancient emperors called home, and enjoy spectacular views over the city from the Renaissance gardens Orti Farnesiani. 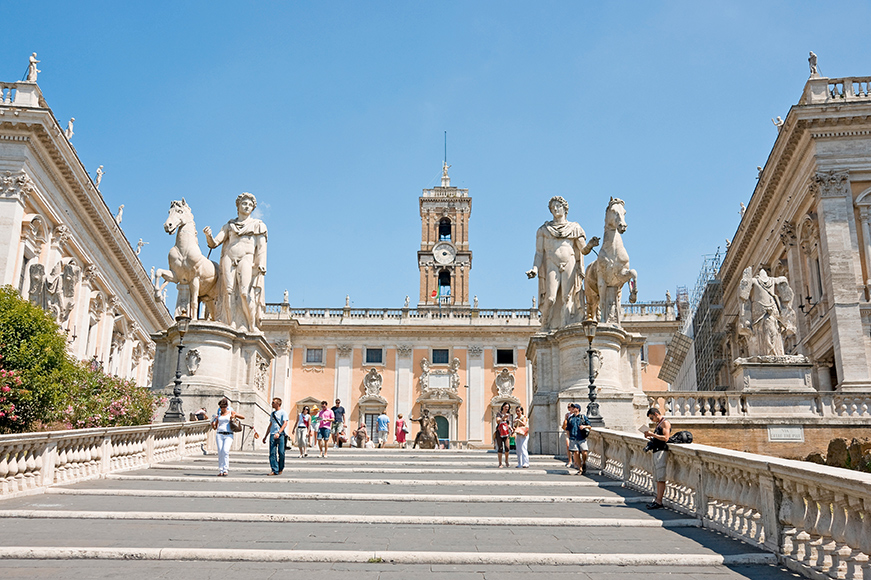 Leaving the Forum, take the short stroll around the corner and up the side of the Capitoline Hill. This has been the beating heart of civic life in Rome since antiquity, and today is home to the harmonious Michelangelo-designed Piazza del Campidoglio – perhaps the Renaissance’s most beautiful piece of urban design, including stunning views over the Forum. It’s also home to the Capitoline Museums, one of the world’s greatest museums of ancient art. You won’t have time to go in today, but store it in the back of your mind for a future visit!

At this stage your dogs might be barking, and it will be tempting to go for a leisurely site-down lunch: but if you’ve still got gas in the tank we recommend you save your real eating legs for dinner, when you’ll have more time. Instead, stroll up Via del Corso, Rome’s main shopping street that leads away from the Capitoline Hill, and stop off at the excellent (and great value) sandwich shop Pane e Salame. Grab one of their delicious gourmet panini or cutting-boards of meats and cheeses and pair it with a glass of wine. If you’re lucky you’ll be able to snag one of the tiny tables. 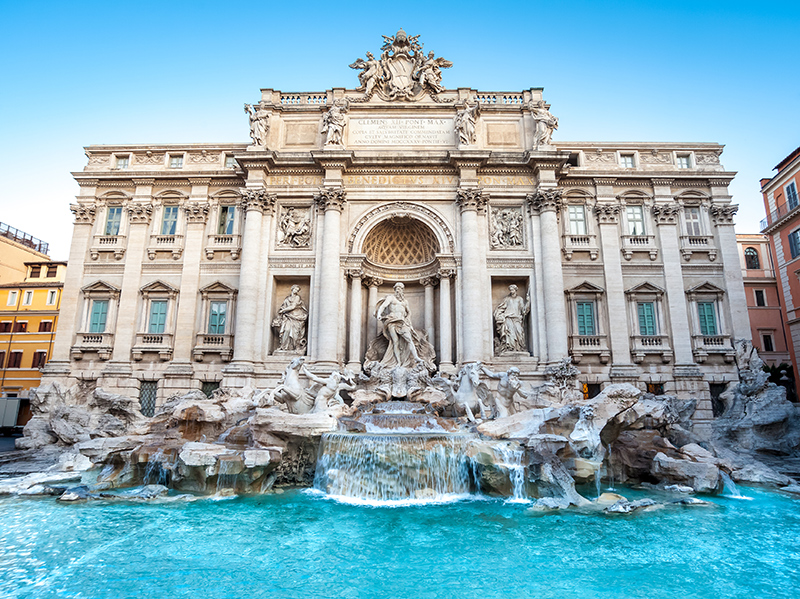 Just a few steps from Pane e Salame you’ll find the iconic Trevi Fountain – or rather, you’ll hear it, as the rushing waters make their presence known a long time before the massive monument imprisoned in a maze of narrow streets finally makes its dramatic appearance. Drink in the enchanting atmosphere of the bombastic Barque fountain designed by Nicola Salvi in the 1730s - justly regarded as one of the world’s most beautiful monuments - and toss your coin in to ensure your future return to Rome.

Continue your stroll northwards for another 10 minutes or so and you’ll find yourself in Piazza di Spagna, every bit the match for the Trevi in terms of sheer urban beauty. From the tuberculosis-stricken heartthrob of the Romantic age John Keats to Audrey Hepburn’s bored princess looking for trouble in Roman Holiday, a laundry list of the great and the good have whiled away innumerable hours in the long shadow of the spectacular sweeping staircase. After admiring Francesco de Sanctis’ cascading work of urban theatre and Pietro Bernini’s (Gianlorenzo’s dad) Barcaccia fountain beneath, climb the Spanish steps (being a staircase, that is after all what it’s for), and make your way left along the top of the hill overlooking the city, passing the Villa Medici as you go. 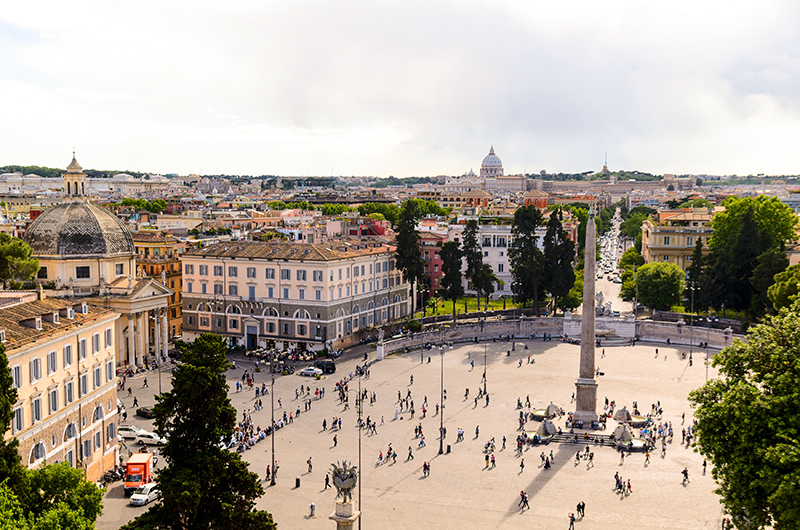 An easy 5-10 minute walk later and you’ll have reached the Terrazza del Pincio, a wide terrace that links the gardens of the Villa Borghese to the city. You won’t have time to wander into the Villa itself - instead reach for your camera and snap some shots of the incredible panorama of Rome spreading out before you, all the way to St. Peter’s dome in the distance.

From the Pincio take the flight of steps leading down into Piazza del Popolo below – traditionally the city’s most important gateway and where visitors arriving in Rome would first set foot in the Eternal City. Dominated by an Egyptian obelisk at its centre and the nearly identical twin churches of Santa Maria dei Miracoli and Santa Maria in Montesanto, the piazza is impressive enough in itself - but for a real treat pop into the basilica of Santa Maria del Popolo on the square’s northern edge. Here hang two of Baroque genius Caravaggio’s greatest masterpieces, the dramatically spot-lit Martyrdom of St. Peter and Conversion of St. Paul. 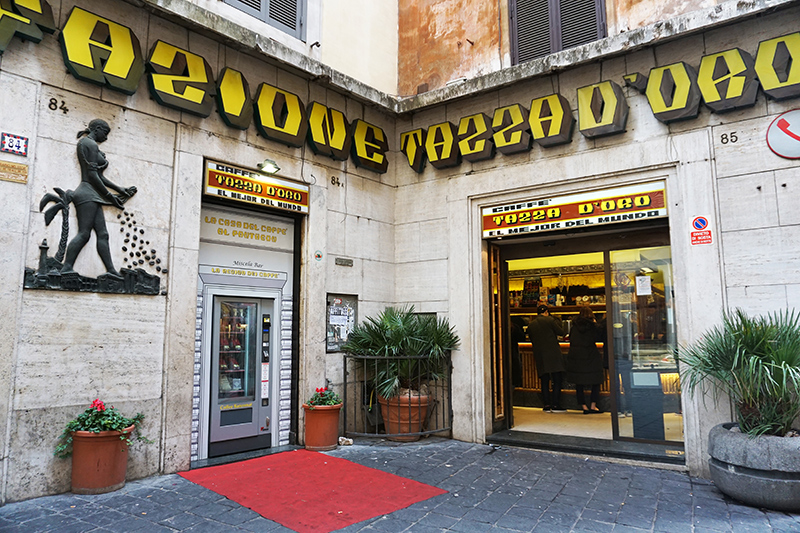 By this stage you might be legitimately flagging, so to get you back on your feet it’s time to hail a cab (or if you’re feeling up to it it’s a beautiful 20 minute walk down Via Ripetta – the rightmost street of the three roads leading south from Piazza del Popolo) and grab a coffee at one of Rome’s most iconic cafés: Antigua Tazza D’oro. Located just a stone’s throw from the Pantheon, this historic coffee shop is justly famous for its powerful espresso made from beans roasted on site – and the elegant art-deco interior is unchanged since it opened its doors back in 1946. If it’s hot out then you could do worse than to order their mean granità di caffè – layers of iced coffee and whipped cream.

Thus fortified, it’s time to stroll into spectacular Piazza della Rotonda, where the massive Pantheon awaits. Ancient Rome’s extraordinary temple to all the gods, the Pantheon is the city’s best preserved monument from antiquity – and probably the most impressive. Admire the truly enormous  columns that support its portico, somehow shipped all the way from Egypt nearly 2,000 years ago, then make your way inside.

Gaze up at the mind-boggling coffered dome completed in 126 AD – at 142 feet in diameter its still the largest unsupported concrete dome ever built anywhere in the world. Its conversion to a Christian church ensured the Pantheon’s survival after the fall of the Roman empire: according to medieval legend the oculus was created when pagan demons fled in panic through the dome when the church was consecrated to Christ. The Pantheon remains a miraculous testament to ancient engineering and is an absolute must-see. 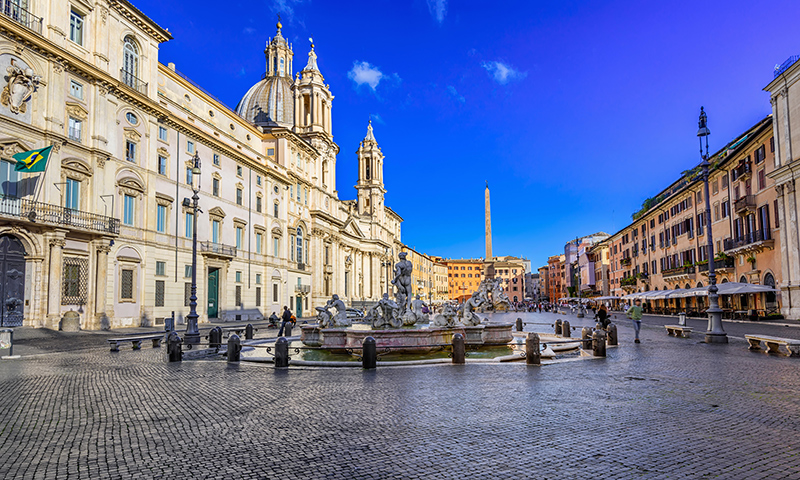 With the Roman evening fast arriving, it’s time to hot-foot it a few minutes westwards towards the city’s most charming square – Piazza Navona. If you have the time, stick your nose into the church of San Luigi dei Francesi along the way and admire another series of chiaroscuro masterpieces by Caravaggio dedicated to Saint Matthew, then continue onwards to the piazza that embodies the unique spirit of Rome more than anywhere else.

The massive horseshoe-shaped space follows the foundations of the ancient stadium of Domitian, and for centuries has been the Eternal City's extravagant centrepiece. The piazza is a vivid showcase of the Baroque age, including two fountains designed by Gianlorenzo Bernini, a dreamily undulating church erected by his arch-rival Francesco Borromini, and even a repurposed ancient Egyptian obelisk piercing the sky. This is the kind of epic grandeur that only Rome can pull off!

Next head south across the main thoroughfare Corso Vittorio Emanuele (passing speaking statue Pasquino as you do), and make your way to Campo de’ Fiori, site of one of Rome’s oldest markets. The beautiful square conceals a dark past, however: historically one of the city’s main execution sites, it was here that the pyres of the Roman Inquisition burned brightest in the 16th-century. Looming over the fruit markets and bustling bars is a Gothic reminder of the piercing screams and stench of burning flesh that once wafted across these cobbles – the enormous brooding and hooded figure of Giordano Bruno, burned for heresy here in 1600. Pull up a chair looking out onto the picturesque piazza at the bar Il Nolano (Bruno’s nickname), and raise a glass to the doomed philosopher. 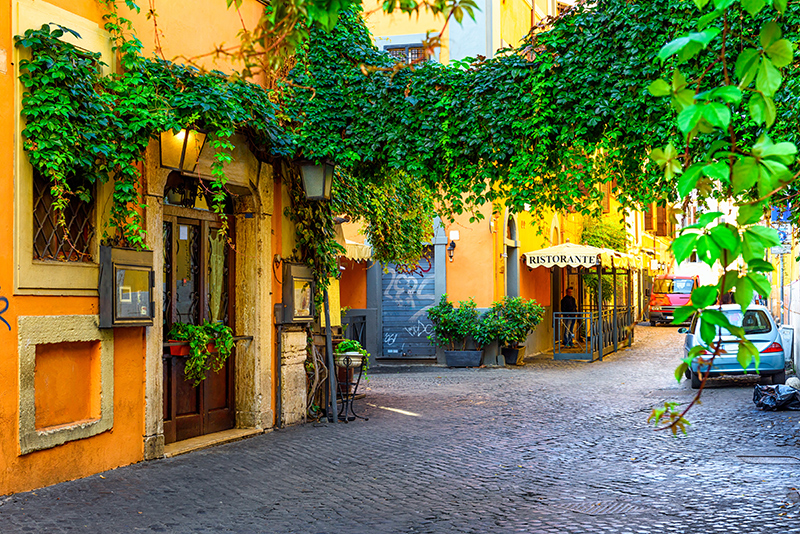 18:00 Stroll over the Tiber for an evening in Trastevere

From Campo de’ Fiori wander into adjacent Piazza Farnese and admire the imposing architecture of Palazzo Farnese completed by Michelangelo, then continue south to the beautiful Renaissance bridge Ponte Sisto, from where you’ll catch a glimpse of St. Peter’s at twilight off in the distance. For your final act of sightseeing, cross the bridge into Trastevere, one of Rome’s most characterful quarters. Perfect for a relaxing evening after a long day, Trastevere is chock-full of great bars and restaurants like Le Mani in Pasta, Da Enzo, Da Carlone, Tonnarello and many more. But before you put your feet up take a quick look in stunning Santa Maria in Trastevere, the area’s ancient church that boasts some of the city’s most impressive (and oldest ) mosaics. Now all that’s left is to enjoy the Roman evening!

What about the Vatican?

We haven’t mentioned the Vatican City or the Sistine Chapel on our one day in Rome itinerary – that’s because if you’re doing things off your own bat, it’s simply too stressful and tiring to add them to the list. If you’re intent on seeing the Vatican Museums in addition to the historic centre and ancient city in a single day, then be advised that it can be done  - but you’ll need some help.  The way to go is a guided tour with transportation getting you between the sites in double-quick time – if this is what you’re looking for then check out Through Eternity’s Rome in a Day Group Tour or Rome in a Day Private Tour, and don’t miss out on a thing on your 24 hours in Rome!