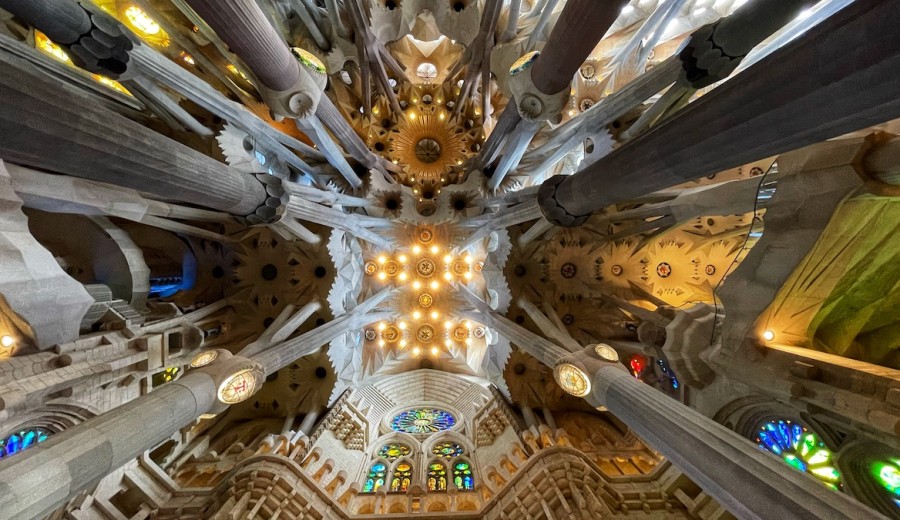 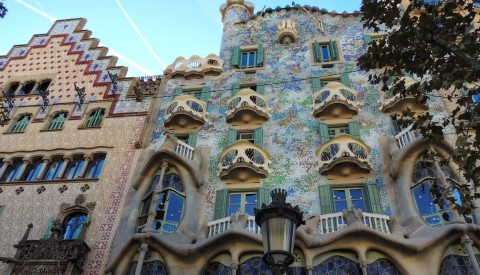 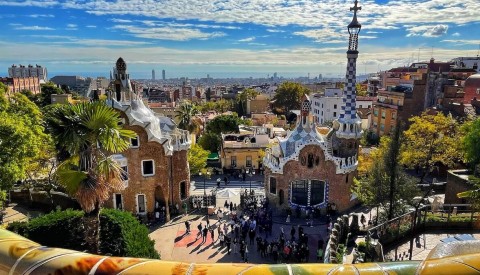 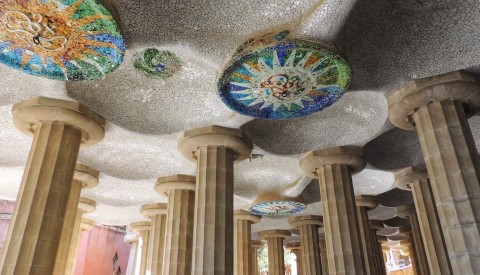 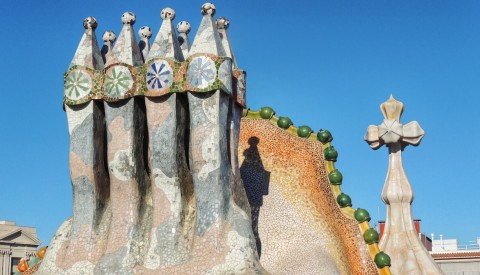 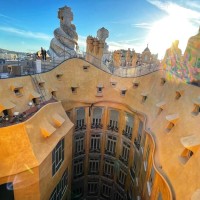 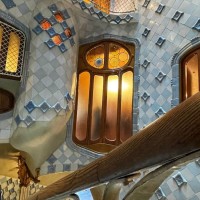 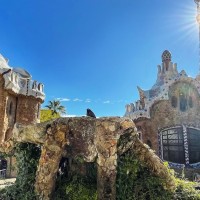 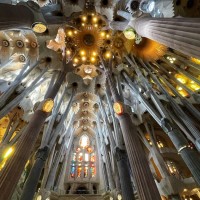 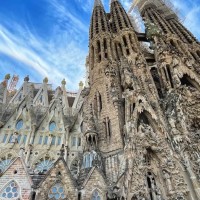 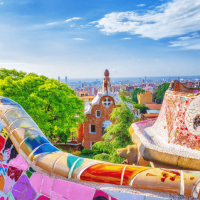 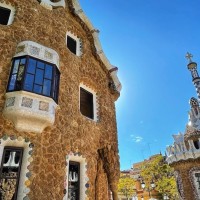 In Barcelona, one figure reigns supreme: the stunning city that we know today was shaped by Antoni Gaudí more than anyone else, and our Best of Gaudí tour is the perfect way to discover the magnificent legacy of the great Catalan architect. In the company of an expert local guide we’ll be visiting Gaudí’s magnum opus, the jaw-dropping Sagrada Familia. Discover how Gaudí’s interest in nature and complex symbolism combined to forge a unique architectural style that has become synonymous with Barcelona, and how the enormous modernist basilica is still under construction more than 100 years after it began. In playful Park Güell we’ll get up-close-and-personal with Gaudí’s trademark organic forms and mind-bending geometries, whilst down on the famous Passeig de Gracia we’ll get to admire two dream-like masterpieces that have become UNESCO World Heritage Sites: Casa Mila and Casa Batlló. No story of Barcelona can be told without Gaudí: discover it with us!

The fabulous architectural creations of Antoni Gaudí have become synonymous with Barcelona, and nothing captures the unique spirit of the Catalan capital quite like the fantastical buildings he designed across the city over the course of five decades. No visit to Barcelona is complete without an in-depth exploration of his unique genius, and on our Best of Gaudí tour we’ll be visiting the architect’s absolute masterpieces in the company of a Barcelona native: the Sagrada Famila, Park Güell, Casa Mila and Casa Batlló.

Gaudí’s extraordinary urban vision transformed the face of Barcelona, ushering in a style of architecture all his own. On our tour you’ll learn why Gaudí’s highly individual approach to the relationship between the natural and manmade worlds proved to be so revolutionary, and how his visionary ideas still resonate powerfully with visitors to the city almost a century after his death. No fewer than seven of Gaudí’s buildings in Barcelona have been declared UNESCO World Heritage sites, and on our Best of Gaudí itinerary you’ll see why!

The first stop on our tour of Gaudí’s architecture in Barcelona is the work that would become Gaudí’s crowning achievement and ensure his legacy: the dazzling, awe-inspiring Sagrada Familia. The enormous basilica’s otherworldly confection of gingerbread spires soar majestically over 300 feet into the Barcelona sky, seemingly plucked from the pages of a fantastical fairytale.

Gaudí first began construction on the Sagrada Familia in 1883, and incredibly the project has still yet to be finished. Gaudí himself toiled away here for 43 years, and the Sagrada Familia would become an ever-more dominating obsession for the great architect in the final years of his life (Gaudí even insisted on being buried in the basilica’s crypt). And the work continues today. Like the great cathedrals of medieval Europe that inspired it, the church has become a multi-generational undertaking integral to the life of the city.

On our tour of the Sagrada Familia you’ll discover the fascinating history of Gaudí’s masterpiece. Learn how  Gaudí’s visionary’s design pushed architecture in new, unexpected directions, making the Sagrada Familia unique in the world even today. As perhaps the pre-eminent example of Catalan Modernism, the church’s virtuoso fusion of organic forms, nature symbolism, mind-bendingly complex geometries and cutting-edge technological innovation has to be seen to be believed.

The Sagrada Familia is Barcelona’s most famous monument, and visitors flock from around the world to see it - over 4 million each year at last count. Queues here tend to be long, and that’s why on our Sagrada Familia tour we make sure you’ll have priority skip-the-lines access, meaning we’ll be able to spend more time in the cathedral.

Before going inside, we’ll admire the so-called Nativity Facade - the only part of the basilica to have been fully completed by Gaudí himself. The thickly-encrusted stone surface seems to ripple with life, with an array of sculptures of trees and flowers, animals and humans all vying for our attention. Religious statues of Jesus, Mary and Joseph remind us that this is a temple dedicated to the Holy Family, and your guide will help you to unravel the extremely complex and highly symbolic imagery of Gaudí’s spiritual philosophy, centred around the idea that nature itself is God’s great masterwork.

Entering the basilica, we’ll be immediately struck by the sheer scale of the church’s five naves, its distant roof held up by tree-like columns that give the visitor the impression of wandering through an enchanted forest. The extraordinary chromatic effect created by light streaming in through the church’s stained glass windows meanwhile is a Gaudí calling-card.

Across town, the playful side of Gaudí’s approach to architecture is showcased at its most characteristic in the Park Güell. This 30-acre park sits atop a hill offering spectacular views across the city, and began life as an ambitious new type of residential complex in 1900, taking inspiration from the English garden city movement. The plan never quite worked out, and the complex soon became something of an ideas-factory or playground where Gaudí could express his most fanciful architectural ideas. These days the Park Güell is one of the city’s best-loved public spaces, and a must-visit on a Barcelona tour.

With pre-booked entrance tickets meaning we won’t have to wait in line, on our tour of Park Güell we’ll stroll along the winding paths of this serpentine garden, encountering dream-like buildings, colourful mosaics and perspective-denying walkways at every step. On the billowing Dragon Stairway we’ll come face-to-face with Gaudí’s famous mosaic-covered sculpture of the fire-breathing reptile, a symbol of the city. As at the Sagrada Familia, Gaudí’s trademark organic forms are everywhere - stone columns that look like trees, softly curving walls and colourful tile-encrusted benches.

Take a stroll along the Passeig de Gracia, admiring the Casa Mila and Casa Batlló

The Passeig de Gracia is one of Barcelona’s most important avenues, the beating heart of the modernist Eixample neighbourhood, and home to some of the most important examples of Catalan modernism anywhere in the city. On our Best of Gaudí tour, we’ll get to see two of the architect’s absolute masterpieces on this sweeping boulevard. The facade of dream-like Casa Batlló seems to be alive: with its anthropomorphic balconies and undulating, scaly roof, the house resembles a creature from another world. And indeed, Gaudí’s design was intended to invoke the story of St. George and the Dragon, a tale of particular importance to Barcelona.

No less extraordinary is the Casa Milà down the street. Named after the local bigwig who commissioned the building from Gaudí as a fashionable office-block and apartment in 1905, the structure is widely known as La Pedrera  (Catalan for the Quarry) and it’s easy to see why. Standing on the corner of one of Barcelona’s busiest intersections, the imposing hulk seems to be blasted from a massive rock-face, its pockmarked facade eroded by the elements. The building’s extraordinary roof, studded with chimneys that evoke a corps of medieval crusader knights, is as wildly inventive as anything in Gaudí’s canon. On our tour you’ll get the full story behind La Pedrera, and discover why it’s one of the great masterpieces of Barcelona architecture.

Why take a Barcelona tour with Through Eternity?

Our private Bareclona itineraries have been carefully crafted to make sure you get the most out of your time in the vibrant Catalan capital. We only work with expert local guides who have a profound knowledge of the city and love to share their home with visitors. In addition to in-depth explorations of the best of what Barcelona has to offer, we take you beyond the highlights to help you discover a side of the city that is usually the preserve of locals. Get in touch with Through Eternity today and let us craft the perfect Barcelona holiday for you!

A MUST do. Our guides were informed, hilarious, and the experience of seeing Barcelona at night this was was simply amazing. Our teenagers loves the experience!!!!