Story of a Carbonara: The Inside-Track on Roman Cuisine's Greatest Dish

As much as it is one the world’s pre-eminent cities of art and culture, Rome is also a city of food. From cheeses like the uniquely salty and sharp pecorino Romano to artichokes deep-fried or braised in oil and herbs, from street-food staples like pizza and supplì to rustic classics like tripe and rabbit stew, it is a rare visitor who leaves the Eternal city with a dissatisfied belly.

After a long day picking your way through the magnificent ruins of the ancient city or poring over artistic masterpieces in the Vatican Museums, you better believe you’re going to be hungry - so it’s a good bet you’ll want to embrace this side of the city with gusto. There’s one quintessentially Roman dish standing head-and-shoulders above the rest that you simply have to try, a magnificent first-amongst-equals on the city’s culinary landscape: pasta alla Carbonara. This is a dish that inspires devotion verging on spiritual zeal – some Romans even maintain that the Eternal City’s greatest contribution to world culture doesn’t lie in Michelangelo’s ceiling in the Sistine Chapel, but instead within these bright golden threads of pasta.

How do I make it?

Like all the best things in life, the recipe for Carbonara couldn’t be simpler. Fry up some bacon – to do it right it has to be fatty guanciale, or cured pork-cheek. Beat together freshly separated egg-yolks and copious quantities of pecorino Romano along with generous twistings of cracked black pepper; combine everything with steaming spaghetti or mezze maniche drained and taken off the heat (the debate about whether Carbonara should be made with a long or a short kind of pasta is one that runs and runs). Do it right, and everything emulsifies into a uniquely rich and creamy concoction to die for. But its simplicity is an illusion, and making a proper carbonara isn’t as easy as it looks. Mess things up by combining the ingredients when they’re too hot and you’ll get dry pasta with scrambled eggs on top, which is a hot mess about as appetising as it sounds!

Be careful: carbonara is a serious business

If you do get the recipe or method wrong, beware: hell hath no fury like a Roman who finds out you’ve desecrated their iconic dish. You certainly don’t want to end up in the midst of a social-media firestorm like the well-intentioned but sadly misguided editors of the French website Démotivateur: their 2016 proposal of a one-pot Carbonara involving boiling onions, bacon and pasta together before topping with a dollop of crème fraîche, cheese, parsley and a single egg-yolk caused mass hysteria and a stream of vitriolic comments from Rome. One outraged Roman even called for the immediate excommunication of the sacrilegious journalists. You have been warned.

What's in a name?

Even though Carbonara is now established as Rome’s most iconic dish, a rite-of-passage and source of ceaseless arguments for Romans and tourists alike, no-one really knows where it comes from. It sprang seemingly fully-formed onto the city’s culinary scene as if a gift from the gods sometime in the 1940s. The word carbonara recalls the carbonari, charcoal producers who spent their time roving the forests of northern Lazio procuring and burning the timber required to make the fuel. One theory goes that carbonara’s unusual combination of readily-available and non-perishable ingredients were ideally suited to being squirreled away in the charcoal makers’ knapsacks, easily combined on an open campfire.

An army marches on its stomach: do we owe Carbonara to the U.S. Army?

Another more entertaining, and equally plausible, origin story holds that the Carbonara has its direct origins in the war years, and, gasp, owes its incarnation to American G.I.s stationed in Rome after the city’s liberation in 1944. The tale goes that the hungry and homesick soldiers were sick and tired of the poor quality grub they got in the army canteen, and so tasked the industrious local chefs to make them a dish that reminded them of home. In one of the greatest acts of fusion-cooking ever attempted, the Italian cooks set about transforming the rudiments of an American breakfast into an Italian dinner - frying up bacon, whipping in cheese and egg-yolks and tossing with freshly cooked spaghetti, in a stroke they gave birth to a giant of global cuisine. A variant of the tale gives the Americans even more credit. According to this version a soldier was dissatisfied with a rather sad plate of spaghetti he received in a restaurant in 1944, and to make it richer added the contents of his rations pack to the dish – powdered eggs, bacon and cheese. The result was a hit amongst the G.I.s, and entrepreneurial restaurateurs rushed to codify the dish.

Which of these is the real story, nobody knows. What is certain is that if you come to Rome and leave without tasting a carbonara, you’ve committed one of the original sins of travel. So leave the ersatz imitators you may have grown up with behind. Drop those peas, put down that ham, dump the onions and for God’s sake leave the cream where it belongs in your fridge door. Carbonara as nature and the Romans intended it is perfect as it is. The transformation that occurs when the humble ingredients of a carbonara come together is nothing short of a culinary miracle, alchemy for the modern age. But don’t take our word for it. Try it for yourself!

7 Places to try a classic carbonara in Rome

Virtually every restaurant in the city serves up a carbonara, and fortunately for us nearly all of them know what they’re doing. Everybody has their favourite go-to place when the craving hits, but here’s a personal short-list of traditional trattorie to get you started.

Borghiciana Pastificio Artigianale, Borgo Pio, 186. - It can be a challenge finding high-quality and reasonably priced food in the area around the Vatican Museums, but this tiny place is a wonderful exception. All pasta is hand-made on site, and at €8 their magnificent carbonara is hard to beat. Only open for lunch during the week. Be prepared to queue, but the line moves quickly and you’ll be glad you waited.

Da Carlone, Via della Luce 5 – The interior of this Trastevere institution might be a bit of a fussy throwback to your grandmother’s living room, but appearances can be deceiving. Their massive carbonara is absolutely delicious, and will keep you going for about a week. Maybe best to save this one for a day when you’ve already burned a thousand calories toiling away in the Roman Forum...

Lo Scopettaro, Lungotevere Testaccio, 7 - Beautifully situated on the banks of the Tiber in the famous food haven of Testaccio, Lo Scopettaro serves up some of the best and most traditional Roman cuisine in the city. Tripe, meatballs and pasta alla amatriciana are all excellent, but the carbonara takes things to another level.

Da Danilo, Via Petrarca, 13 - Located in the Esquilino neighbourhood not far from Termini station, Danilo is considered by many Romans to serve up the finest carbonara in the city. So much so that this place is always booked up a few days in advance - be sure to book ahead.

Giulio Passami l’Olio, Via di Monte Giordano, 28 - One of Rome’s most beautiful restaurants on one of the historic centre’s most beautiful cobbled streets. Proudly idiosyncratic and with perhaps the largest wine-list in the city, their elegant carbonara is always a treat for the senses. Sadly the restaurant suffered a fire last December and is currently closed, but they assure us they'll be up and running again soon.

A Piedi Pari, Via dei Volsci, 107 – Traditional San Lorenzo is another haven for foodies in the city, bursting with affordable restaurants serving high-quality Roman fare. You can’t go wrong around here, but the carbonara at A Piedi Pari is a real highlight, as is the picturesque location with tables spilling out onto peaceful Via dei Volsci.

Da Simo, Via Di Parione, 34 – Popular with locals and travellers alike for its location - tucked away off central Via del Governo Vecchio - and its affordable prices, Da Simo serves up authentic and no-frills versions of all the classics. Its carbonara is pitch-perfect, and deliciously easy on the wallet too.

If you want to learn more about Rome’s rich food traditions first-hand, check out our fascinating Rome Food tours! 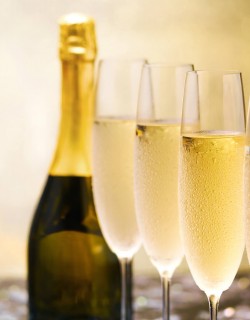 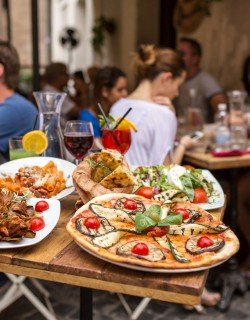 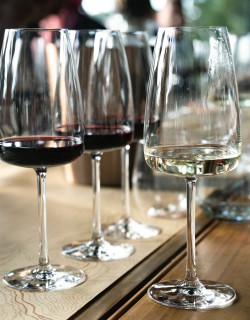 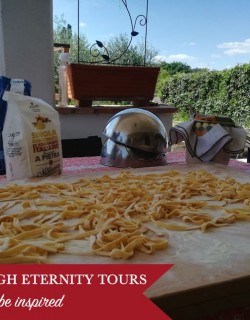