In the middle of December the streets of Rome’s centro storico are swarming with Christmas shoppers. Via del Corso is bright with Christmas lights, while Piazza Venezia and the Colosseum try to out-do each other with their gigantic Christmas trees. After your Colosseum group tour, have a look at the Christmas tree when it’s all lit up. It’s particularly impressive at night, and at certain angles it seems almost as tall as the Colosseum itself.

But before tinsel and fairy lights, and before Christ, there was Saturnalia. This ancient Roman festival was celebrated from the 17th to the 23rd of December, beginning with a sacrifice in front of the Temple of Saturn in the Forum. Like all pagan temples in Ancient Rome, the interior of the temple was inaccessible to the general public, so ordinary Romans would not have been able to see the remarkable hollow statue of Saturn, which was filled with olive oil. Unlike Christian churches, which are open to everyone, the secrets of the Roman temples remained behind closed doors.

In December, however, the Temple of Saturn became a symbol of revelry and role reversal. Romans who gathered on the temple steps may not have been permitted to enter, but they could witness the sacrifice that heralded the beginning of an extraordinary period of festivities. Saturn was a god of agriculture who was believed to have ruled over the Golden Age, a simpler and more peaceful time, and Saturnalia was celebrated in this spirit.

After the sacrifice, public rituals included a lectisternium, where an image of Saturn would have been placed on a couch and offered food, and a public banquet. At home Romans bathed early and sacrificed a suckling pig in honour of the god. Some aspects of the holiday, like the closure of schools, resemble modern holidays, while others were more unconventional. Social norms and hierarchies were temporarily turned upside down; most famously, slaves feasted like their masters and were allowed to dine first. Slaves could speak freely, wear the hat that was usually only worn by free citizens, and even disrespect their masters without fear of punishment. It was a time of excessive gambling – not usually allowed – and even more excessive drinking.

Unsurprisingly, Saturnalia was one of the most popular Roman holidays. Citizens and slaves alike revelled in the opportunity to run wild, speaking, dressing, drinking and gambling without restraint. People may have worn masks, like in the modern day carnevale, while the tradition of exchanging gifts is one of the many parallels between Saturnalia and Christmas.

Yet not everyone embraced the hedonistic spirit of Saturnalia. Pliny the Younger retreated to some quiet rooms in his villa outside of Rome when the chaos of the festivities became too much: “This way I don’t hamper the games of my people and they don’t hinder my work or studies.” In a letter Seneca observed disapprovingly that “the whole mob has let itself go in pleasures”. These hedonistic pleasures were viewed as a convenient distraction for those with dark intentions. The Catiline conspiracy, which involved plans to commit arson and murder senators in an attempt to overthrow the Roman Republic, was deliberately scheduled for Saturnalia. Catiline, the senator who led the conspiracy, must have hoped that the majority of Romans would be too drunk and distracted to notice that he was up to no good. Unfortunately for Catiline, Cicero remained alert even during the dissipation of Saturnalia. The plot was exposed, and Catiline was forced to flee Rome.

These days the festive period is supposed to be an opportunity to spend time with your loved ones, but Roman emperors tended to be less sentimental about their families. In AD 211 Caracalla plotted the assassination of his younger brother Geta during Saturnalia, arranging a “peace meeting” which ended with Geta dying in his mother’s arms.

Yet for ordinary Romans who were not embroiled in politics and power play, Saturnalia was a cheerful and peaceful period of relative tolerance. Even the most outspoken slaves or debauched parties were not really considered a threat to society, as everyone in Rome knew that the fun would come to an end within a week, and everything would go back to normal.

The connection between Saturnalia and Christmas has always been a subject of dispute. There are some striking similarities; both festivals occurred at the same time of year and involved feasting and gift-giving. However, the differences are even more striking than the similarities. There has never been any Christmas equivalent of the Saturnalia tradition where dead gladiators were given as offerings to Saturn. In addition, it is now generally agreed that the festival of dies natalis solis invicti (“birthday of the unconquered sun”), celebrated on 25th December, was more closely connected with Christmas.

Christmas as we know it – the celebration of the birth of Christ on 25th December – began in Rome more than 1,500 years ago. Saturnalia, the cult of sol invictus, and other pagan beliefs and traditions were gradually forgotten over time and replaced by Christian celebrations. But as you walk through Rome, past churches and lavishly decorated shop windows, take a moment to reflect on another kind of festive spirit that existed in this city centuries ago. Join a Roman Forum tour of Through Eternity to see the Temple of Saturn for yourself, and to learn more about the rituals and celebrations of Ancient Rome. 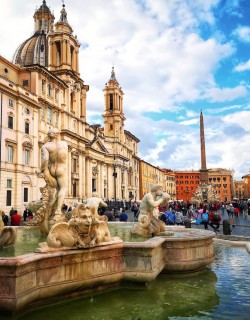