The Florence of the Medici: Power, Intrigue and Art in the Renaissance City 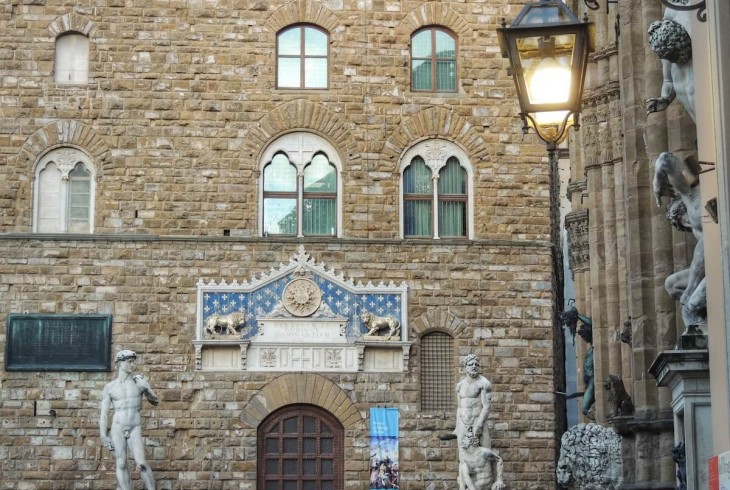 On the 26th April 1478, the peaceful air of a Spring morning in Florence was violently rent asunder by the culmination of an audacious plot hatched against the powerful Medici family by their arch-rivals. The Medici had made no shortage of enemies in high places during their inexorable rise to power in the 15th century, and it was members of three other powerful clans that spearheaded the brutal attack against Lorenzo the Magnificent in the Florentine Cathedral of Santa Maria del Fiore - Girolamo Riario, Francesco Salviati and Francesco de' Pazzi.

The assassins struck just as the priest was intoning Mass from the Duomo’s high altar, and the murder plot involved even the pope himself, desperate to safeguard Papal power against the dangerously influential Medici. Lorenzo’s brother Giuliano succumbed to his wounds, fatally stabbed by the merchant Bernardo Bandini Baroncelli, but Il Magnfico survived, and the so-called Pazzi conspiracy was doomed to failure. 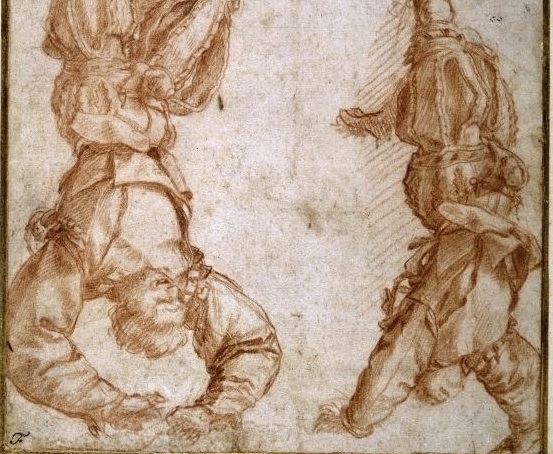 The brutally swift reprisals and summary executions that followed the failed conspiracy firmly established the Medici at the pinnacle of Florentine society. Sandro Botticelli was commissioned to paint images of the conspirators hanging upside down from the facade of the Palazzo Vecchio, a vivid visualisation of Medici hegemony over the city.

Today, over 500 years later, the spectacular first city of the Renaissance still bears the indelible stamp of the Medici everywhere, and this week on our blog we’re taking a virtual stroll through the streets of Florence as it was when the family ruled the roost - a rich tapestry of fabulously wealthy merchants and ambitious princes where revolutionary advances in science, art and technology would combine to make Florence one of the great wonders of the Early-Modern world. Next time you come to Italy make sure to follow in the footsteps of the Medici by following our self-guided Florence itinerary, or better yet book a tour of Florence with us to see the city through the eyes of an expert! 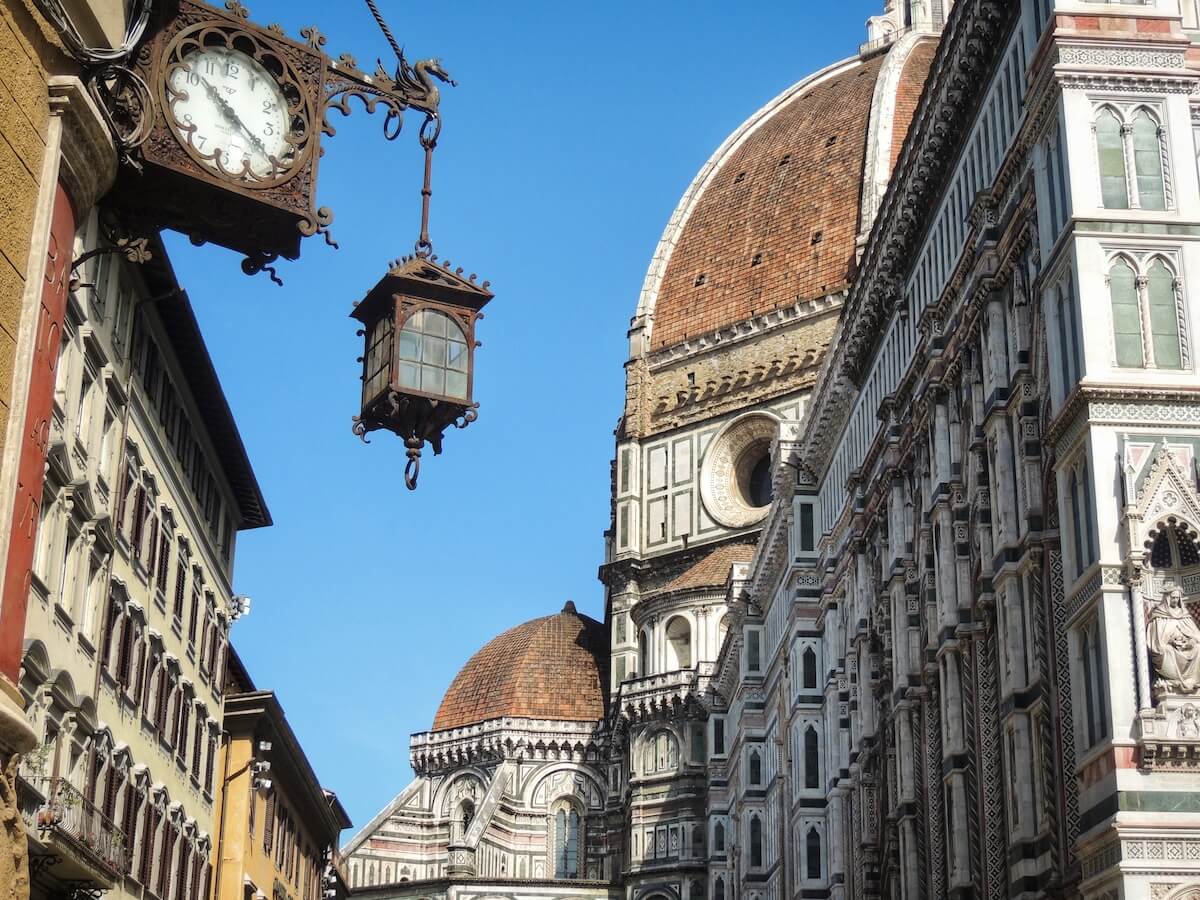 Our exploration of the Florence of the Medici begins in Florence’s magnificent Duomo, site of the attempted coup and the centrepiece of Florentine social and religious life for centuries. Whilst the extraordinary cathedral we see today is the brainchild of Brunelleschi, a site of Christian worship existed here long before his epoch-defining intervention. Head beneath the floor of the Duomo to explore the remains of the Early-Christian church of Santa Reparata, constructed according to legend in the early 5th century to commemorate a Florentine victory over the Gothic hordes of Radagaisus on the feast day of the eponymous saint.

Fast forward to the 1430s, and the finishing touches are being applied to Brunelleschi’s awe-inspiring dome crowning the new Cathedral. The dome's incredibly innovative double-shell skeleton was a unique departure in architecture, and resolved the technical problem of covering such a vast space that had seemed heretofore impossible. Take a peek inside the yawning cathedral  to gaze on beautiful artworks like Giorgio Vasari’s massive Last Judgement and Paolo Uccello’s painted monument to English condottiero or mercenary soldier John Hawkwood, commissioned by the grateful Medici in 1436 to honour services rendered to the city state. 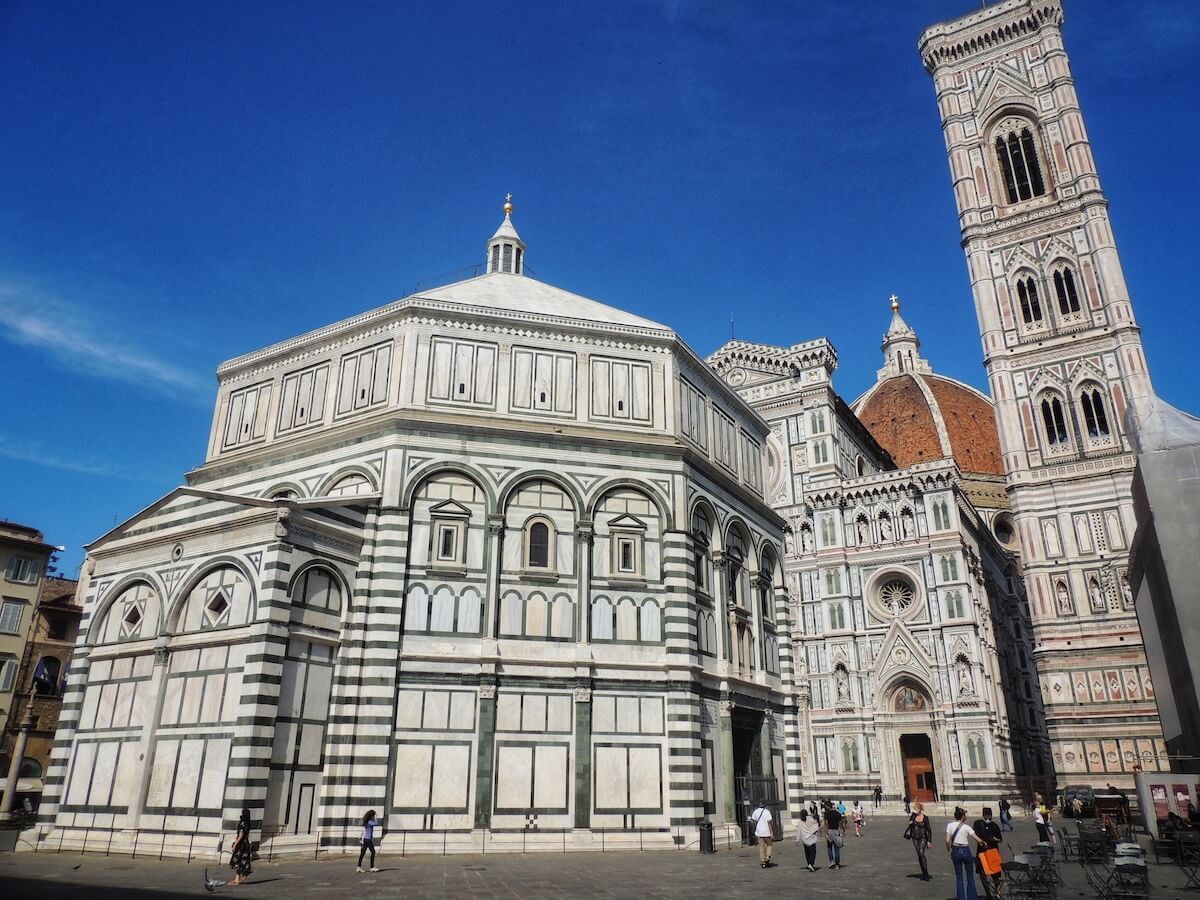 The Duomo isn’t the only landmark worthy of our attention in Florence’s main piazza. Apart from the beautiful campanile designed by Giotto to one side, the nearby Baptistery is home to some of the city’s greatest artistic achievements. Dedicated to Florence’s patron saint John the Baptist, the stunning octagonal edifice is one of the oldest buildings in the city. In 1401, a competition sponsored by the Merchant's guild to commission a new set of doors for building's northern entrance attracted the cream of the city's artistic talent. Lorenzo Ghiberti prevailed, and gifted to the world the incomparable ‘Gates of Paradise,’ amongst the most perfect examples of Renaissance sculpture ever produced.  No less impressive are the glittering golden mosaics within.

It was in these incredible surrounds that the great and good of Florence were baptised and so welcomed into the civic and spiritual fold of the city, including the poet Dante as well the Medici themselves. 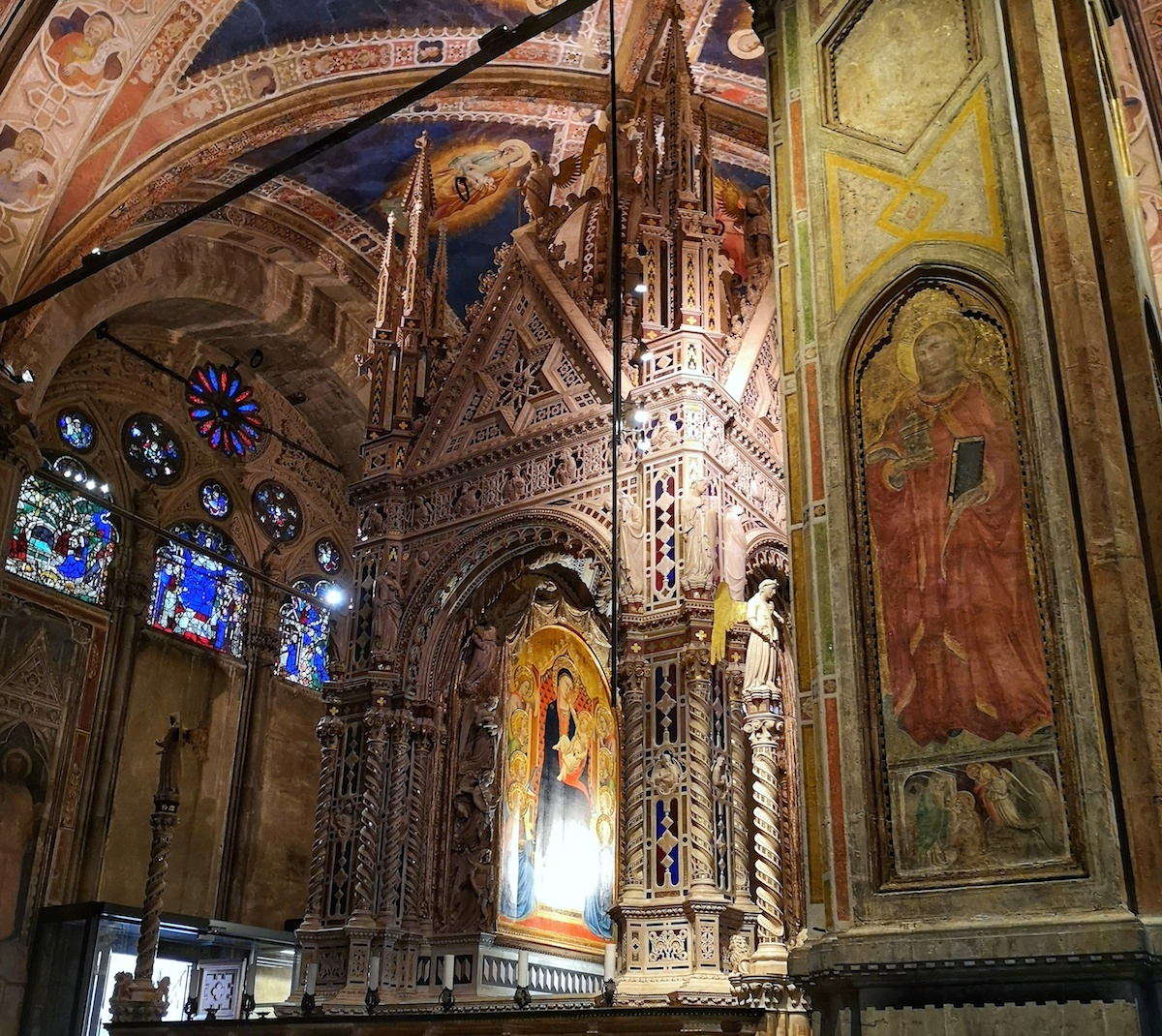 The city's powerful mercantile past is today a distant memory, but the history of Florence's guilds is an essential part of the city's rich tapestry of palaces, churches and piazzas. The guilds were keen to promote their self-image in Florence and beyond by commissioning lavish artistic projects such as the statues that ornament the façade of Orsanmichele, including Donatello's remarkable St. George. Originally a grain store and subsequently adapted for religious functions, inside Andrea Orcagna’s lavishly ornamented and architecturally complex tabernacle is breathtaking, possibly the most important Gothic sculpture in all of Florence. 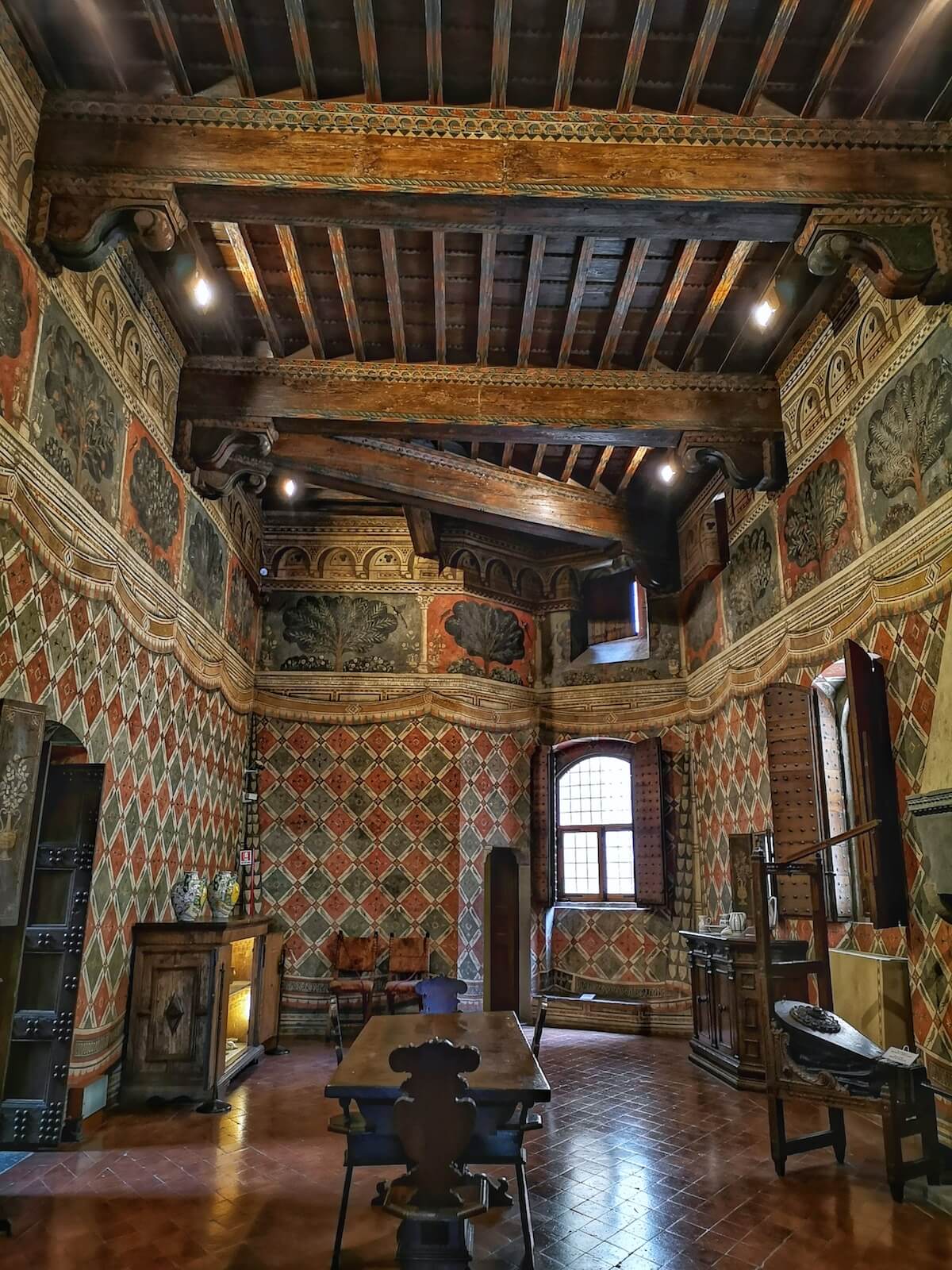 This burgeoning merchant class also built grand new residences to show off their wealth, residences such as Palazzo Davanzati. An imposing medieval tower converted into a spacious Renaissance townhouse unfolding around a beautiful central courtyard, the palace was purchased by the Davanzati in 1578 and transformed into a museum in the opening years of the 20th century. The palace offers a fascinating insight into the domestic world of the Italian aristocracy in the Renaissance, its magnificent frescoed rooms transporting you straight back to the intrigues of the 15th-century city.

Built by the Davizzi family, wealthy wool merchants who rapidly rose into the upper echelons of Florentine society in the 14th century, amongst its many highlights the palace's master bedroom stands out - the fascinating fresco cycle adorning its walls depicts a torrid love triangle between a medieval knight, his beloved and the wickedly lustful Duchess of Burgundy, perfectly reflecting the  learned courtly concerns of the Florentine elite during the Renaissance. 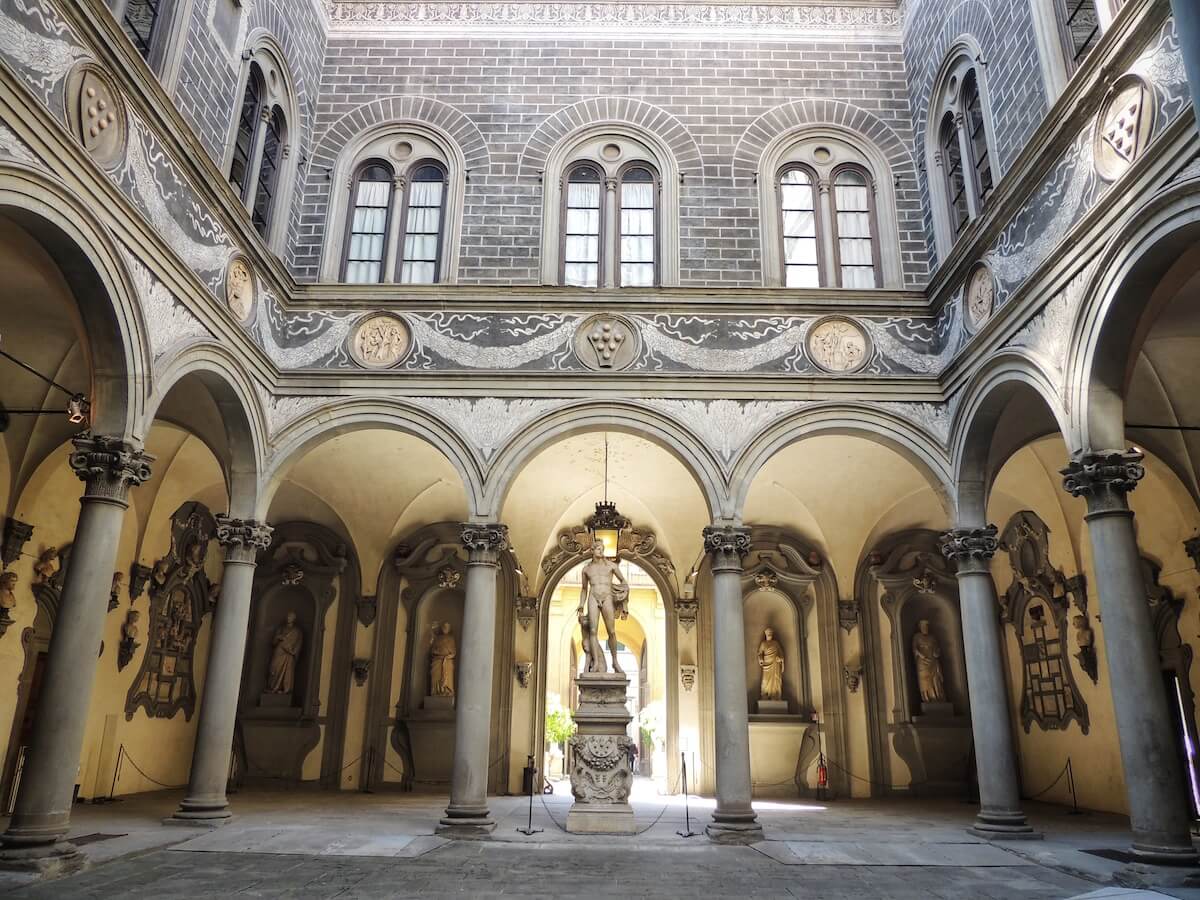 No trip to Florence would be complete without a visit to the home base of the first family of the Florentine Renaissance, the Palazzo Medici. Located in the heart of downtown Florence, from the outside this imposing edifice is equal parts palace and fortress: but step into the cool of its cortile and you'll soon find yourself in one of the city's most harmonious spaces.

One of the city's finest expressions of 15th century architecture, the palace was designed for Florence's most famous family by the architect Michelozzo. Whereas the palace's exterior presents a forbidding and fortified face to the populace, the space within is a fabulous arrangement of elegant arches supported by Corinthian columns, with a wealth of classical details showcasing the Renaissance enthusiasm for reviving the forms of antiquity.

The focal point of the courtyard makes the classicising aspirations of the commissioning Medici clear: Baccio Bandinelli's sculpture of the mythological hero Orpheus pacifying the three-headed dog Cerberus who guards the underworld with the strains of his lyre, in his quest to find his beloved Eurydice. For the self-aggrandising Medici, Orpheus' extraordinary ability to pacify the fearsome beast matched their own ability to quell the warring factions of the great city state. 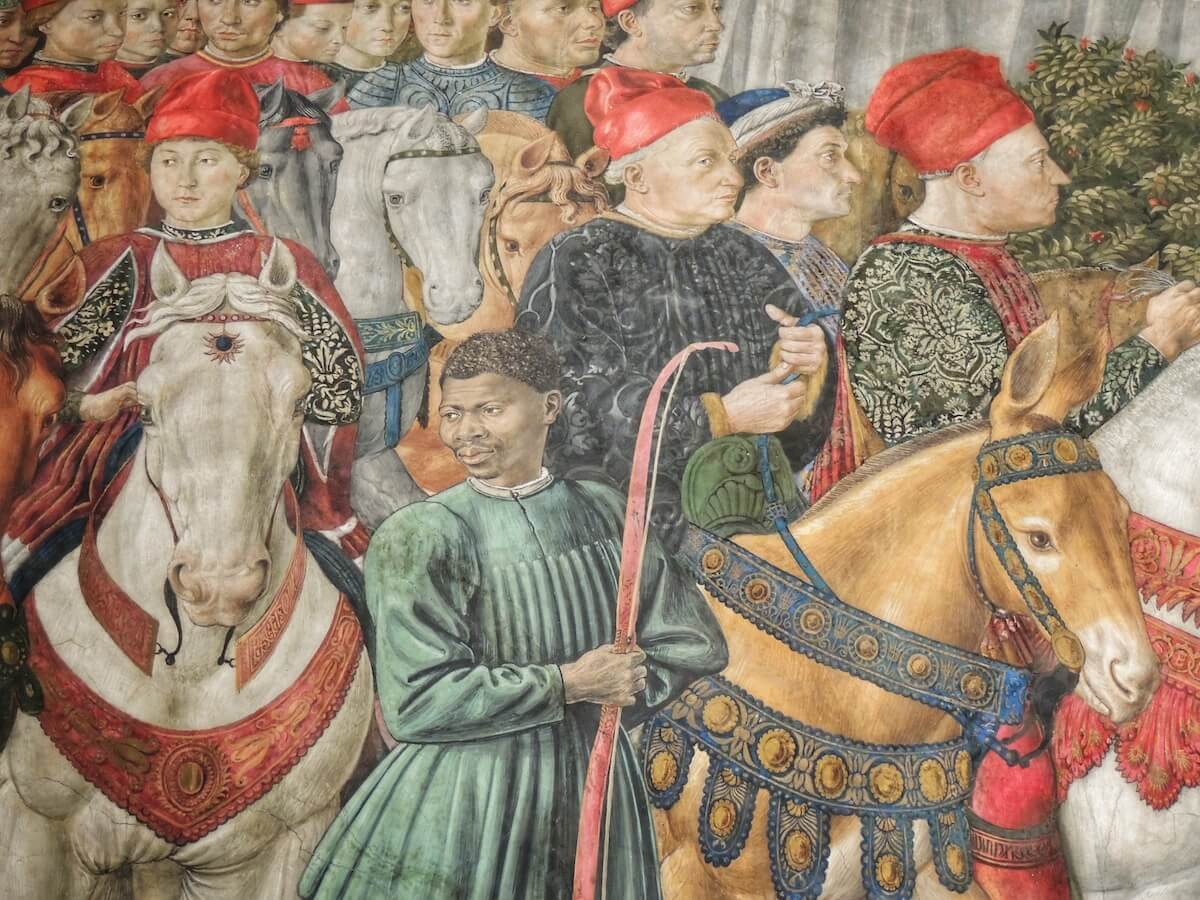 Make the climb up to the palace's piano nobile to encounter one of the great unsung masterpieces of Renaissance painting: Benozzo Gozzoli's Chapel of the Magi, where magnificent frescoes ostensibly depicting the biblical tale of the Adoration of the Magi in reality portrays the pomp and ceremony of the 15th century Medici court in all its glory. 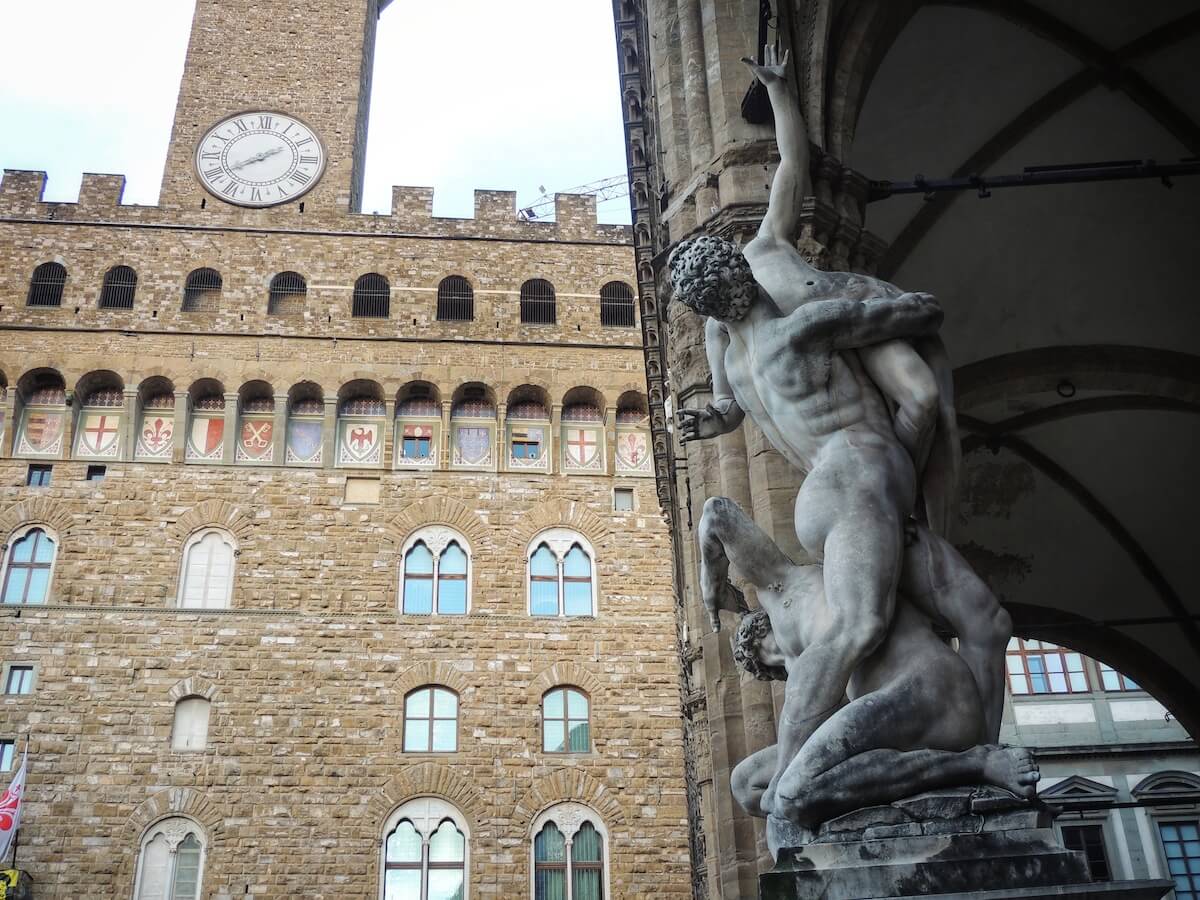 Spectacular as the Palazzo Medici is, for the unshakeably ambitious Medici it ultimately proved an insufficient symbol of their power. In 1540 Cosimo 1 decided to move the family’s main residence to the Palazzo Vecchio in Piazza della Signoria. During the years of the Republic this square was the greatest symbol of the city's democratic political ideals. It oversaw some of Florence's greatest controversies, such as the execution of the apocalyptic preacher Savonarola in 1498 and the erection of Michelangelo’s iconic David a few years later. The imposing 13th century Palazzo Vecchio itself was traditionally the seat of the city's magistrates, and boasts a 94 metre high tower visible all across the city as well as a stunning entrance courtyard.

These days the Palazzo is home to one of Florence’s finest museums, where you can admire statues by Michelangelo as well as enormous frescoes by Vasari commemorating the triumphs of Florence and the achievements of the Medici in the Salone dei Cinquecento. 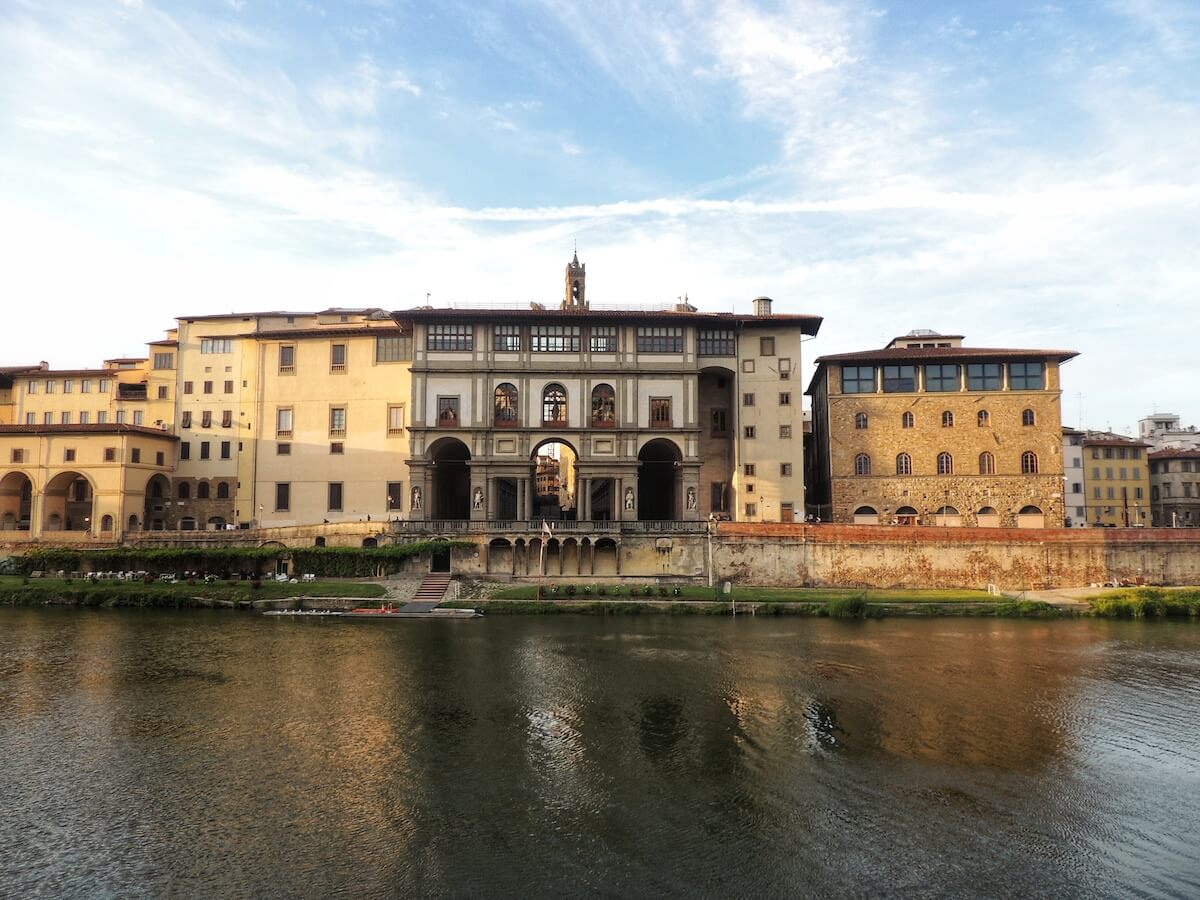 It is also to the Medicis that we owe the Uffizi gallery, the world's greatest museum of Renaissance art. Originally built to house the magistrates after their eviction from Palazzo Vecchio, the Uffizi soon became a showcase for the family's fantastic art collection. Here you can trace the fascinating story of Renaissance art through the forms of some of its finest masterpieces, from the pioneering works of Giotto and Masaccio to the superlative mythological canvasses of Sandro Botticelli. We will learn of the humanist philosophies that dominated the intellectual climate of the Medici court,  and meet the three greatest geniuses of the High Renaissance - Leonardo, Raphael and Michelangelo. Raphael and Michelangelo would leave for Rome at the height of their powers, drawn by the patronage of a series of fabulously wealthy popes intent on glorifying the Eternal City. 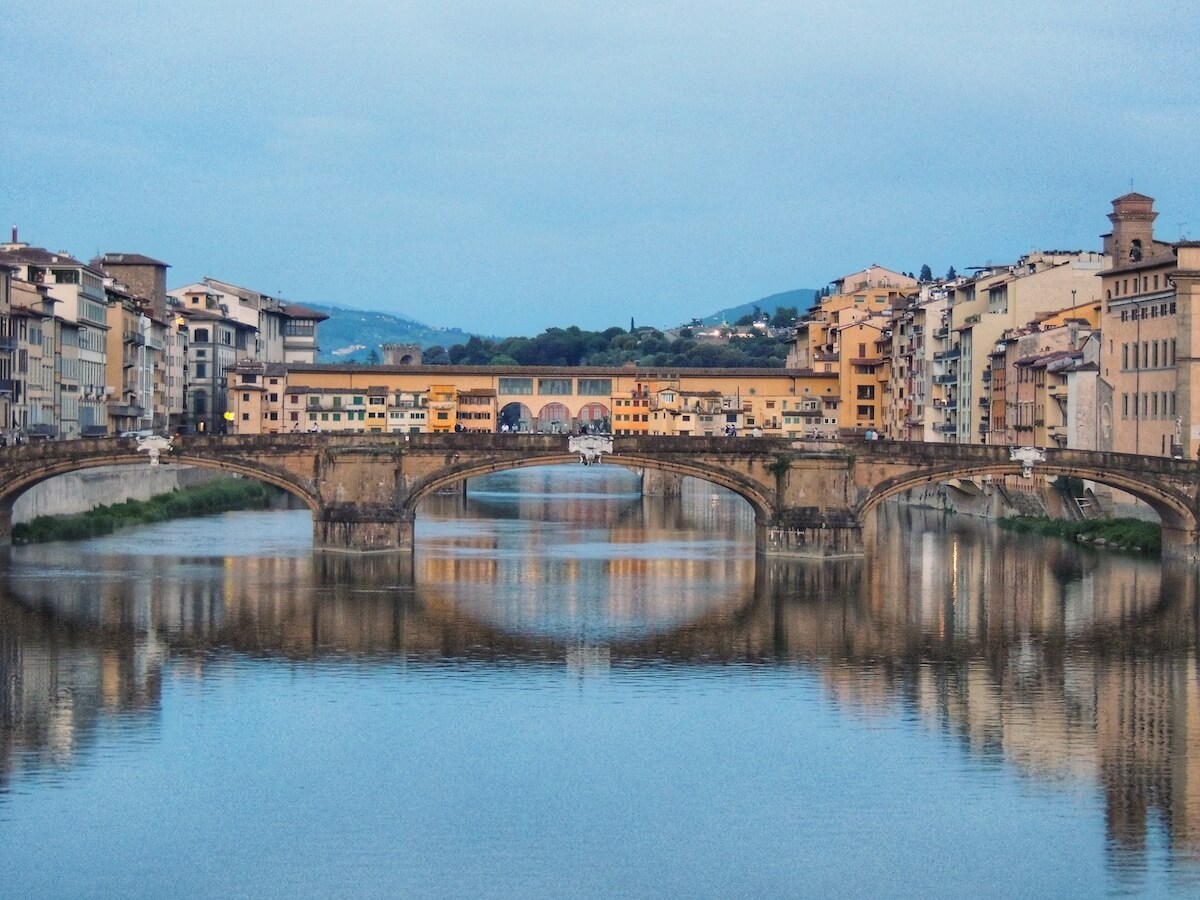 Our self-guided Florence itinerary concludes on the picturesque Ponte Vecchio, where Florence's mercantile and aristocratic pasts collide. For hundreds of years fish-sellers, butchers, and leather artisans plied their trade along its length. But the Medicis made their mark here, too. Upset by the smell and noise created by these plebeian trades, a 16th century Medici noble had them replaced by the more dignified goldsmith shops and jewellers that we still see today. 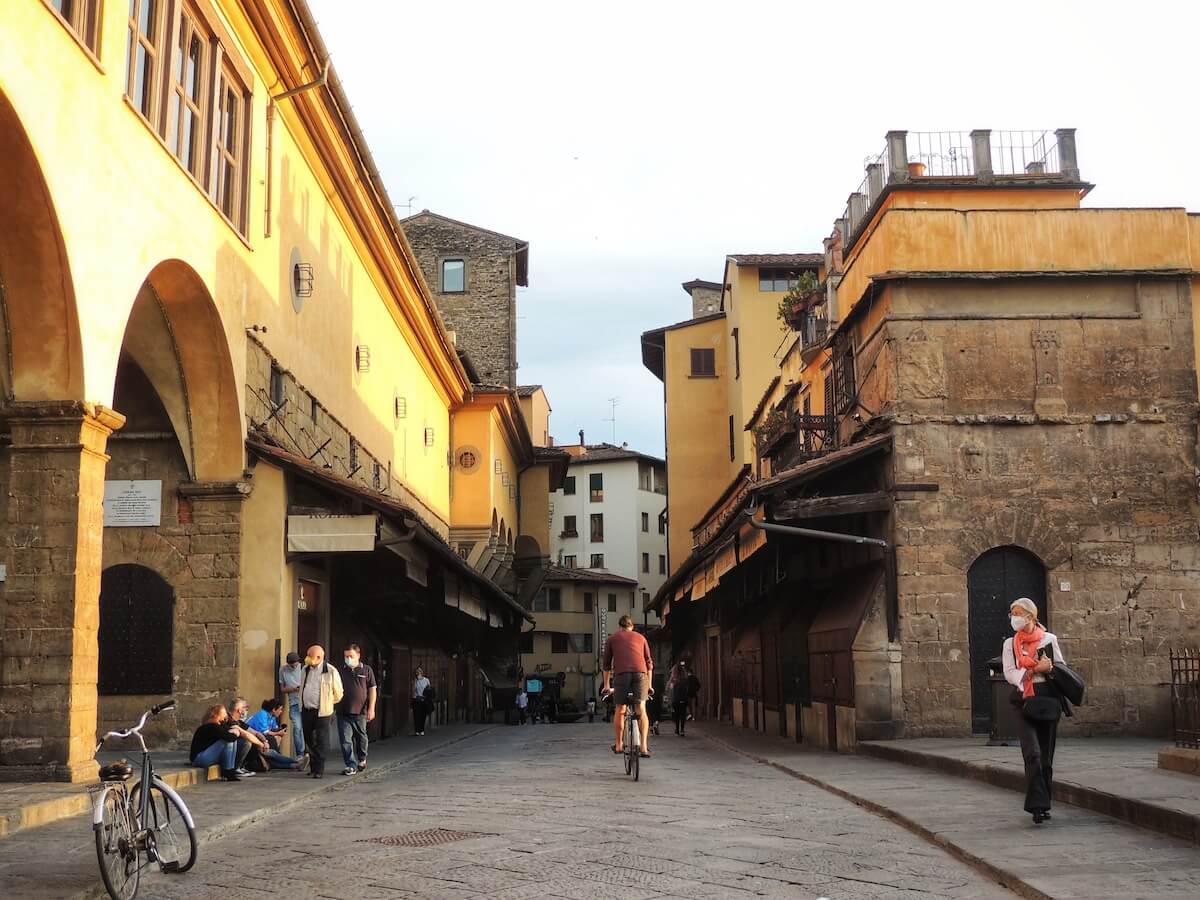 Through Eternity offers a range of Florence group tours and private tours of Florence, so if you’d like to visit any of the sites featured in our blog in the company of an expert capable of bringing the city to life, make sure to check out our website and get in touch with us today!