The 7 Most Unmissable Treasures of St. Peter’s Basilica 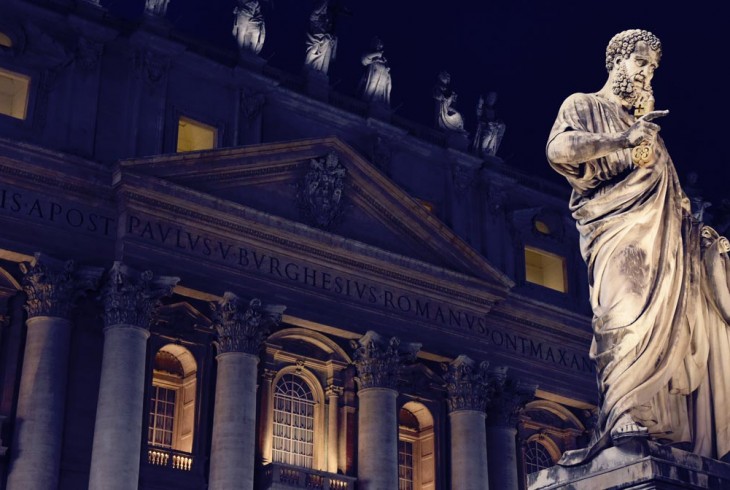 Saint Peter’s is a treasure chest that always capable of surprising its visitors, even the most experienced - perhaps with a hidden detail, a new perspective or just an unexpected lighting effect. You just can never get enough of this magnificent building. 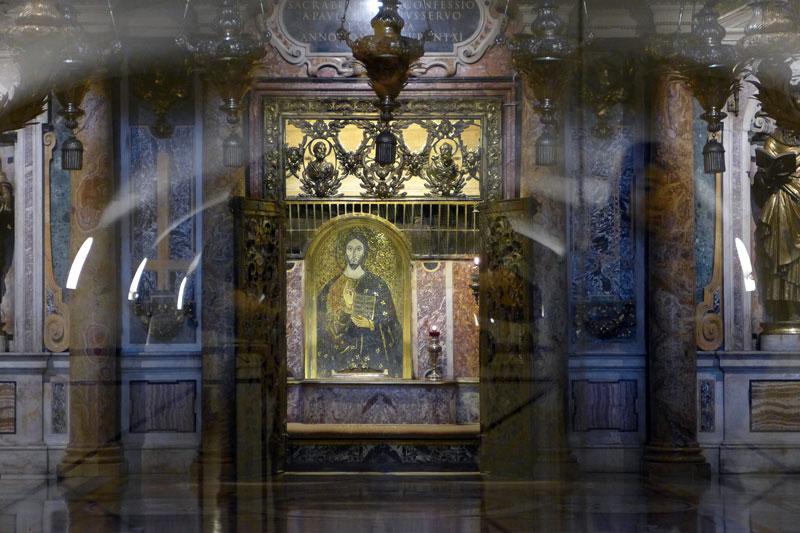 “And I tell you that you are Peter, and upon this rock I will build My church”. If you are familiar with the Gospel of Matthew, you’ll probably recognize this famous passage in which Jesus gives his apostle Simon, a humble fisherman from Capernaum, the new name of Peter - which literally means “rock”.

Saint Peter was martyred during the reign of the emperor Nero, around the year 67 or 68 AD, during the first persecution of the Christians. He was crucified upside down in the Circus of Nero, which was located in the exact same area where the Basilica and beautiful Saint Peter’s Square stand today. After his atrocious death, he was buried in a nearby cemetery. Saint Peter’s grave was originally extremely humble, and it was only in the 2nd century AD that Christians finally had the chance to build a little shrine over it to make it recognizable. Almost 300 years after Peter’s death, the emperor Constantine, after legalizing the Christian religion, had a proper church built on top of the apostle’s grave. This ancient Basilica was gradually demolished in 1506, when Pope Julius II ordered the construction of a newer and bigger church fit to honor the Apostle: this is the magnificent church we can still admire today. Finding the exact location of Saint Peter’s grave is simple: from the outside, the position of the grave is marked by the shiny golden cross on top of the dome. Inside the church meanwhile, it’s marked by the beautiful bronze canopy above the main altar. The altar itself sits right on top of a little chapel, underneath which lies the humble grave that is traditionally - although not unanimously - identified with Saint Peter’s burial. 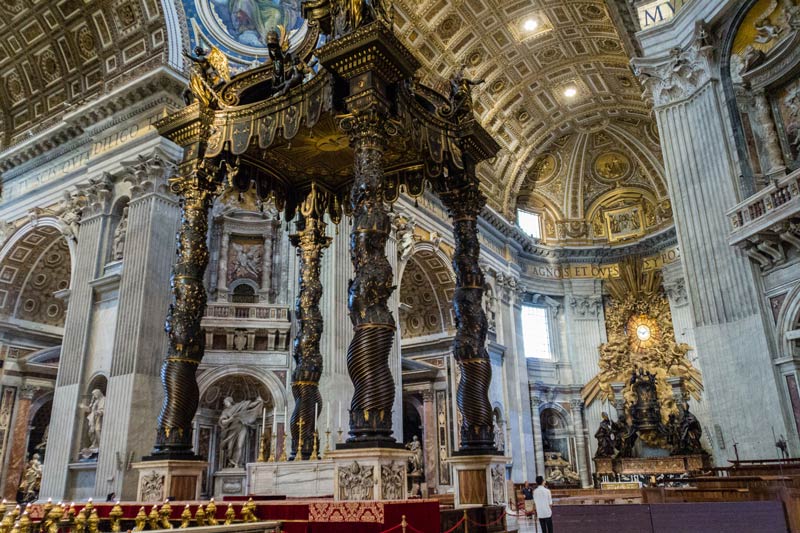 When entering Saint Peter’s Basilica for the first time, you can’t help but be overwhelmed by the unexpected grandiosity of the building. But once you adjust to the vastness of this immense church, the first thing that catches your eye is a huge bronze canopy at the end of the nave. Designed by Gianlorenzo Bernini, who is widely considered the master of the Italian Baroque, the canopy is meant to highlight the main altar, reserved only for the Pope himself.

It was the famous Urban VIII from the Barberini family, whose coat of arms is carved at the base of each of the four columns of the structure, who hired Bernini for this ambitious project in 1624.

With its beautiful spiraling columns decorated with vine leaves,  the canopy has a very peculiar design meant to suggest the idea of movement and lightness, remarkable considering the size of the monument: in fact, it is more than 28 meters high. Beautiful statues of angels and little putti gently watch you from the top of the canopy, which is surmounted by a golden sphere with a cross.

But where did all this bronze come from? Pope Urban VIII had pretty unorthodox ways of acquiring the materials he needed for his monuments: for the construction of the canopy, he took the bronze from more ancient buildings in Venice, Livorno and, according to tradition, even from the Pantheon in Rome. This tradition, although not confirmed by the most recent studies, is at the origin of the famous sentence “What the barbarians didn’t take, the Barberini did”.

Located in the first chapel to the right of the entrance, the Pietà is Michelangelo’s most touching work, representing the Virgin Mary gently holding the body of dead Jesus in her lap with great composure and tenderness. The work was commissioned by Cardinal Jean Biléres de Lagraulas in 1498, for his tomb.

In only two years, the 23-year-old Michelangelo was able to create a work that remains even today an unparalleled masterpiece.

The sculptor interpreted this well-known subject in his very personal and original manner: in fact, going against the traditional iconography where the Virgin Mary was portrayed as a mature woman, Michelangelo emphasized her youth and innocence at the point that she looks even younger than her Son. The Virgin Mary bears a sash across her chest, with the signature of the artist. As the tradition has it, Michelangelo, who was not yet so famous at that time, added it after the inauguration of the statue: apparently, he had overheard some visitors wrongly attributing the Pietà to another artist. After this statue, he became so famous that he didn’t need to sign any of his other works. 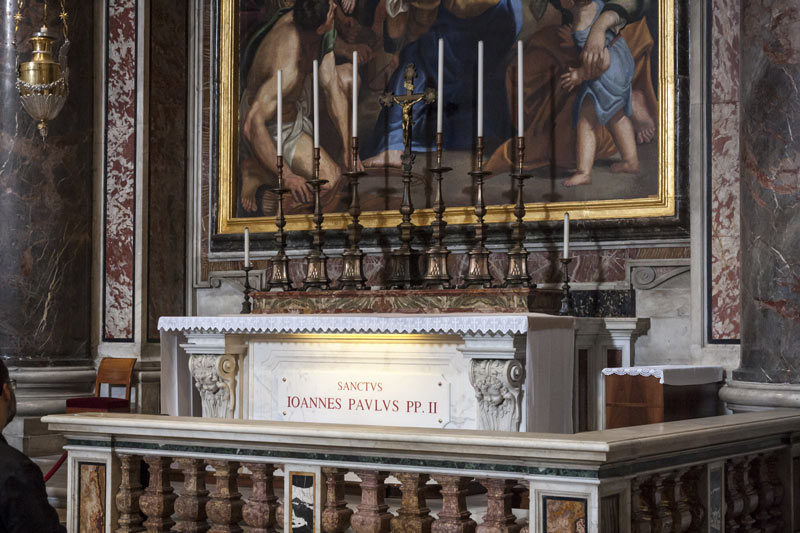 If you keep walking along the right aisle, a few steps past the Pietà, you will find the Chapel of Saint Sebastian. On most days you will find many people here on their knees, silently praying in front of the altar. If you manage to get closer, you will be able to read this inscription on the white marble altar, in red capital letters: SANCTVS IOANNES PAVLVS PP. II, Saint John Paul II. With his 27-year-long pontificate, the Polish pope was one of the most popular pontiffs ever: during his funeral on April 8th 2005 in Saint Peter’s square, the large crowd attending suddenly started to chant loudly “Santo subito!” which literally means “Make him a saint now!”. And in fact, just 9 years after his death Pope Francis proclaimed him a saint in Saint Peter’s Square on April 27th 2014, in front of the more than 500,000 people that had gathered for the occasion.

The pope’s triple coffin (one made out of cypress, one of zinc and the last of chestnut, shut with golden nails) was originally buried in the Vatican Grottoes. It was moved to the Chapel of Saint Sebastian in 2011, when the Pope was declared “blessed”: in 2014, upon his canonization, the pope was finally honored with the title of “saint” - as you can read on the beautiful marble altar that is his final resting place.

The monument to Pope Alexander VII 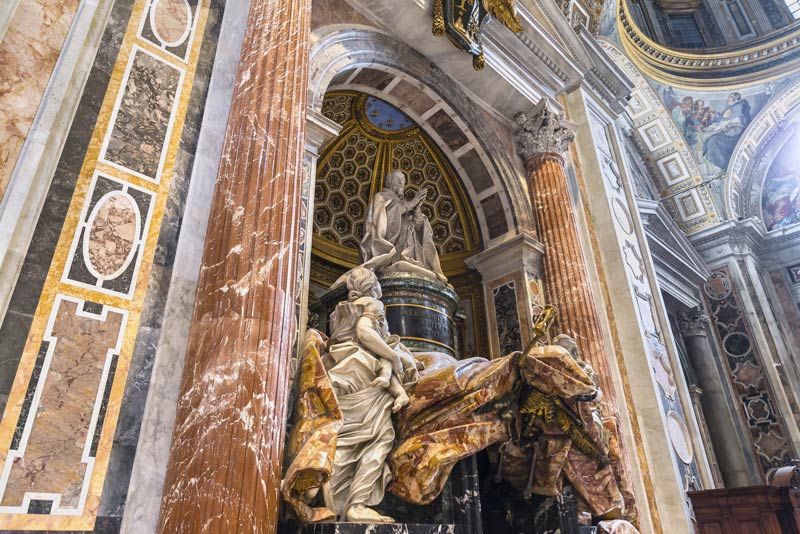 To the left of the Canopy, just a few steps away, you will find a very unusual monument: the memorial to Alexander VII. Designed by the 80-year-old Bernini, this monument is considered his very last great work, despite the fact that it was mostly executed by other sculptors supervised by the old master. Although Pope Alexander VII had commissioned his funeral monument in the very first years of his pontificate, he never got to see it, dying before it was even started. The monument was in fact inaugurated in 1678, six years after the pope’s death.

The monument shows the pope kneeling in prayer, surrounded by four statues of women, intended to represent the virtues that the pope used to practice most: Charity, Prudence, Justice and Truth.

The last one is particularly remarkable, as she hides an interesting political message from the 1600s: the Truth is setting foot on a globe, where you can easily recognize the different countries. If you go closer, you will notice that she is stepping precisely on top of England: this was Bernini’s subtle way to immortalize the pope’s doomed attempts to defeat Anglicanism.

But the most surprising detail of the monument is the winged skeleton who makes its creepy appearance from below a heavy marble drapery: the skeleton is Death herself, brandishing an hourglass as if to emphasize that the time of life is over.

The statue of Saint Peter 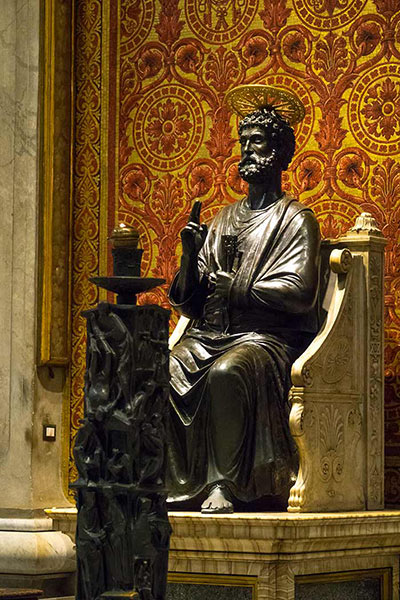 While walking along the nave, you might notice a line of people queuing in front of a black statue: if you look closely, you will notice that most of them touch a foot of the statue, and some even kiss it. Why? This is a very famous portrait of Saint Peter: the statue was long believed to date back to the 5th century AD, but is now almost unanimously attributed to Arnolfo di Cambio, a renowned Tuscan artist, who realized it towards the end of the 1200s. The statue is made out of bronze and represents the Prince of the Apostles, sitting on a marble chair. With his left hand he holds the keys of Heaven (his typical attribute), whilst giving a blessing with his right. It is customary for pilgrims visiting the church to touch or kiss Saint Peter’s feet, particularly the right one, and ask for a blessing. This tradition is so ancient that millions and millions of people must have touched and kissed the statue over the course of at least 800 years: that’s why Saint Peter’s foot seems strangely flat and thin (though very polished!) - it has been literally worn out by centuries of kisses. Every year, on the anniversary of the deaths of St. Peter and St. Paul, June 29th,  the statue is dressed in papal vestments and crowned with the tiara, a powerful way to remind everybody that Saint Peter was the first Pope in history. 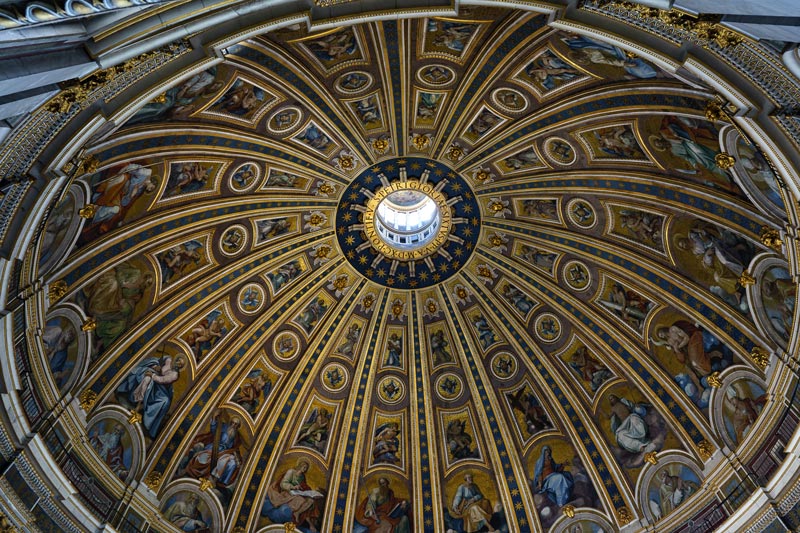 With its exceptional height and beautiful design, the Dome of Saint Peter’s Basilica unmistakably marks the skyline of Rome. Designed by none other than Michelangelo, the dome is considered his spiritual testament: he didn’t want to be paid for this last work as he intended it as a gift for the Church. The artist, who was also an excellent engineer and architect among his many other talents, was already in his seventies when he started working at this project: unfortunately, he never saw it finished, as he died aged 89 in 1564, when the dome was only partially built.

The construction of the dome, still the biggest in Rome, was completed by Giacomo Della Porta and Domenico Fontana in 1590; it was topped by a beautiful golden globe with a cross, very similar to the one you can find on the canopy.

From the inside, the dome looks even more spectacular: the interior was beautifully decorated with shiny golden mosaics at the very end of the 1500s by renowned artists such as Cesare Nebbia, Paolo Rossetti, Giovanni de’ Vecchi and the Cavalier d’Arpino.

At the base you will see four rounded medallions with the portrait of the four Evangelists, each accompanied by his animal symbol: John with an eagle, Matthew with an angel, Luke with a bull and Marc with a lion.

The interior of the dome is illustrated with many holy figures: at the top Godfather is surrounded by the angels, while, from the top to the bottom, we find Seraphims, Cherubs and other angels, some of them carrying the instruments of Christ’s passion: the crown of thorns, the cross and the column to which Jesus was tied when He was whipped.

In the lowest section you will also find Jesus, the Virgin Mary, John the Baptist, Saint Paul and the Twelve Apostles and, further below, portraits of bishops and Patriarchs - for a total of 96 characters overall.

At the base of the dome you can read the beautiful inscription “Tu es Petrus et super hang petram aedificabo ecclesiam mean et tibi dabo claves caelorum” (You are Peter and upon this rock I will build my church). Due to the enormous scale of the building you would never guess that each letter is almost 3 meters high!

Butt you can see so for yourself if you are willing to climb the 551 steps that will take you first to the base of the dome, from where you’ll be able to have an unparalleled view of the inside of the basilica, and finally to the very top, where you can enjoy a spectacular panorama of the Eternal City.

These are just 7 of the many incredible attractions that Saint Peter’s Basilica has to offer: join us on our Vatican Tours and see for yourself!